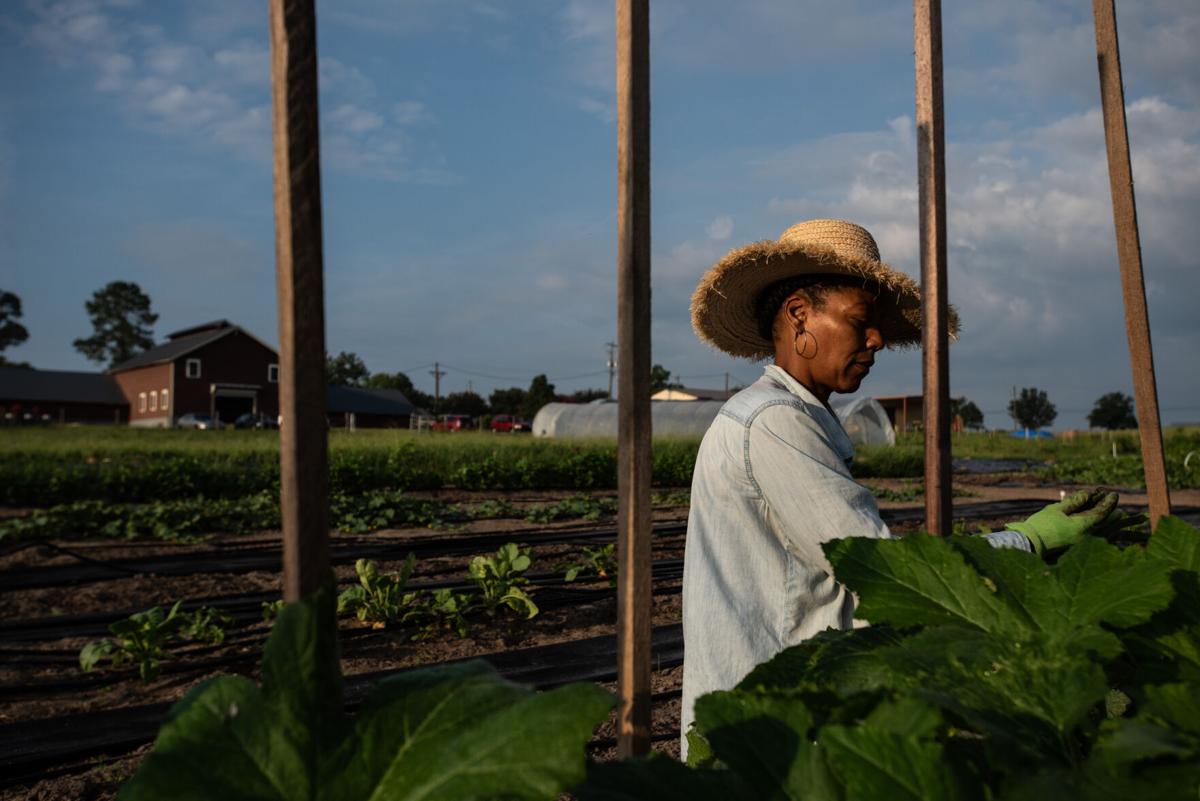 Thomasena Hoefer-Laudmon picks squash on a plot run by FarmaSis, a group of 11 female farmers participating in an incubator program at the Clemson Extension in Columbia. 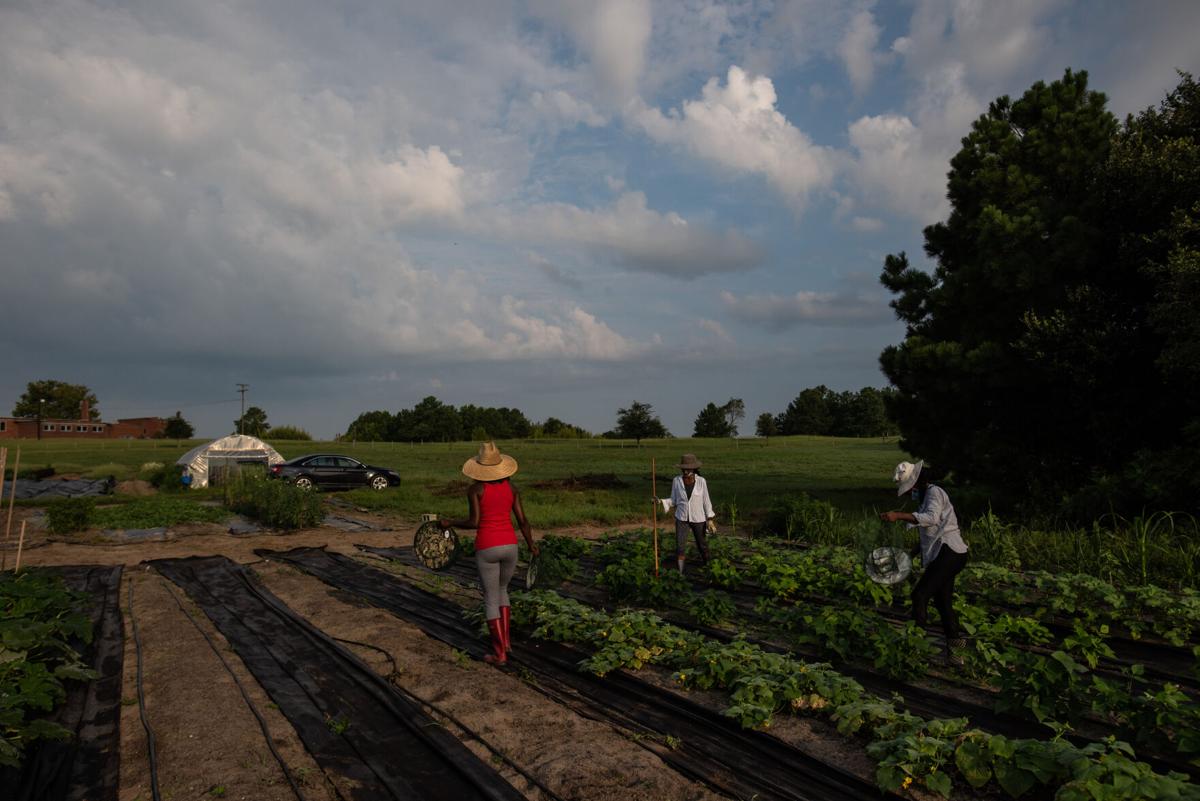 The goal of FarmaSis is to empower black women through learning farming/gardening techniques that they can take back to their communities. 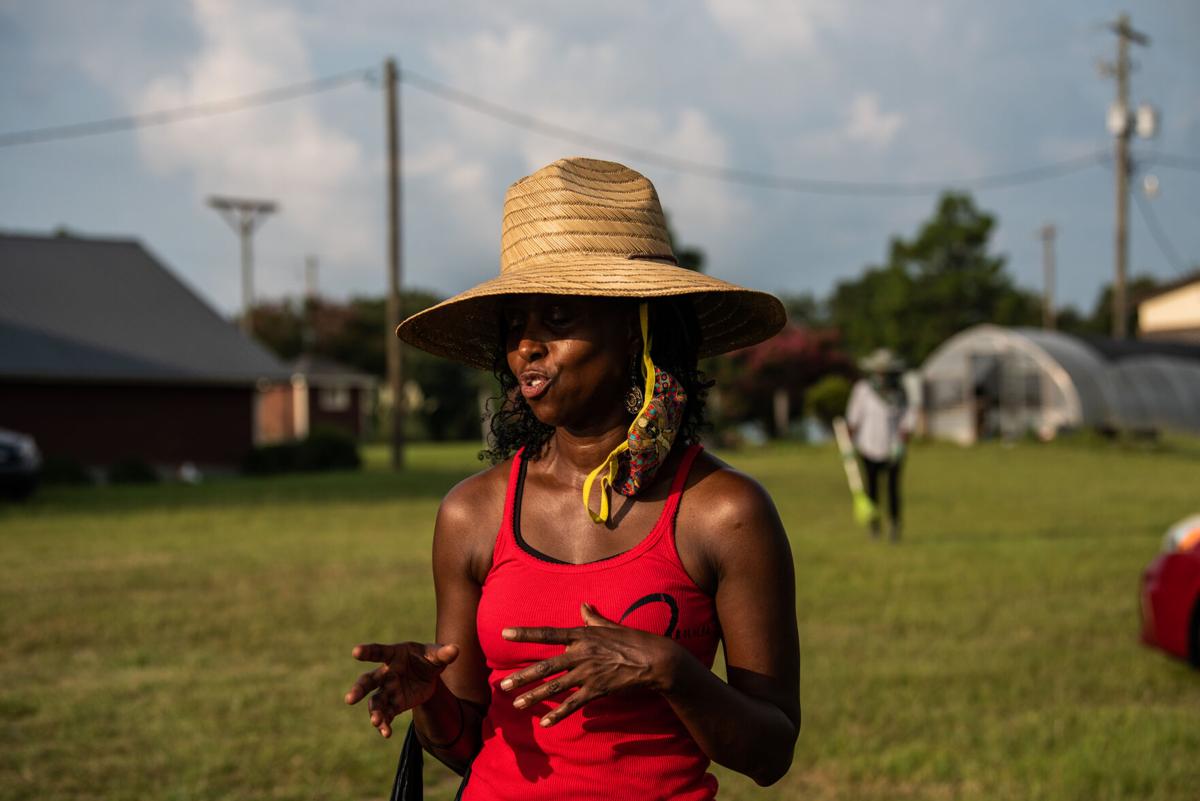 Bonita Clemons, founder of FarmaSis, explains her philosophy for the project. 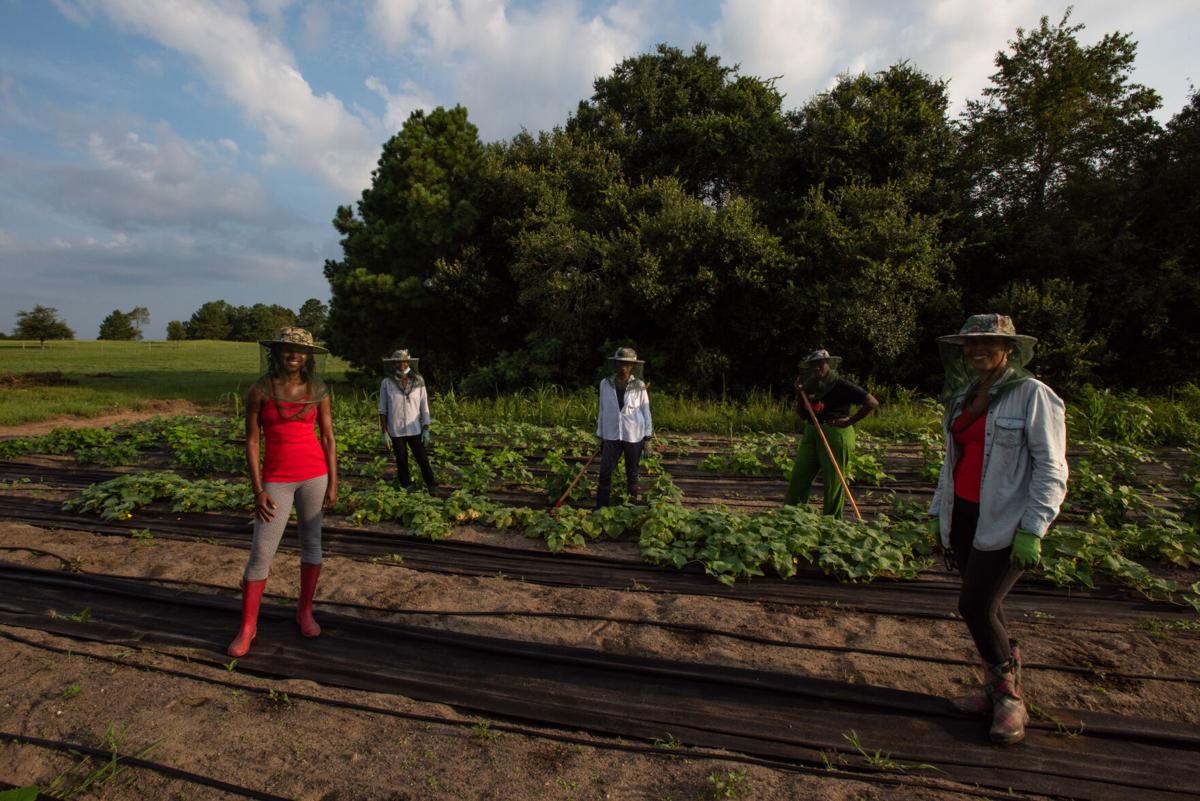 Bonita Clemons arrived at her farm group’s plot bearing gifts. Four members were already there, picking weeds out of the rows of squash and other produce or repairing leaky drip lines.

“Good morning ladies,” Clemons, the group’s founder, greeted them. She opened a bag full of camouflage-patterned net hats, designed to keep recently pesky gnats away, and dispersed them to her compatriots.

“We are an army! We don’t kill, we heal!” Clemons proclaimed, inspired by the camouflage. It quickly became the morning refrain.

The last four years have been a learning experience steeped in dirt for Clemons and the rest of the 10-member group FarmaSis, which operates at the Clemson Incubator Farm in Columbia. The all-Black women organization’s purpose is to empower women while addressing gender disparities in farming and to promote better health by providing produce and teaching members how to do so.

The disparities the organization is addressing are longstanding in the Palmetto State. Per the most recent USDA agriculture census in 2017, in South Carolina, 12,559 farms had women as producers (decisionmakers on their farms), compared with 22,412 men. By race, Black farmers made up 7 percent of producers in the state in that survey.

Clemons and the group have long-term aspirations, too. They hope to take on a trainee-to-trainer model, with each of the 11 going back and train other women in the trade, cultivating an emerging group of local farmers. The group also has plans to bring in 10 new women in January, while Clemons plans to start a similar group in Anderson.

“I have three goals: The first goal is to work collectively as Black women to show that we can work together. No. 2, that farming will create health for you,” Clemons explained. “The third goal is economic growth, sustainability. Once we learn to grow, we feed ourselves and our family, then we sell to the community.”

The members had various previous experiences in gardening — from backyard gardens to container gardens — but since beginning their work under the auspices of Clemson University’s farm incubator program they’ve become part-time farmers. At present, they collectively work at least 40 hours a week at the farm.

It’s hard work, they acknowledged, but worth it.

“Women as leaders of the household, you start there, we’re going to feed our families,” said member and lead grower Thomasena Hoefer-Laudmon. “(It’s) the same as the whole concept of teaching women how to learn to grow their farm. That is to raise a healthier family.”

Hoefer-Laudmon, who will lead next year’s group, said she gardened before joining, but through joining FarmaSis, she’s learned more nuanced aspects of market gardening, greenhouse gardening and the relationship between a seed and its soil. A self-described introvert, she said the group has helped her become a better, more vocal leader.

The experience has also helped prepare twin sisters Lauretha Whaley and Teresa Wilson to plan for how to handle the family farm they will likely inherit in the future.

“(Joining) was something new as far as being with a group of women on [the] land,” Wilson explained. “I saw no negatives in it at all. … [Being] women we don’t have negativity in our group.”

It's been a twisting path to get to work at the half-acre plot. For the first 2½ years, FarmaSis’ members worked at community farms throughout Richland County and met weekly at each other's homes.

Early meetings found the group sharing a vegetarian meal, and Clemons would often have agriculture speakers come in for further education. The experience helped them grow into a close-knit group. Clemons joked that they’re married to each other.

“We have this amazing sisterhood of 11 women. We have plants (we) grow. We literally and theoretically grow together,” Clemons said.

Their delayed official start at Clemons’ incubator farm stems from a switch in the farm’s leadership, program manager Cody Bishop explained. A former manager initiated the program in 2014, when farm incubator programs were trendy and beginning to emerge, but he later left for a new job.

When Bishop stepped into the position in 2017, he inherited the farm incubator and it took time to rally it back into action. It was a learning curve for Bishop, a row-crop-trained farmer, too, as he adapted to the various types of farms being started.

The program gives prospective farmers access to a half-acre plot for three years, along with various equipment, and is intended to include educational components.

“We try to find someone interested in becoming a small farmer and has the passion and drive,” he explained. “(We) basically give them the building blocks.”

FarmaSis joined two other groups utilizing plots, of which there are eight, with a fourth occupant soon to follow.

Clemons’ effort stands out from the others — a commercially focused produce seller and a flower seller — with its demographic focus and educational aspect, Bishop posited. That’s a good thing, given the way home gardening is taking on increased prominence with the ongoing COVID-19 pandemic.

“I think they’re in the right direction of taking a lot of stuff that they learn back to their communities where they live in,” he said. “I think it's a great thing they were able to get their feet in the ground before a lot of this took place so they kind of have a jumpstart on how to do things.”

Of course, FarmaSis’ overarching goals would be prescient in Columbia regardless of coronavirus, as several areas with predominantly minority populations are what many would call food deserts, as they continue to struggle with access to fresh and healthy food.

And after a year on its plot, the group has been able to directly address this. Clemons is involved with the Rare Variety Vegan Cafe, which converted a portion of its space into a produce market during the pandemic, and has sold some of its goods there. The cafe sits on North Main Street, a food desert close to downtown Columbia.

And while it's a fantasy to imagine enough people getting access to a half-acre plot or farm inheritance to truly solve these food access issues, Clemons and other members said that home gardening is still an effective tool to combat this difficulty on an individual level.

“It has an economic effect, a health effect,” Clemons said. “Growing changes the game.”