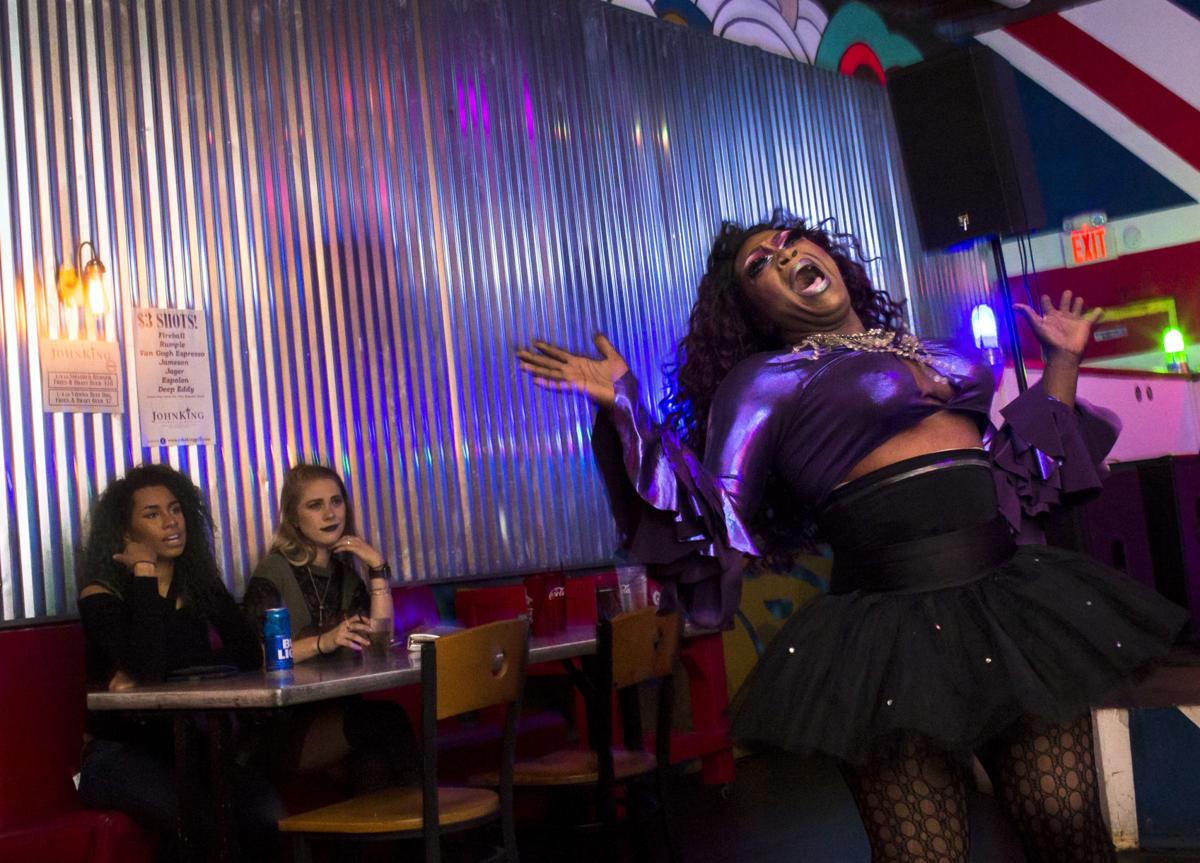 Diamond Giovanni throws her hands back while dancing to music during a drag show performance at JohnKing Grill & Bar on Thursday, May 3, 2018 in downtown Charleston. Andrew J. Whitaker/ Staff 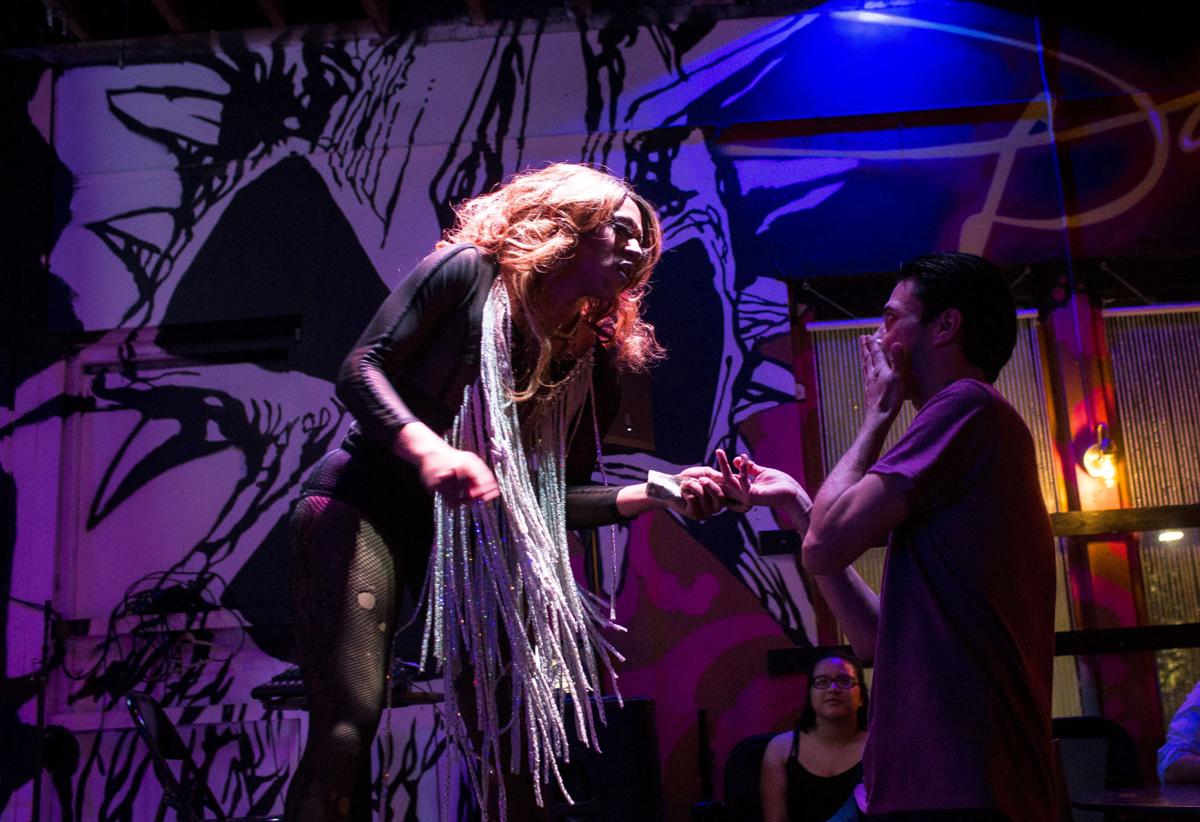 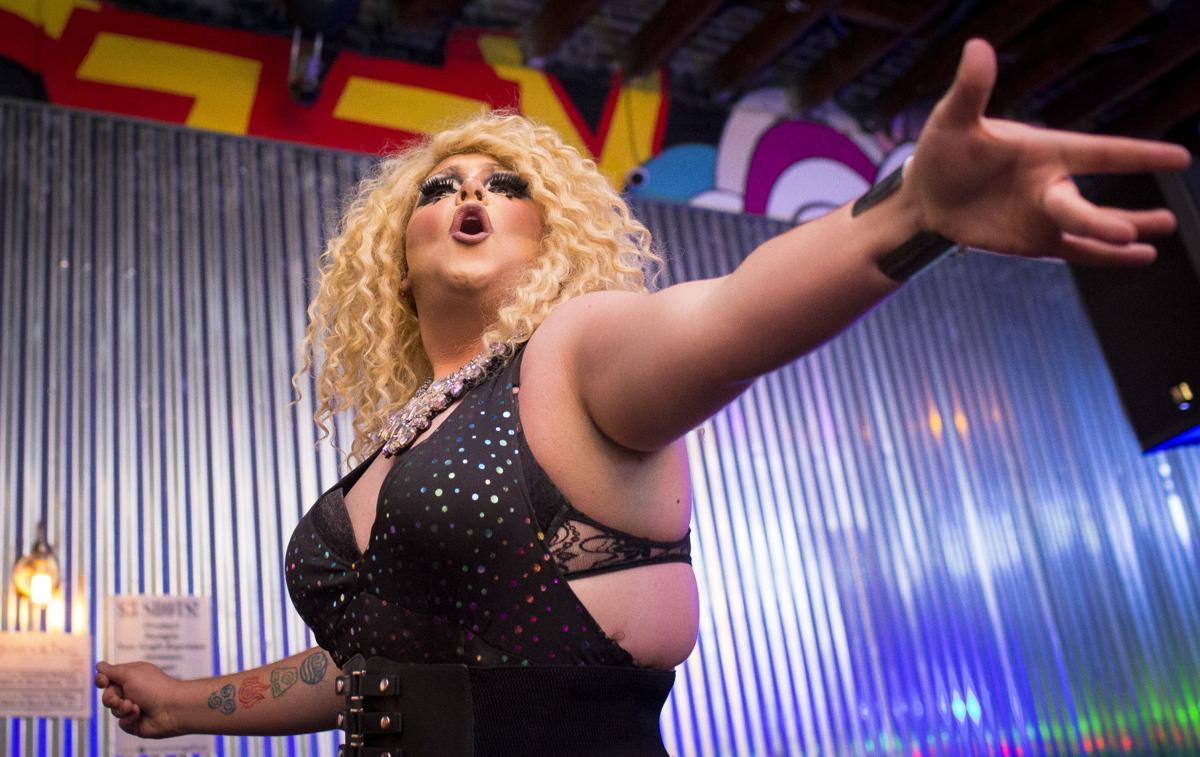 Jaclyn Hoff reaches out and sings in her performance during a drag show performance at JohnKing Grill & Bar on Thursday, May 3, 2018 in downtown Charleston. Andrew J. Whitaker/ Staff 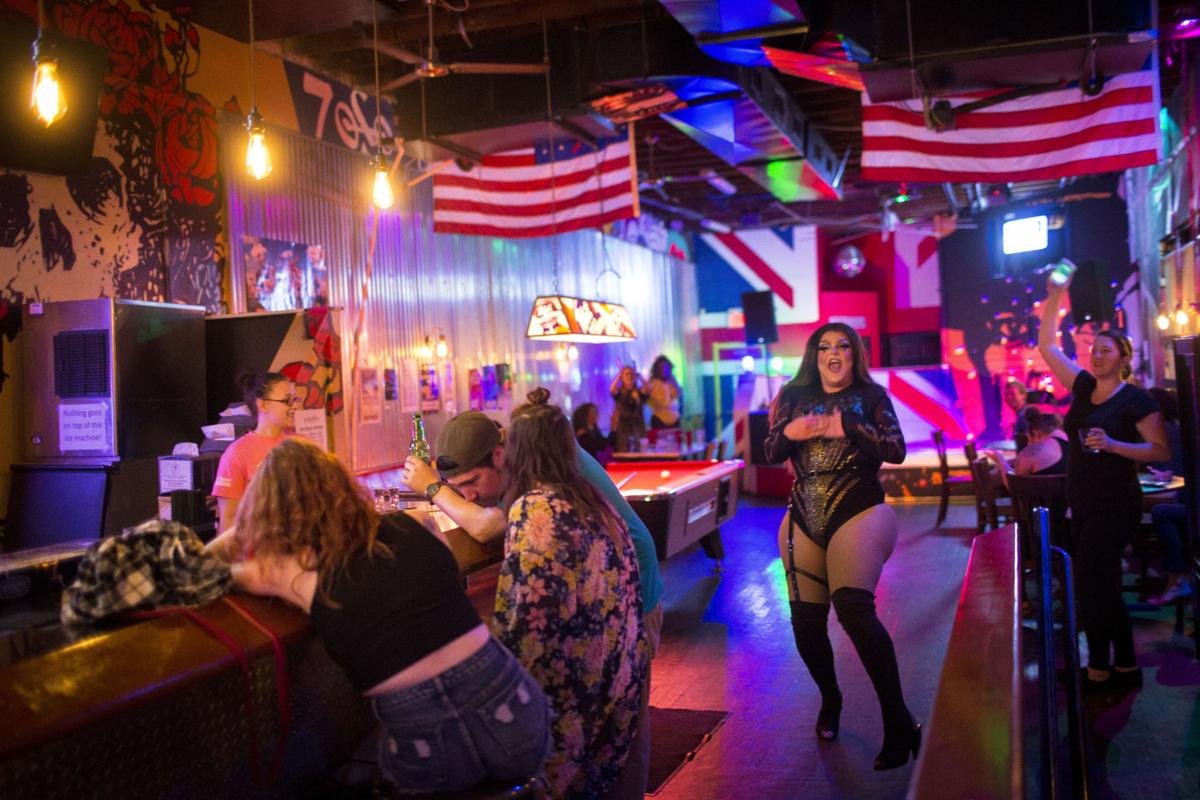 Jaclyn Hoff dances around the bar during a drag show performance at JohnKing Grill & Bar on Thursday, May 3, 2018 in downtown Charleston. Andrew J. Whitaker/ Staff 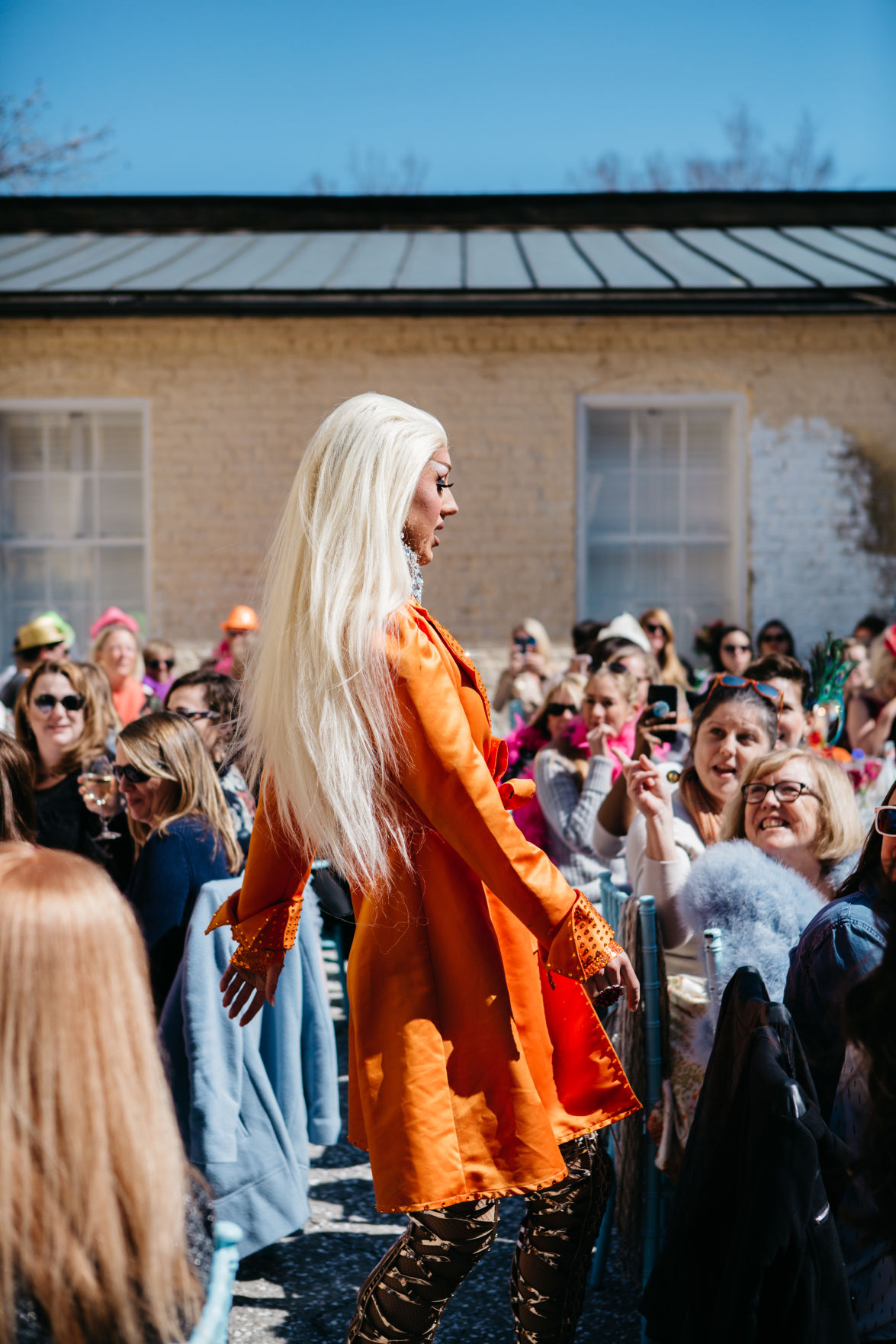 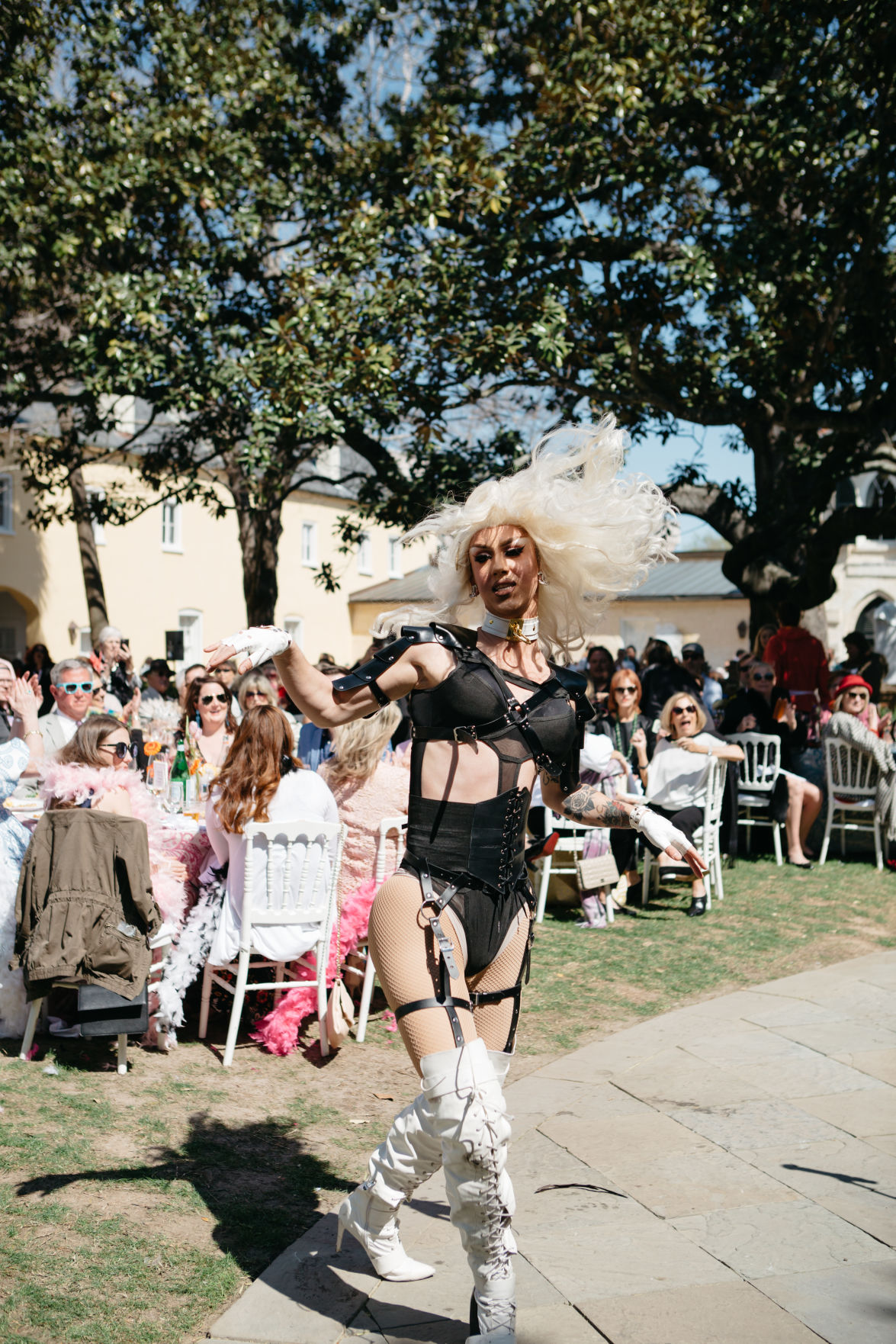 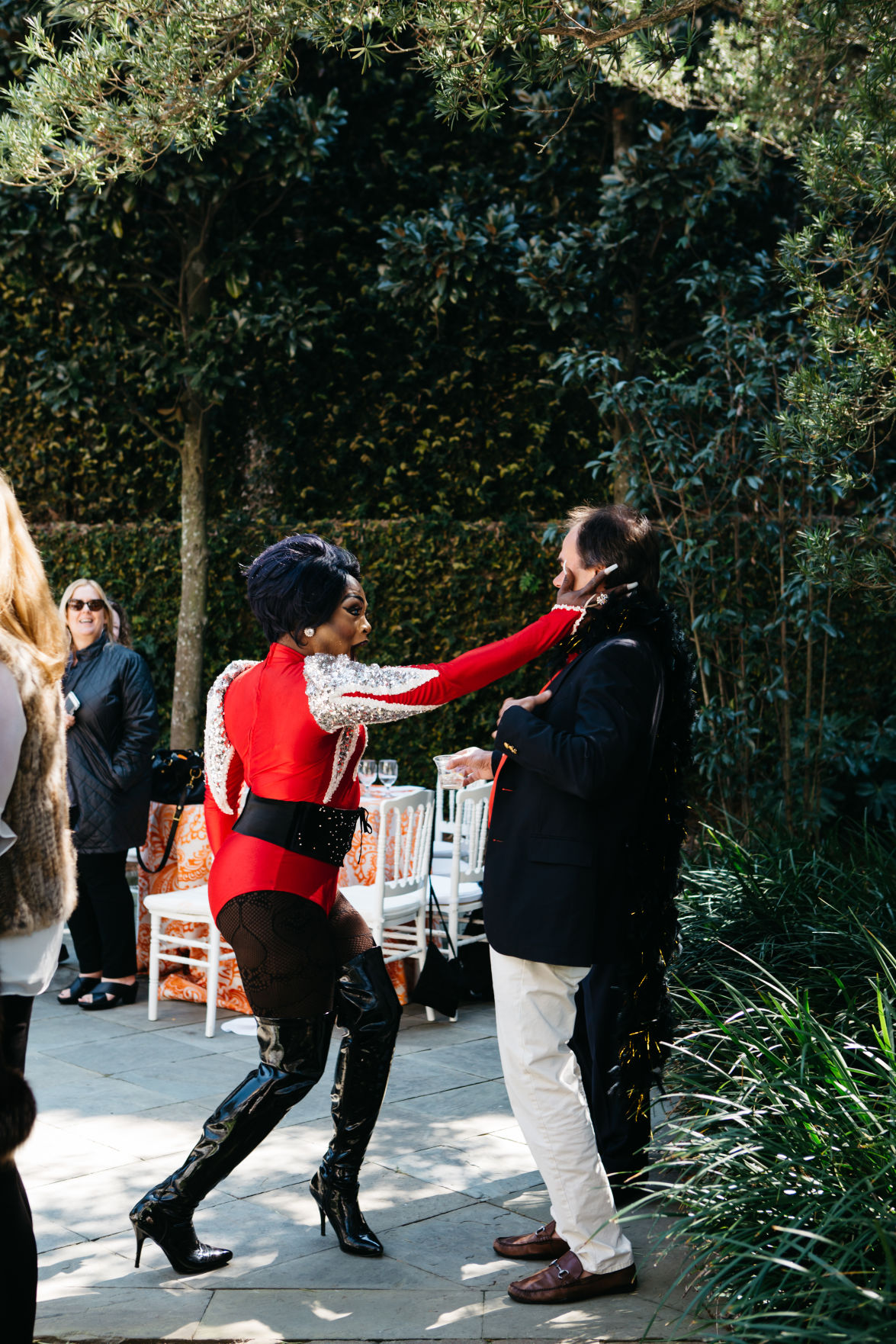 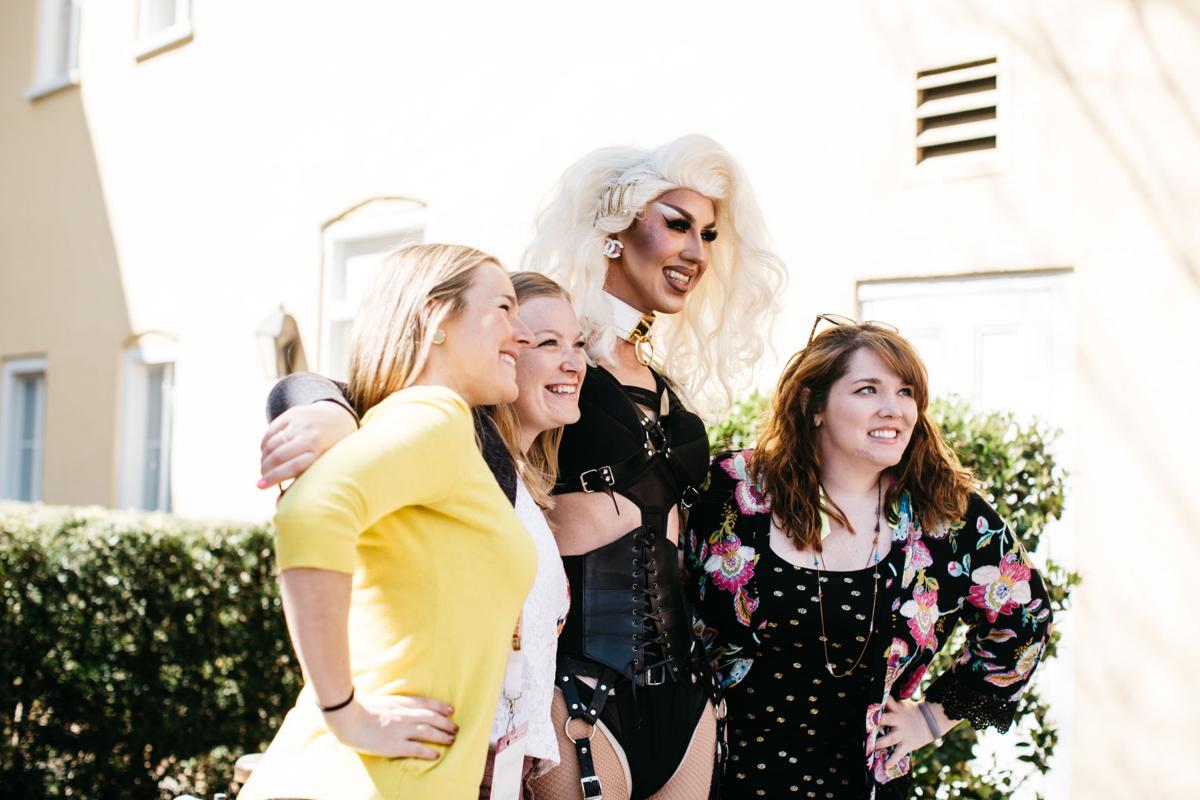 Diamond Giovanni throws her hands back while dancing to music during a drag show performance at JohnKing Grill & Bar on Thursday, May 3, 2018 in downtown Charleston. Andrew J. Whitaker/ Staff

Jaclyn Hoff reaches out and sings in her performance during a drag show performance at JohnKing Grill & Bar on Thursday, May 3, 2018 in downtown Charleston. Andrew J. Whitaker/ Staff

Jaclyn Hoff dances around the bar during a drag show performance at JohnKing Grill & Bar on Thursday, May 3, 2018 in downtown Charleston. Andrew J. Whitaker/ Staff

For at least one sunny sliver of this year’s Charleston Wine + Food Festival, the star of the event was neither a chef nor a bartender, but a lip-syncher dressed in green feathers and knee-high black leather boots.

Monica Van Pelt, an iconic Atlanta drag performer, emceed Queens on King, a first-of-its-kind festival program featuring half a dozen drag queens shimmying, sashaying and dramatically contorting between two outdoor stages at The William Aiken House. Before the brunch, an organizer warned her that he had no idea how the natty crowd would respond. “These people have never done this,” Tyler King said. “Don’t look for those handfuls of money.”

King, the general manager of Lips Atlanta, which bills itself as “the ultimate in drag dining,” had immediately gotten on board when the festival invited him to put together a lineup for Queens on King. But he admits his excitement was blotted with fear.

“I was really, really worried that nobody would be interested,” he says. “I’ve been visiting Charleston for 25 years and it’s one of my favorite cities, but I know it to be fairly conservative, and I thought this could really go the wrong way. I was really worried that some group like Westboro Baptist Church would be there to picket and protest.”

Onlookers did congregate on the sidewalk, just as King imagined. And then they pressed their faces hard against the wrought iron fence, hoping for a better view of the queens.

“I kid you not: The people just embraced it,” King says.

Paying customers let their sausage turnovers and bread pudding Monte Cristos grow cold as they clapped and hooted. King had completely misread the audience: Without much prompting, attendees in pastel blue suits and hot pink dresses lobbed singles at Van Pelt as P!nk’s “So What” played.

“Queens on King may very well be my favorite event of any festival that I have ever produced,” the festival’s executive director, Gillian Zettler, said later. “This event proved that food can be the foundation to draw people together (and) open people’s hearts and minds, while creating an atmosphere of pure joy.”

More prosaically, it also proved that people will shell out good money for drag-and-dining experiences, a fact that wasn’t lost on restaurateurs in an increasingly competitive local market. The sold-out brunch inspired a flurry of Charleston bar and restaurant events featuring drag queens: In the two months since the festival, Edmund’s Oast Brewing Co. has hosted Divas on Tap, Pancito & Lefty has offered Drag Disco and JohnKing Bar & Grill has introduced Drag Bingo Night.

“You know you’ve made an impact when people start sending you angry messages,” says King, who was chided on Facebook by Charleston drag queens. “How dare you call yourself a trendsetter?” they asked. “Drag and dining have been in Charleston for years before you ever came to this city.”

To be clear, King never called himself a trendsetter. But something in the scene has shifted, and performers aren’t the only ones grappling with the implications. What does it mean when an art form with political and cultural significance becomes the standard backdrop for eggs Benedict? Is it progressive or regressive when queens clown around for bachelorettes? With drag, it seems, nothing is ever quite as it appears.

Drag, according to New York University drag historian Joe E. Jeffreys, is “anytime that someone is putting on clothing that is considered to be not appropriate to them, and then wearing it with some type of ironic distance.”

In other words, drag began when humans started wearing clothes. To discuss drag in the 21st century, though, is to discuss RuPaul.

RuPaul has been a mainstream public figure for 25 years, dating back to the release of his single “Supermodel.” Yet nothing in his career has been as influential as RuPaul’s Drag Race, a reality competition first produced in 2008 for gay lifestyle network Logo. Now airing on VH1, the show regularly flirts with viewership numbers approaching 1 million. It is singlehandedly responsible for helping Americans who’ve never set foot in an underground nightclub to become conversant in hip pads and fluent in yas-queen lingo.

“RuPaul has brought drag into the mainstream,” King says.

Earlier this year, The New York Times declared “this is the golden age of drag,” noting the cosmetic companies, YouTube stars and wigmakers that owe their success to RuPaul’s popularity.

While the newspaper didn’t mention drag-themed restaurants, that sector is thriving too: Hamburger Mary’s, a pioneering drag queen restaurant, recently opened its 19th and 20th locations in St. Louis and Jacksonville. Lips is about to expand to Chicago, and Charlotte last summer gained its first restaurant with servers and performers in drag. “Now Charlotte can officially be called the ‘Queen City,’” proclaimed a release from Boulevard 1820, located in the same building as Southern comfort food stalwart Tupelo Honey.

Nowadays in the Southeast, bloody Marys and bodysuits go together naturally. But in 1991, when Saied Azali started pairing a brunch buffet with drag shows at Perry’s Restaurant in Washington, D.C., drag wasn’t yet classified as an obvious match for a meal.

Azali, an Iranian immigrant who studied at a Quaker college in North Carolina, first encountered drag in 1980s Manhattan, where queens shared spaces with the new wave bands he liked. He was intrigued by the genre, and guessed that floor shows could help draw restaurant customers to a neighborhood with a dodgy reputation. The performances at Perry’s initially brought in “a mostly gay clientele.”

“Then slowly it changed,” he says. “It became very popular among females: Now 90 percent of my customers are female. We still have some gay clientele, but it looks like females like drag shows more than anybody else.”

The demographics are even starker at Lips Atlanta.

“Our clientele is predominantly heterosexual females, celebrating anything from birthdays to retirement to finishing chemo,” King says. “It’s a great place for women to just get crazy. The problem I’m having is we’re almost invisible to the gay community: I’m trying to remind Atlanta that we’re here.”

That phenomenon is at odds with the last century of U.S. gay history, says Susan Shaw, professor of women, gender and sexuality studies at Oregon State University.

“Drag was a form of protest that made clear gender is constructed,” Shaw says, pointing out that drag queens were on the frontlines of the gay rights struggle. “In some ways, that’s gotten lost as the dominant culture has started to consume drag as entertainment without any sense of its history.”

Shaw is careful to say she doesn’t want to discourage people from going to drag shows, since she’s sensitive to the scarcity of paying jobs for drag performers. But she’s also wary of “queer spectacle” situations in which customers are mindlessly chowing on chicken wings as a made-up queen saunters by.

“The last thing you want to think about at a party is politics, but when people go, they need to be attentive,” she says. “It’s not a freak show.”

Drag-themed dining has become so associated with straight white women in general, and with bachelorettes in particular, that Shaw last year tackled the topic for the Huffington Post in a story titled “Bachelorette Parties, Drag, and the Appropriation of Queer Space.” (She is an academic, after all.)

As Shaw recounts, she and her partner took Shaw’s sister to a storied Portland drag show venue, and found themselves in a room full of brides and bridesmaids. Looking around, Shaw’s partner asked her, "Do you think it’s OK to act like we’re together?”

Shaw remains galled by the idea that their loving behavior wouldn’t be tolerated by women who’d come to cheer for drag queens. Ultimately, she’s concerned that what looks like open-mindedness in a bar or restaurant may translate to a narrow view of the acceptable ways in which to exhibit sexuality.

Those questions are sincere, not rhetorical: Drag performers and spectators alike agree that drag is a difficult subject to assess without being able to peer into the minds of participants. Additionally, many of the issues raised by the genre aren’t even close to clear-cut. For example, sexuality aside, drag-themed dining taps into weighty gender matters.

“I do not find it respectful to stuff a dollar bill down someone’s cleavage,” Shaw says. “It’s one of the things as a feminist, I struggle with.”

At Queens on King, it wasn’t lost on some attendees that the crowd went wild when a male guest spontaneously buried his head in Van Pelt’s bosom as she took a commanding turn through The William Aiken House’s backyard. The house is owned by Patrick Properties Hospitality Group, which just days before the brunch accepted the resignation of its CEO, who former employees had accused of touching women in an overly close and suggestive fashion.

Still, drag defenders say women are empowered by queens proclaiming their superiority and strutting with authority. Azali describes it as “a fantasy thing.”

In King’s opinion, “It gives chromosomal females an opportunity to let loose in an environment where they’re not threatened, because you’re not going to find an overabundance of heterosexual men.”

That was certainly the case at JohnKing Bar & Grill’s inaugural Drag Bingo night, organized by Wade Allen “to showcase the new queens of Charleston, because there are so many queens who aren’t getting showcased.” Allen’s corps decided to skip the bingo game, but a group of women seated at the upstairs bar didn’t seem to mind: They sang along at full throttle with a first-person song that gives explicit and unprintable instructions for pleasing a woman in bed.

JohnKing is better known for its $3 Fireball shots and cheeseburgers than its support of women and minorities. “We talked a lot about it if it was a LGBTQ-friendly restaurant,” Allen says. Yet Shaw believes that even in sanitized settings, such as King Street bars and suburban luncheonettes, drag can still test boundaries. She was partly persuaded by a stunning drag performer who appeared at a brunch in Miami.

“She was beautiful in every imaginable way,” Shaw recalls. “It messed with straight men and straight women and lesbians, for them to think about being attracted to her. So I think there is still the potential for drag to do what we want it to do, if we’re open to disruption.”

Drag performers dance for bar goers at JohnKing Grill & Bar on Thursday, May 3, 2018 in downtown Charleston.