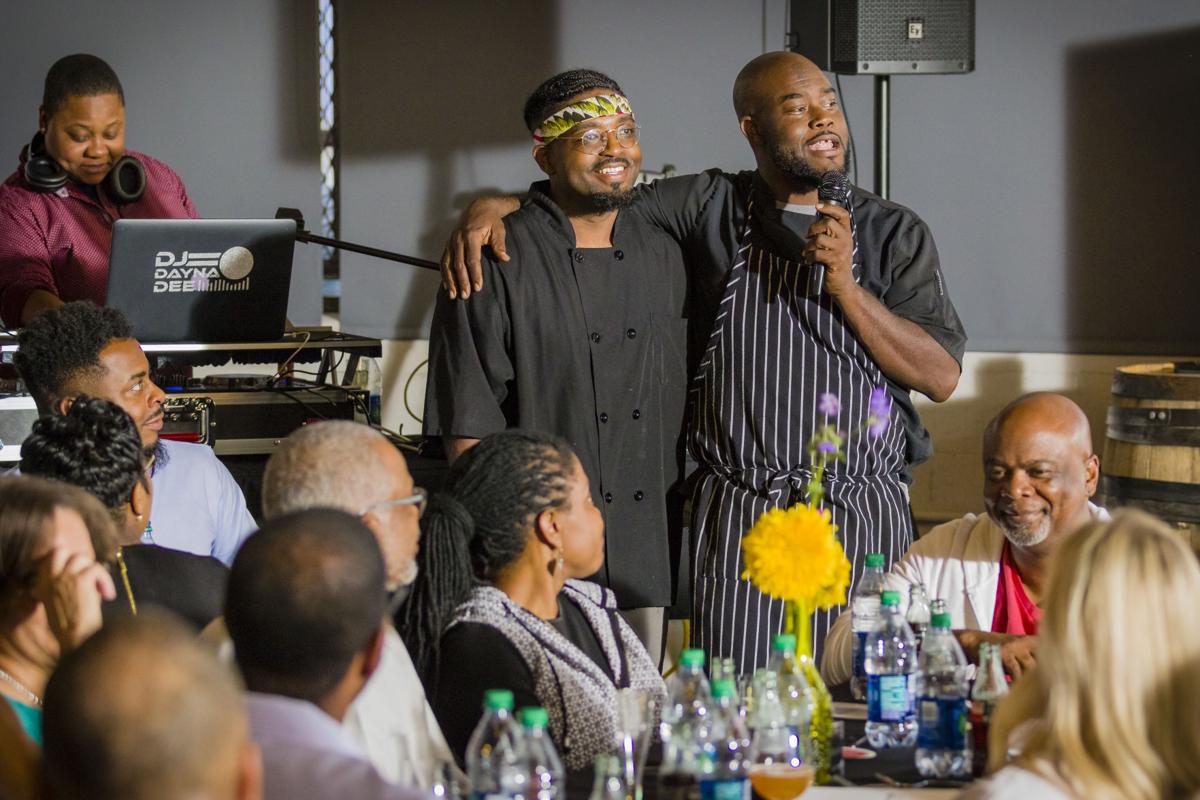 Core members of the Soul Food Sessions, chef, Greg Williams, left, stands with a smile as his fellow chef, Michael Bowling describes Williams' influence on the menu during the first Soul Food Sessions dinner at Free Range Brewery, June 19, in Charlotte, N.C. Bob Leverone/Special to The Post and Courier 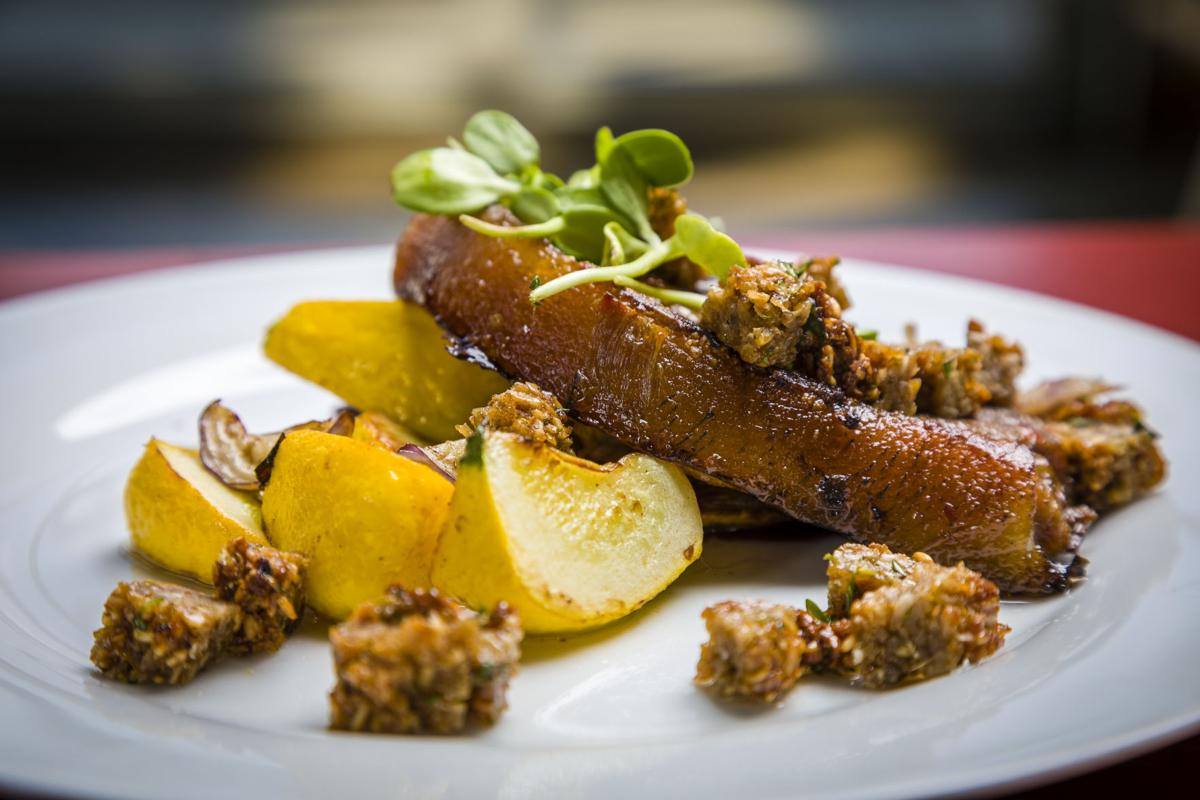 Smoked brisket with red cola sauce. Bob Leverone/Special to The Post and Courier 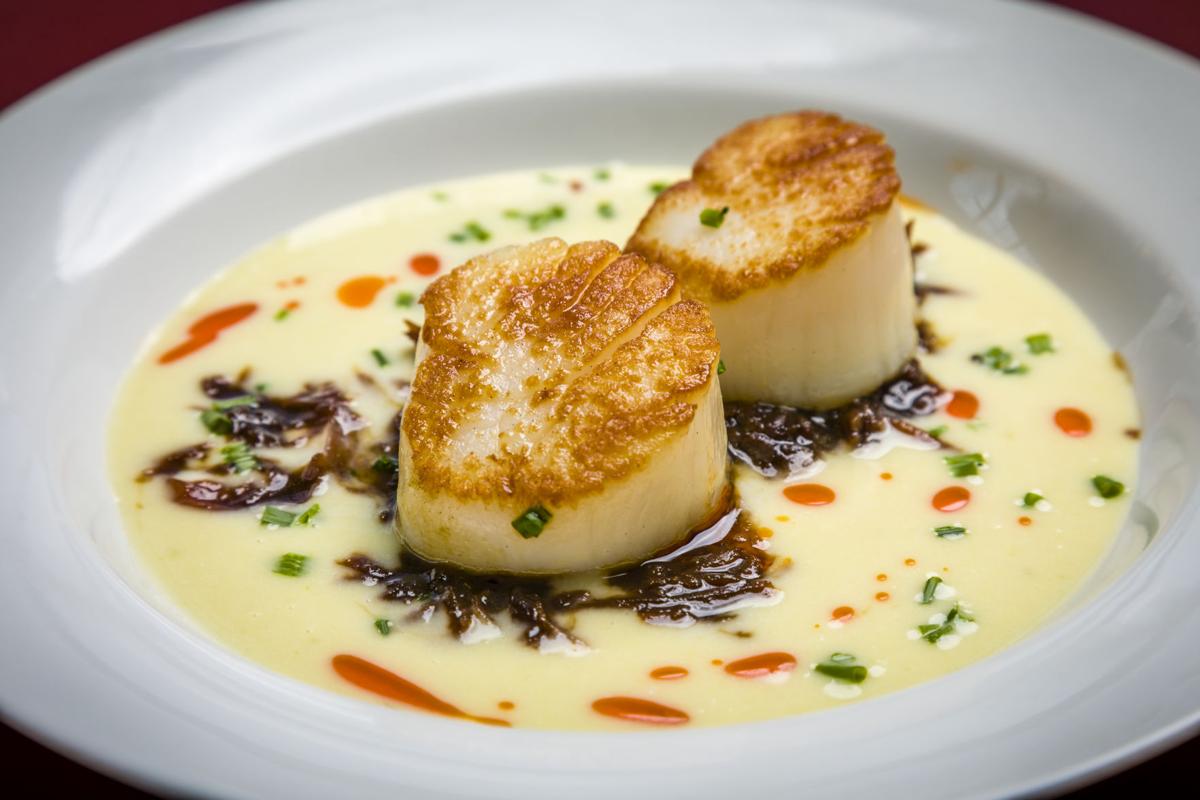 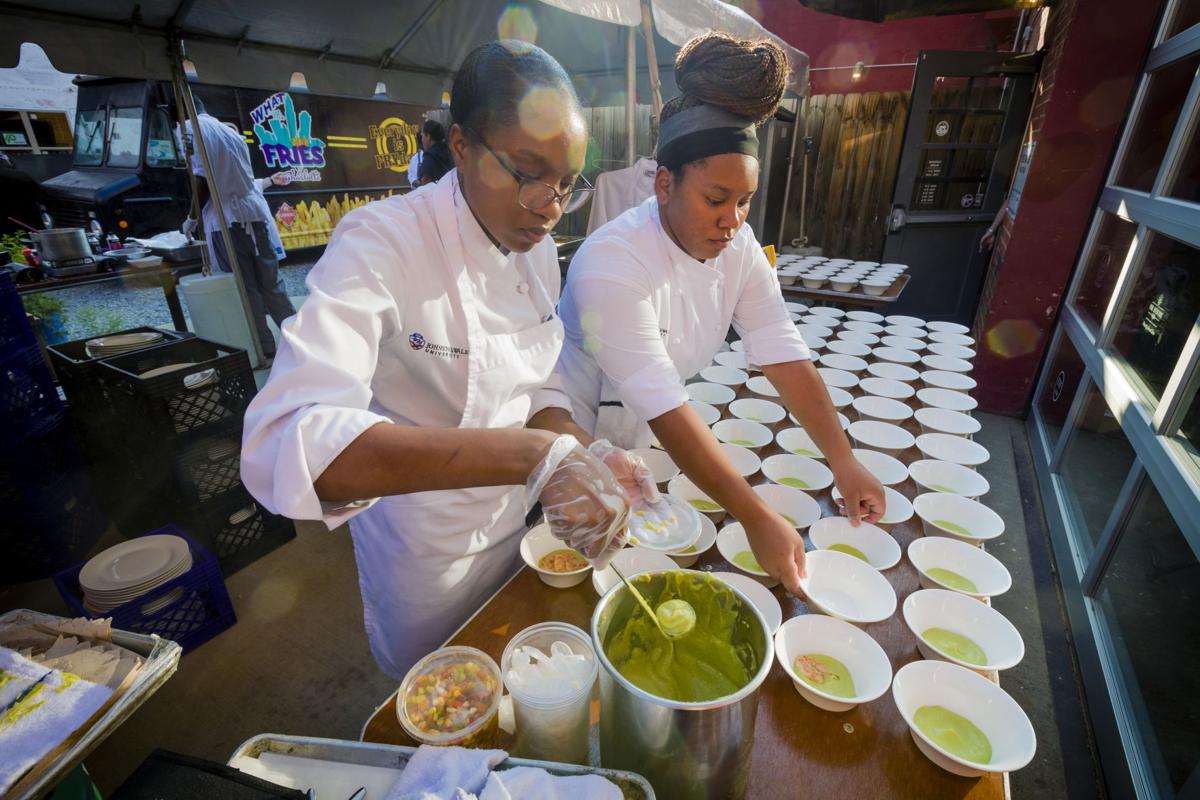 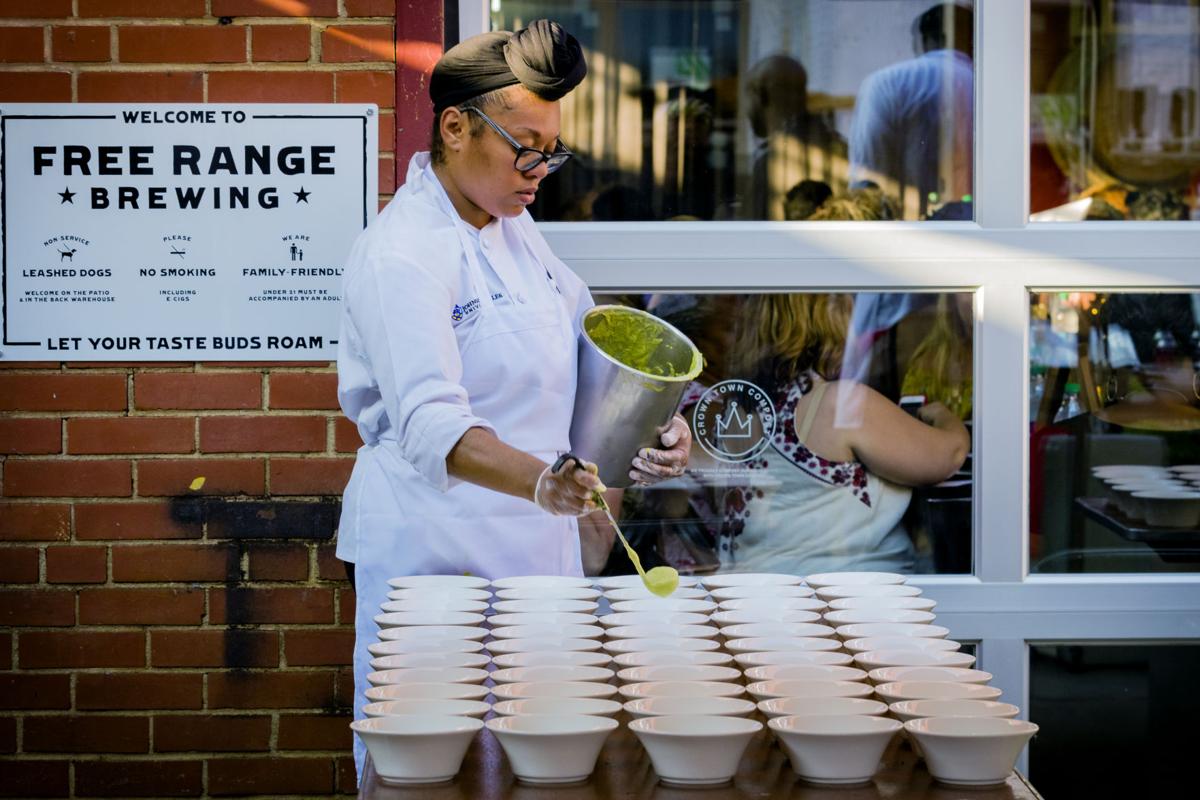 JWU student Elena Lundy prepares a part of a course during the first Soul Food Sessions dinner at Free Range Brewery, Tuesday, June 19, 2018, in Charlotte, NC. Bob Leverone/Special to The Post and Courier 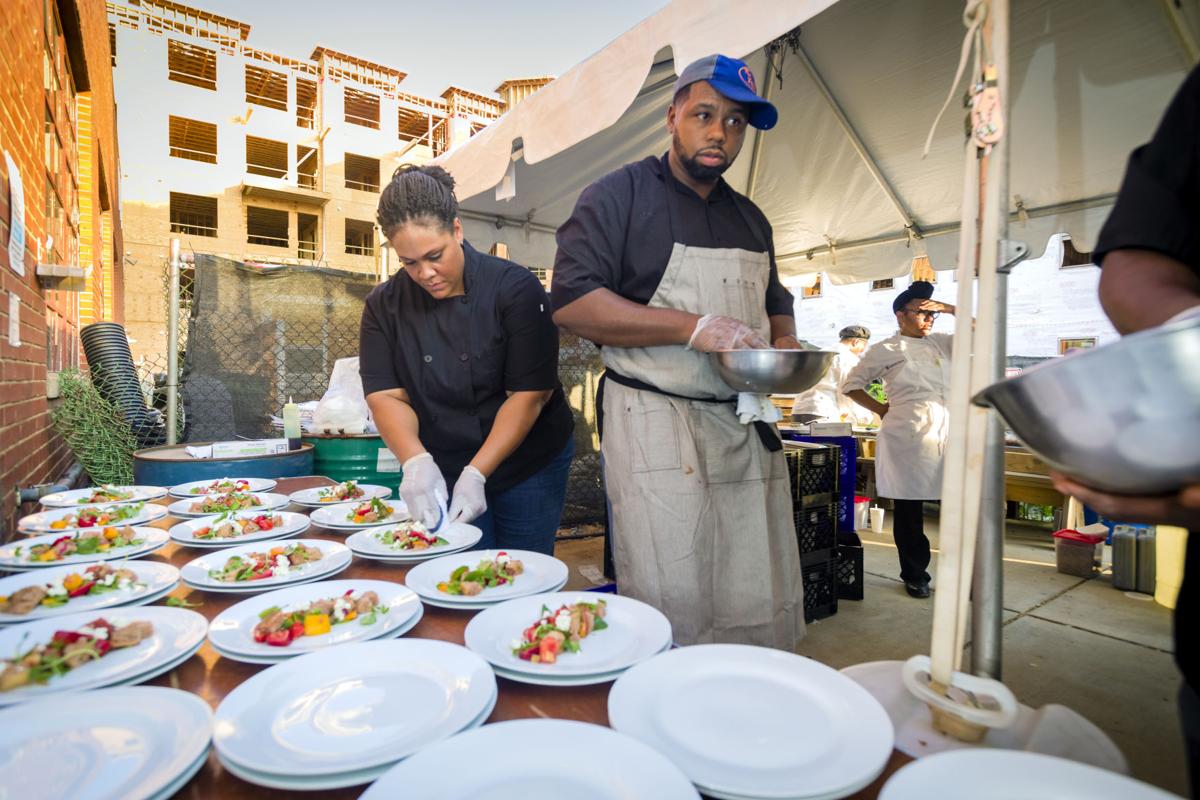 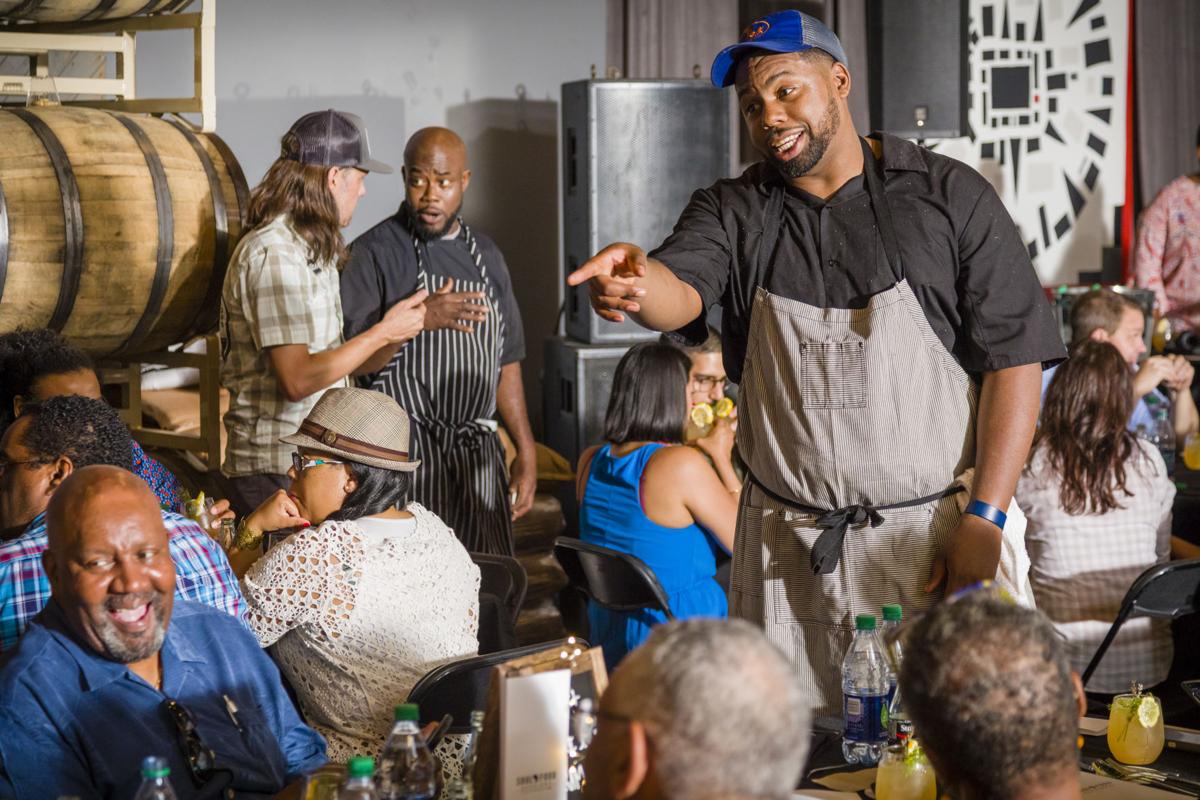 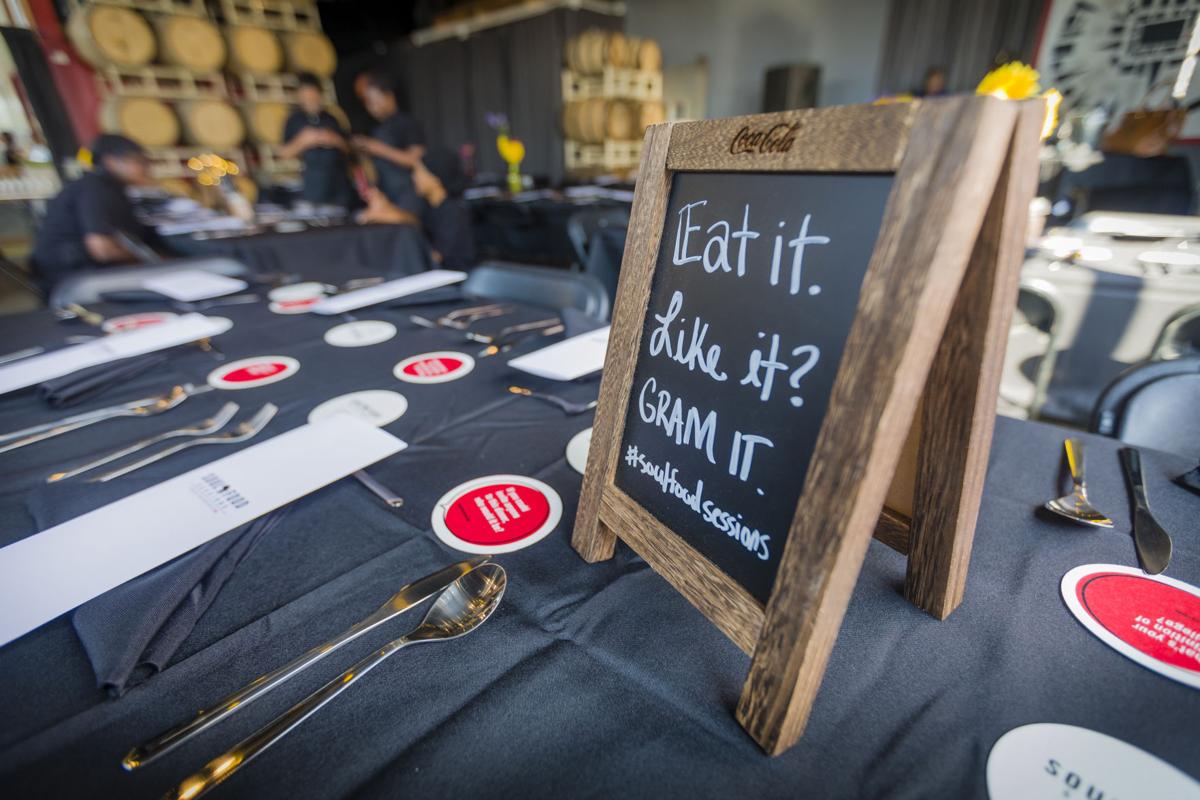 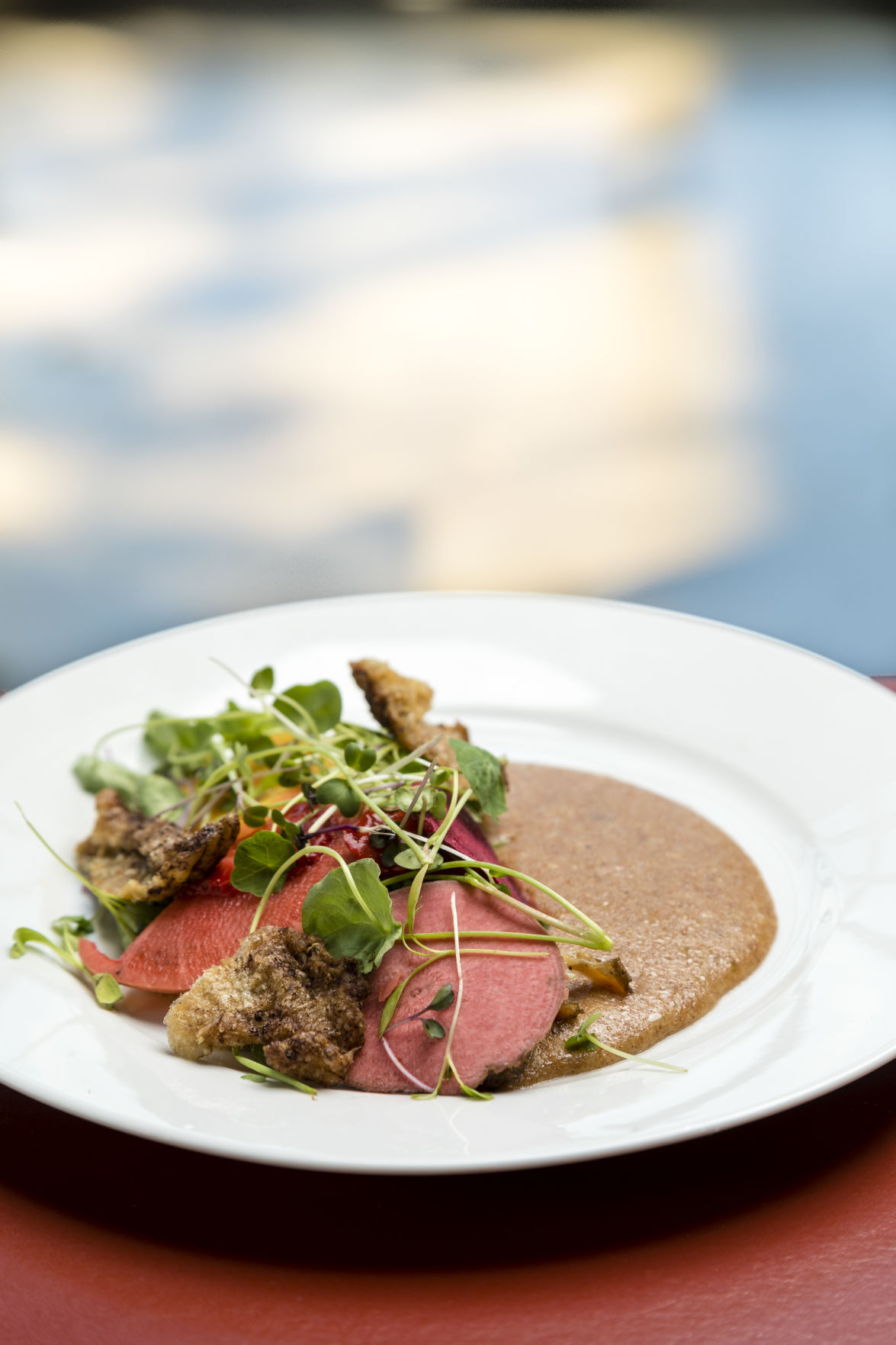 Cocoa-dusted chicken skins were part of the setting for grilled chicken thighs. Bob Leverone/Special to The Post and Courier 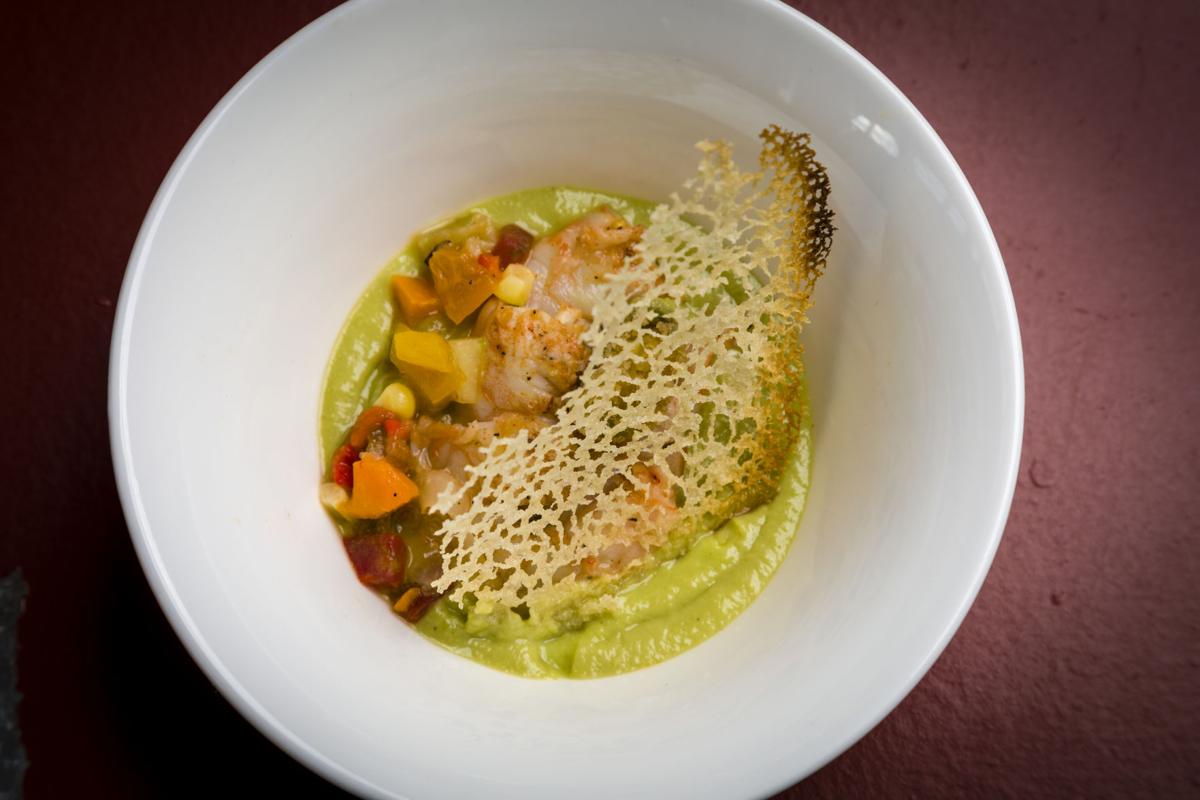 Avocado gazpacho. Bob Leverone/Special to The Post and Courier 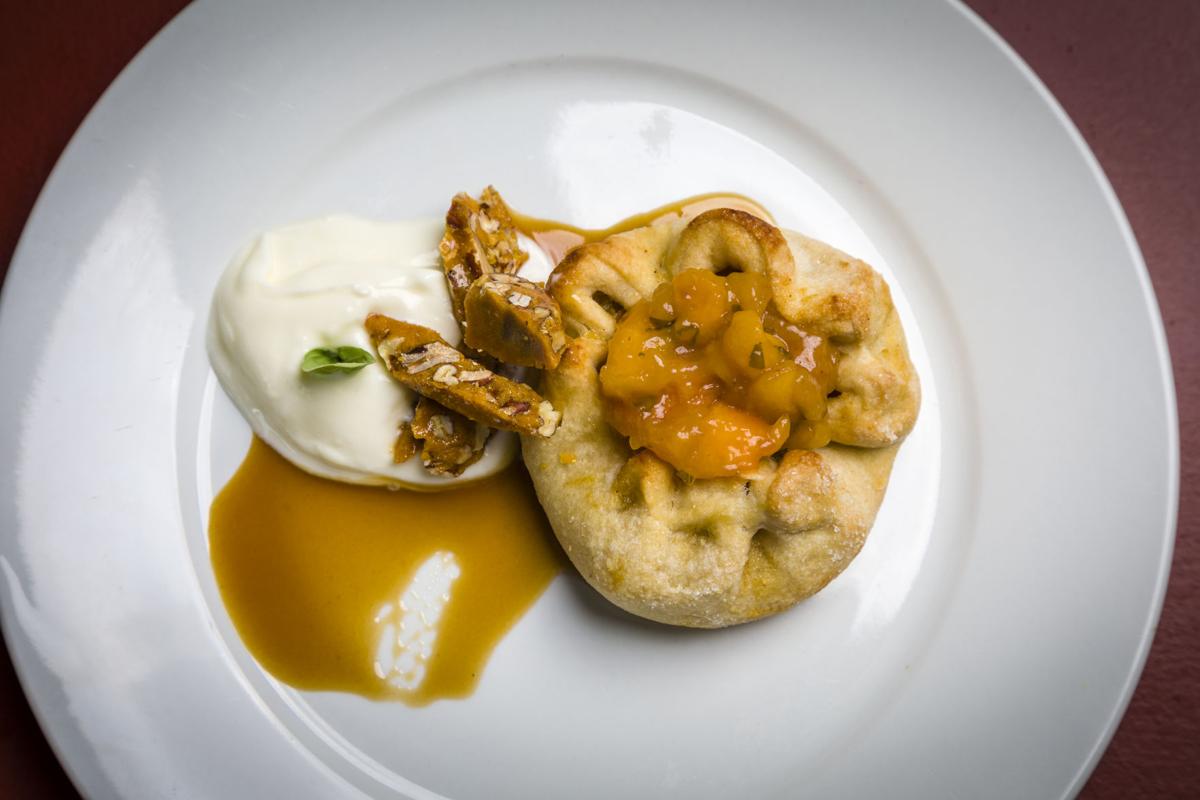 Peach basil galette with pecan crunch. Bob Leverone/Special to The Post and Courier

Core members of the Soul Food Sessions, chef, Greg Williams, left, stands with a smile as his fellow chef, Michael Bowling describes Williams' influence on the menu during the first Soul Food Sessions dinner at Free Range Brewery, June 19, in Charlotte, N.C. Bob Leverone/Special to The Post and Courier

Smoked brisket with red cola sauce. Bob Leverone/Special to The Post and Courier

JWU student Elena Lundy prepares a part of a course during the first Soul Food Sessions dinner at Free Range Brewery, Tuesday, June 19, 2018, in Charlotte, NC. Bob Leverone/Special to The Post and Courier

Cocoa-dusted chicken skins were part of the setting for grilled chicken thighs. Bob Leverone/Special to The Post and Courier

Avocado gazpacho. Bob Leverone/Special to The Post and Courier

Peach basil galette with pecan crunch. Bob Leverone/Special to The Post and Courier

Each of the pop-up dinners hosted by Soul Food Sessions, a group of Charlotte area African-American chefs that first coalesced in late 2016, has been a bit different from the meal that preceded it. While keeping the emphasis on high-quality food, organizers have adjusted menus and service formats to match the seasons and host venues: They plated jerk-spiced beef tartare on coco bread at a borrowed Italian restaurant last summer, and for a holiday mixer at a community center, they set out fruit cake points with braised pheasant.

Still, the biggest change from one event to the next has been the composition of the crowd.

“To be 100 percent honest with you, that was the first time we had a majority African-American crowd,” Michael Bowling said the morning after a jubilant six-course meal scheduled to coincide with Juneteenth, the annual commemoration of slavery’s end. “It was nice to see that many African-Americans in the room.”

When food truck owner Jamie Barnes first approached Bowling and Gregory Collier, owner of The Yolk in Rock Hill, with the idea that would become Soul Food Sessions, he told them, “Hey, I want to do dinner with just bros. We’re going to call it soul food and not do any soul food.” By which he meant he wanted a forum in which black chefs, many of whom have been denied high-profile executive positions and unable to establish restaurants in trendy commercial districts, could demonstrate that their repertoires aren’t limited to fried chicken and collard greens.

“Our goal was for people to say, ‘That’s some of the best food I’ve ever had’ and then say, ‘Those are black chefs,’” Bowling says.

In other words, the chefs knew approval of dishes classified as belonging to the black culinary canon doesn’t necessarily translate into acceptance of the people making them. So, along with fellow Soul Food Sessions founders Greg Williams and Jamie Suddoth, they aimed to shift the conversation from traditional African-American food to contemporary African-American talent. As Bowling exhorted the group gathered for the Juneteenth event, “Support minority chefs regardless of where they work, whether it’s a three-diamond restaurant or Joe’s Crab Shack.”

Yet African-Americans inclined to heed that call often find themselves in a challenging position. “If you walk in and you’re the minority, and a lot of us have been that person, my attitude about dining is you have to make it a regular occurrence,” Bowling continued, well aware that it’s taken nearly two years for Soul Food Sessions to achieve racial parity in its audience.

Now that the dinner series is going on the road, with a planned stop in Charleston this fall, the question is whether it can continue to draw a mixed group of ticket buyers.

D.R.E. James, a Charleston food writer who has contributed to The Post and Courier, also believes that black diners should frequent restaurants where whites predominate. With Femi Oyediran of Graft Wine Shop, he’s launching a program to escort Burke High School students to downtown’s poshest dining rooms. After the meals, students will be asked to complete worksheets and participate in discussions about their experiences.

“The lack of cultural diversity and the blatant line between the have and have-nots are the biggest problems in this city,” James says. “I'm in a prime position to do my part.”

But James can’t physically lead adults into upscale restaurants, nor can he vouch they won’t be subject to unwanted attention or disrespectful treatment in certain places. The best he can do is to assure potential restaurant patrons that money spent on transcendent meals generally isn’t wasted.

Cost has been a sticking point for Soul Food Sessions, though. “People have always balked at prices, and honestly, we’re underpriced as it is,” Bowling says of the time it took to diversify the crowd.

Pam Craddock is such a big fan of Soul Food Sessions that she’s attended five dinners. “I’m telling you: It’s just fun,” she said between snapping photos promised to other regulars. “The atmosphere is so laid back, and I love when they bring out the meal and the chef explains it.” Yet Craddock couldn’t persuade any of her friends to join her for the June dinner at Free Range Brewing. “They hear $90, and they’re like …” She trailed off; clearly disinterested in bringing any negativity into a space that the chefs and an energetic crew of volunteers had crammed with good cheer.

“Turn to your neighbor and repeat after me, ‘Neighbor, we’re going to have a fantabulous time tonight,’” Collier announced before the first course, smoked brisket with celebratory red drink barbecue sauce, appeared. Everyone in the room enthusiastically complied. He went on, “Happy Juneteenth. I guarantee you someone at your table can tell you what Juneteenth is about, but between trying to get this food out, I can’t.”

It wasn’t just any red drink that sugared the barbecue sauce. The Cherry Coca-Cola came from Coca-Cola Consolidated, a Charlotte-based distributor, which recently signed on as Soul Food Sessions’ sponsor. The company’s financial involvement made the group’s upcoming four-city tour possible, and also will allow them to publicize events in ways that would otherwise be out of financial reach.

Bowling suspects that for every person who’s dismissed Soul Food Sessions as too expensive, there are still more people who haven’t heard of it. “Social media is really targeted now,” he says. “Even the people who follow our Facebook page don’t get all of the posts.”

“Having a group of people behind you to organize things so you can focus on cooking is amazing,” Collier adds. “Knowing you have a little extra money to get scallops is a great thing.”

Unlike the upbeat mood at Soul Food Sessions’ first event since the sponsorship was announced in The Charlotte Observer, Collier’s “great” comes with a few qualifiers. Healthy food advocates associate Coca-Cola with the nation’s obesity crisis, which has taken a disproportionate toll on communities of color.

“I do dialysis three days a week, so I understand those questions,” Bowling says. “But if everyone took a broad look, they’re all equally bad: Everyone is pushing juice, but it’s all sugar.”

Longtime supporters of Soul Food Sessions also initially fretted that Coca-Cola’s branding could overwhelm the grassroots feel of the dinners. But nothing at the Juneteenth event lent credence to those concerns: Other than bottles of Dasani on the table, and a Coca-Cola Zero Sugar paired with soy balsamic scallops, the only material evidence of Coca-Cola’s involvement were cards printed with conversation starters, such as “If you could invite anyone to this dinner, who would it be?” (Barack Obama was a popular response.)

“So, yes, we’ve got some product placement,” Bowling told diners. “But we’re going on the road.”

Money raised by the dinners in Washington, D.C., Baltimore and Charleston will help fund scholarships for culinary students, as well as support ongoing mentorship by participating chefs.

“If you don’t understand kitchen culture, some things are tough to deal with,” Collier says, pointing out that when a new employee is tasked with a ridiculously laborious chore, he or she might mistake the assignment for subtle bigotry. For example, Collier as a rookie was told to brunoise a case of onions, which involves turning dozens of bulbs into cubes each about half the size of a pencil eraser.

“Just being able to navigate kitchen politics is important,” he says.

Other plans include showcasing more women: Jennifer Booker of Atlanta is preparing the vegetable course for the D.C. event, and a Soul Food Sisters dinner is in the works for Charlotte. Additionally, the core group of chefs is keen to look beyond the African-American experience.

Nearer in the future is the Charleston dinner, the finale of Soul Food Sessions’ first out-of-town tour. Bowling and Collier have already talked to chefs BJ Dennis and Kevin Mitchell about joining the evening’s lineup. They’ve also asked The Cocktail Bandits, Johnny Caldwell and Taneka Reaves, to mix drinks.

Both Bowling and Collier have cooked in Charleston before. Bowling worked for Bob Carter at the Peninsula Grill, and Collier staged at McCrady’s when Jeremiah Langhorne was its chef de cuisine. Still, they’re not at all blasé about what an appearance here could do for Soul Food Sessions.

“Charleston is the big one, because it’s still the food capital of the South,” Collier says. “Here in Charlotte, we have a soapbox. Once we get to Charleston, we’re on stage. We get to have a megaphone. It’s going to be amazing for us.”

Of that, Collier is sure. What he can’t yet know is who will be there to listen.

Four upcoming food events not to miss, including The Post and Courier Farmers Market

From free to high dollar, fall brings a plethora of food-oriented events. Here are the ones not to miss this weekend.