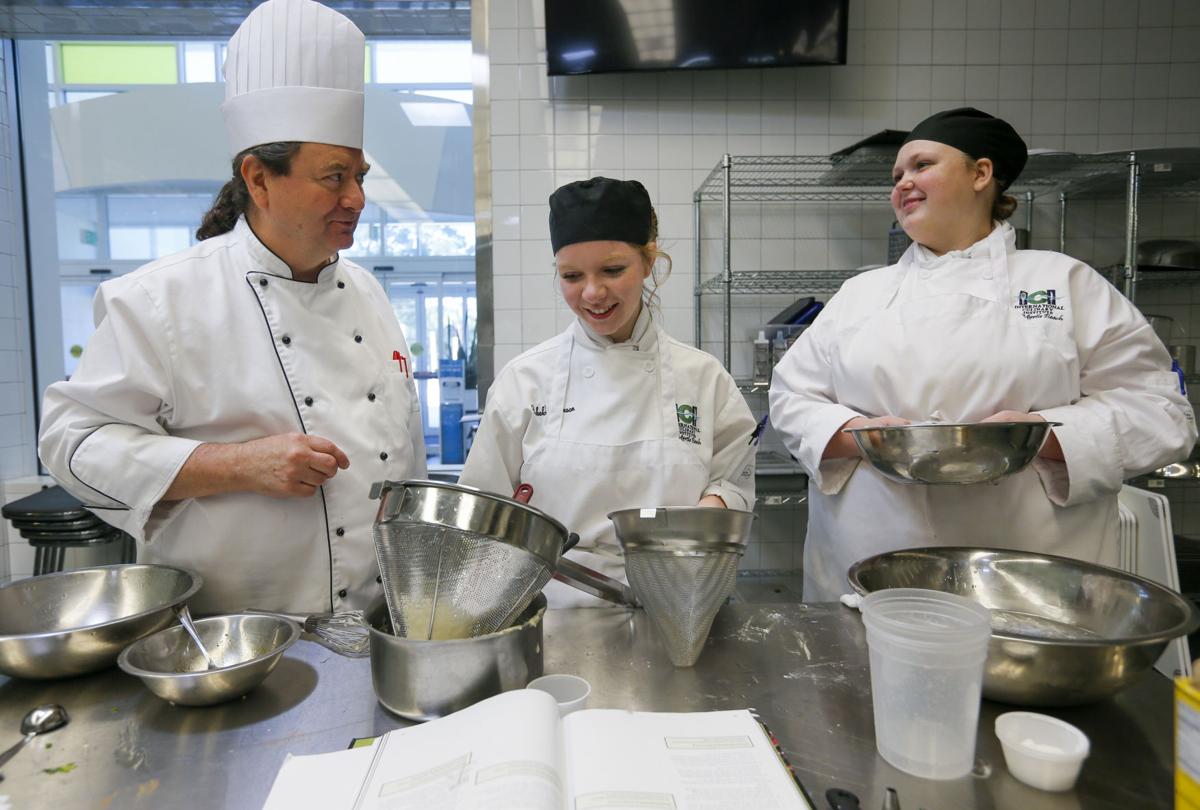 Chef Mark Zink, Rebekah Anderson, and Amber Toppas are instructed on how to strain the almond milk cream at the International Culinary Institute of Myrtle Beach on Thursday October 4, 2017. Michael Pronzato/ Staff 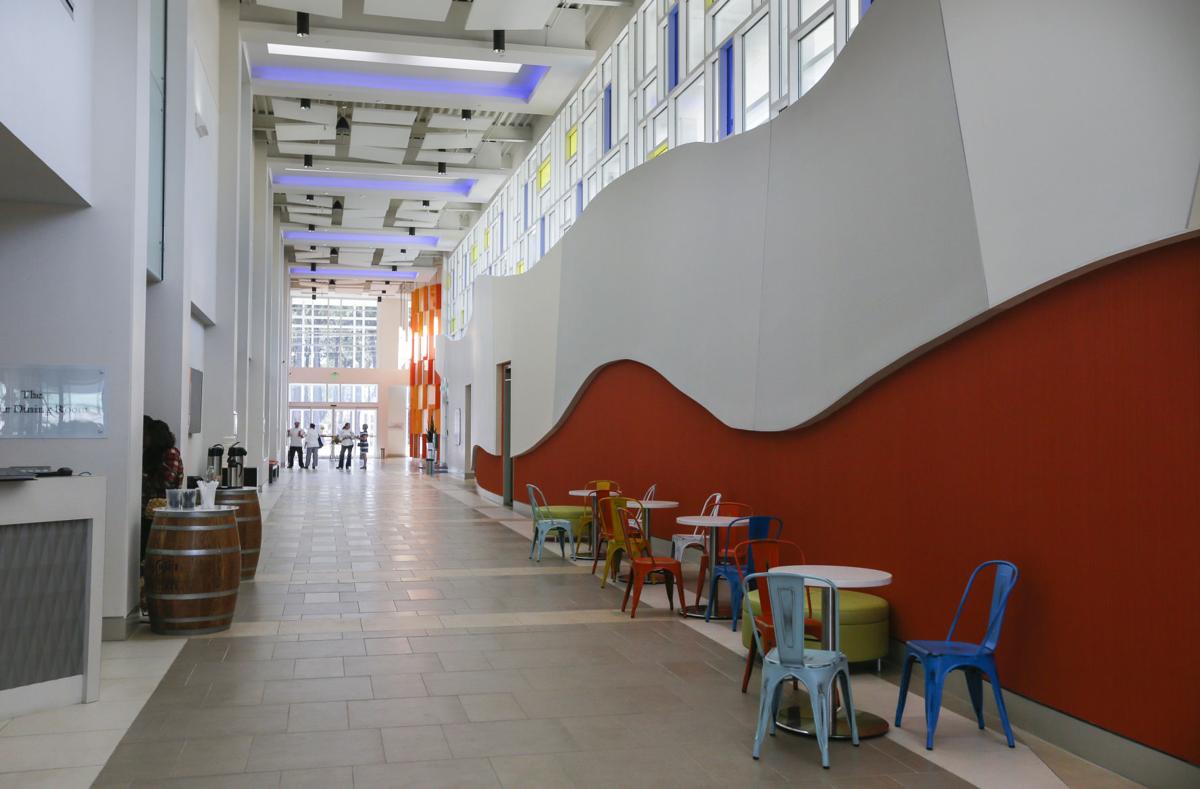 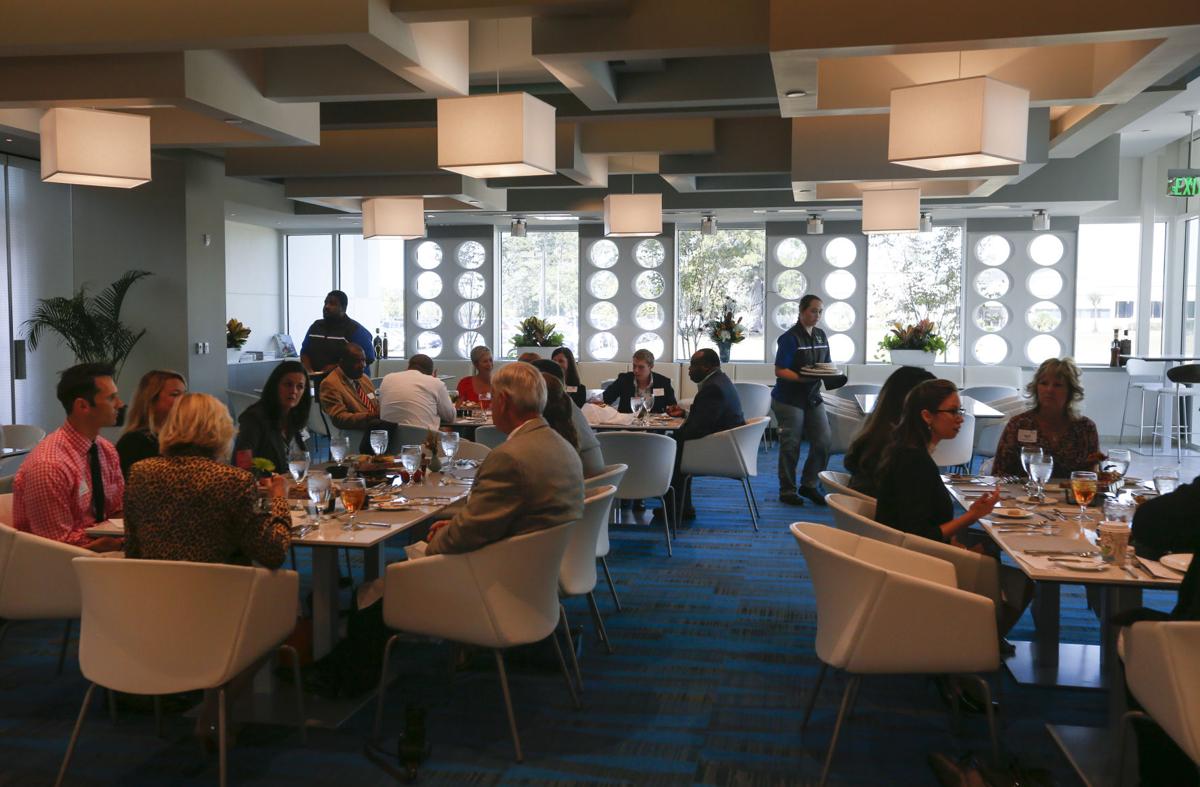 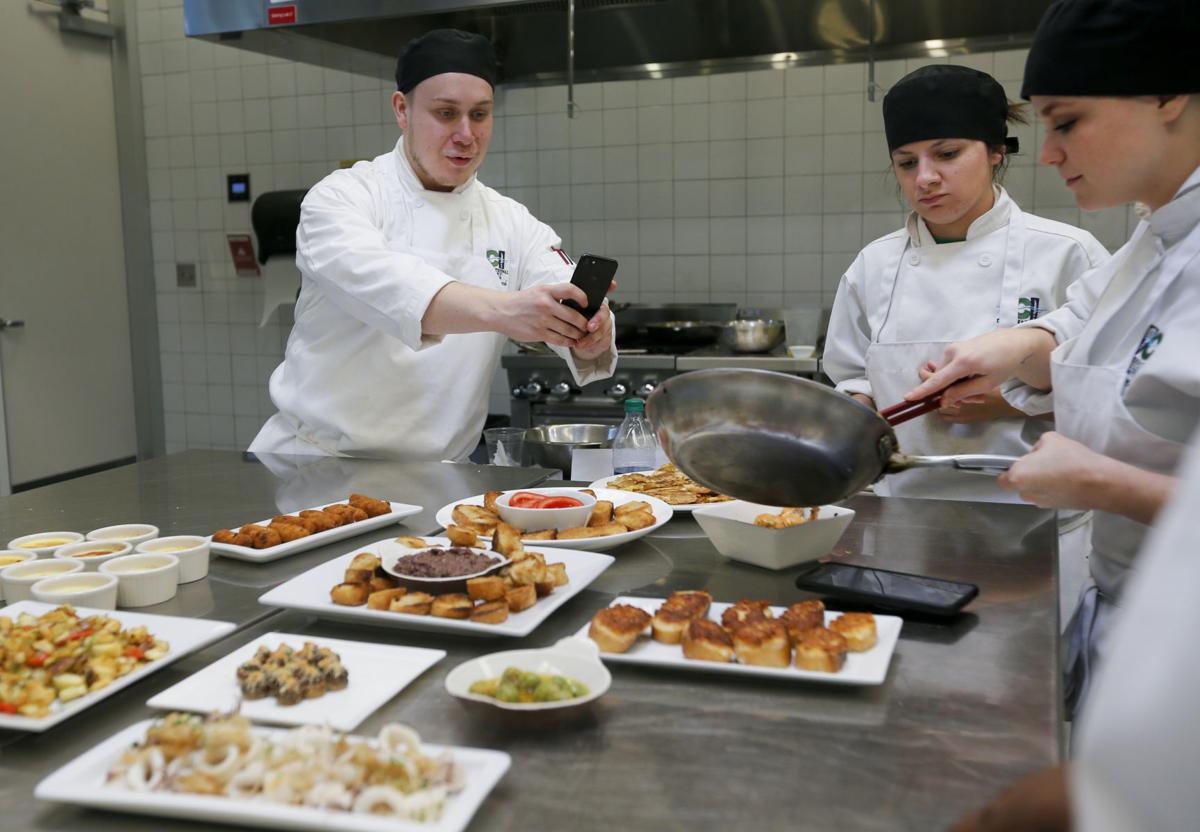 Jeremy Bishop documents the 11 tapas style dishes of Spanish and Portuguese cuisine in the international class at the International Culinary Institute of Myrtle Beach on Thursday October 4, 2017. Michael Pronzato/ Staff 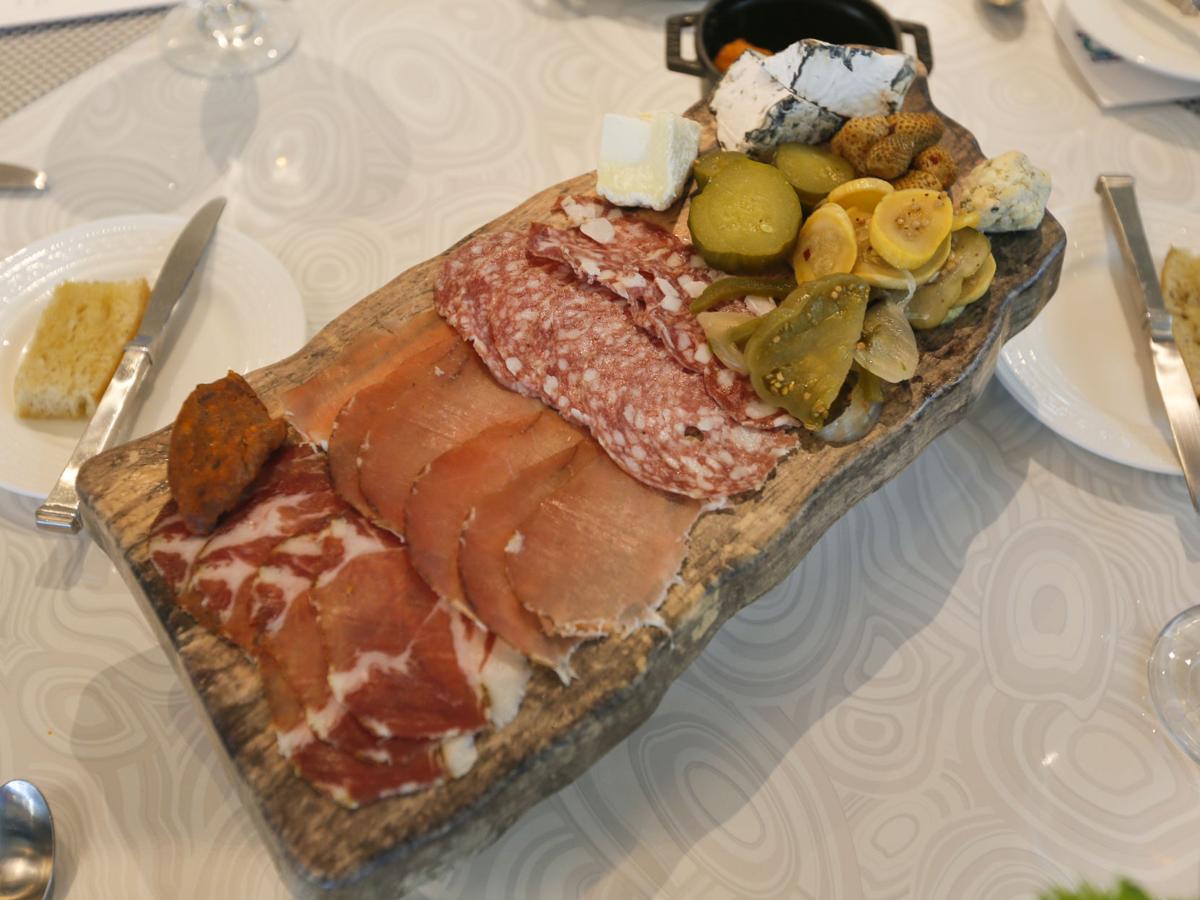 A meat and cheese board prepared by students in the dining kitchen at the International Culinary Institute of Myrtle Beach on Thursday October 4, 2017. Michael Pronzato/ Staff

Chef Mark Zink, Rebekah Anderson, and Amber Toppas are instructed on how to strain the almond milk cream at the International Culinary Institute of Myrtle Beach on Thursday October 4, 2017. Michael Pronzato/ Staff

Jeremy Bishop documents the 11 tapas style dishes of Spanish and Portuguese cuisine in the international class at the International Culinary Institute of Myrtle Beach on Thursday October 4, 2017. Michael Pronzato/ Staff

A meat and cheese board prepared by students in the dining kitchen at the International Culinary Institute of Myrtle Beach on Thursday October 4, 2017. Michael Pronzato/ Staff

The International Culinary Center of Myrtle Beach, opened last year by Horry Georgetown Technical College, has a gleaming barbecue training center with bricked-in pits out front, and a greenhouse with PVC towers designed to sprout strawberries out back. The main building houses a suite of production kitchens perpetually flooded with natural light, a restaurant with a wood-fired grill and a pint-sized cafe selling freshly baked croissants, biscuits and scones.

It looks great. But it looks even better on Instagram, which is what the school intended.

Based on pictures of the facility, chef hopefuls from as far away as New Hampshire and Texas are signing up for Horry Georgetown’s culinary program. For students from Mexico, assistant chair Kathleen Hassett says, it’s cheaper to move to South Carolina and pay $10,000 in annual out-of-state tuition than study cooking close to home.

Despite the visuals, enrollment is still lagging behind the goal that college leaders set when they committed to the $15 million project: With a total of 165 students working toward culinary arts or pastry arts degrees, the center hasn’t yet doubled its pre-2016 enrollee count. But helped along by the right social media strategy and community partnerships, Horry Georgetown is likely to keep magnetizing people with kitchen ambitions. The real question is how long they’ll stay.

In the two months since this semester started, the International Culinary Center has already shed 15 percent of its first-year students. Executive director Joe Bonaparte isn’t especially bothered by the figure, which he says reflects the high attrition rate at community colleges and the culture shock endemic to culinary schools. Nationwide, though, nosediving retention rates are emerging as yet another workforce problem plaguing the hospitality industry.

Ask industry insiders who’s to blame for the unfinished degrees, and it’s clear that everyone’s a suspect. Restaurant owners gripe that schools aren’t teaching valuable skills; faculty members claim students are daunted by hard work; and students say they can’t justify tuition when restaurants are dangling full-time paid employment right now. But in a state dependent on hospitality dollars, there’s intense interest in getting the problem sorted out.

Traud last year wrote his dissertation on “the connections between culinary education and the restaurant industry.” Until recently, he argues, those connections were flimsy at best: Many schools essentially taught to tests administered by the American Culinary Federation, so students would enter professional kitchens with superb knife skills and no inkling of how to read a ticket.

Chefs’ hostility toward formal training may also reflect the magnitude of their student loans. At the turn of the current century, private culinary schools opened at a dizzying pace, with the number of cooking schools nationwide doubling between 1996 and 2006. Le Cordon Bleu alone launched 11 new locations.

In September, the school closed the last of its 16 campuses. At the end, an associate’s degree cost $38,000, or about 110 percent of the average annual head cook’s wage in South Carolina, according to the Bureau of Labor Statistics. And as culinary instructors are constantly reminding their students, exceedingly few graduates are offered an executive chef job right out of school: They’re more likely to earn $20,000 a year as a line cook.

So now it’s up to the public sector to patch the culinary education gap left by private institutions, in much the way that Trident Tech created its $7 million Palmer Campus after Johnson & Wales University decamped to Charlotte. For regions looking to invigorate their culinary scenes, such as the Grand Strand, that’s a tantalizing possibility.

“One of the reasons I was brought here is the dining scene in Myrtle Beach has not been on anyone’s radar,” says Bonaparte, The International Culinary Center’s executive director. Bonaparte was charged not only with turning out enough culinary professionals to staff the surrounding area’s 2,500 restaurants and country clubs, but with subtly training the diners who eat there.

The school’s student-operated Fowler Dining Room has an open kitchen, an unusual restaurant amenity in Myrtle Beach. The idea, Bonaparte says, is to encourage chatter about subjects such as seafood sourcing, so locals quit “eating shrimp from Vietnam” when they go out. Once a week, the school hosts a farmers market to draw producers into the conversation.

Less flashy than the Fowler, with its glassed-in wine wall, is a mannequin positioned just beyond the school’s front door. But the fixture is no less important: He’s dressed in uniform so faculty members can point to an example of what their students are supposed to wear.

“You can only inspire so much,” Hassett, the assistant department chair, says with a sigh. “Students have to come in uniform. I’m telling them, ‘Look in the mirror. Do you look the way you look every day?’ You can only push and prod so hard, especially when it turns out you’re pushing harder than they are.”

When students remember to wear clean coats and closed-toed shoes, she says, they’re still apt to let their pants sag and dawdle on the way to class — if they show up at all.

“Class attendance was poor,” Jim McCallister says of the garde manger course he recently taught at The Art Institute in Charleston. “Class assignments were many times not done. To be fair, I’d say the majority of the class was holding down full-time jobs, in terms of juggling class and work, but I don’t understand their priorities. Why bother signing up for a $3,000 class? I did not find it satisfying.”

Bonaparte can reel off the “band-aids” popular in his field for awakening the passion that might motivate Hassett’s students to mop the floors after cooking without complaint. “We can do competitions, we can do clubs,” he says. “But the big thing is having that wow factor, so every day students think, ‘I want to be there tomorrow because I don’t want to miss what’s going on.’”

Yet students remain blasé despite access to combi ovens and ultrasonic homogenizers, which is why detractors wonder if they wouldn’t be better off perfecting their work ethic and good judgment — among other soft skills that culinary schools are now stressing — with less costly equipment, such as paper and pens. But culinary school supporters maintain the lessons learned in production kitchens are essential for culinary workers with their sights on a managerial role.

“They have good intentions,” Bonaparte says of staff-strapped chefs who promise to teach young culinarians everything they need to know. “But as soon as it gets busy and they need you to flip burgers all day, that’s what’s going to happen.”

Culinary school dropouts are generally worse off than line cooks who never started their degrees, because they don’t see any return on their time and money. “In between is worthless for everybody,” says Saboe, who hopes to develop short-term training programs which could be partially completed within restaurant kitchens.

Reshaping culinary education so it better resembles traditional apprenticeships was one of the actions recently considered by a S.C. Restaurant and Lodging Association task force. The committee last month released its “strategic roadmap” of recommendations for curing the statewide staffing crisis. According to the report, “it all starts with training.”

While the task force endorsed a wide spectrum of solutions for government, industry and schools to pursue, including hiring more retirees, creating “skills passports” for job hoppers and setting up buddy systems to pair longtime South Carolinians with new residents, SCRLA president John Durst says board members were most energized by the prospect of strengthening culinary education at the high school level.

Durst suspects many of the current culinary school retention issues would vanish if students were previously active in ProStart, the National Restaurant Association Educational Foundation’s foodservice program for high schoolers. ProStart earlier this year hosted its national championships in Charleston; Durst hopes that’s a point in South Carolina’s favor when the SCRLA appeals to the National Restaurant Association for additional funding.

“Expanding the ProStart program will be the first step in providing a greater bench,” he says. “What we’re trying to do is make folks more passionate about hospitality as a career.”

Of course, people can’t pay the rent with passion. When Saboe surveyed fellow task force members assigned to tackle the education piece of the labor shortage puzzle, they cited ongoing challenges such as “grocery stores and manufacturing taking the help normally hired in restaurants, and paying at rates that restaurants are not even coming close to matching” and “long hours, low pay.”

“Clearly the compensation issue is a keen one that needs to be addressed,” says Durst, who’s also urging members to rethink their benefits packages.

Still, Bonaparte is skeptical that offers of free parking or financial support for culinary school will ultimately attract workers to a notoriously low-wage sector.

“It’s way beyond the industry,” he says. “It’s the mindset of the country, and what food industrialization did to the perception of what a meal is worth, and people wanting cheap food and wanting it now.”

Cooking classes at the International Culinary Institute of Myrtle Beach