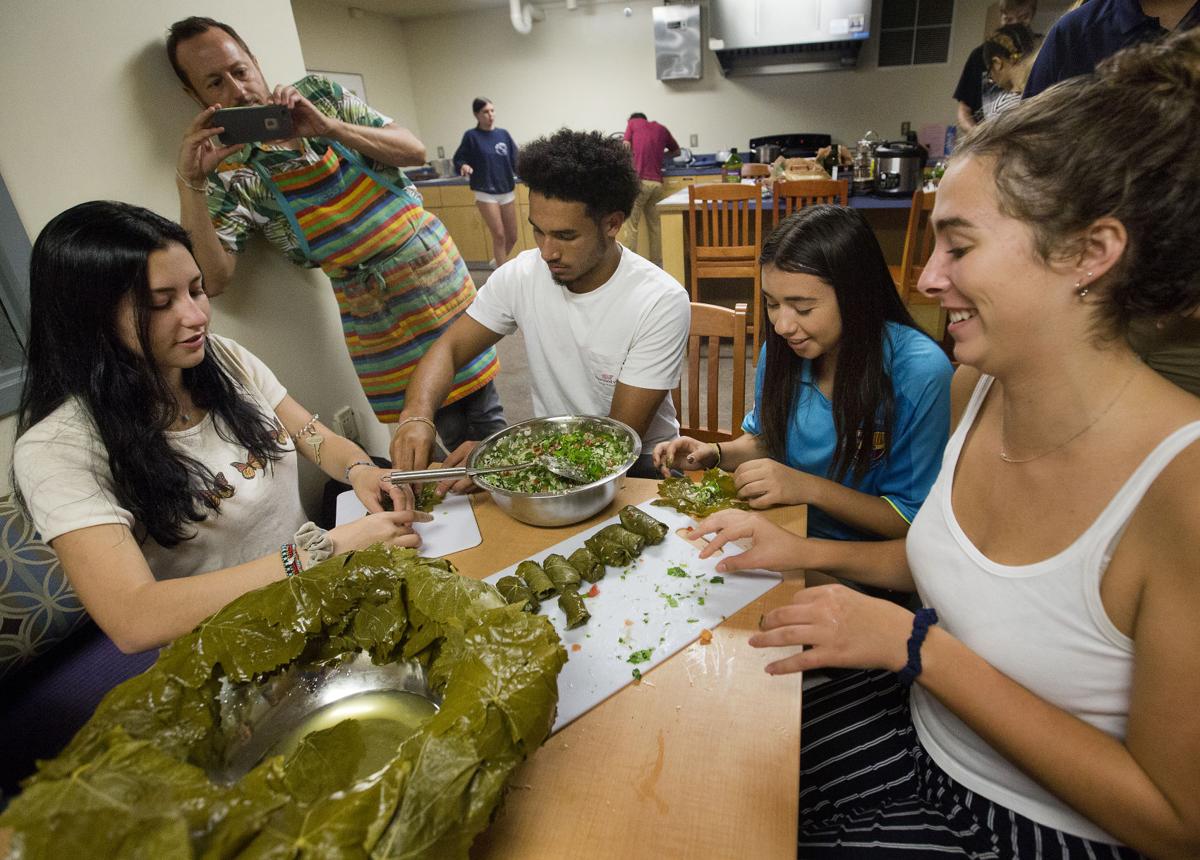 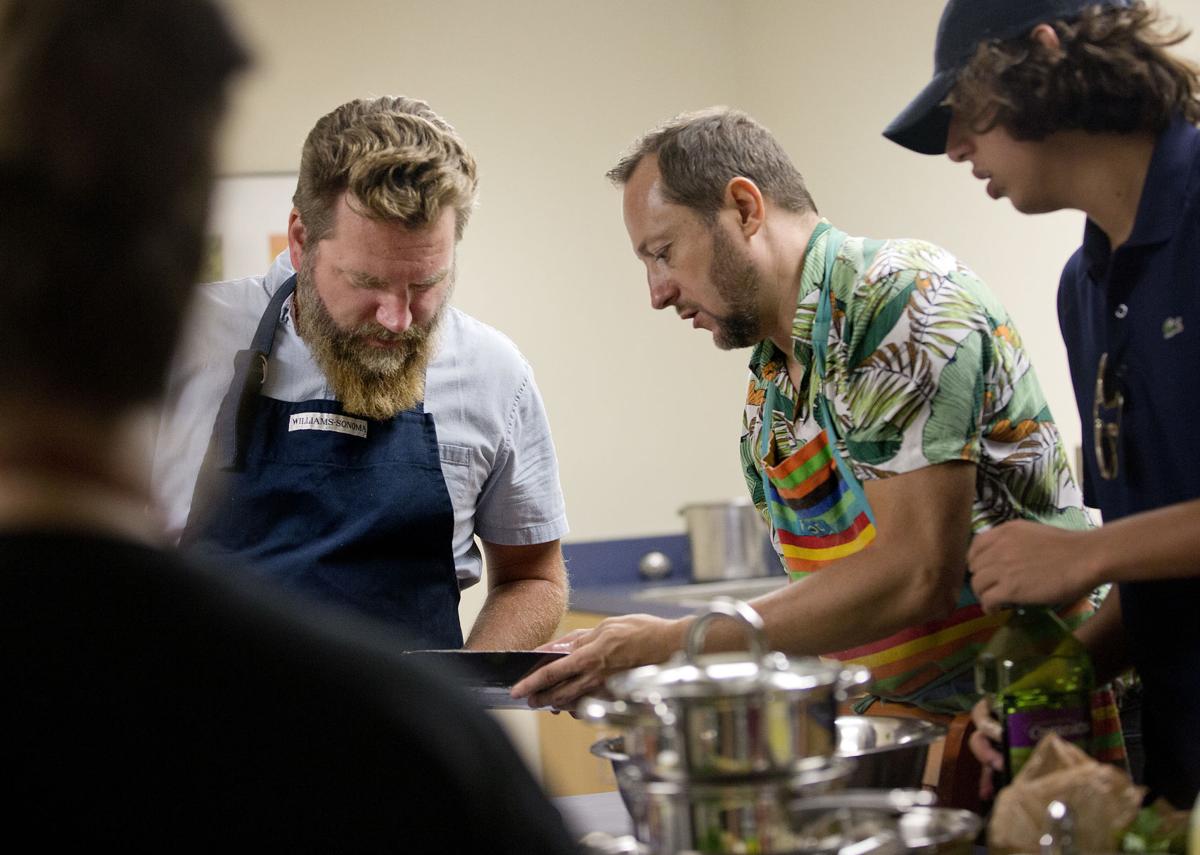 Professors Garrett Davidson (left) and Piotr Gibas with help from their students cook dinner Wednesday, September 19, 2019 as part of their Food, Faith and Travel in Asia class for the College of Charleston's First Year Experience program. Grace Beahm Alford/Staff 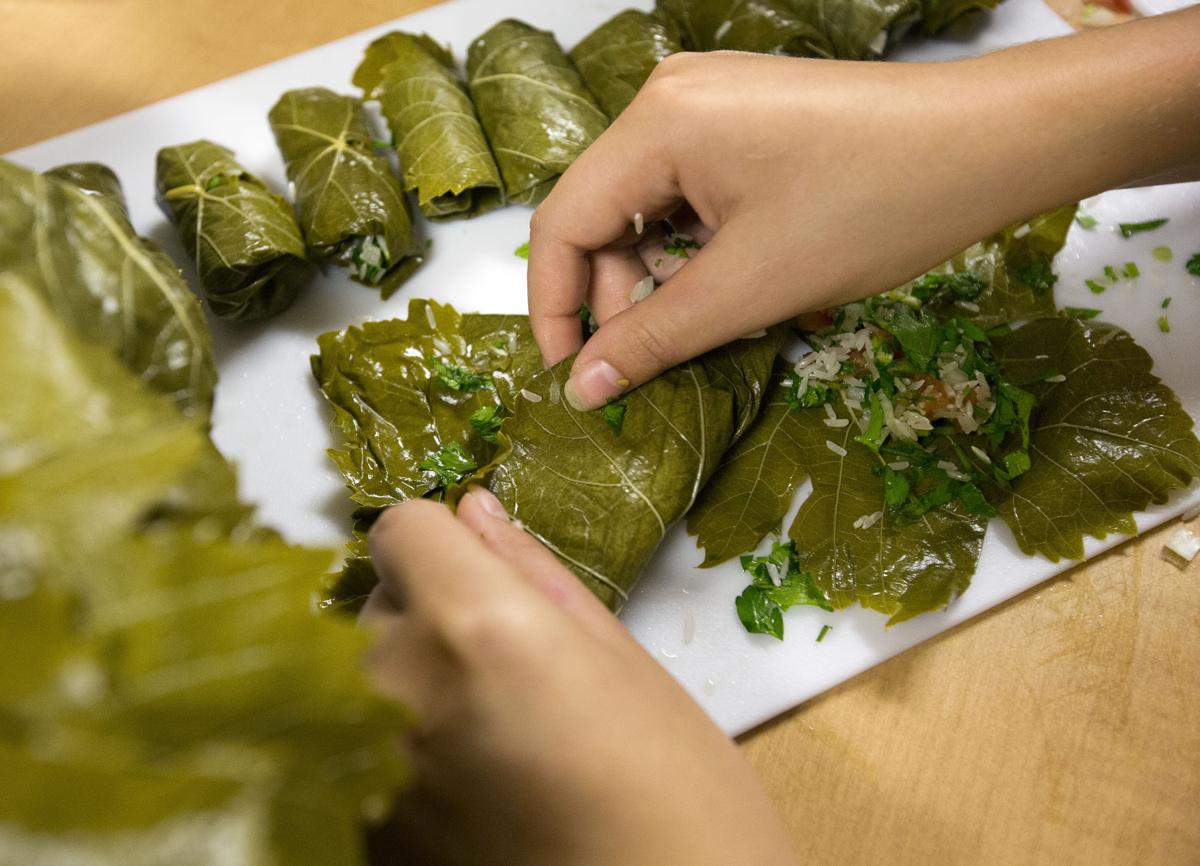 Students in the Food, Faith and Travel in Asia class fold dolmas in the Berry Residence Hall kitchen Wednesday, September 19, 2019. The class traces the steps and the food eaten on Ibn Battuta's journey in 1325, is part of the College of Charleston's First Year Experience program. Grace Beahm Alford/Staff 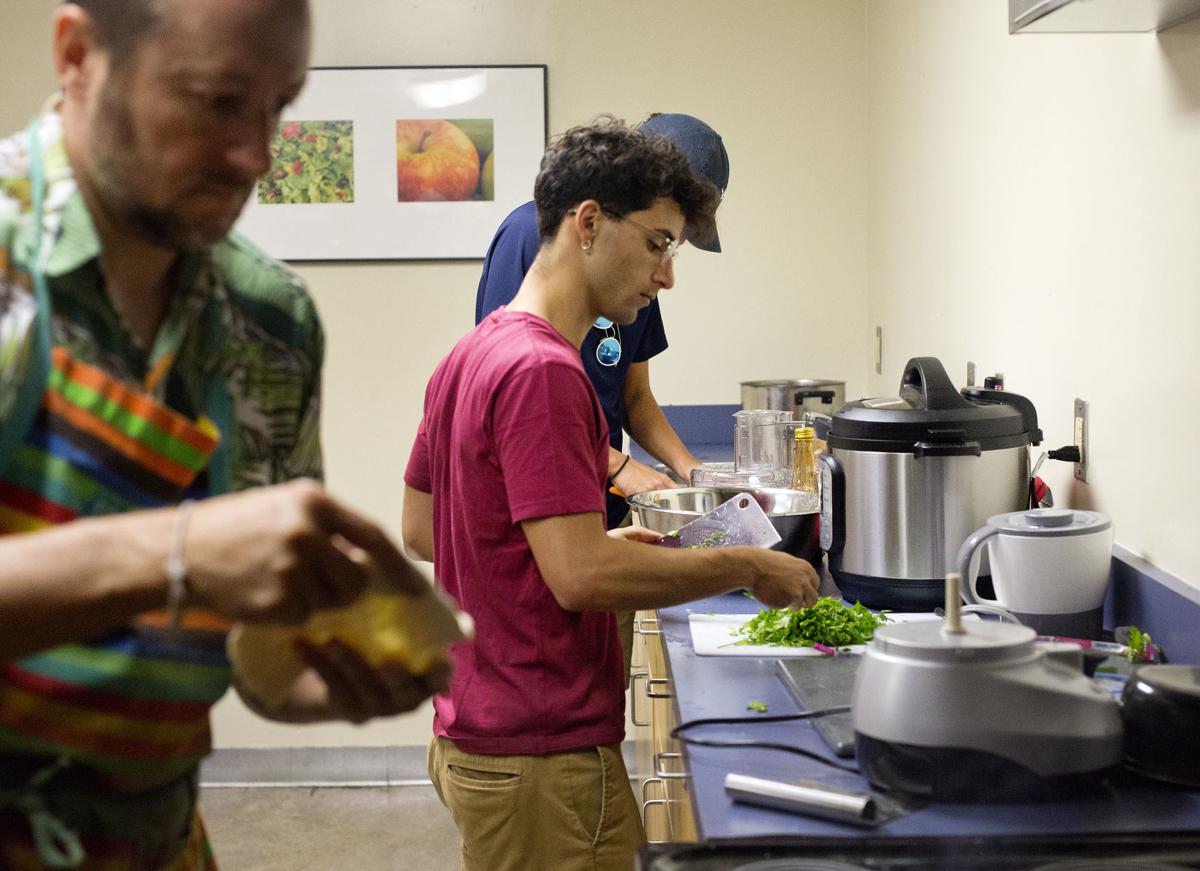 Professors Garrett Davidson (left) and Piotr Gibas with help from their students cook dinner Wednesday, September 19, 2019 as part of their Food, Faith and Travel in Asia class for the College of Charleston's First Year Experience program. Grace Beahm Alford/Staff

Students in the Food, Faith and Travel in Asia class fold dolmas in the Berry Residence Hall kitchen Wednesday, September 19, 2019. The class traces the steps and the food eaten on Ibn Battuta's journey in 1325, is part of the College of Charleston's First Year Experience program. Grace Beahm Alford/Staff

By the time Ibn Battuta had reached the far point of his legendary 1325 journey, he was approximately 6,100 miles from where he had started. Christian Gibson, a first-year student at the College of Charleston, this summer traveled just 95 miles to campus from his parents’ house in Myrtle Beach.

The distances aren’t exactly equivalent. But feeling exhilarated and confused when surrounded by strangers in an unfamiliar place is an experience common to Medieval Muslim tourists and present-day college students.

With 2,200 first-years arriving at once, the College of Charleston in 2008 created the First Year Experience program to help acclimate incoming students to the conventions of collegiate life. On paper, the interdisciplinary courses sound like the kind of classes only offered at high schools where English is taught outdoors and teachers go by their first names. There’s one devoted to dissecting the lyrics of Broadway's "Hamilton," and another which endeavors to explain why "Star Trek" is so popular.

“Nobody will take a literature class anymore,” says Piotr Gibas, assistant professor of Asian Studies at the College. “It needs to be literature and something. You need bait to make them think they won’t work too hard.”

Gibas and Garrett Davidson, a departmental colleague and cooking buddy, initially wanted to develop a First Year Experience academic program that would literally trace the steps of Battuta across Central Asia.

First Year Experiences abroad aren’t beyond the realm of possibility. A geology professor next year is taking students to Iceland to peer into volcanoes and eat fish jerky. But Davidson allows that the logistics of a trip encompassing even a portion of Battuta’s trek across modern-day Egypt, Saudi Arabia, Iran, India, Indonesia and China, among other places, are “kind of insane.”

So Gibas and Davidson instead booked the third-floor kitchen of Joe E. Berry Residence Hall on St. Philip Street for their course “Food, Faith and Travel in Asia.” Each week, the class spends one day discussing a reading and another preparing dishes that Battuta might have encountered at a specific stop along his years-long route.

Or more accurately, Gibas and Davidson fix the food while their 20 students mostly mill about until prompted to chop garlic or help set the table.

The format is perfectly aligned with a secondary goal of First Year Experiences. In addition to helping students think critically and master study skills, each small group is supposed to function as a kind of home room, offering stability and security to bewildered new students. And with a pair of professors minding the stove, a dorm can feel very much like home.

Journey for the ages

Battuta isn’t merely a household name in the Middle East. It’s a name applied to streets, restaurants and shopping malls. Just as French language students are introduced early on to Frere Jacques, and Spanish language students make the acquaintance of Don Quixote, students learning Arabic are bound to find Ibn Battuta in their first textbooks.

Unlike Jacques and Quixote, though, Battuta wasn’t a mythical figure, despite his tendency to behave like one. Born to a scholarly family in Tangiers, Battuta at age 21 “forsook (his) home as birds forsake their nests,” heading to Mecca on a religious pilgrimage.

All adult Muslims who can afford it are commanded like Ibn to make a hajj to Mecca at least once, but even in 2019, the complexities of paperwork and vaccinations leading up to the trip are so daunting that many pilgrims rely on tour operators. On top of that, a hajj is physically grueling: This year, temperatures during the hajj reached 110 degrees. Of the millions upon millions of Muslims who annually go to Mecca, most of them turn back when the hajj is done.

Once Battuta got a taste of travel, though, he just kept going. He skirted the northern and eastern coasts of Africa, then later swung through Southeast Asia, ending up in Beijing. Battuta immersed himself in foreign cultures, as serious travelers still strive to do today (although they might draw the line at marrying into different societies, as Battuta did multiple times).

In other words, he ate well. Scholars at Anadolu University in Turkey last year cataloged all of the mentions of food, cooking and kitchenware in Battuta’s surviving journals, and discovered his travel diet could be sorted into 13 general categories.

Nearly everywhere Battuta went, he found grains such as the oats given to him by a Turkish sultan and the millet prized by people along the Nile. In many places, the grain was milled for flour. In India, he wrote about oily breads smeared with halvah and served with roasted lamb heads. Battuta also documented India’s chickpeas and mung beans, the latter cooked with rice for breakfast.

A Crimean governor treated Battuta to horse meat, and Chinese poultry vendors sold him a chicken so big that he had to split it in order to fit each half into a pot. Battuta claimed the roosters were the size of ostriches. He also asserted the aphrodisiacal properties of coconuts and dried fish.

Over the course of 70,000-plus miles, Battuta feasted on Bukharan melons, honey doughnuts, rose sherbet, camel milk, hazelnuts, hemp, rabbit (to prove to Anatolians that he wasn’t a member of the Shia branch of Islam), bananas and salted sardines.

Rabbit was on the menu at a recent meeting of Food, Faith and Travel in Asia, as were chickpeas, rice and green mallow, a leafy green that produces an okra-like slime when boiled. The session was devoted to Egypt, where Davidson lived for years.

“This is what dead rabbit looks like,” Gibas told the students, flourishing a package of meat with the butcher paper pulled back. “I feel like the bad guy.”

Yet the students weren’t particularly bothered by the prospect of eating rabbit, nor were they put off by Davidson’s description of the mucilaginous mallow. Even though the class structure seems like an easy setup for vignettes about young people encountering new foods, first-years drawn to a cooking class tend to be fairly comfortable in the global pantry.

“Egypt was one I was looking forward to,” Gibson, the student from Myrtle Beach, said. He picked Davidson and Gibas’ course over a first-year experience exploring why dogs love their owners.

What is more challenging for the students is cooking. Gibson knows how to make grilled cheese and ramen, which is about the extent of most first-years’ kitchen tricks. (Dov Trestmann is an exception. The 19-year-old grew up on a Connecticut goat dairy and works as a sous chef.) When a recipe calls for cut onions, a number of the students plead they’re prone to onion tears, while the students who accept the assignment come dangerously close to amputating their fingers with a cleaver.

So Davidson and Gibas handle most of the meal preparation, with help from Trestmann. “I’m going to caramelize onions,” he announced before darting upstairs to a backup kitchen. They pause periodically to share souvenirs and memories from places where Battuta went. Gibas rolled out pita dough on an inlaid board he picked up in India, and a jar of ghee sparked a story about the woman who Davidson hired as a cook when he lived in Egypt.

“She had a five-gallon metal drum of ghee, and within a month and a half, it was gone,” he said. “I thought she was stealing it. But no, my friends told me this is perfectly normal. Ghee is essential.”

In the classroom, discussions have strayed beyond cookware and ingredients. Before cooking from Magda Mehdawy’s book, "My Egyptian Grandmother’s Kitchen," students watched an episode of Anthony Bourdain’s No Reservations filmed in Egypt. The ensuing conversation touched on overpopulation, the role of religion in society, public health and the consequences of conservatism.

In other words, by studying food, the students are ranging all over the place, just like Battuta.

Students participate in the Food, Faith and Travel in Asia class, that traces the steps and the food eaten on Ibn Battuta's 1325 journey, part…