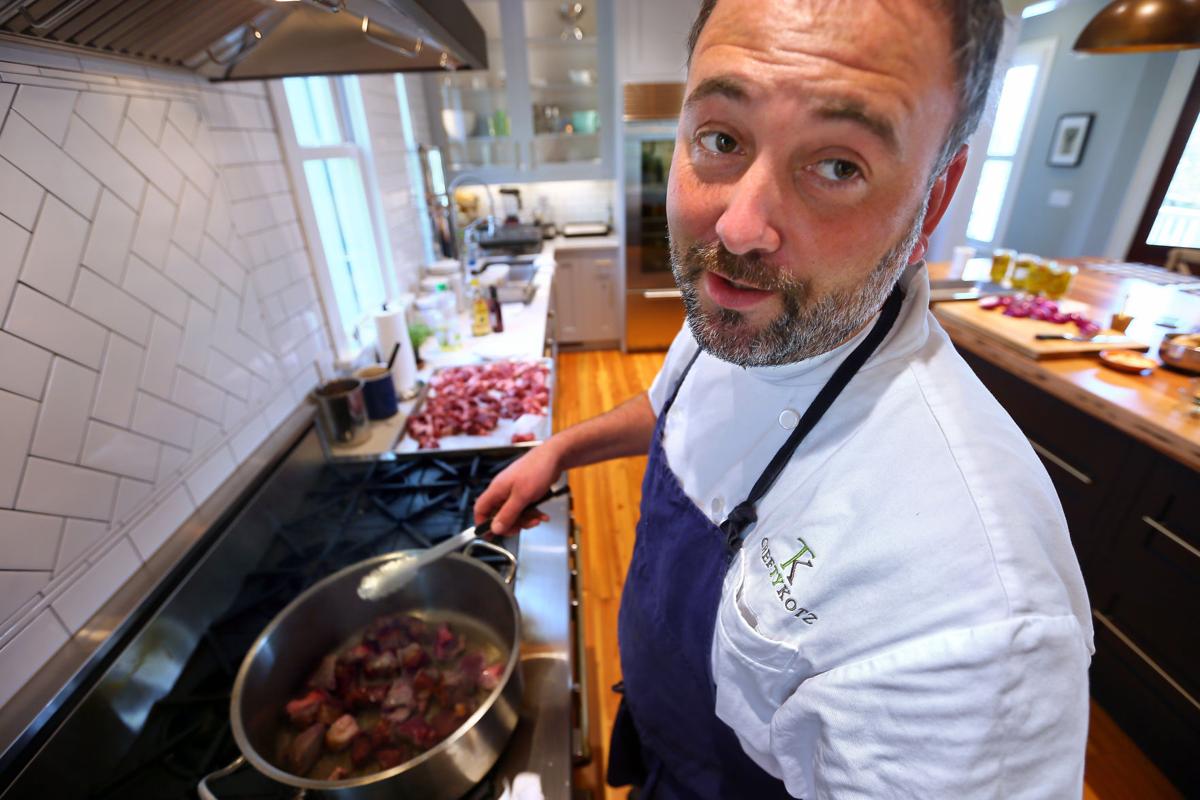 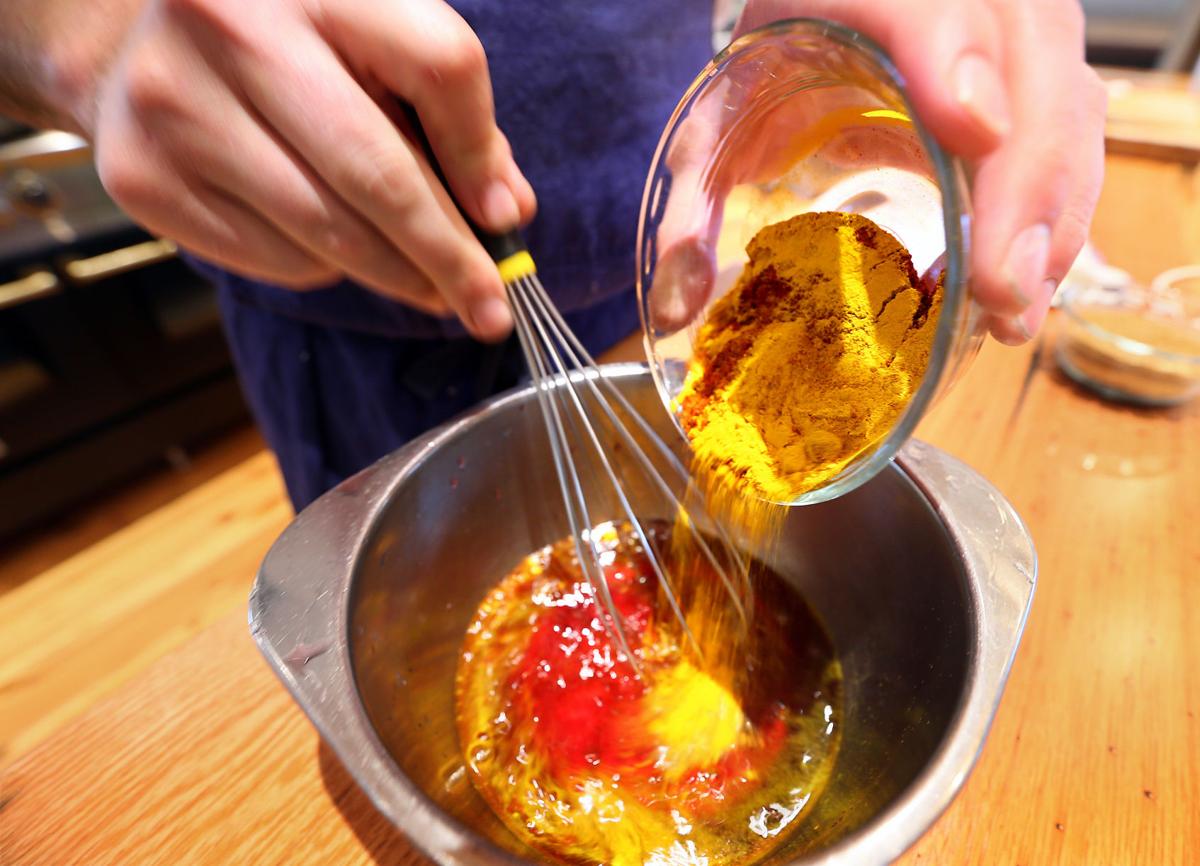 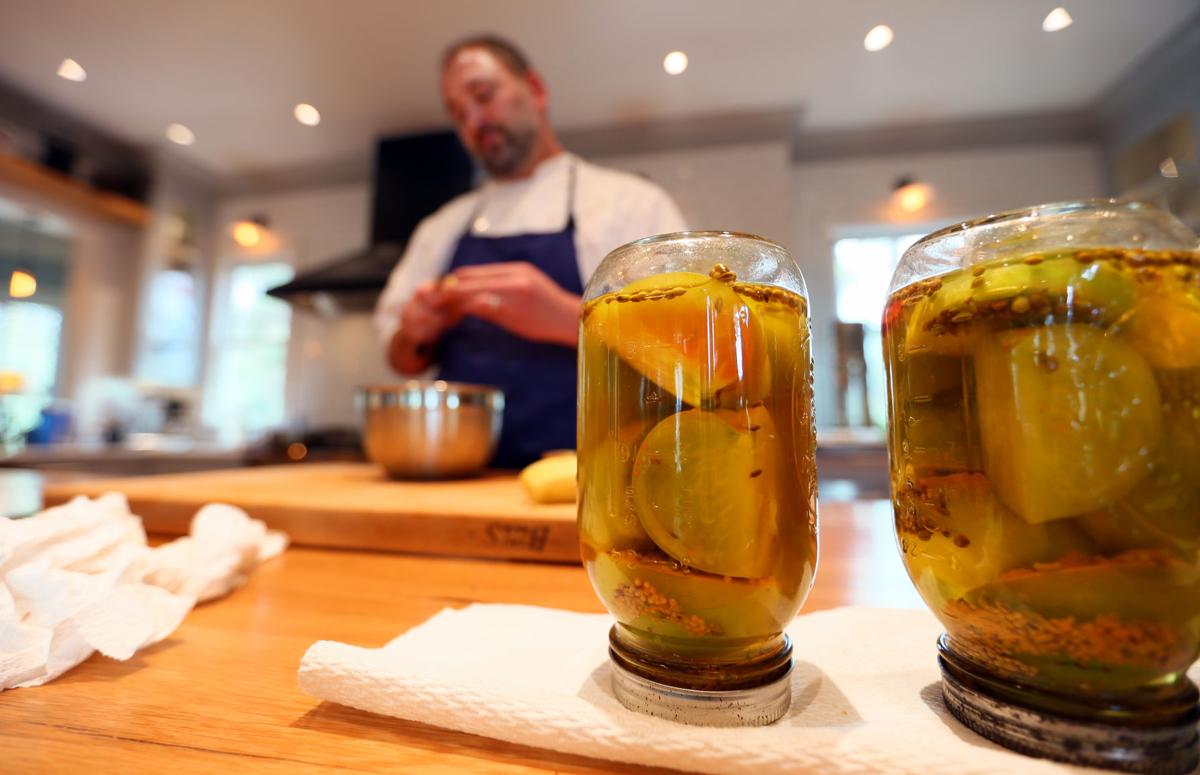 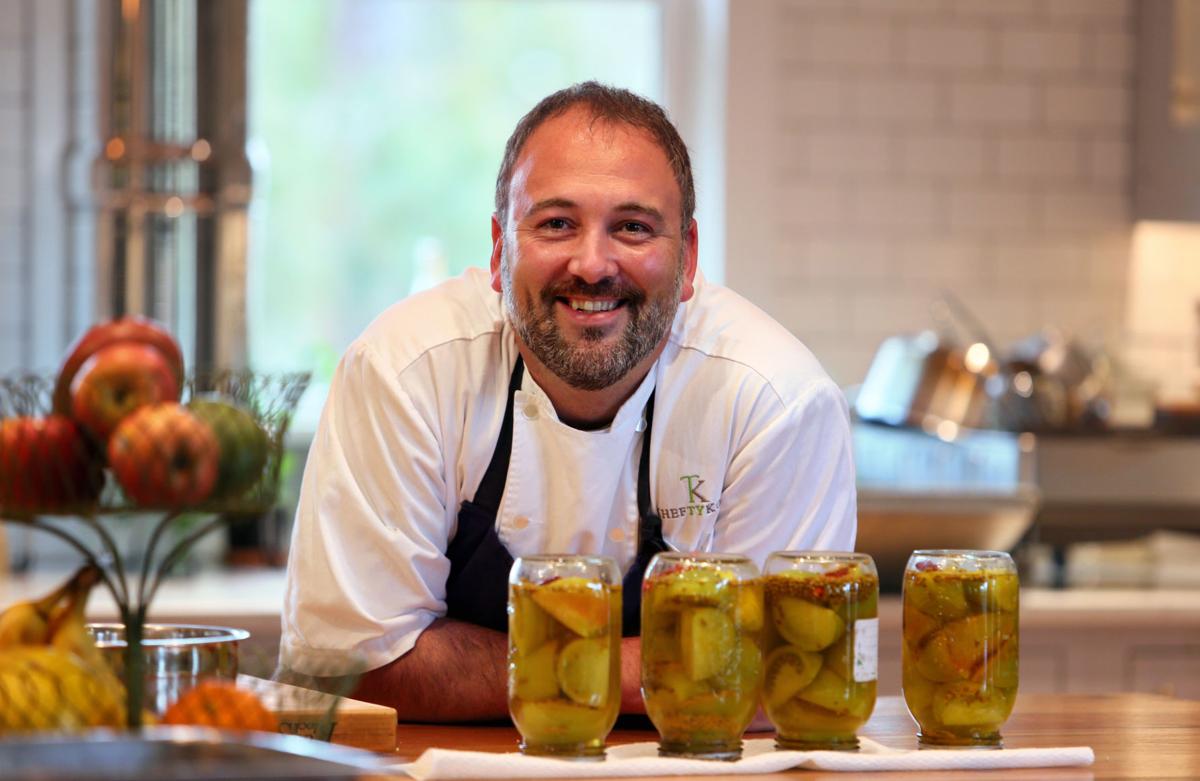 The whole point of hiring a personal chef, as even a half-finished website advertising the service will tell you, is you don’t have to cross the kitchen threshold before, during or after your event. If you want to spend the meal sprawled out on your ratty living room sofa, that’s fine. And if you don’t want to get off a plywood dance floor in the backyard just to fetch dessert, that’s OK, too.

Still, most clients can’t resist peeking. They’re curious how a dozen picture-perfect tuna stacks could have been assembled in their teeny-tiny workspaces. They want to know how the visiting chef is getting along with the family dog. Or they just want to express their gratitude, which is why the hostess of a recent dinner party on the backside of Rainbow Row sidled out of her seat before dessert.

“Are you happy?,” chef Ty Kotz asked her.

Boy, was everybody happy. Part of the cheer stemmed from little things, such as the gleam of the silver trays beneath crab cakes with tamarind chutney, and the depth of the Bordelaise sauce that Kotz applied to beef tenderloin. Mostly, though, it seemed like Kotz, his clients and their guests were exhilarated by the format, which instantly solves every problem posed by restaurants.

From my standpoint at the kitchen sink, where I was serving undercover as Kotz’s sous chef, I could see not only all of the above, but also was able to catch a glimpse of what it might mean. As I piped pimento cheese onto fried green tomatoes the size of demitasse saucers, it occurred to me that we surely weren’t the first non-family members to cook in that centuries-old home.

Which is to say: For all but a fraction of human history, the better-off have managed to entertain without the help of restaurants. Until 1868, when Delmonico’s boldly consented to host a ladies’ social club, unchaperoned women weren’t even permitted in public dining rooms. Although it’s hard to remember in the precocious United States, 150 years is a mere blip.

Restaurant-going is really more of a fad than hallowed practice. And it’s becoming increasingly difficult to sustain: Between the perpetual shortage of employees and parking places for diners, not to mention mounting complaints about dining room noise, declining service standards, rising food costs, reservation hassles, immigration crackdowns and workplace conditions, it’s astounding that so many mid-range restaurants have survived (by contrast, palatial hotel restaurants and Chipotle-type luncheonettes are assuredly long for this world.)

In the face of the personal chef model, which offers a restaurant-style experience at home for as little as $50 a person, it suddenly seemed to me like their luck might run out.

I ran my theory by Paul Freedman, a Yale historian who in 2016 published "Ten Restaurants That Changed America." Despite all the good that restaurants have done to shape tastes and challenge societal norms, Freedman said, there’s nothing to guarantee their continued importance — particularly in the South, where diners were coaxed out of their homes relatively recently by liberalized liquor laws.

“It’s a familiar thing,” says Freedman, who fondly recalls the years he spent in Nashville. “Here in the Northeast, it would be like archaeology to go back to dinner parties: We’d have to rediscover it, because the memory is gone. In Charleston, you’ve got a still-breathing model of home entertaining.”

Personal cheffing, which runs the gamut from showing up at the start of the week with an armful of frozen lasagnas to the elegant parties that Kotz prefers, is such a new enterprise that almost every chef consulted for this story wasn’t aware of anyone else in the same line of work.

Yet in the Charleston area, there are dozens and dozens of skilled chefs who’ve lately traded the rigors of restaurant jobs for self-employment. Thumbtack, an online site for service professionals, lists 63 personal chefs in the vicinity of downtown Charleston, compared with 61 lawn care experts.

Unfortunately, there aren’t any official statistics to back up anecdotal evidence that the field is growing quickly, such as the random guy at Dock Street Theater last month who regaled friends at intermission with his grand plan to give up his career and become a personal chef.

Because the overall number is still so small, the only state in which the Bureau of Labor Statistics can count private household chefs with statistical accuracy is California. The agency in 2016 estimated there were 370 personal chefs nationwide. To put that population in perspective, the same report showed 513,200 fast-food cooks.

Being out of the government’s sight might hold some appeal for chefs worn out by the paperwork that comes with running a kitchen these days.

“So many chefs are getting out of fine dining,” says Chris Spear, a Washington, D.C., chef who in January launched a private Facebook group called Chefs Without Restaurants. It now has hundreds of members.

“Look at (Charleston’s) Jeffrey Stoneberger: He’s worked at some of the best restaurants in the country, and he’s just making ramen,” Spear continues. “In D.C., Jen Carroll just launched her own event thing, and she was on 'Top Chef.' We don’t want to work until two in the morning anymore.”

Straight to the source

Kotz exactly fits the profile, having held top positions at Danny Meyer’s now-closed Tabla and Tom Colicchio’s Topping Rose House. “That’s what makes this interesting: I should be in a restaurant right now,” he says. Like Spear, though, he switched to personal cheffing to spend more time with his family. The only problem is, personal chefs are now so in demand that he’s struggling to not overschedule himself.

Finding the willpower to maintain the work-life balance they sought is one of the few significant challenges cited by chefs who’ve gone independent. Another is advertising. As Spear says, “you don’t have a brick-and-mortar for people to see,” nor is there a central online clearinghouse of chefs-for-hire that diners can access as easily as OpenTable.

Perhaps the biggest hurdle for personal chefs is sourcing, an issue that’s pronounced because so many chefs leave the restaurant track disenchanted with the premade sauces and commodity meat that high-volume venues frequently buy. They’re determined to buy ingredients from small producers, but it’s essentially impossible for a rancher to sell a pair of lamb chops to a chef planning a romantic dinner for two. One of the reasons that Spear started his Facebook group is he envisioned partnering up with other personal chefs on bulk purchases.

Jason Houser, the former Tattooed Moose chef who picked up a James Beard nomination while at Muse, keeps his food costs down by shopping at Doscher’s IGA. He calls his rich stock, made from chuck ends and chicken feet, the “Doscher’s Special.”

As a personal chef, Houser says, he’s dealt with every possible kitchen situation, including refrigerators without a spare inch of storage space and ovens that barely function. On the other end of the luxury spectrum, he’s cooked in homes where the guests drink wine that costs more than his knife set.

Houser says he’ll entertain just about any request, and like all personal chefs, prides himself on working closely with clients to develop menus that meet their expectations without exceeding their budgets. Once, a woman asked him to prepare seven vegan courses for a group of eaters in their pajamas. So that’s what he did.

On the night I joined Houser, he was cooking for a bachelorette party in a rented Cannonborough-Elliotborough house. Over a leisurely few hours, he served arugula salad spliced with manchego and citrus, chicken confit with sorghum jus and braised Swiss chard, and panna cotta sauced with a Riesling reduction. At intervals, various guests wandered away from the table on the back porch to lie down or cry, activities that would have been hard to pull off in a restaurant. One woman came into the kitchen.

“Are we going to get the leftovers?” she asked. Upon learning that the group could keep what it didn’t eat, she smiled: “I don’t know this fantasy situation.”

At least in Charleston, that kind of unfamiliarity seems destined to fade away.