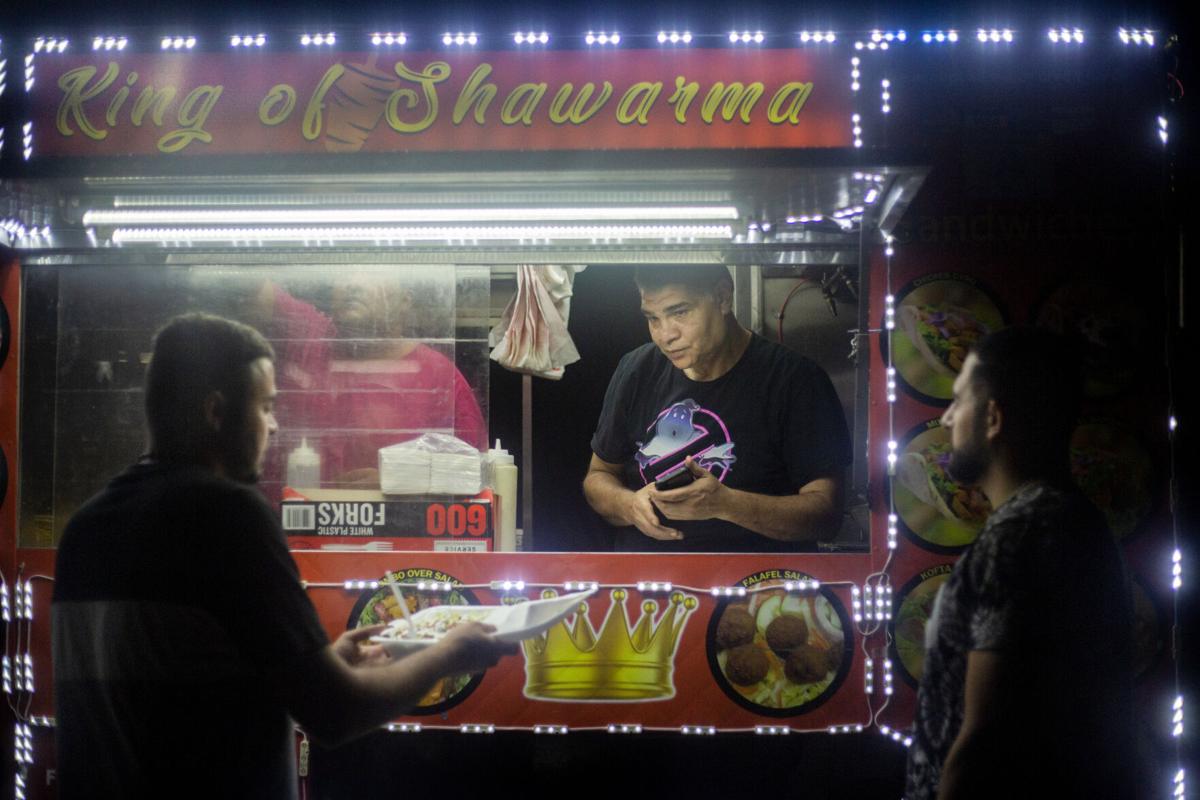 Said Hussein and Bayoumy Adelnaser serve food from the King of Shawarma trailer on King Street on July 9, 2021 in Charleston. Street food vendors downtown are now being shut down at 1:30 a.m. for public safety reasons, which is impacting the vendors' income. Hadley Chittum/Staff 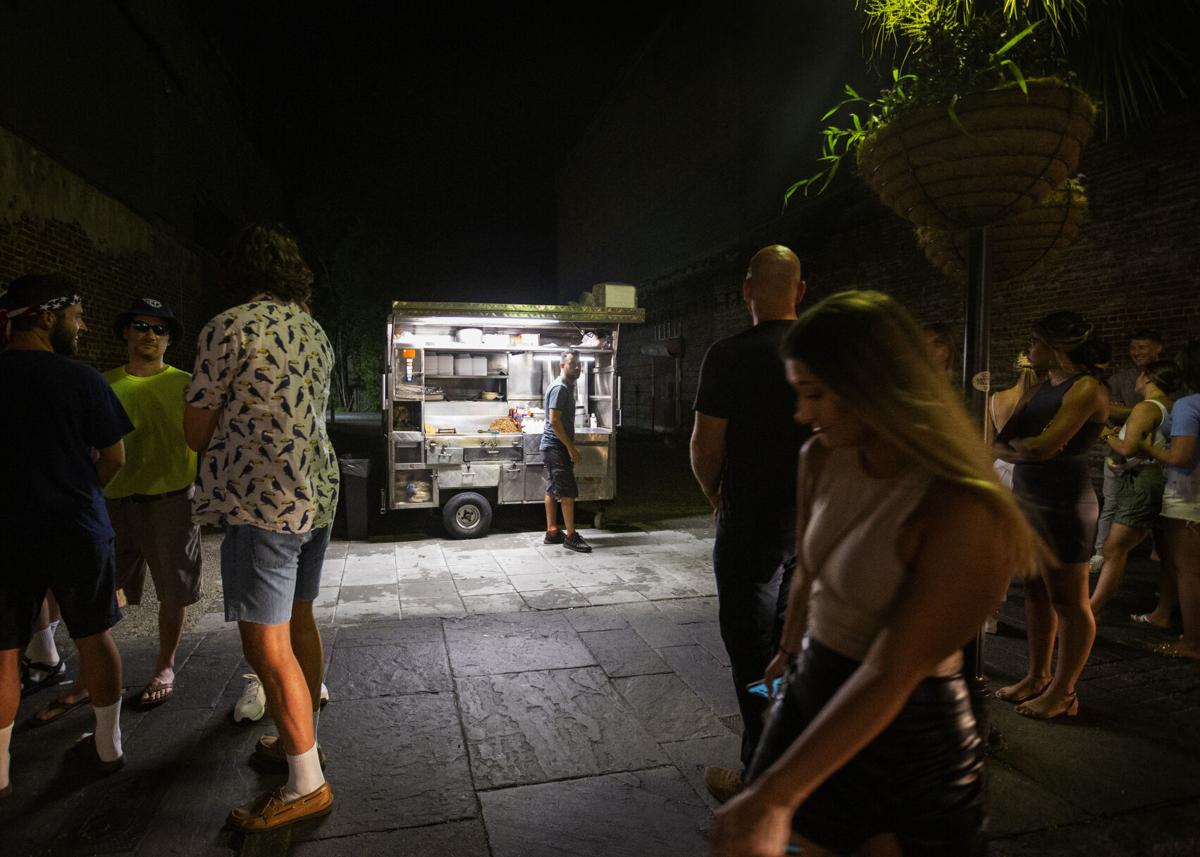 A line to get into Uptown Social bar extends down King Street past a street food vendor on  July 9, 2021 in Charleston. Street food vendors downtown are now being shut down at 1:30 a.m. for public safety reasons, including to prevent late-night long lines and crowding, which is impacting the vendors' income. Hadley Chittum/Staff 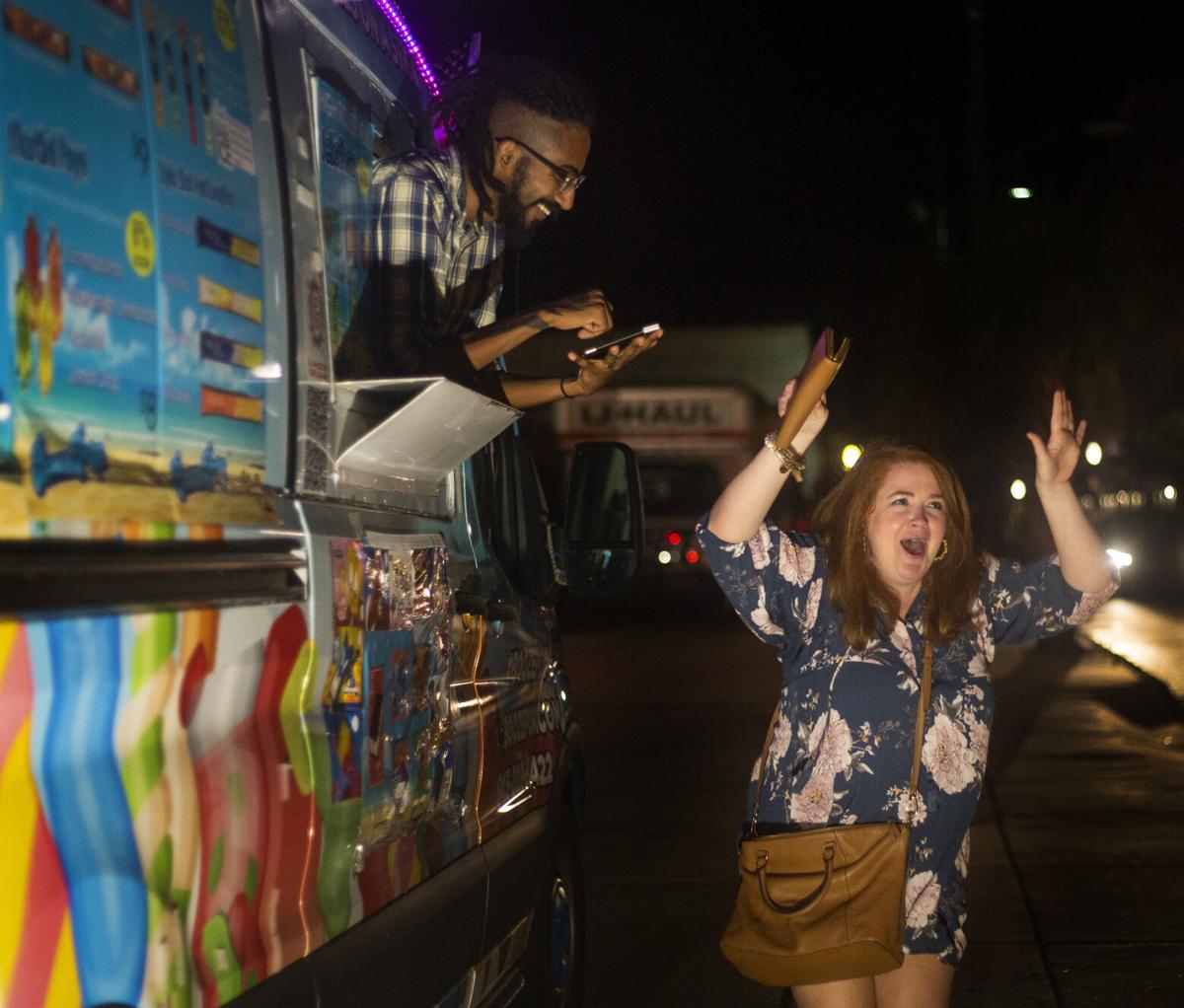 Haley O'Conner dances after buying a popsicle from the Booze Pops truck on King Street on  July 9, 2021 in Charleston. Street food vendors downtown are now being shut down at 1:30 a.m. for public safety reasons, which is impacting the vendors' income. Hadley Chittum/Staff 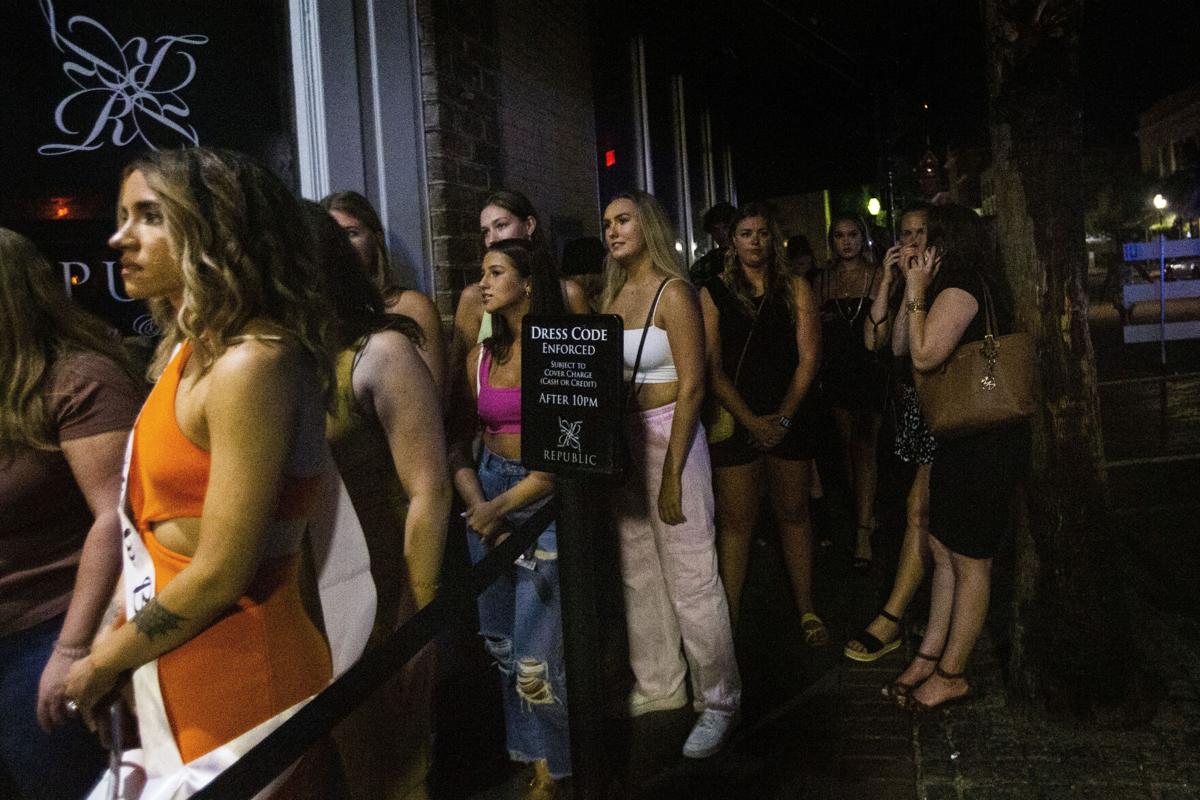 A line of people waiting to get into Republic Garden and Lounge Bar extends down King Street on July 9, 2021 in Charleston. Street food vendors downtown are now being shut down at 1:30 a.m. for public safety reasons, including to prevent including to prevent late-night long lines and crowding, which is impacting the vendors' income. Hadley Chittum/Staff

According to owners and employees of the area's food stands, vans and trucks, the new curfew has forced them to shut down and stop monitoring the crowds, like they typically do, during the busiest time of night after the surrounding bars close at 2 a.m.

The ordinance, passed by Charleston City Council on June 30 after discussions with the Charleston Police Department, was enacted to address public safety issues late at night in the central business district.

The ruling was made in hopes to clear late-night crowds from King Street faster and also pushes the vendors 10 feet back from the sidewalk in order to not obstruct pedestrian pathways.

"The problem was that people would just congregate (by the food vendors)," said Lt. James Byrne of the Charleston Police Department. "And when you have large crowds and intoxication and people standing in line, arguments and fights and violent crime happen. We saw that materialize many times at the end of last year and beginning of this year."

Mohamed Bayoumi, an Egyptian immigrant who owns three of the four Gyro Food Stand carts along Upper King Street, said the food vendors being present into the early hours of the morning served as a benefit to public safety.

"Sometimes there are no cops in the street, so if something happens, we're here," said Bayoumi, whose Mediterranean food carts have been serving King Street for seven years. "We make extra eyes and ears."

Bayoumi's uncle Mohammed Mohammedi, who owns the fourth Gyro Food Stands cart, said that in addition to assisting people by handing out free waters and calling ride shares for them, he's waited with women who were trying to evade predatory men from bars.

Woody Norris, an Army veteran and owner of Booze Pops, which operates out of blue vans decked out with lights and speakers that offer up alcohol-infused popsicles and kid-friendly ice cream, said the food vendors serve as known safe havens along King Street with their bright lights common gathering points to wait for Ubers.

"There haven't been any violent incidents at my vans or the food carts since opening," said Norris. "And it's not making it any safer by taking away our lights that light up these dark parking lots."

"It's good to have an extra pair of sober eyes out there," he said during a City Council meeting leading up to the passing of the ordinance. "I can’t imagine better help if there’s some trouble."

Lt. Byrne said that food vendors aren't necessarily an ideal way to light up dark areas along the street, and he wasn't sure if the benefit gained outweighed the risk of having people on King Street later into the night.

Charleston food trucks and carts must close by 1:30 a.m. under new rules

Bar-goers on a Friday night told The Post and Courier they often turn to street vendors' food and free water to sober up after partying, and those who work at the bars also need a place to eat after their shifts end.

"It's imperative that we have this option after getting out of the bars," said bar-goer and street food vendor frequenter Elliott Getz. "What else are you supposed to do to sober up? You have nowhere else to go. You can't send drunk people back home without a belly full of food."

Bayoumi said in addition to having to turn away hungry customers, he's losing around 80 percent of his income with the 1:30 a.m. closing time, since a majority of his customers come between 1:30-3 a.m. It's been devastating to his family business, which is his only source of income.

Meanwhile, other brick and mortar locales along the street are allowed to stay open later, causing bar patrons to wander longer in search for those establishments instead of the food vendors which would usually be right around the corner.

Food vendors argue that if they must be subject to this ordinance, then so should Benny Ravello's and Gilroy's Pizza Pub, now the only post-1:30 a.m. options for satisfying King Street's communal drunk hunger.

Those lines, along with notoriously long bar lines, are much more responsible for crowding the sidewalks than food vendors, said Bayoumi.

Like the permanent businesses in the district, street food vendors rent their allocated spaces, mostly empty lots or nooks between brick and mortars, and pay a 2 percent hospitality tax and local and state taxes to operate.

"This isn't how America works," said Bayoumi. "I came to this country because the justice, but what they've done to us is not fair at all. What's the difference between our business and their business?"

But, better yet, all should be allowed to stay open at least for some time after the bars close to help sober up and provide a safe spot for drunk people turned out onto the street, the vendors agreed.

"It's just making drunk people make worse decisions," offered Antonio Brown, owner of Chris & Tony's Flame in the U-Haul parking lot by Spring Street, who's been hoping to set up chairs as a resting place for people who have left the bars.

"If you actually go and get your food and sober up, you're usually fine or at least have some time to chill and call an Uber," he said.

Charleston City Council member Peter Shahid said that, at a certain point in the night, the party needs to end.

Bayoumi argues his business is not about extending the party, but providing a service to the partiers after it's over.

No more sidewalk samples on King Street, near the Market — ban goes into effect Wednesday