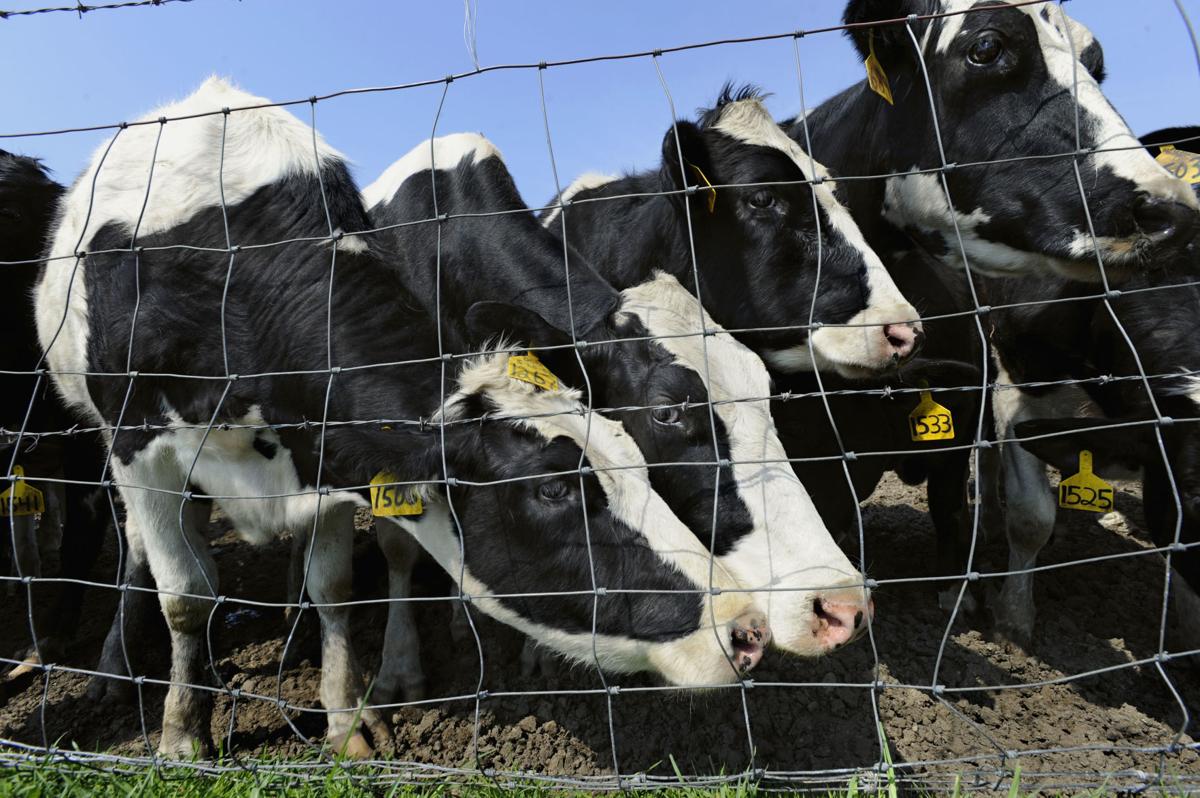 FILE- In this May 3, 2011, file photo, beef and dairy cows graze on a farm in Thompson, Conn. Connecticut officials are joining other states in educating local farmers about how to mitigate public health risks as more people visit their farms. State and federal officials are holding a conference Wednesday, Aug. 24, 2016, in Hartford, Conn. to discuss topics ranging from preventing E. coli outbreaks to safely preparing food on the farm. (AP Photo/Jessica Hill, File) 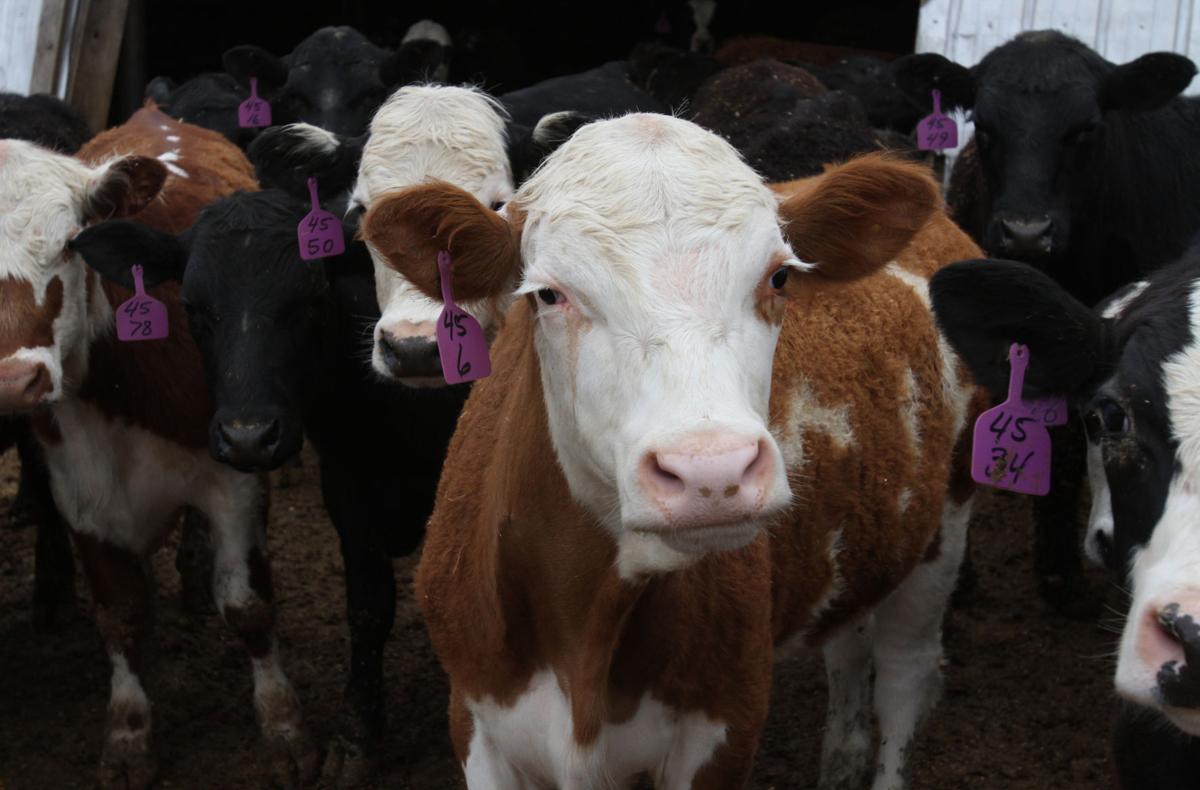 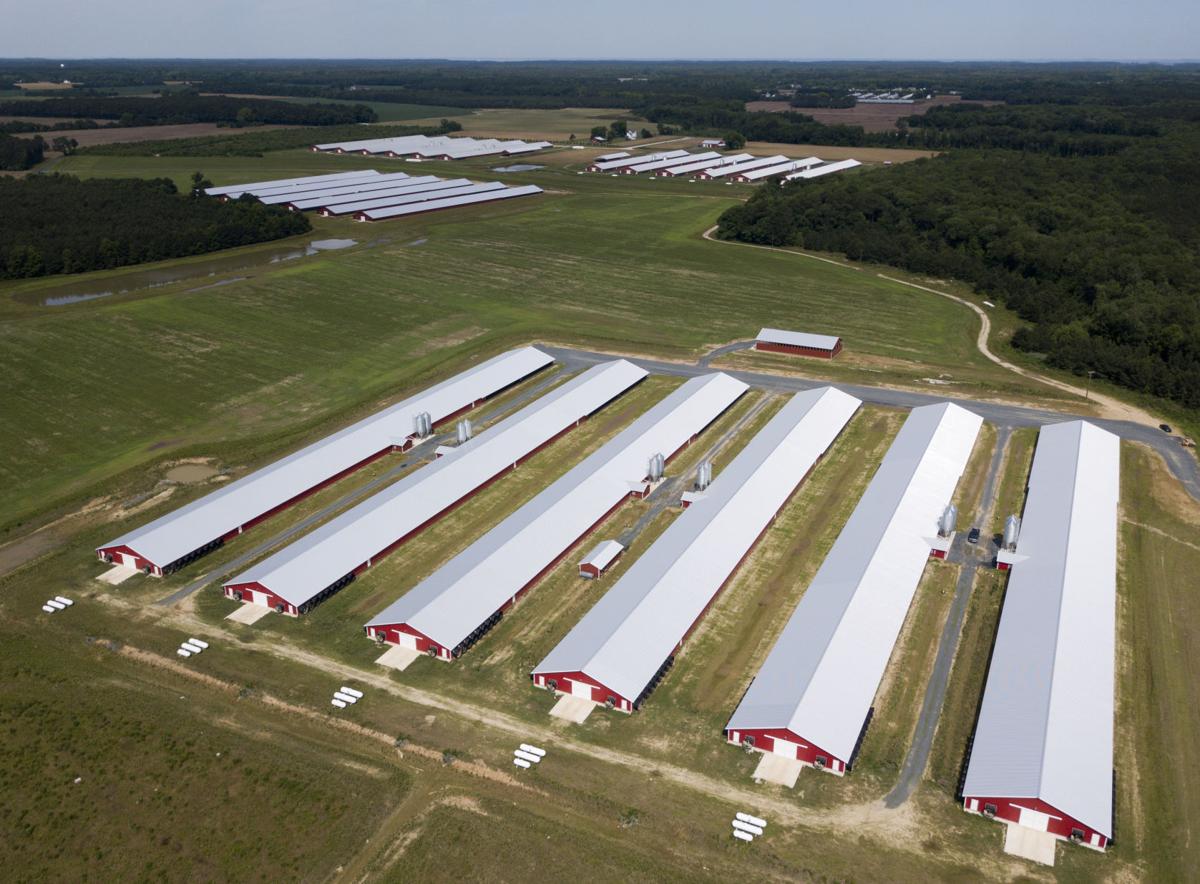 The morning sun rises over a complex of 24 chicken houses at the Seaside Farm in Locusville, Va., Tuesday, June 5, 2018. Chicken has a lower carbon footprint than beef, but a higher one than plant-based foods. (AP Photo/Steve Helber) 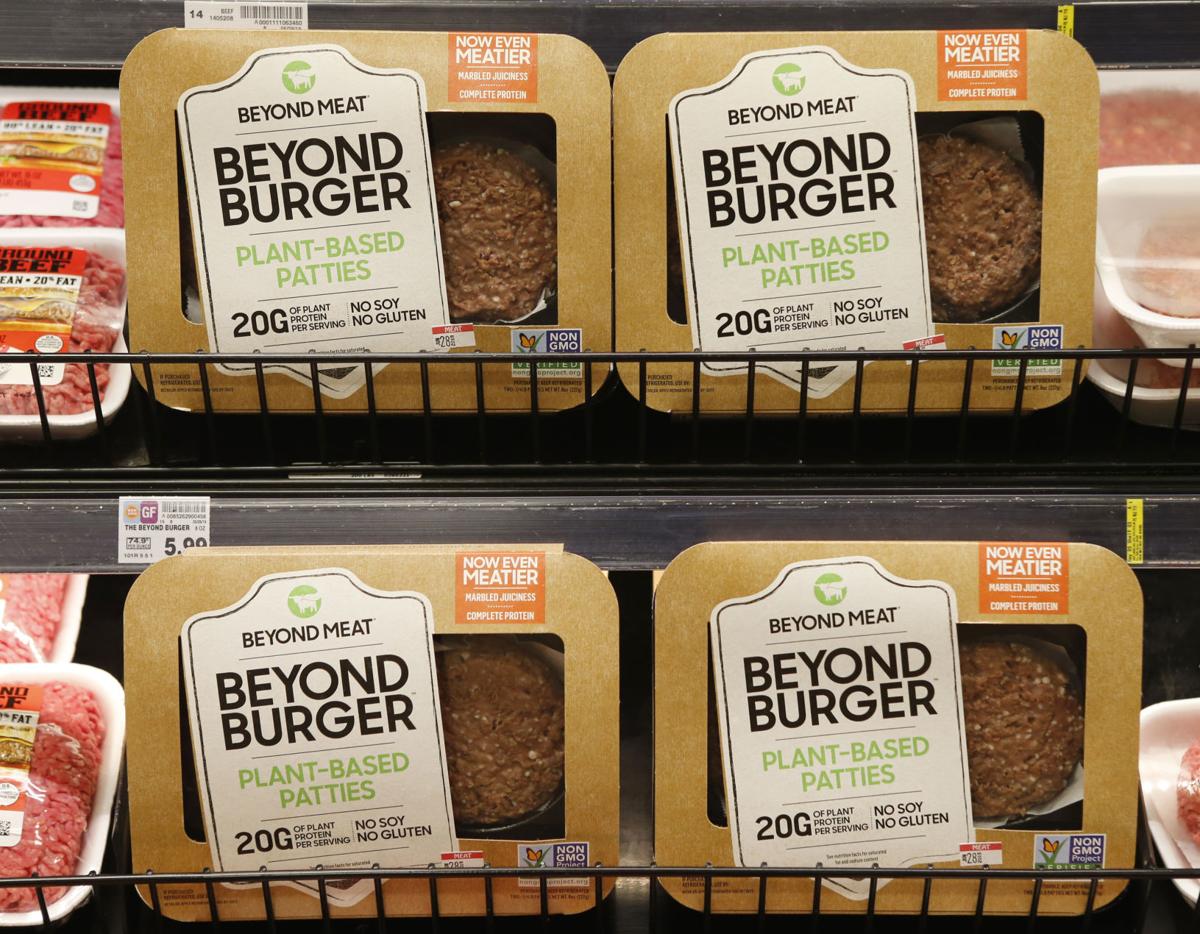 A meatless burger parry called Beyond Burger is on display at a grocery store in Richmond, Va., Thursday, June 27, 2019. (AP Photo/Steve Helber) 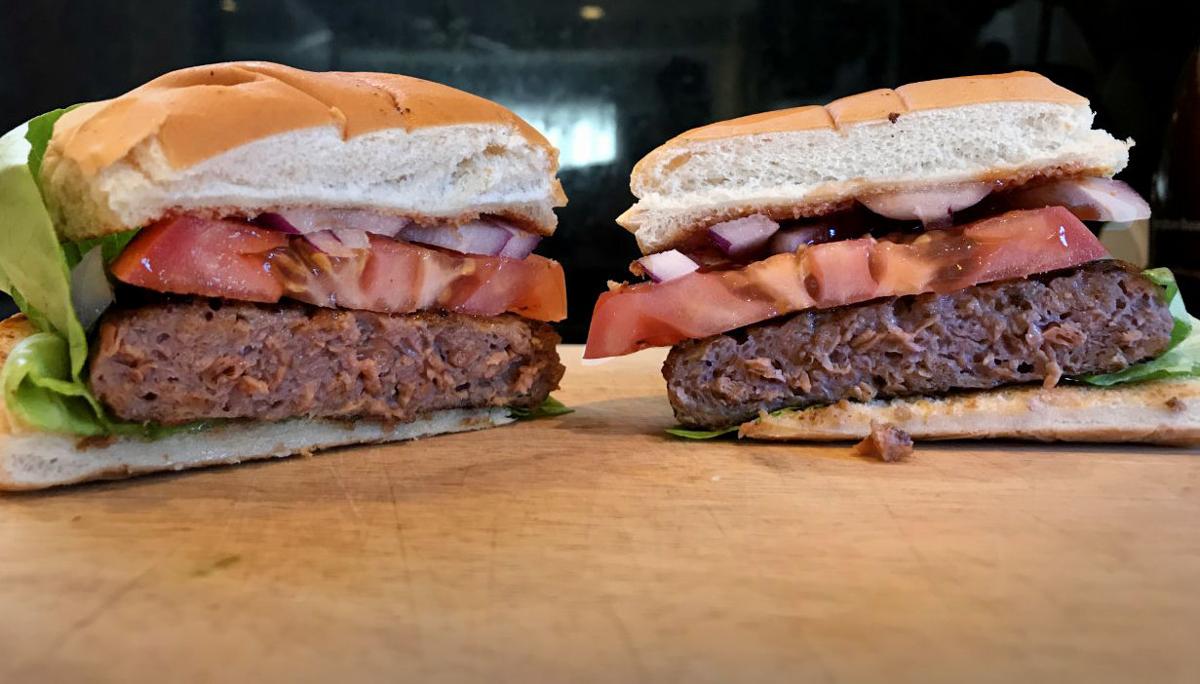 A Beyond Burger cooked in the author's kitchen. The patty wasn't a convincing replacement for meat. Staff/Chloe Johnson

All I wanted was chicken soup.

It was the second day of January, and like much of the rest of the world, I was suffering from New Year doldrums. The holidays had come and gone; a gray, chilly month lay ahead, and on top of it all, I had a cold.

Typically, I'd pair a regimen of DayQuil with a rendition of my mother's signature dish: a soup so jam-packed that the rich broth barely bathes the chicken, egg noodles, carrots and bok choy.

But like many of my millennial peers, I decided to stretch myself this January. Several friends had chosen an alcohol-free "Dry January," but I'd chosen to instead cut out meat (with the exception of fish) and curb my egg and dairy intake.

As a voracious eater and frequent home cook, I wanted to challenge myself by setting boundaries on my diet for a month. I was also eager to try some of the newer meat imitations on the market, and see how they stacked up.

But the decision mostly stemmed from my work reporting on climate change. I've written several times about measures that can reduce planet-warming carbon emissions, and whether policy makers are adopting them.

That work has made me consider the many ways people contribute to these emissions. So I decided to try one of the more offbeat approaches to reducing that footprint myself and dabble in vegetarianism.

The results were often delicious, and ultimately, not as challenging as I'd feared. I've come away with a new perspective on my diet and more confidence as a cook.

But first, a quick science lesson: how, exactly, is eating meat connected to greenhouse gasses?

Every step on food's journey to the table requires resources, such as fertilizer to grow crops; feed to fatten animals; packaging to protect both after processing and fuel to transport them to customers.

But peer-reviewed science from around the world has shown one consistent trend, Heller said. Meat and animal products are higher up the food chain, and take more energy to produce than plant-based foods. They leave a bigger carbon footprint.

Cows' four stomachs let them convert grasses and other plants inedible to humans into meat and milk. But all that digestion leads to a lot of methane, estimated to be as much as 30 times more potent in warming the planet than carbon dioxide.

That's part of why beef accounts for 4 percent of food production by weight, but 36 percent of greenhouse gas emissions in the food industry, according to a 2014 study by Heller.

Generally, scientists understand that swapping out beef for other meats will somewhat reduce the impact of your plate, but plant-based protein is the safest bet.

Transitioning away from meat

Brie Turner-McGrievy has run several studies on the health outcomes of vegan and vegetarian diets at the University of South Carolina. In studies where participants have transitioned from an omnivorous diet to one that eliminates animal products, she says, "a lot of the time they just switch to salads."

That's a recipe for staying hungry all day, she says. Instead, Turner-McGrievy advises a diet rich in beans, sweet potatoes and other high-fiber, starchy foods.

So I jumped into my diet determined not to get stuck in a pattern of sad desk salads. I resurfaced recipes that were old favorites, like a vegan red lentil soup with carrots. In other dishes, I found it somewhat easy to simply remove the meat, like the cold salad of buckwheat soba noodles that I often bring for lunch.

I also resolved not to lean too hard on fish, eggs or cheese to make up the difference, because they also have higher carbon footprints than plants. Instead of a typical breakfast of boiled eggs and toast, I ate overnight oats, made with coconut milk and layered with peanut butter and berries.

While dairy and eggs can be a source of protein, Turner-McGrievy said the nutrient is in all kinds of food.

"The recommendations are about 10 percent of energy from calories (should come from protein)," she said. "In all our studies, vegan participants always get that. It's really not that hard to meet that."

I did find myself somewhat intimidated at the prospect of eating out, and did so less than usual. That was probably unnecessary, because I can't say I had a bad experience at a restaurant this January.

A standout meal was at local soup chain Ladles, which has a long-running Vegan Friday special. One week featured a fried green tomato sandwich with tempeh bacon and a vegan pimento cheese spread. The sandwich was a great meal I'd happily have again, dietary restrictions notwithstanding.

I did not, sadly, find an adequate meat-free substitute to sate my chicken soup cravings.

Despite a vegan friend advising that most meat substitutes "taste like disappointment," I did find one standout I'd eat on any given night: Uptons Naturals chorizo seitan crumbles.

Seitan is made out of wheat gluten, the protein that gives bread structure. Although chewy, the texture was more convincing than any other mock-meat I ate, and it came out of the package already well-seasoned.

I didn't taste the Impossible Whopper, unfortunately, because of Charleston's recent drought of Burger Kings. But I did manage to fry up a Beyond Burger one Saturday afternoon, a journey deep into the Uncanny Valley of Meat.

In the package, the 4 oz. patties, made of pea protein, looked somewhat gray and wan. They emitted an impressive amount of fat in a cast iron pan, developing a deep brown crust. The smell of it cooking was not beefy, exactly, but decidedly gamey, similar to an odor I'd associate with ground lamb.

I first took a bite of the patty alone, which was probably a mistake. It was sweeter than I expected, with a chemical whiff that told me it was highly processed. Combined with tomato, lettuce, onion, ketchup and bun, the effect was more pleasant, but not convincing.

I don't think it'll be a common part of my future diet, and health-wise, that may be a good thing.

"The Beyond Burger and the Impossible Burger are really there to mimic everything about meat," Turner-McGrievy said, and so they use comparable amounts of fat to ape the flavor and mouthfeel of meat.

The back of the package also indicated one patty had 390 milligrams of sodium, 16 percent of the daily recommended total.

Overall, I enjoyed a month-long experiment in (mostly) plant-based eating. I didn't find that I missed much of the carnivorous world.

I had bigger intentions than just a diet, of course — I wanted to see how my life would change by taking an action to reduce my personal carbon footprint. The reality is that it didn't change much.

But if the food I ate wasn't tasty in its own right, I don't think a sense of doing good alone would have propelled me through the month. I had other advantages that made January easier than it might have been: Without a spouse or children, I didn't need to account for the tastes of other eaters in my cooking.

These days, Heller said he rarely eats meat, and is raising his children on a mostly vegetarian diet. Red meat in particular is saved for special occasions.

I'm not sure yet whether I'll turn this experiment into a long-term habit, or whether it might make sense to simply treat meat as a luxury, as Heller has.

Either way, I'll probably still make myself chicken soup every so often.