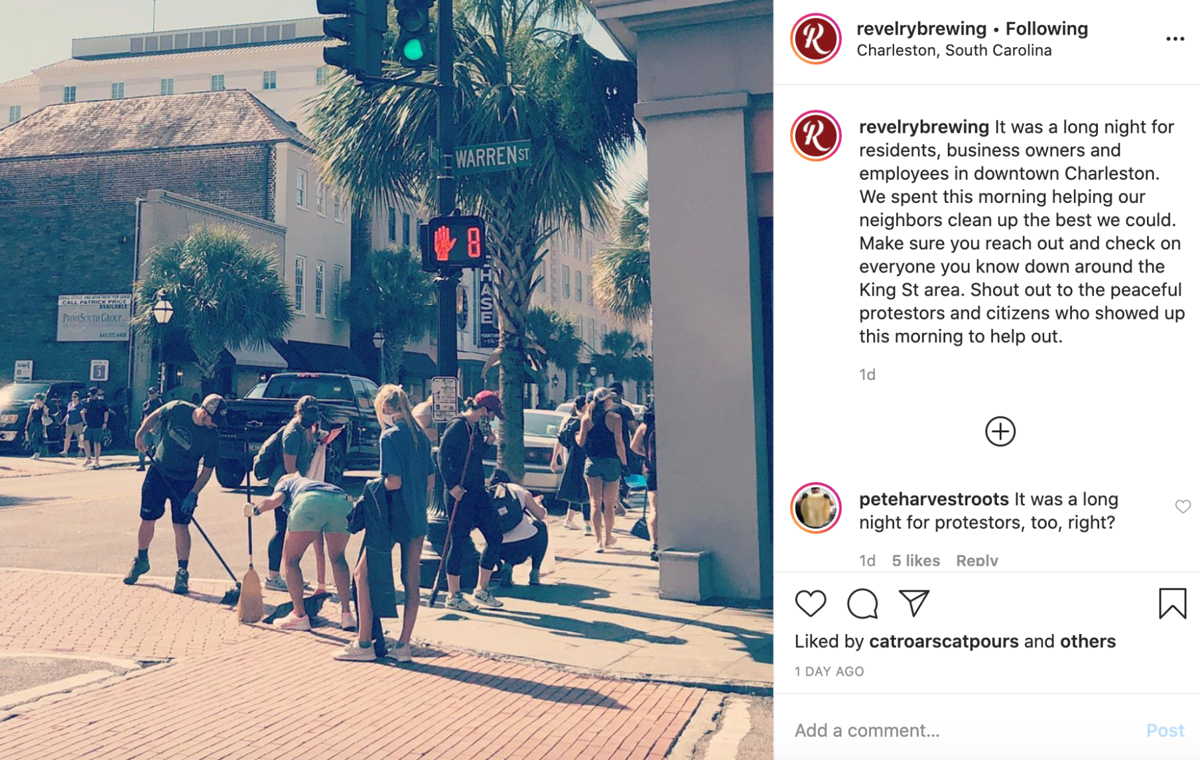 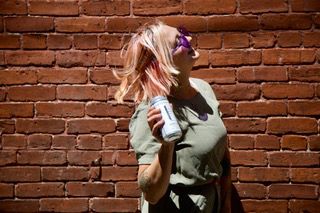 Ana Richards, shown here prior to the protests and coronavirus pandemic. James Coulter/Provided

Two-plus months into the coronavirus pandemic, Charleston area craft breweries have become savvy at communicating their growler deals, curbside pickup procedures and even their grief for fallen colleagues via social media, Instagram in particular.

But after a tumultuous weekend of civic unrest, the Lowcountry's beer-makers find themselves with a tough call on their collective hands: To post, or not to post?

A review of the Instagram accounts of all the breweries permitted by the S.C. Department of Revenue to produce beer in Charleston County revealed the vast majority decided not to post explicitly about the protests and riots that rocked the city's downtown over the past three days.

"I think a lot of people (running breweries' social media) are kind of scared about what to say, or people don't know what they can say," said Ana Richards, a social media consultant in downtown Charleston who also runs the beer influencer account on Instagram @beergirlmeetsworld.

Part of the reason they may say the wrong thing is that most brewers cannot draw on personal experience in moments of racial injustice, because they are white. Across the country and here in Charleston, craft brewery ownership and labor alike tend to be very white. According to a Brewers Association blog post about the industry's diversity updated in February, non-manager craft brewery production workers were over 75 percent white, while owners of breweries across the U.S. are nearly 90 percent white.

Social media missteps, particularly around the issue of race, are scary stuff for breweries' brand managers even in less charged moments. After all, one wrong post and you might wind up on an industry gadfly feed like @WorstBeerBlog, sort of a digital pillory where beer industry workers, owners and media types come together to gripe and grin about the latest online gaffes of the country's 8,000-odd craft breweries.

Lately, as protests and riots grip America's cities in the wake of the death of George Floyd, a black man from Minneapolis, that account has been rife with posts from breweries (none in Charleston) voicing controversial positions. A white policeman has been charged in the homicide.

Instagram posts of new "Blue Lives Matter"-themed beer labels and Facebook posts about needing more ammunition to shoot protesters are just a couple of choice examples held up for scorn.

By the Monday following the Holy City's own protests, some of which turned violent, Charleston's breweries had not posted any such full-throated support for the Lowcountry's law-enforcement community.

But neither had they posted in support of the Black Lives Matter movement, the umbrella group for the grassroots organization which helped coordinate Saturday's protest on the peninsula.

In fact, they have mostly stopped short of saying anything on the matter.

There are 29 licensed breweries operating in Charleston County. Between last Friday and close-of-business Monday, four of them had indirectly acknowledged the protests on their Instagram accounts when making posts about how the city's 6 a.m.-6 p.m. curfew would affect their taproom hours.

"I feel like there's nothing I can say that's even remotely helpful in any way," said Jaime Tenny, who in addition to overseeing North Charleston's COAST Brewing Co., handles its social media.

By midday Tuesday, its most recent Instagram post was a tribute photo to the Two Blokes Brewing's Matty Symons; breweries across the Lowcountry uploaded the photo as part of a coordinated effort to raise funds for the late brewer-owner's family.

At a time like this, added Tenny, who considers COAST's social-media presence a "bane" amongst her many duties there, "selling beer seems pretty irrelevant."

But there is beer to be sold, even at a time like this. So for breweries that lean heavily on Instagram to drive sales and clue customers into new offerings (which COAST, for the most part, does not), threading the needle can be a challenge.

Richards, who deviated from her own account's typical food and beverage content on Sunday with a post in support of Black Lives Matter, called it "disappointing" that some area breweries avoided mentioning the situation entirely and continued to post about their beer apace. "Breweries have to post about beer," she said, but they should "acknowledge what's going on in the community/world."

If they don't, they may run the risk of seeming tone-deaf to the black beer-drinking community and its allies.

"I would see that as them putting up the blinders," said David White Jr., black beer enthusiast who lives in downtown Charleston and runs his own lifestyle blog, The Dropping Pin.

But even acknowledgement, if not satisfactorily worded, can lead to trouble. The only craft brewery in Charleston County that did upload a post to Instagram directly addressing the weekend's events received decidedly uneven feedback on its message.

On Sunday Revelry Brewing, the award-winning Conroy Street outfit that has been a hub for beer lovers seeking sunshine since reopening in mid-May, posted a photo of the morning-after cleanup efforts on King Street, writing:

Most SC craft brewers will be forced to shut within months without more relief, guild says

"It was a long night for residents, business owners and employees in downtown Charleston. We spent this morning helping our neighbors clean up the best we could," read the post in part. "Shout out to the peaceful protesters and citizens who showed up this morning to help out."

The seemingly inoffensive message elicited heart and prayer-hand emoji in appreciation from the account's 28,000 followers. But for some users, the feel-good message appeared to deliberately elide the history of racial inequality and injustice that catalyzed the protests in the first place.

Another follower, Pete Halupka, chided: "It was a long night for protesters, too, right?" Other commenters accused the brewery of exercising white privilege by attempting to avert attention from the protests' underlying cause.

Owners Ryan Coker and Sean Fleming did not respond to The Post and Courier's multiple requests for comment before press time. After being contacted by the reporter, the brewery deleted all the comments from the post in question.

Brewers look to the 'black square'

But by Tuesday, Revelry had joined select Charleston breweries on Instagram in a new approach to acknowledging the situation, posting a completely blacked-out square to its grid.

By midday, at least half a dozen Charleston breweries had posted similar black "tiles," often using the caption #blackouttuesday.

In a real-time example of just how difficult it is to express one's value's via a platform designed for interminable scrolling rather than actual conversation, even this move is not without detractors.

The black-square trend is part of a social-media "blackout" that apparently originated in the American music industry earlier this week. It has quickly drawn skepticism from activists, who say it disrupts their ability to communicate vital information on the platform.

Plus, posting the black square for a day, like changing over a logo or brewing a specialty beer to celebrate LGBTQ+ pride, opens a brewery up to questions about what else it's doing to support those causes.

"As African Americans we've been fighting this fight for a long time, so I don’t really appreciate the breweries seeing it as just one day as a day to speak out," said White.

With the situation evolving so rapidly on social media, local breweries can't be expected to keep up. But if posting community-oriented notes rings hollow, going silent doesn't sit right and posting photos of beer risks accusations of tone-deafness, what ought Charleston's beer-makers do?

Richards, who operates Butterfly Social, a small social-media consultancy that has worked with area breweries in the past, offered a suggestion for any Charleston breweries that wanted to wield their social-media platforms for good but were unsure how to start.

"Instead of posting a black tile, why not post a black-owned local business to support today?" she said.

After all, though the week may feel interminable to some, #BlackFoodFridays will be here again soon enough.