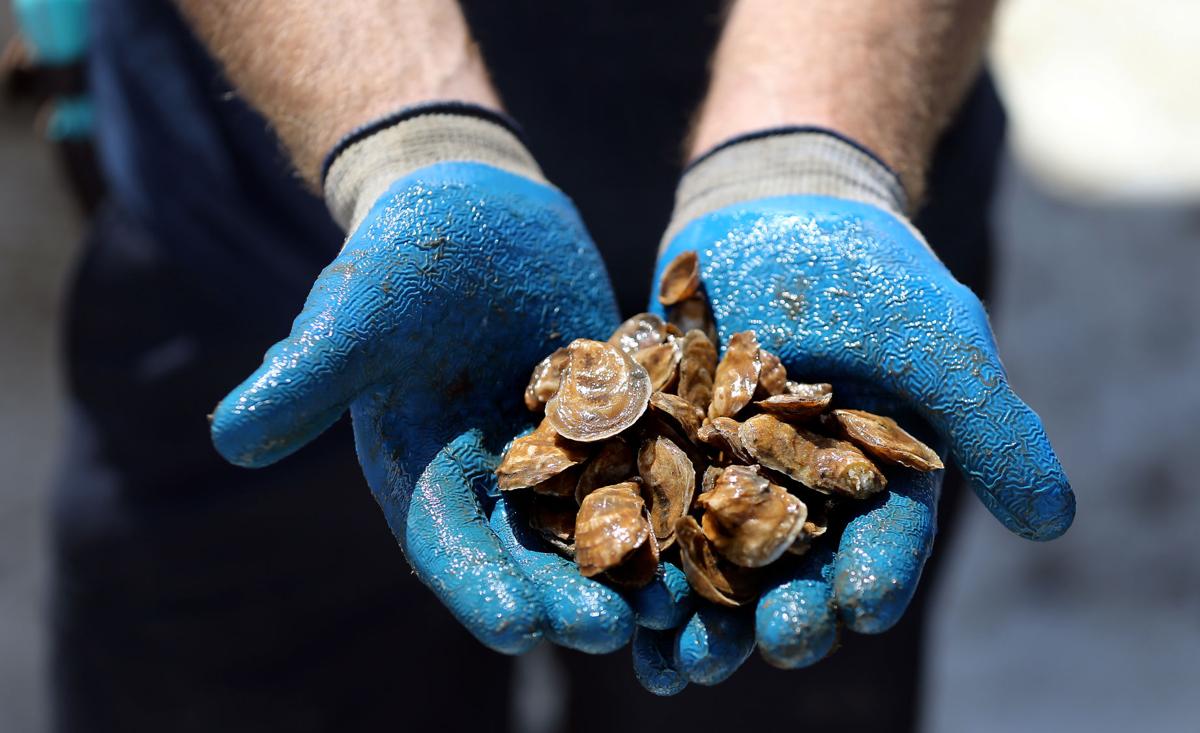 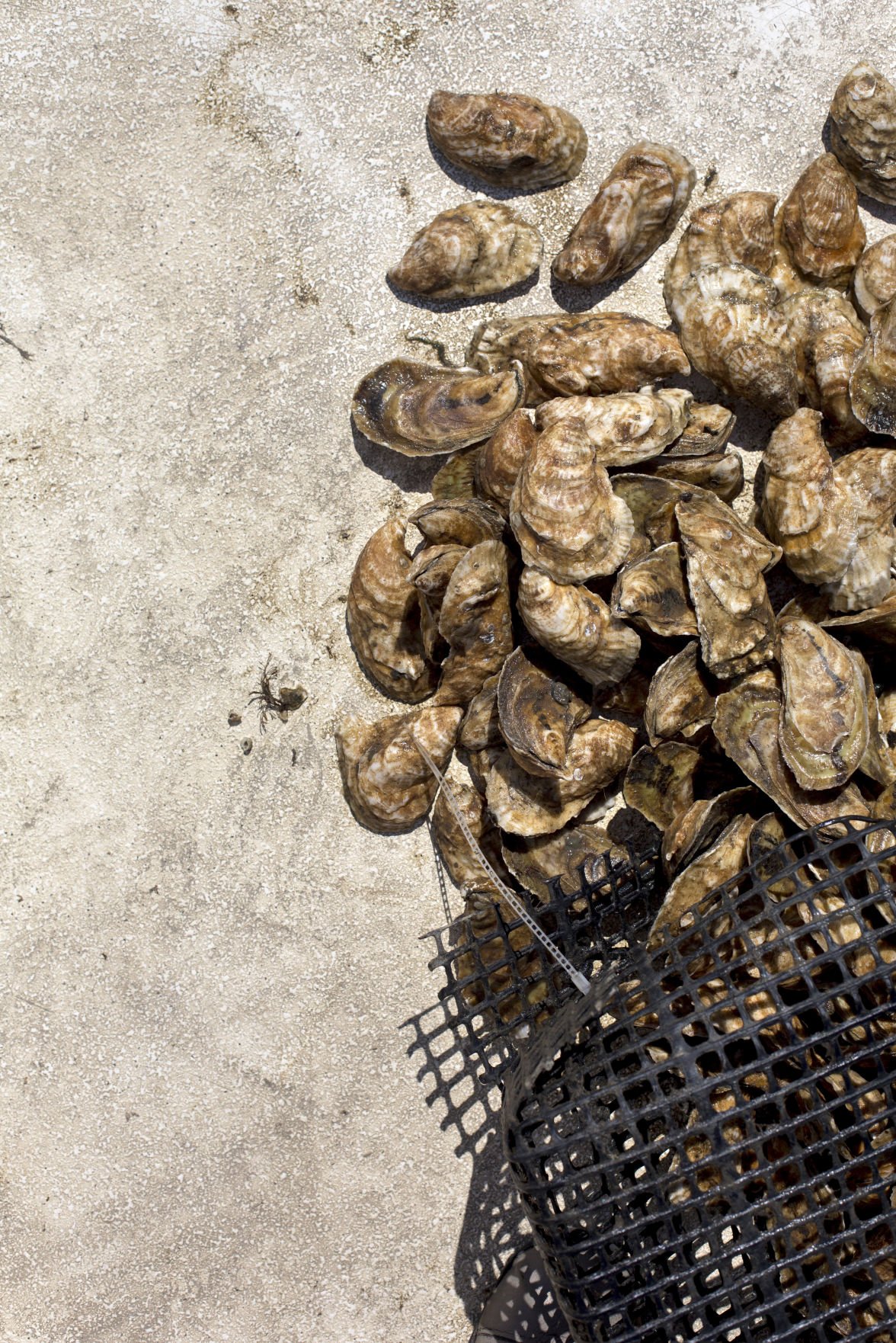 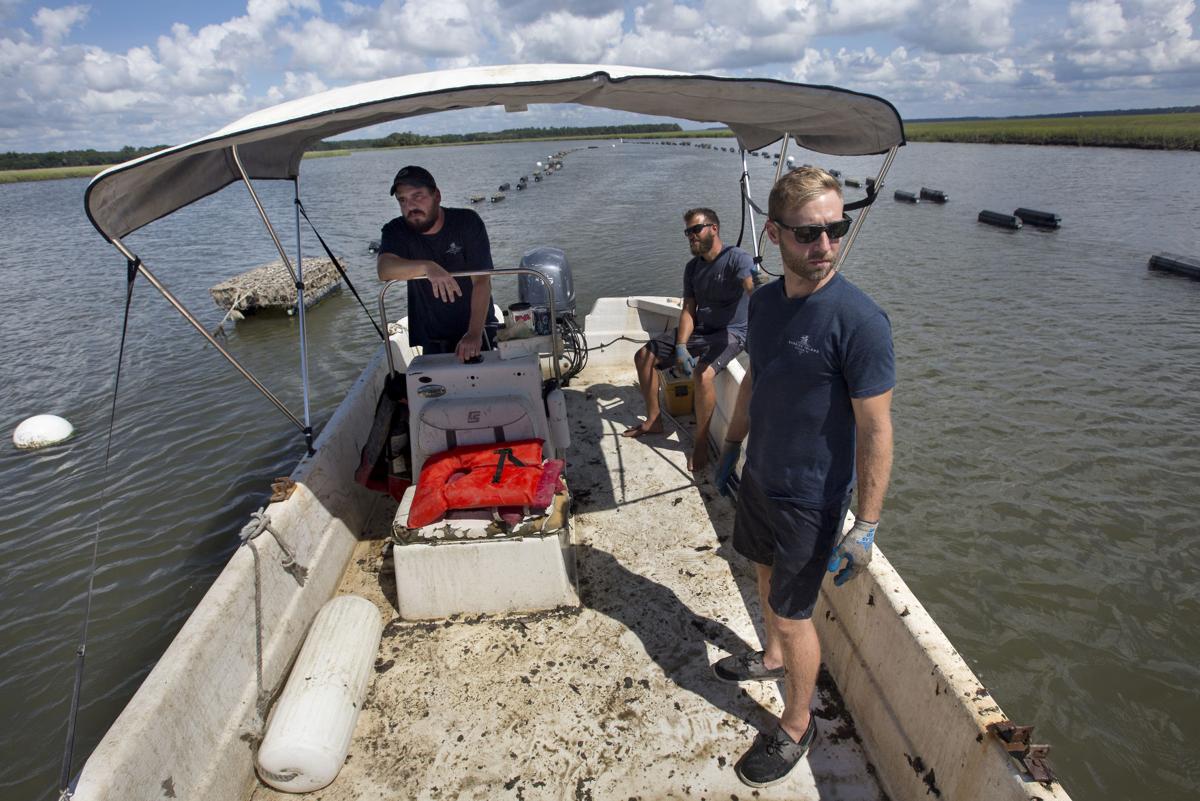 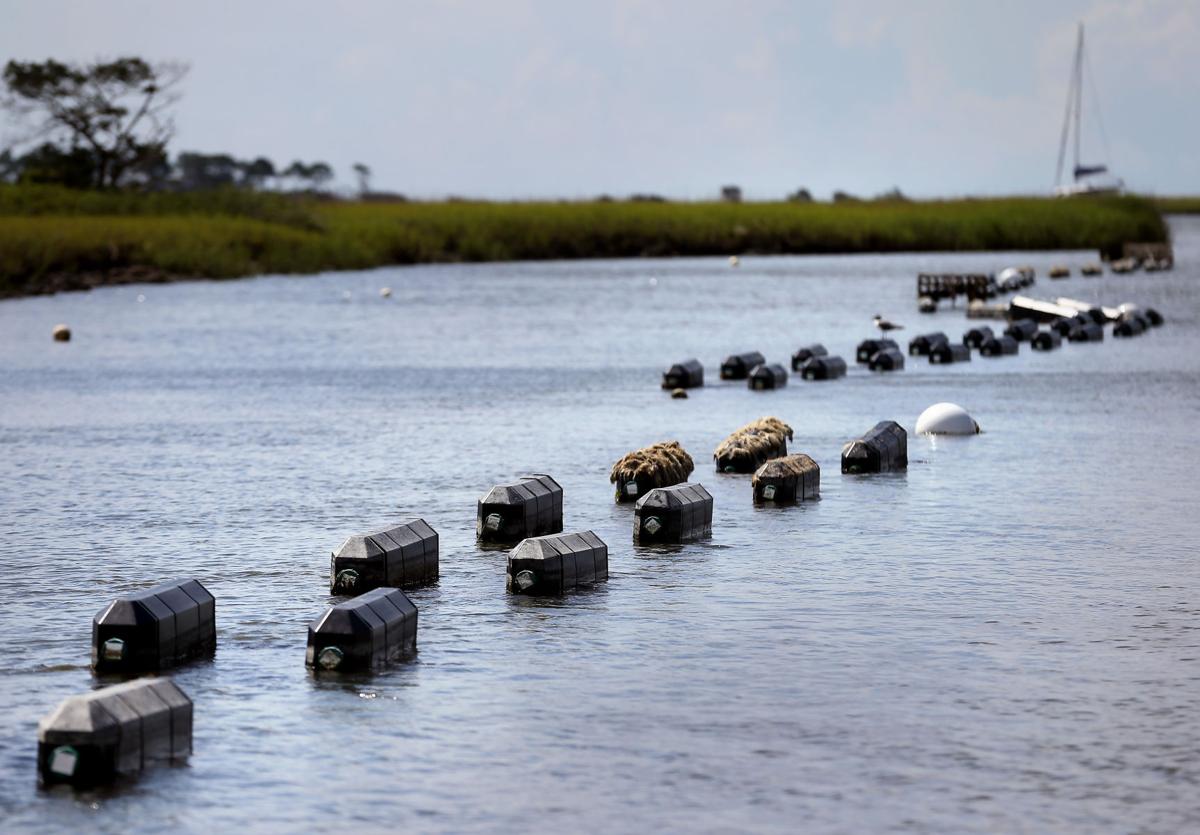 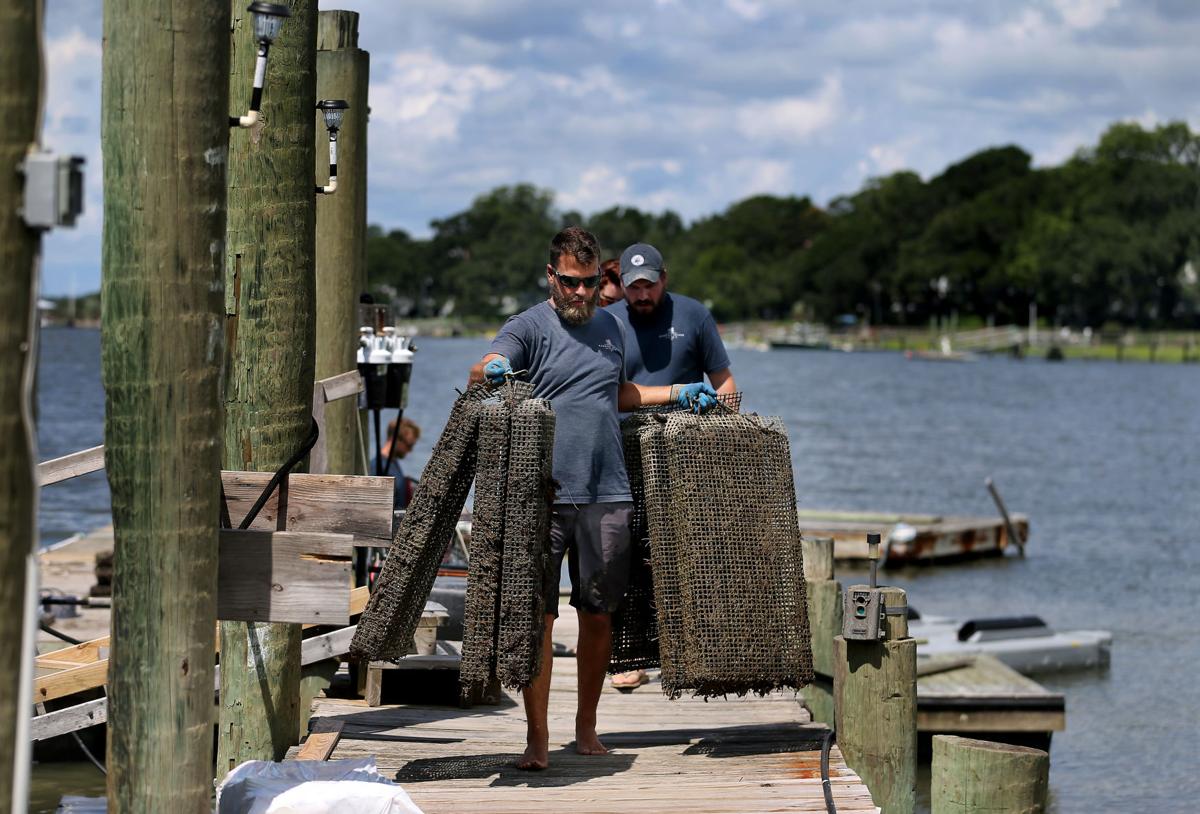 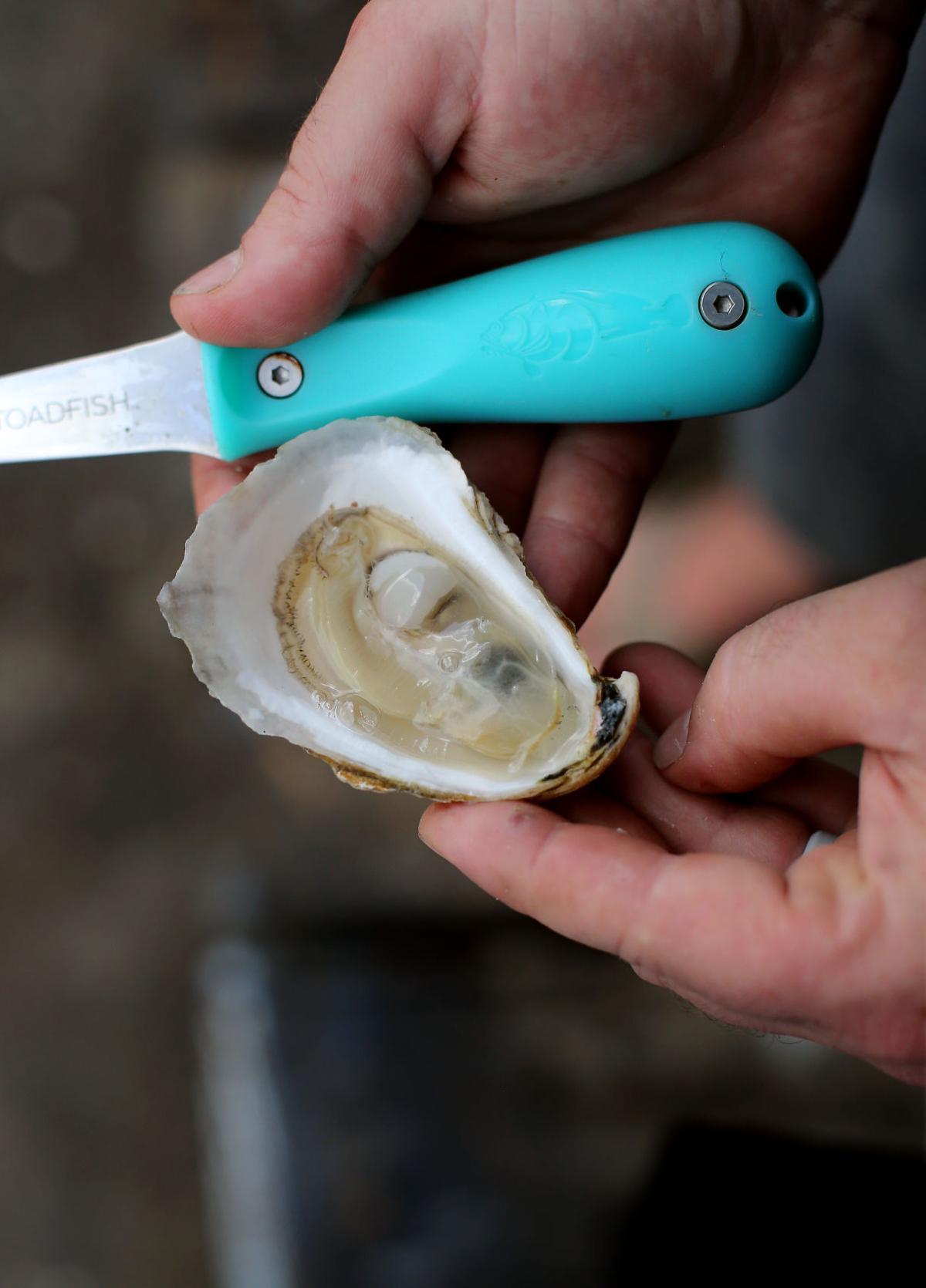 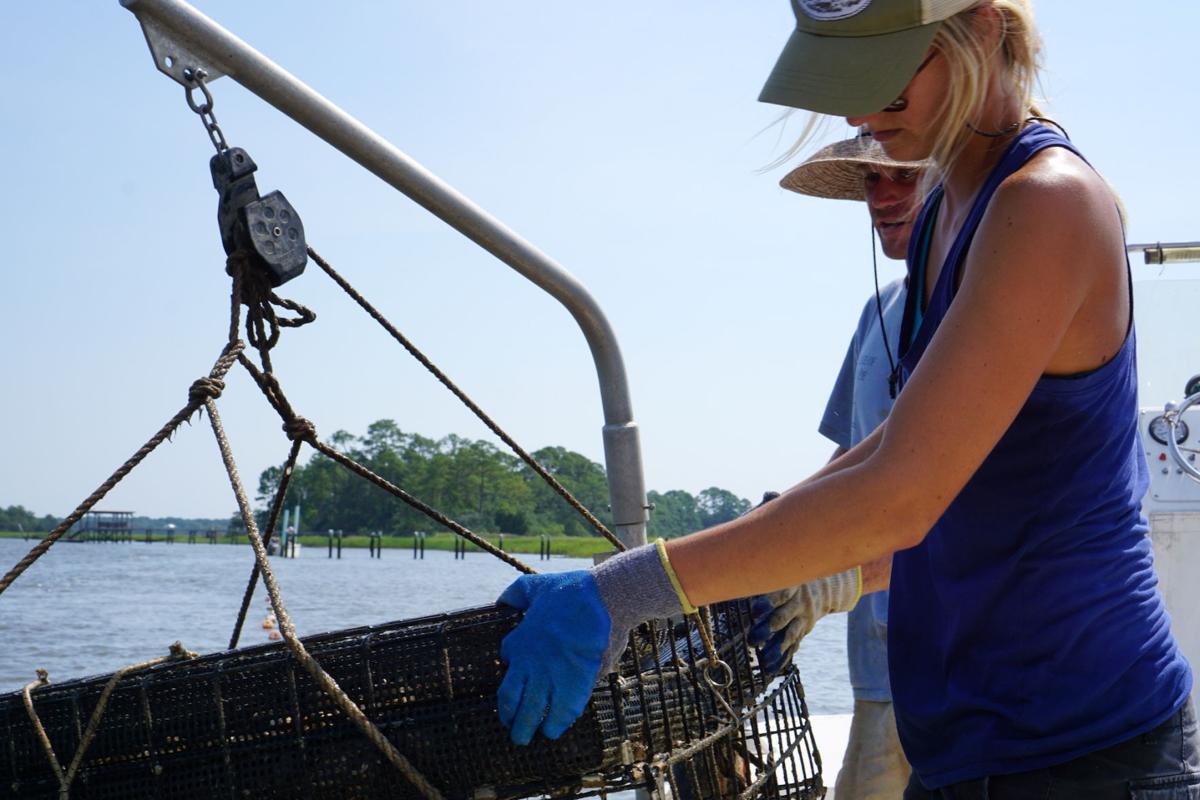 Caitlyn Mayer and Peter Bierce of Charleston Oyster Farm hoist an oyster cage from the bottom of the Stono River. Stephanie Barna/Staff 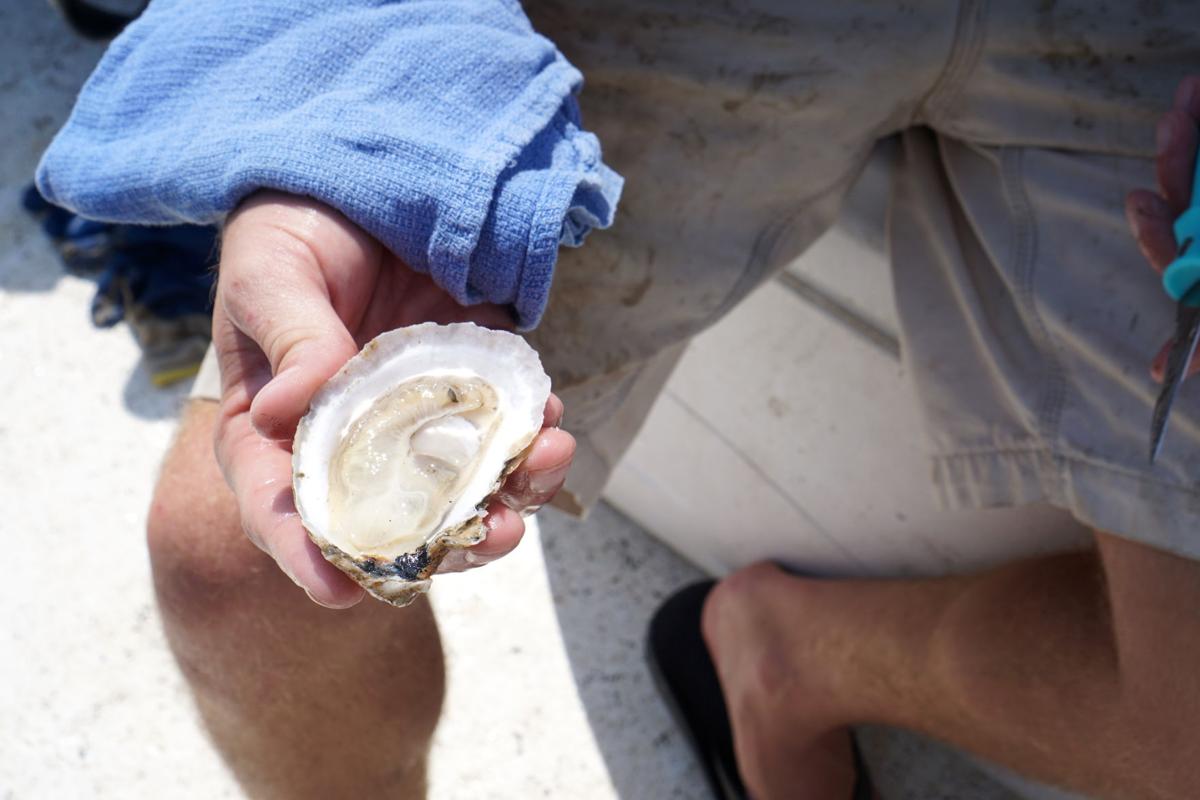 With a name like Perky Sea Cups, these oysters are sure to get some attention. Stephanie Barna/Staff 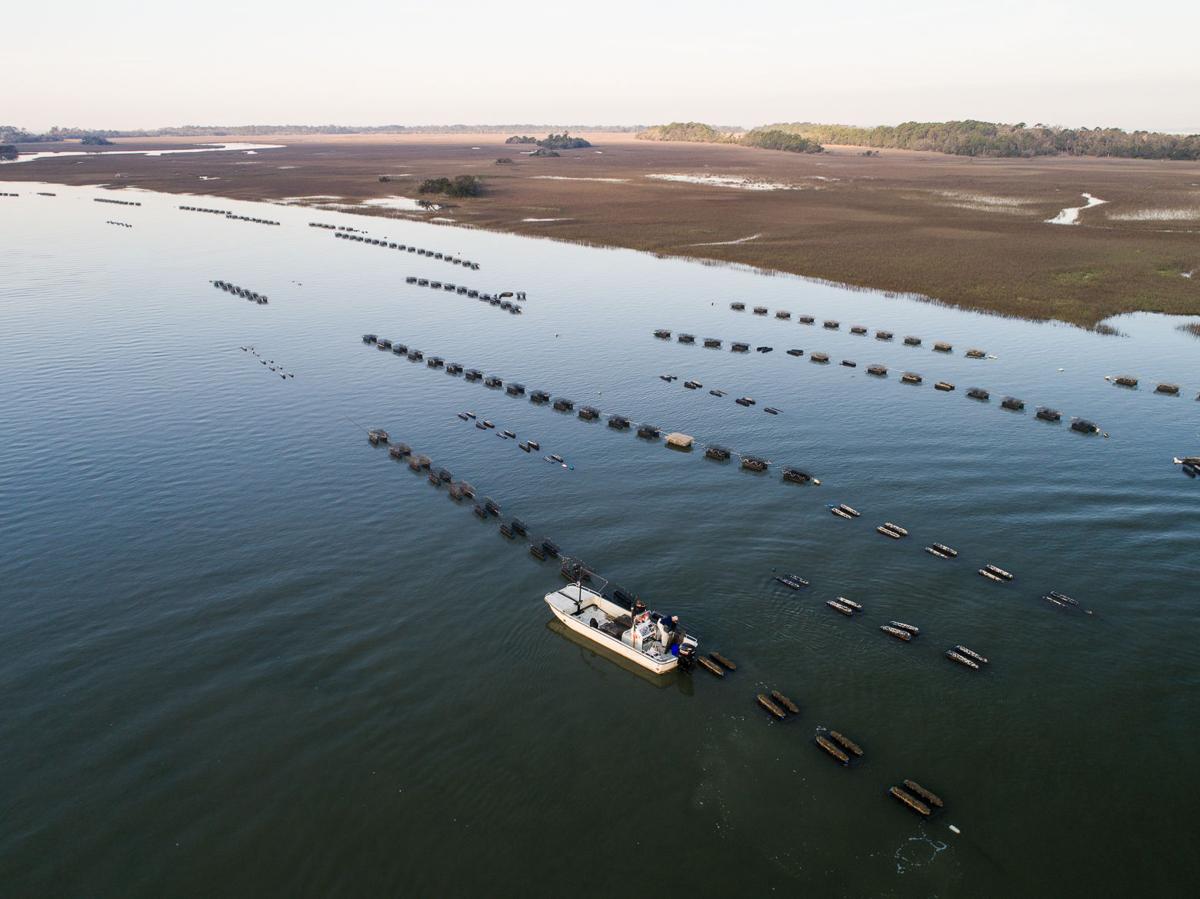 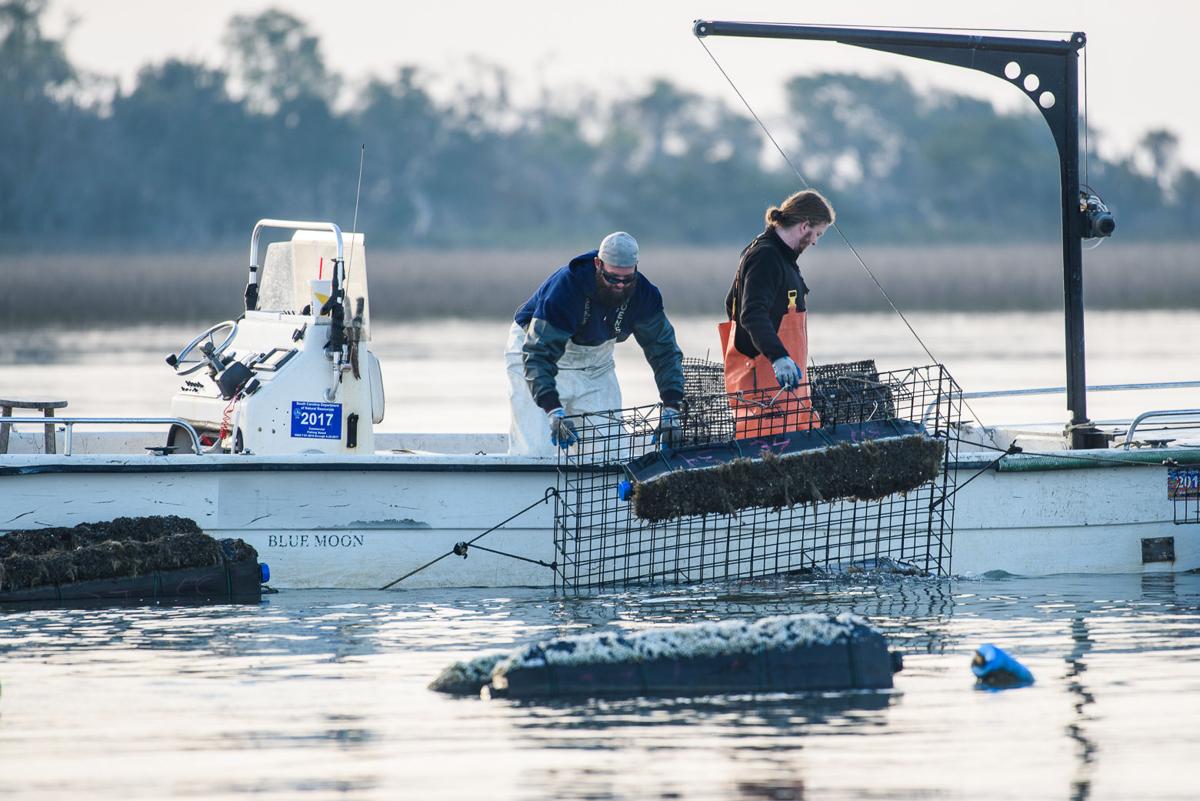 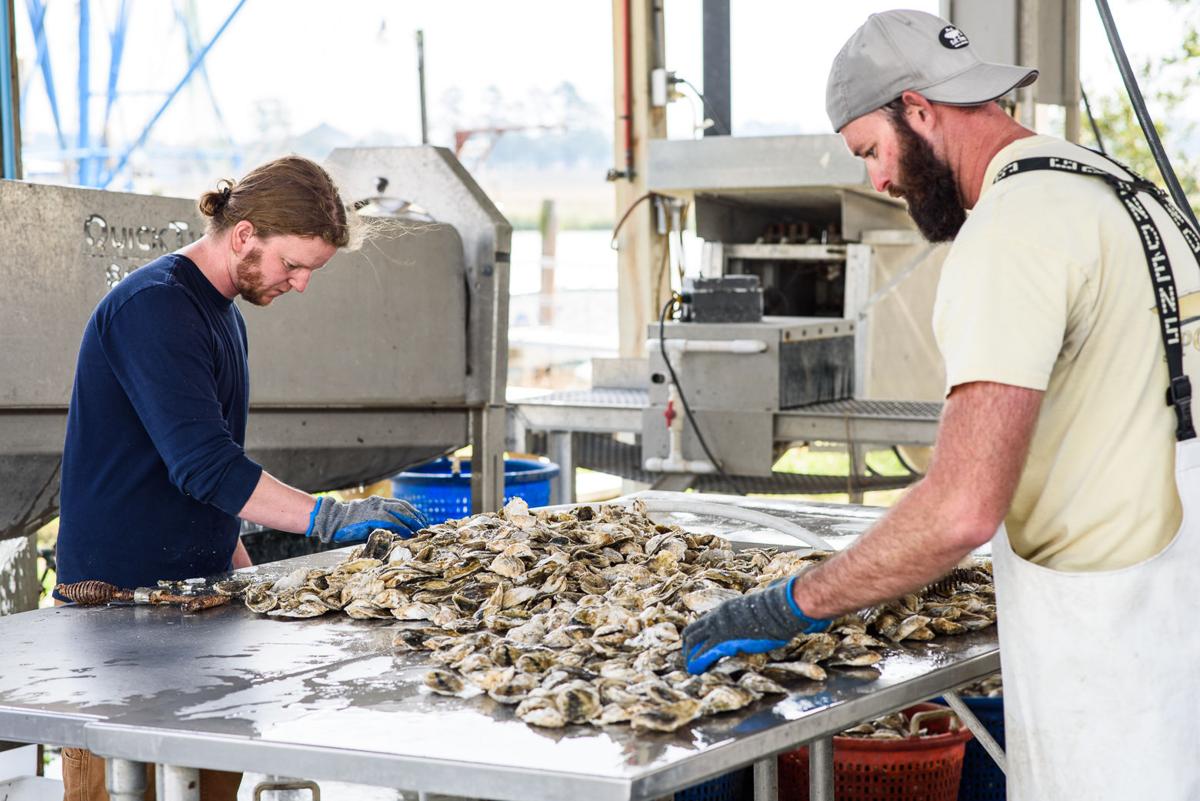 Caitlyn Mayer and Peter Bierce of Charleston Oyster Farm hoist an oyster cage from the bottom of the Stono River. Stephanie Barna/Staff

With a name like Perky Sea Cups, these oysters are sure to get some attention. Stephanie Barna/Staff

Are kids coming up with the crazy new names on the chalkboard at your favorite raw bar? At least in the eyes of oyster farmers who’ve been active in the seafood industry for a decade or more, that’s how it seems.

As Dave “Clammer Dave” Belanger says, “These kids are very optimistic. You try to cool them down a bit, but they won’t have it. And I say, ‘OK kids, you’ll see.'"

Some of the new farmers have worked for S.C. Department of Natural Resources. One is a geologist, another was a professional sport fisherman, and another worked in fine dining with some of the city's best chefs. They all have one thing in common, though, and that's the willingness to jump head first into a risky new opportunity that comes with a large learning curve, a high cost of entry and the potential to be wiped out by climate change and water acidification.

But young entrepreneurs who claim those risks are counterbalanced by regulatory changes that have transformed South Carolina oysters into a year-round crop, and the growing demand for boutique oysters.

Trey McMillan and Malcolm Jenkins of the newly-formed Lowcountry Oyster Company were so impressed by the sector’s prospects that they purchased the assets of St. Jude Farms in the ACE Basin; McMillan expects to soon plow another $750,000 into the operation so he can expand his growing area.

“The market’s there for it," he says.

The state thinks so, too. According to Department of Natural Resources fisheries management director Mel Bell, South Carolina lifted restrictions on summertime oystering because of the potential economic benefit. Mariculture is now producing only a small fraction of the number of wild oysters that the state's shellfishers harvested in the heyday of local oysters, but Bell expects the tally to increase if the new oyster farmers stick with it.

The state has thus far issued 36 mariculture permits, including 17 to farmers focused on oysters.

“It takes marketing and good quality oysters,” he says. “For a startup, it takes a little while to figure it out. This will be interesting to see how it grows.”

Contemporary Charleston’s first oyster visionary was Belanger, who came up with a method for creating singles from hard-to-sell clusters.

Drawing on what he’d learned about antebellum oyster culture, he fashioned an iron tool that was ostensibly similar to what enslaved African Americans in the Lowcountry would have used to break apart clusters. Then he placed them back in the mud to continue to grow, causing the shell to form an elongated shape that looks like a blade.

Mike Lata of FIG and The Ordinary remembers first serving Caper's Blades at FIG in 2007. “His process was so unique and wild,” he says. "Caper's Blades have a certain elegance to them. They’re delicate and super salty, which makes them extra invigorating.”

It’s that invigorating brininess that distinguishes East Coast oysters, and led Lata and Adam Nemirow to open The Ordinary in their honor. But this is the first summer that Lata has been able to serve raw South Carolina oysters at The Ordinary, and he’s pretty excited about it. “It’s the best story in food right now,” he says.

Now that South Carolina singles aren’t such a rarity, even in the hottest weeks of August, it’s up to the state’s oyster entrepreneurs to experiment with shape and flavor. As Bell says, mariculture is different from conventional dirt farming, where farmers can reference centuries of agricultural history. In the U.S., aquaculture is still in its early stages of growth.

Barrier Island Oyster Co. grows Sea Clouds in the swift waters between Edisto and Seabrook islands, not very far from the Atlantic, where the water has a high salinity.

“It tastes of the marsh and it’s supple,” says Jared Hulteen, who worked at DNR for 10 years before leaving in 2016 to pursue mariculture. “There’s a difference in taste and we wanted to be able to share that with other people.”

At Barrier Island, oysters are grown in mesh bags enclosed in floating cages that keep the oysters submerged just beneath the waterline. At different stages of growth, the farmers bring the oysters back to the dock at Cherry Point on Wadmalaw and grade them by size. They then tumble them in a custom-made tumbler, which cleans the shells and helps them develop into a deep cup shape.

The oysters are then returned to the water. “They secrete calcium carbonate to seal back up,” Hulteen says, explaining how they heal after taking a tumble.

In November, Barrier Island was harvesting about 300 oysters a week. That increased to 600 in January. This summer, they’ve been averaging 3,000-3,500 a week. About a third of those go to The Ordinary, where Lata has been won over by the quality of the Sea Clouds. “The Barrier Island guys are in it to win it,” he says.

Just south of Barrier Island's in Privateer Creek, Ryan Groeschel, who worked as the general manager at Peninsula Grill for many years, has a culture permit to harvest wild oysters. Now, he's expanding his one-man Sea Island Oyster Co. into mariculture to take advantage of the year-round harvest. He's been working his way through permitting and should have his oyster spat ready to start growing in three weeks.

Groeschel has been wild harvesting for three seasons now and already has a steady set of restaurant clients. "My goal is not to overwhelm the market," he says. "I just want to grow some quality oysters with a select handful of accounts."

Another perhaps more ambitious operation is Charleston Oyster Farm, located on an island just west of Folly Beach. Forced to respond to concerns about floating gear, considered unsightly by some, owners Caitlyn Mayer, Tom Bierce and Peter Bierce obtained a permit to use bottom cages.

Bottom cages are much more labor intensive because they have to be pulled out of the water every 14 days and air-dried for 18 hours. And because Mayer and the Bierce brothers are not allowed to use their island's private dock for commercial operations, they had to buy a beat-up pontoon boat to use as a platform for cage drying.

Mayer says it's been challenging to harvest a consistent number under the circumstances, although they’re still pulling 1,000-2,000 oysters a week. So far, chefs have been sympathetic. "They say it's kind of like the McRib," Mayer says. "You can't always get us, but they really like us when they do."