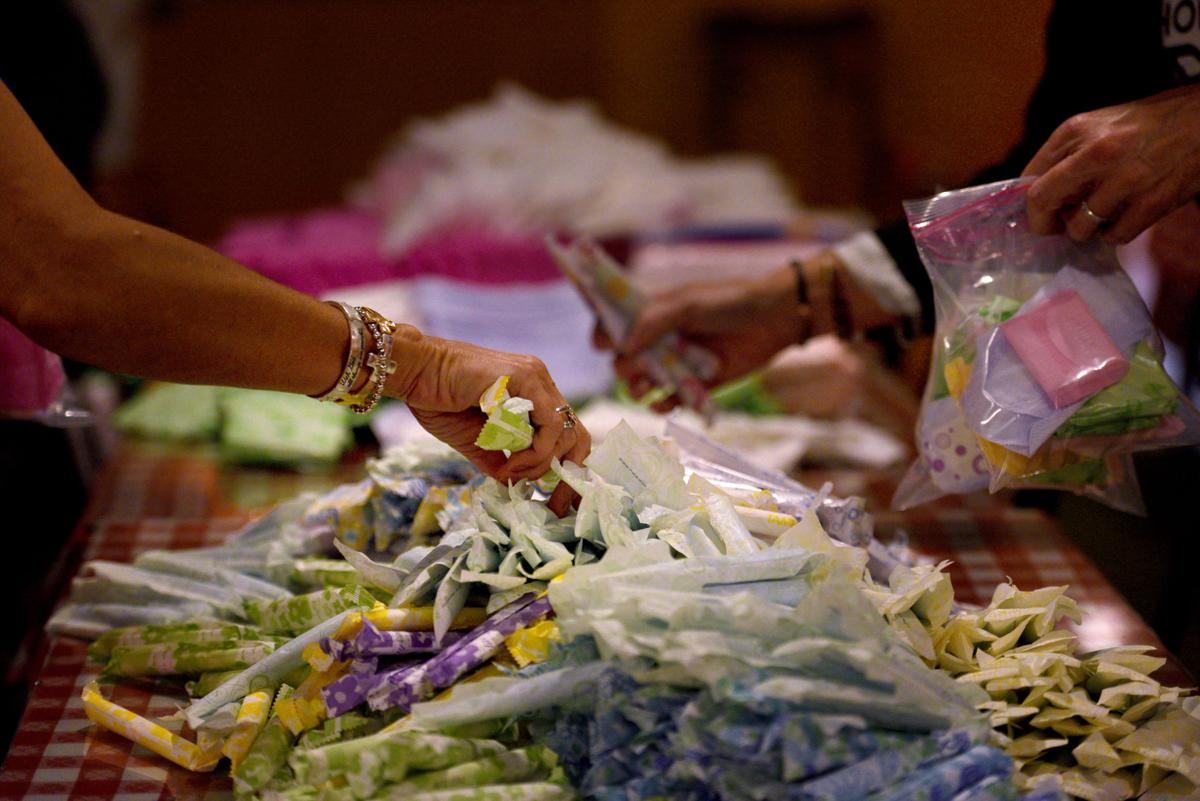 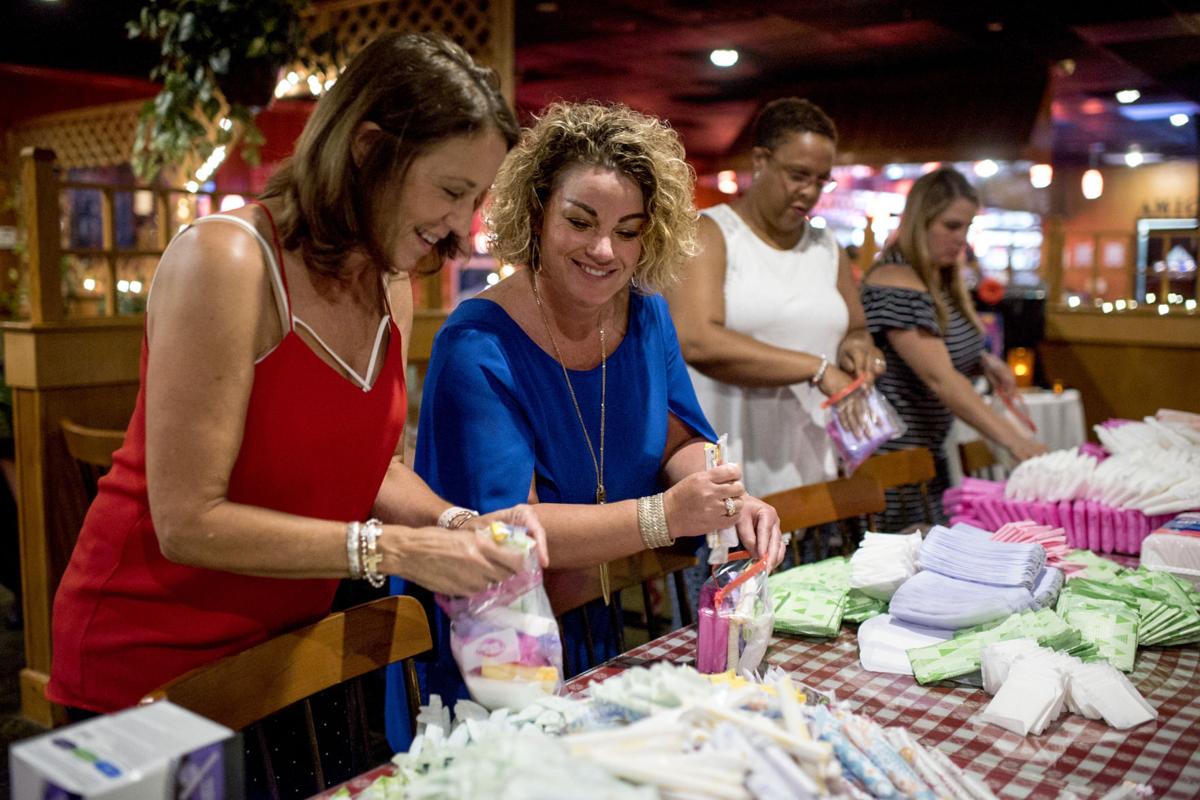 Chrys Rogge (left) and Gerrie Gordon (center) pack plastic bags of donated period supplies for The Homeless Period Project at Amici's Italian Bistro in North Charleston on Wednesday, August 16, 2017. Rogge is leader of the the Charleston chapter, which started in February. Marlena Sloss/Staff 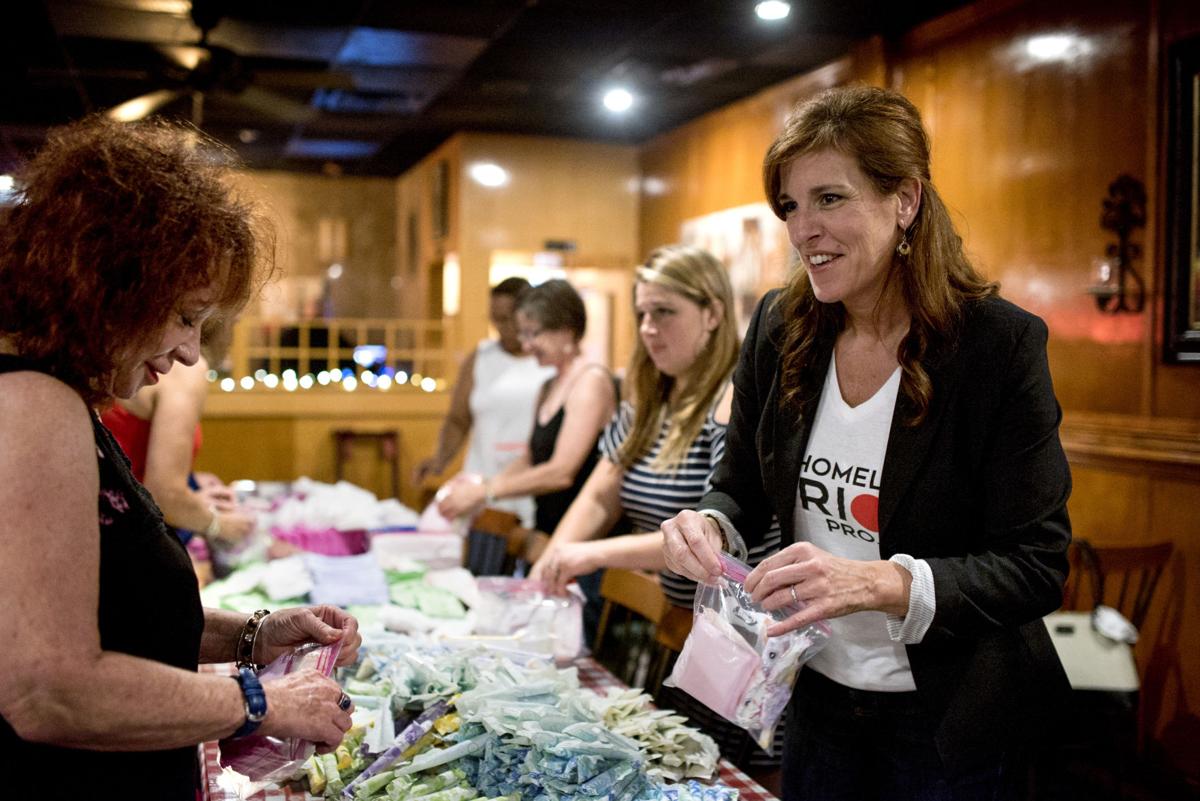 Chrys Rogge (left) and Gerrie Gordon (center) pack plastic bags of donated period supplies for The Homeless Period Project at Amici's Italian Bistro in North Charleston on Wednesday, August 16, 2017. Rogge is leader of the the Charleston chapter, which started in February. Marlena Sloss/Staff

Allison Wukovitz and the girls at the middle school where she used to work as a nurse had developed a system. If they came to her office needing a pad or tampon, they didn't have to ask. They could slide into the bathroom during the day and do what they needed to do.

And if they needed the products overnight or during the weekend, they could put what they needed in their backpacks.

Wukovitz, now an elementary school nurse who mainly treats low-income students in Charleston, said finding period supplies is just one of many adult responsibilities her girls have to take on too young. Wukovitz is sure to keep her office stocked to provide a small relief for the students.

"The goal is for them to understand that this stuff is out here for them to find," she said. "It’s available for them here."

Yet that's not the case in every South Carolina school.

Efforts have recently sprung up around the state to ensure women and girls have easy access to feminine products. Experts say the problem of availability of tampons and pads is not often thought of as being an issue in places like South Carolina. Nonetheless, homeless, incarcerated and low-income women often do struggle to buy what they need every month.

The Homeless Period Project is one such organization. It was founded about two years ago in Greenville. Sharron Philips, the organization's cofounder, said it began as an effort to ensure homeless women could access the feminine hygiene products they need. But she soon realized the problem reached beyond homelessness. She said single mothers especially may find themselves in difficult positions.

"What seems so simple for us is such a struggle for somebody else," Philips said.

A chapter of the Homeless Period Project opened in Charleston in February. Organizers have been collecting pads and tampons and distributing them to schools and other organizations in need.

Erica Roberts came to Amici's Italian Bistro last week to donate products. She found The Homeless Period Project online. She said she knew availability of feminine products was an issue in many third-world countries but wouldn't have guessed it would be a problem in South Carolina.

"To think that some women in our country have to choose between spending $7 on maxi pads or a box of spaghetti and sauce for their family, it really made me want to help," Roberts said.

Beth Sundstrom, director of the women’s health research team at the College of Charleston, said it is mainly low-income, homeless and school-age women who struggle to access what they need.

"These are the populations that experience the brunt of this burden," she said.

Not having pads and tampons is not only a hassle; it is also a health concern. Sundstrom said a lack of menstrual hygiene can also lead to infections. Many women may wait too long to swap their products in an effort to make them last. The average woman will spend about $12,000 on menstrual products in her lifetime, Sundstrom said.

A legislative effort introduced last year would have put free tampons and pads in public buildings in South Carolina. Supporters reasoned the products should be treated no different than toilet paper.

Members of the South Carolina Women’s House Caucus also discussed, but never introduced, legislation that would remove a retail luxury tax on feminine products. The issue has garnered national attention.

While solutions to improve accessibility have stalled in the Legislature, Stacey Denaux, CEO of One80 Place, said homeless women in Charleston can find what they need at the shelter without a problem. Women staying at the shelter can pick up supplies from a stocked cabinet.

"We try to make everything readily available so it’s not a burden," Denaux said. "If you’re here, we’re meeting all those needs."

She said while the availability of feminine products is an ongoing issue for homeless women, it is more often low-income women in Charleston who struggle to access what they and their daughters need.

Vicki Ringer, director of public affairs for Planned Parenthood in South Carolina, said the Planned Parenthood clinics in Charleston and Columbia will soon begin stocking tampons and pads. Ringer said the group is beginning its own drive in the coming weeks to ensure pads and tampons are available in schools.

Ringer said she has heard stories of girls using socks, washcloths and napkins to make do. She said women and girls should never have to miss school or work or suffer embarrassment and infection simply because they don't have feminine products.

"There just shouldn’t be barriers for girls to have what they need," she said.