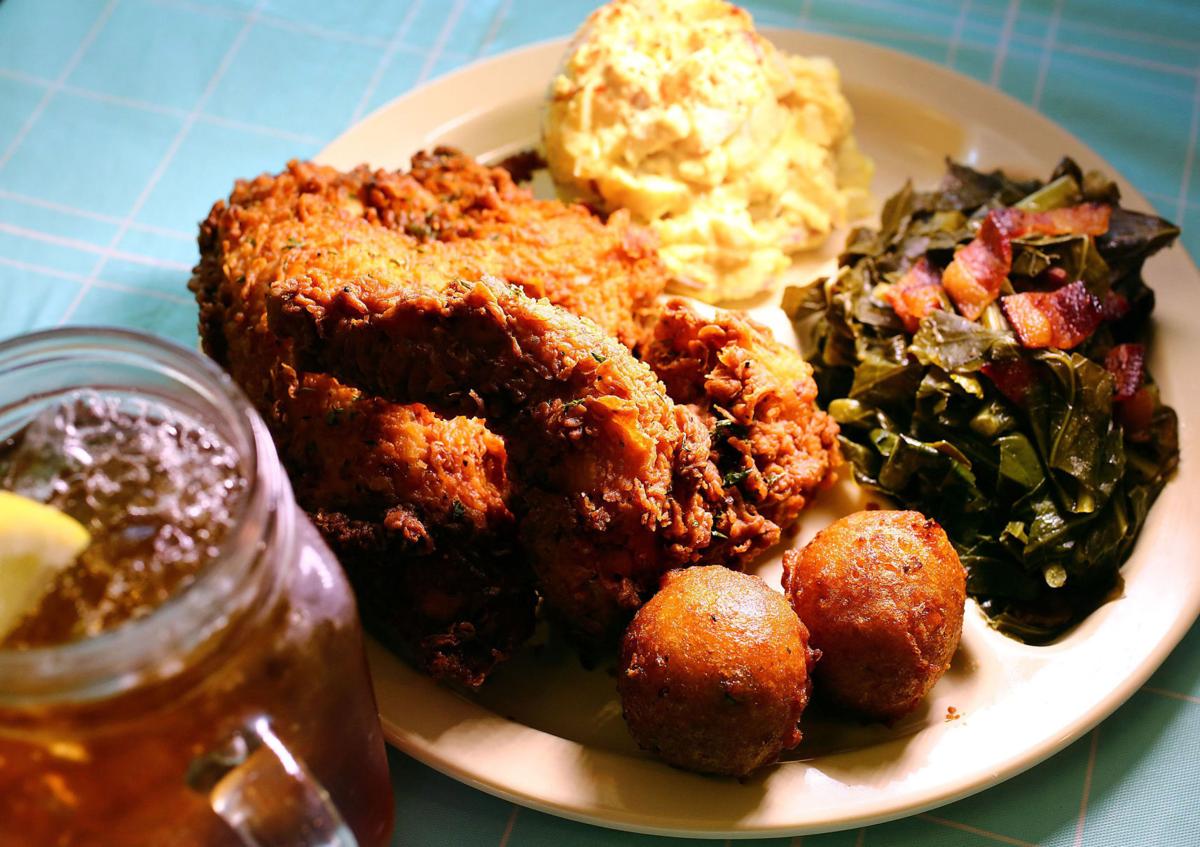 USC researchers are exploring how to align traditional Southern cuisine, such as the fried chicken, potato salad, collard greens and hush puppies pictured, with a healthy diet. File/Wade Spees/Staff 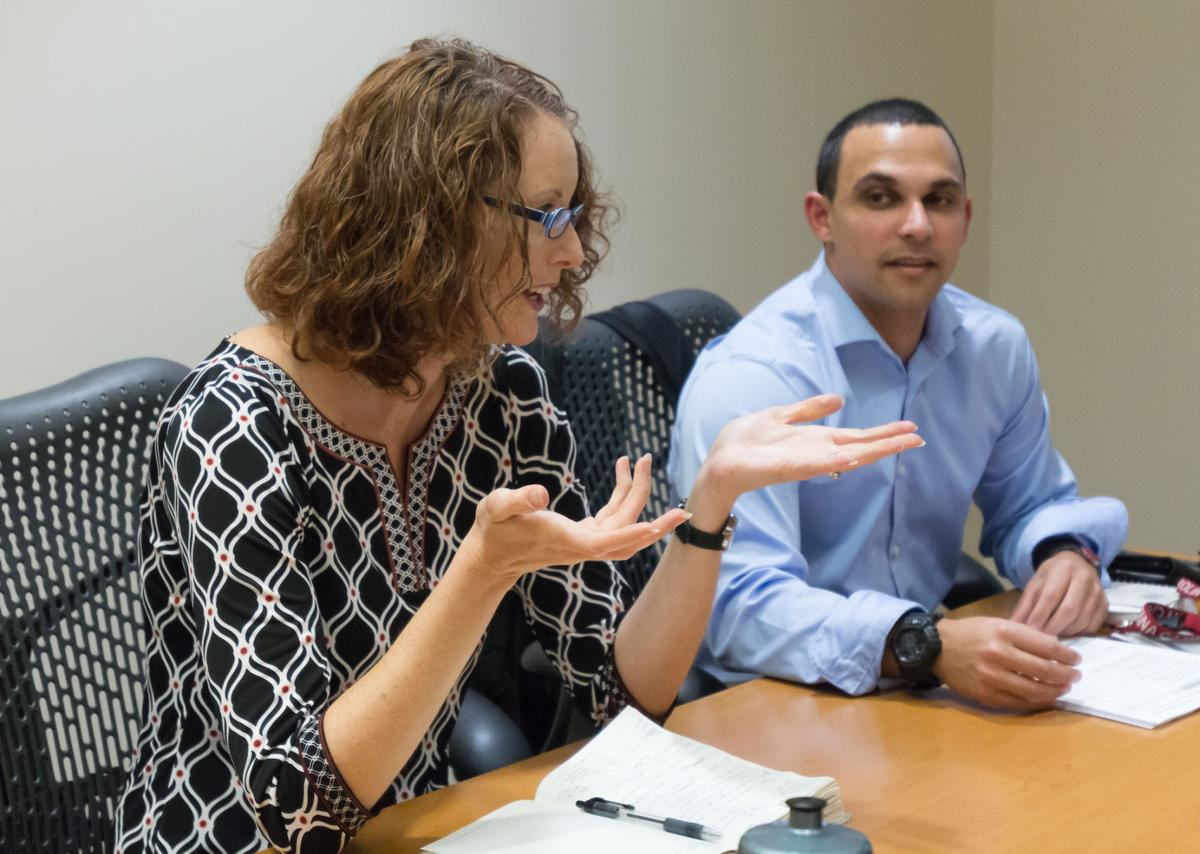 Brie Turner-McGrievy discusses her research on healthy soul food at the University of South Carolina. Provided/USC 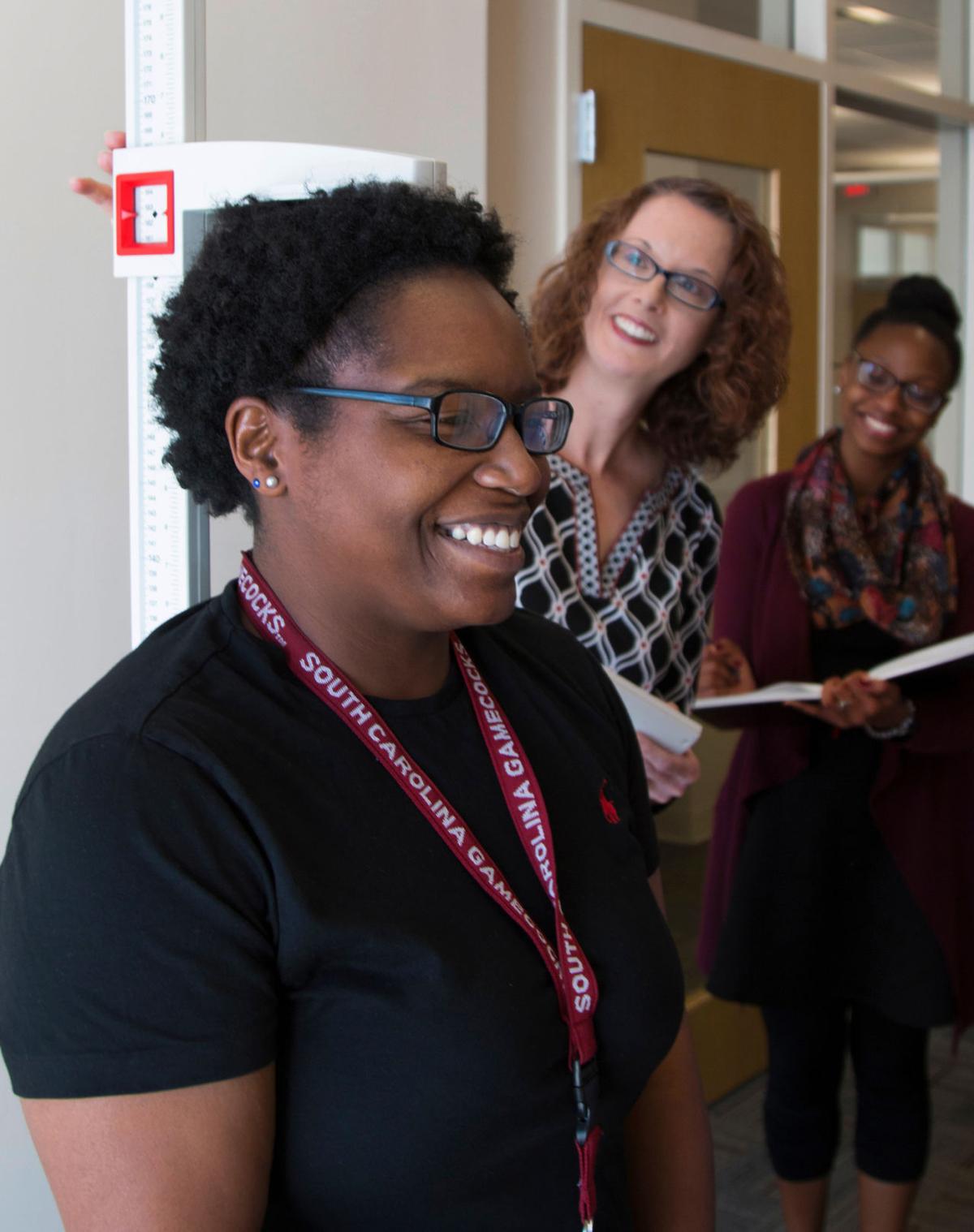 Brie Turner-McGrievy, an associate professor, measures Camelia Singletary, a former student, as part of research on healthy soul food at the University of South Carolina. Provided/USC

USC researchers are exploring how to align traditional Southern cuisine, such as the fried chicken, potato salad, collard greens and hush puppies pictured, with a healthy diet. File/Wade Spees/Staff

Brie Turner-McGrievy discusses her research on healthy soul food at the University of South Carolina. Provided/USC

Brie Turner-McGrievy, an associate professor, measures Camelia Singletary, a former student, as part of research on healthy soul food at the University of South Carolina. Provided/USC

Adrian Miller, an author and an expert on soul food, said he went to 150 soul food restaurants in 35 states for research for his book. And he said the hottest trend in soul food is vegan, or plant-based, recipes.

He told Epicurious, a food magazine, that he heard some backlash to the idea of vegan soul food.

"It’s not an oxymoron," he said. "It’s actually a homecoming."

That's an idea University of South Carolina researchers would like to explore.

A two-year study is currently recruiting only African-American subjects for research on the nutrition of soul food. Called Nutritious Eating with Soul, it is designed to prevent heart disease and maintain a healthy weight for people who eat soul food.

The research seems to attempt to tackle the issue of how to align the South’s most beloved traditional cuisine with a healthy diet.

The Robert Wood Johnson Foundation names South Carolina the 12th worst state for its obesity rate. Worse, the state ranks sixth for diabetes and eighth for hypertension. African-American adults fared worse than any group in the state, with nearly 42 percent of their population obese in 2016.

Brie Turner-McGrievy, lead researcher on the project at USC, said the idea is to refocus recipes from animals to plants. They also will encourage participants to move away from salt in favor of healthier and mineral-rich spices such as allspice, cardamom and garlic.

She said participants will be encouraged to bring in their own recipes for discussion about simple ways to make the dishes healthier.

Anyone who participates must be willing to try either diet. Subjects will attend classes, be assigned a nutritionist and be compensated financially.

Anthony Crimarco, a doctoral student on the research, said when soul food originated in Africa, they relied mostly on plants for their diet. When the Atlantic slave trade began, Crimarco said, slaves had to adapt to their environment.

"They had to learn new cooking methods," he said. "They had to get creative with the little resources that they had."

He said the soul food of today sprang from Sunday church gatherings held after slavery was abolished. But Crimarco said he has found African-Americans continued to eat mostly plant-based foods during the week.

It is the modern food environment — fast foods and processed foods — that has made some soul food less healthy and moved it further from its plant-based roots, he said.

Debbie Petitpain, a dietitian with Sodexo and the Medical University of South Carolina, said African-Americans could stand to benefit even more than their white counterparts if they try a vegetable-based diet.

Though researchers don't quite know why, in past studies African-American subjects have made greater improvements than other demographic groups when they try eating mostly fruits, vegetables and grains, she said.

Petitpain led a class in 2015 called Taste of African Heritage. In the same vein as USC's research, Petitpain tried to show ways to make soul food healthy. One suggestion she gave: Stir-fry collard greens instead of cooking them for a long time. The greens will retain their nutritional value that way. Or, the cook could keep the water the collard greens were cooked in and use it for rice.

She said she was pleased to find many people stuck with the classes and continued to come back.

Still, Petitpain said it can be hard to tackle foods that may be contributing to poor health because of a strong cultural identification.

The new study at USC stands apart even solely in its recruitment tactics. Turner-McGrievy said most nutrition studies attract a predominately white population. The group is targeting its outreach to try to reach the African-American population.

A number of restaurants attempting a vegan or vegetarian take on soul food have sprung up in South Carolina. The USC researchers are consulting with a handful in the Midlands for advice on recipes and authenticity. Turner-McGrievy said the goal is to make the food both culturally appropriate and tasty.

Folami Geter bought Lamb's Bread Vegan Cafe from her father, she said. She was raised vegetarian. Geter said both her parents are southerners, and both cook.

"People are coming to the realization that vegan food is actually the real 'soul food,'" Geter said. "It nourishes your body and mind. It doesn't fester in your digestive system."

Crimarco said the researchers expect to run into some reluctance. But he said his hope is to try to demonstrate the ways a traditional African diet is mostly plant-based.

"We’re hoping it resonates with them in some way, so they feel a better connection when they try to change their diet," he said.

Go to newsoul.org for more information about the Nutritious Eating With Soul research. Researchers will need prospective study subjects to take a survey.

They are looking for African-American adults younger than 65 who are overweight or obese and live in the Columbia or Midlands area. The study will be a weekly commitment. Everyone will be given access to a nutritionist and will be compensated.