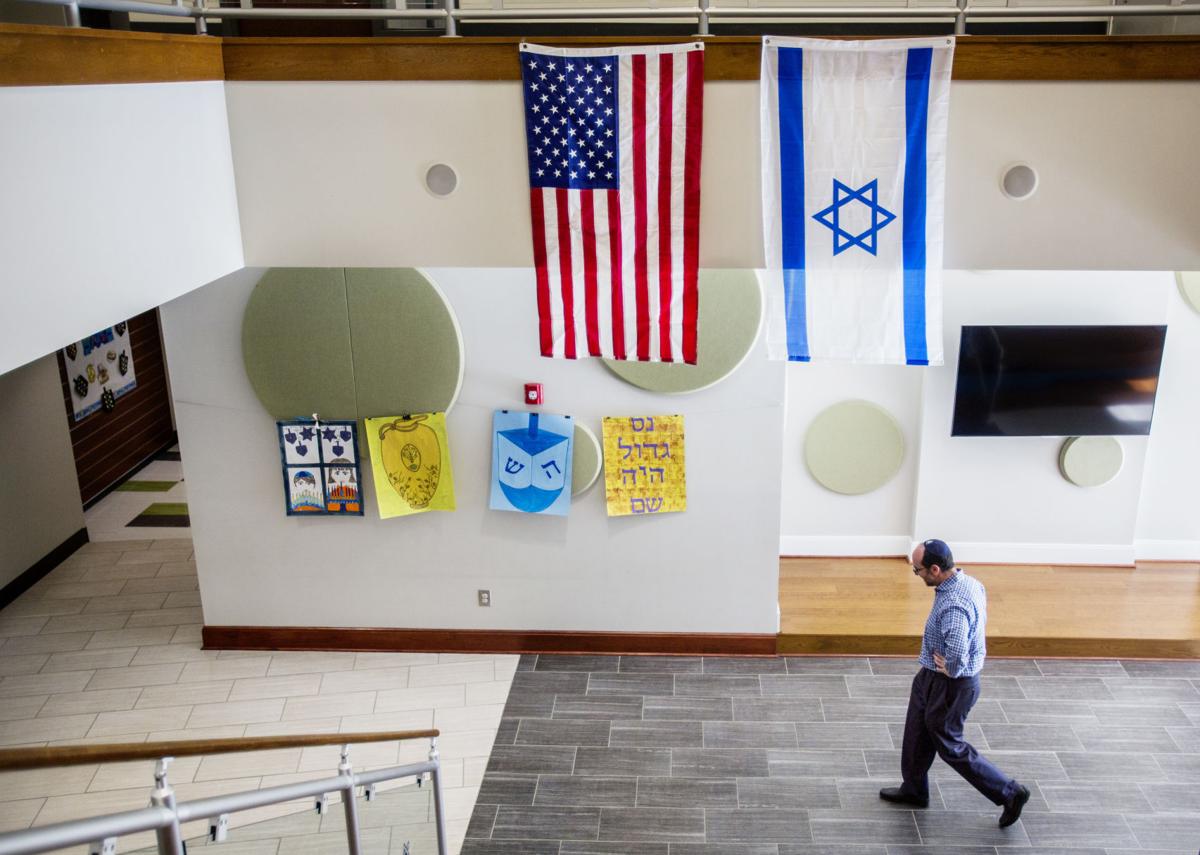 Rabbi Elisha Paul walks through the first-floor lobby while heading to his office at Addlestone Hebrew Academy on Tuesday Dec. 10, 2019, in Charleston. Gavin McIntyre/Staff

Ethan Shapiro asks students whether they know "ethos, pathos and logos" before distributing a handout during English class at Addlestone Hebrew Academy on Tuesday, Dec. 10, 2019, in Charleston. Gavin McIntyre/Staff 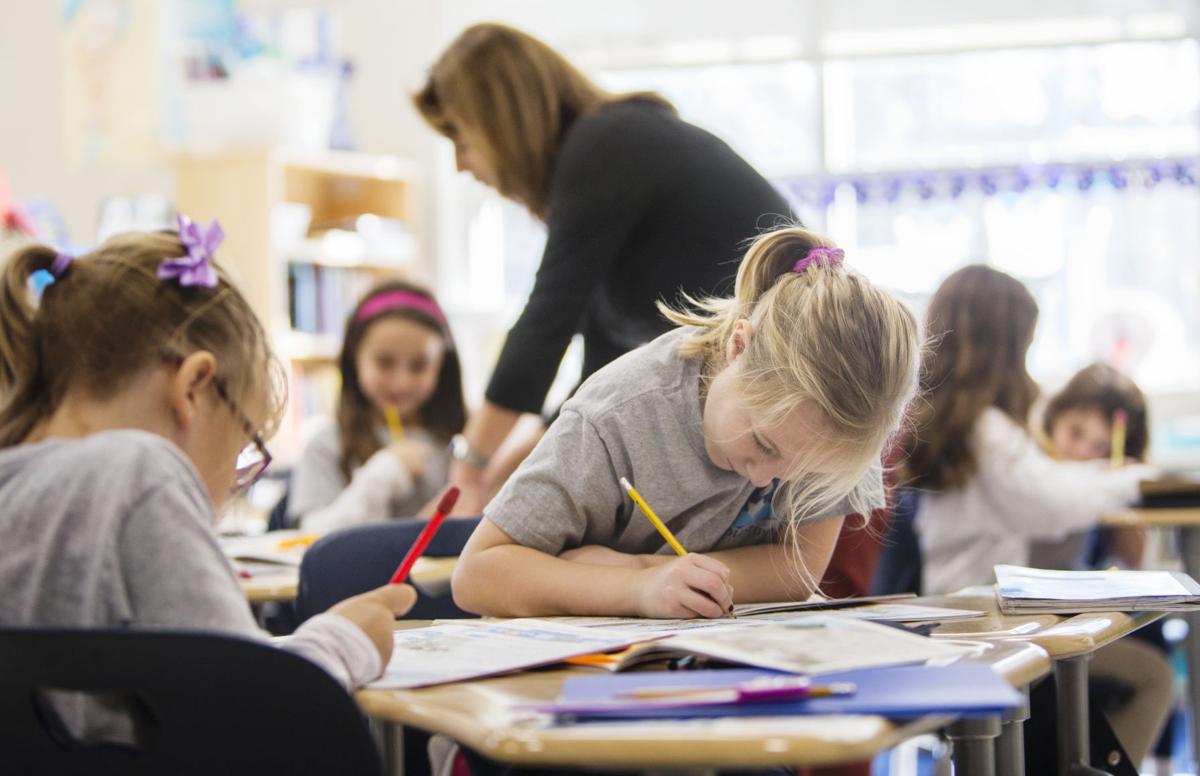 Adi Katan (right) works on a story about Hanukkah during a Hebrew class at Addlestone Hebrew Academy on Tuesday Dec. 10, 2019, in Charleston. Gavin McIntyre/Staff 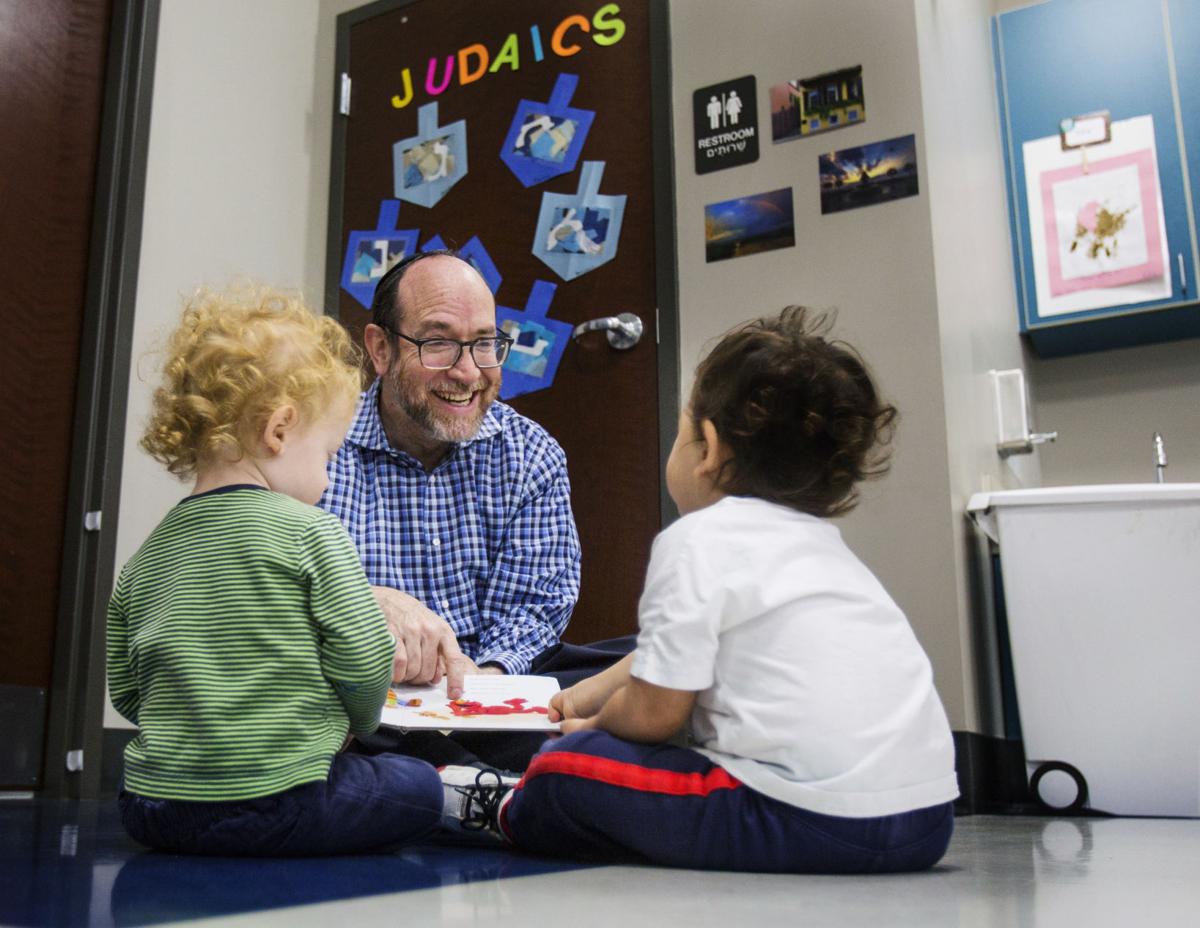 Rabbi Elisha Paul walks through the first-floor lobby while heading to his office at Addlestone Hebrew Academy on Tuesday Dec. 10, 2019, in Charleston. Gavin McIntyre/Staff

Adi Katan (right) works on a story about Hanukkah during a Hebrew class at Addlestone Hebrew Academy on Tuesday Dec. 10, 2019, in Charleston. Gavin McIntyre/Staff

Behind three secured doors hangs both an American and Israeli flag inside Charleston's only Jewish day school.

Head of School Rabbi Elisha Paul explained that the flags, which he said display the school's pride in American citizenship and Hebrew heritage, were taken from outside the building years ago as a safety precaution.

"We don't want to be provoking someone who's looking for a target," Paul said.

In an age marked both by acts of violence against minority faith groups and mass shootings in schools, the new head of school is striving to make Addlestone Hebrew Academy more community-focused while also maintaining a safe environment where children receive a high-quality education and gain a deep appreciation for Jewish culture.

Since Paul joined the school this summer, Addlestone — one of three Jewish day schools in the state — has increased its visibility through social media and community events, such as an educational-based Hanukkah Fair that welcomed 200 guests for games, activities and food.

The school will host a forum on gun violence in the spring when it will also acknowledge the fifth anniversary of the Emanuel AME Church shooting.

Paul has attempted to build relationships with the community by visiting local day schools and joining a local organization for heads of schools.

The outreach efforts could help increase attendance, which is something Jewish day schools have prioritized in the past.

Attendance at the school has climbed in the past five years to 115 students enrolled.

But even as the school grows, Paul still wants Addlestone to maintain a good student-to-teacher ratio.

Currently, classes can be as small of five students and Addlestone's tight-knit feel is appealing to parents.

But as the school has aimed to maintain that community feel, it acknowledges the painful reality that the threat of violence still lurks.

To that end, the school spent money to hire a front-desk attendant who is also a former Army commander. Charleston city police officers regularly stop by as part of routine patrols.

The facility, built five years ago, was constructed with modern safety measures and all classroom doors are locked during classes.

"You want to be more open to the community around us, while still being known as the safest place to go to school," Paul said. "That's a balance."

Private Jewish day schools are unique in that they offer academic programs and classes on Jewish history and the Hebrew language. At Addlestone, where children 18 months through eighth grade begin their days with prayer and eat Kosher-based foods for lunch, five youths in second grade read on Tuesday the story of Hanukkah in Hebrew.

The Jewish festival, which will be celebrated Dec. 22-30 this year, commemorates the rededication of the Second Temple in Jerusalem.

Keren Ayalon, who teaches middle school Hebrew at the school, has two children who are enrolled. She and her husband are Jewish, and it was important to them that their children learn to read and write Hebrew.

This year is also the first time her oldest son, who is in fourth grade, attended a Jewish day school. Last year, he was the only Jewish child in his class.

"It's nice to know there are places where there are other kids like him," Ayalon said.

Not all of the students have Hebrew heritage, though. Some parents who aren't religious at all chose the institution because of its academic programming, which ensures that students learn a foreign language before they leave middle school.

Jessica Bellger, who works in the school's office, isn't religious but enrolled her 2-year-old daughter in Addlestone's preschool. Bellger said she looks forward to her daughter becoming bilingual as she goes through the program.

Paul joined the program after having led five other day schools across the country. The son of Jewish parents — his mother was a Holocaust survivor — he developed an early appreciation of his faith and education.

He experienced a crossroads as a young rabbi when deciding whether to focus his ministry on youths or adults. He ultimately chose students, whom he noted have their entire lives ahead of them.