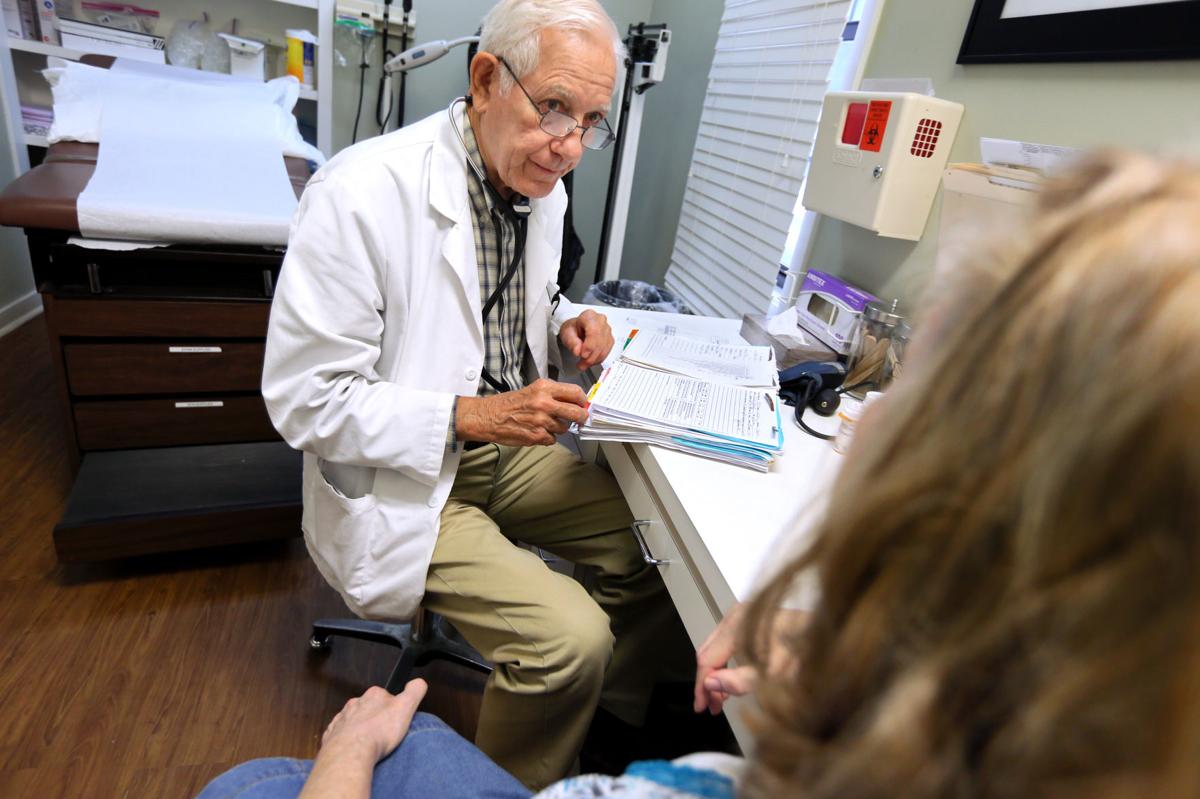 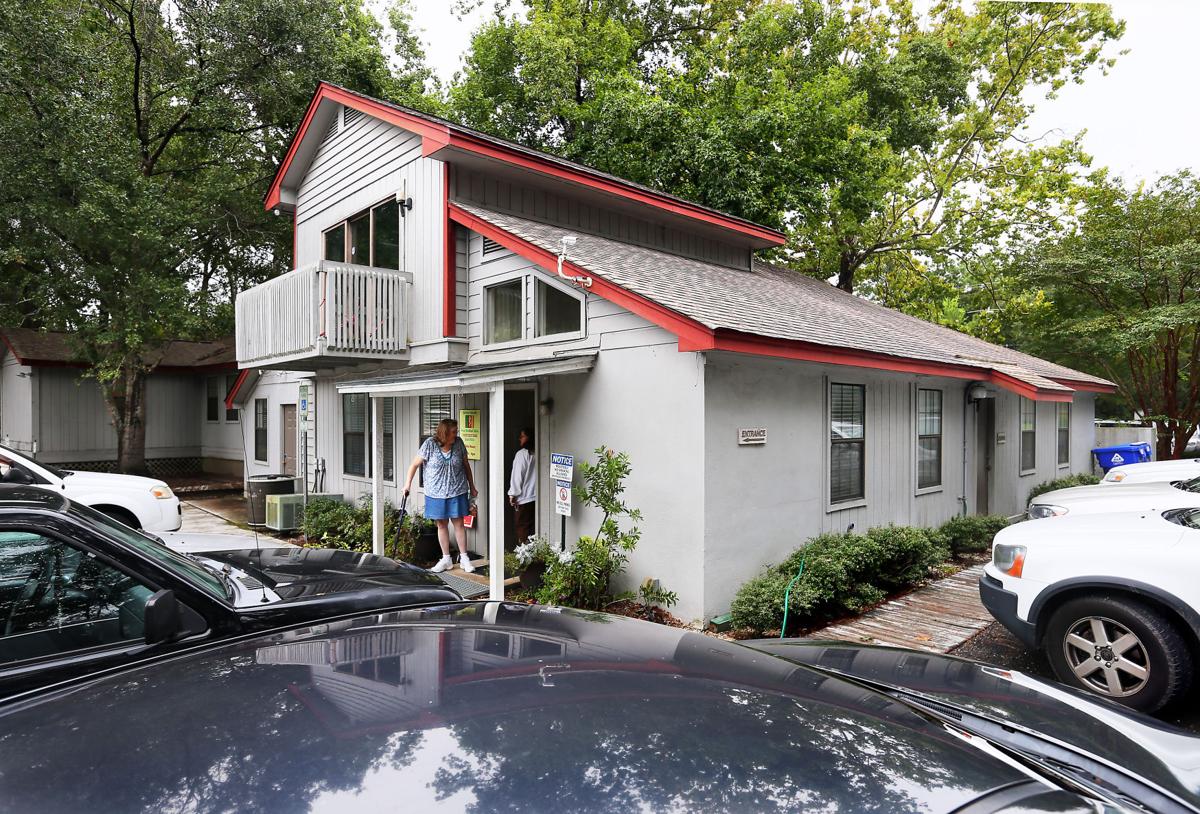 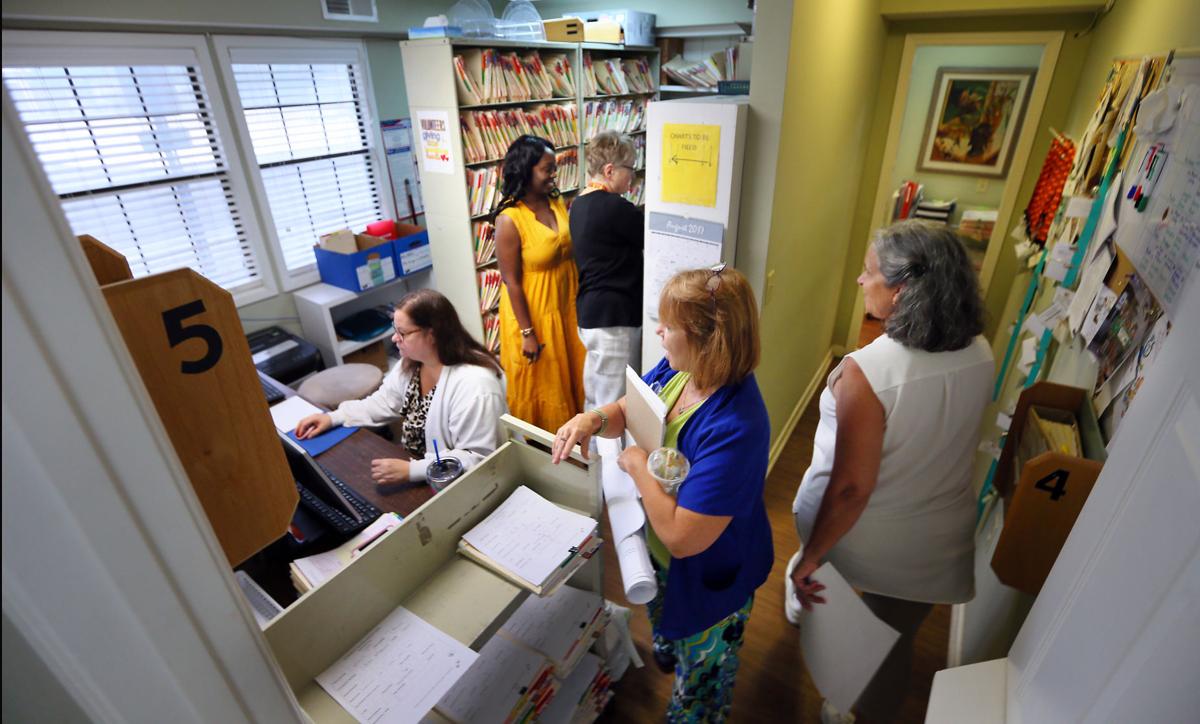 The front office is "a little hub" of activity with a mix of volunteers and staffers, including Mary Bull (from left), Mecca Hayes, Linda Paddock, Wanda Lefler and Sue Garcia, at the Barrier Islands Free Medical Clinic on Johns Island on Tuesday, August 29, 2017. Wade Spees/Staff 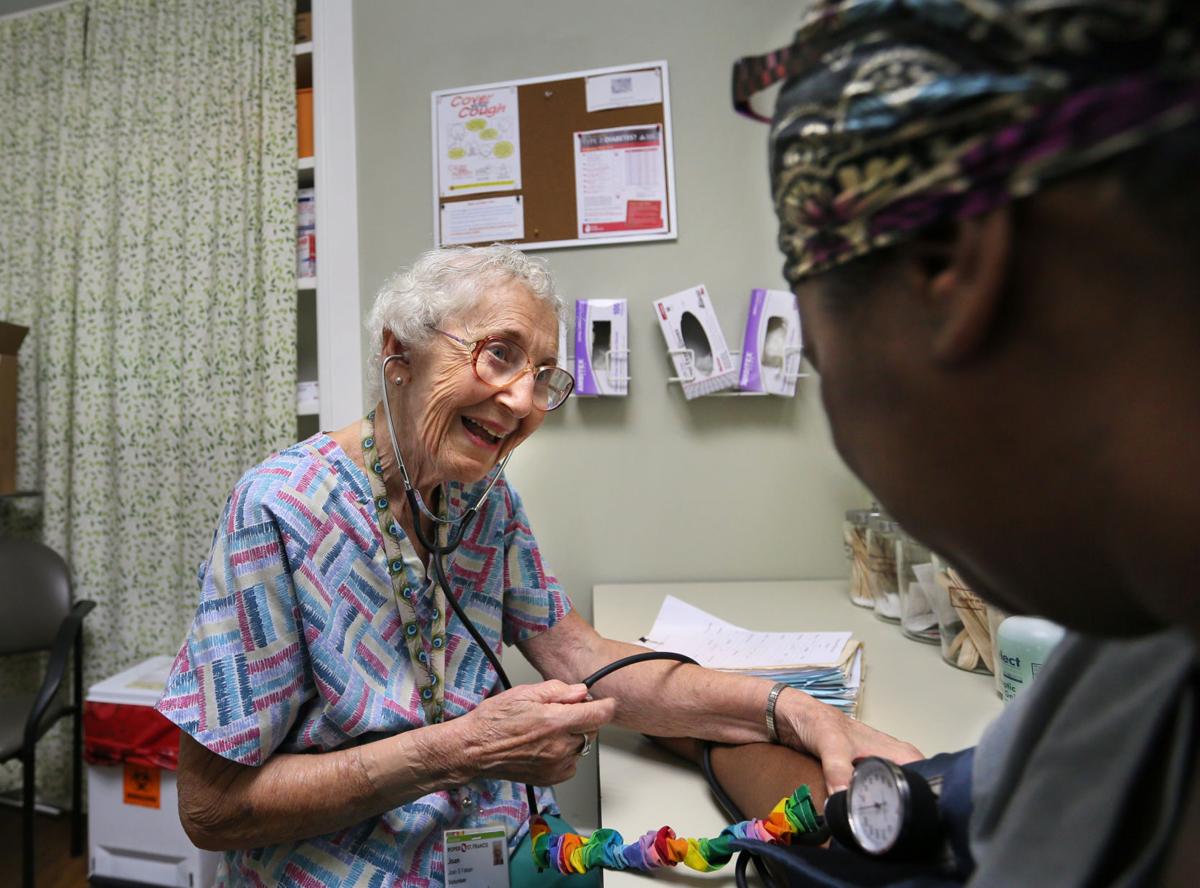 Even after six decades as a registered nurse, Joan Fabian appears to relish the interactions with patients, including Lien Miller, at the Barrier Islands Free Medical Clinic on Johns Island on Tuesday, August 29, 2017. Wade Spees/Staff 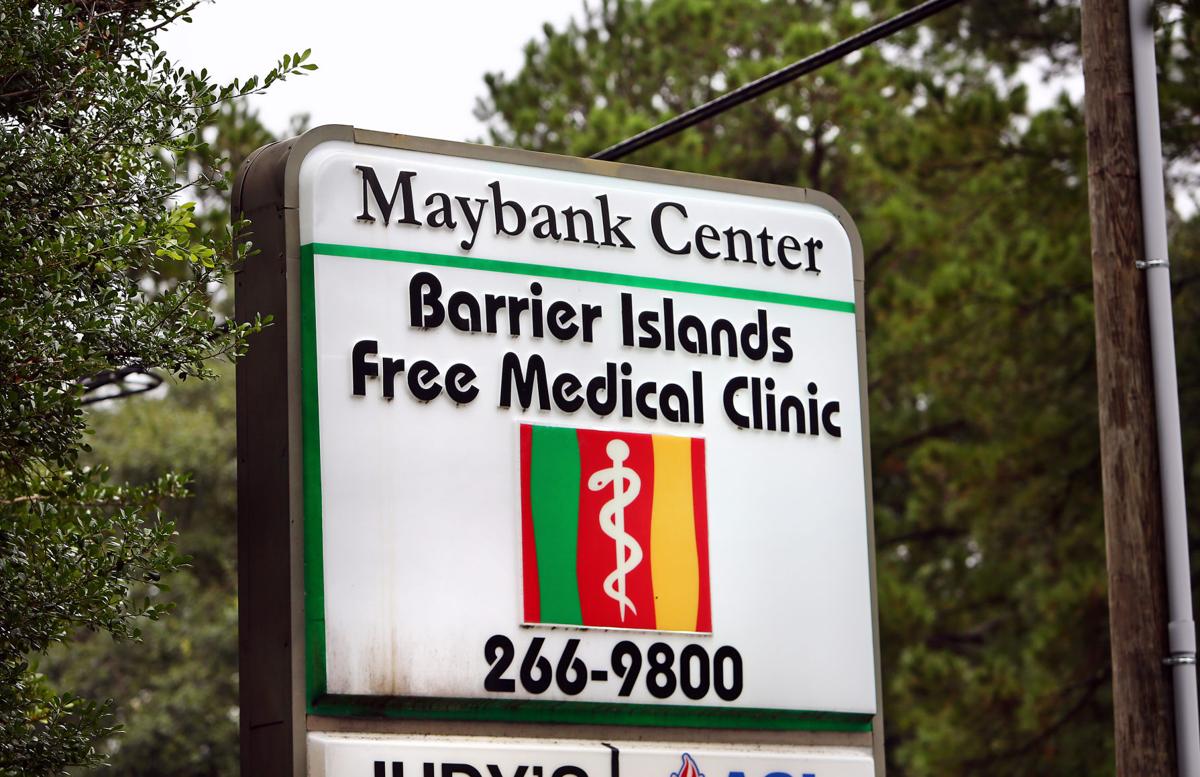 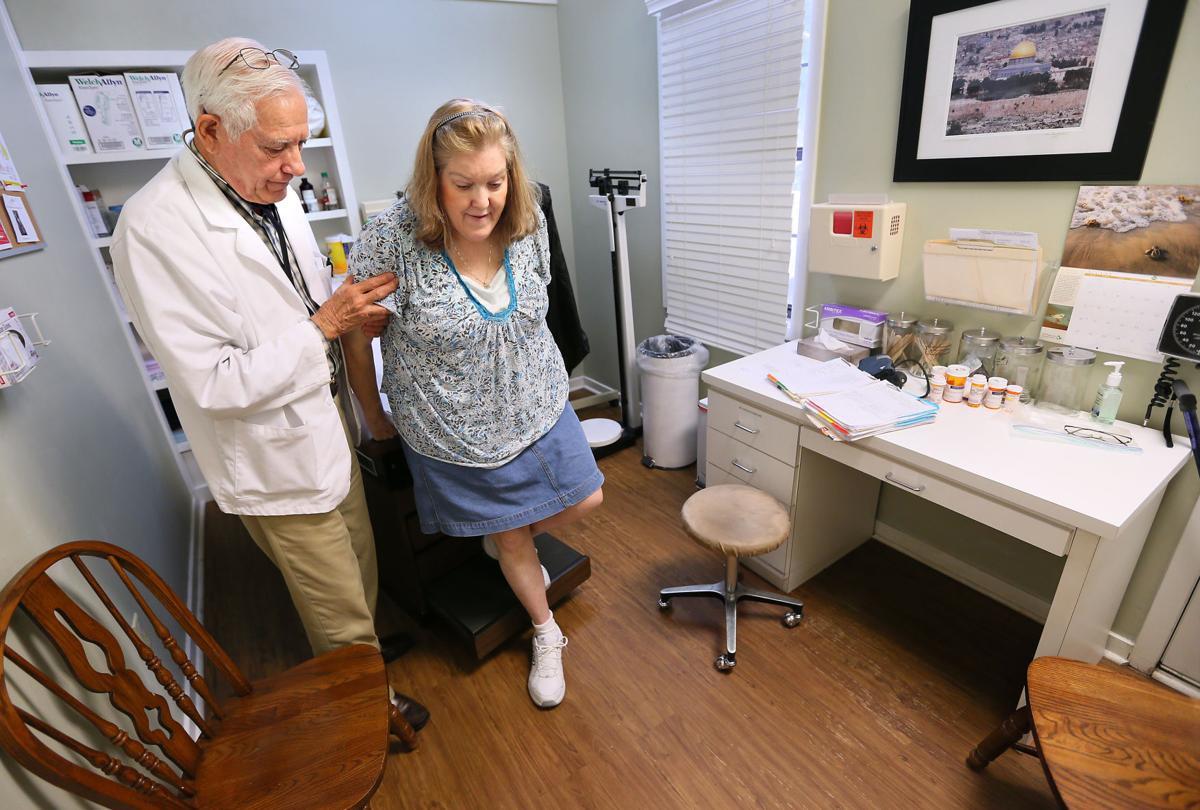 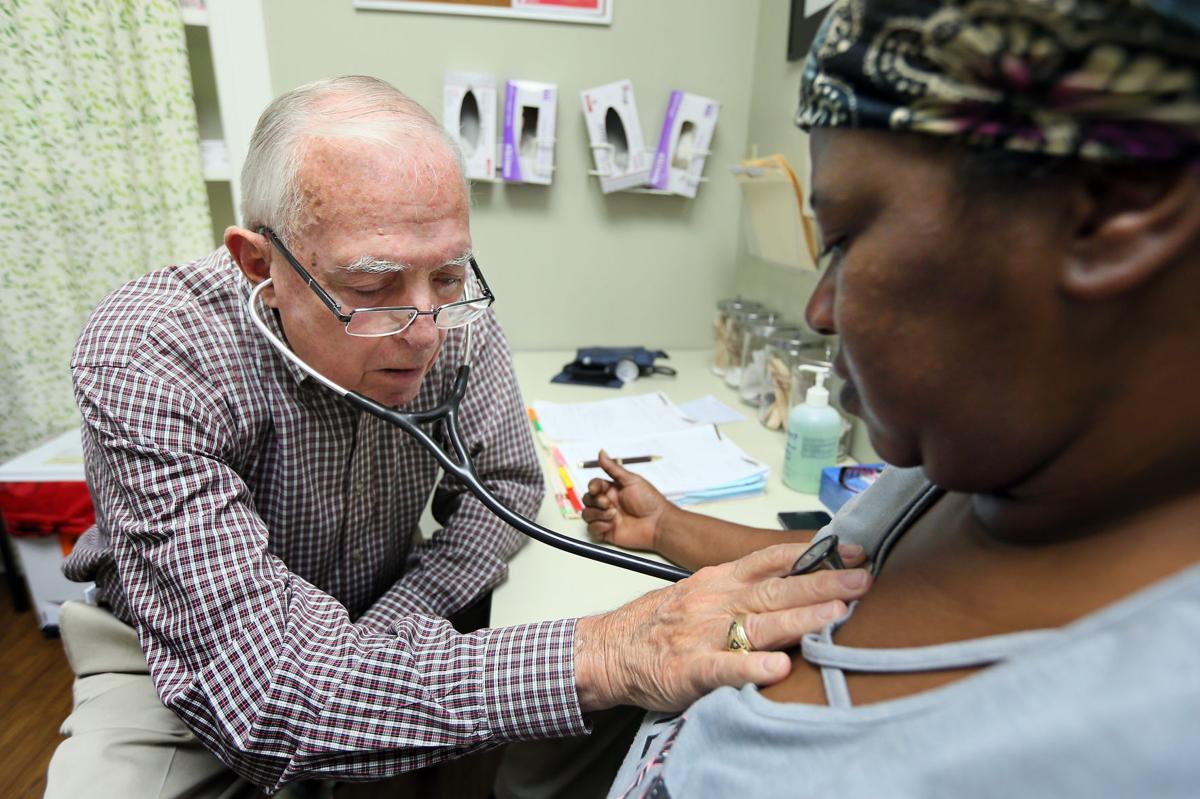 About three months after Dr. Richard Ulmer retired in 2005, he ran into one of his former patients at the grocery store.

They started talking. But she seemed unable to place who he was. When he reminded her, she told him she didn't recognize him without the white coat.

He remembers thinking he couldn't recognize himself without the white coat, either. So he went home and talked with his wife about volunteering.

Ulmer said practicing medicine becomes a part of a doctor's identity. He found a way to continue practicing at Barrier Islands Free Medical Clinic, a free, Volunteers in Medicine affiliate on Johns Island.

"It's a chance to do what one is used to doing without all of the restrictions and problems that go with private practice of medicine," he said.

The free clinic provides care to 350 patients every month. There are about 30 volunteer physicians, many of whom live in surrounding communities such as Kiawah and Seabrook islands, where many doctors have retired.

Once a planned renovation of the free clinic is complete in six months, they'll be able to see 600 patients altogether. But their biggest obstacle remains one of marketing. Doctors at the clinic said they are surprised by how few people know about it.

There is now a national Volunteers in Medicine office, and 88 member clinics across the country.

The clinic in Hilton Head sees 30,000 patients per year. They have 600 volunteers, according to its website.

The Hilton Head clinic estimates it saves local emergency rooms about $2.5 million a year, based on the number of walk-in appointments staff there take annually.

Dr. Raymond Cox, the Hilton Head clinic's director, said the idea for it began when McConnell realized there were retirees who found that retirement left them unfulfilled and were looking for something meaningful to do. The community was in need of health care services, so McConnell found a solution in mostly retired doctors.

Doctors work at the clinics, in part, to escape the slog of insurance billing and the pressure to see as many patients as possible.

Neither Barrier Islands nor the Hilton Head clinic accept government money. They operate mainly on charity.

That is how the Barrier Islands Free Medical Clinic was able to fund the construction of a new building. Dr. Jim Hayes, another volunteer doctor, said he expects the new facility will increase the clinic's capacity and its efficiency.

"That's going to allow us to really take care of the people on this island, and perhaps even expand our services," he said.

Now, patients have to either live or work on Johns, James or Wadmalaw Island to qualify for care at the clinic. They cannot have health insurance and must be below 200 percent of the federal poverty level. Patients incur no or very little costs. They occasionally have to pay for generic drugs, but Hayes said the cost is minimal. The clinic generally does not prescribe narcotics.

For both Hayes and Ulmer, working in the clinic is a way of practicing "pure" medicine. Unburdened by the pressure of making money, they can spend more time with their patients. Ulmer said they don't need to hurry at the free clinic. Through his career, he said he saw on average about 20 patients per day.

"I was demolished at the end of the day."

He now sees less than half that number of patients.

Catherine Holland, 56, is one of the Barrier Islands clinic's patients. She has been coming to the clinic since about the time it opened in 2009.

She used to work at a hardware store, but the business was too small to offer group insurance. And today, she can't afford to buy health insurance on the private market.

Part of the Barrier Islands clinic's advertising problem, Hayes and Ulmer said, stems from patients seeming to think they won't get the same quality of care because the services are free. Holland said she thinks the care she receives at Barrier Islands is better than what she would find elsewhere.

"They just give you a little bit of extra time and TLC," she said.

The clinic has helped her get expensive medications through applications to drug companies. She also has been able to see the same doctor most of the time. Holland said she isn't sure she would even be alive today without the clinic.

The Barrier Islands clinic sees only adults because most children in South Carolina are covered by private insurance or through Medicaid. But South Carolina eligibility rules make it very difficult for adults without children to qualify for the government's low-income health insurance program and leaders in this state did not expand Medicaid eligibility under the Affordable Care Act.

Ulmer said he thinks the free clinics will only become more necessary, especially if the country persists in its belief that health care is not a human right.

Cox said he thinks there will be in a period of disruption in health care for many years. Republicans debated health care reform throughout the spring and summer. Much in health care policy is left uncertain. That will only increase the burden on the neediest patients, he said.

"As long as we go that direction, the free clinics are going to thrive," Ulmer said. "And that's too bad. Ideally, we should go out of business."

Other free clinics in the area

You must live on James, Johns or Wadmalaw Island to qualify for treatment at the clinic. Only patients without health insurance and whose income does not exceed 200 percent of the federal poverty level will be accepted.

Other free clinics in the Lowcountry include:

Community served: East of the Cooper

Our Lady of Mercy Wellness House