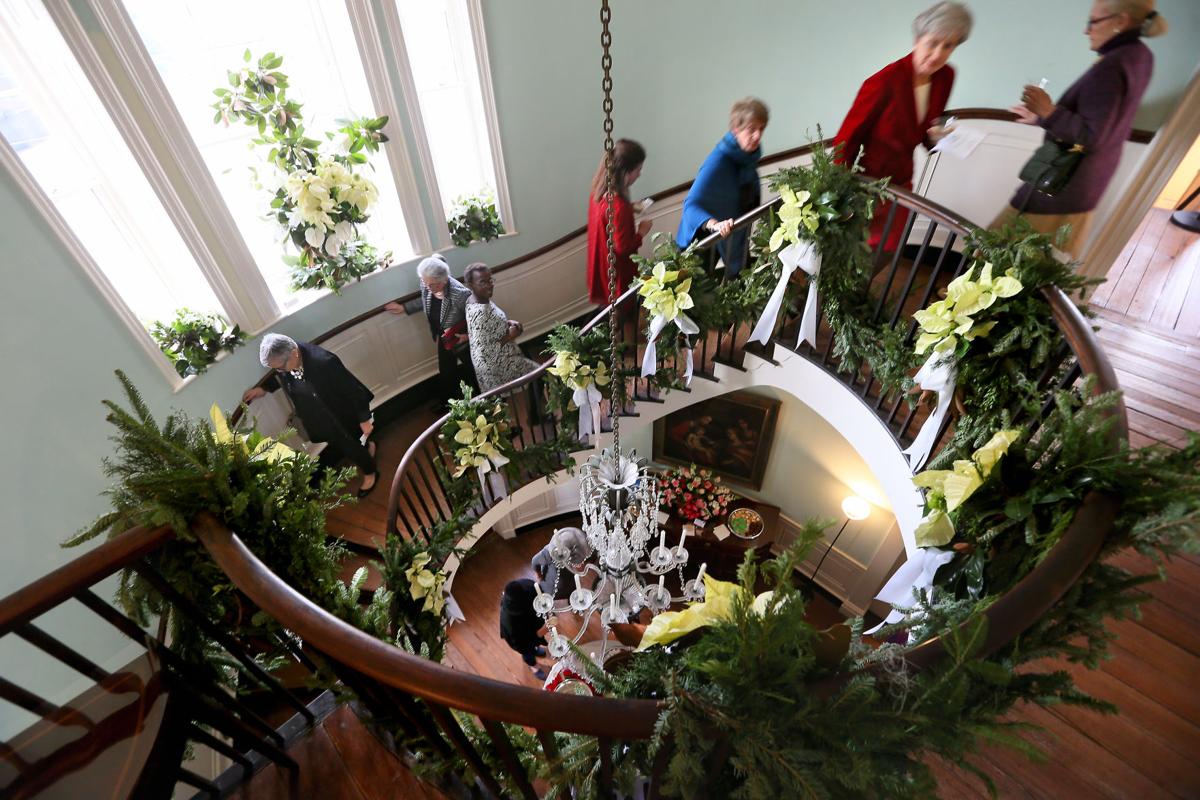 Garland, accented with poinsettias and bows, followed the spiral staircase up to the second floor of the historic Joseph Manigault House at The Garden Club of Charleston's annual Christmas Tea on Friday December 7, 2018. Wade Spees/Staff 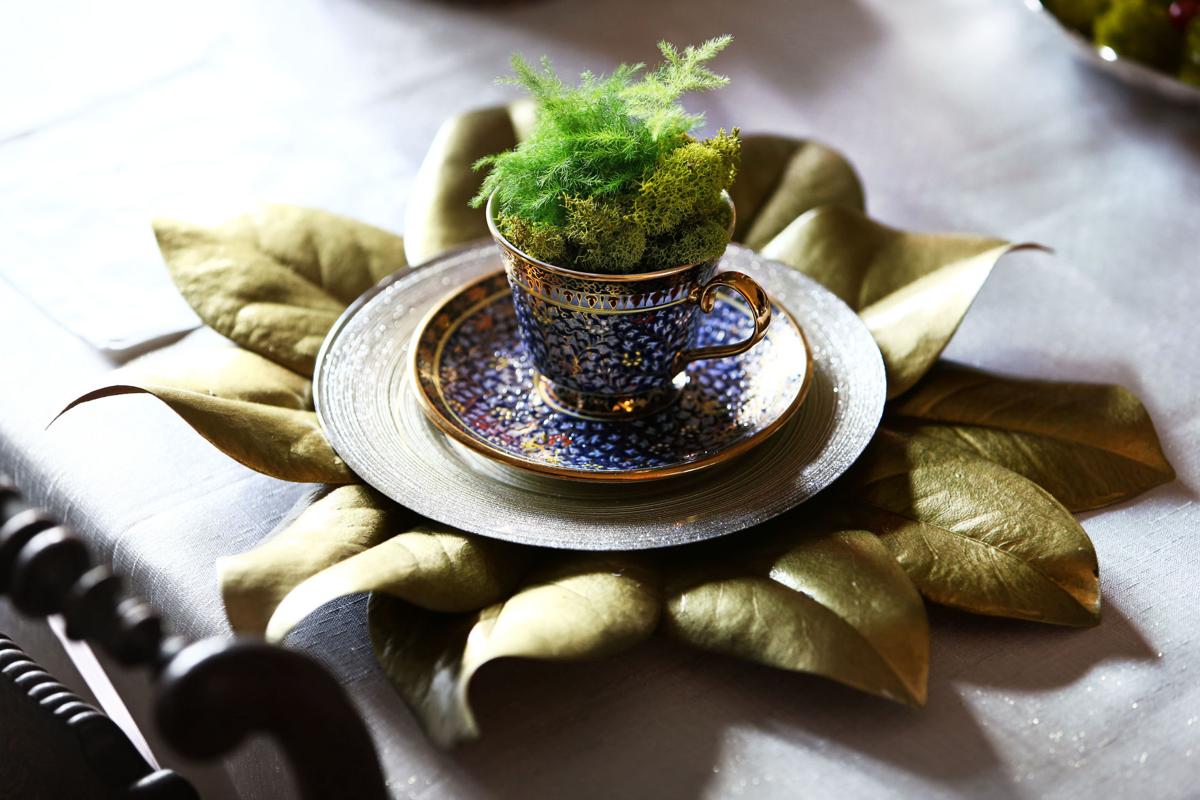 Member Doris Booth's china from Thailand was a vessel for live moss at The Garden Club of Charleston's annual Christmas Tea at the historic Joseph Manigault House on Friday December 7, 2018, with poinsettia-themed decorations. Wade Spees/Staff 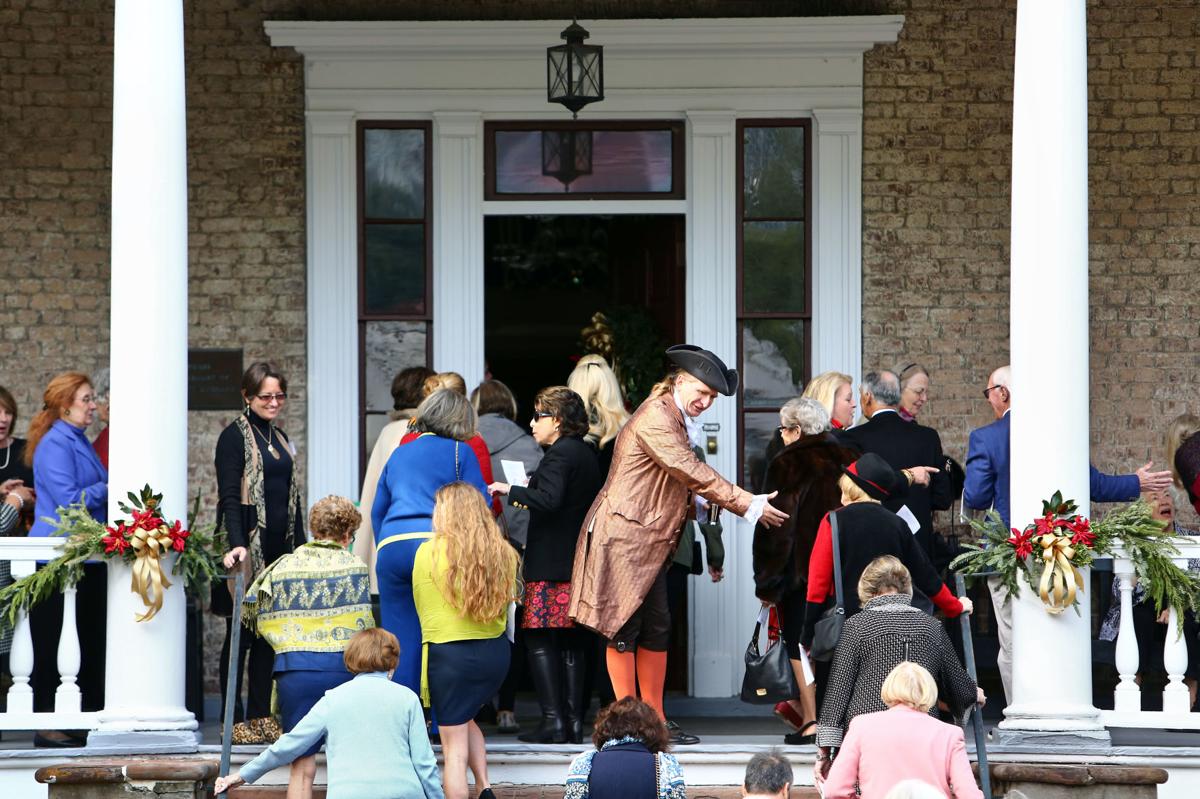 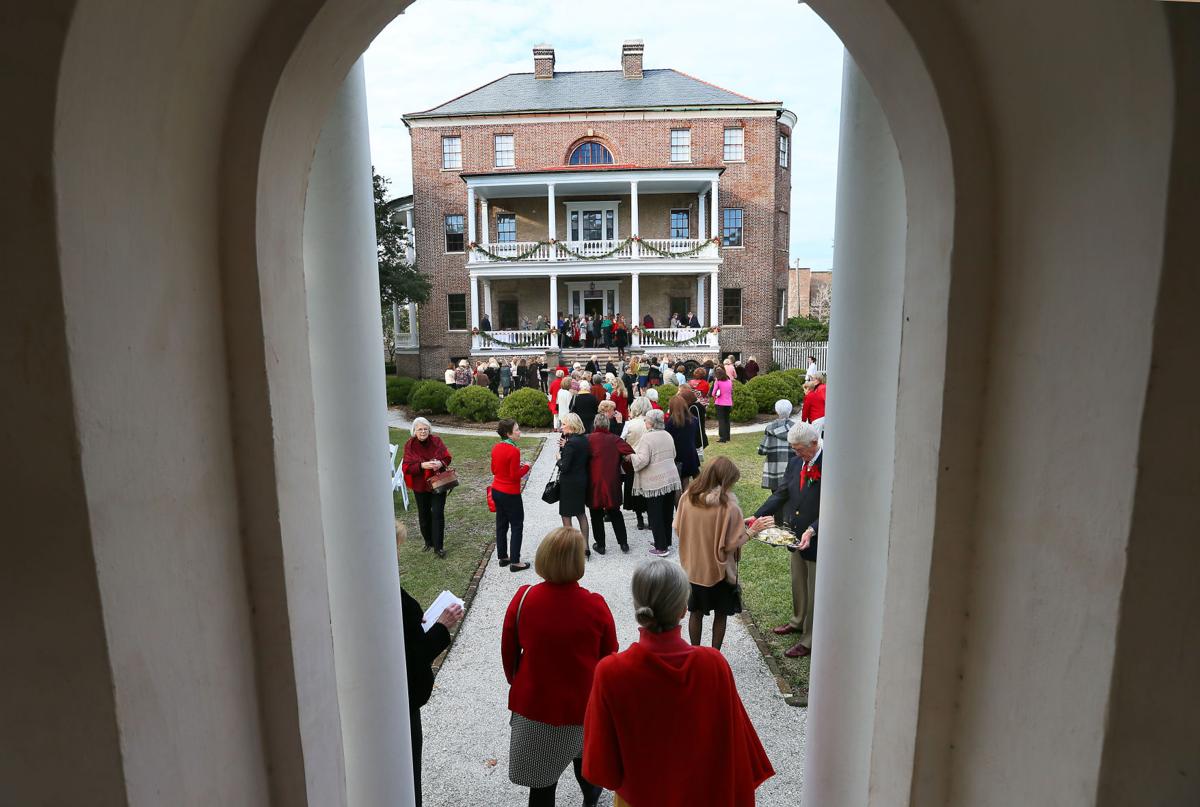 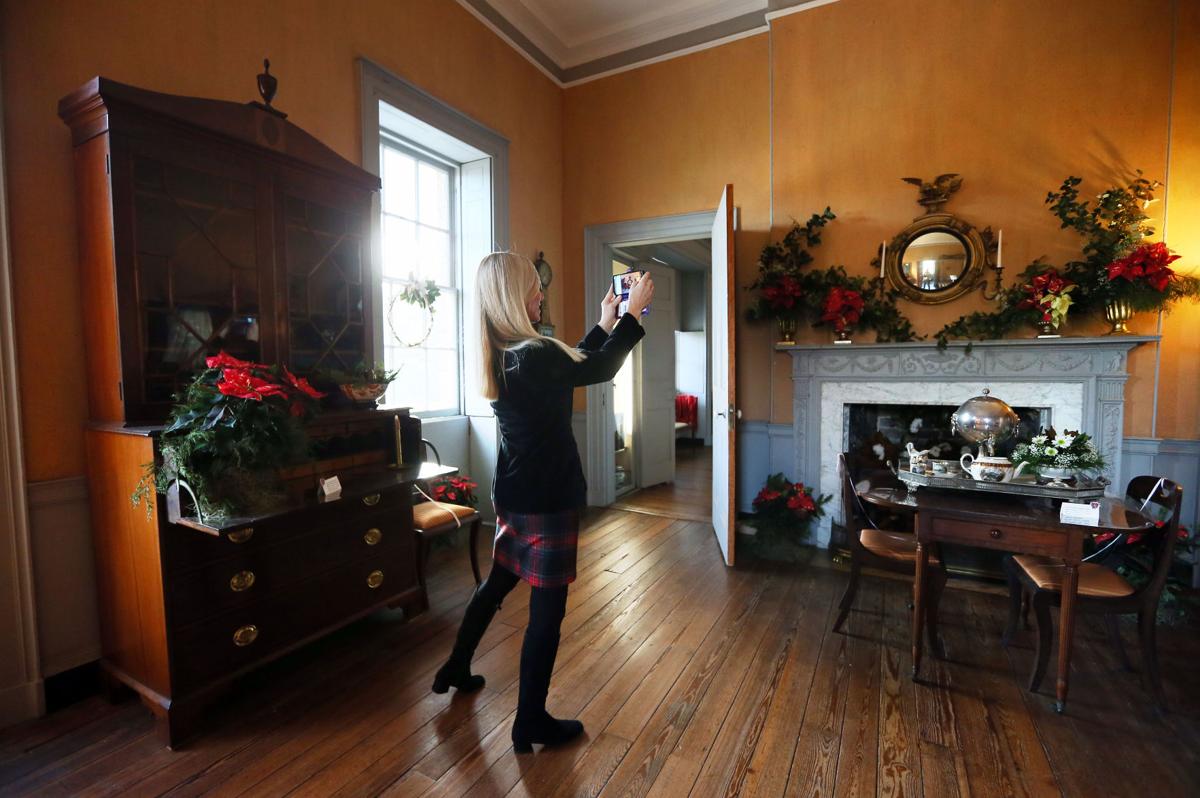 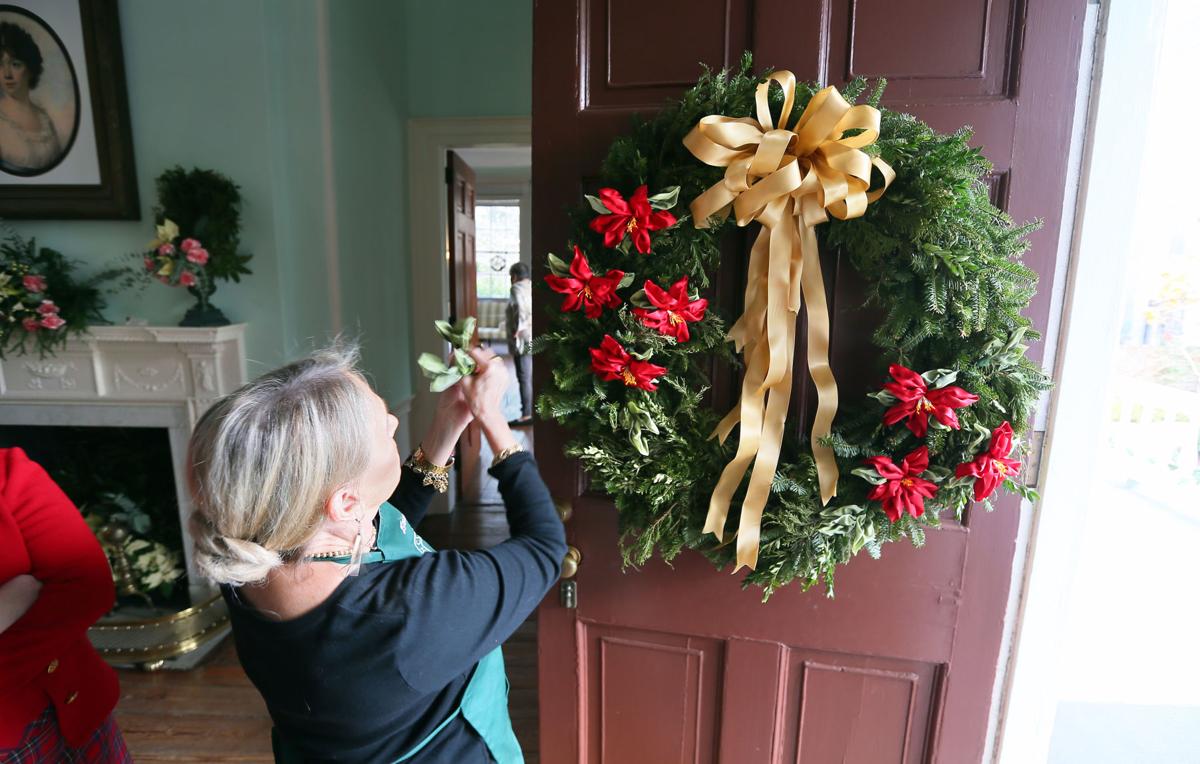 The door gets some last-minute sprucing up at The Garden Club of Charleston's annual Christmas Tea at the historic Joseph Manigault House on Friday December 7, 2018, with poinsettia-themed decorations. Wade Spees/Staff

Garland, accented with poinsettias and bows, followed the spiral staircase up to the second floor of the historic Joseph Manigault House at The Garden Club of Charleston's annual Christmas Tea on Friday December 7, 2018. Wade Spees/Staff

Member Doris Booth's china from Thailand was a vessel for live moss at The Garden Club of Charleston's annual Christmas Tea at the historic Joseph Manigault House on Friday December 7, 2018, with poinsettia-themed decorations. Wade Spees/Staff

The door gets some last-minute sprucing up at The Garden Club of Charleston's annual Christmas Tea at the historic Joseph Manigault House on Friday December 7, 2018, with poinsettia-themed decorations. Wade Spees/Staff

The iconic poinsettia is the most popular potted plant in the U.S., selling 71 million plants each year.

It may come as a surprise that the flower is neither native to the U.S. nor was it intended to be a holiday plant.

Adding to the intrigue, the man who discovered the plant was Joel Roberts Poinsett, born in Charleston just three years after the signing of the Declaration of Independence.

The Garden Club of Charleston dedicated its 2018 decoration of the historic Joseph Manigault House to Poinsett's legacy, dubbing the celebration, “Poinsettias: The Charleston Connection.” Club members were encouraged to use plants that would have grown during Poinsett's lifetime in the late 1700s and 1800s. The display runs through New Years Day.

An eye for design is just one piece of the puzzle. Gardeners also must rely on their wits to figure out how to keep the plants alive and blooming for the weeks the display will be open to the public. Such tricks of the trade include burning the stems of flowers after cutting them.

Jean Hutchinson leads decorations for the garden club. A self-described historian, she giddily chatted with a Joel Poinsett re-enactor as she walked through each room of the house on the day before the Dec. 8 opening. The real Poinsett, she said, is an inspiration for the some 400 gardeners in the Charleston club.

"I would like to have met him," she said. "I was born in the wrong century."

Born in 1779, Poinsett called Charleston his home, but spent much of his life traveling the globe. He studied medicine in Scotland and collected plants in Asia and Europe. In 1881, he served as Special U.S. Envoy to Argentina and Chile, and in 1815, he traveled 2,000 miles throughout the American West.

From 1817 to 1820, Poinsett served as head of the South Carolina Board of Public Works and oversaw the construction of bridges, roads, dams and ports. In 1820, he was elected to the U.S. Congress. President Andrew Jackson appointed Poinsett to serve as the country's first ambassador to Mexico.

Poinsett was still a passionate botanist. While in Mexico, he introduced the American Elm in exchange for some cuttings of the hibiscus and mimosa plants. He discovered his namesake plant growing wild and free on the side of the road in Taxco, Mexico.

Native to Mexico, poinsettias were once prized by the Aztecs for their medicinal, commercial and religious value. In the wild, they can grow up to 12 feet. They are known for their fiery red color. Poinsett sent cuttings of the plant back to South Carolina.

While he loved the Mexican plant, Poinsett did not think highly of the country's residents. In an 1829 letter to then Secretary of State Martin Van Buren, Poinsett shared his thoughts on the indigenous people.

"Their only furniture a few coarse mats to sit and sleep on, their food indian corn, pepper and pulse, and their clothing miserably coarse and scanty. It is not that the low price of labor prevents them from earning a more comfortable subsistence in spite of the numerous festivals in each year, but they either gamble away their money, or employ it in pageants of the Catholic Church, in which pagan and Christian rites are strangely mingled. All these evils, if not cured entirely, would be greatly mitigated by education."

Septima Poinsette Clark, for whom the Charleston "crosstown" is named, was a descendant of people enslaved by the Poinsett family.

It was long after Poinsett's death in 1851 that the Poinsettia flower became a symbol of the holidays. Today, the flowers come in traditional red and have been bred in the following colors: white, pink, lemon, salmon, pink and white, red and white and red with pink flecks, called, "Jingle Bells." Poinsettia Day is Dec. 12.

Doris Booth, a new member of the club, certainly feels a special connection to the history. Like Poinsett, Booth has spent most of her life traveling the world with her husband, who works for the U.S. State Department.

The couple most recently lived in Thailand, where Booth was inspired by a cultural reverence for lush and vibrant horticulture. She worked, too, as a visa processor for Burmese refugees. After moving to Charleston two years ago, Booth joined the garden club. This year, she agreed to the difficult task of decorating a room of the house.

Inspired by her travels, Booth set a small round table in the middle of the room with pieces of china she brought home from Bangkok. Salmon-colored Poinsettias were surrounded by delicate pieces of bright green moss and topped with painted cranberries.

A handful of garden club members, including Hutchinson, marveled at Booth's designs.

"It rocks," Hutchinson said. "It's great. It's inventive."

Booth smiled, and shrugged her shoulders.

The Garden Club of Charleston's Annual Christmas Tea was held at the historic Joseph Manigault House on Friday December 7, 2018. This year's p…