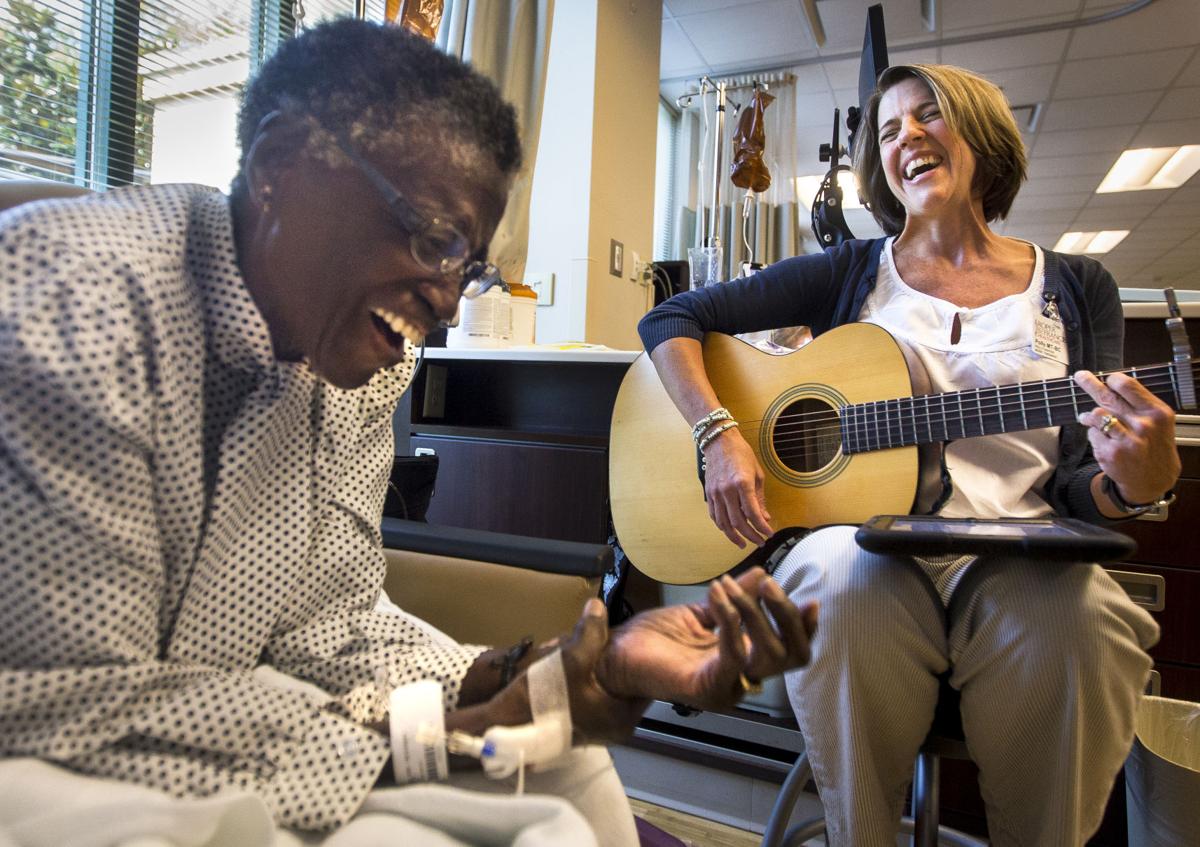 Rosa Green (left) smiles as she sings along with music therapist Polly Hunter during her treatment at Roper St. Francis Cancer Center on Thursday, August 1, 2019 in Charleston. Hunter has been bringing her guitar and working with patients at the center for the last five years. She said it's those moments of joy when everyone sings and gets into the music that make it so positive and worthwhile. Andrew J. Whitaker/Staff 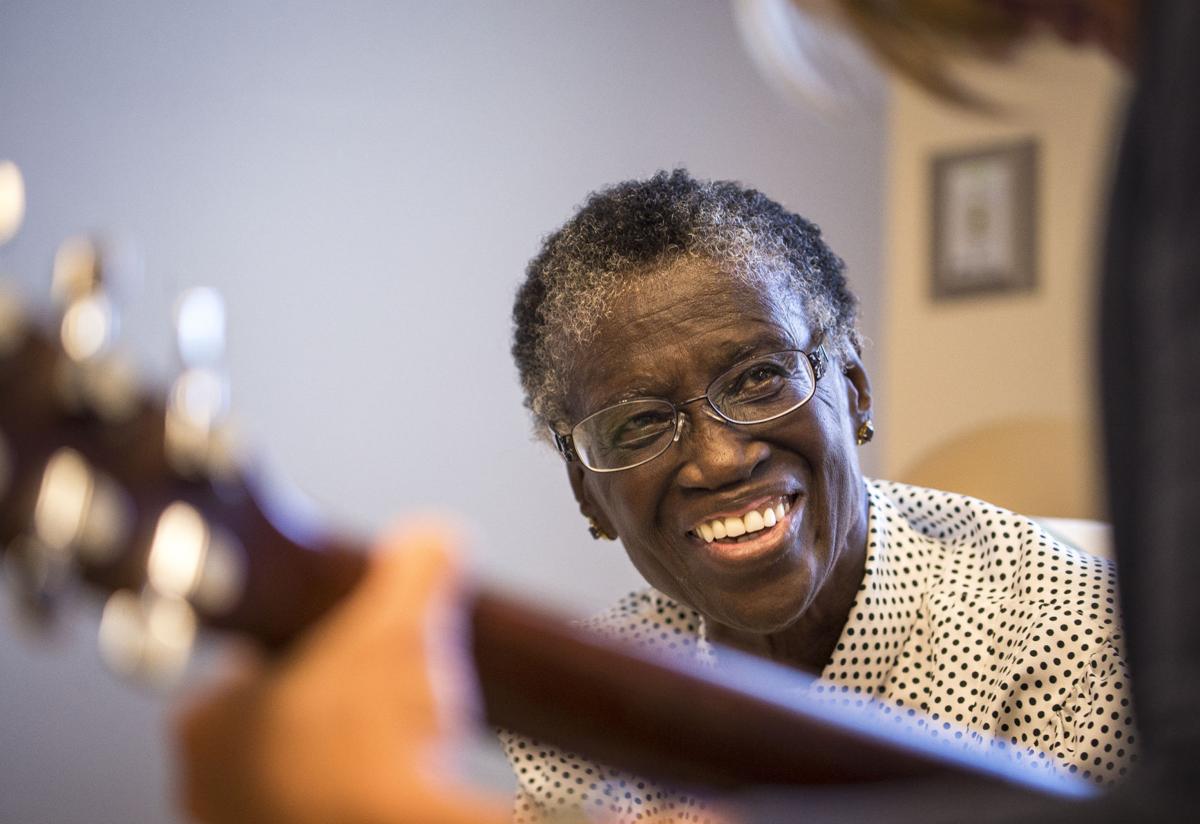 Rosa Green smiles as she sings along with music therapist Polly Hunter during her treatment at Roper St. Francis Cancer Center on Thursday, August 1, 2019 in Charleston. Andrew J. Whitaker/Staff 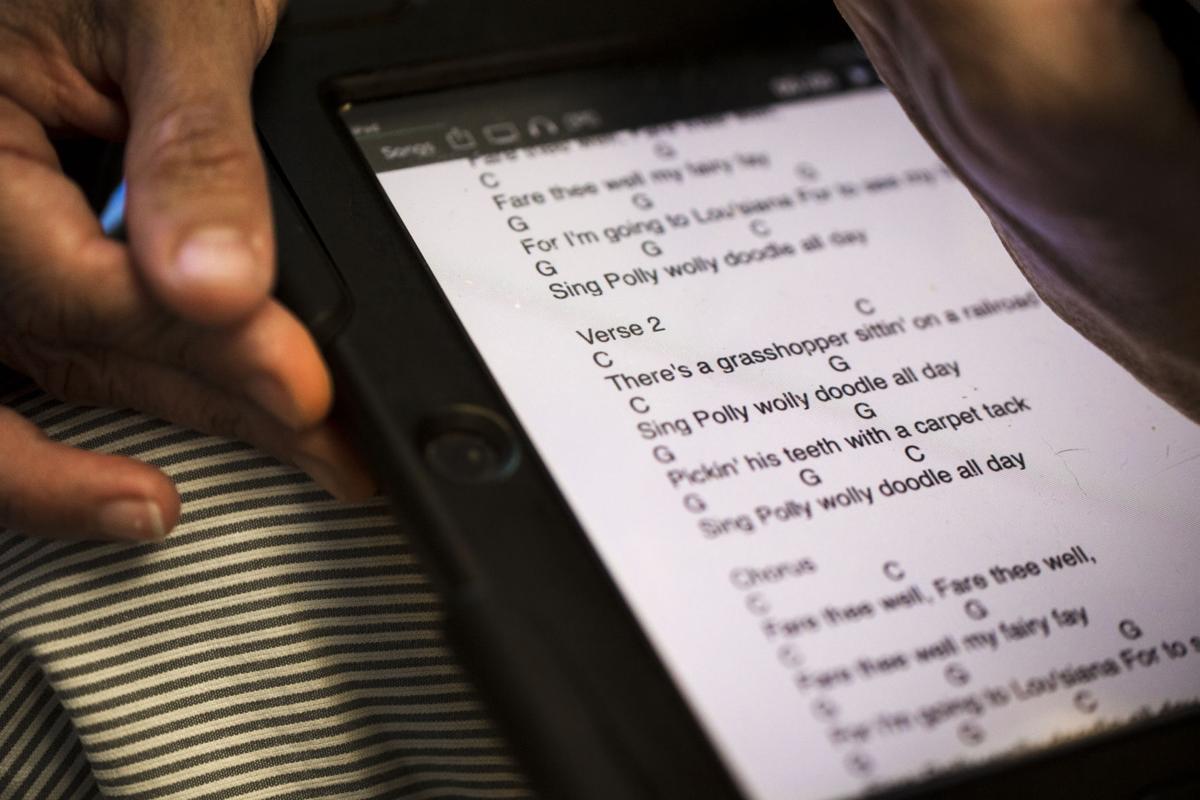 Song lyrics for music therapist Polly Hunter are displayed on a screen as she visits patients at Roper St. Francis Cancer Center on Thursday, August 1, 2019 in Charleston. Andrew J. Whitaker/Staff 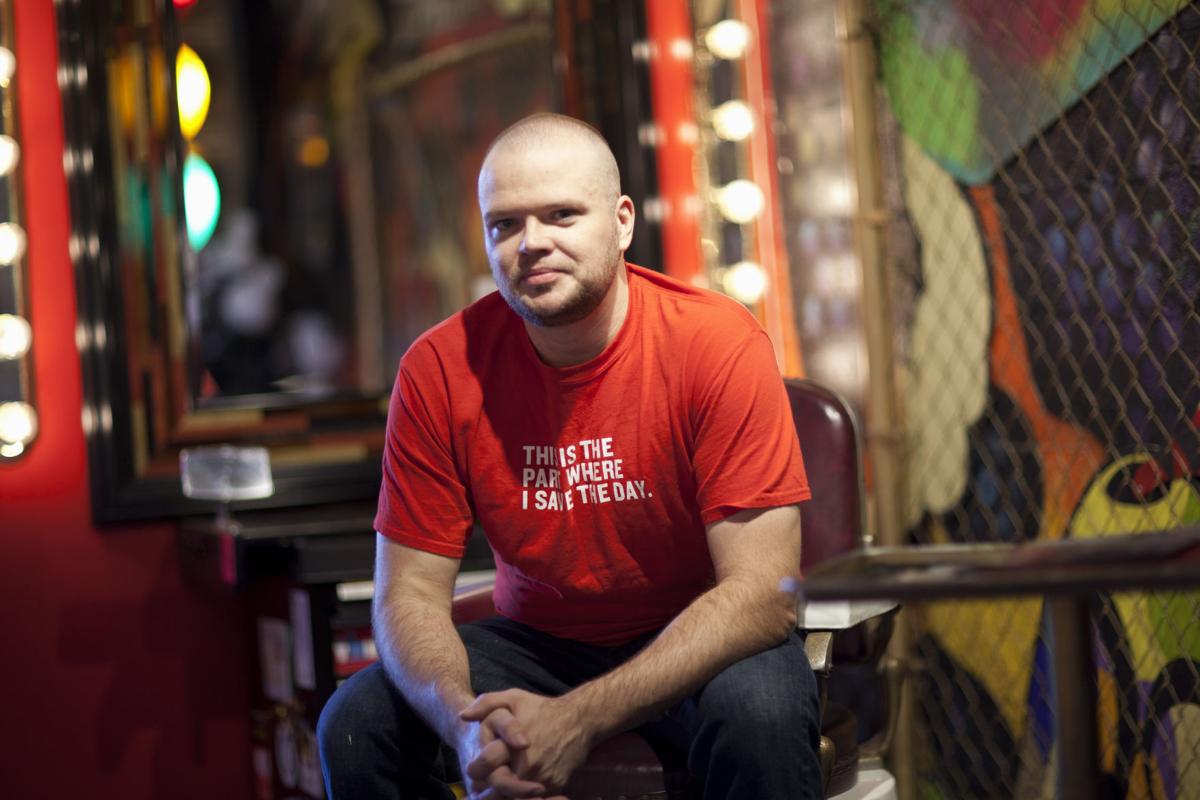 Ian Morris releases albums every month that are used for "frequency-minded meditations." In the last four years, he has released more than 50 albums. Ian Morris/Provided 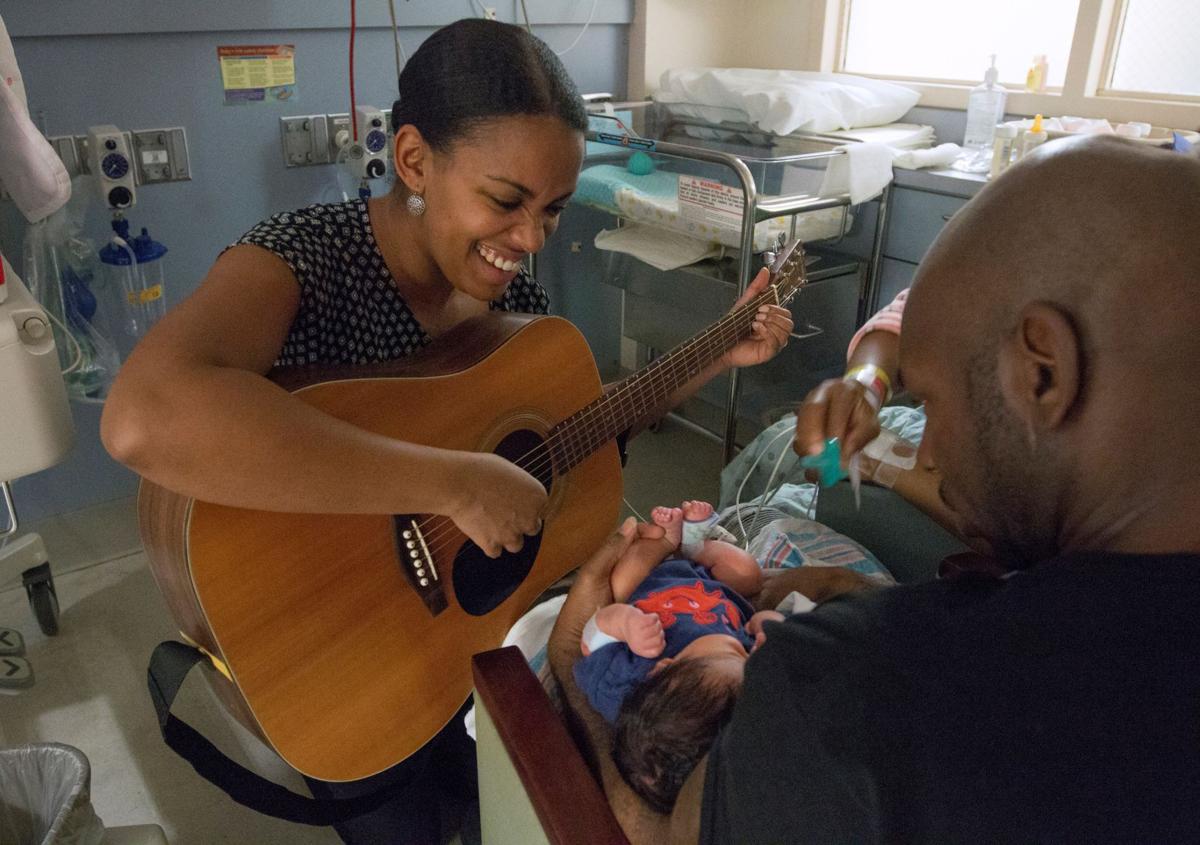 Tammy Flovin works with a patient at the Medical University of South Carolina. Flovin is a music therapist with the hospital and often spends time with pediatric patients and grieving families. Sarah Pack/ Provided

In the last four years, Ian Morris has created more than 50 albums and over 300 songs through his Charleston-born company, Listening to Smile.

The music's purpose, he said, is for healing.

“No one is going to listen to a sound and fall ill," he said. "Sound healing has a lot of benefits.”

Morris is a part of an industry of sound and music experts who are combining their passion for music with people's health needs. Over the years, more and more people like Morris have emerged as sound healing experts and music therapists who have highlighted the relationship between sound and healing.

“This is my dream job, I love helping people with music," he said.

Past studies have long shown this relationship. In a 2013 article, the American Psychological Association highlighted that University of Alberta researchers discovered that patients who were listening to relaxing music while getting an IV inserted experienced a lot less pain.

That same year, a study in the Journal of the American Medical Association Pediatrics also discovered that music was helpful in soothing pediatric emergency room patients.

With Morris' albums, he creates what he calls frequency-minded meditations.

The albums are released once a month to more than 90 partners throughout the world. The albums try to take into account tones that have been found to be beneficial for conditions such as anxiety, depression and, most importantly, stress, he explained.

Morris said he sees a lot of people use the music for practices such as group sound meditation sessions. Though he still recommends people consult with physicians, he sees this the practice as largely beneficial.

“Frequency is a support system," he said.

In a 2015 clinical study of patients with fibromyalgia, researchers found that low-frequency sound stimulation led to a reduction in medication dosage for more than 70 percent of patients. Nearly 30 percent completely discontinued medication.

'The music does wonders'

Schools and hospitals have picked up on the health trend, too.

Tammy Flovin works as a full-time music therapist with the Medical University of South Carolina and Polly Hunter provides music therapy for patients at the Roper St. Francis Cancer Center.

Both are certified music therapists through the Certification Board for Music Therapists and both have completed required clinical work. They have also obtained degrees with a focus on music therapy. Charleston Southern University, where Hunter was educated, is a local institution that had over 50 students in their music therapy undergraduate degree program last year.

A common misconception with the work that they do is that they are at hospitals simply to perform, they said.

In their experience, Flovin and Hunter said they try to meet patients where they are. A lot of their sessions vary. They sometimes will play music that matches the heart rate of a patient.

In Flovin's case, she might try songwriting with patients. Hunter said she will often look to see if a patient is grimacing in pain or if they are showing signs of depression or isolation. Then, she said she'll try to play music they prefer and talk them through a session.

She works largely with hospice and cancer patients. She even remembered a situation during which she got a nonverbal patient to sing out loud with her. Eventually, after more sessions, that patient could even talk a little after a song.

Flovin often works with grieving families, children and suicidal patients. She said she can remember working with a new mother who was having thoughts about not wanting to live anymore.

She said she eventually got the mother to a place where she was crying and singing to her baby. For her, it was one of the first times she can remember seeing the power of music therapy.

“Just seeing a patient become so relaxed," she said. “You see their heart rate go down.”

Flovin and Hunter said they often see patients experience a decrease in their respiratory and heart rates after a session. Flovin said that this is especially valuable for children who are sometimes agitated in hospital settings.

“Usually, 90 percent of the time, the music does wonders.” Flovin said. “I had a patient tell me that they can actually breathe a little better now.”

How people in Charleston are using boxing to support mental health

'Pacemaker for the brain'

Local health experts are looking to take the music and healing conversation further. Dr. Jacobo Mintzer, a researcher with the Roper St. Francis Research and Innovation Center, did a TEDx talk  in May about the relationship between music and healing.

Mintzer said he was fascinated with the idea that this function could potentially be reversed.

In their research, he said, they saw cases where music helped an individual with Parkinson's with their walking. They also saw cases where patients who were nonverbal from dementia actually sing songs they could remember during music therapy sessions.

And he emphasized that these aren't theories. “We know those things to be true," he said. “If you’re skeptical, it’s very easy to stop being skeptical.”

Mintzer said they are hoping to get more funding to do research to understand in more detail why music has the impact that it does. They also are hoping more Charleston residents reach out to them with their own discoveries.

For Morris of Listening to Smile, his experience was personal. He moved to Charleston in 2011 and had complications after getting his wisdom teeth pulled. He had a bacterial infection and some of his facial muscles were damaged.

After consulting physicians, he eventually started researching and doing mediation and sound healing. Within a year, he lost 110 pounds after rearranging his lifestyle and diet.

“I would always make the joke, ‘It’s the frequencies man,'" he said.

"Everyone needs a project, this one helps people feel better," said Madonna Lewis, owner of the Cabbage Row Needlepoint Shoppe in Charleston.