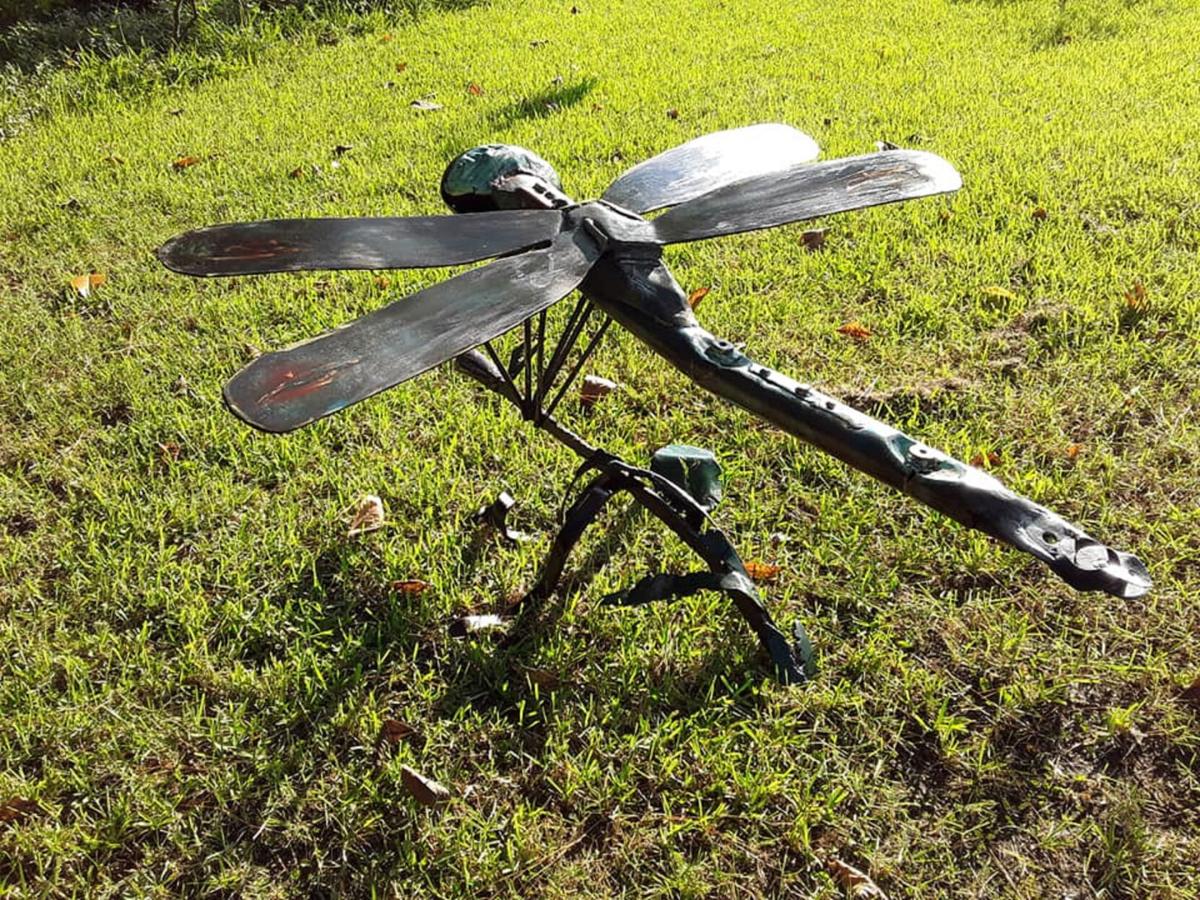 Jason Elam has been working in welding since he was 15 years old. One his favorite things about making custom art and garden pieces from metal is its durability. Provided 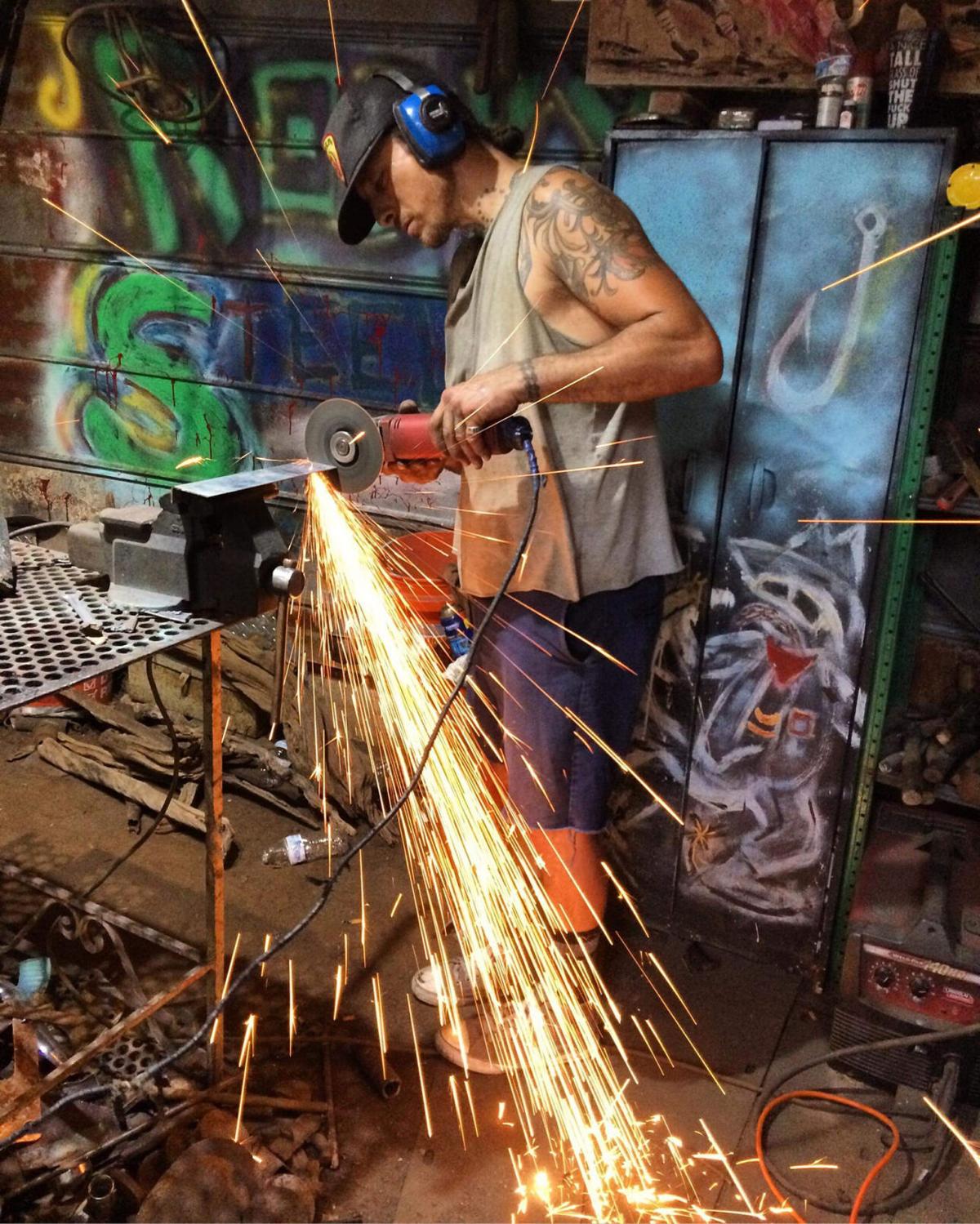 Jason Elam is a Summerville resident and owner of Rocky Steel, a custom welding and ironwork business. During the day, he usually works in industrial welding while building structures, such as high-rises. His focus turns to making custom metal furniture and art pieces when he is home. Provided 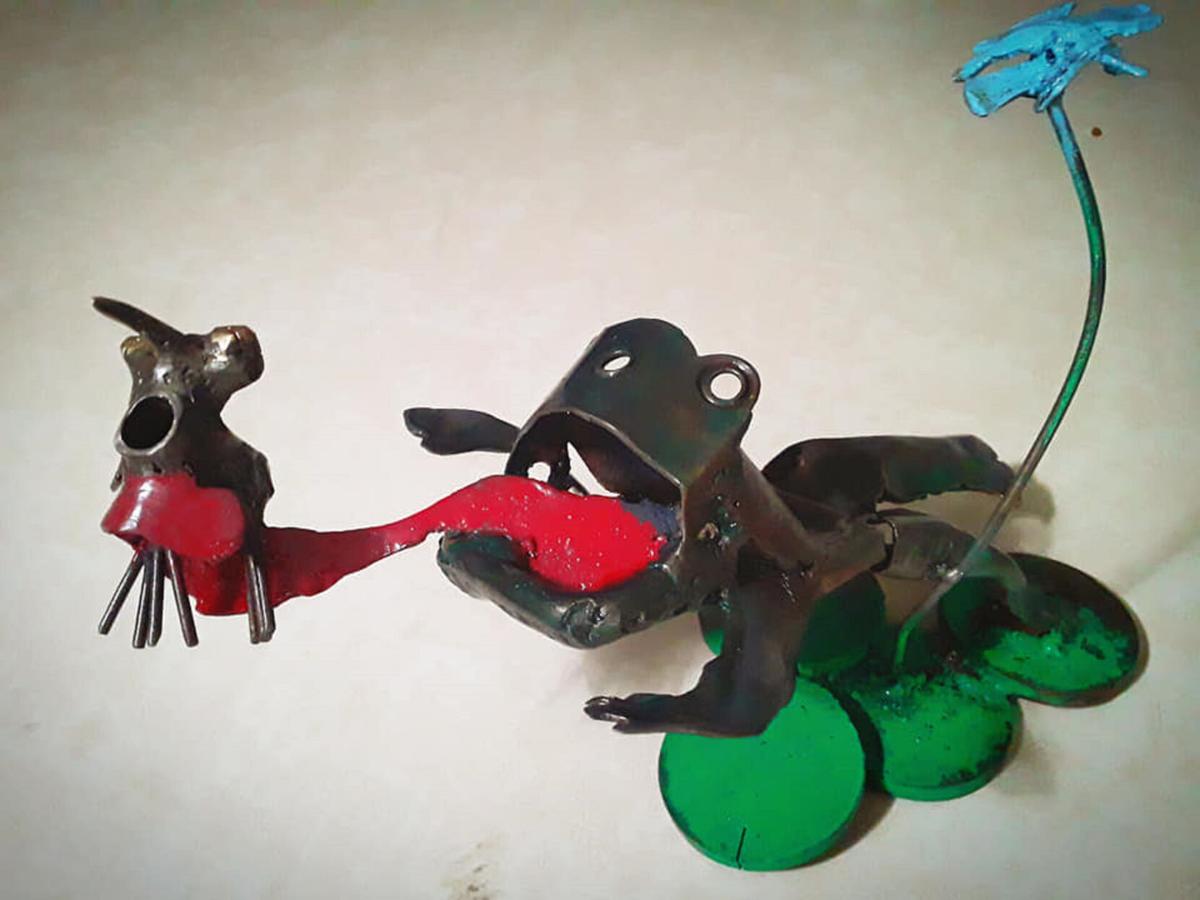 Jason Elam is a Summerville resident who makes and sells custom metal furniture and art pieces. Some of his work is sold at local art and farmers markets in the Summerville area. Provided 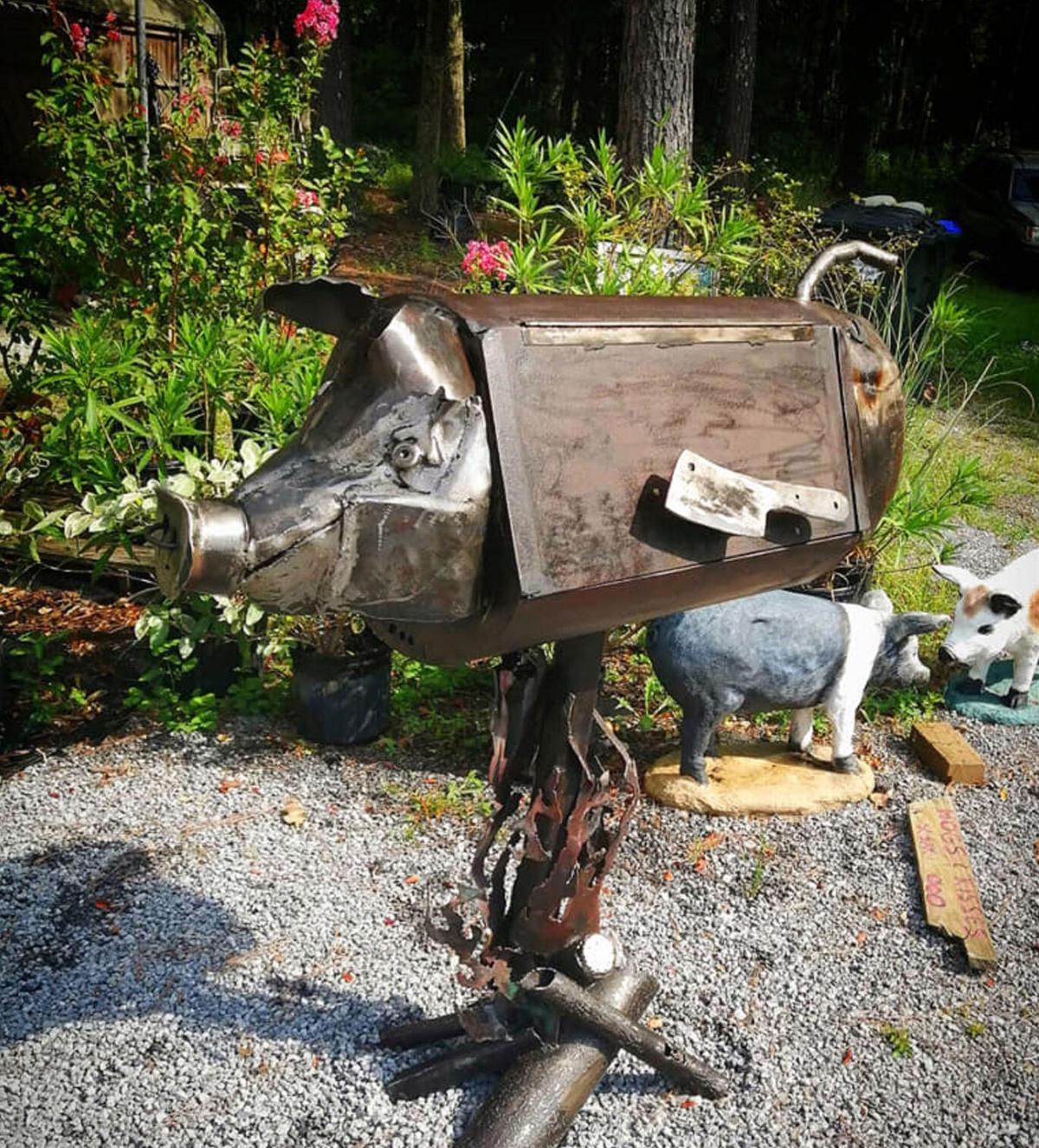 Summerville welder and ironworker Jason Elam was hired to make a custom piece for Baker's BBQ of Summerville to welcome customers. The piece was made from an old grill found by the owner of Baker's BBQ. Provided

Jason Elam has been working in welding since he was 15 years old. One his favorite things about making custom art and garden pieces from metal is its durability. Provided

Jason Elam is a Summerville resident and owner of Rocky Steel, a custom welding and ironwork business. During the day, he usually works in industrial welding while building structures, such as high-rises. His focus turns to making custom metal furniture and art pieces when he is home. Provided

Outside of Baker's BBQ of Summerville there's a molded metal pig welcoming customers in the parking lot.

The piece started off as just an old tossed-out grill that was discovered by the owner. After he reached out to Jason Elam, a local welder and owner of Rocky Steel, it morphed into the metal art sculpture it is now.

"I like doing fun, different ideas like that," said Elam, a Summerville native. "I just wing it."

Elam has been working in welding and ironwork ever since he was a teenager fixing his car in his parents’ garage. Since then, he has grown into an industrial welder working on various buildings and construction projects under the Rocky Steel brand name.

In the last few years, he's expanded his skill set to include more artistic pieces and metal sculptures that mimic things such as animals and plants. Some of his work has been featured and sold at art and farmers markets in the Summerville area.

"The artist thing is new to me," he said.

It all started when Elam purchased his Summerville home. One of the first things he did was redo it by adding in some of his metalwork. He took a steel beam from one his jobs and made a bathroom sink.

He's built coffee tables and other furniture. Eventually, more people came across his work at his home and started requesting their own pieces.

"That kind of got things going," he said. "I had people pushing me."

One person was his wife, Adrienne. Jason said he still struggles to call himself an artist. Working with metal is just his thing, he said. He doesn't see himself falling into any specific category.

Adrienne said he definitely is an artist.

"It's hard to convince him of that," she said.

Some of her favorite things she said he's made her include a rose crafted from copper and a knife he made with an alligator tooth for a handle and a nail file for the metal piece.

In the 17 years she has known him, she said he has always been creative.

"He see things other people don't see," she said.

Jason is now working on a chandelier made out of chains that he is calling a "chaindelier." He's also planning to build a giant Tyrannosaurus rex.

Some of pieces just start with him seeing a piece of metal. Even something as random as an old broken washing machine has given him inspiration.

"That's an eyeball for an animal," he said.

Typically, he'll spend the day working to build high-rises then come home and build small frogs and crabs to sell for people's yards and homes. He'll toss on his headphones and work with metal pieces until he feels whatever he is building is finished.

He also has a genuine love for metal. He'll put it anywhere, he said. His favorite part about the medium is that it can't really be messed up.

If there is a mistake, an expert like himself can just weld it and fix it. The name Rocky Steel comes from his childhood nickname Rocky, the "Rocky" film franchise and his love of metal.

"I try not overthink it," he said. "It's just metal mayhem."

Adrienne envisions Jason being commissioned to make large pieces for Summerville. Maybe even something for Hutchinson Square. She said one of the best things about his pieces is the material.

She's a hairdresser and has a client who wants a custom turtle for her garden. Because of how metal can last, something like that could become a family heirloom, she said.

"It will last forever," she said.

She just wants Jason to be happy and have as much artistic freedom as he possibly can.

"He's a good man turning into a great artist," she said.