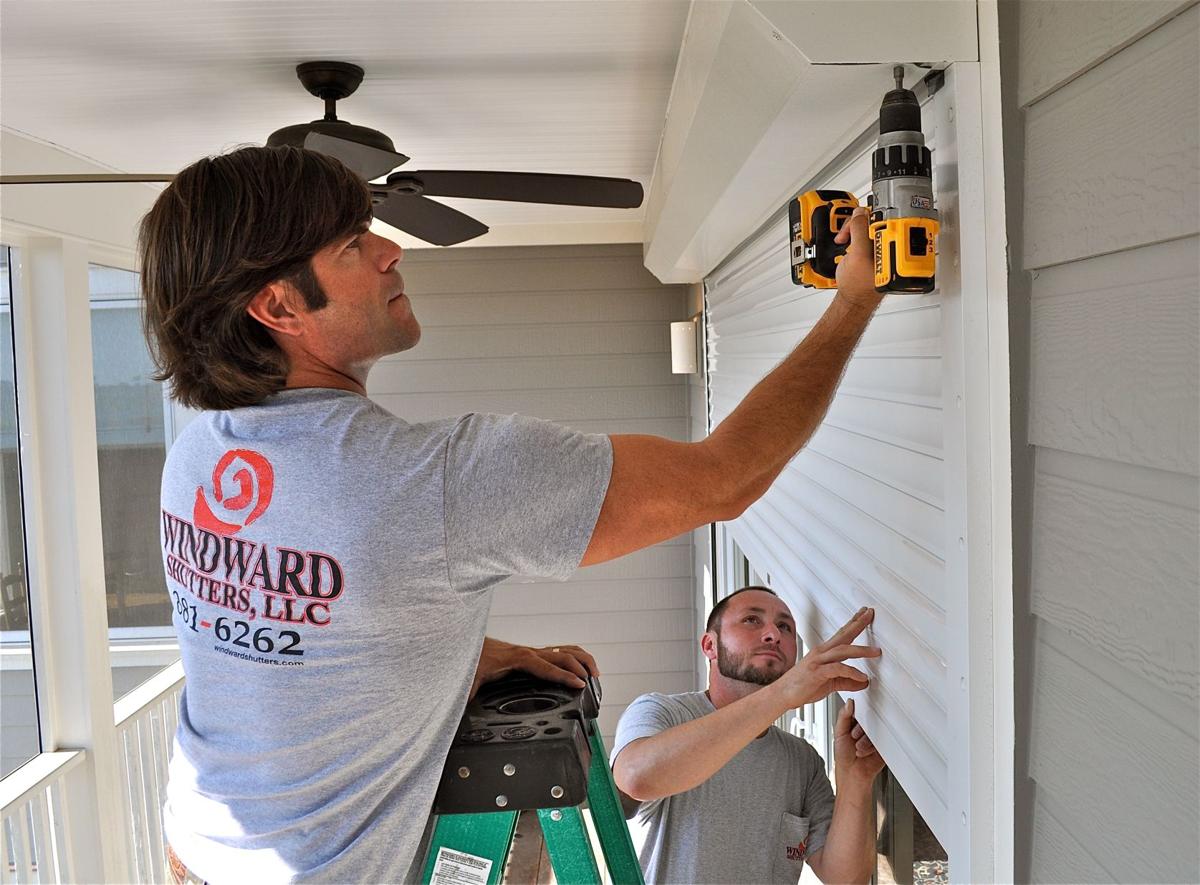 Timothy Smith (left), president of Windward Shutters of Mount Pleasant, services a motorized, roll down shutter with the help of technician Billy Joe Byrd at the home of Bill King on Wild Dunes this week. David Quick/Staff 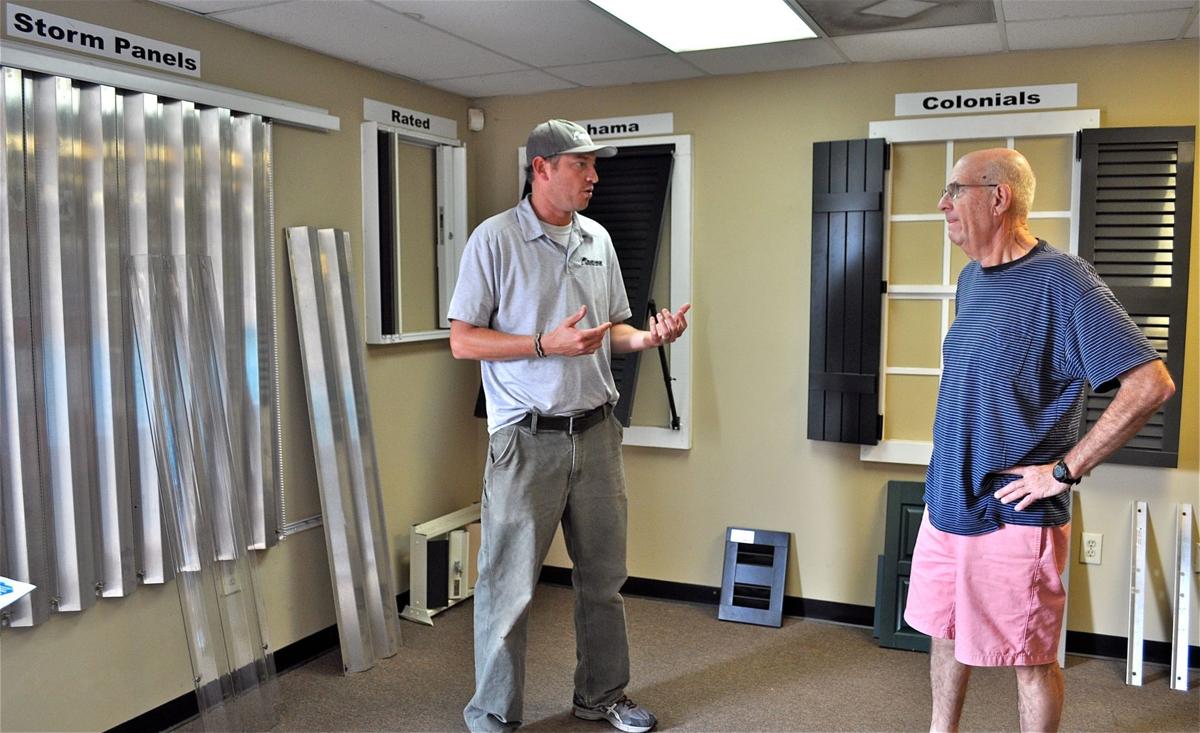 Timothy Smith (left), president of Windward Shutters of Mount Pleasant, services a motorized, roll down shutter with the help of technician Billy Joe Byrd at the home of Bill King on Wild Dunes this week. David Quick/Staff

In at least one way, New York transplant Susan Kaufman has better intuition than most locals and other longtime Lowcountry residents.

“I was reading that major hurricanes hit Charleston about once every 30 years,” says Kaufman, noting that hurricanes Gracie and Hugo brutalized the Lowcountry in 1959 and 1989. “So I figured we were due for one in 2019.”

Kaufman moved to the area in 2011, a year before Hurricane Sandy ravaged the New Jersey and New York coastline, and experienced a bit of Hurricane Irene. She wanted no part of the life upheaval caused by the likes of Gracie, Hugo or Sandy.

So last year Kaufman prepared, having a few trees that seemed obvious threats cut down and having 13 hurricane-rated window shutters and four automated “roll-downs” installed on her house in the Charleston National subdivision in Mount Pleasant.

Retrofitting her house, built in 1998 before current building codes, shutters and roll-downs, wasn’t inexpensive. It cost about $12,000, but it’s already paying dividends in peace-of-mind.

A few weeks ago, when Hurricane Matthew was zeroing in on Charleston and her neighbors were struggling to nail or screw plywood on a few windows, the Kaufmans took about two hours to batten down the hatches and leave town.

“I felt a great sense of relief while we were gone that not only was the house protected from the storm but (from) potential vandals,” says Kaufman.

As suspected, local hurricane shutter businesses say they got busy in the days leading up to Hurricane Matthew, and the days after.

”We get inundated with phone calls,” says Timothy Smith, president of Windward Shutters, the longest operating hurricane shutter business in the area. “We become a 1-800 hotline for everybody’s chaos. While we’re talking to someone, there will be five or six messages left.”

The Windward Shutters office remained busy in the weeks after the storm, but the staff expected that to ease as locals settled back into their routines.

“We had offers willing to pay double but it’s just not possible to do it,” says Cooper, noting — like Smith — that storm-rated shutters are a custom-made product. "It takes four weeks minimum to order a product, custom manufacture it and install them.”

And because many existing customers had not used shuttering systems in years, they needed help with maintenance, hardware and diagrams.

The week after the storm remained “chaotic and crazy,” Cooper says, but he expects that Hurricane Matthew has created enough interest in storm-rated shutter systems that his company will remain busy through winter.

“People have gone so long without the fear or threat of a major hurricane that people haven’t thought about it," he says. "I believe this storm was very eye opening to a lot of people that it’s very much a threat and possibility. I think people are a little bit freaked out by the sporadic weather that we’ve had — really hot, really cold, last year’s historic rain, big thunderstorms — here and all around the United States and the world. It’s climate change and Mother Nature. You never know what it’s going to do anymore.”

Keeping the roof on

One misconception that people have, Smith and Cooper say, is that shuttering systems are just about the windows. And what’s the point of protecting windows if the roof blows off your house?

Smith says, “If one window breaks and the wind gets in the house, you get lift on the roof from inside. Meanwhile, pressures (from the hurricane) are pulling at the roof and winds are twisting on it from the outside. … There’s a lot going on during a hurricane.”

But there are other misconceptions.

Some think that you need to shutter only vulnerable windows, but insurance companies generally won’t give discounts unless the entire house is protected.

“A lot of people who live on the beach think they need to do it (shutter windows) from the beach side of the house," Smith says. "You’re only 25 percent likely that the winds are blowing from the direction, and if it’s a direct hit, the winds will blow in a different direction on the back end. There’s also no flying debris coming from the ocean. Debris will be coming from your neighbors' houses."

Smith and Cooper both say the latter option is the least preferred, a loophole of sorts that gives people an option to save money, especially on entry-level homes.

Smith says many people aren’t physically capable of climbing a ladder and hoisting plywood while someone screws it in, and that if pre-cut plywood isn't stored, it's likely to be pitched to the curb as trash.

While plywood takes up space, corrugated aluminum panels are lighter, thinner and stronger, as well as less expensive than shutters or automated roll-downs, Cooper adds.

“You can stack the panels in the corner of your garage. It takes up a fraction of the space compared to plywood," he says.

As for price, Cooper says an aluminum panel for a standard window, measuring 36 inches by 60 inches, is about $150 installed, compared to a Bahama shutter at $600 or a roll-down at about $650.

Another less expensive option, fitted fabric covers, may not keep windows from breaking from a wind-blown projectile, but they will offer a level of protection from wind and flying debris.

Bahama shutters also provide privacy and shading from direct sunlight while not completely obliterating views. Many come with operable louvers allowing a homeowner to adjust how much he or she can see outside.

Cooper says his business also offers shutters that aren’t storm-rated, but are still “operable” and could offer some level of protection.

“Over the last few years, we’ve dramatically done more of that (aesthetic shutters), but I think we’ll see more storm protection because people who are moving here and are just now feeling their first hurricane threat.

“Matthew wasn’t a direct impact. It skirted up the coast as a Category 1. But I think the threat of it happening was an eye-opener.“