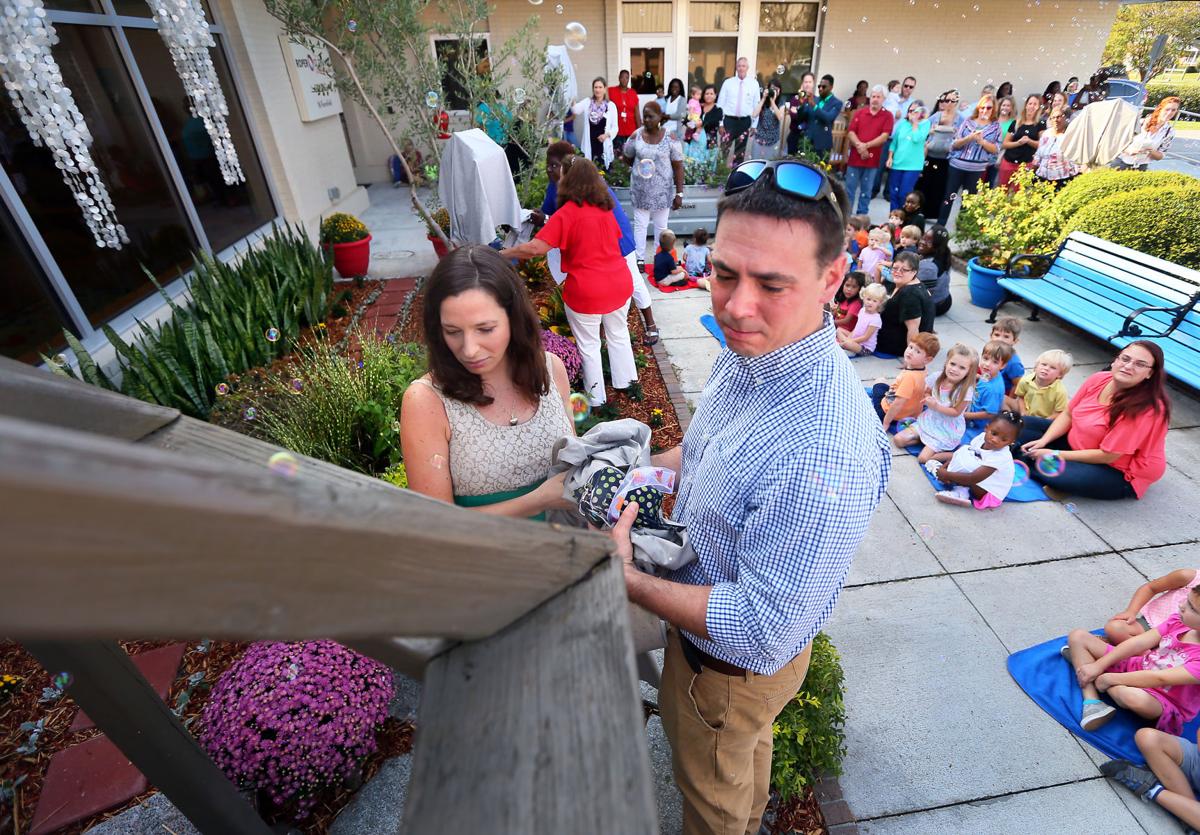 Allison and Dan Harrold unveil a child-sized gazebo in "Clover's Garden," dedicated to the memory of their 9-month-old daughter. The garden is at the Roper St. Francis Learning Center in West Ashley. Friday, Sept. 29, 2017. Wade Spees/Staff 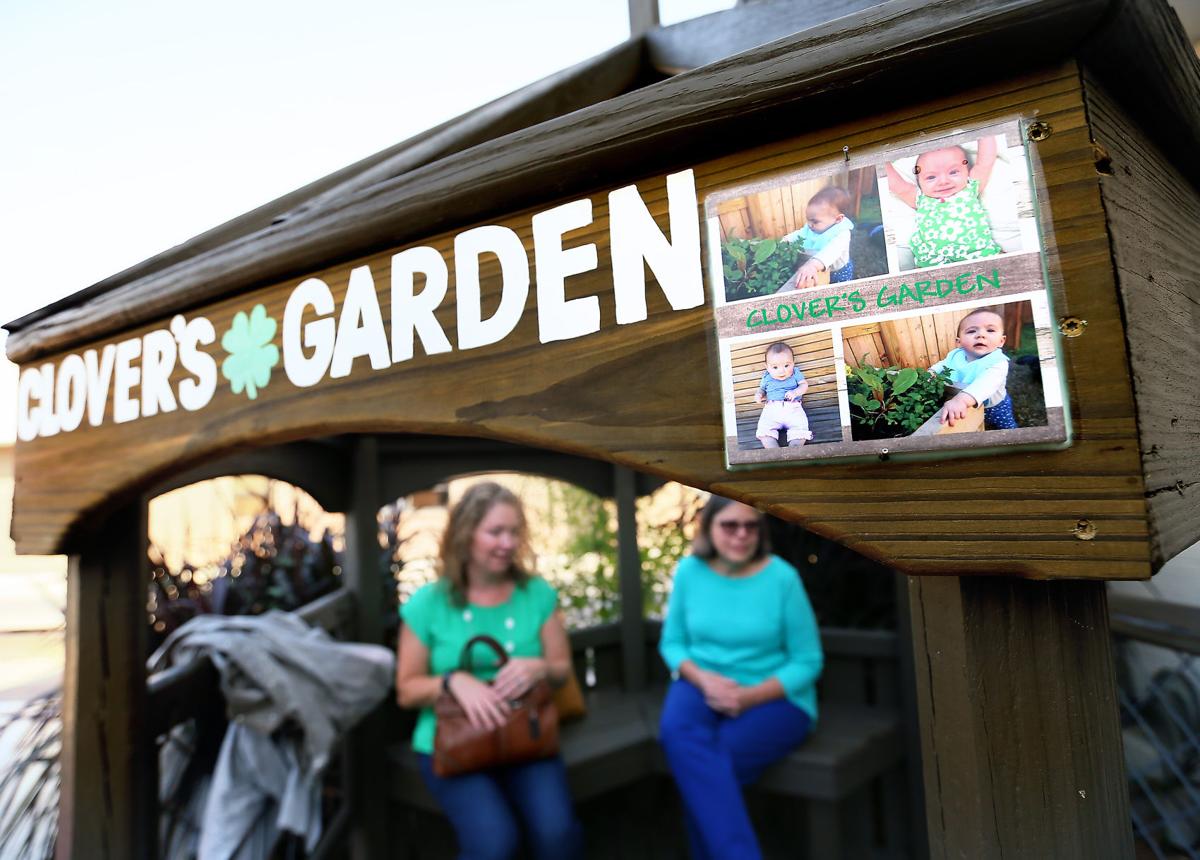 Pictures adorn the entrance to the gazebo in Clover's Garden, dedicated to the memory of Allison and Dan Harrold's 9-month-old daughter. Amber Marflak (left), a colleague of Allison's, and Allison's mother Darlene Whitaker were at the dedication at the Roper St. Francis Learning Center in West Ashley on Friday, Sept. 29, 2017. Wade Spees/Staff 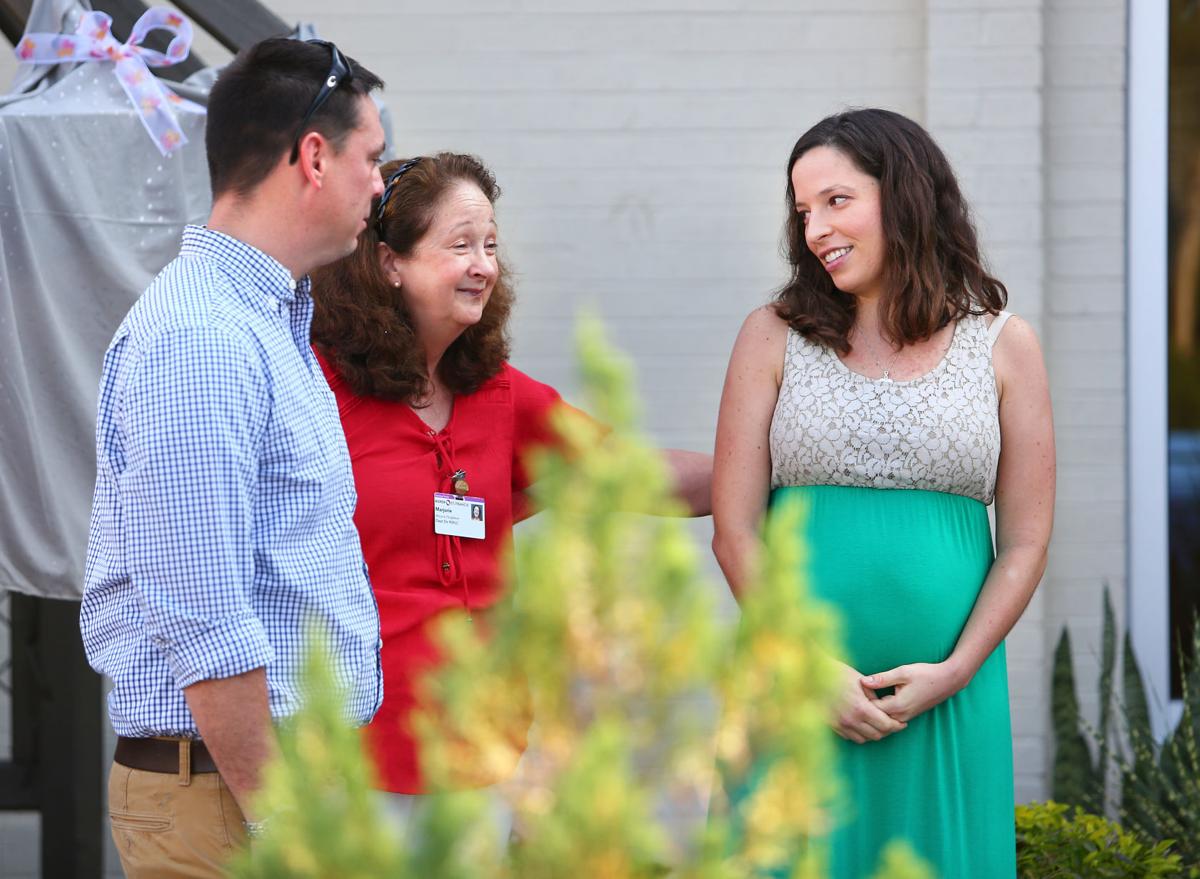 Allison and Daniel Harrold stood in a gazebo built for their baby girl and wiped away tears. Thousands of bubbles floated by in the garden; children reached up to pop them. The Harrolds pulled a cloth off a sign at the head of the gazebo, revealing the words "Clover's Garden."

"I know that she would love this garden," Marjorie Fitzgibbon, director of the Roper St. Francis Learning Center, told the group of kids.

On a Friday morning in late September, the group of children, Clover's former peers, planted clover seeds and sang a song for their friend, a baby who died of sepsis on April 1, mere days after her parents noticed she seemed not to be feeling well.

Months later, the Harrolds want parents to notice the signs of sepsis in their own children. Also known as blood poisoning, sepsis can set in when the immune system overreacts to an infection. And while there is no single test for sepsis, there are warning signs Allison and Daniel wished Clover's providers had picked up on.

Clover could have been saved by the right antibiotics at the right time. But by the hour doctors realized the child was going into septic shock, she needed too much all at once.

"The immune system goes into overdrive," said Allyson Moe, a nurse and specialist in emergency services at Roper St. Francis. "It not only kills the infection, it also damages the organs, which can lead to organ failure and death. So it's very serious."

Clover's parents thought she might have been infected initially by a cut.

It is most often seen in hospitals, and most often among the very young, because their immune systems haven't fully developed, or the very old, who suffer from weakened immunity. About 40,000 children every year are hospitalized for sepsis, according to the Children's Hospital Association, and all told, it kills more people than breast cancer, Moe said.

Clover had a fever, mottled skin, elevated heart rate and no appetite. Later, her leg swelled. Her symptoms didn't respond to Tylenol or Motrin. In hindsight, those signs pointed to sepsis, the Harrolds said. But sepsis can be hard to identify, and is often mistaken for other conditions.

"When you have certain symptoms, just ask your doctor, 'Could this be sepsis?'" Allison said. "In health care, you do have to advocate for yourself, for your family members."

Clover was born last year, four years after her parents were married. Allison used to pick four-leaf clovers when she was a kid. She still wears a pair of green clover earrings.

Clover was reaching the age where she was developing a personality. Her parents said she hardly ever took naps — she was too interested in the world. Her teeth popped through her gums during the last days of her life while she was in the emergency room.

Fitzgibbon, the Learning Center director, remembers walking by the glass door to Clover's classroom and seeing her smiling face plastered against the glass.

"She was the best ambassador," Fitzgibbon said. "She was a normal child, she was inquisitive about everything. She was just into everything, which is a normal 9-month-old."

The Harrolds are both nurses at Roper St. Francis. But Allison said while Clover's sickness was unfolding, they weren't thinking as nurses, but as worried parents.

There is no surefire way to identify sepsis, said Moe, the emergency nurse. Diagnosing the condition requires a slew of tests, which often aren't called until too late because the symptoms, including fever, can mimic other common illnesses. Screening in emergency departments is important, Moe said.

"There's just not one test for sepsis," Moe said. "You have to really put a lot of pieces together to diagnose sepsis. You have to have that really high level of suspicion."

Allison and Daniel don't want to alarm people. But they do want other parents to trust their instincts, and they suggest that they bring up the possibility of sepsis to care providers if they're worried.

Daniel said it almost felt like an episode of "House"" Everyone was bouncing around ideas of what Clover's condition could be. But no one hit the mark and her providers didn't order the lactic acid test that identified Clover's sepsis until it was too late.

"There's that whole perception of parents freaking out too much about little things with their children," Allison said. "Sometimes I think it can be missed."

Moe, too, urged parents to trust those feelings.

"Parents have a gut feeling about their kids and they know when something is not right," Moe said.

The Roper St. Francis Learning Center serves the hospital system's employees in West Ashley. In her 40 years of caring for children, Fitzgibbon has never lost a charge.

"This was tough," Fitzgibbon said. "Probably the toughest thing I've ever faced."

Fitzgibbon said the Harrolds still come to the center to talk to Clover's teachers and to interact with some of her former peers, who are now 1-year-olds.

The Harrolds are on the center's waitlist again: Allison is due in March.

The chances of preventing death from sepsis are better if doctors screen for the condition early. Here are some of the symptoms of sepsis in babies, according to The Rory Staunton Foundation: