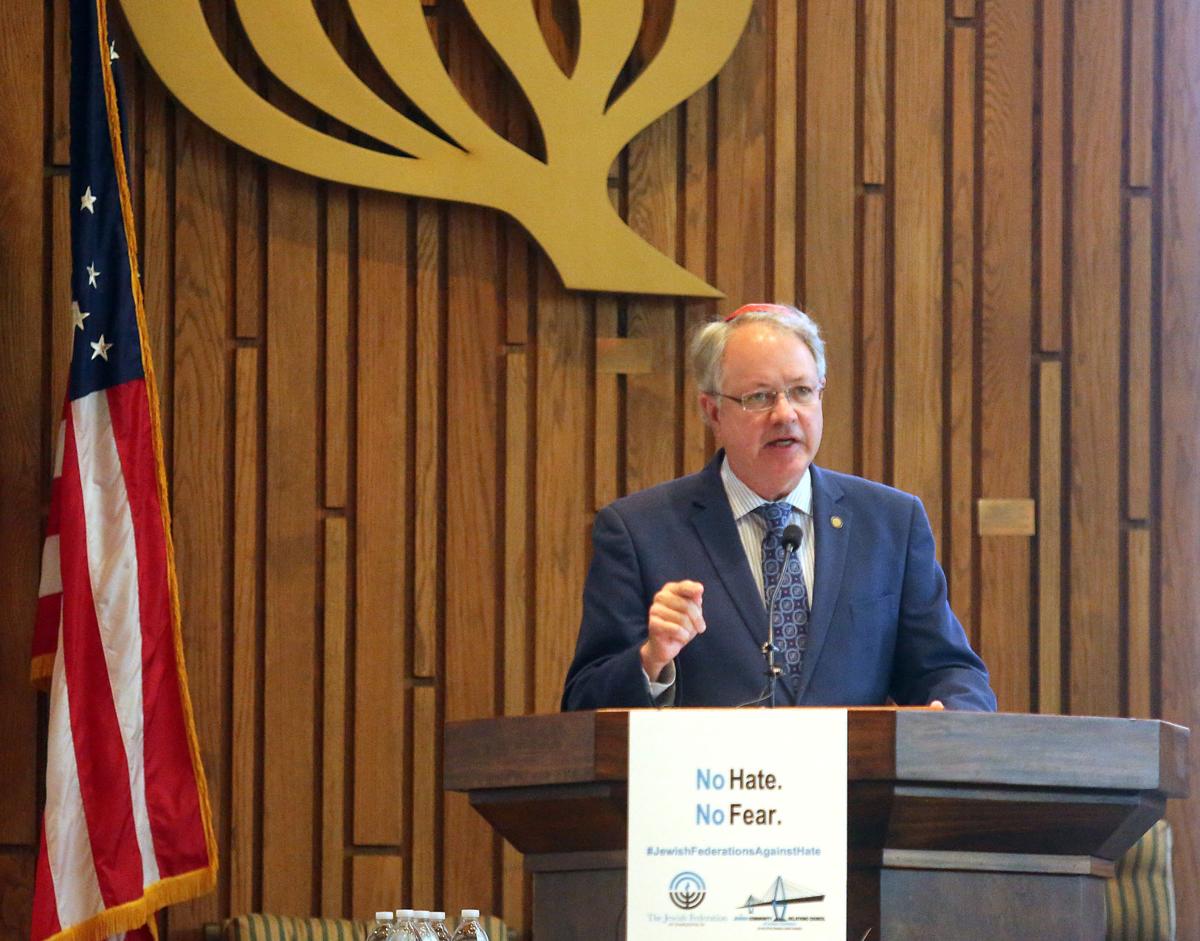 Charleston Mayor John Tecklenburg speaks on Charleston's hate crime ordinance during the “No Hate, No Fear Solidarity Rally” held Sunday, Jan. 12 at Synagogue Emanu-El. The Charleston Jewish Federation and the Jewish Community Relations Council of Greater Charleston coordinated the event in response to the recent epidemic of anti-Semitic harassment and violence in New York and elsewhere. Brad Nettles/Staff 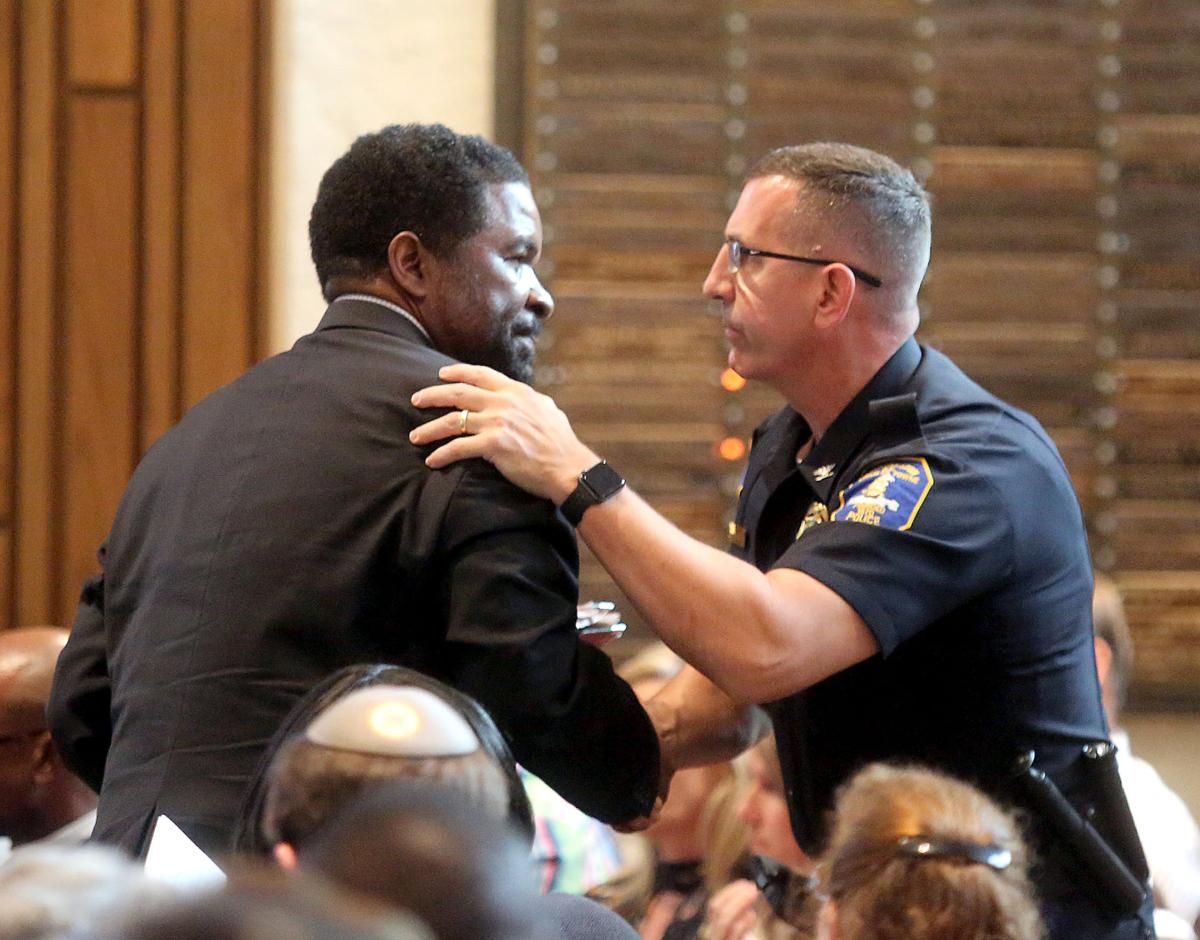 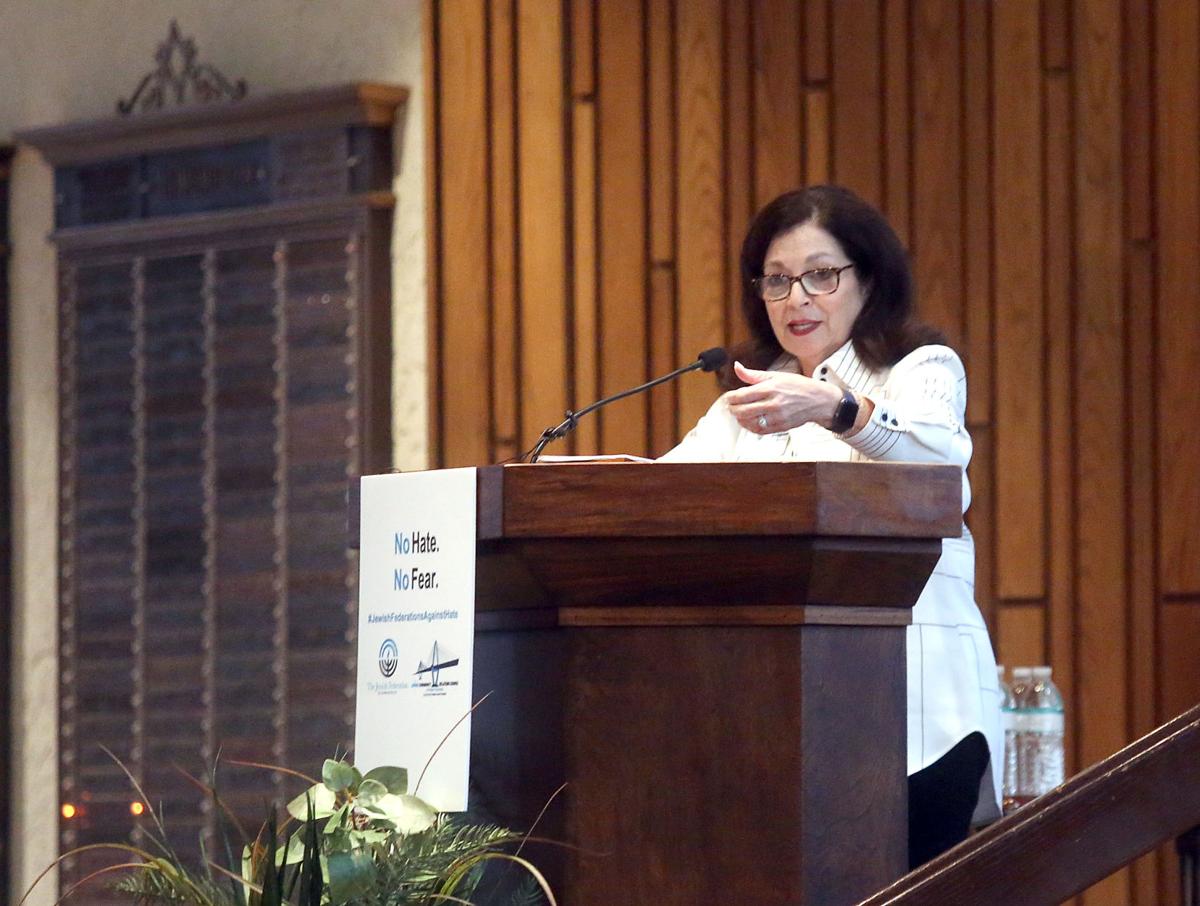 Community leader Anita Zucker speaks on the role of education during the “No Hate, No Fear Solidarity Rally” held Sunday, Jan. 12 at Synagogue Emanu-El.  Brad Nettles/Staff

On Sunday evening, the local Jewish community, joined by other religious and political leaders, said enough was enough — not just to a recent increase in anti-Semitic attacks, but to South Carolina's status as one of just four states without hate crime legislation.

The "No Hate, No Fear Solidarity Rally," organized by the Charleston Jewish Federation and the Jewish Community Relations Council of Greater Charleston, responded to recent violence and harassment against the Jewish community.

On Dec. 28, a man wielding a machete burst into a rabbi's home in Monsey, N.Y., and stabbed several Hasidic Jews who were celebrating Hanukkah.

"Perhaps the Jewish nation is threatened by those who think the worst of us. Let us respond by showing them the very best of us," said Adam Rosenbaum, the rabbi of Synagogue Emanu-El, where the rally was held. Nearly every seat in the room was filled, with many standing in the back.

Eileen Chepenik, president of the Charleston Jewish Federation, said they'd received many calls from those filled with a deep anxiety about what could be done to stem the growing harassment.

She identified three pillars of their ongoing response: a focus on security, legislation and education.

Chepenik, like many other speakers of the night, emphasized the importance of remembering and teaching the Jewish community's past. She recognized Joe Engel, a survivor of the Auschwitz concentration camp who was in the audience.

Anita Zucker, whose parents were Holocaust survivors, described just how crucial that education can be. She shared that one day, when she was speaking to a group of elementary students about the Holocaust, a 10-year-old boy asked her, "What makes you believe it was the Nazis who did this?"

"I was shocked," Zucker said. She wondered who had taught the boy to think like that.

During the rally, speakers identified a priority: passing legislation against hate crimes on the state level. State Rep. Wendell Gilliard, D-Charleston, shared that for many years he has tried to pass H. 3063, a bill that would provide penalties for those convicted of a crime intended to assault, intimidate or threaten a person based on their affiliation with a specific community.

The bill has yet to pass, he said, making South Carolina one of four states in the nation without legislation against hate crimes. Federal law isn't sufficient, Gilliard said.

"We recognize that we won't be able to eliminate hate from everyone's heart," Gilliard said, but he hopes to show that "we here in South Carolina are not turning a deaf ear to these types of crimes."

The city of Charleston does have an ordinance against hate crimes, Mayor John Tecklenburg told rally attendees. It's the only city in South Carolina to have that kind of legislation on the books, he said. According to the ordinance, hate intimidation can be punished by a fine no more than $500 and a jail sentence not exceeding 30 days.

"We know that passing laws will shape attitudes," Solicitor Scarlett Wilson of the 9th Circuit said.

"Hate crimes are message crimes. It's not all about the act, it's about the message that's meant to be sent," Wilson said. "We need to have a message of our own to send."

State Sen. Sandy Senn, R-Charleston, said she has also worked to pass laws that could prevent hate crimes. S. 276, which would make it illegal to threaten a place of public gathering, also has yet to pass.

For many, the specter of intolerance-fueled attacks was a reminder of the nine African Americans killed at Charleston's Emanuel AME Church in 2015.

"We're not immune from hate in Charleston," Luther Reynolds, the city of Charleston's police chief, said. "It's time to get this across the finish line. Being one of four states without hate crime legislation is unacceptable."

Review: The diaries of Milton Gendel illuminate a cultivated life and quick mind

Last Sunday was Sanctity of Life Sunday, a day proclaimed by President Ronald Reagan in 1984. And it was a hard subject to preach in my new church. Read moreNorris Burkes: Life is complicated

Gardening column: It's alive! Soil that is...

One of the most common questions in landscaping and gardening is what good soil is and where to buy it. But this is one of those questions that can be misleading as there may be plenty of products labeled as good soil but, in reality, the product purchased at the store is essentially the starting material, not the final product. This is because good soil is not bought but grown and cultivated. Read moreGardening column: It's alive! Soil that is...