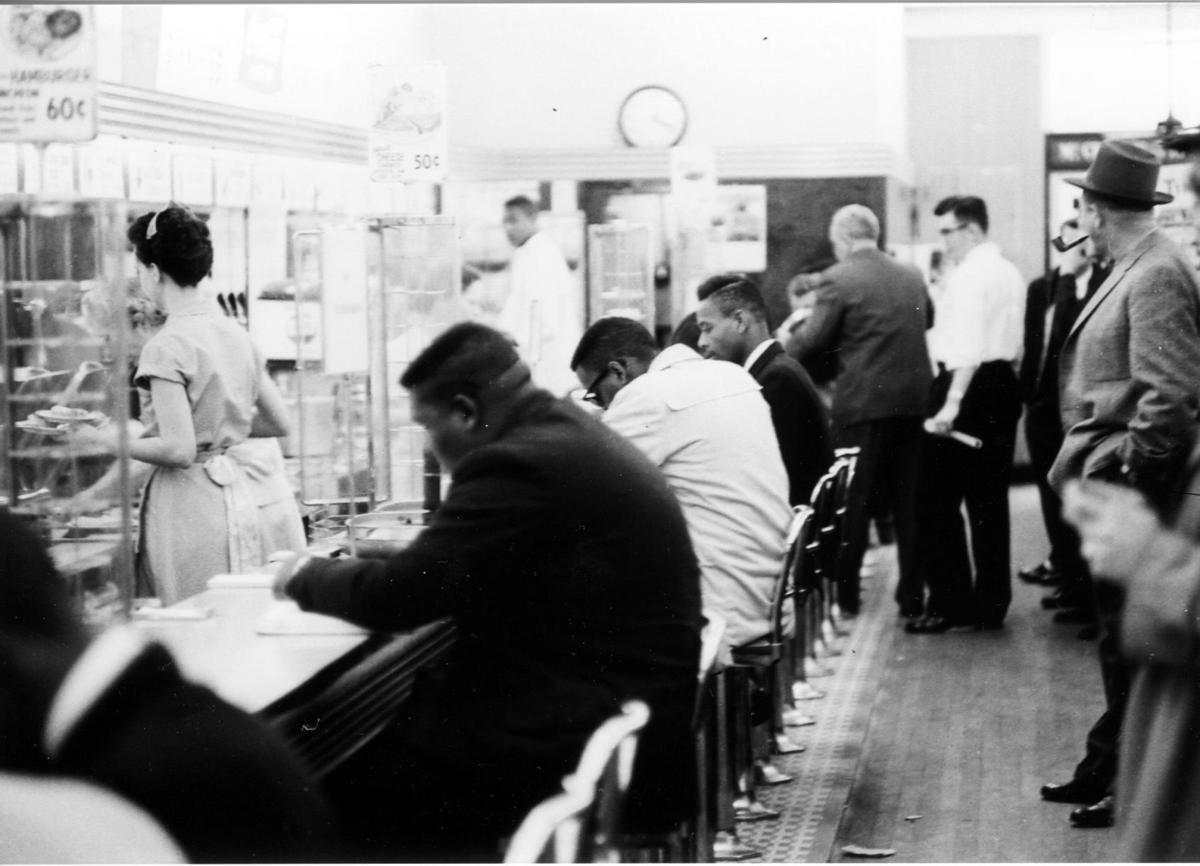 This February 1960 file photo shows people, who became known as the "Friendship Nine," taking part in a civil rights “sit-in” protest at the lunch counter in McCrory’s in Rock Hill. 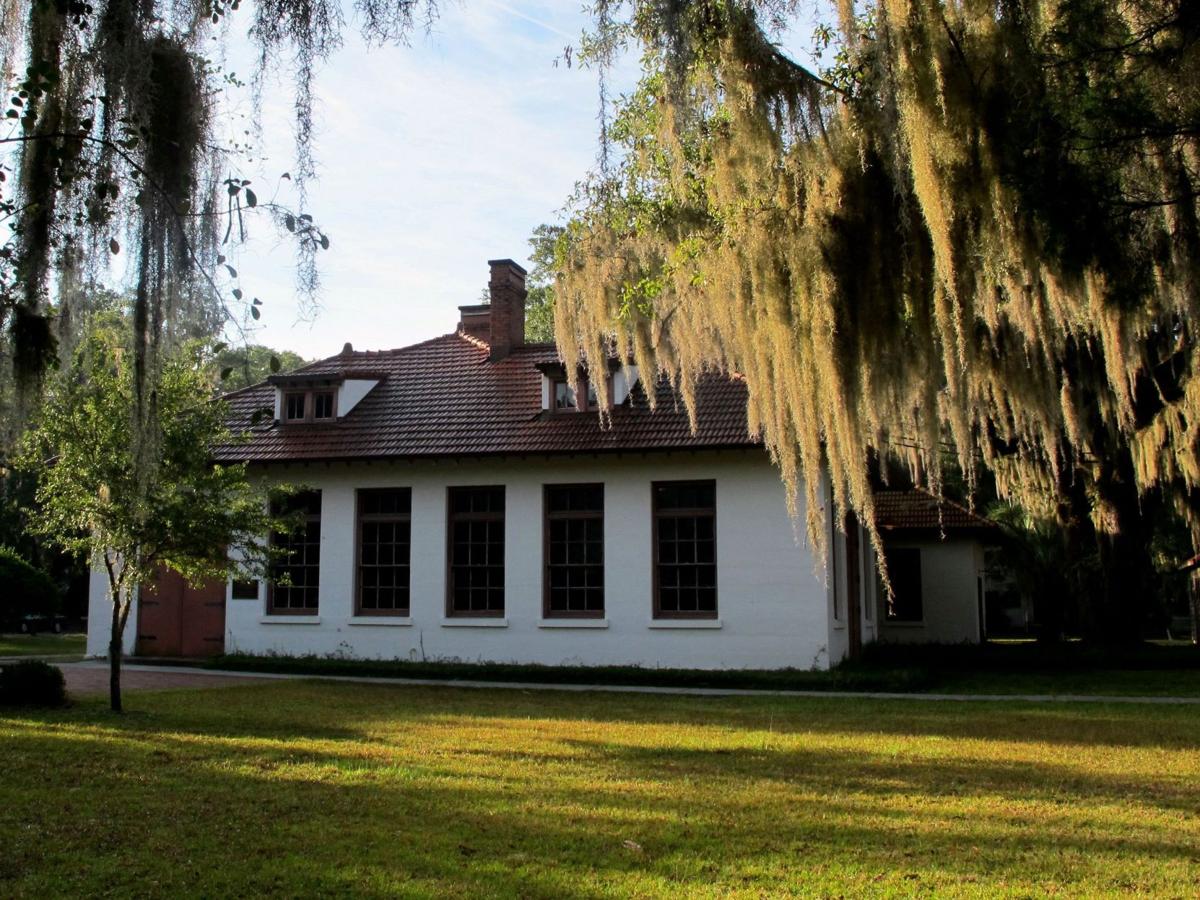 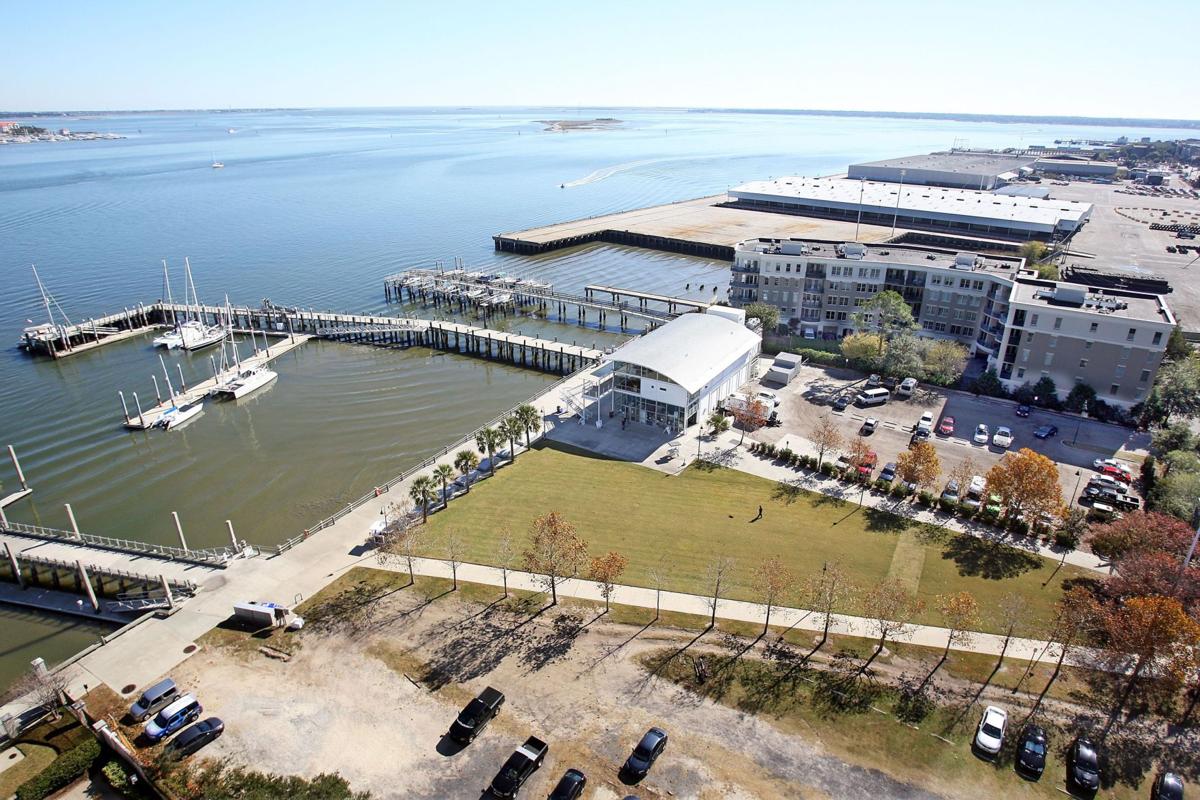 The "sacred site" of Charleston's planned International African American Museum, the place where many enslaved Africans disembarked, was Gadsden's Wharf. 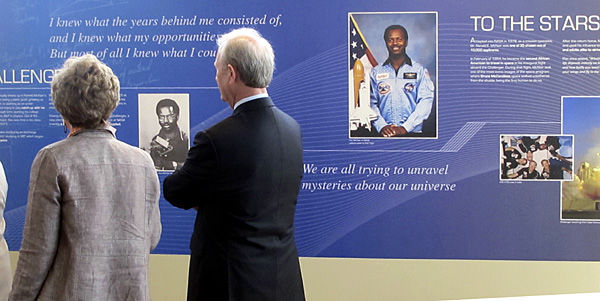 Visitors view exhibits at the Ronald McNair Life History Center in Lake City, S.C., after the center was dedicated on Monday, March 21, 2011. McNair died when the space shuttle Challenger exploded. 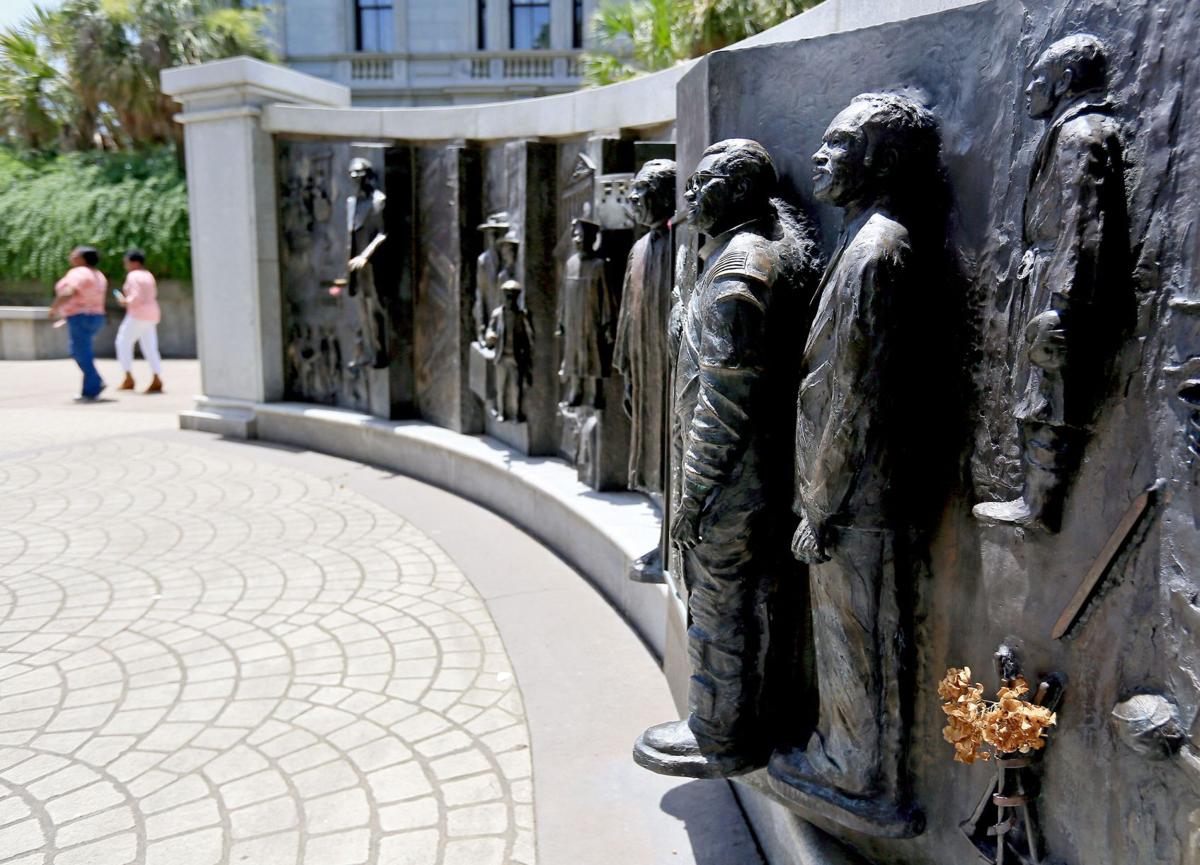 The African-American History Monument sits on the grounds of the Statehouse in Columbia. (File/Staff)

This February 1960 file photo shows people, who became known as the "Friendship Nine," taking part in a civil rights “sit-in” protest at the lunch counter in McCrory’s in Rock Hill.

The "sacred site" of Charleston's planned International African American Museum, the place where many enslaved Africans disembarked, was Gadsden's Wharf.

Visitors view exhibits at the Ronald McNair Life History Center in Lake City, S.C., after the center was dedicated on Monday, March 21, 2011. McNair died when the space shuttle Challenger exploded.

The African-American History Monument sits on the grounds of the Statehouse in Columbia. (File/Staff)

Many — perhaps most — African Americans can trace family roots back to Charleston. About 40 percent of enslaved Africans brought to North America arrived on ships that docked in Charleston Harbor.

Slaves then were sold to plantation owners throughout the Antebellum South. During the “Great Migration,” about 6 million blacks moved from the South to the Northeast, Midwest and West between 1916 and 1970, chastened by the ghosts of their oppressed ancestors and motivated by the prospect of a better life.

On the cusp of the Civil War, the U.S. was home to 4 million slaves, 400,000 of whom lived in South Carolina. Their labor created enormous wealth for white rice and cotton planters, and it built whole cities, including Charleston.

Now, 50 years since the death of Martin Luther King Jr., the South Carolina African American Heritage Commission has named 10 top black history sites to visit in the state, including several associated with King and the civil rights movement. The commission also has compiled a much larger list of about 300 sites for its new online travel guide, Green Book of South Carolina (www.GreenBookofSC.com).

Dawn Dawson-House, an ex officio board member who works for the S.C. Department of Parks, Recreation and Tourism, said the initiative is meant to raise awareness of black history and to assist the commission’s efforts to identify, preserve, mark and protect the state’s many sites connected to black history and heritage.

Charleston has a disproportionate number of black history sites compared with other parts of the state, largely because the harbor was a main …

“In the past 24 years, more than 200 markers have been added to the official state markers program,” Dawson-House said. “When the commission started, there were only about 35 markers dedicated to black history.”

She said historical sites can be found throughout the state, and many local people know about the ones near them.

“No matter where you are in South Carolina, there is an important African-American heritage element or place to visit,” Dawson-House said. “But the entire story is not told collectively. It’s told in bits and pieces in everybody’s community. At the commission we’ve decided we have to pull together an entire portrait of this history.”

Michael Allen, a founding board member of the commission, said the Green Book — “a manifestation of out 24-year journey” meant to assist anyone interested in black history — is a reference to the Jim Crow-era guide that African Americans used when traveling through the South.

The old guide provided information about black-owned businesses (gas stations, hotels, restaurants, hospitals) that were safe for black travelers during the period of legal segregation.

“When you went traveling some place, you cooked your food, packed your food, the food was in your car,” Allen said. “You planned visits according to where relatives lived, or drove straight to where you needed to be.”

The modern iteration of the Green Book, instead, is meant for everybody, Allen said.

“We think this is a great opportunity to connect the community, the history, the legacy and the African American experience of South Carolinians and the traveling public,” he said.

This year, for the first time, the commission is highlighting a handful of sites, even as it continues to collect information about other places in the state that deserve an historical marker, especially sites associated with the Reconstruction period, 1865-1877, during which blacks suddenly achieved remarkable successes after centuries of oppression.

1. Penn Center (St. Helena Island, near Beaufort). The Penn School, founded in 1862 by missionaries and abolitionists, is dedicated to the preservation and interpretation of sea island culture. It served as a retreat for Martin Luther King Jr. in the 1960s. In January 2017, the center was named the nation’s first Reconstruction Era National Monument by President Barack Obama.

3. Atlantic Beach (near North Myrtle Beach). Atlantic Beach, a black-owned and governed oceanfront community, was established around 1934 as a destination for blacks denied access to other beaches because of segregation laws. The area, which included hotels, restaurants and clubs, once flourished, but desegregation triggered its decline in the 1970s.

4. Ronald E. McNair Life History Center (Lake City). Opened in 2011, the Ronald E. McNair Life History Center pays tribute to the Lake City-born astronaut and physicist who died in the 1986 Challenger Space Shuttle explosion. McNair pioneered laser technology, and he was an accomplished saxophonist. His grave and monument are located next to the museum.

5. Liberty Hill AME Church and Summerton High School (Clarendon County). Meetings held at Liberty Hill AME Church in the 1940s and 1950s led to local court cases that helped bring about the U.S. Supreme Court’s landmark Brown v. Board of Education ruling in 1954, which declared segregation unconstitutional. Nineteen members of this congregation were plaintiffs in the Briggs v. Elliott case, heard in U.S. District Court in Charleston in 1952. It was J. Waties Waring’s dissenting opinion in that case that set the stage for Brown v. Board.

6. South Carolina State House and African American Monument (Columbia). A monument to African Americans was installed on the grounds as part of a compromise to remove the Confederate battle flag from the State House dome. The monument conveys the story of blacks in South Carolina, from their arrival as slaves to their later successes in science, the arts, law, education, sports and politics. A Main Street self-guided civil rights tour highlights important events in Columbia, from drugstore sit-ins to the removal of Sarah Mae Flemming from a city bus in June 1954.

7. Redcliffe Plantation State Historic Site (near Aiken). Redcliffe Plantation interprets the history of the Henleys, Goodwins and Wigfalls, families who were enslaved at properties owned by South Carolina Governor James Henry Hammond, or who worked as sharecroppers or paid employees from 1831 to 1875.

8. Benjamin E. Mays Birthplace (near Greenwood). Dr. Benjamin E. Mays (1894-1984) was a Baptist minister, college president, author and civil rights pioneer. He was the eighth child of Hezekiah and Louvenia Mays, both born into slavery. Benjamin Mays, a strong opponent of segregation, was best known as president of Morehouse College in Atlanta (1940-1967). Martin Luther King Jr. described him as a “spiritual mentor.” Mays’ memoir “Born To Rebel: An Autobiography” (1971) is a civil rights classic. The house was moved to its current location and dedicated as a museum in 2011.

9. Springfield Baptist Church (Greenville). Springfield, the oldest black Baptist congregation in downtown Greenville, was founded in 1867 by 65 freed slaves and four deacons who had been members of Greenville Baptist Church (now First Baptist Church). Springfield Baptist Church was headquarters for nonviolent civil rights protests in the 1960s. On Jan. 1, 1960, a peaceful protest march began at the church and continued to the Greenville Downtown Airport. The march was organized after the keynote speaker for a state NAACP convention, Jackie Robinson, the first black Major League Baseball player, was denied use of the airport’s waiting room. The church burned in 1972 and was replaced by the present building in 1976.

10. McCrory's Five & Dime (Rock Hill). This historic marker stands in front of McCrory’s Five & Dime where, on Feb. 12, 1960, black students from Friendship Junior College in Rock Hill were denied service at the lunch counter but refused to leave. On Jan. 31, 1961, 10 students from Friendship Junior College were arrested when they refused to leave McCrory’s. Nine would not pay their fines and became the first civil rights sit-in protesters in the nation to serve jail time. This new “Jail No Bail” strategy by the “Friendship Nine” was soon adopted as the model strategy for the Freedom Rides of 1961.