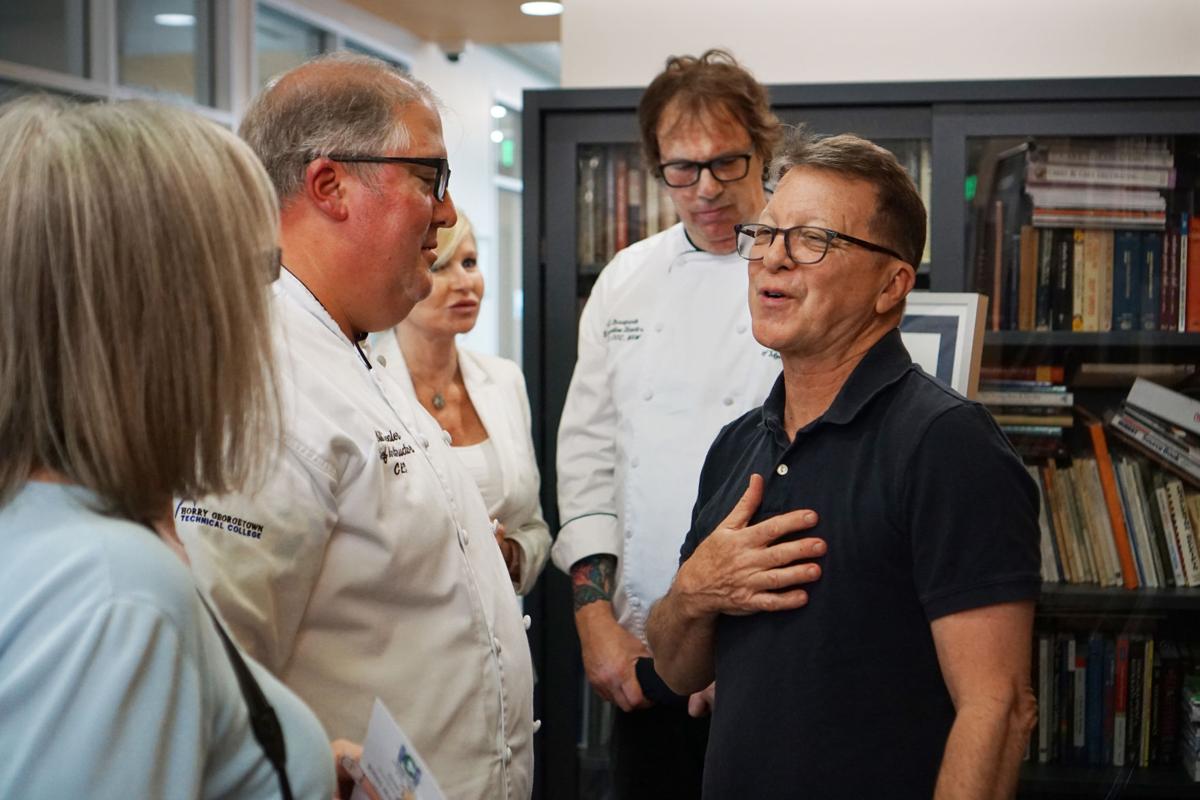 Bill Twaler (left), an instructor at ICI in Myrtle Beach, was a protege of John Martin Taylor (right) since Twaler's days in Charleston as a Johnson & Wales student. Stephanie Barna/Staff 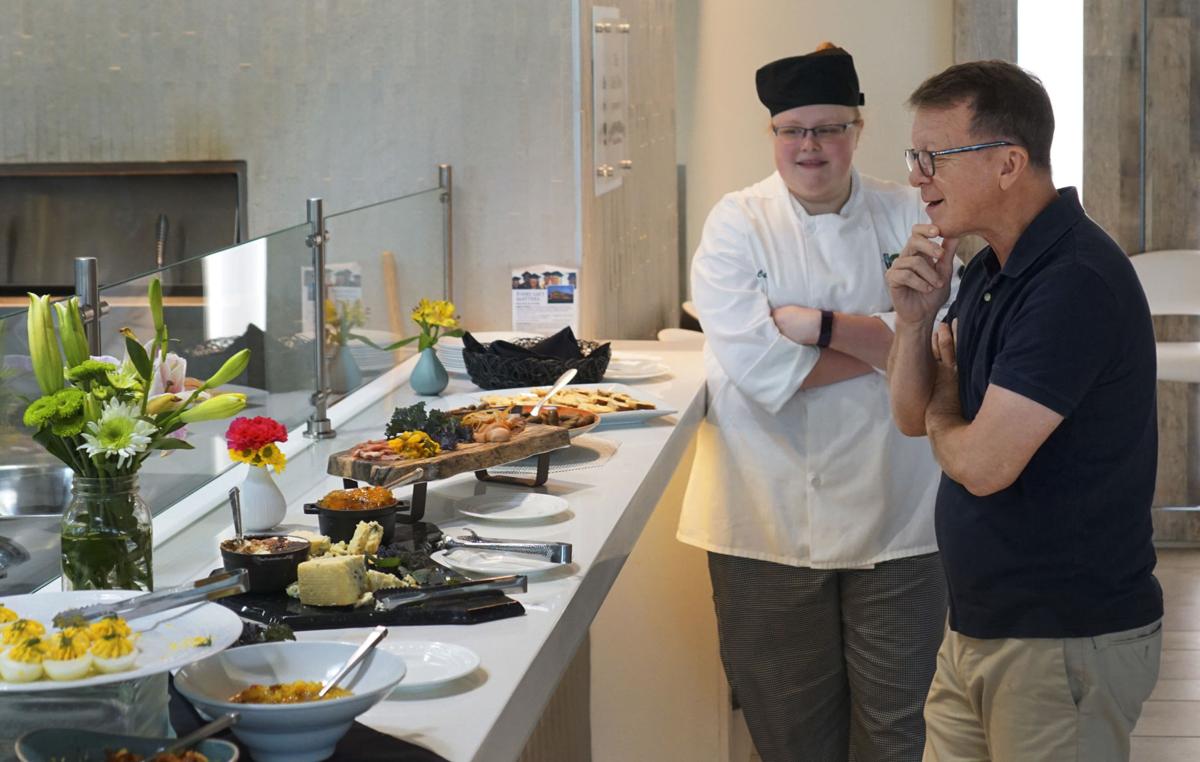 The International Culinary Institute in Myrtle Beach recreated a menu of John Martin Taylor's for a luncheon to mark the dedication of his cookbook collection, which he donated to the school. Stephanie Barna/Staff 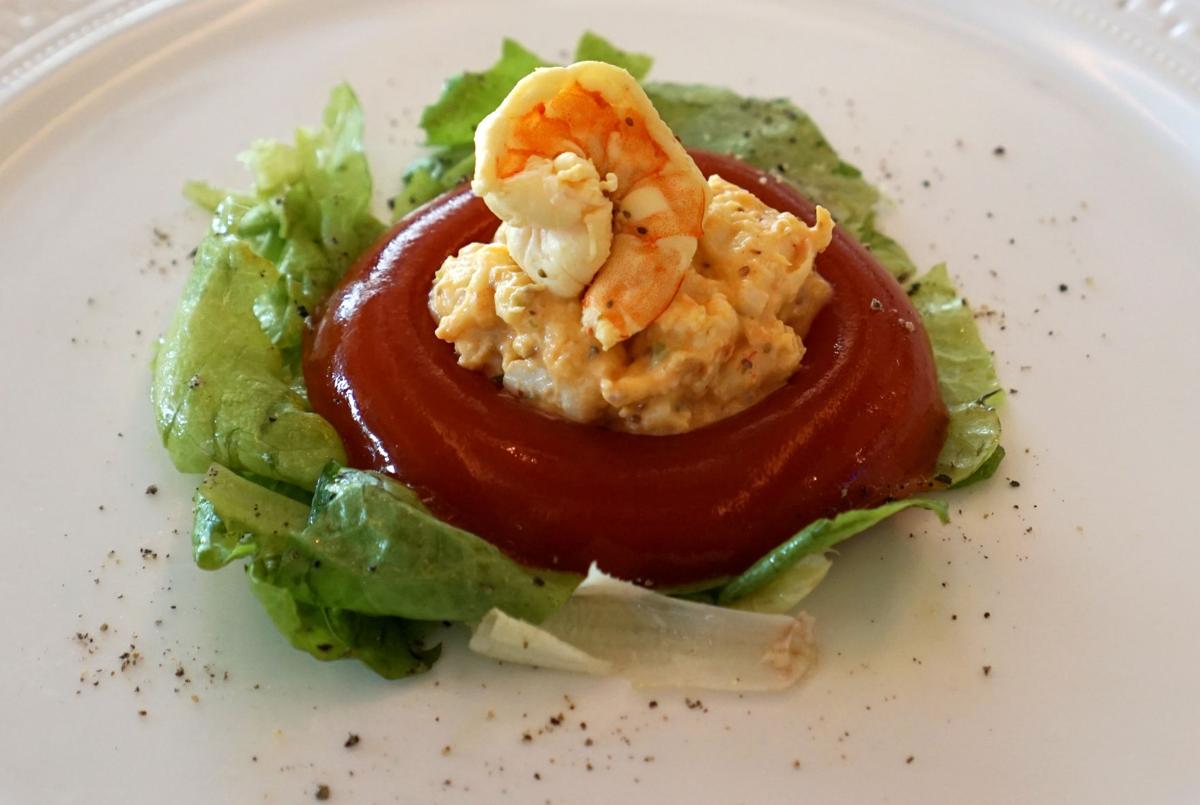 Tomato aspic is a quirky ladies luncheon dish from the 1950s that John Martin Taylor likes to trot out on occasion because everyone ends up loving it. Stephanie Barna/Staff 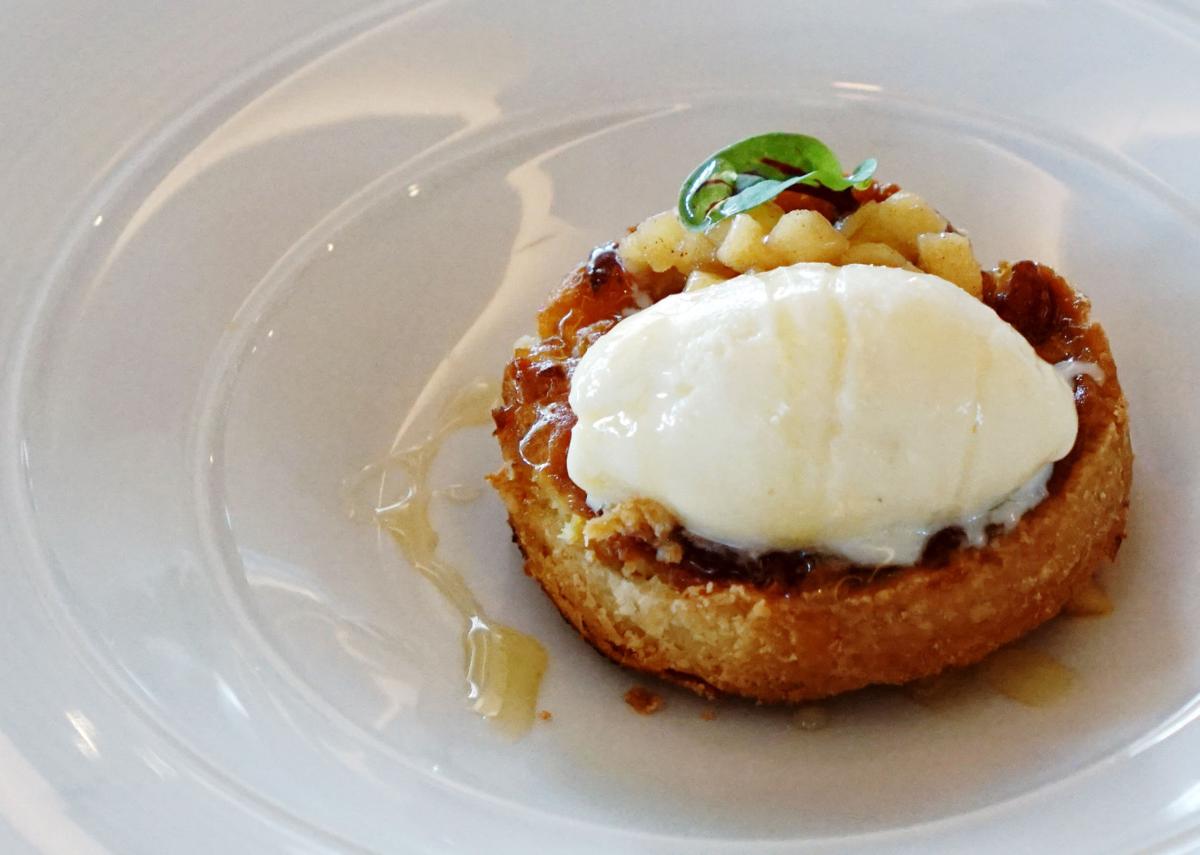 One of Taylor's significant contributions to Lowcountry food history is discovering that Huguenot Torte is not a Charleston dish but comes from the Midwest, where it was known as Ozark Pudding.  Stephanie Barna/Staff 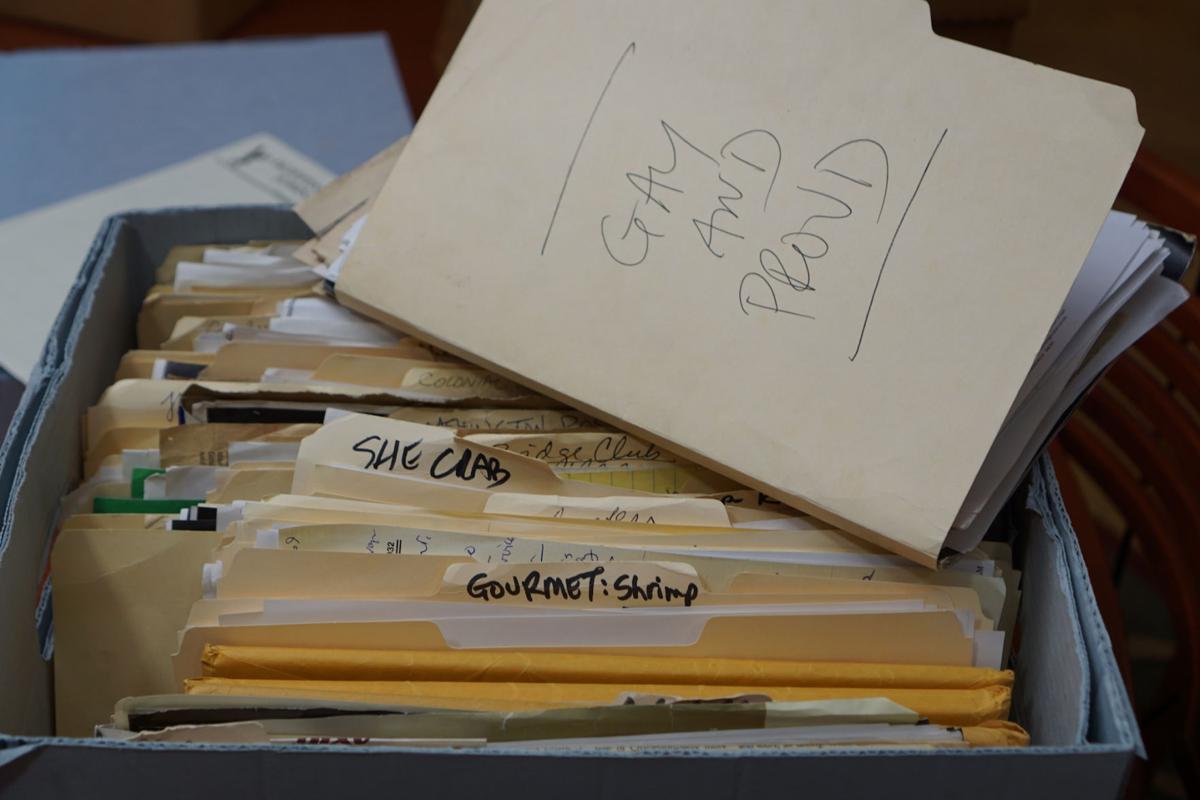 A box of files shows the diverse and passionate interests of John Martin Taylor, who documented everything. Staff/Stephanie Barna

Bill Twaler (left), an instructor at ICI in Myrtle Beach, was a protege of John Martin Taylor (right) since Twaler's days in Charleston as a Johnson & Wales student. Stephanie Barna/Staff

The International Culinary Institute in Myrtle Beach recreated a menu of John Martin Taylor's for a luncheon to mark the dedication of his cookbook collection, which he donated to the school. Stephanie Barna/Staff

Tomato aspic is a quirky ladies luncheon dish from the 1950s that John Martin Taylor likes to trot out on occasion because everyone ends up loving it. Stephanie Barna/Staff

One of Taylor's significant contributions to Lowcountry food history is discovering that Huguenot Torte is not a Charleston dish but comes from the Midwest, where it was known as Ozark Pudding.  Stephanie Barna/Staff

A box of files shows the diverse and passionate interests of John Martin Taylor, who documented everything. Staff/Stephanie Barna

On the third floor of the Addlestone Library at the College of Charleston, archivist Harlan Greene has a bunch of beat-up bankers boxes sitting next to his desk. They're full of treasures, gifted to the school from John Martin Taylor, aka Hoppin’ John, the renowned cookbook author who ran a bookshop in Charleston from 1986 until 1999.

In the boxes are sketchbooks and photographs, handmade postcards from artist friends, and a pink rubber hot water bottle that had been stamped and addressed to Taylor and sent through the U.S. Postal Service, just to see if it would get to him. One box is stuffed with manila folders with labels that show his range of interests, from "Gay Stuff” to “She Crab Soup.” In the folders are hand-scrawled research notes, copies of typed letters he sent to the editor of this newspaper, hate mail he got from other readers who disagreed with him, clipped articles of interest, and pretty much any correspondence of any significance, including a salty back and forth with his sister after he wrote a column about being gay in a Charleston weekly newspaper.

The archive will be part of the LGBTQ collection at the college, which recently received a $200,000 grant from the Donnelley Foundation for preserving the at-risk legacy of local gay history. Taylor's papers join those of Linda Ketner, an openly gay woman who ran for Congress in 2008, along with realtor and activist Charlie Smith and groups such as Alliance for Full Acceptance and the Metropolitan Community Church. Greene says the grant will enable them to hire an archivist to catalog these collections so they can be accessed for research purposes.

Archiving, says Greene, is somewhat of a guessing game. "You have to ask, 'What are people in the future going to be interested in?"

He thinks Taylor's papers have an abundance of potential. "He covered this timeline and hit so many things that are fascinating on a number of levels," Greene says. "He traveled in so many circles and had a habit of documenting it. He went to all the right parties. He knew the blue bloods, the grande dames and the drag queens."

While Taylor lived openly gay in Charleston, Greene says that was just one facet of his life: "He was so matter of fact about his gayness."

Greene now has the papers, manuscripts, photographs, letters, articles, journals and sketchbooks of a man who has lived a big, varied, open life, whether it was his college years in Athens, Ga., where he was part of a vibrant artistic community that included the B-52s, or the years in Charleston where he became Hoppin’ John Taylor, an integral voice in the Southern food movement with his eponymous cookbook store and his critically acclaimed cookbook, “Hoppin’ John’s Lowcountry Cooking.”

Today, Taylor is a spry and boyish 68-year-old, who seems much too youthful and dynamic to already be donating his life’s work to various institutions. But as he told guests assembled at a luncheon in Myrtle Beach honoring the gift of his cookbook collection to the culinary school there: “Lest you think that I am magnanimous, the bigger truth is that after three and a half years of living mostly apart from Mikel, my husband, he is home now and he needed office space, so it’s mostly me downsizing to make room for him.”

Taylor and his husband live in a mid-century modern house in Savannah. Downsizing meant not only getting rid of his papers but paring his cookbook collection down to the essentials. His cookbook store was said to have 10,000 books, and he inherited more than a thousand cookbooks from his mother when she passed. He's spent a lifetime building this collection, donating some along the way. He gave the Charleston County Library many books when he closed his shop in 1999. But he kept plenty, too.

Then it got unwieldy and his husband needed room in their home office, so Taylor started looking around to find it a permanent home. Somewhere that other cooks could access the books and make use of them, as he had done over the years. Unfortunately, the Culinary Institute of Charleston at Trident Tech would have just added the cookbooks to the library’s general collection, so he decided CIC wasn’t a good option.

The International Culinary Institute of Myrtle Beach, on the other hand, seemed a great fit. Not only would the school keep the books in a special spot where the students could access them at any time, but one of his former proteges was a teacher there. Bill Twaler was a student at Johnson & Wales' Charleston campus when Taylor had his store. As an eager young cook who wasn't from the South, he felt like he needed to dig into the place where he was learning to cook, and Taylor offered him his store. "He told me it could be my library," remembered Twaler, who spent hours reading, researching and learning about Southern food and culture from Taylor.

Taylor described the collection at the dedication: "You won't find better technical instructions than those in the Time Life Good Cook series, of which there are 30 volumes. There's a lot of Italian and a lot of French on these shelves, including a signed copy of Paul Bocuse and my mother's tattered old 'Larousse Gastronomique.'

"There are books by John Egerton and Maida Heatter and Roger Verge and Paula Wolfert and Patience Gray and George Lang. And if you don't know who they are, then you should. And there are books about Charleston's gardens and architecture, Gullah traditions, history and slavery, because you can't understand the big picture without looking at all of it."

Of course, he kept some treasured books for himself: 200 gardening books, Elizabeth Schneider's volumes on fruits and vegetables, his mentor Karen Hess' books. "Karen all but invented culinary history," he said, "and it is because of her that I became interested in the field." He told about interviewing Hess for an article in a magazine where he worked in 1984 and she encouraged him to return to the Lowcountry and "research its disappearing cuisine."

Which he did to full effect, publishing a definitive cookbook that is still in print more than 20 years later. He also gifted copies of his own books to the culinary school, and noted that when he started his research, he was digging into primary history sources looking for references to food. "History had always been written by white men, in terms of battles and court cases won. When food histories were written, it was by historians who didn't know much about food or they were cooks who didn't know historical methodology."

When he delved into history, he was speaking directly to Greene, who's been documenting the untold and hidden LGBTQ story in Charleston long before receiving a grant to do it formally. As Taylor said, "Before the civil rights movement, which led to the women's movement, the work of African Americans and the work of women were not considered worthy of academic study."

The same is true of gay history. Greene says if a scholar or judge or other person of note was gay, that fact would not have been mentioned or acknowledged.

In Myrtle Beach, as Taylor finished his talk and returned to his seat at the dining table, Taylor passed behind Greene and dropped the notes from his speech into his hand. "It's not everyone who travels with their archivist," Greene said with a laugh, then dutifully tucked the papers into a box back at the library, secure in knowing that this lively talk from an accomplished gay man and a leader in his field would be preserved for future generations.