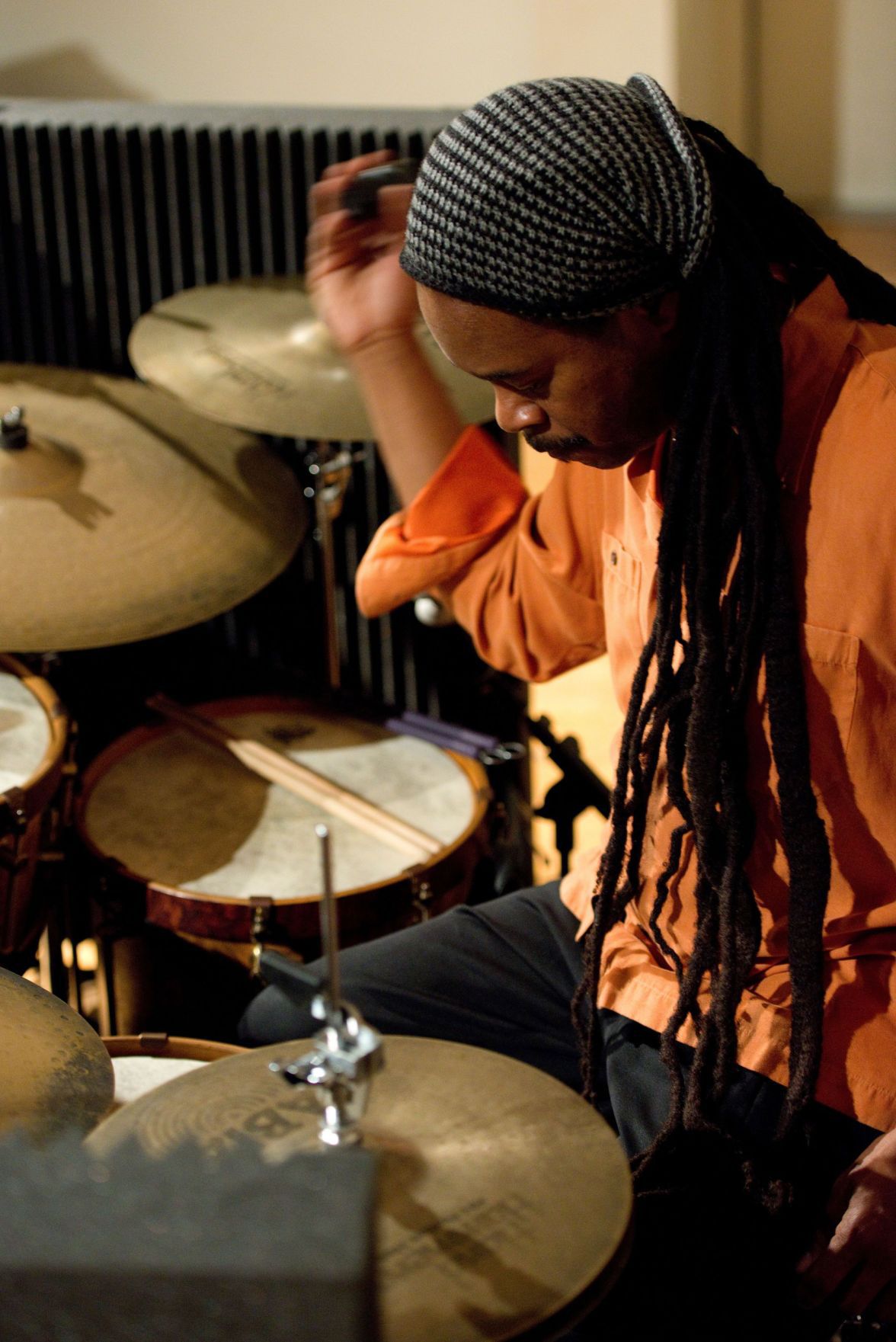 Drummer Quentin Baxter will host of the second installment of "In the Mix" speaker series at the College of Charleston on March 4. 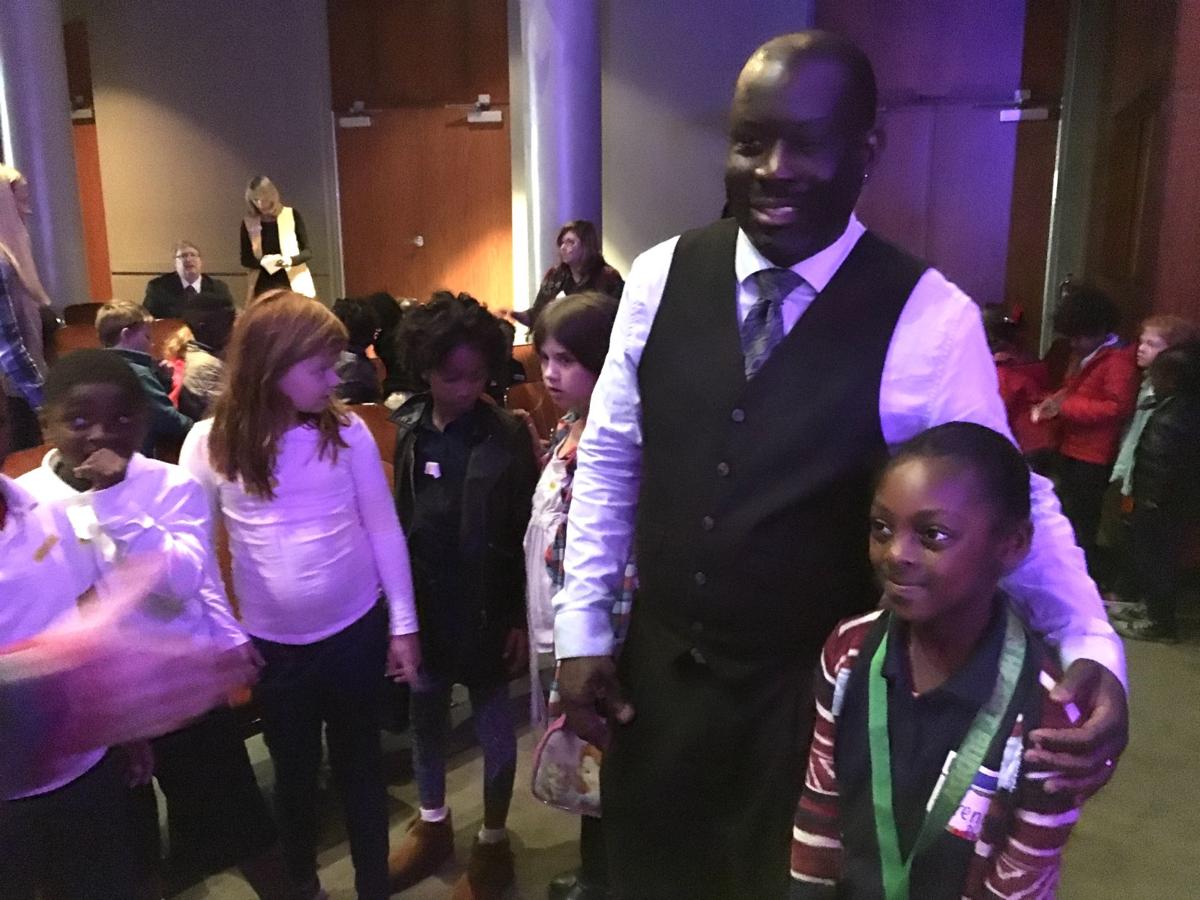 Charlton Singleton, with elementary school students at a 2016 "Jazz Day for Kids," has been commissioned to write a string quartet for The Kronos Learning Repertoire.

Drummer Quentin Baxter will host of the second installment of "In the Mix" speaker series at the College of Charleston on March 4.

Charlton Singleton, with elementary school students at a 2016 "Jazz Day for Kids," has been commissioned to write a string quartet for The Kronos Learning Repertoire.

Drummer Quentin Baxter
takes over 'In the Mix'

Drummer and two-time Grammy nominee Quentin Baxter has joined the Arts Management faculty at the College of Charleston and will serve as the new host of the "In the Mix" speaker series, replacing Artist-in-Residence Emeritus Mark Bryan, who has returned to recording and touring with Hootie and the Blowfish.

The first installment of "In the Mix" is 6:30 p.m. Monday, Feb. 4, in the Simons Center Recital Hall, 54 St. Philip St. The event this time is titled “Epic Women: Industry Journeys of Two Executives at Epic Records" and features a live video conference with Traci Adams and Leah Bekele, who will discuss their careers and their experiences as women in the music industry. This event is free and open to students and the public.

Adams is executive vice president of promotion for Epic Records. Bekele is field national director of promotion and lifestyle. Baxter has taught at the College of Charleston as an adjunct professor of jazz percussion since 1997. In his expanded role with the Arts Management Program, he will be able to share the full breadth of his music industry knowledge and experience with a greater student population and the Charleston community as a whole.

Baxter is CEO of his own music production company, Baxter Music Enterprises, and an active performing and recording artist. He currently tours worldwide with Rene Marie, Freddy Cole and Ranky Tanky.

Magnetic South, a collaborative concert series presented by the College of Charleston Department of Music and the Charleston Symphony Orchestra, will present a contemporary classical music concert featuring two important 20th century works: Stravinsky’s masterpiece "A Soldier’s Tale” in its complete staged version, with College of Charleston faculty members Robert Taylor as narrator and Evan Parry as the devil; along with Lukas Foss’ setting of Wallace Stevens’ "Thirteen Ways of Looking at a Blackbird," featuring soprano Kayleen Sanchez.

Both Khoma and Vynnytsky are from Lviv, Ukraine, and studied at the prestigious Moscow Conservatory. Charleston Music Fest presents intimate chamber music concerts featuring College of Charleston faculty and local and international artists. General admission is $15; students pay $10. Tickets can be purchased online at go.cofc.edu/cmf, by calling 843-953-6315 or at the door.

Trumpeter Charlton Singleton, a fixture of the Charleston music scene, has been named one of 50 composers to receive a commission from the Kronos Quartet/Kronos Performing Arts Association to write a string quartet for The Kronos Learning Repertoire.

Launched in 2015, Kronos' Fifty for the Future is a partnership with Carnegie Hall and others that is commissioning 50 new works — by 25 women and 25 men — expressly for the training of students and emerging professionals. Scores and parts, recordings and other learning materials for 25 of the compositions are available free of charge online at kronosquartet.org/fifty-for-the-future.

Already, composers such as Laurie Anderson, Rhiannon Giddens, Philip Glass, Zakir Hussain and Wu Man have contributed music to the project. As the remaining 25 string quartets and their supporting materials are developed, they will be added to the website throughout the 2020-21 season.

The Kronos Quartet has given more than 450 performances of the 32 pieces that have been debuted thus far. Since the initiative was launched four years ago, Kronos has frequently coached young players on these works, mentoring more than 800 musicians in workshops, coaching sessions and residency activities around the world.

To date, there have been more than 12,000 downloads of the scores and parts in 86 countries and territories.