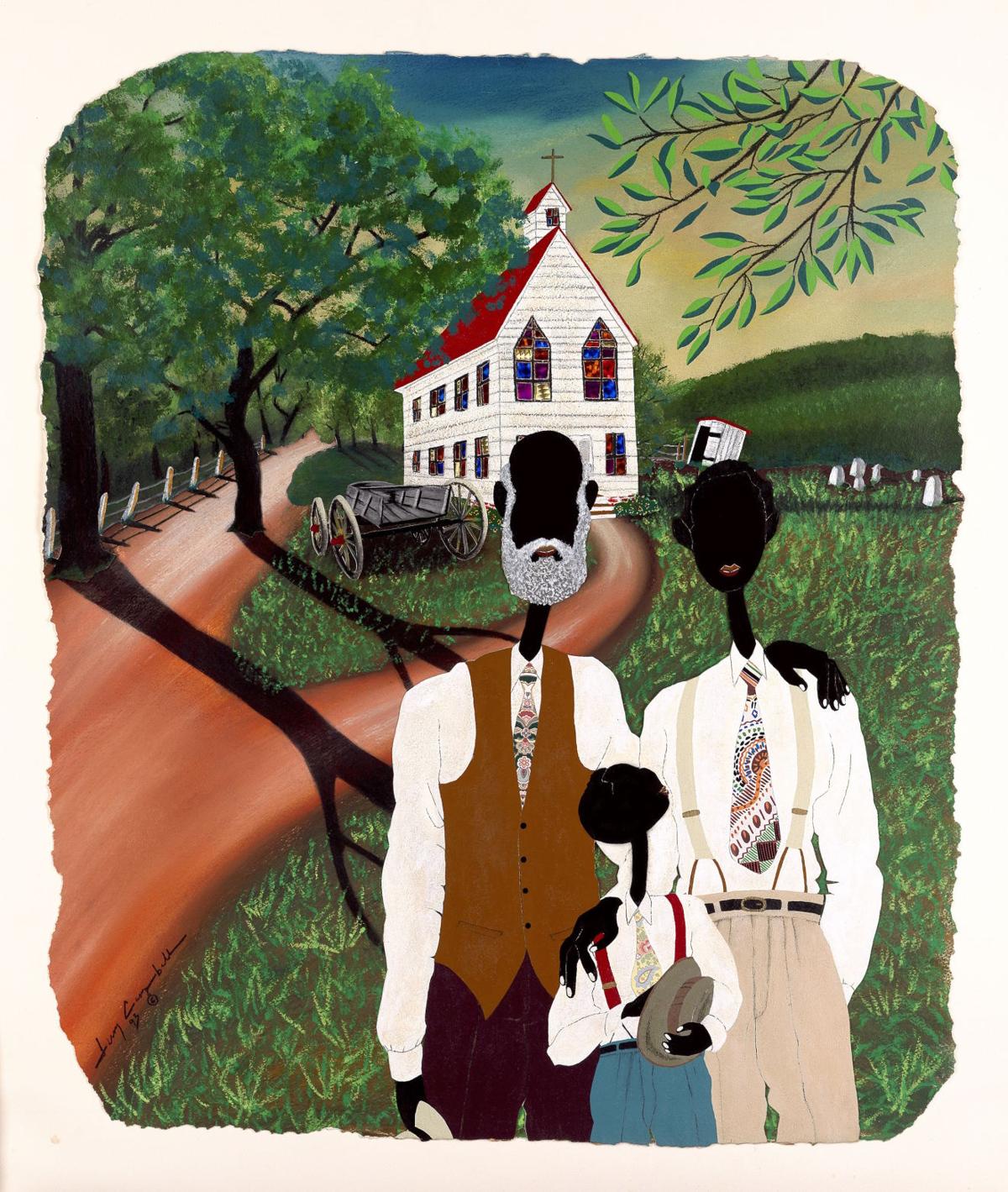 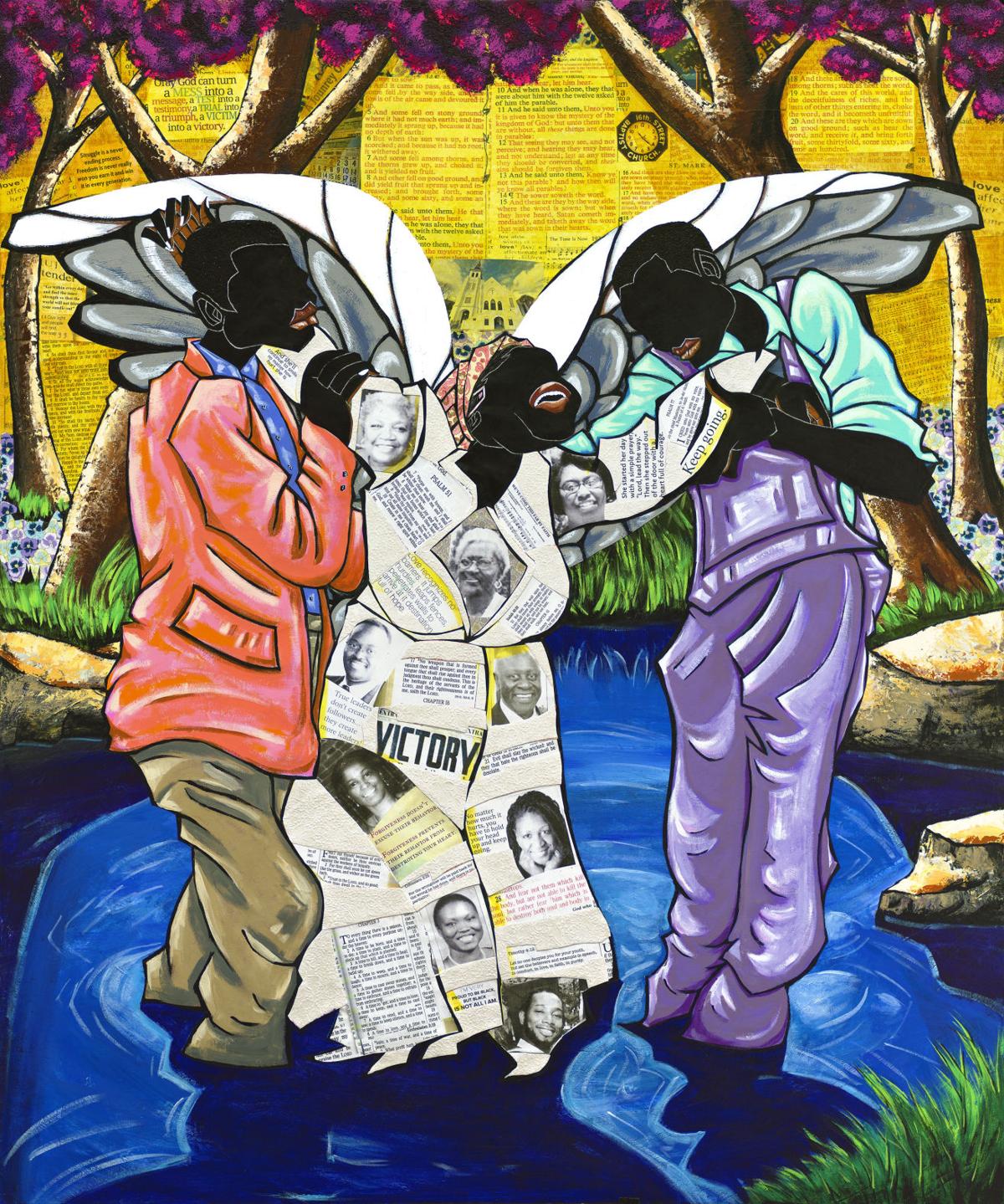 "Bible Study" by Leroy Campbell. He made this painting to honor the victims of the Emanuel AME Church shooting. 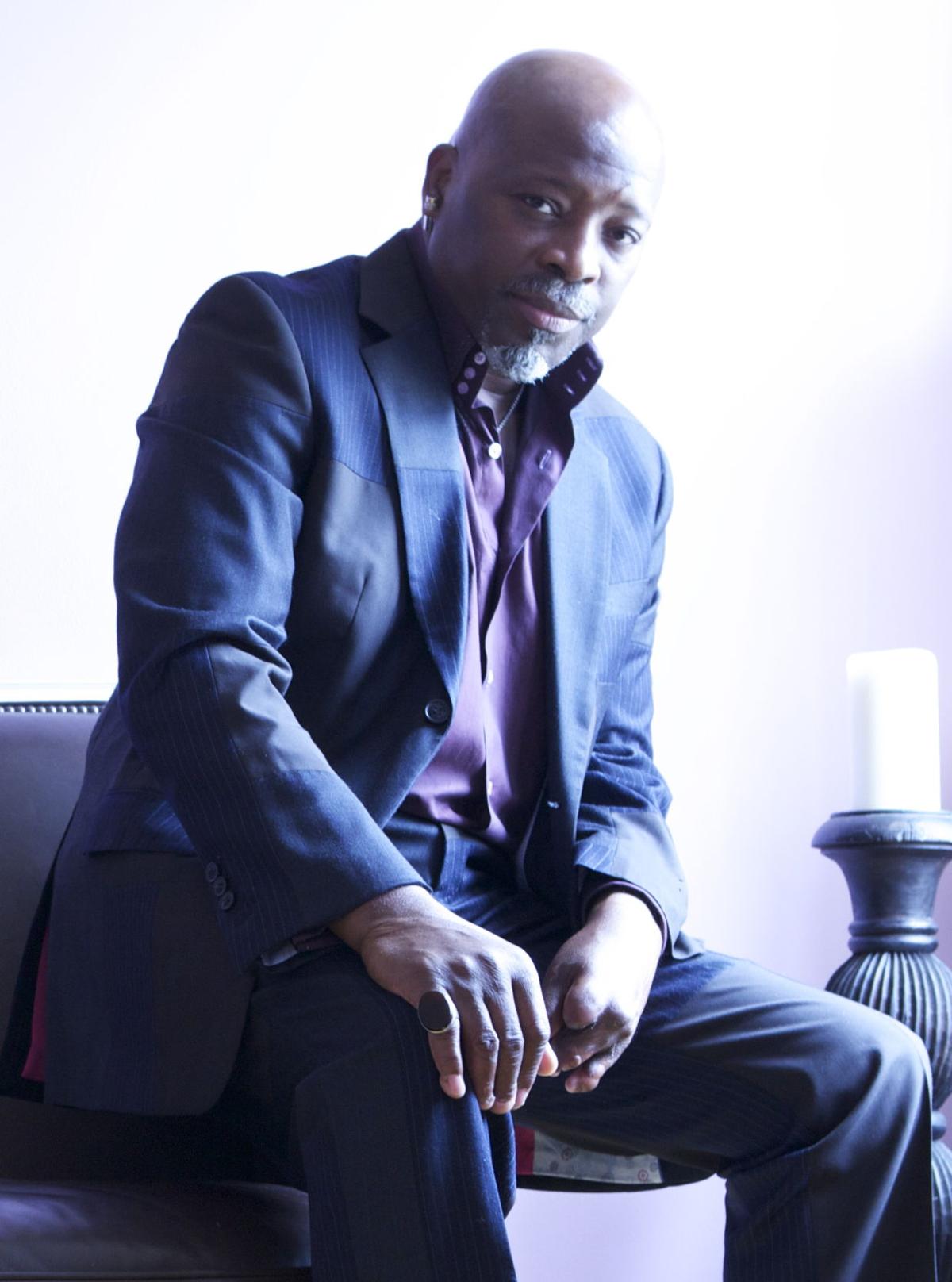 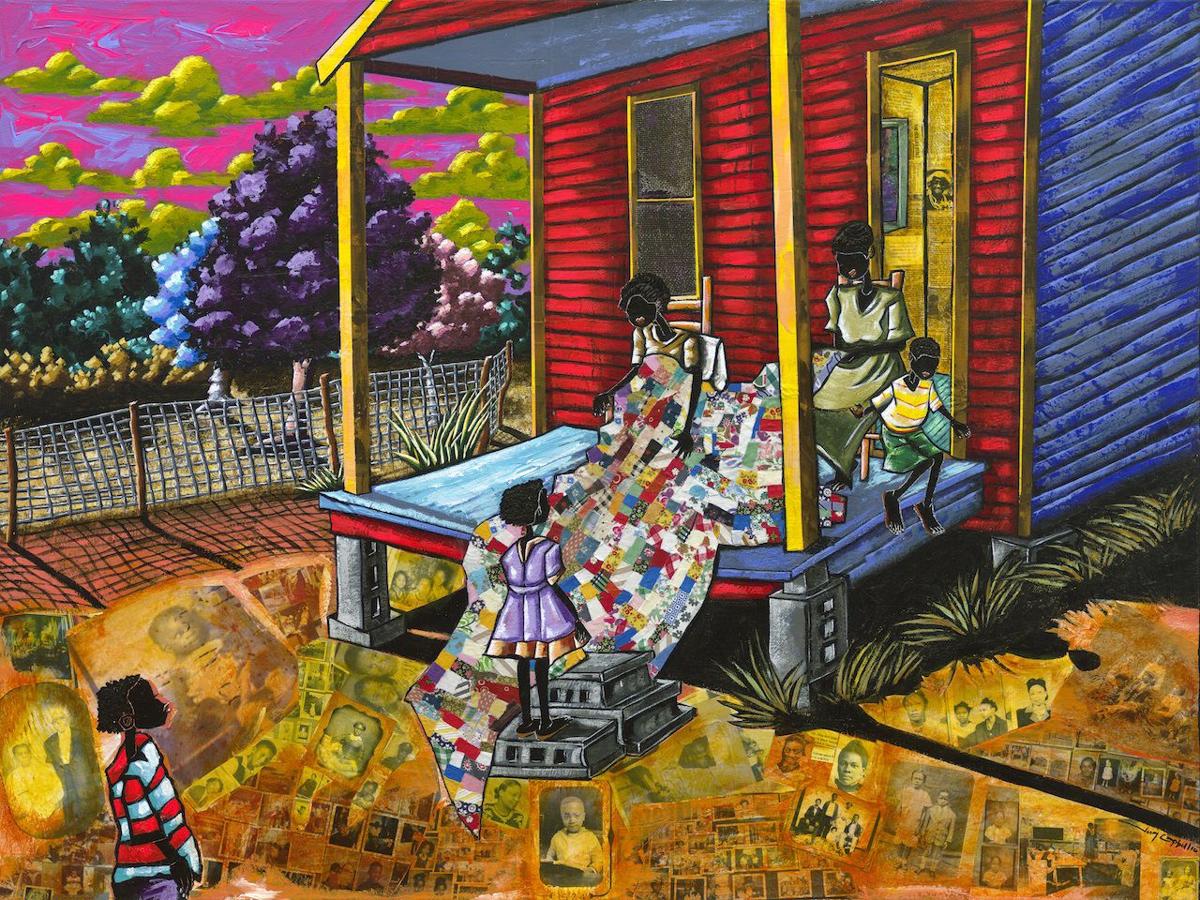 "Bible Study" by Leroy Campbell. He made this painting to honor the victims of the Emanuel AME Church shooting.

As a kid living in the Gadsden Green apartment complex in Charleston, Leroy Campbell retreated into the colorful fantasy realm of comic books. He was safe there.

“As a child, socializing was difficult,” he said. “Some kids would tease me and torment me.”

His mother had taken Thalidomide during her pregnancy, and Campbell had been born with shortened fingers and toes and a curvature of the spine. Some of the neighborhood children were not always kind.

“Comic books just so happened to the catalyst that introduced me to my artistic abilities,” Campbell said.

His parents did the best they could to support the fledgling artist.

“They were ... poor parents who spent most of their days working very, very hard to make sure their children had food on the table and had warm clothes, and making sure we stayed in church and stayed in school and respected our elders,” he said.

Campbell, 60, attended Burke High School, doodling in the margins of his notebooks. He was good friends with Wendell Gilliard, who went on to a career in politics. The two of them worked part-time at the clothing store, International Tops and Bottoms, operated by Gilliard’s brother.

“Back then, we had gotten involved in group called the Fantastic Five,” Gilliard recalled. “Believe it or not, we used to model clothes.” It was good experience. “It exposed us to the business world.”

Gilliard said he knew then that Campbell “would become a great person.” His drawings were bold and impressive, his talent evident.

Many years later, established as an artist in New York City, Campbell reached out to his old friend with a request. The artist had made a new painting called “Bible Study,” a tribute to the victims of the Emanuel AME Church shooting. Would it be OK to unveil the work at Gilliard’s upcoming Martin Luther King Jr. Picture Awards?

“I thought it was very kind of him to do that,” Gilliard said. “Knowing he’s a renowned artist and wanting to do something special for the victims, it’s really an honorable thing coming from him.”

The 19th annual MLK Picture Awards is scheduled for 1-3 p.m. Jan. 31 at the Charleston Music Hall. It’s free and open to the public. Eleven local residents will be recognized and presented with a framed photograph of King, Gilliard said.

Gilliard was serving on Charleston City Council when he proposed starting the MLK Picture Awards as an opportunity to honor regular working people, he said. “Sanitation workers, crossing guards, nurses, community activists — these people are being overlooked,” he said. The awards celebrate diversity and community spirit.

Knowing who you are

Campbell, who now lives in Atlanta, said he hopes the unveiling of his new painting will lead to opportunities for him to show his work in Charleston.

That work includes some sculpture (dioramas), but mostly consists of painted collage: highly stylized images of black people with no pronounced facial features set against colorful and texture-rich backgrounds that often include newspaper clippings. He has made a number of series with themes such as music, family and children, boxing, education and Gullah culture.

When he was young, Gullah was a bad word representing cultural habits he was conditioned to be ashamed of, he said. But in the past 15 years or so, Gullah culture has come to be celebrated, even as it faces threats from socio-economic forces.

“So now the very thing I didn’t like and avoided is now my center of power,” he said. “I’m an ambassador.”

The new painting, “Bible Study,” is part of that series. It depicts an older woman with angel wings standing in a pool of blue water after her baptism, elated and weakened by joy, aided by two men. On her white garment are Bible verses and the images of the nine Emanuel AME Church victims. Behind the trees in the background is an image of Mother Emanuel and more Bible verses.

“Slavery taught us how to not love ourselves, to fail to embrace our authentic selves,” Campbell said. “That’s why the church is so significant to African-Americans. It’s rooted in the soul and spirit of our culture. It helps us stay close together, navigate and contribute to humanity. It’s very important to know who you are.”

He moved to New York in 1976, following a friend from Burke who had relocated a year earlier. The 1970s were an unstable period that saw many leave the Lowcountry, and many more leave downtown for the suburbs.

Campbell settled into an apartment near Yankee Stadium in The Bronx. Determined to find an original style that draws from his experiences and concerns, it took him some years to find his artistic voice, he said. He is largely self-taught.

Much of his work includes newspaper clippings, which lend a literal context to the pictures but also is reminiscent of the insulation slaves used in plantation cabins in the winter.

“Gullah people lined their house with newspaper for spiritual protection,” Campbell explained. “In my work, this is symbolic and representational of our practice. On the other hand, I’m blessed to find historical African-American newspapers that became a time capsule.”

So his art is imbued with both history and spirituality.

“Spirituality is the underpinning of my work,” he said. “My goal is to show that African-Americans are a real part of humanity and we need to be physically, spiritually and emotionally fit not only to maintain our healthy existence but to maintain the balance of what humanity is.”

And this hints at Campbell’s overarching philosophy.

“Everybody on the planet is interconnected. I believe that interconnection is critical to what life is all about. If every part makes a contribution, the whole body can be healthful.”

Richard Beavers, a longtime friend and advocate, operates a gallery in the Bedford-Stuyvesant neighborhood of Brooklyn. Beavers was 13 when he first encountered Campbell’s work, a painting of a man on a Brooklyn stoop playing the saxophone. It was the first work of art that captured his imagination, he said. A trip to the museum was less inspiring; he couldn’t relate to any of the paintings.

Later, his mother gave Beavers a precious gift, a print of Campbell’s “The Cotton Club,” to hang in the young man’s first apartment.

Next, Beavers attended Campbell’s one-man show in Brooklyn, hoping to meet the artist. Campbell invited the young man to be his assistant.

“He became a mentor and father figure,” Beavers said. “I learned a lot from him.”

And when Beavers opened his gallery in 2007, Campbell was the featured artist.

He said Campbell’s appeal extends well beyond the black community.

“If an artist is honest, people are drawn to the quality and technique ... and how the artist is distinctively interpreting a story, and conveying it to the viewer,” Beavers said.

Beavers said Campbell is as much an educator as an artist.

“I look at him as a griot,” he said. “He’s a storyteller. He’s a preserver of history. ... What it comes down to is, he’s an individual who understands that, with this blessing and gift, (and) the journey he’s been on, he has an obligation to educate uplift and empower people through his art.”

Gilliard, a fan of Campbell’s art, said he is honored that his old friend thought to make his re-entry to Charleston via the MLK Picture Awards. He remembers the drawings Campbell made as a teenager immersed in the world of comic books.

“They would literally slap you in the face,” Gilliard said. “He had talent.”

More than talent. Humility too.

“He never forgot where he came from,” Gilliard added.