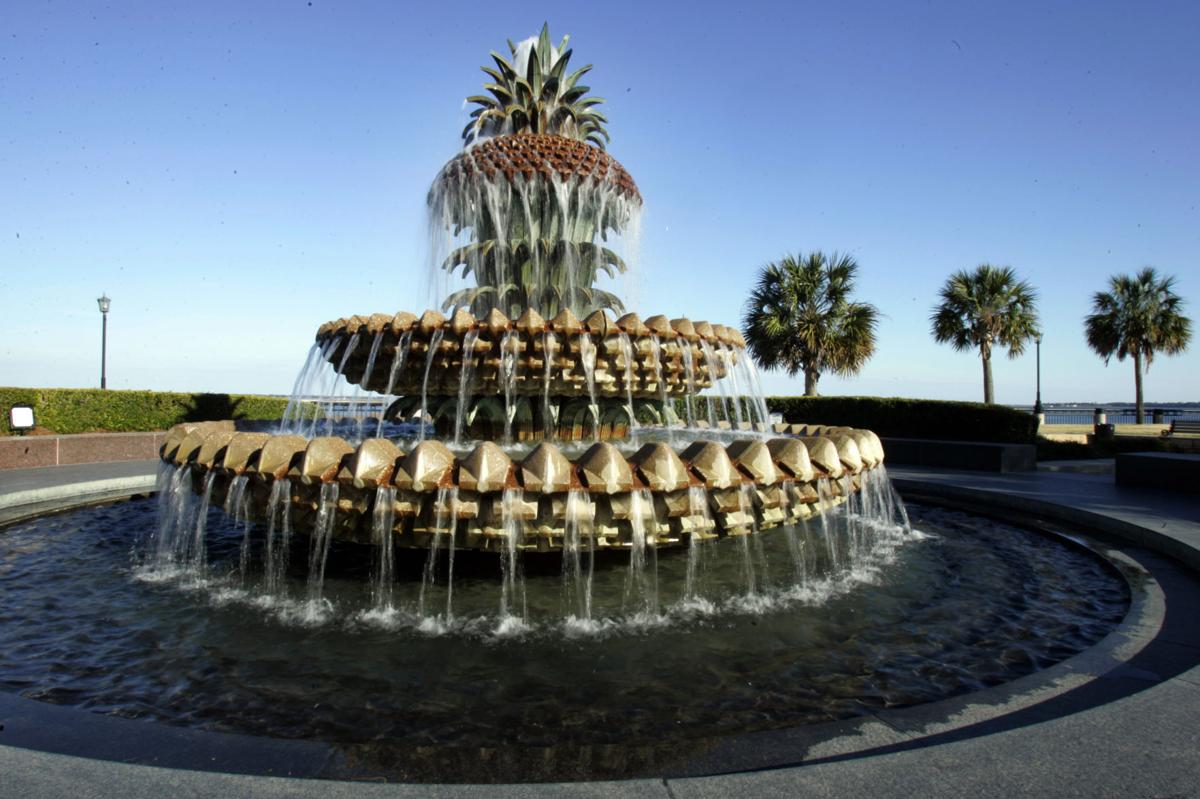 The Pineapple Fountain was installed at at Riley Waterfront Park in 1990. Provided 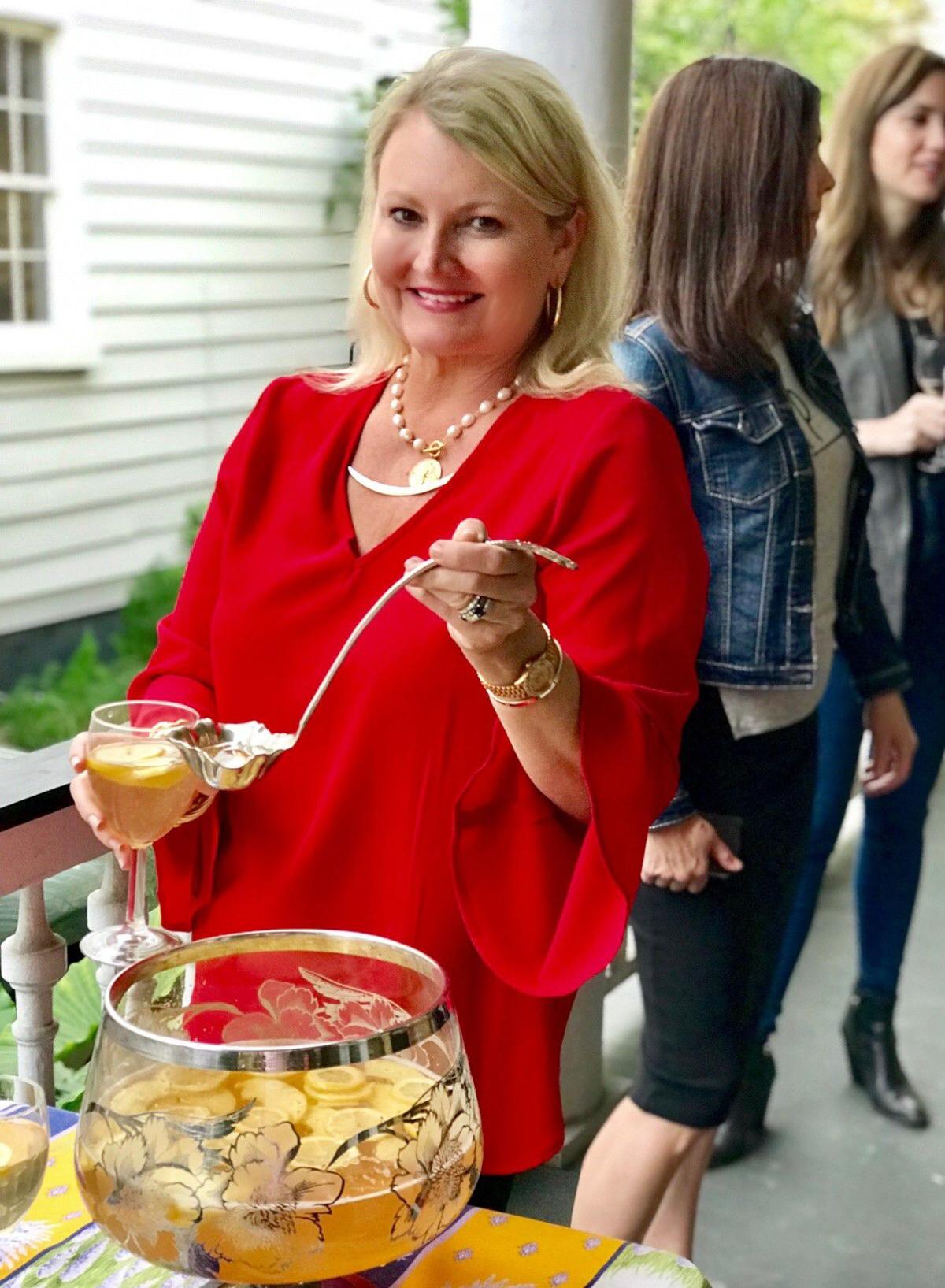 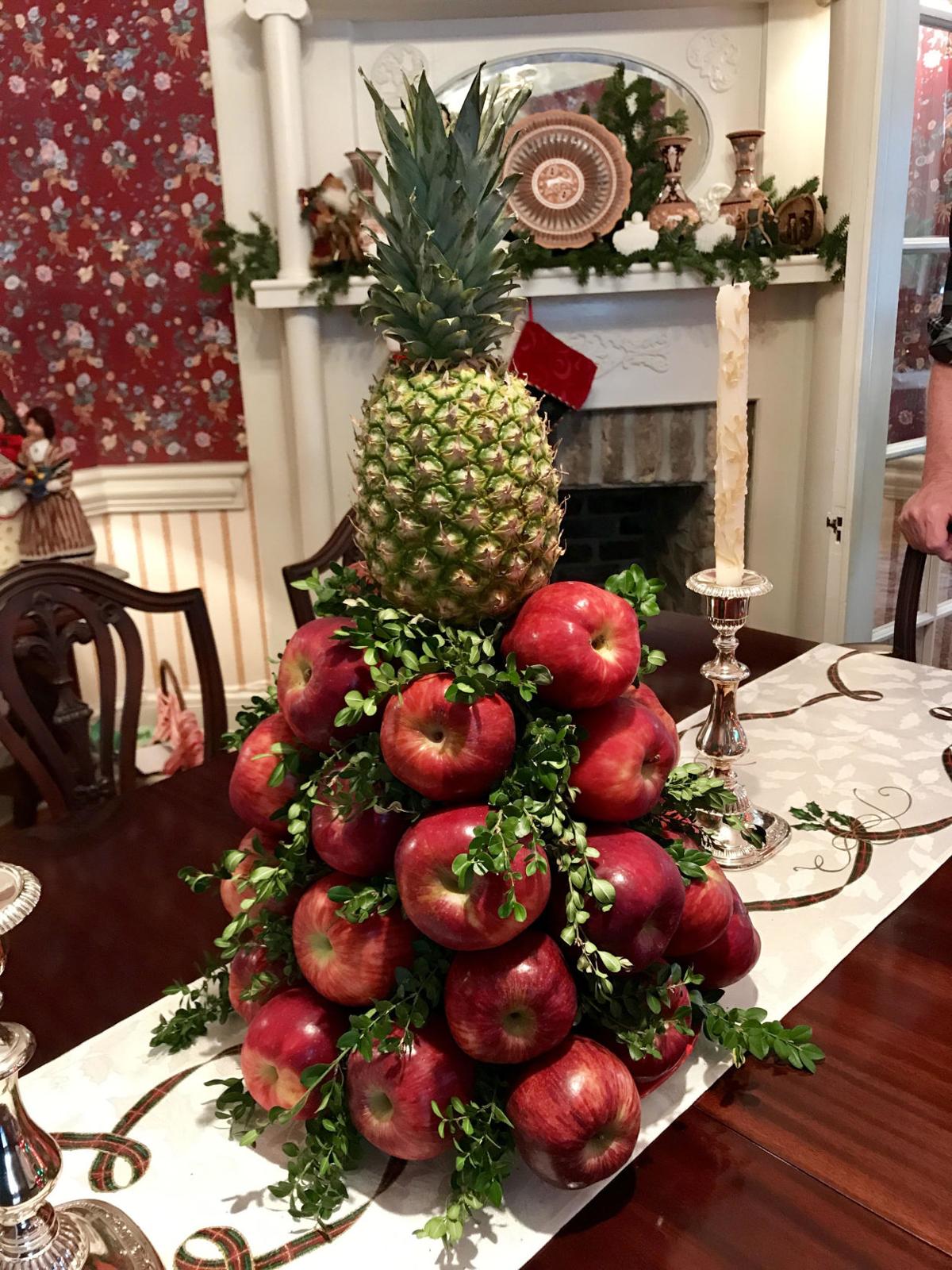 A pineapple tops a Colonial fruit display, a type of centerpiece that has graced Charleston tables for centuries. Provided/Paige Canaday Crone 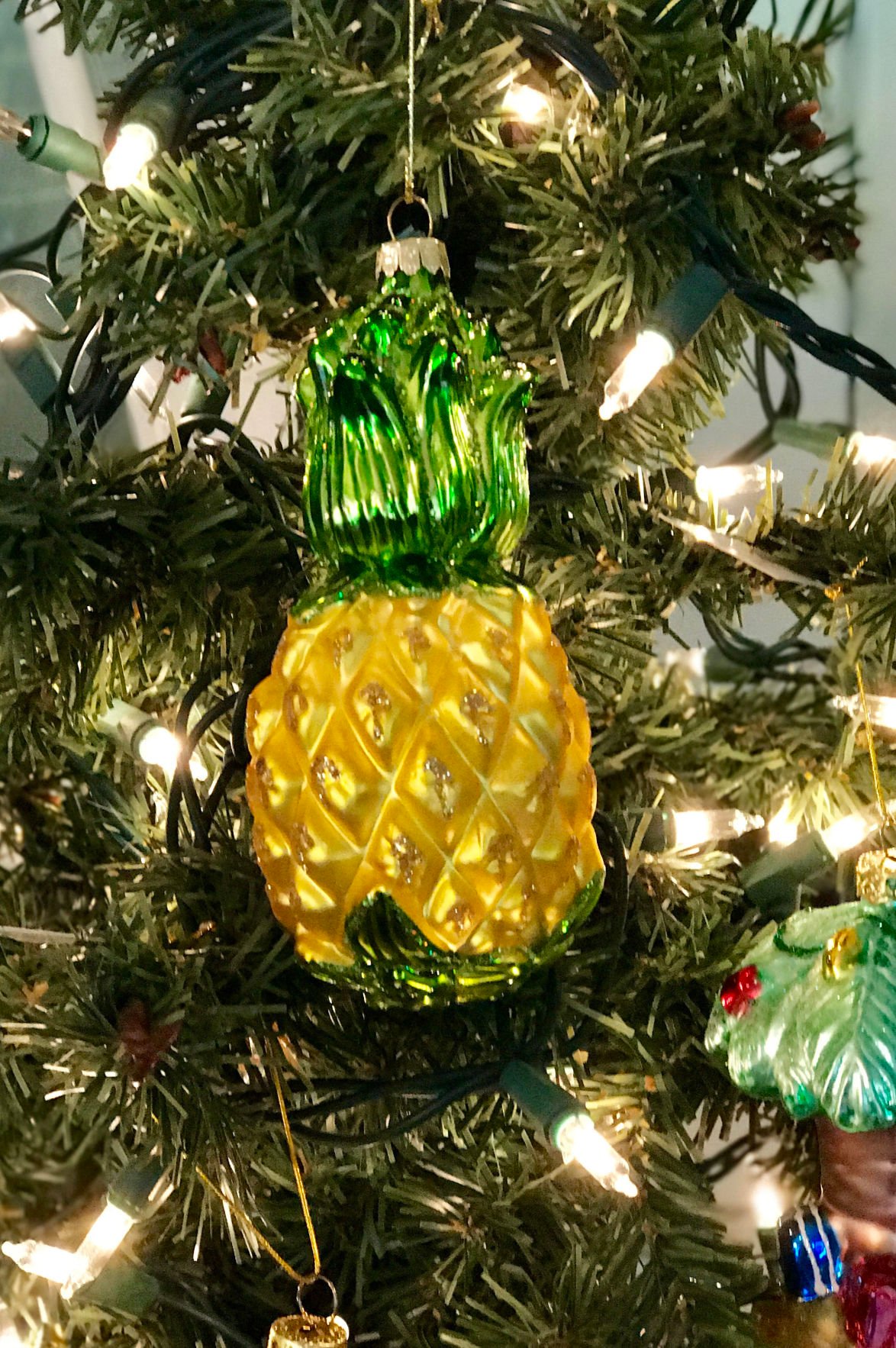 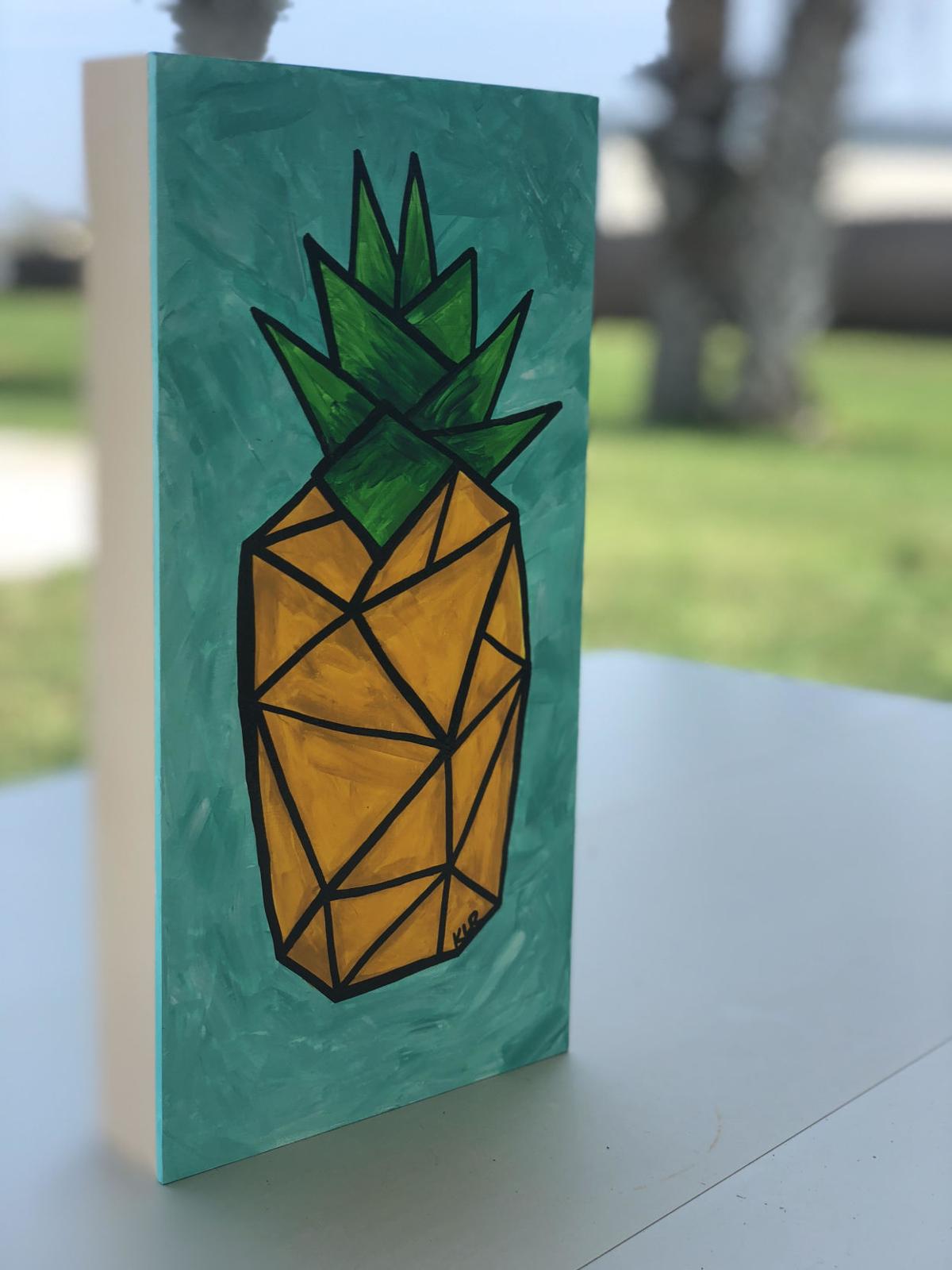 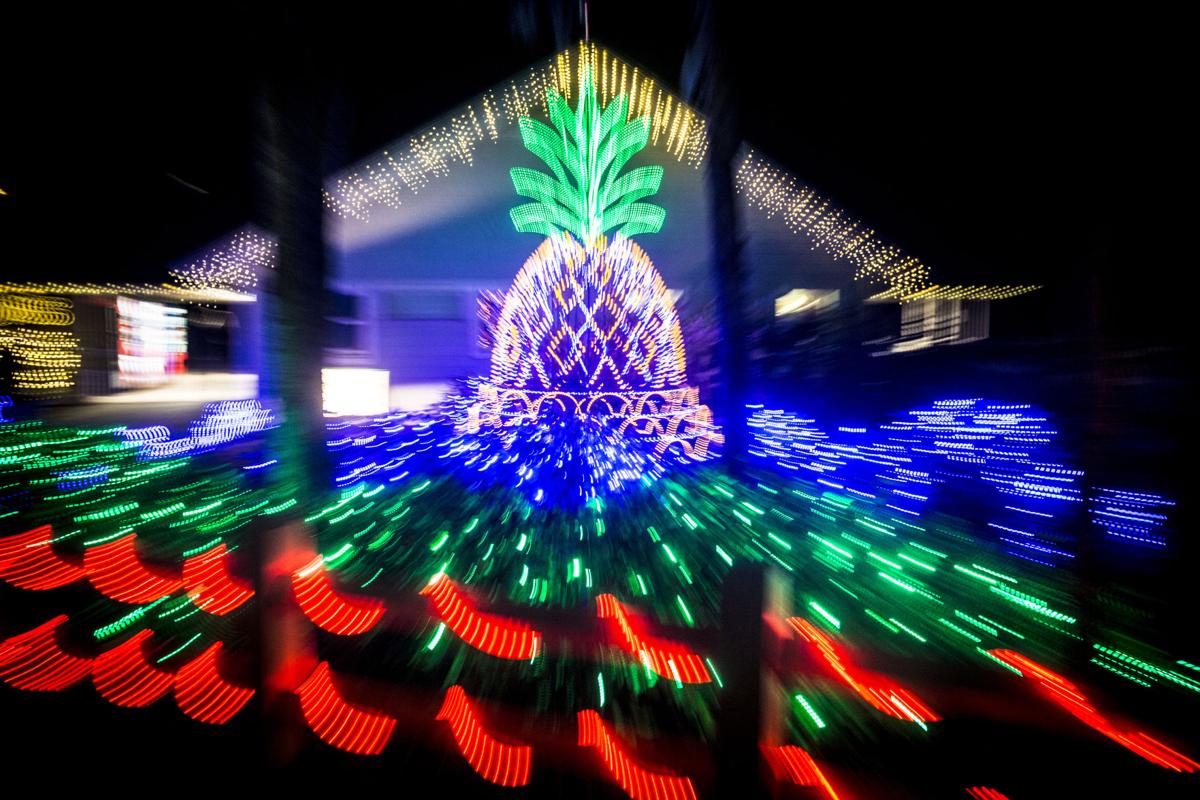 A light display of the pineapple fountain at the Festival of Lights at James Island County Park. File/Staff

It tops off fabled gates and looms large on a certain celebrated waterfront fountain. It sweetens centuries-old Charleston punches and lends luster to tour guide narratives. It holds its own in Christmas greens, stealing the show from lesser edibles like oranges and pears.

It is, of course, the pineapple; Charleston’s plump, if prickly, symbol of hospitality that pops up so regularly in our city it's as if it it grew on trees.

And, no, it has no relation to the pine cone, but for the fact that the "pine" in its name was inspired by its similar design, abutted then by “apple” in a nod to its taste.

No matter that local climes have never been hospitable to the tropical fruit, way back to Colonial times when it first rolled into town off ships. The local output was, of course, the likes of rice, its slender grain holding rightful real estate in the Charleston home. Think ornately carved rice beds and golden oblong strings of dainty rice beads.

Still, the pineapple persists, like a jovial, curiously coiffed second cousin in town for the holidays, who quite forgot the three-day rule of visiting (or perhaps, in this instance, it's more the three-century rule).

Need inspiration for holiday gifts? Leave it to the pros: Charleston artists

So just how did a nonindigenous tropical treat become the “it” symbol of the Holy City? After all, to borrow the parlance of longtime locals, it could be considered from "off," its ubiquity nothing more than agricultural appropriation.

This much we know. It came by way of the Caribbean, when frequent shipping routes beat a path between there and Charleston, bringing back island flavors, house styles and fresh fruit, too.

"Pineapples were enjoyed here certainly in the Colonial period," said Charleston County Public Library historian Nic Butler. "We do know looking at newspaper descriptions and shipping records that people are bringing them from the West Indies and enjoying them within the early days of Charleston."

In his Charleston Time Machine podcast series, Butler devoted a two-part episode on the all-important trajectory the English made from Barbados to the Carolinas.

In it, he pointed out that the historical connection between Barbados and Carolina goes well beyond a handful of influential colonists, or an architectural form, or a style of cuisine, or a dialect.

The spirit of late-17th-century Barbados, he offers, was encoded in the DNA of Carolina from the moment this Colony was conceived. Perhaps then pineapple is a bona fide part of our DNA after all?

"The pineapple is not native to the West Indies, it is native to South America," said Butler. Given the wars between the English and Spanish, procuring the pineapple was a daunting proposition until after the American Revolution when the United States became allies with Spain and could get directly to Cuba.

But when did a fruit become an emblem?

"Precisely when it acquired that symbolic value is a little bit of a mystery to everybody," said Butler.

Some say that the pineapple evolved as a decorative art by way of Charleston sea captains, who were known to hang a newly imported one outside their homes upon return from maritime pursuits, thus broadcasting that they were back.

"It was a sign of wealth and connections," said Butler. Both rare and valuable as a source of sugar, it enjoyed significant status. It was positioned prominently at social gatherings and was immortalized by the work of local artisans.

Today, Charleston continues to embrace its curious calling card. In 1990, then-Mayor Joseph P. Riley unveiled the Pineapple Fountain, at what is now called Riley Waterfront Park, and it has become a top photo opp for visitors and locals alike.

Residents champion it as integral to the Charleston lifestyle. Paige Canaday Crone, who grew up in Charleston, still keeps her mother’s pineapple brass trivet within arm’s reach for entertaining purposes.

More recently, she has been sharing its local significance in her role as principal founder of Charleston Protocol, a lifestyle brand that hosts corporate entertaining events and sells a line of products exemplifying the Charleston lifestyle.

Among the products are similar trivets, as well as glass pineapple ornaments.

"They fly off the shelves," she said.

Many suggest Williamsburg, Va., lays claim to this particular fruit configuration. Crone tossed the notion off, attributing the association to the other city's marketing savvy, while assuring Charleston's equal purchase in the iconic centerpiece.

Of course, the pineapple in Charleston has had far more applications than as decor, many of them digestible. When entertaining, Crone frequently serves up St. Cecilia Punch, a libation St. Cecilia Society members imbibed while pre-gaming before the society's alcohol-free concerts in the mid-19th century.

Crone serves it still, using a recipe adapted by a member of the Junior League of Charleston for its famous “Charleston Receipts” cookbook.

Made with one whole pineapple, the version also calls for lemons, green tea, sugar and carbonated water. Oh, and alcohol, plenty of alcohol, including both regular and peach brandy, heavy rum and Champagne.

“They would have a couple of these,” said Crone. In Butler’s Time Machine podcast entitled “The Language of Libations,” he underscores the heavy influence of alcoholic concoctions regularly mixed with fruit juices in Colonial South Carolina, in lieu of contaminated water.

Rittenhouse has a twofold draw toward her fruit of choice, having lived in Hawaii during art school and in Charleston for her husband's Navy career.

"Once I was in Charleston, I would wander around, gawking at the amazing architecture and soaking in the history. I realized that there were pineapples everywhere," she said.

Charmed by the city, the couple came to believe that Charleston was the Aloha of the East Coast. "Seeing the pineapple solidified that for us."

These days, it seems the rest of the country has jumped on the pineapple wagon, too. They sprout from ties and key chains, gilded and rendered freshly geometric or shrunk down into spry yellow logos.

After all, it long ago lost its rarefied status among the city’s swells. Mounds of them are readily available at Publix. The story behind its symbolism is shaky at best. Still, the pineapple abides. No matter how you slice it, in Charleston, the pineapple is here to stay.