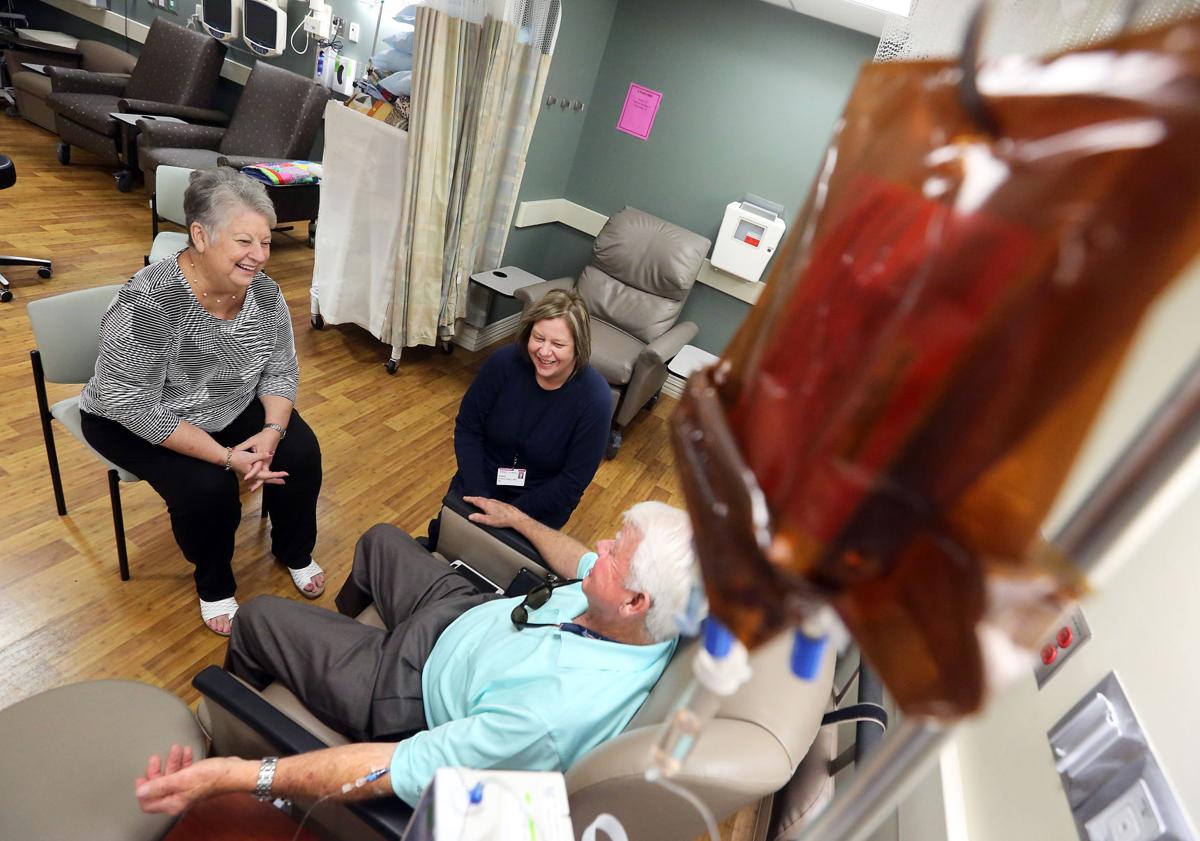 Seventy-three year-old Wayne Vereen talks with Roper St. Francis nurse Bobby Kelley (center) and his wife Linda during an infusion therapy procedure on Thursday, August 29, 2019. Vereen, whose father had Alzheimer's, volunteered for the program to try to help find a cure. Brad Nettles/Staff 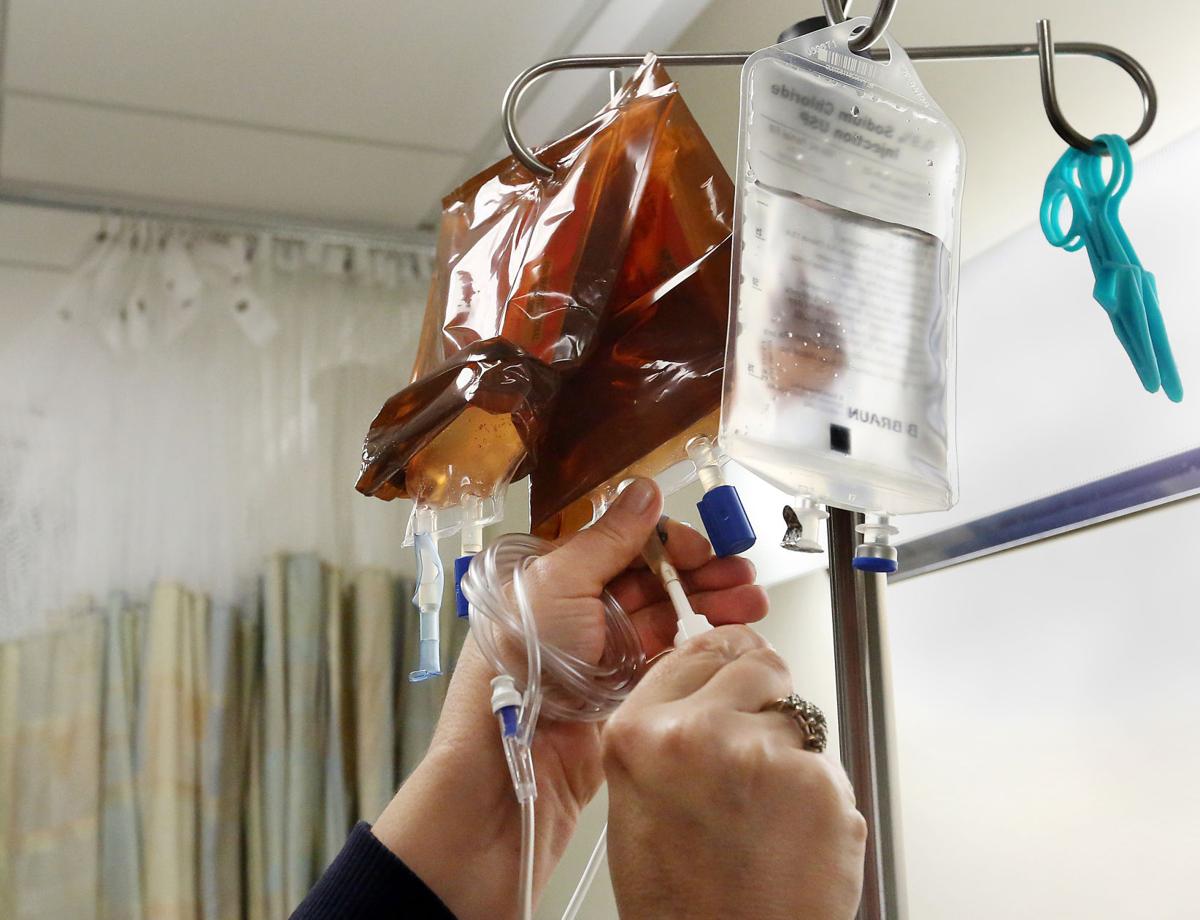 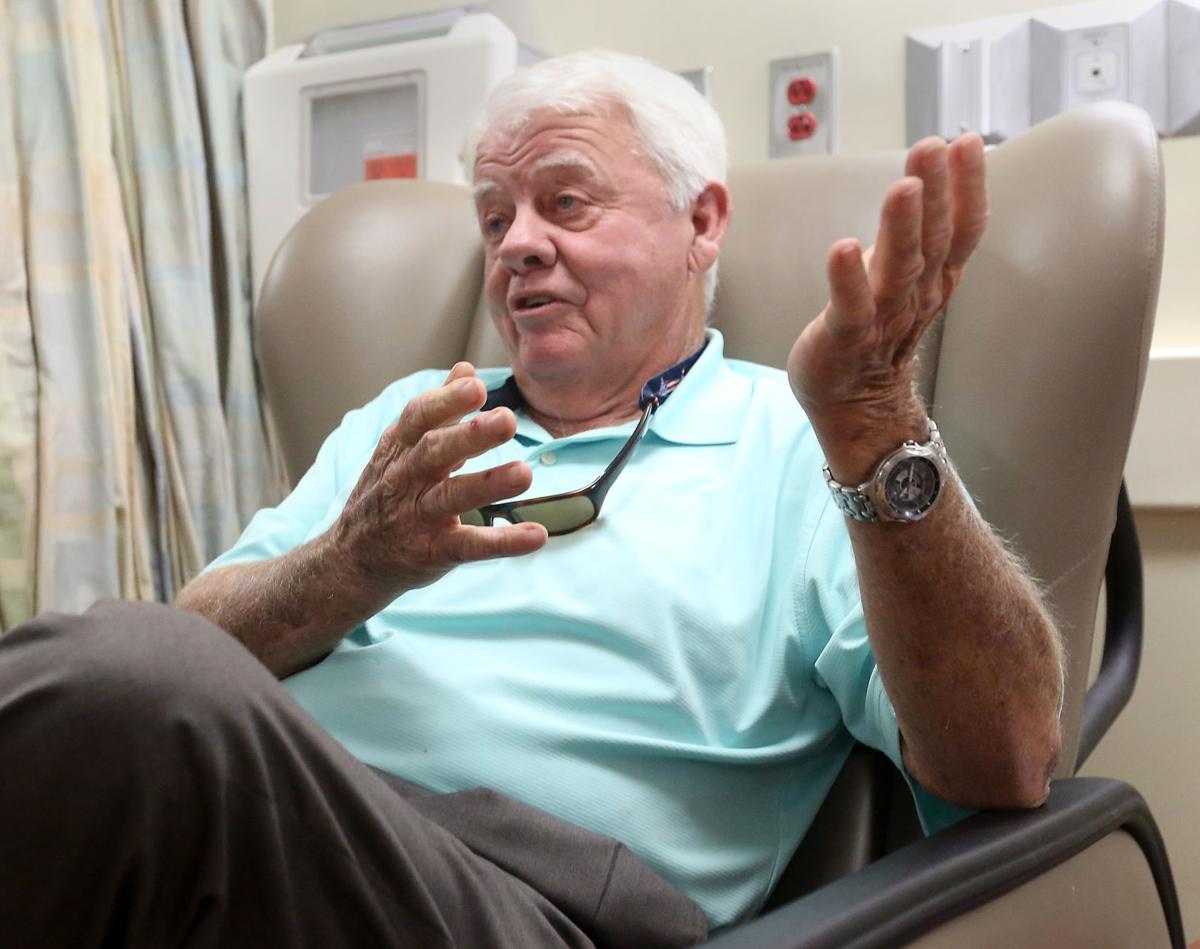 Seventy-three year-old Wayne Vereen talks about why he got involved with the Roper St. Francis on-going study involving an infusion therapy procedure for people with Alzheimer's in their family. Vereen, whose father had Alzheimer's, volunteered for the program to try to help find a cure. Brad Nettles/Staff 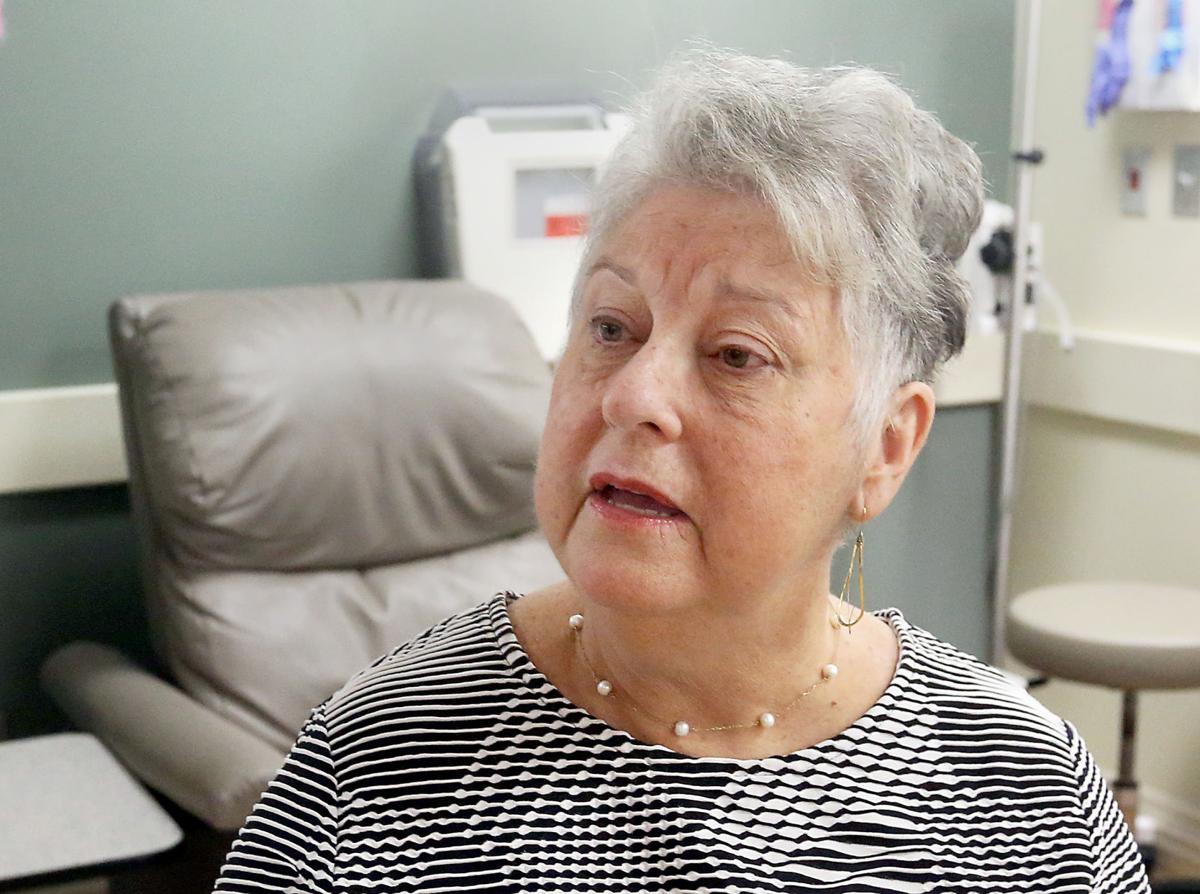 Linda Vereen talks about the Roper St. Francis infusion therapy for Alzheimer's that her husband Wayne is participating in. Brad Nettles/Staff

Seventy-three year-old Wayne Vereen talks with Roper St. Francis nurse Bobby Kelley (center) and his wife Linda during an infusion therapy procedure on Thursday, August 29, 2019. Vereen, whose father had Alzheimer's, volunteered for the program to try to help find a cure. Brad Nettles/Staff

Seventy-three year-old Wayne Vereen talks about why he got involved with the Roper St. Francis on-going study involving an infusion therapy procedure for people with Alzheimer's in their family. Vereen, whose father had Alzheimer's, volunteered for the program to try to help find a cure. Brad Nettles/Staff

Linda Vereen talks about the Roper St. Francis infusion therapy for Alzheimer's that her husband Wayne is participating in. Brad Nettles/Staff

Every time Wayne Vereen and his wife Linda make the trip to Charleston from Murrells Inlet, they try to make a day out of it.

They go to local Charleston restaurants and bakeries, and typically bring pastries to the staff and researchers at Roper Hospital.

"It's been rewarding for us," 73-year-old Wayne Vereen said.

For the past four and half years, Wayne Vereen has been a part of a five-year study at Roper. It involves a drug that researchers are testing to see whether it can slow the development of memory loss tied to Alzheimer's disease.

The Anti-Amyloid Treatment in Asymptomatic Alzheimer's Disease or A4 study began in 2014 with the National Institute on Aging. It calls for patients ages 65 or older who have a family history of Alzheimer's. Wayne Vereen's father battled the disease.

The hope is to come up with a treatment that is preventive for the symptoms of Alzheimer's. Experts say that treatment will likely be a combination of therapies, instead of a single solution, like a pill or a vaccine.

"Developing a vaccine has turned out to be more complex," said Dr. Victor Henderson, the director of the Stanford Alzheimer's Disease Research.

Up to this point, a lot of the attempts to craft a vaccine have been unsuccessful, Henderson said. One of the reasons for this, he explained, is that experts' and researchers' understanding of the disease has developed in recent years. He said the disease itself turned out to be more complicated than what was known in the past.

For example, prior to 2013, researchers weren't aware of nearly 10 additional genetic variations that were associated with an increased risk of the disease, meaning there were additional biomarkers, or things experts could pinpoint, to gauge a person's risk of Alzheimer's that were previously unknown.

Charleston school nurses talk back-to-school trials. 'It would be nice to have 6 of me.'

Henderson notes that the bulk of the advancements with Alzheimer's will probably mirror the changes in cancer treatment and chemotherapy. The highly effective changes won't necessarily be one thing like a vaccine, but a combination of things, he said.

"I think a lot of progress will be incremental," he said.

Dr. Jacobo Mintzer, the researcher who is leading the A4 study at Roper St. Francis, compared advancements in treating Alzheimer's to what is currently seen with Type 2 diabetes.

When a patient is diagnosed with diabetes, there are specific drug treatments, as well as lifestyle changes, that are prescribed to the patient. Recent studies, he said, have shown exercise and proper diet to be helpful with memory loss symptoms from Alzheimer's in some patients.

The A4 study could potentially shed light on another effective option given to Alzheimer's patients, he said.

Mintzer further emphasized that in the past experts were typically only able to diagnose the condition when patients were showing symptoms of dementia. With further research, he said experts can now highlight a person's risk for Alzheimer's 15 to 20 years before they start showing symptoms.

This came about through examination of abnormal lesions in the brain that are often associated with Alzheimer's. While not everyone with these lesions will develop the disease, it is an indicator for a high risk.

He said they were able to discover this information in studies similar to the A4 study.

"To do human research, you need people who are willing to volunteer," Mintzer said.

Wayne Vereen's father was diagnosed with Alzheimer's in the late '70s.

"We've lived that and seen what it does to people," he said.

Now, every few weeks, Vereen comes in and gets an infusion treatment of the drug solanezumab, as part of the A4 study. The drug is still in an investigational period.

Researchers are specifically looking into the drug's effect on amyloids, a protein that forms plaques on the brain of people with Alzheimer's. In the past, it was studied and denied approval by the U.S. Food and Drug Administration because it was found to be ineffective with people with mild to moderate Alzheimer's.

The current A4 study involves researchers testing to see if the drug can be used as more of a preventive treatment for people who have not been diagnosed with Alzheimer's but are at risk for it.

The Vereens first heard about volunteering for Alzheimer's research from a posting about a study in Fort Lauderdale, Fla. Wanting to be a part of something that was a little closer to home, they eventually heard about the A4 study.

After an examination and brain scan determining Wayne's risk of the disease and presence of amyloids, he was selected for the study.

"You'd be surprised how many people our age are concerned about Alzheimer's," Linda Vereen said.

The Vereens said one of the hardest things to deal with was Wayne's father not remembering who he was.

Wayne said he also can remember getting calls at work because his father would go missing from the facility where he lived. He was usually found wandering the streets.

"Without their trust and commitment,," Mintzer said, "we would have no research going on."

One day, Mintzer said he would like to see Alzheimer's become a chronic disease and not a progressive one. Essentially, patients would be diagnosed with the disease but treatments will be available that prevent the harsher memory loss symptoms.

The Vereens want to see and be a part of those advancements becoming a reality.

Letters to the Editor: Grateful for Cunningham's support of Alzheimer’s bill

I would like to thank congressman Joe Cunningham for becoming a co-sponsor of the Younger Onset Alzheimer’s Disease Act, H.R. 1903. I have met…