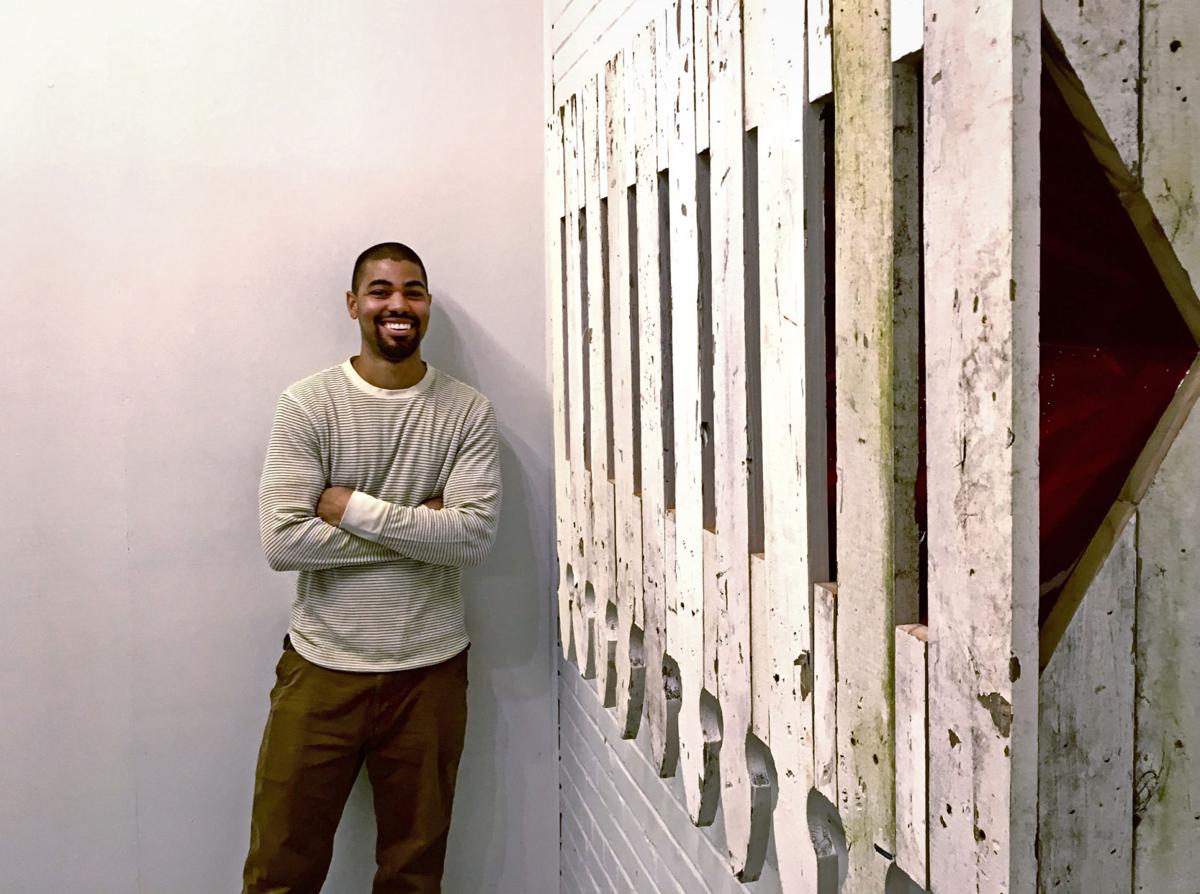 Artist Fletcher Williams III beside his piece "From a Distance," part of a solo show presented in 2017 by the North Charleston Arts Fest. Adam Parker/Staff 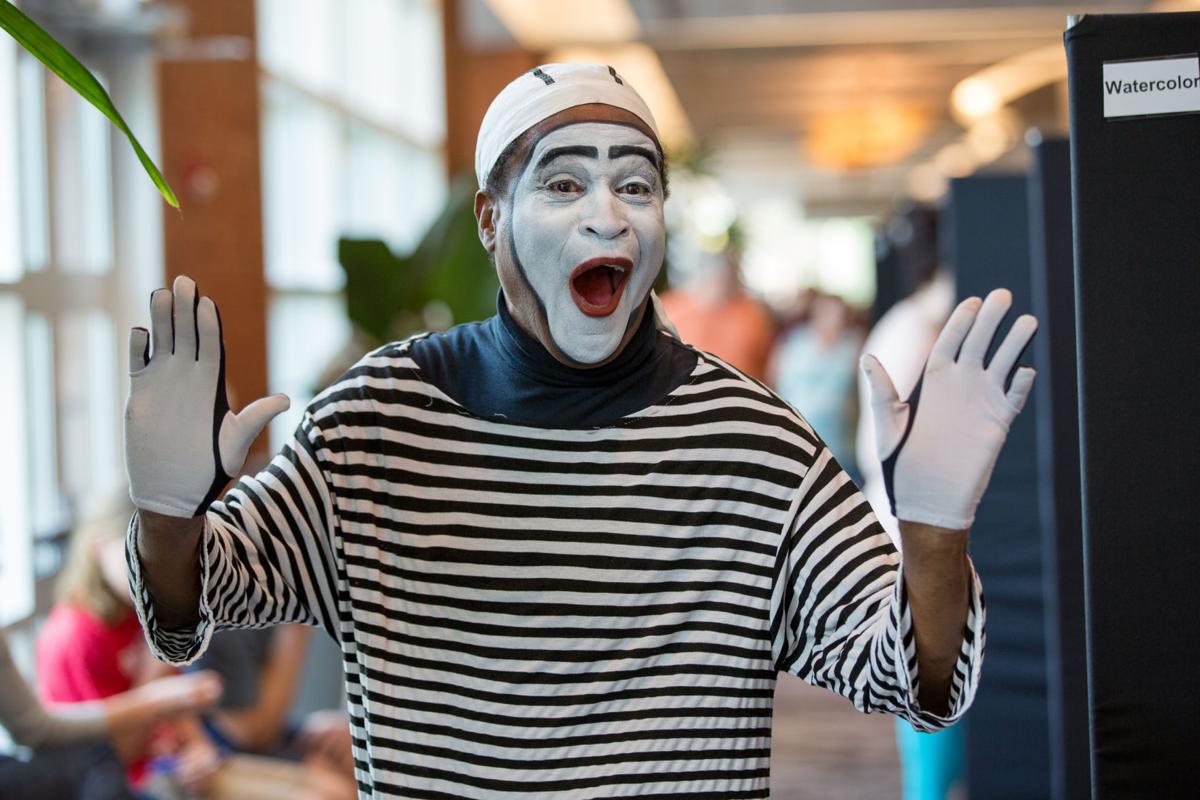 Myrtle Beach mime artist Will Shaw will be at the North Charleston Arts Fest Expo. (Provided) 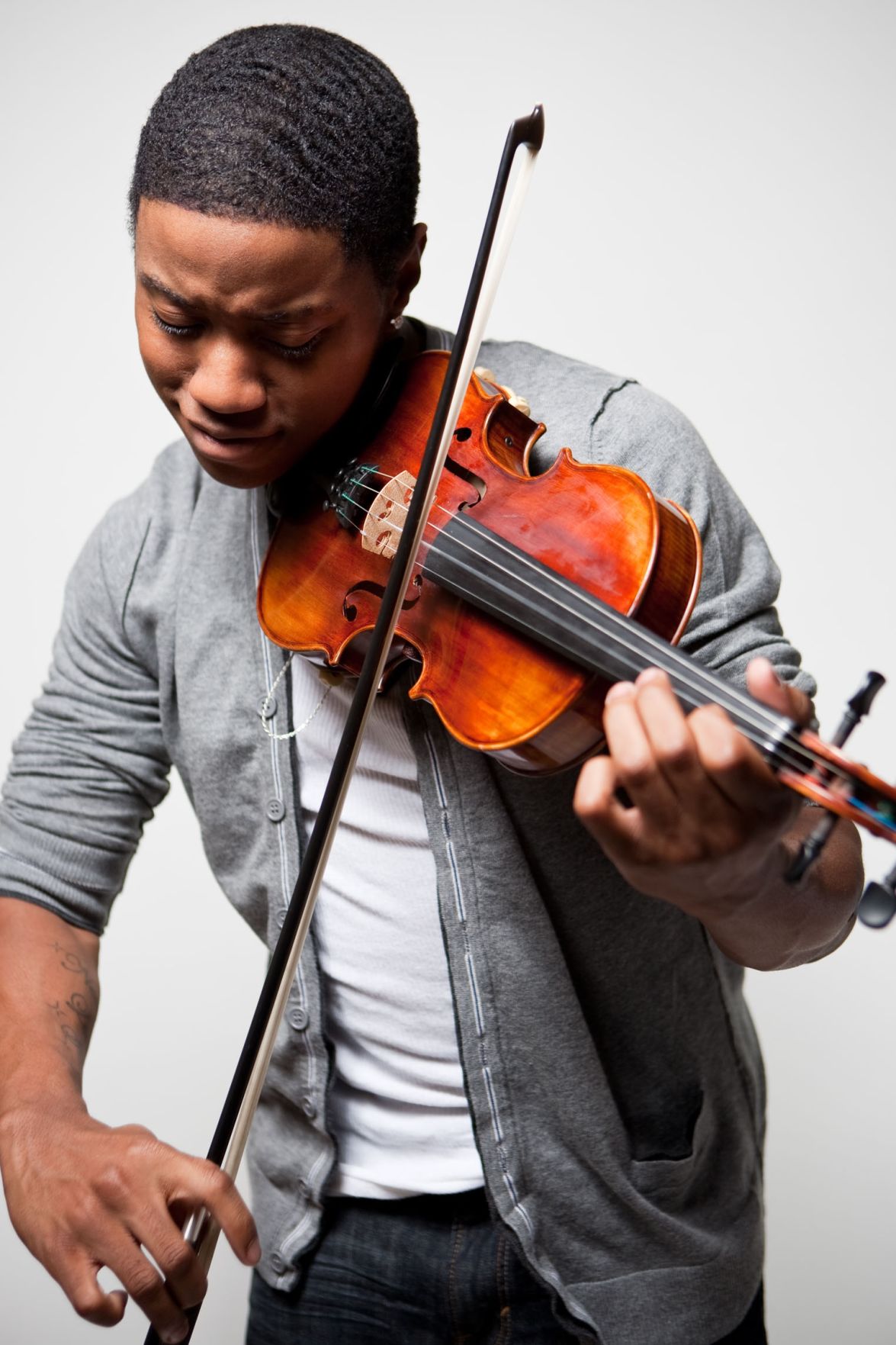 Violinist Daniel D is a North Charleston native who attended the Charleston County School of the Arts. He now lives in Charlotte, N.C. He and his band will perform at the May 4 Arty Block Party. (Provided) 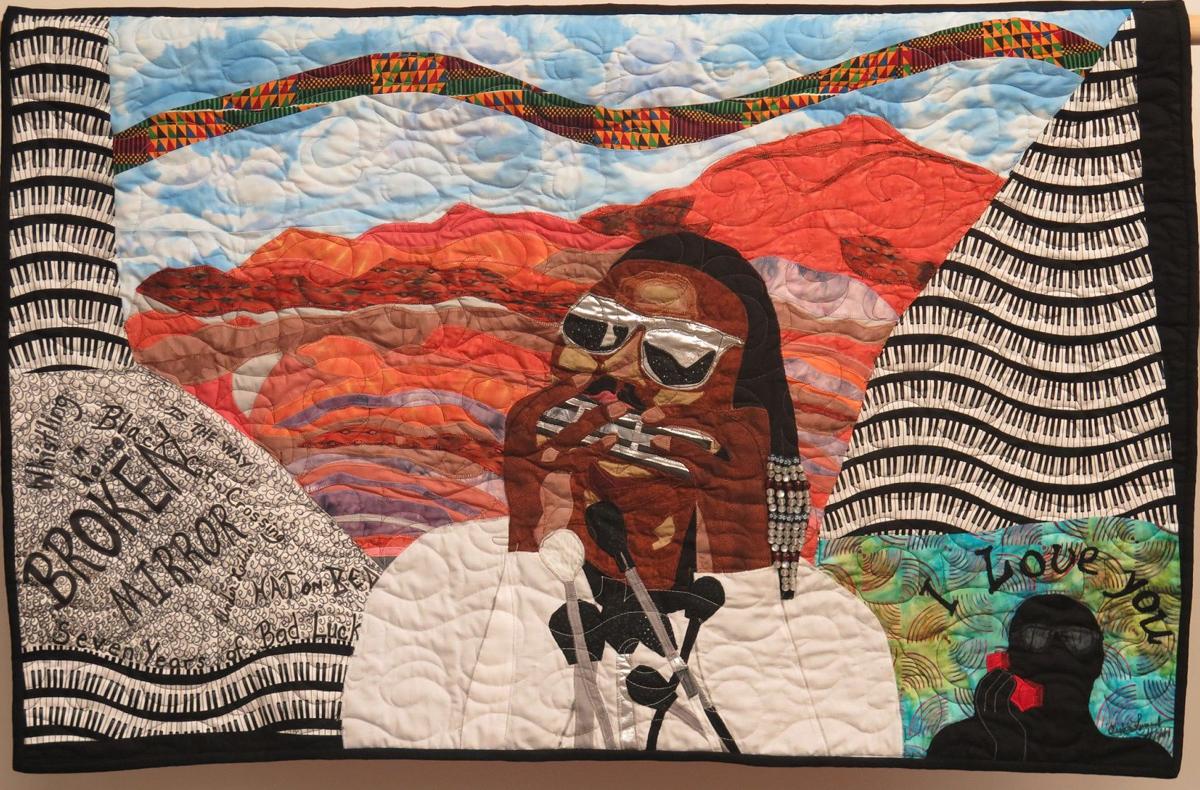 This quilt, called "A Celebration of Stevie Wonder: Higher Ground," is by Aisha Lumumba. (Provided) 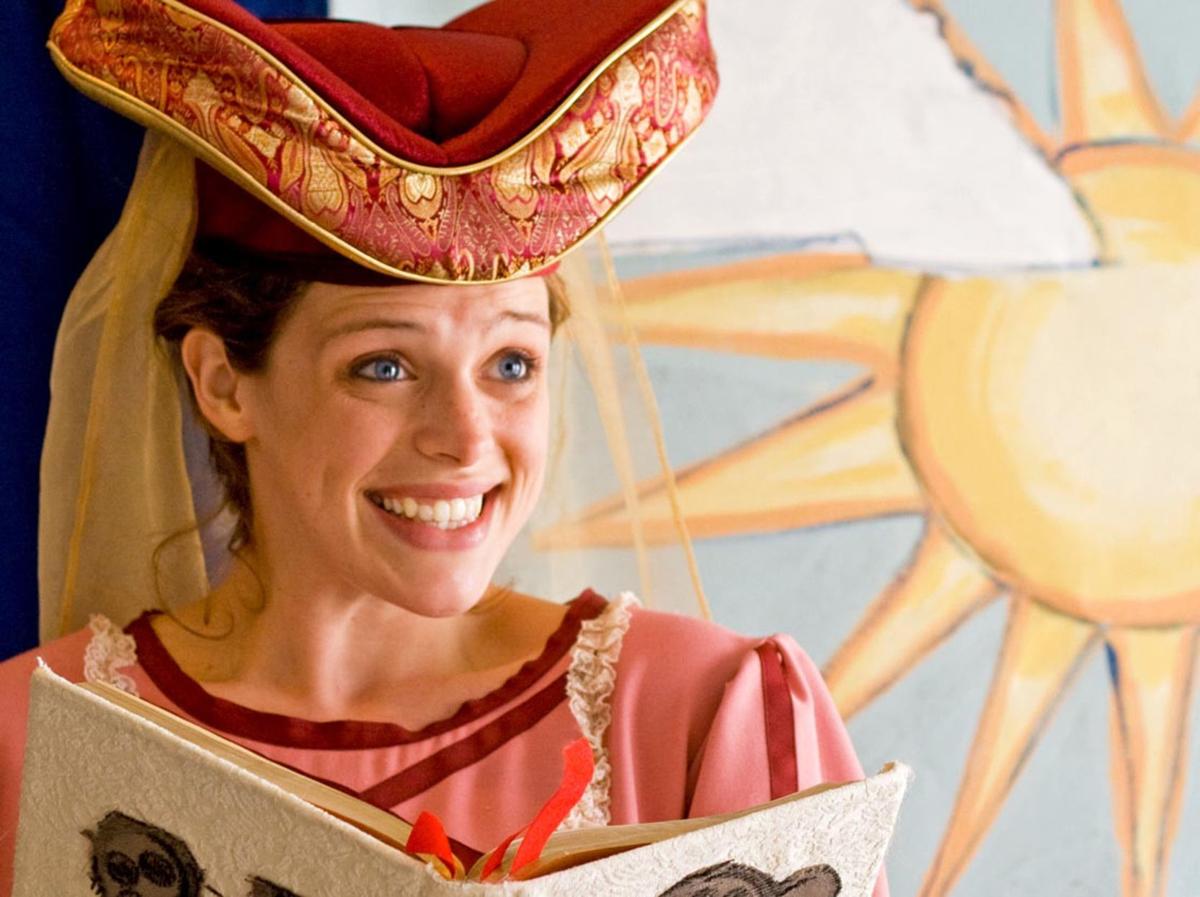 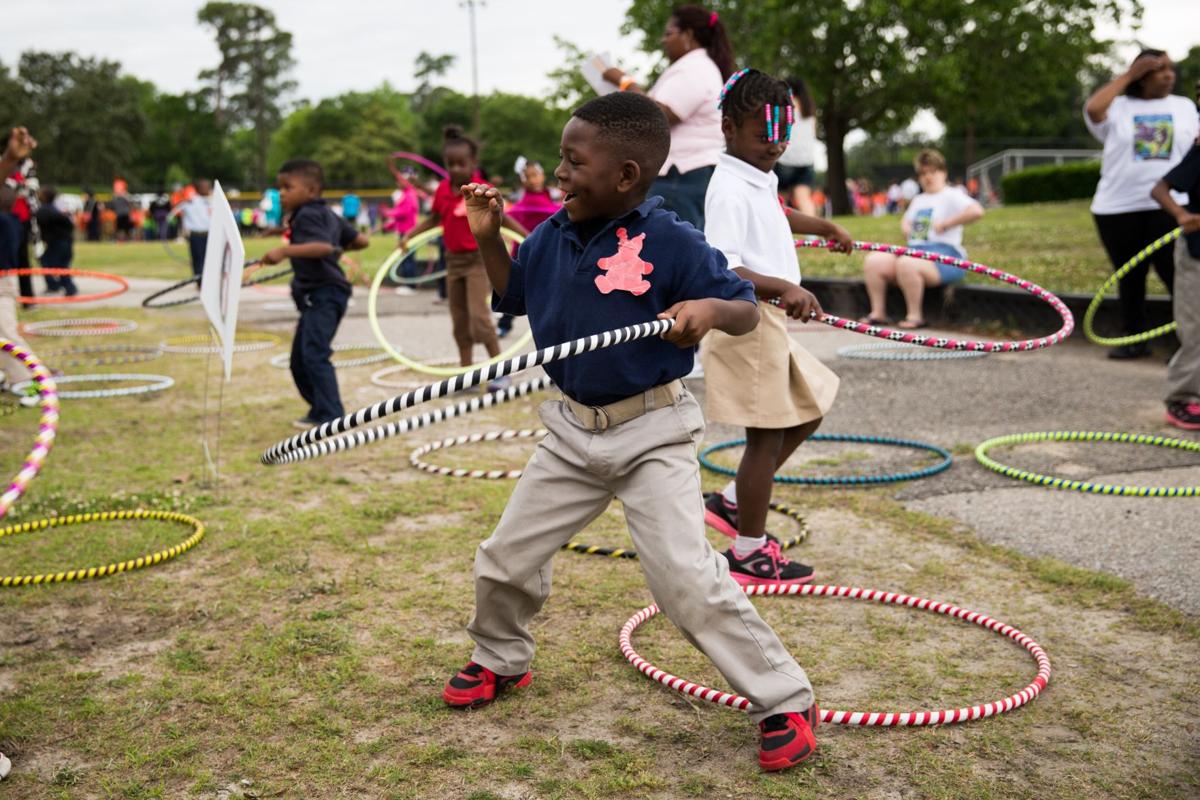 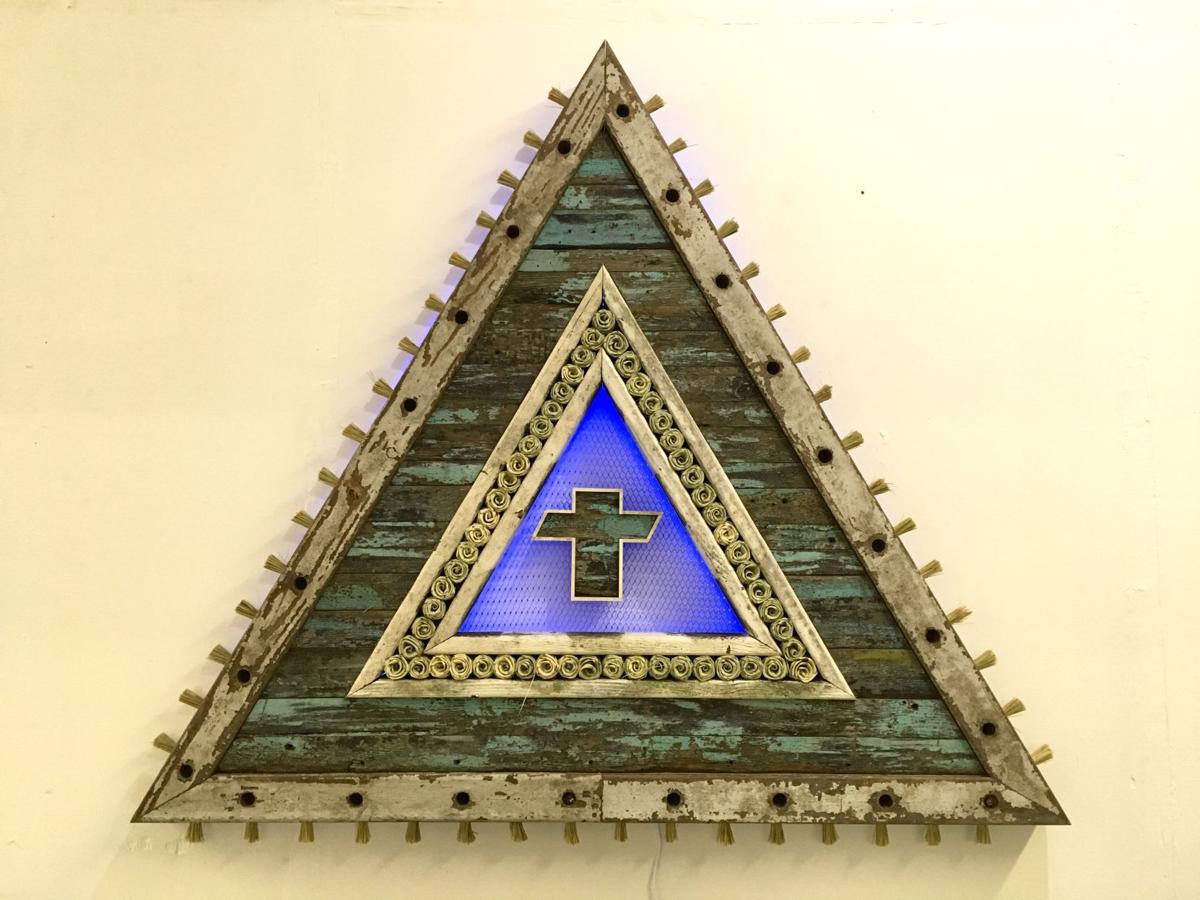 The works in Fletcher Williams' show is made of reclaimed wood, sweetgrass, bullrush, metal mesh, auto paint and other materials. Each piece is a commentary on urban living. (Adam Parker/Staff) 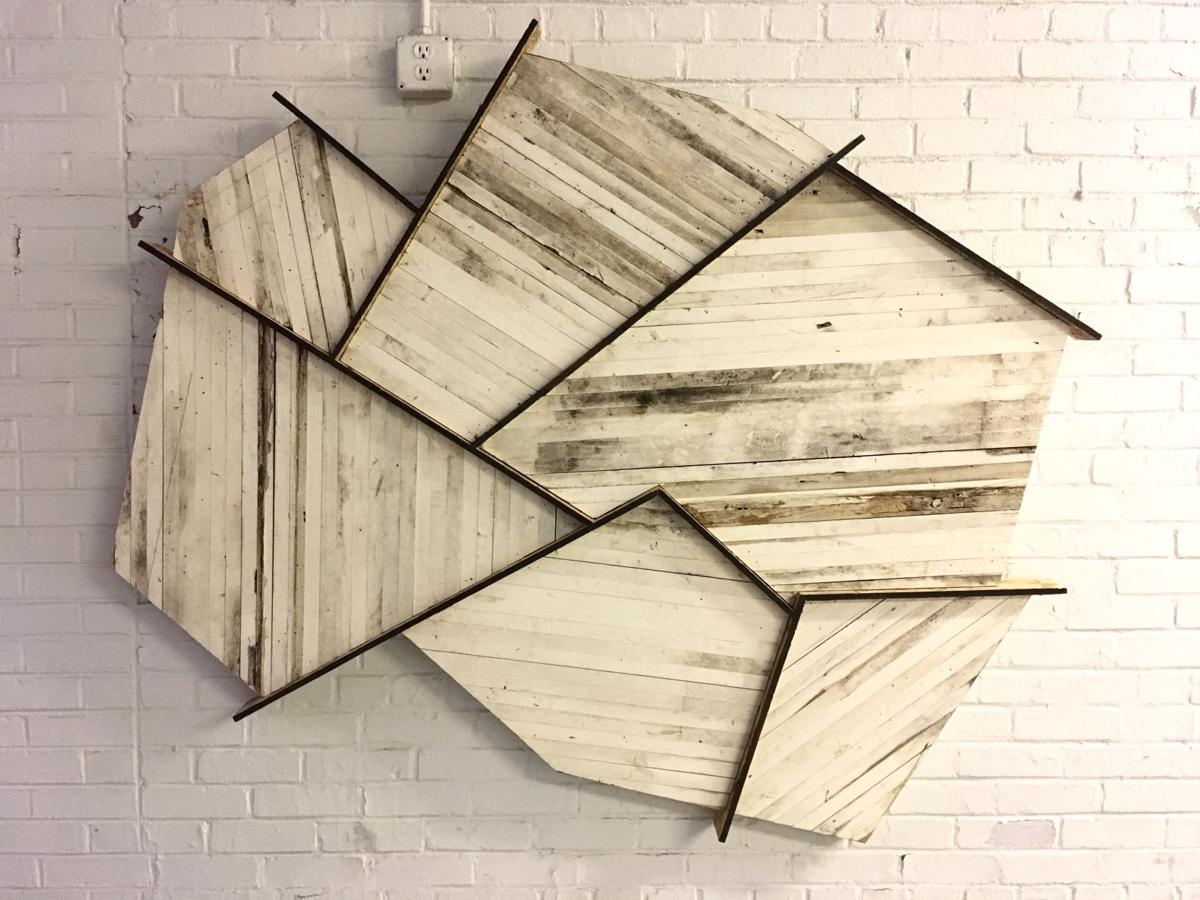 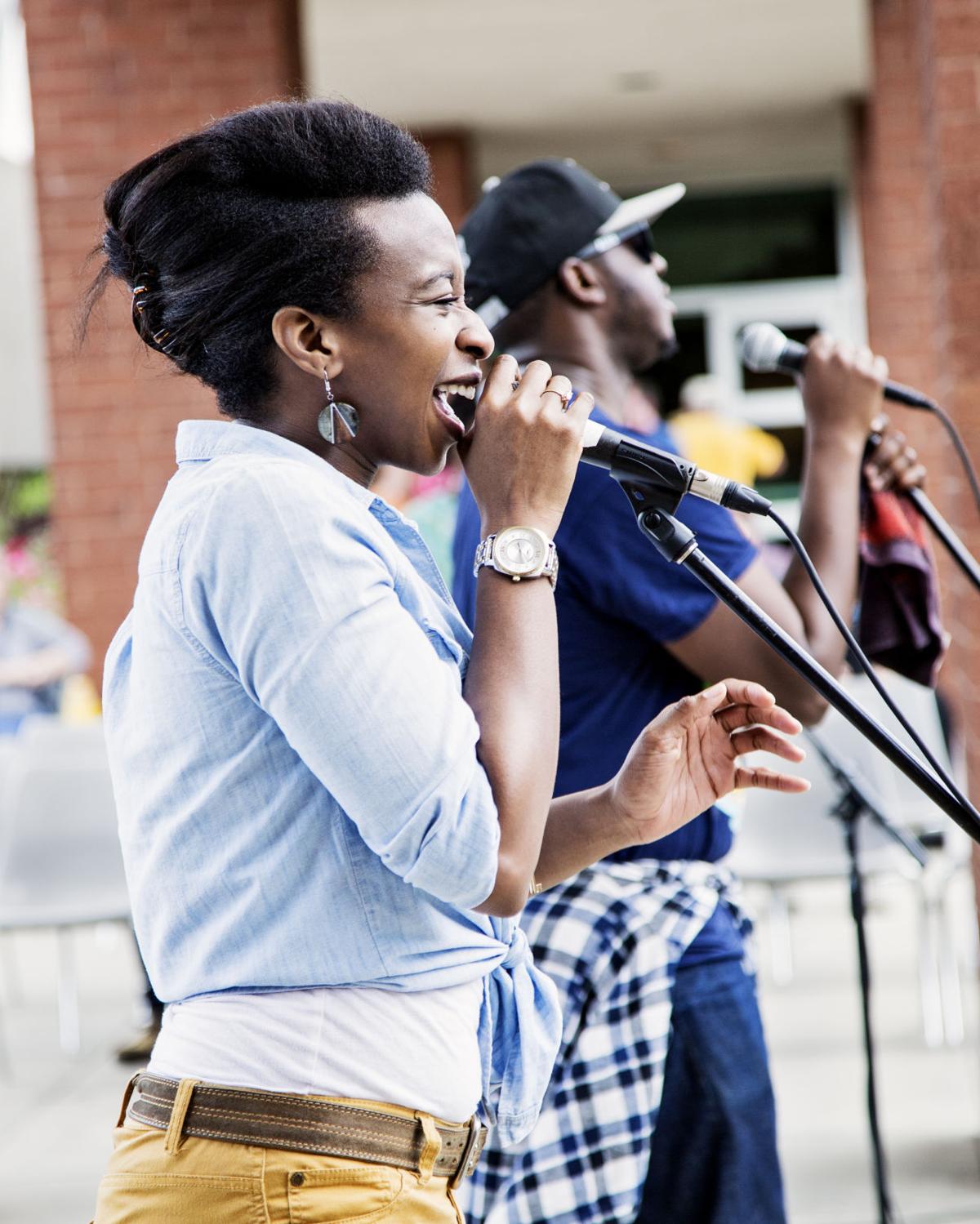 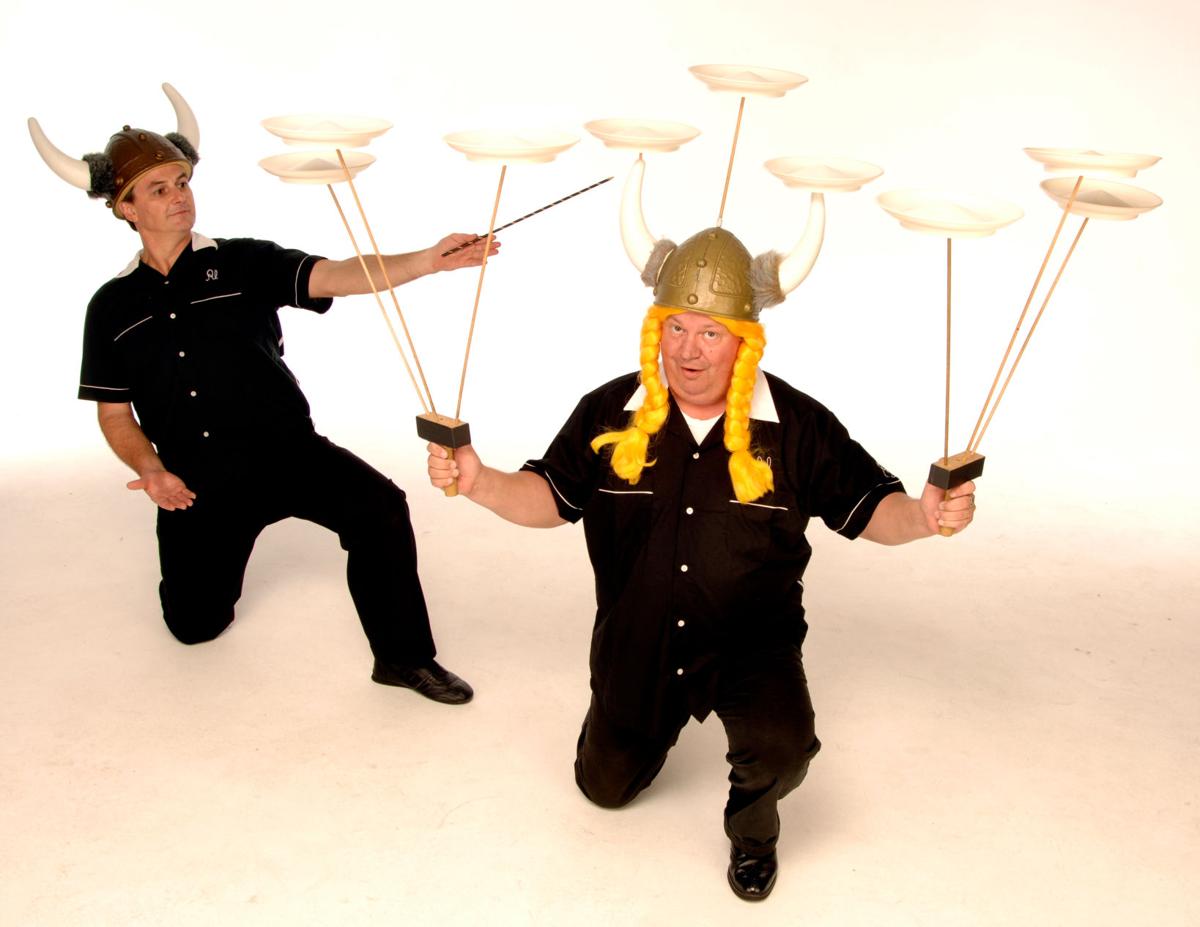 The Fettucini Brothers, Alfredo and Alfresco, perform their variety act at 10 a.m. and 11 a.m. May 5 at the Felix Davis Community Center, 4800 Park Circle. (Jim McGuire)

Artist Fletcher Williams III beside his piece "From a Distance," part of a solo show presented in 2017 by the North Charleston Arts Fest. Adam Parker/Staff

Myrtle Beach mime artist Will Shaw will be at the North Charleston Arts Fest Expo. (Provided)

Violinist Daniel D is a North Charleston native who attended the Charleston County School of the Arts. He now lives in Charlotte, N.C. He and his band will perform at the May 4 Arty Block Party. (Provided)

This quilt, called "A Celebration of Stevie Wonder: Higher Ground," is by Aisha Lumumba. (Provided)

The works in Fletcher Williams' show is made of reclaimed wood, sweetgrass, bullrush, metal mesh, auto paint and other materials. Each piece is a commentary on urban living. (Adam Parker/Staff)

The Fettucini Brothers, Alfredo and Alfresco, perform their variety act at 10 a.m. and 11 a.m. May 5 at the Felix Davis Community Center, 4800 Park Circle. (Jim McGuire)

Music and theater from morning to night, art-infused dancing in the streets, a fiber art show with cool quilts (think Stevie Wonder) from across the country, and an old fire station turned into a sculpture gallery: those are just a few tastes of the North Charleston Arts Fest that opens Wednesday.

At the heart of it is the expo, a flurry of art and activity May 6 and 7 at the Charleston Area Convention Center. The expo features dozens of performances on four distinct stages, plus visual art shows, a craft exhibit, antique vendors, a gem and mineral show, food courtyard and more. To say it’s family-friendly would be an understatement. It’s also free.

Performers and artists from across the state and all over the country are participating in the expo. Mime artist Will Shaw of Myrtle Beach will make his presence felt. John Tudor, a Columbia-based magician, will entertain patrons young and old. The Pea Ditties, of Gatlinburg, Tennessee, will present a show for young children called “Farm Fresh.” The Curious Moon Puppets troupe, based in Brunswick, Georgia, will perform “The Princess and the Frog.”

Lots of adult fare also is on tap, including music of the Andes, string band music from The Hungry Monks, folk dances of the Philippines, African drumming and dancing and a Beatles tribute from the cover band Sgt. Submarine.

The North Charleston Arts Fest, the flagship event organized by the city’s Cultural Arts Department, started in 1982 as a modest Park Circle celebration meant to infuse the arts into a neighborhood whose popularity had not yet caught on. By 1995, the festival had grown significantly and begun to attract visitors, so organizers moved it to the North Charleston Coliseum and lengthened it to two days.

This year, the Cultural Arts Department decided it would consolidate the events into five days — officially May 3-7 (though a couple of earlier events are planned) — in an effort to steep a richer brew. The finale at Riverfront Park was retired. The money once spent on fireworks now is plowed into the expo and other festival programs, Director Kyle Lahm said.

“We’re pretty excited about this slate of performers,” Lahm said. “It’s such a diverse array of music we’re going to have this year.”

And the benefit of a shortened festival is that it won’t compete against itself.

“Everything is a refresh,” said Ann Simmons, deputy director of the Cultural Arts Department. “It was time to look at what we were doing to see what was efficient and what wasn’t.”

The Art Walk and Street Dance, separate events in the past, have been combined into a single “Arty Block Party” at 5 p.m. May 4 on East Montague Street in the Olde Village. The Farmers Market at Park Circle kicks off at the same time.

North Charleston artist Fletcher Williams is mounting a solo show called “City Block” at the defunct fire station, 2006 Reynolds Ave. It will be on view through June 3.

The show includes 12 large sculptures made from reclaimed wood, wire mesh, automotive paints and other materials. The work symbolizes “the deconstruction and transformation of local neighborhoods,” and the motifs Fletcher uses are inspired by the city of North Charleston.

A fantastical soundscape by clarinetist Philip Lipton will accompany the show. Lipton and Williams are childhood friends who attended Charleston County School of the Arts together in the early 2000s.

One piece titled “Beyond the Proper There Are Dreams to Catch” refers to the opportunities, often overlooked, outside of historic Charleston. The sculpture references African motifs and colors, the Lowcountry landscapes and the urban environment.

Another work, “Disoriented,” is an abstraction of a cluster of homes, representing the fragmentation of community, Williams said.

A triangular piece, which is backlit and includes at its center a Chevrolet ribbon logo transformed into a cross, is “voodoo-ish,” meant as “a seal of protection” for those susceptible to unwarranted police stops and other injustices, the artist said.

An upside-down fence signifies the spectacle that results from a cultural divide between blacks and whites.

A piece containing a trio of illuminated crosses, called “Faith is No Match for Man’s Retribution,” refers indirectly to North Charleston Mayor Keith Summey’s November 2015 post-election comment, which many in the black community interpreted as a threat against them.

“It was a rather nasty election and I will not forget the nastiness and there will be some retribution in the future,” Summey said at the time. Soon after, he attempted to clarify his remark: “By retribution I mean that we are going to make sure we do what needs to be done in the communities that need it. Don’t sit here and fight us in trying to make communities better. If I have a chance to do something in your neighborhood and you’re going to resist and I’ve got another neighborhood that’s willing to work with me, I’m not going to waste my time with you.”

The installed artwork references urban blight and civic failure, Williams said. The façade mimics the physical state of disrepair found among many structures in the city. The metal mesh and flashing colored lights are akin to what one finds at a corner bodega in an area without supermarkets. The crosses represent hope and faith.

“Residents view the local government as not helpful,” he said.

The Art Fest’s fiber art show, now in its 11th year, will feature 32 artists and about 45 individual pieces, on display at North Charleston City Hall. The theme is “Move On Up and Reach Higher Ground,” a reference to songs by Curtis Mayfield and Stevie Wonder.

“We’ve had a very bad two years in the Lowcountry,” said curator Torreah “Cookie” Washington, referring to the shooting at Emanuel AME Church, the gunning down of Walter Scott in North Charleston after a traffic stop, the subsequent trials, and the contentious and divisive presidential election. “So I picked this theme that I thought would be kind of uplifting and cause us to focus more on the good.”

Most of the pieces on display are quilts, though three dolls and one cloth work on canvas also are included, Washington said.

“The show has gone national,” she said. “We have quilters from as far away as California, Oregon and also Florida, North Carolina, lots of Georgia girls, Ohio, Connecticut and New York — there’s always a great contingent from New York.” Carolyn Bracket is a Conway resident with a piece in the exhibit; Andrea Monilofal Curtis Foster is from Columbia.

Most of those participating are not full-time artists but, rather, career professionals for whom fiber art is an avocation and, often, part of a spiritual journey, Washington said.

“And every year this show gets better and better,” she said. “I’m excited about the quality of the work.”

“There will be cake,” Washington assured.

Caroline Self, North Charleston’s artist-in-residence, will exhibit up to 30 paintings at City Hall 8 a.m.-7 p.m. May 1 through June 30.

“What I’m hoping ... is to really engage the viewer,” Self said. “You have to look deeply at the pictures to discern shapes and patterns and words.”

She often adds text, sometimes burying it in layers of paint.

“I try to add positive words. Sometimes I write poems into them, sometimes I write praises that are topical in my mind, or parts of songs,” Self said. “This collection has a lot of music written into it and a lot of dance.”

The abstract paintings are made with acrylics and cold wax on canvas board. Using a palette knife, Self will build up layers of color and texture, sometimes using nails to etch patterns into the thickening paint and wax.

She was born and raised in Fayetteville, North Carolina, and first moved to the Charleston area about 23 years ago. In 2004, she took a job as education programmer at an art center in Athens, Georgia, organizing classes for all ages and managing eight art studios. Last year, she returned to the Lowcountry.

As the city’s artist-in-residence, Self has visited many local schools and worked with students on art projects, showing them her technique and getting the kids to apply the materials to the canvas.

“Kids love it, they think it’s cool and fun,” she said. “Any time you can mix cold wax, paint and nails, that’s a hit.”

Be sure to check the full program for other scheduled workshops, lectures, demonstrations and tours. Go to http://northcharlestonartsfest.com for the expo, daily events, competitions and special exhibitions. Printed programs also are available at various locations throughout the city.

WHERE: Various locations. The two-day expo, May 6 and 7, is at the Charleston Area Convention Center, 5001 Coliseum Drive.

COST: Many events are free. Some are ticketed.