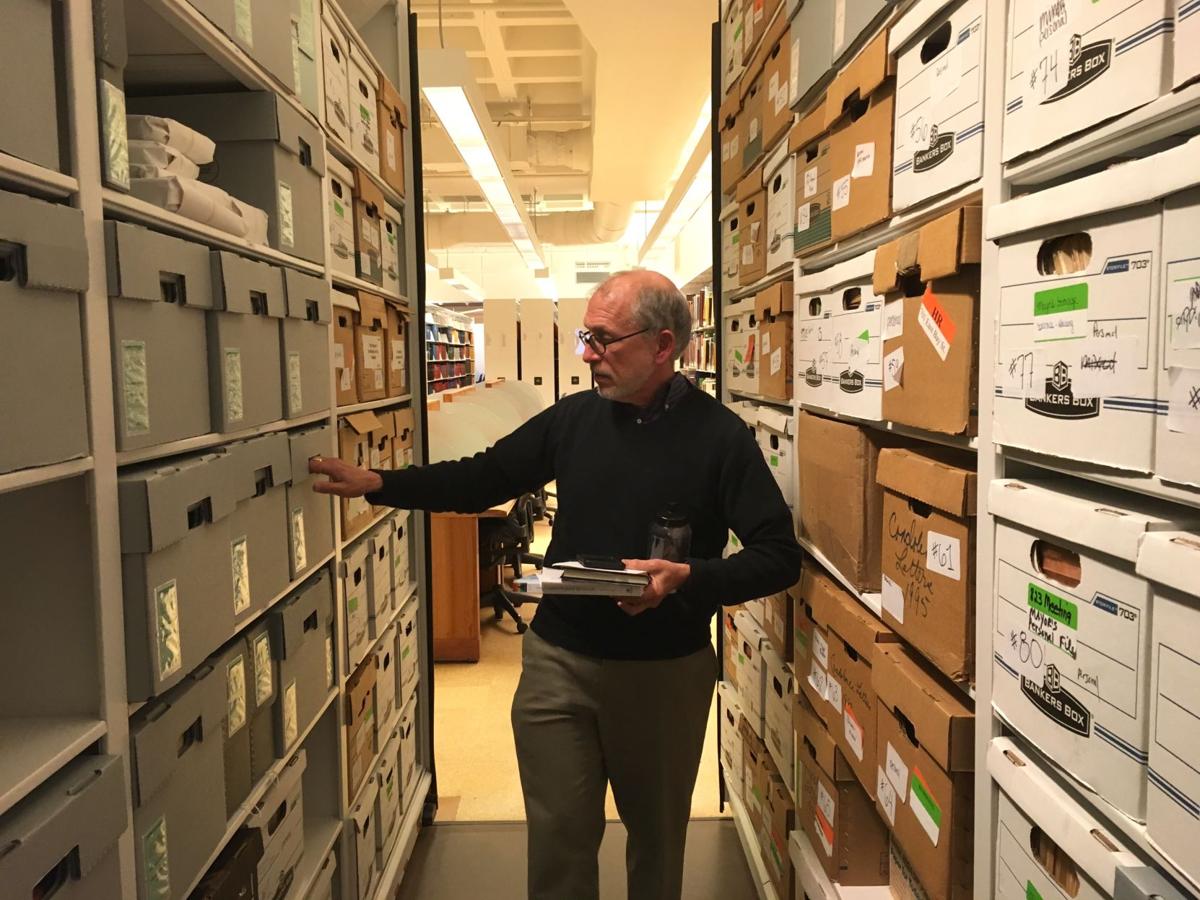 Harlan Greene, head of special collections at the College of Charleston, has launched an LGBTQ archive project. (Adam Parker/Staff) 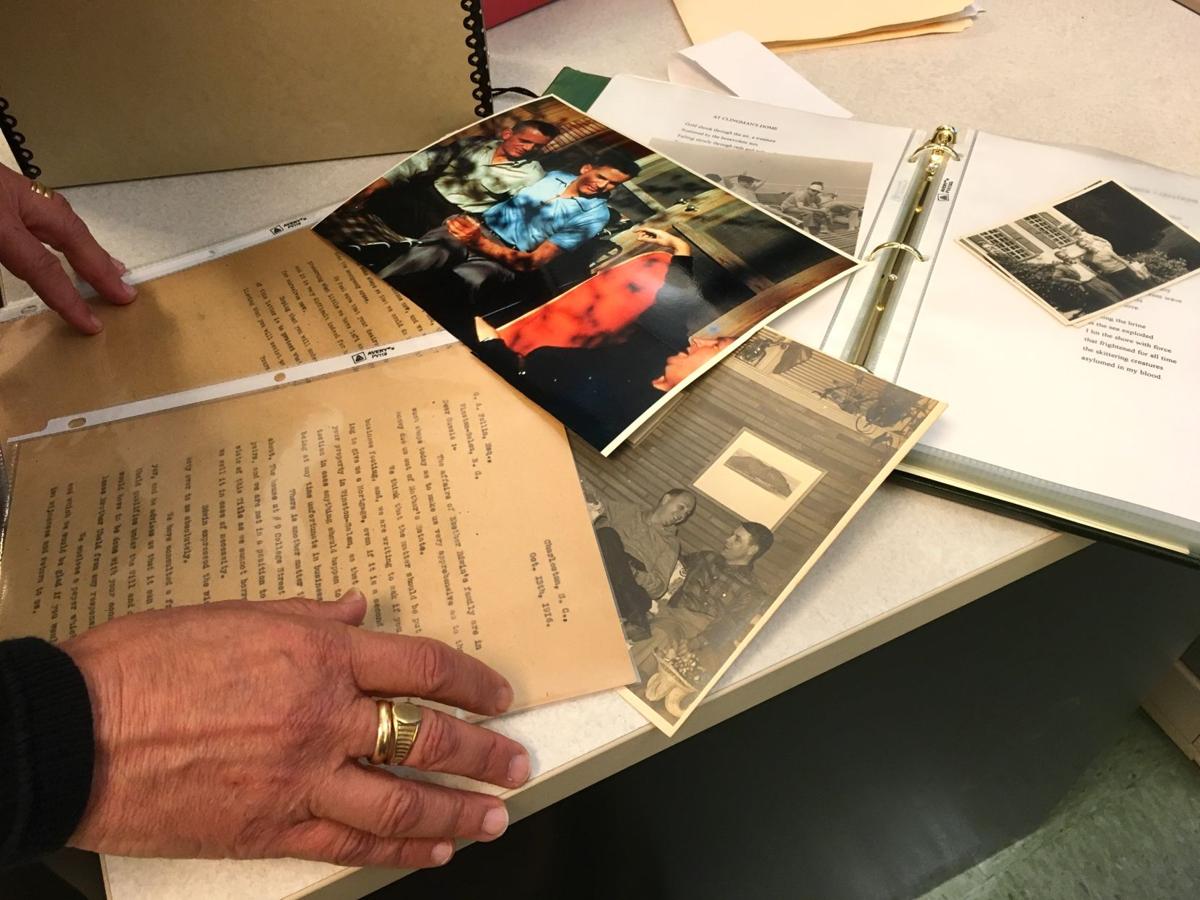 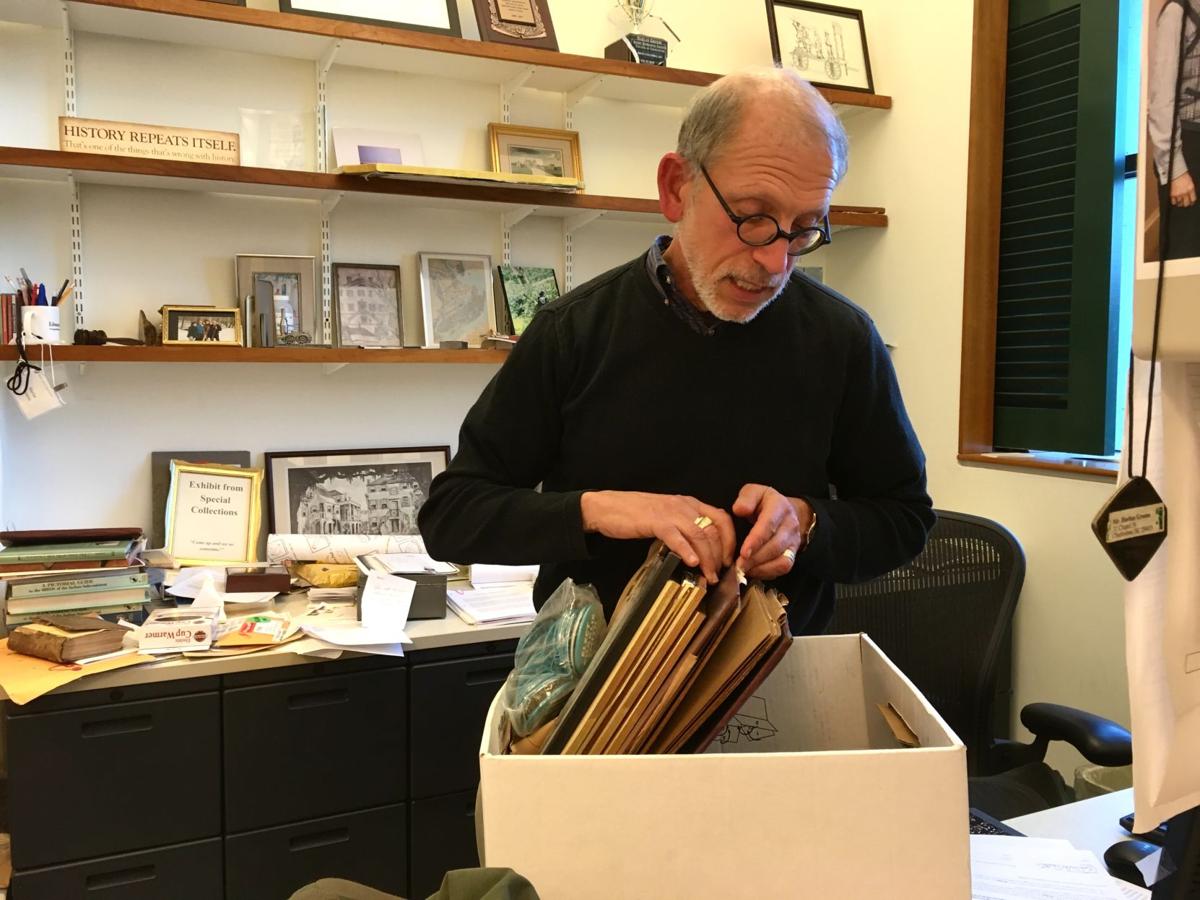 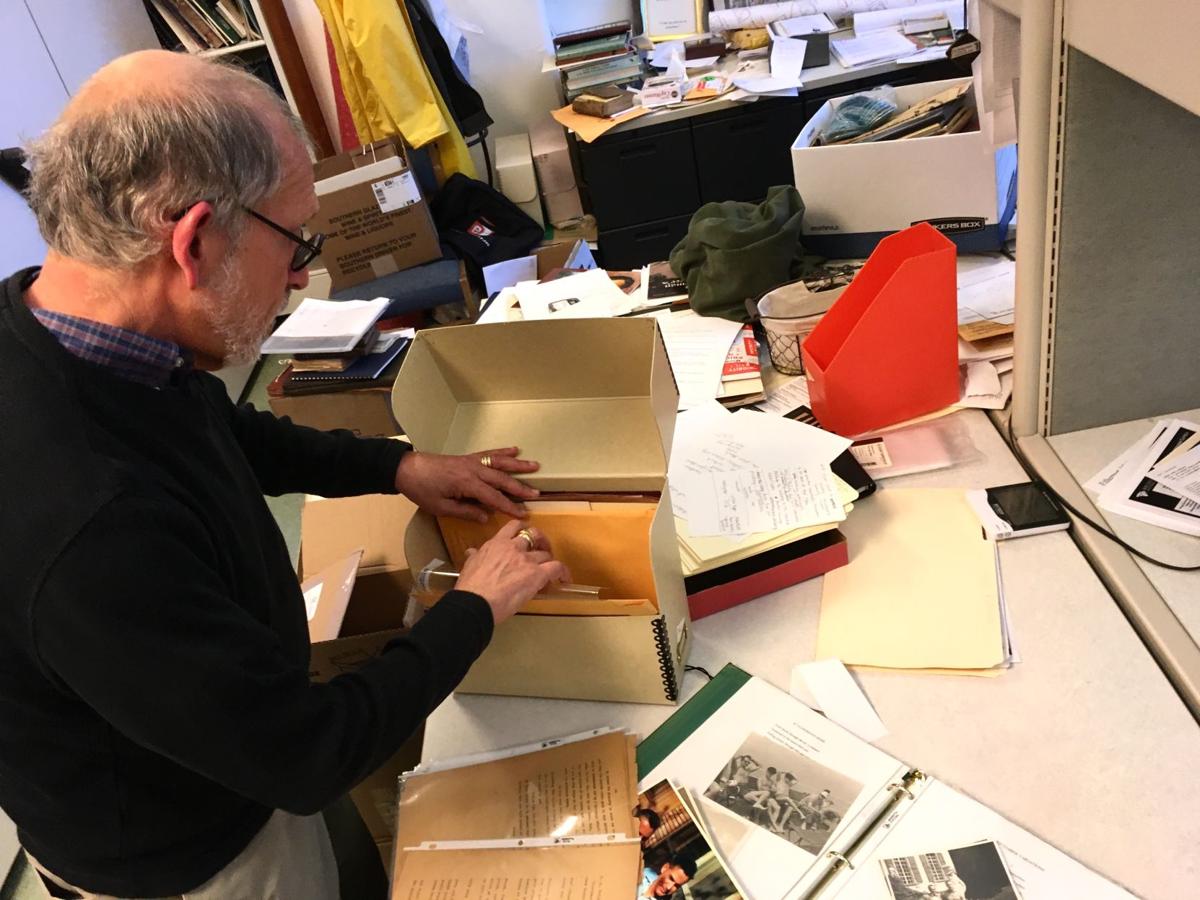 The LGBTQ collection at the College of Charleston is one of many such collections archived at universities and public institutions across the country. (Adam Parker/Staff)

Harlan Greene, head of special collections at the College of Charleston, has launched an LGBTQ archive project. (Adam Parker/Staff)

The LGBTQ collection at the College of Charleston is one of many such collections archived at universities and public institutions across the country. (Adam Parker/Staff)

Two years ago, a graduate student at the College of Charleston approached Harlan Greene at the Special Collections desk to request materials concerning Charleston’s LGBTQ history. Greene, who is gay, was taken aback.

“It’s happened,” he thought. “A student has walked in and assumed the collection library would have such materials. The student was not gay. It’s just a topic of study.”

It was a watershed moment for Greene, and it provided welcomed encouragement, he said. He had been quietly collecting papers, photographs, books, objects and more for a few years, starting an LGBTQ collection unprompted and unfunded. And now that work was paying off.

“That really goosed me further,” he said. “Yes, this was a priority, otherwise we would have had to turn the student away.”

Greene became her dissertation adviser, and the work she produced is archived at the College of Charleston.

The LGBTQ archive project just got an enormous boost in the form of a $200,000 Dorothy and Gaylord Donnelley Foundation grant, the largest awarded this period. The project is receiving support from the college’s library dean, John White, and is modeled after the school’s enviable Jewish Heritage Collection and African-American archives, both of which the college has funded.

The LGBTQ project has two parts, an oral history initiative and an effort to accumulate documentation on gay history in the Lowcountry, Greene said. Among the materials Greene has acquired so far are the papers of philanthropist Linda Ketner, realtor and gay rights activist Charlie Smith, the Metropolitan Community Church, poet-philanthropist John Ziegler, and the advocacy group Alliance for Full Acceptance.

The oral history initiative will be spearheaded by Greene’s colleagues, Beth Sundstrom, director of the Women’s Health Research Team at the college, and Cara Delay, who also is part of the team. They will put their students to work identifying interview subjects and gathering materials.

The history is much richer than most people realize, Greene said. Gay life in the 19th century and first part of the 20th century, though largely hidden away, was replete with fascinating figures and interesting episodes. He has materials that date back to the 1850s, he said, including documentation about a gay brothel that entertained both blacks and whites during the Jim Crow period.

The 1960s signaled the start of a broader openness, though it was the AIDS epidemic of the 1980s that triggered activism in South Carolina. Since then, the fight for LGBTQ equality has gained momentum. In November 2014, South Carolina became the 35th state to recognize the legality of same-sex marriage.

More than two years ago, Greene and Sandy Slater launched a website called "The Real Rainbow Row: Charleston's Queer History," the college's first official public foray into the topic. Greene said treating gay history with the respect it deserves helps foster a gay-friendly environment which, in turn, can boost tourism. A local walking tour company has used information from the site, he noted, and Belmond Charleston Place hotel has hosted a group of gay journalists.

Sheila Morris, a Columbia resident and editor of the newly published “Southern Perspectives on the Queer Movement,” said much of the literature highlights activities in New York City, where the gay rights movement started with the Stonewall Riots, and in San Francisco, which long has included an LGBTQ enclave and which was the epicenter of the AIDS crisis.

Now it’s time to fill in the middle, she said.

The AIDS epidemic was far-reaching, Morris said. Many in the South lost loved ones.

“While that was a devastating situation, it was also a springboard for organization in South Carolina,” she said.

The 1993 march for equality in Washington, D.C., further energized the gay rights movement, she said.

“There was a huge delegation from South Carolina that went to that march,” Morris recalled. “As a group, we were overwhelmed at how many people.” While little progress was made with Congress, the event provided the impetus to work harder at home, she said.

Morris and her wife Theresa have donated their personal papers, photographs and other materials to the Caroliniana Library at the University of South Carolina, which has maintained an LGBTQ collection for many years, she said.

It was started by student Santi Thompson, who now is a librarian at the University of Houston, according to USC archivist Elizabeth West. The collection today consists of more than 35 cartons of material, much of it focused on the state’s gay and lesbian pride movement.

“We’re a little behind the times,” admitted John White, dean of libraries at the College of Charleston. But it’s never too late to make the college collections more inclusive.

“The role of our archive is to document the history and culture of the region,” he said. “It’s impossible to do that if you leave certain groups out.”

Since many courses at the college deal with issues of gender, identity, religion, discrimination, public policy and more, the LGBT archive project “fits very well with the curricular mission (of the school),” White added. “Harlan deserves 100 percent of the credit. It’s been a passion project of his as long as I’ve known him, and I’ve known him almost 20 years.”

Kerri Forrest, Lowcountry program director for the Donnelley Foundation, said her organization supports institutional collections largely because of the love Dorothy and Gaylord Donnelley had for books, prints and history.

“This is a key representation of the at-risk collection program work that we strive to do,” she said. “It wasn’t hard to convince the board (to support the project) because this is something we see as an underrepresented story that needed to be brought to light, and the foundation wanted to be catalytic in bringing different stories to light.”

Another “at-risk collection” receiving support from the foundation is Claflin University’s archive of pictures by Orangburg photographer Cecil Williams, who made numerous images of the civil rights episodes in the state, including the Orangeburg Massacre.

Linda Ketner, a local philanthropist and gay rights advocate, announced Wednesday that she would match donations to the College of Charleston LGBTQ archive project up to $25,000.

“Growing up LGBTQ, particularly in the South, was a lonely, frightening, shaming kind of journey, and to a great extent I think it still is in many parts of South Carolina,” she said. “And if young people can learn from some of us who have gone through those experiences, it might help them, it might even save lives.”

That’s why she’s supporting the project, she said.

Making this collection available to students, and to the general public, also can help parents of gay and lesbian children who are coping with the loneliness and uncertainty that often manifests, she said.

“Other minorities have support from their families, community and church, but LGBT people generally don’t,” Ketner said. “It’s a solo journey. You tend to internalize and suck up all those negative messages that come from the playground and politics.”

She recalled riding her bike to the public library when she was 12 to read books about homosexuality that she discretely covered with a copy of “Robinson Crusoe.”

“It was all negative stuff,” she said. “At that time the FBI thought homosexuality was dangerous. Psychiatrists thought it was a mental illness.”

The ordeals and perspectives of LGBTQ people are an important part of history that can help us better understand the gay experience, as well as society’s attitudes toward it, Ketner said.

“Now what I’m imagining is a 12-year-old in Seneca going to the College of Charleston archives and getting an entirely different message than what I got going to the public library.”

WHAT: Book presentation by Sheila R. Morris, editor of "Southern Perspectives on the Queer Movement"