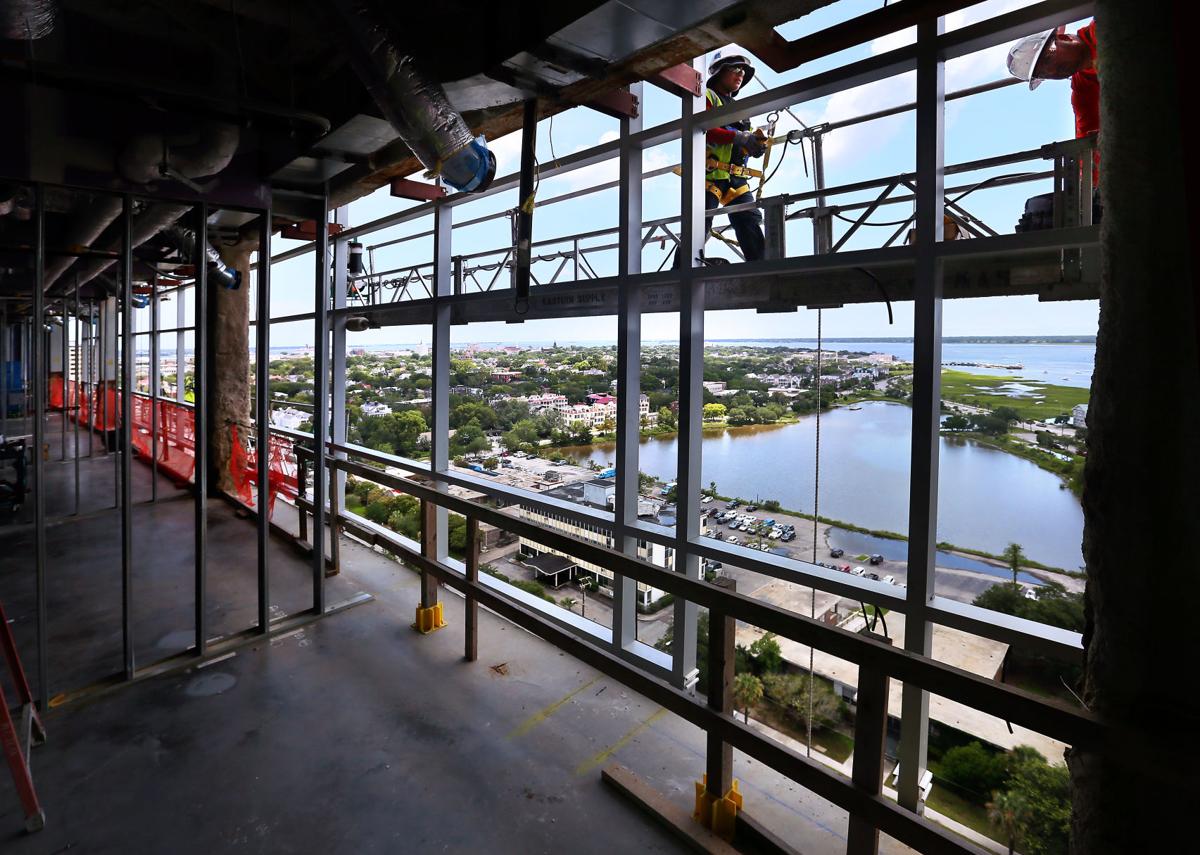 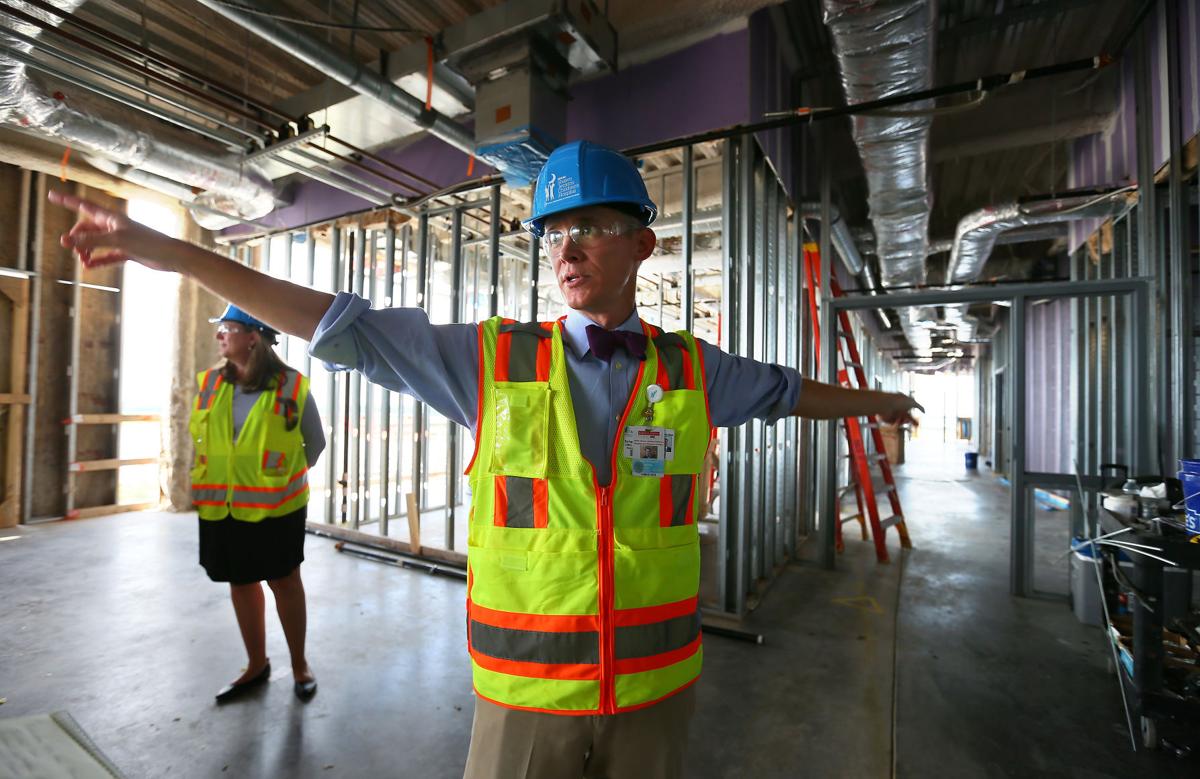 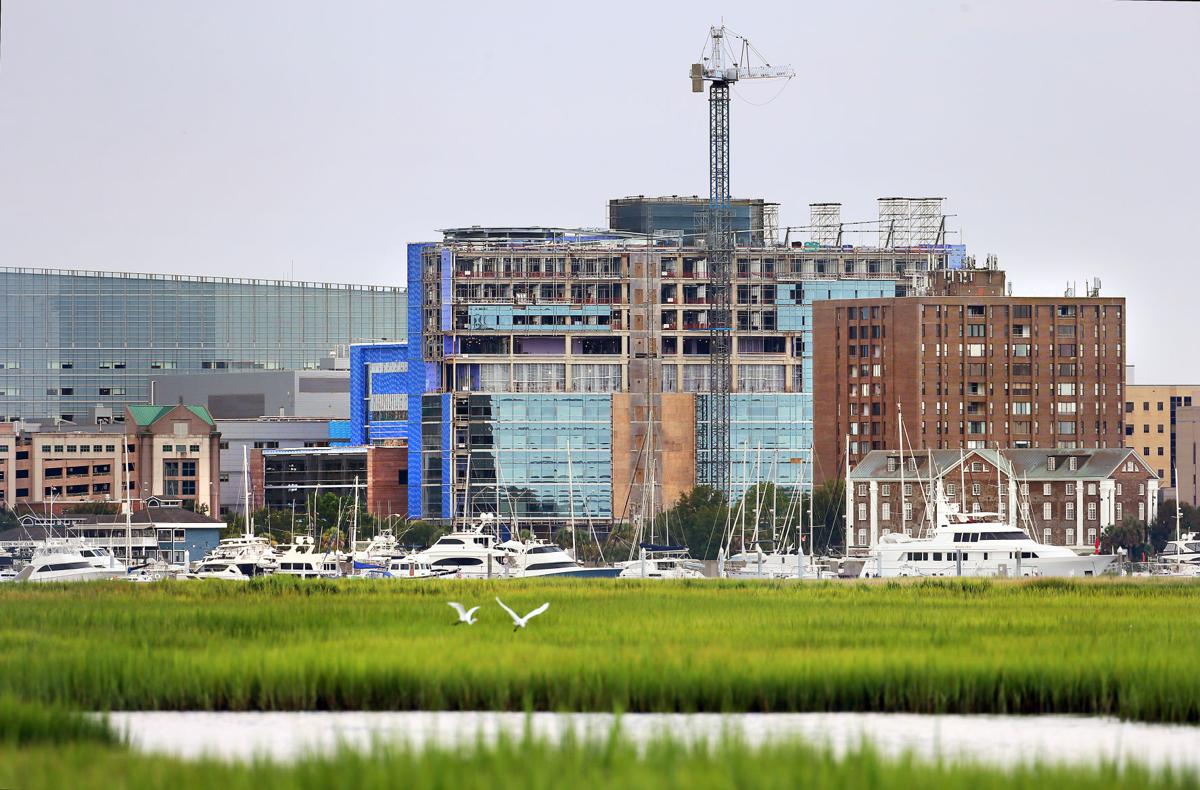 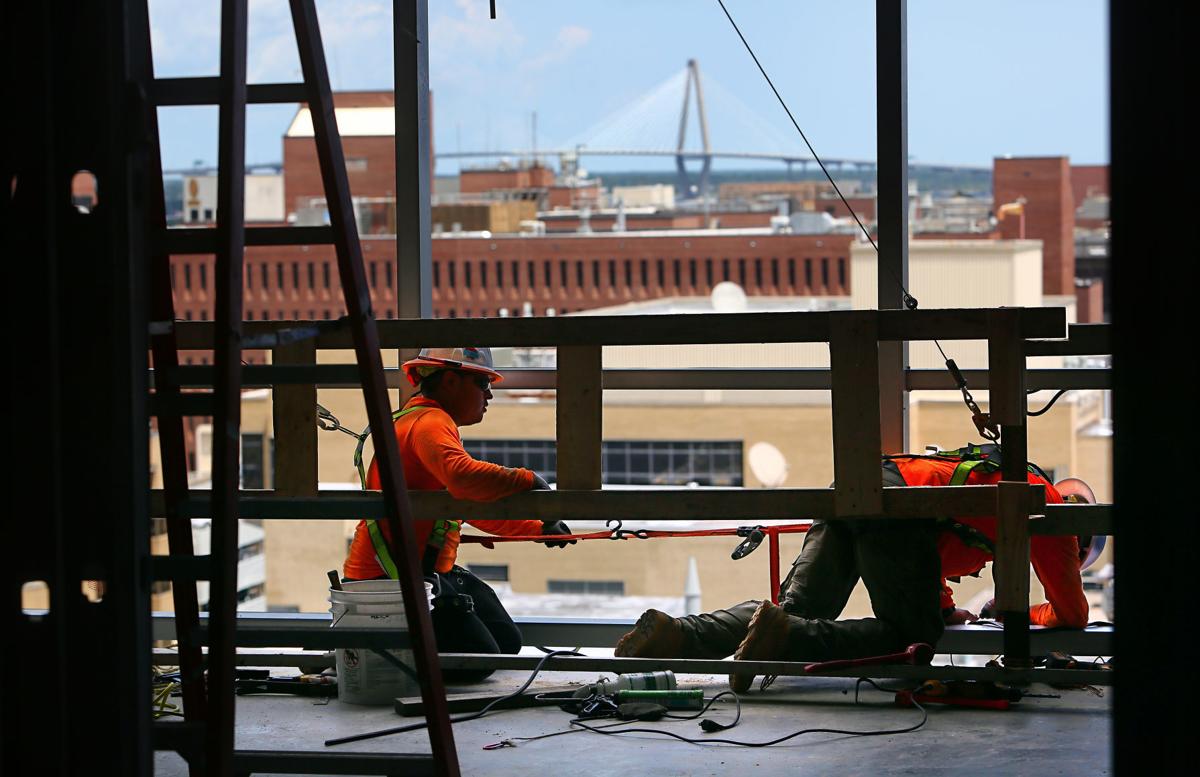 Workers are harnessed high above the ground during construction of the MUSC Shawn Jenkins Children's Hospital — with the Ravenel Bridge in the background — on Monday, August 6, 2018. Wade Spees/Staff 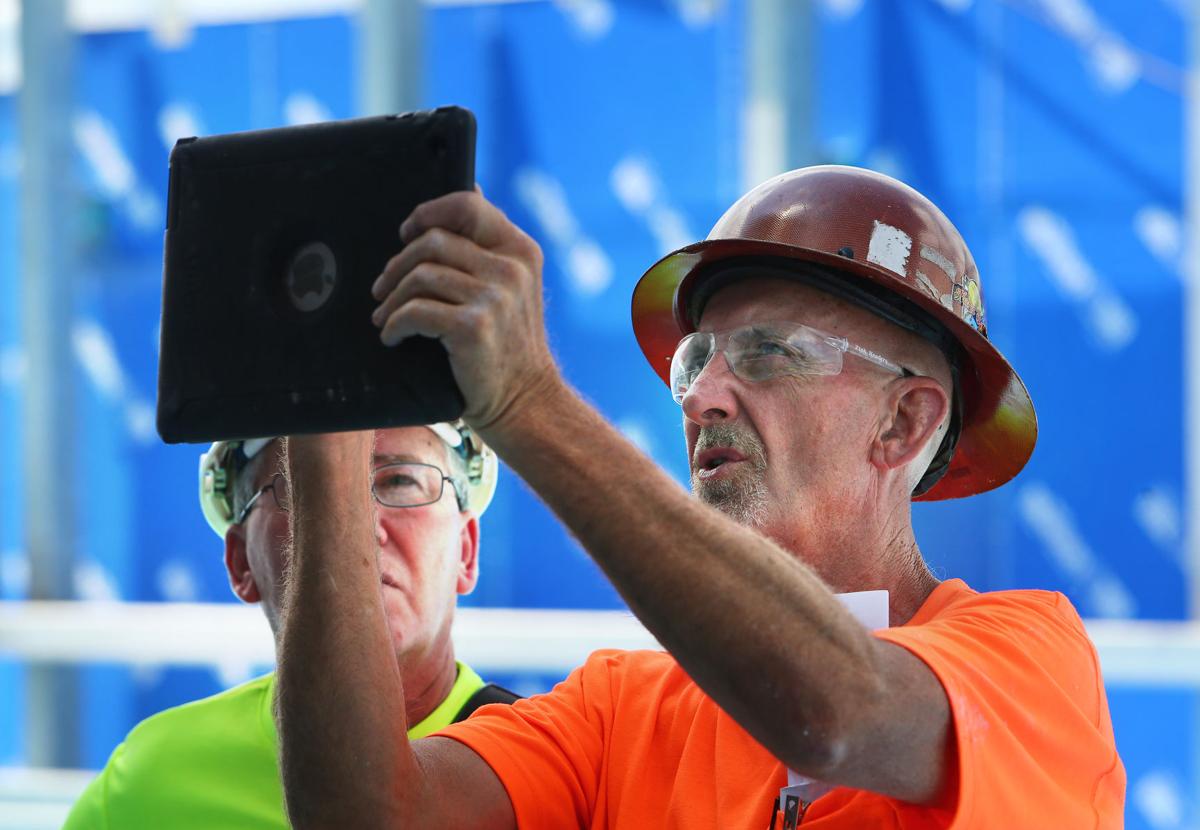 Richard Sellars (right) and Lindy Miles check the placement of metal studs on Monday, August 6, 2018. The MUSC Shawn Jenkins Children's Hospital will cost an estimated $389 million to build and is scheduled to open next year. Wade Spees/Staff

Workers are harnessed high above the ground during construction of the MUSC Shawn Jenkins Children's Hospital — with the Ravenel Bridge in the background — on Monday, August 6, 2018. Wade Spees/Staff

Richard Sellars (right) and Lindy Miles check the placement of metal studs on Monday, August 6, 2018. The MUSC Shawn Jenkins Children's Hospital will cost an estimated $389 million to build and is scheduled to open next year. Wade Spees/Staff

The Medical University of South Carolina's new front porch might be more impressive than those overlooking the Charleston Harbor on the Battery.

And hospital leaders want that front porch to be even more welcoming. It's seven stories up, offering an unbeatable view of the lower peninsula.

At the new MUSC Shawn Jenkins Children's Hospital, which is approximately one year out from its grand opening and will cost nearly $400 million by the time it's finished, system leaders imagine mothers, children and their families will eat meals on the 7th floor bought at the nearby cafeteria. The space has been designed to allow them to take a brief respite from what's happening in their lives to warrant a visit to the hospital.

That's the message hospital leaders are sending the community: The new hospital may be the most state-of-the-art in the region, capable of caring for South Carolina's sickest and most vulnerable children, but architects have also kept the families' experience in mind.

"This will be the most cutting edge, technologically compassionate hospital in South Carolina," said Dr. Pat Cawley, CEO of Medical University Hospital. "There will be nothing else like it."

MUSC Children's Hospital isn't the only one of its kind in the state, but other children's hospitals in Columbia, Greenville and Florence are considerably smaller. MUSC Children's is also unique because it offers a handful of exclusive specialties. It has the only pediatric burn unit, the only Level I trauma center for children and the only solid-organ and bone marrow transplant programs in the state.

That's why children from the Upstate, from the Midlands and beyond often end up in Charleston for care.

But the existing children's hospital, located on the Ashley Avenue Horseshoe, was built more than 30 years ago. It's small, and not laid out for today's standards, hospital administrators explained. They have long argued that constructing a new building is necessary.

"We can't create the standards and expectations of care in our current space," said Dr. Mark Scheurer, a pediatric cardiologist and chief medical officer for the new facility.

The new building, located at the corner of Calhoun Street and Courtenay Drive, will mirror the look of MUSC's Ashley River Tower, which opened 10 years ago. At nearly 200 feet tall, the new children's hospital will rival the height of Charleston's tallest church spires.

For now, it's still a construction site. But once complete, there will a whole floor dedicated to children with cancer. Another floor will house a maternity ward. The private rooms in the new intensive care unit will be roughly three times the size of the rooms in the existing children's hospital.

Leaders are also proud to point out the "couplet" rooms, which will host both mothers and babies together. Right now, babies born with complications are often separated from their mothers and kept in a different section of the hospital.

Each of the roughly 250 patient beds will be located near a monitor, which will allow patients and families to access both medical records and their Netflix accounts.

And a jewel for the new hospital will be a garden and atrium, funded in part with a $5 million donation from philanthropist Anita Zucker and her family. Replacing the current children's hospital atrium, the skeleton of a theater is already standing. The football field-size outdoor space will have a yard and private swings overlooking the Ashley River. Like the 7th floor gathering space, it is meant to be a relaxing reprieve from medicine and procedures.

The hospital's construction has been funded with a $25 million down-payment from the state, and another $25 million from Benefitfocus founder Shawn Jenkins, a prominent technology entrepreneur in the area. MUSC has received $72.3 million in private donations for the construction following the initial gift. The institution used a federal program for financing as well. Cawley said beyond that, giving the project the go-ahead was "no more complicated than buying a house." He just had to give his signature more times.

Twenty-six planing teams, each of which included a mix of clinical leaders, doctors, nurses and family members, have designed the new hospital's features, Scheurer said. Alabama-based Robins & Morton was contracted to construct the hospital. The building was designed by Perkins+Will, a global architecture firm.

While the new building will solve some of the existing overcrowding, downtown flooding may continue to plague both patients and providers.

Other than the Ralph H. Johnson VA Medical Center, MUSC is the region's only hospital system that is almost solely based in the city's downtown hospital district.

Major flooding in October 2015 caused the hospital to shut down four of its operating rooms. Almost 200 surgical cases were canceled. Last year, a tropical storm forced doctors and staff to arrive at the hospital in boats.

While hospital leaders are making plans to expand MUSC's footprint outside the peninsula, Cawley said he doesn't regret building the new children's hospital in the flood-prone medical district.

It's important all the major medical services remain downtown, he said, and adult and children's services need to be convenient to one another, he said.

Drainage fixes to ease problems caused by flooding are on the way.

A new deep-tunnel drainage system under construction now along Septima P. Clark Parkway should help dry out the city's medical district during major floods once it's completed in 2023. And the project expected to bring the most relief to the district is the Calhoun-West project, which still doesn't have a construction start date in sight.

Mayor John Tecklenburg said all this will take time, but everything is being done to protect the city's hospital district.

Tecklenburg said he wouldn't want to see the system ever move its base away from the peninsula. It's important the district stay together, he said.

"It all ties together and is an incredible long-term asset of our community and our local economy," he said.

Cawley said MUSC also plans to move the majority of pediatric outpatient visits to an ambulatory campus in North Charleston. It's a quarter-mile from the interstate, he said.

Editor's note: A previous version of this story was not clear about how MUSC funded the new children's hospital project. In addition to federal financing, a state contribution and a gift from Shawn Jenkins, MUSC has received $72.3 million in private philanthropy.

The Shawn Jenkins Children's Hospital, which will replace the current facility on the Medical University of South Carolina's horseshoe. Hospit…