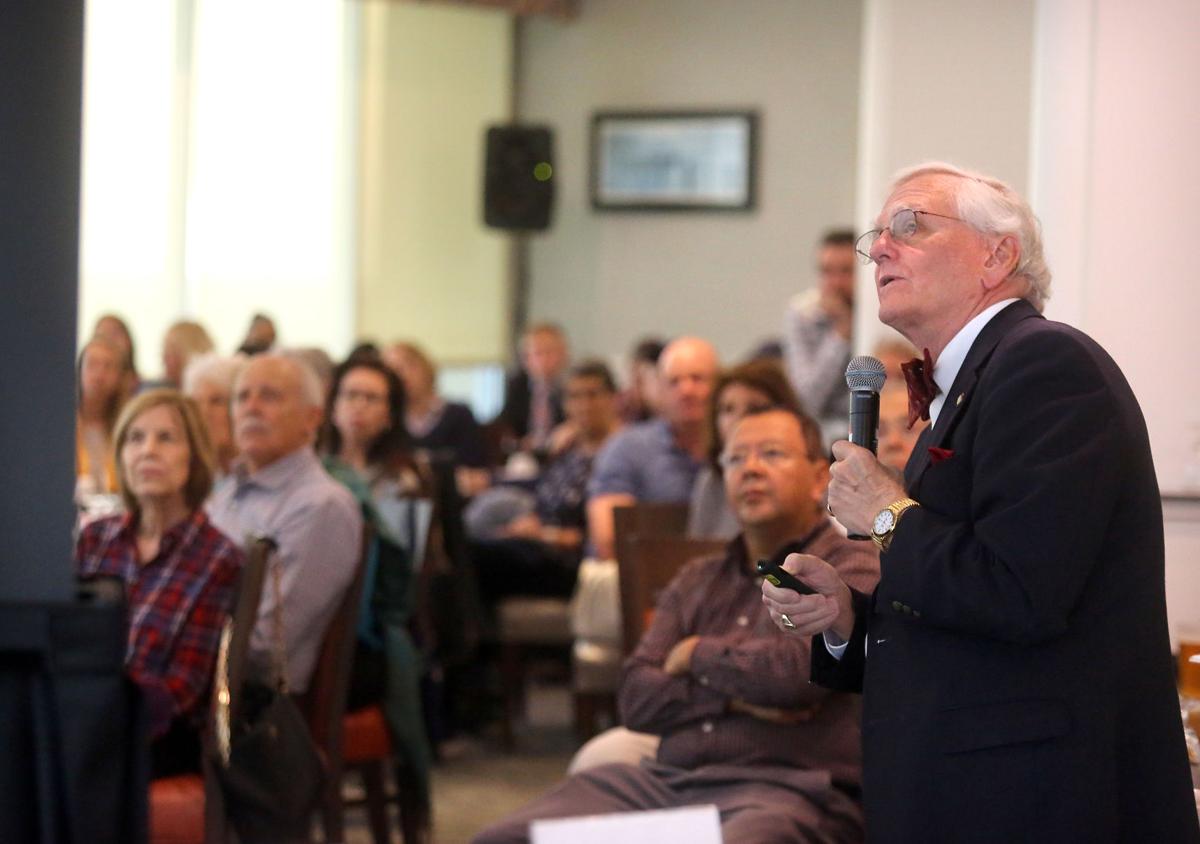 Once a month the Medical University of South Carolina hosts a Science Cafe. This month, on Tuesday, Feb. 11, 2020, Dr. Robert Ball, an infectious disease specialist at the MUSC, was the speaker and told Science Cafe attendees  that he believes the coronavirus outbreak has reached the level of a global pandemic. Brad Nettles/Staff 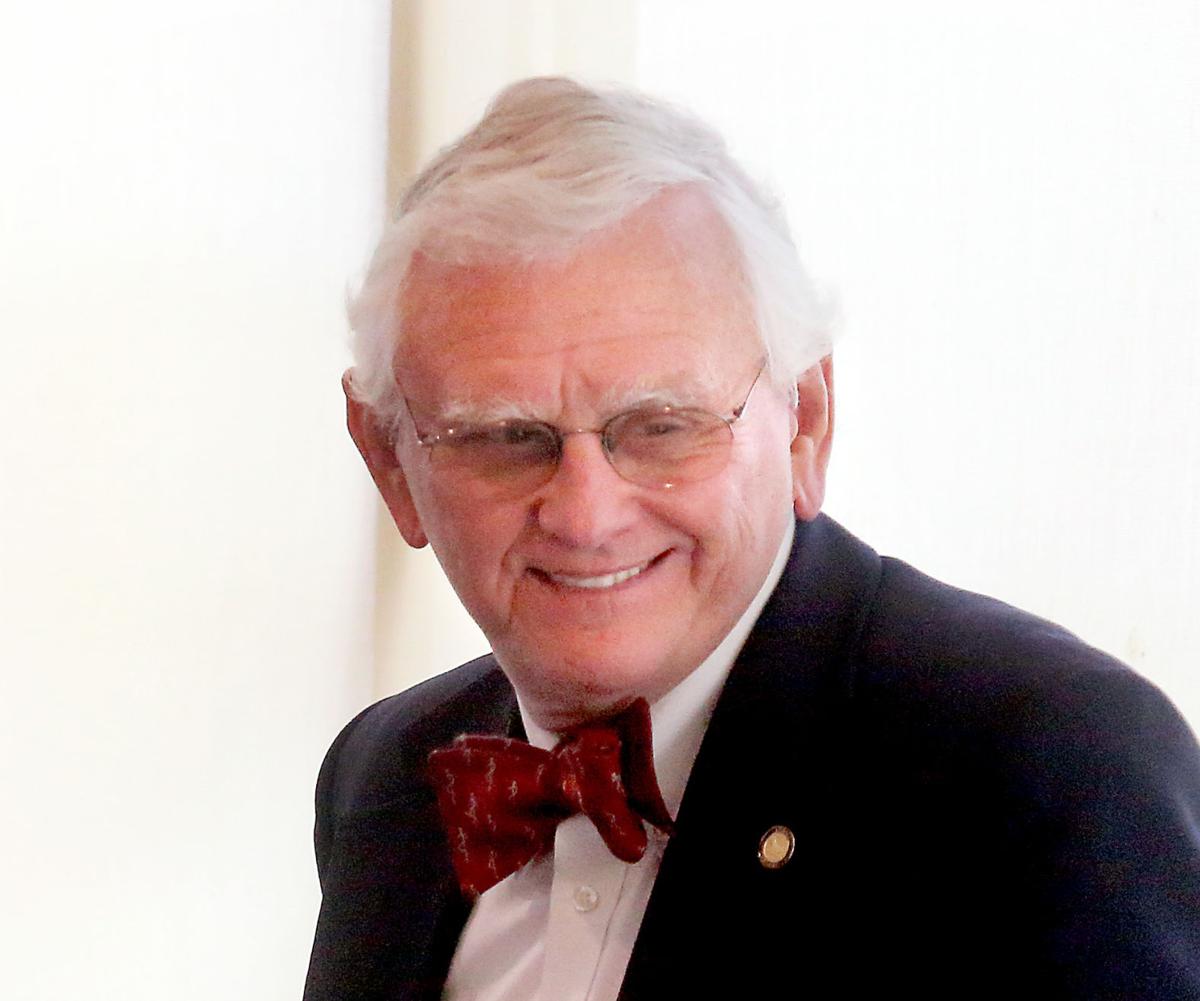 Dr. Robert Ball, an infectious disease specialist at the Medical University of South Carolina, explained to MUSC Science Cafe attendees that they should still be mindful of the influenza virus even though the coronavirus hasn't hit the state.   Tuesday, Feb. 11, 2020. Brad Nettles/Staff 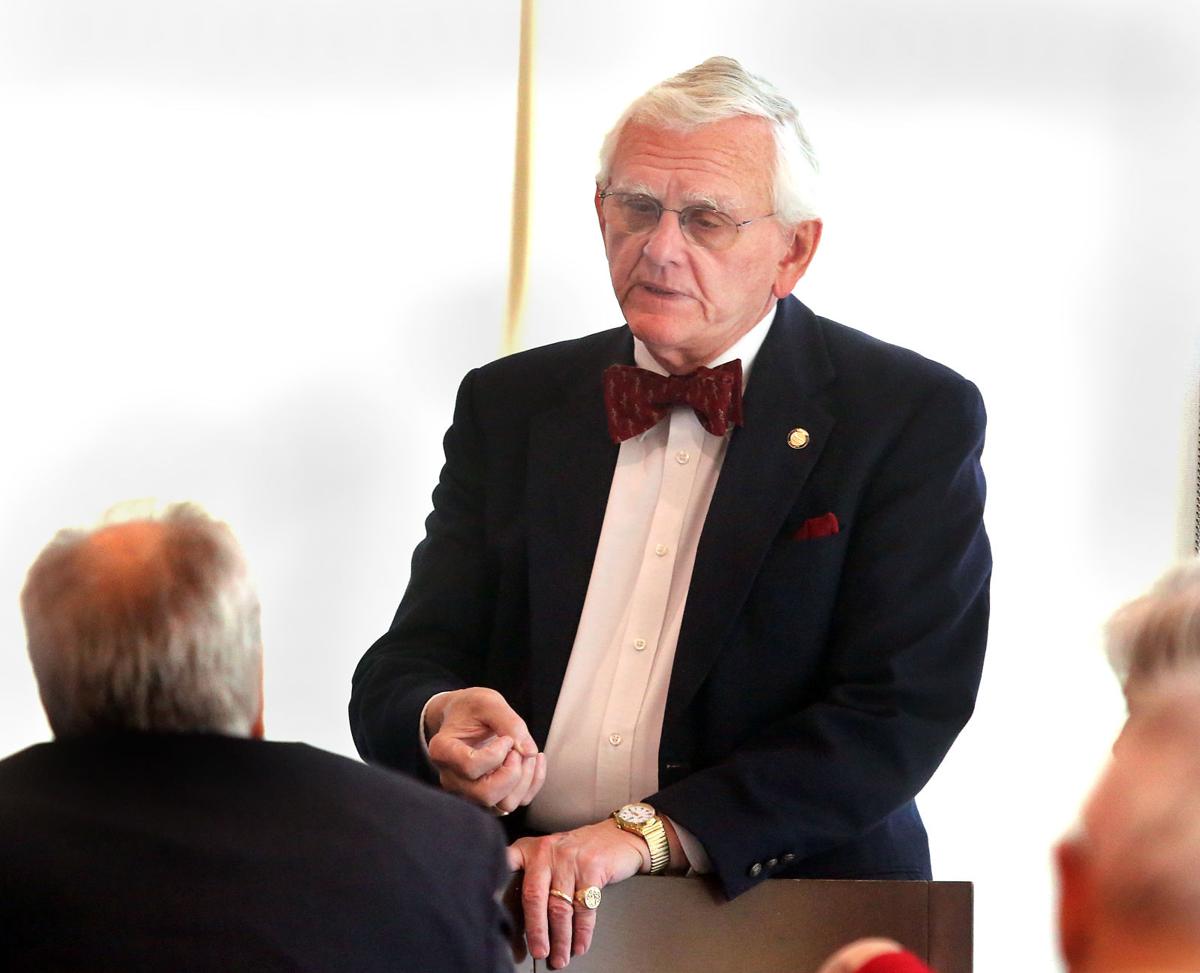 At the Medical Univeristy of South Carolina's Science Cafe this month, Dr. Robert Ball, an infectious disease specialist with MUSC, highlighted the anti-chinese sentiments that have emerged during the coronavirus outbreak. Tuesday, Feb. 11, 2020. Brad Nettles/Staff 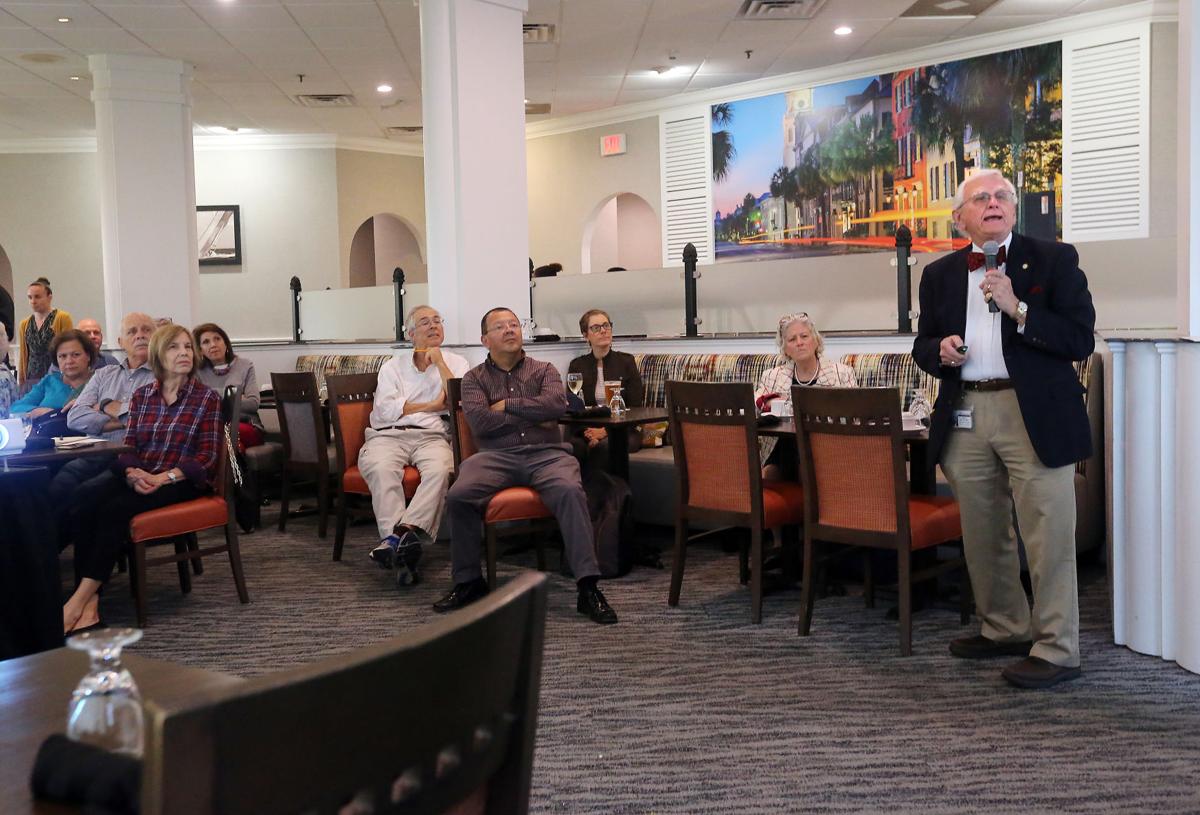 Dr. Robert Ball, a certified infectious disease specialist at the Medical University of South Carolina, said that South Carolina residents should not be worried or panicked about getting the coronavirus. Tuesday, Feb. 11, 2020. Brad Nettles/Staff 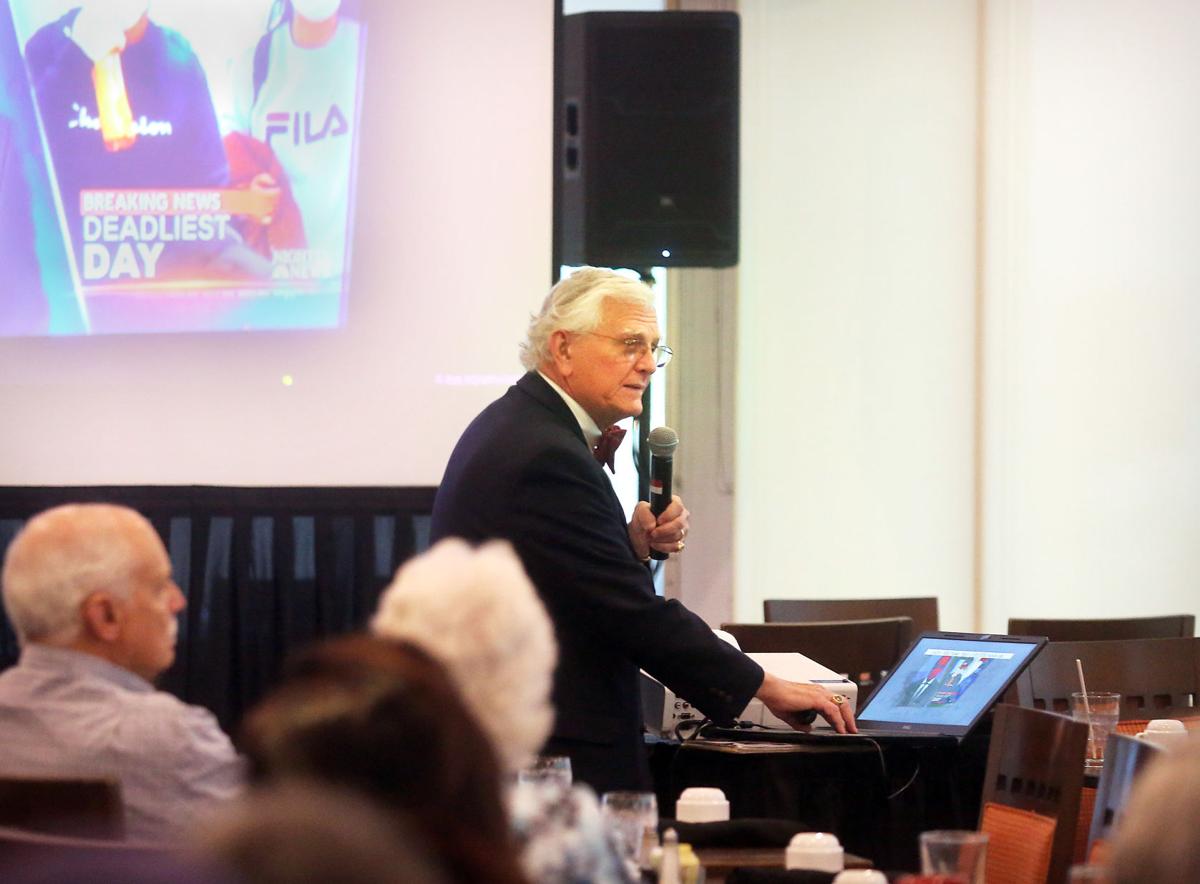 According to Dr. Robert Ball, a certified infectious disease specialist with the Medical University of South Carolina, symptoms of the coronavirus are similar to symptoms of the influenza virus. Tuesday, Feb. 11, 2020. Brad Nettles/Staff

Once a month the Medical University of South Carolina hosts a Science Cafe. This month, on Tuesday, Feb. 11, 2020, Dr. Robert Ball, an infectious disease specialist at the MUSC, was the speaker and told Science Cafe attendees  that he believes the coronavirus outbreak has reached the level of a global pandemic. Brad Nettles/Staff

Dr. Robert Ball, an infectious disease specialist at the Medical University of South Carolina, explained to MUSC Science Cafe attendees that they should still be mindful of the influenza virus even though the coronavirus hasn't hit the state.   Tuesday, Feb. 11, 2020. Brad Nettles/Staff

According to Dr. Robert Ball, a certified infectious disease specialist with the Medical University of South Carolina, symptoms of the coronavirus are similar to symptoms of the influenza virus. Tuesday, Feb. 11, 2020. Brad Nettles/Staff

The top floor of the Charleston-Riverview Holiday Inn was packed on a Tuesday night with researchers and local Charleston residents, all talking about the 2019 novel coronavirus.

Residents asked questions to get a better understanding of the epidemic, and researchers attempted to translate a complicated topic into something everyone could understand.

"I've been getting on Facebook, it's all myths ... so I just wanted to get the facts," said Langhorne Howard, a Charleston resident who saw a notice about the public event.

This program was a part the Medical University of South Carolina's ongoing Science Cafe Series, a monthly gathering that is geared toward connecting the Lowcountry's general public to experts at MUSC.

This month, the series invited Dr. Robert Ball, a researcher and certified infectious disease specialist, to provide a presentation further detailing what residents should know about the coronavirus.

Since the virus appeared in the city of Wuhan, China, in December, there have been more than 45,000 confirmed cases of the virus and more than 1,000 deaths globally as a result of the virus, according to the World Health Organization. Most of the cases and deaths have been in China.

There are currently more than 10 confirmed cases of the virus in the U.S. in Washington, Arizona, California, Wisconsin, Illinois and Massachusetts. The Centers for Disease Control and Prevention expects that more cases of the virus will appear in the coming days, which is part of the reason why Ball was asked to present on the virus.

"This is a physician of the community," said Loretta Lynch-Reichert, a director of research communications at MUSC. "That's kind of what the Science Cafe is all about."

Editorial: Here's what you can do to protect yourself from that deadly virus

How it got started

The series started five years ago when Lynch-Reichert and colleague Tara Pittman, a recruitment manager at South Carolina Clinical & Translational Research Institute, decided they wanted to bridge the connection between the public and the researchers they work with.

“We thought they should know what’s in their backyard," Lynch-Reichert said. “So Tara and I put our heads together.”

They said the series was modeled after the work the Johns Hopkins School of Medicine does with surrounding its Balitmore, Md., community. Their goal is to make a South Carolina equivalent with MUSC.

Since the Science Cafe's creation, the two have organized dozens of presentations that range from fatty liver disease to marijuana. They were initially hosting the series out of a small restaurant on the MUSC campus. Now, they've expanded to the Harborview Restaurant & Lounge.

“We talk about everything from cancer to stroke to diabetes to crazy things like the microbiome," Lynch-Reichert said.

Pittman works with researchers everyday who are trying to overcome obstacles, she said. The Science Cafe has been an opportunity for them to see why they do all the work that they do.

"They seem to really light up," Pittman said. “So I love that.”

The MUSC Science Cafes are hosted at the Holiday Inn Riverview Hotel restaurant at 5:30 p.m. The upcoming Science Cafe events include:

What separates them from Johns Hopkins, they said, is that South Carolina has a lot more rural communities. So the health care conversation is different.

But Pittman noted that's also why the Science Cafe is needed. Through the sessions, residents get a better understanding of the type of research that is going on at MUSC, she said. For those individuals who have participated in past research studies, she said they sometimes get to see the end results of those studies by attending the programs.

They also become more informed individuals with more awareness about health needs. For example, Pittman said she remembers when they had a program on obesity and the importance of making good food choices.

People who attended the conversation pointed out that some communities in the state don't even have access to a supermarket.

“It makes them stronger community members, it makes our state healthier," Pittman said.

At the most recent program this month, Dr. Ball gave attendees a full and brief breakdown of the coronavirus.

One of the first things he did was reassure the public that South Carolina hasn't reached a point where there needs to be a panic.

"You don't need to go around wearing masks ... unless you're in China," he said.

But he wanted to make sure people at least kept up with what's going on with the virus to avoid misinformation. He also wanted to remind them that the flu is still a very real threat.

According to the state Department of Health and Environmental Control, there have been nearly 70 flu-related deaths in South Carolina and nearly 4,000 confirmed cases of the virus this flu season.

When further questioned about coronavirus symptoms, Ball said that once a person has their first symptom appear, they are definitely infectious.

"And you're infectious for days," he said.

With the flu, he said a person is infectious the day before symptoms appear. With the coronavirus, he said, that has not been officially determined.

Ball then took time to detail why the coronavirus is a huge global concern, even though there is not the need for immediate alarm in South Carolina. Some officials are still referring to the coronavirus outbreak as an epidemic. Ball believes it has gone beyond an epidemic level.

He said some experts compared it to trying to stop the flu from going around the world. The virus is not contained and is spreading pretty rapidly, he said.

"We are just a few weeks into what is a global pandemic," he said. "We're early in this."

Ball even took time to address the anti-Chinese sentiments that have emerged since the outbreak was announced to further inform guests.

Lynch-Reichert said she and Pittman hope to one day expand the program throughout the entire state. Right now, they are limited to the Charleston area. But she knows there are people who are yearning for a program like this.

"I love learning about science and what they're doing," said Bob Richards, a Summerville resident and a regular attendee of the Science Cafe. "I find it very interesting."

“They come because they have a thirst for knowledge. ... We just want to reach more people," Lynch-Reichert said.