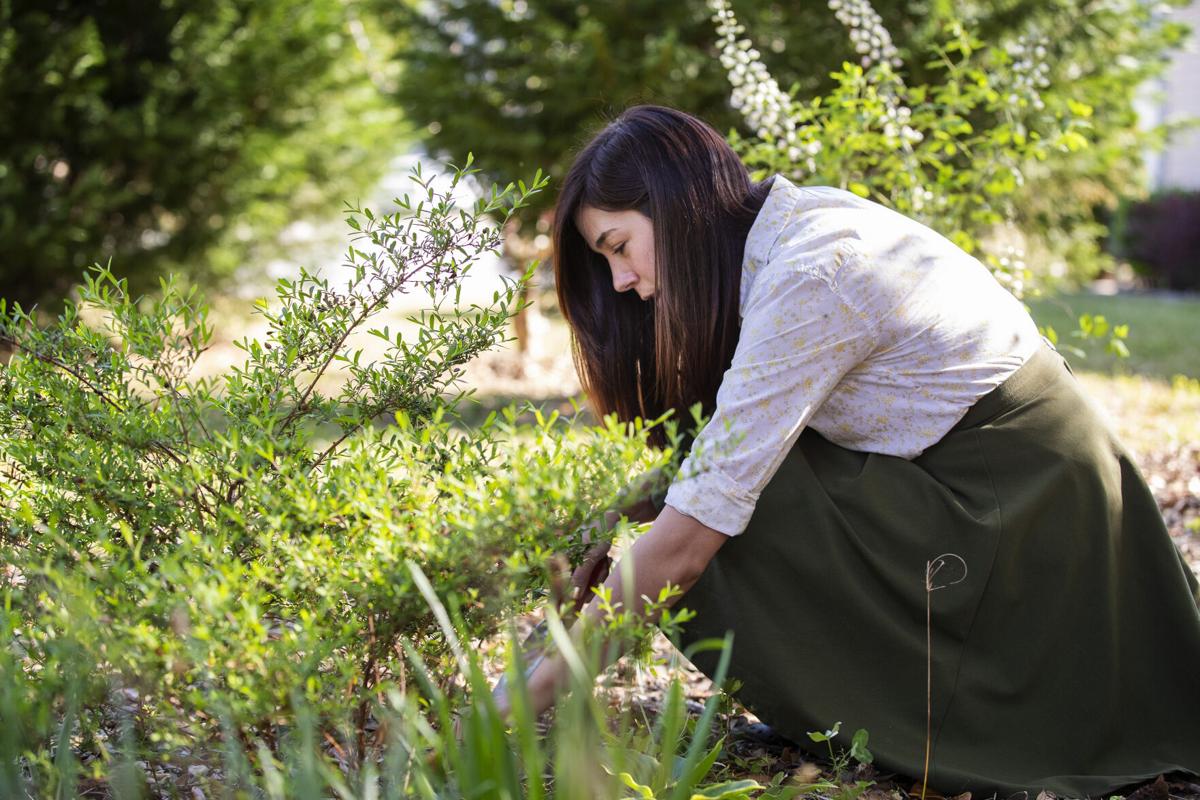 Laura Lewis pulls liriope, an invasive plant, out of her garden in Mount Pleasant on Tuesday, April 13, 2021. Lewis has committed to planting mostly native plants in her garden, which has been certified as a wildlife habitat by the National Wildlife Federation. Lauren Petracca/Staff 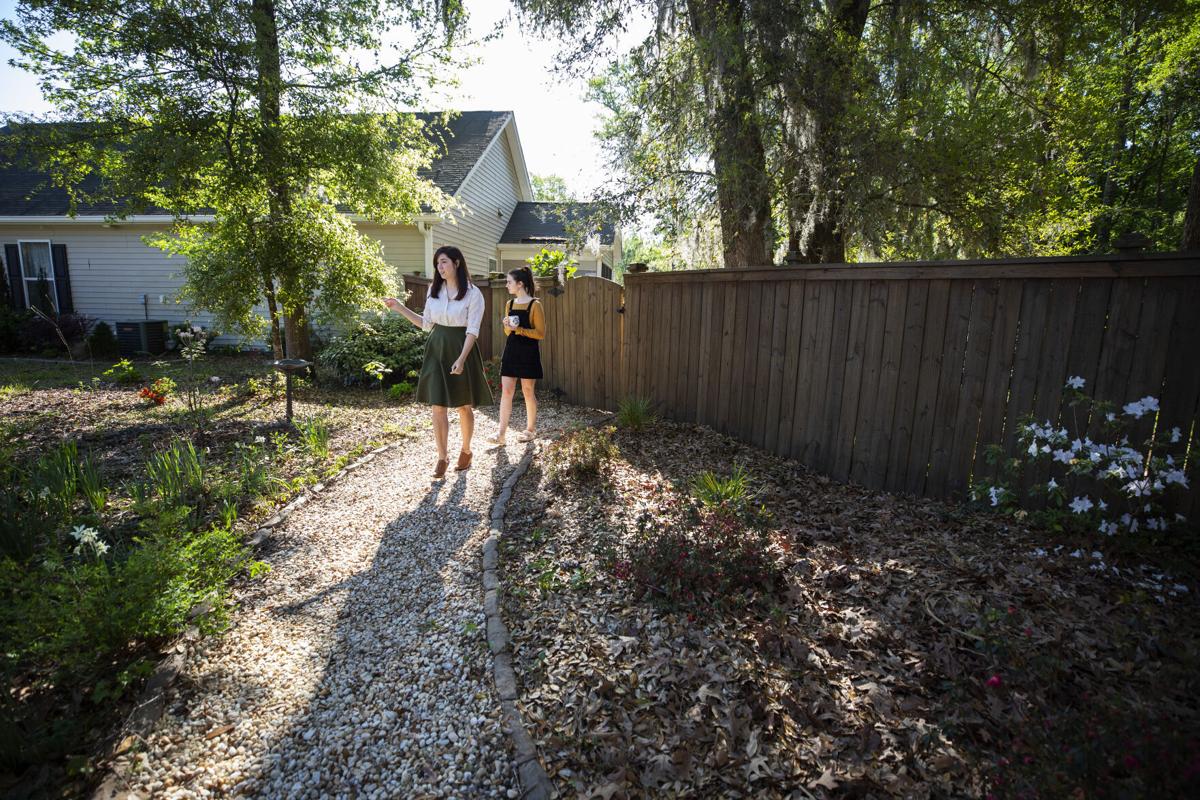 Laura Lewis (left) walks through her garden with Mary Royce, a former student, at her home in Mount Pleasant on Tuesday, April 13, 2021. Lauren Petracca/Staff 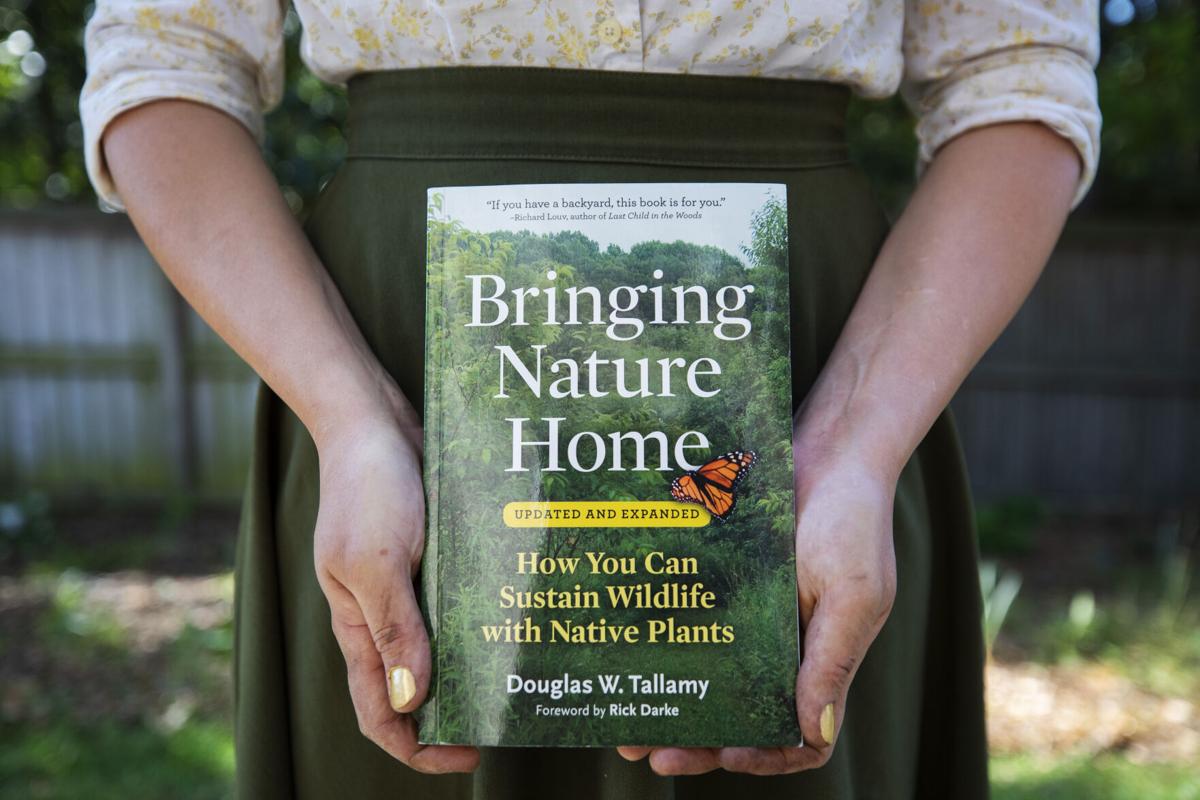 Laura Lewis holds the book, “Bringing Nature Home,” by Douglas W. Tallamy, which she read in 2019 and was inspired her to work with native plants in her garden, on Tuesday, April 13, 2021. “Reading that book was a call to action that really led me to dedicate as much time and energy as I could to restoring wildlife habitat through my garden,” she said. Lauren Petracca/Staff 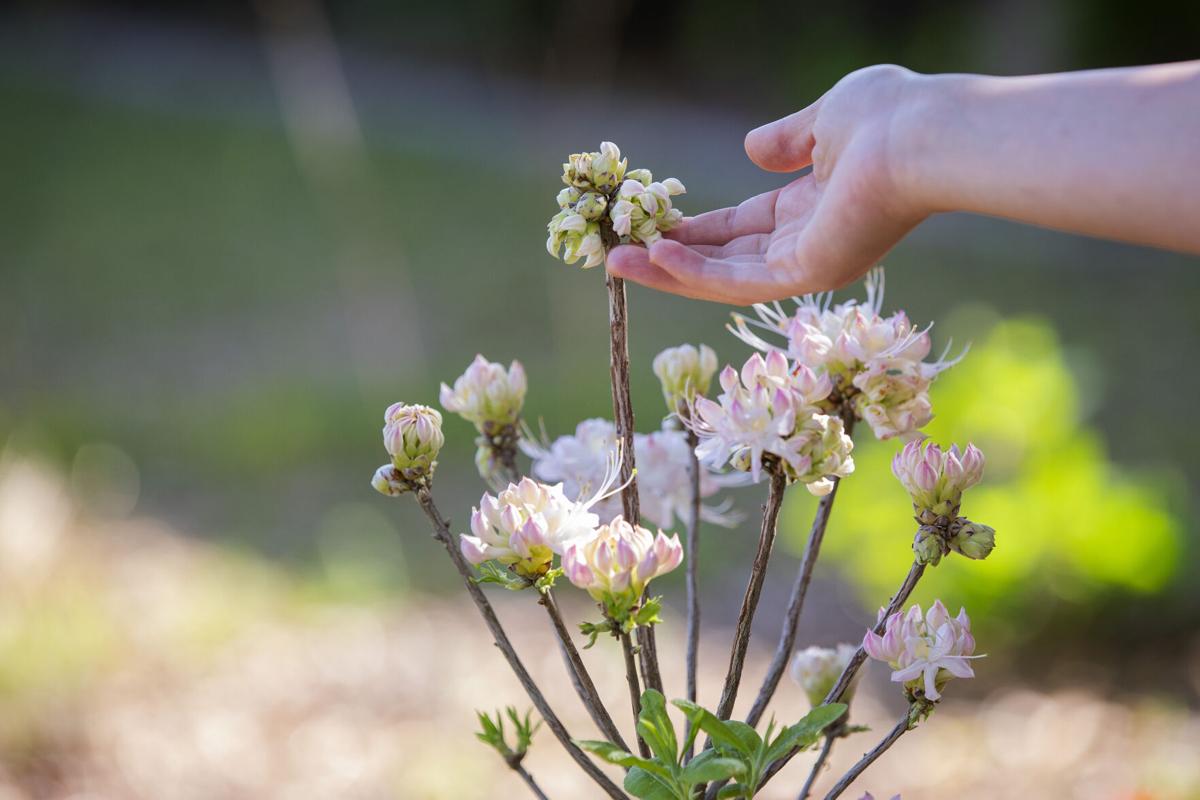 Laura Lewis points out the native azaleas growing in her garden at her home in Mount Pleasant on Tuesday, April 13, 2021. “A lot of what we have in the garden now are babies that I’ve planted over the last year or so, but in five years I hope my garden, and the native plant movement, will be flourishing,” she said. Lauren Petracca/Staff 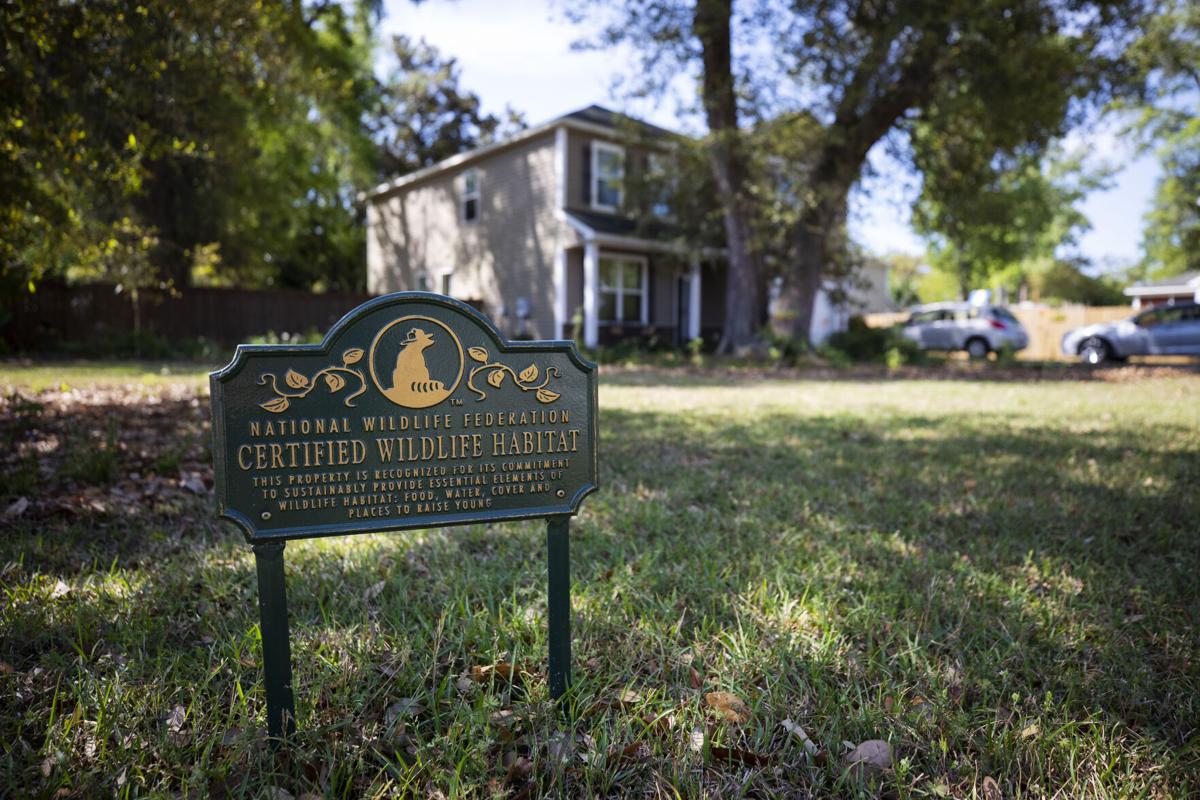 A plaque from the National Wildlife Federation, which designates Laura Lewis’ yard as a certified wildlife habitat, is pictured near her home in Mount Pleasant on Tuesday, April 13, 2021. Lauren Petracca/Staff

MOUNT PLEASANT — When most people think of a wildlife habitat, they probably imagine a zoo-like space with endangered animals of all sizes. They likely never imagine that a Lowcountry garden could be one.

"It's kind of my reason for gardening," said Mount Pleasant resident and former high school teacher Laura Lewis. "It is a continuing commitment."

Lewis' home garden has been certified by the National Wildlife Federation as a wildlife habitat. That designation not only comes with a special plaque but also the opportunity to commit to giving back to nature.

The recognition came as a result of her commitment to gardening only with plants native to the Lowcountry. It was a movement and style of gardening she was introduced to that has shaped her entire relationship with the practice.

"Gardening then became less of a hobby and more of a passion," she said.

Around five years ago, she and her husband moved into their current Mount Pleasant home. Before then, the couple had mainly lived in apartments.

So Lewis' relationship with gardening mainly involved potted plants. In their current home, she had a blank canvas. They lived near wetlands but she said she didn't see a lot of bugs or animal life.

She's currently in graduate school studying to become a therapist. Her initial goal was to plant things she thought would look nice in her yard, leading to a lot of trial and error. The plants she picked out were imported and didn't grow well in the Lowcountry environment.

"So I was really just dropping things in the ground," she said. "Rest in peace to those early plants."

It wasn't until she joined local gardening Facebook groups that she started to get a better idea of how to approach the practice. Someone in the group recommended she read Douglas Tallamy's "Bringing Nature Home."

Tallamy, an entomology and wildlife ecology professor with the University of Delaware, writes in the book about the relationship between local plants and insects.

Native plants support local insects, which support local birds and all of the wildlife up the food chain. In an interview with Smithsonian Magazine, Tallamy talked about how insects tend to be picky eaters.

“Ninety percent of the insects that eat plants can develop and reproduce only on the plants with which they share an evolutionary history,” Tallamy said.

For example, a monarch caterpillar only feeds on plants in the milkweed family.

It was this sort of information that Lewis said propelled her to go down the native plant route. She also said she enjoys not having to do as much extra work maintaining the plants since they are adapted to her sandy soil.

With plants such as native azaleas, she said she feels like she doesn't have to do the same amount of upkeep she would have to do if she used imported plants.

“That on a practical level is usually my pitch to gardeners," she said.

Getting her garden certified as a wildlife habitat was an objective she set for herself. To become certified, property owners must show that their land provides certain elements for wildlife.

They have to provide nesting areas, food and water sources all year. This includes items that local pollinators can take advantage of, as well fruits and nuts. Lewis said local plant businesses such as Roots and Shoots Nursery in West Ashley were a huge help in providing her with native plants.

She also doesn't use fertilizers and has rain gardens to filter water to meet additional NWF standards.

For the NWF to certify the yard, she had to score high enough on food, water, cover, places to raise young and sustainable practices. Those interested in learning how to get their property certified can go to www.nwf.org/certify to find a checklist and application.

It took Lewis a year to hit all of the targets that she needed to. In the past, she said there wasn't a lot of wildlife or movement in her yard. Now, after committing to the certification, she hears and sees more birds and bugs in her yard.

She has seen more and more people get into the practice of using native plants. Ideally, she hopes more people also consider  habitat certification to protect and support nature, especially with all of the development that's happening in the Lowcountry.

"It shows this yard is a little bit different," she said. “I’m hoping to generate a little curiosity.”