Jeff and Krystal Judy are the owners of Rustic Oaks Farm, a family farm and small business. The handcrafted knives made by Jeff are among the items they sell. Provided

Some of the items sold by Rustic Oaks Farm include goat's milk soap, soy candles and custom towels and mugs. The items are made by Krystal Judy, co-owner of the the farm. Provided

Jeff and Krystal Judy purchased their Cottageville land two years ago after moving out of Summerville to find more space for farming. Provided

Rustic Oaks Farm sells handcrafted knives as well items such as homemade candles and goat's milk soaps. Jeff Judy, co-owner of the farm, said his interest in knife-crafting starting when he first connected a blade to a deer antler he found. Provided 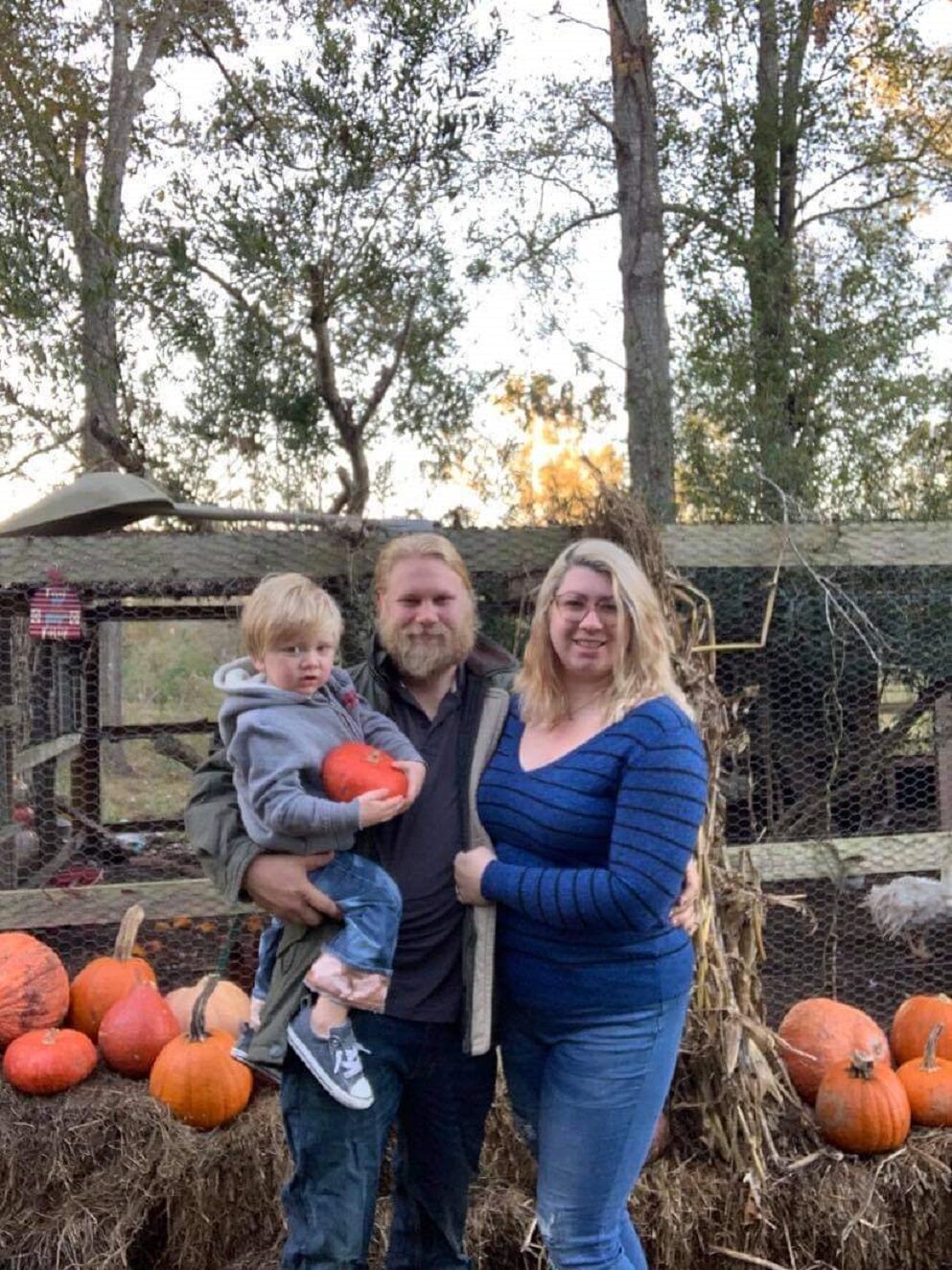 Jeff Judy Jr. and his wife, Krystal Judy, are the owners of Rustic Oaks Farm. They started the farm when Krystal was pregnant with their now-2-year-old son, Jeff Judy III. Provided

Jeff and Krystal Judy are the owners of Rustic Oaks Farm, a family farm and small business. The handcrafted knives made by Jeff are among the items they sell. Provided

Some of the items sold by Rustic Oaks Farm include goat's milk soap, soy candles and custom towels and mugs. The items are made by Krystal Judy, co-owner of the the farm. Provided

Jeff and Krystal Judy made the decision two years ago to move out of Summerville for a more spacious farm-centered life.

Today, the couple chase around their 2-year-old son while running a homemade rustic knife, soap and home-decor business.

"You can't have a forge that gets really hot in a rental property," Krystal said.

Jeff and Krystal are the owners of Rustic Oaks Farm, a small family farm in Cottageville. The farm includes a small flock of chickens, geese and a garden that has been full since summer.

While Krystal works at a local UPS office and Jeff works in construction, Rustic Oaks Farm started with Jeff's commitment to having a family farm. Eventually, they hope the income generated by their farm will allow them to be self-sufficient so they don't have to depend on other full-time work.

"That has been my plan for a long time," said Jeff, who grew up in the Bamberg area. “My first job when I was like 6 was tossing hay bales," he said.

That was for his uncle, who paid him $5 a day. He said his family has always had land and his  grandfather farms nearly 50 acres.

When the family was living in the Summerville area they were able to have some chickens and geese and a small garden in the backyard. But, Jeff said, they wanted something with more space where they could spread their wings as a family.

They're not alone. The 2017 Census of Agriculture, published by the federal government, found that while there are fewer farms overall, and farms across the country are earning less money, small farms are increasing.

The Judy family fits into the latter category.

Jeff sees himself as more of a homebody and enjoys being in a garden. The family eventually stumbled on their current Cottageville space around the time Krystal was pregnant with their son. "We have a garden right now bigger than our house," Jeff said.

The knife-crafting business started around the same time they purchased their home. It arose from Jeff's interest in knives, in general. He said he really got the push when he took a broken knife and put it together with a deer antler he found.

“He was kind of tinkering with it," Krystal said. “And then it kind of grew into actually making the actual knives.”

Jeff said customers sometimes approach him and say he must always be thinking about knives because of the different designs he comes up with.

And he agrees. He usually walks to his shop with the plan of coming up with new ideas.

But none of this would be possible without his wife, he said. Krystal helps by running the business website and social media accounts. She also makes the candle, soap and hand towel products.

The goat's milk soap making came a little after the knives started selling. Krystal said she didn't grow up on a farm like Jeff. But she did make soap with her mother when she was younger.

She chose goat's milk as a medium because it's softer on the body. "I hadn't done it in a long time," she said. "It seems to be doing pretty good."

The soy candles and custom hand towels have also been an opportunity for her to get creative, she said. She adds a variety oils and scents to the soaps and candles to give them unique fragrances. She said her son's favorite part is smelling the finished products.

For other families who want to get more involved in farming, Krystal says research is vital. Helpful resources include blogs and books on the topic, she said.

On the other hand, Jeff advises people to just get out and do it. While it's a good bit of work, it's worth every penny, he said.

Three years ago, he said his wife didn't envision making soaps or helping him run a custom knife business, as well as a farm.

“I guarantee she would’ve been like, 'I’m not doing that,'" he said.

The family recently acquired a leather-making kit and plans to add leather accessories for the knives to their line of products. Those interested can find their items on Etsy by searching RusticOaksFarm. They can be found on Facebook. and also frequent a farmers market in Dorchester County.

In the future, they hope their son will want to get involved in the business and contribute his own crafts. They expect to grow their farm by adding more animals and crops.

Jeff said they, ideally, want to be self-sufficient.