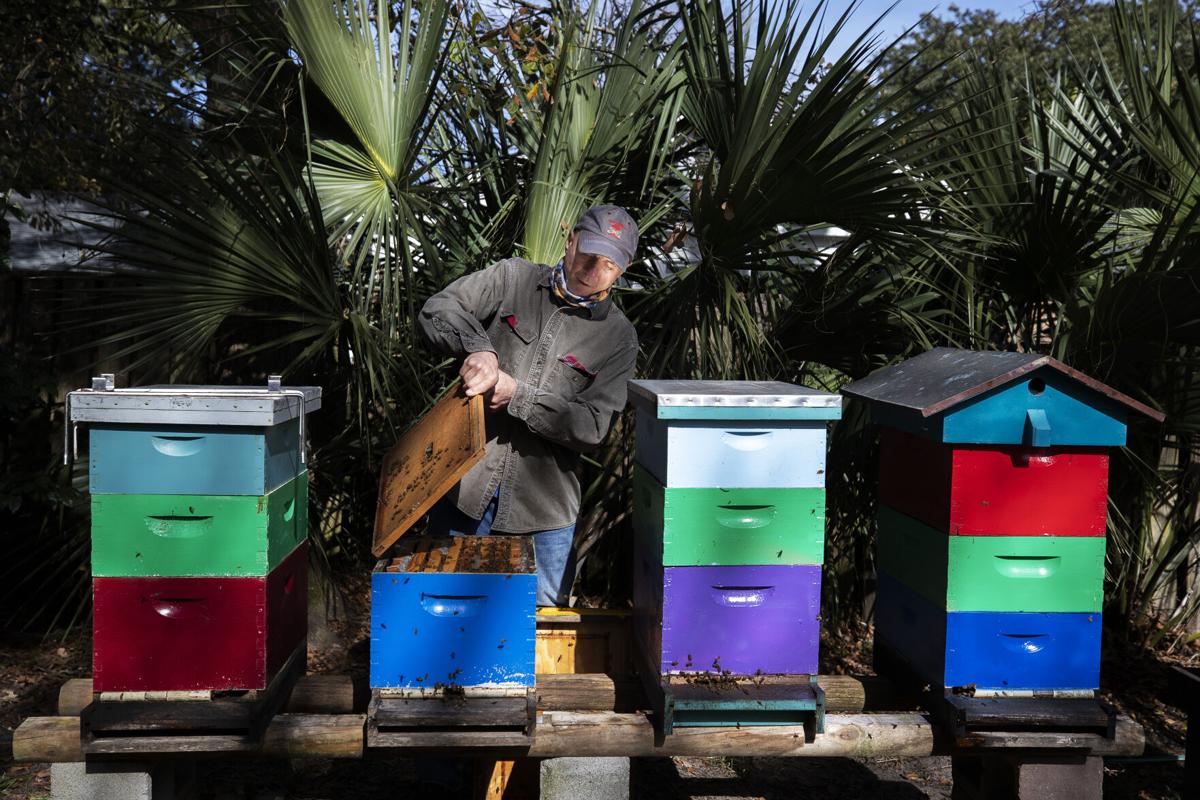 Jim Craig opens up one of his backyard bee hives to check on food levels on Monday, February 8, 2021. Craig started beekeeping eight years ago in Mount Pleasant. Lauren Petracca/Staff 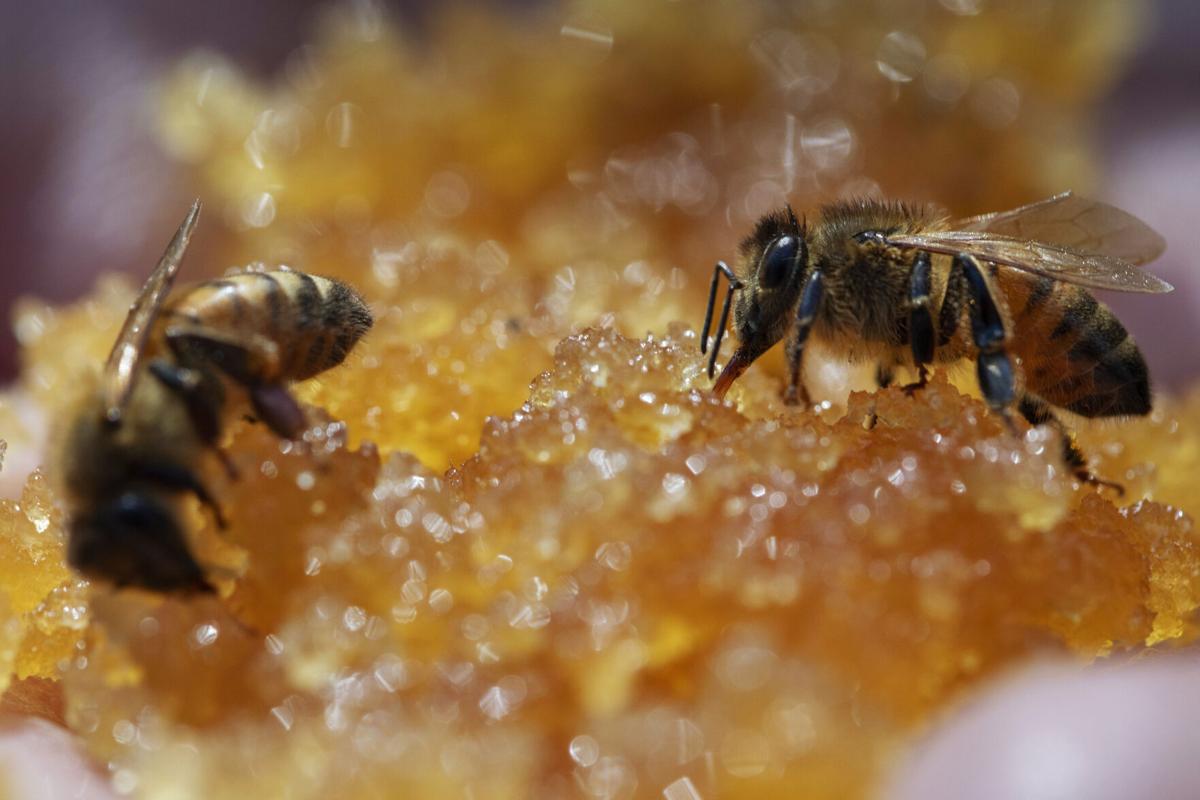 On a chilly day, bees feed on crystalized honey outside of a hive in Jim Craig’s Mount Pleasant backyard Monday, February 8, 2021. Lauren Petracca/Staff 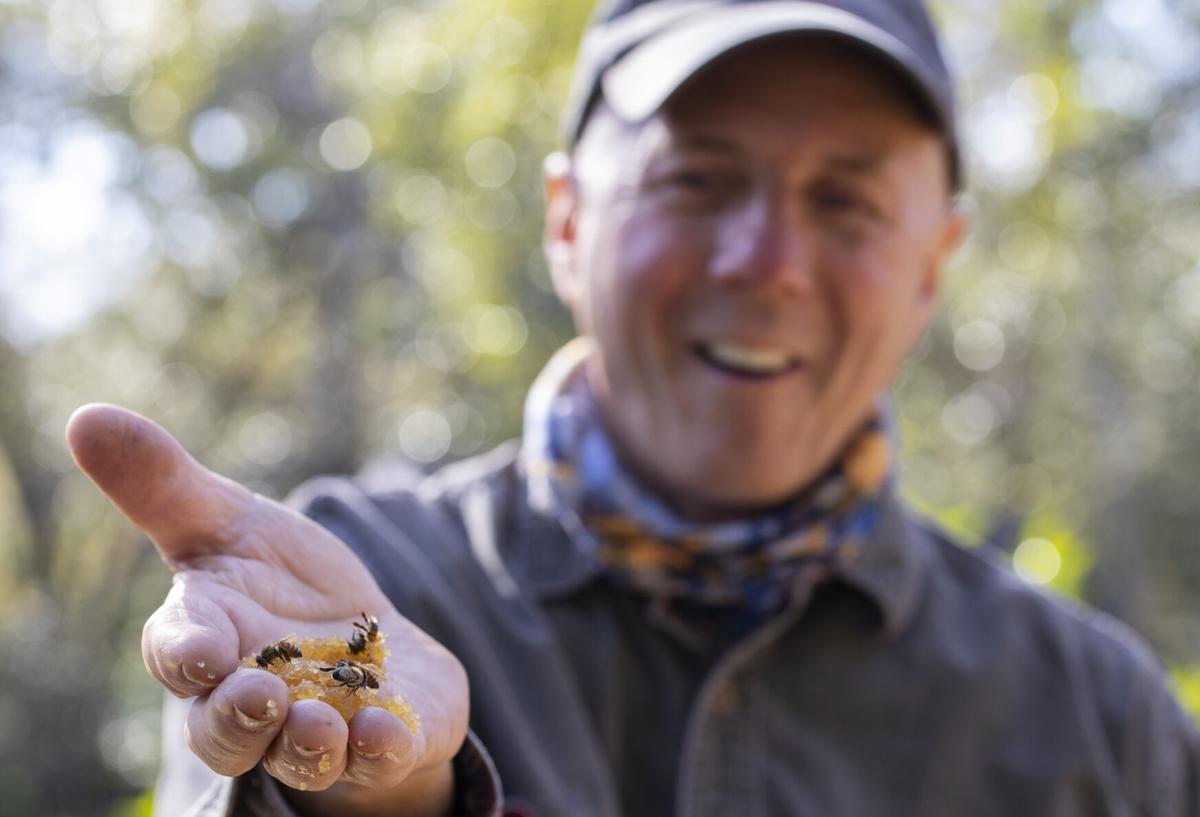 Jim Craig holds bees as they feed on crystalized honey on Monday, February 8, 2021. Craig is an expert bee wrangler. When they swarm, he goes to get them. Lauren Petracca/Staff 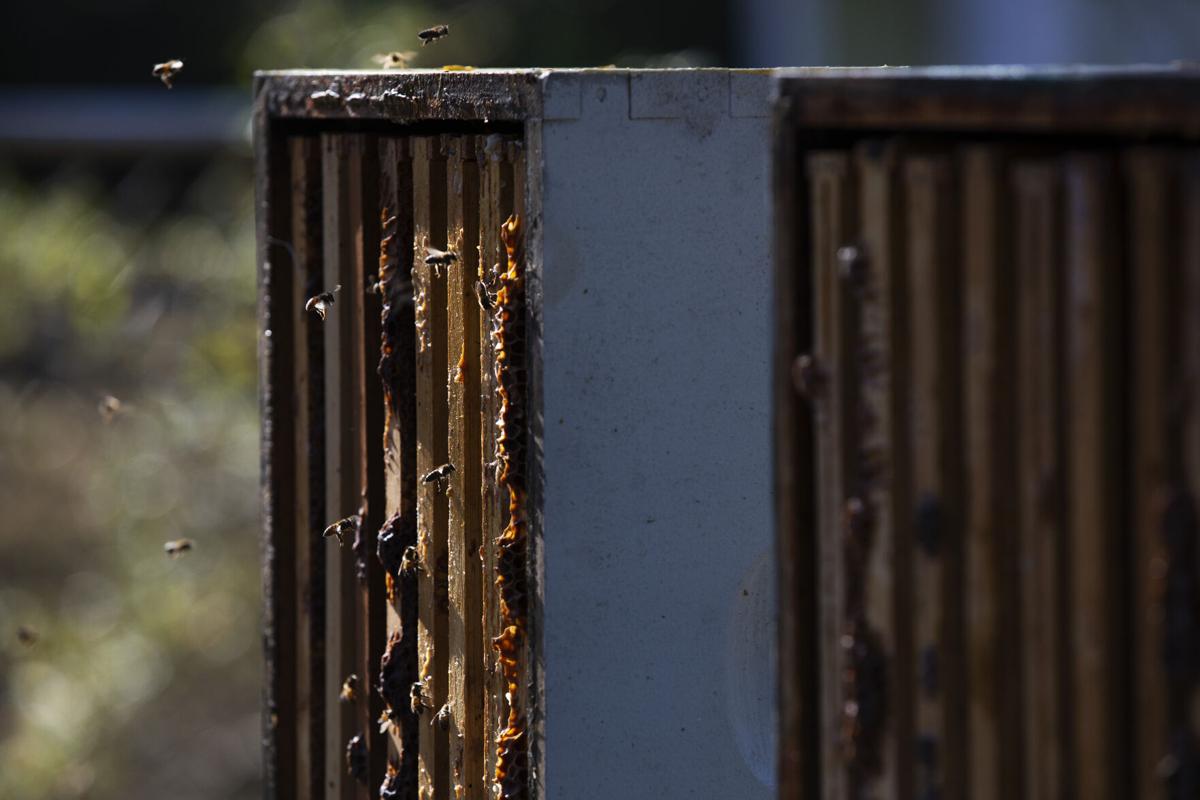 Bees fly in and out of a hive in Jim Craig’s backyard in Mount Pleasant on Monday, February 8, 2021. Lauren Petracca/Staff 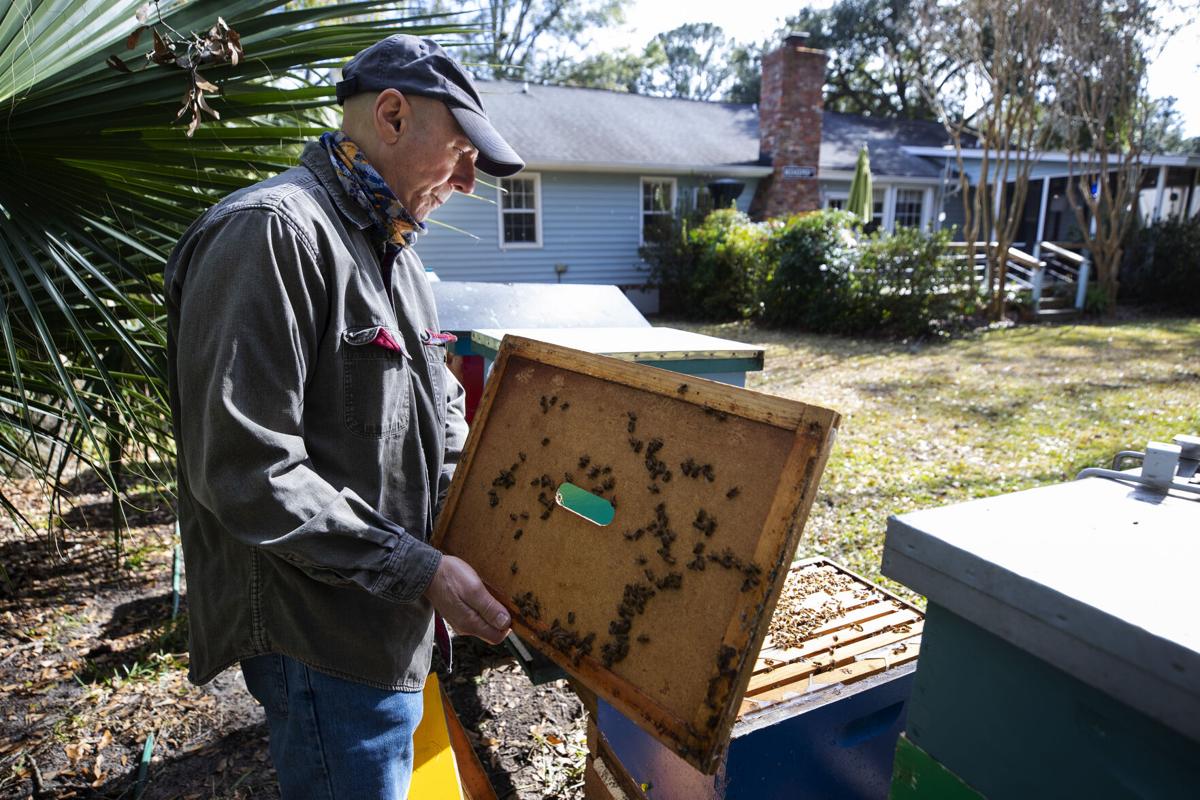 Jim Craig opens one of his bee hives to check on food levels on February 8, 2021. When he's not beekeeping, he's capturing swarms. Lauren Petracca/Staff

The domain of honey bees is pretty simple and, at the same time, fraught with complexity and danger. The bee is so fundamental to the natural world that lots of human folk seem to have an intrinsic fascination with its habits — and sometimes an accompanying urge to get involved.

Enter the beekeepers. First, they must pore over the literature found online, in books and on YouTube. They must acquaint themselves with the potential perils and the methods for deriving that sweet reward.

They must research the merchandise and purchase the right smoker and the best hive containers, in the right quantities, determine the right location in the yard, and ensure that the anti-mosquito mists produced by the neighbors or the municipality won’t drift too near.

They must consult with experts (of which there are many in the Lowcountry) about when to begin, how to find the right colony of bees, how to maximize their productivity, how to give them access to the right nutrients, how to keep them healthy. Then comes the big step forward — purchasing the bees themselves.

Oh, and novice beekeepers also must inform themselves about swarming; what it’s all about, why it occurs and what to do about it. A swarm is good for bees. It means they’re thriving, and multiplying enough to need more space. But it can be bad for beekeepers, who suddenly lose a portion of their bee population.

But no fear, there’s a way to get the little buzzers back. If you know who to call.

In just eight years, Jim Craig has become an expert bee wrangler in the Lowcountry. He will scoop up bees, sometimes with his bare hands, place them into a secure temporary hive, then return them to you. He will ascend to the tops of tall buildings, crawl beneath your floor joists, dig into the walls of your home and climb bee-ridden trees.

The queen is key. Capture her and the hard part is over.

Timing is everything, Craig said.

“We may see our first reproductive swarm being cast about the middle of this month,” he said. “This is the method the bees use to repopulate the world with honeybees. It’s reproductive in nature. Only the strongest of colonies can afford to experience that kind of loss.”

Craig, 68, has removed more than 450 colonies of honeybees from various structures — natural and manmade — and has donated most to beekeeping individuals and organizations.

The organizations in the Charleston metropolitan area are many, and provide bee hobbyists with lots of good information and no small amount of solidarity. They can find others of their kind in Summerville (Flowertown Bee Farm and Supplies), in Cottageville (Lowcountry Beekeepers Association), in Moncks Corner (Berkeley Bees), in Charleston (Charleston Area Beekeepers Association and Charleston Community Bee Gardens), in Jamestown (R&R Acres) and east of the Cooper River (The Bee Cause Project).

More resources are not very far away: the Center for Honeybee Research in Asheville, N.C., and Clemson Cooperative Extension, to name just two.

More and more people are taking up the practice of beekeeping, Craig and other local experts said. They like the interactions, the challenges, the end-product, the mechanics of it all. And they like how beekeeping puts them in touch with one of the main animators of the Earth. The bee is an essential pollinator — which is to say that it plays a fundamental role in creating and sustaining life itself.

It all can get pretty philosophical, Craig noted.

Looking inward during troubled times: How isolation can prompt a spiritual awakening

Thomas Seeley, Cornell University’s biology professor emeritus who wrote the book on the collective intelligence of bees, “Honeybee Democracy,” said swarms might look scary — a mass of 15,000 honeybees undulating through the air or clustering on a branch in the backyard — but it’s only the result of a crowded house. The colony senses it can divide in two.

“So the mother queen leaves with two-thirds of the workers to set up a new colony,” Seeley explained. “Meanwhile, in the old colony, young queens are being reared.”

In fact, the breakaway group is vulnerable out in the open with, at best, a temporary shelter over their heads. They are focused on their search for real estate, and on protecting themselves in the meantime.

Scouts buzz off in search of a suitable permanent space where the bees, secure once more, can apply their wax, build their combs, raise their brood and deposit their honey.

If a swarm is not recovered, a beekeeper suddenly sees his honey productivity cut in half or more. But if it is recovered and rehoused, then the honey starts flowing.

Some swarms consist of wild bees and come from who knows where, Seeley said. To capture a swarm of feral bees and add them to a backyard hive complex likely would give an evolutionary boost to someone’s domestic bees. The feral ones have developed a stronger resistance to a particularly dangerous parasitic mite that attaches to honeybees and feasts on the juicy insides.

The threats, though, are real and acute, Seeley said. The first is pesticides. Mosquito spraying is bad. So is the industrial stuff used in almond orchards and other commercial fields whose operators rely on bees for pollination. Those bee populations work hard, only to get poisoned by chemicals, which weaken them or worse.

Another threat is habitat loss. For instance, the upper Midwest used to be dairyland, full of alfalfa and clover fields — perfect for honeybees. But in recent decades, soy and corn have replaced a lot of the dairy pastures, and non-flowering monocrops are definitely not appealing to the bees, Seeley said.

A third big problem is that ectoparasitic mite, introduced to North America from Asia. Back home, it attacked indigenous bees which, over time, developed a certain familiarity with the suckers of bug fats.

“But we have European honey bees and they don’t know about this mite yet,” Seeley said.

A related issue is that the mites carry viruses, which can spread across bee colonies.

“The viruses do all sorts of bad things,” he said.

So domesticated colonies require a lot of care.

The Charleston Community Bee Gardens is replete with domesticated colonies. It’s just like a community garden except instead of vegetables, you grow bees, said President Jim Strohm. It’s the perfect solution for yardless, apartment-dwelling beekeepers, or for those whose timorous homeowners association forbids natural honey production.

It got started in 2012 by four enthusiasts and quickly became a nonprofit. Today, the community group has more than 100 members, eager to promote beekeeping as a positive good, who spend hours in the apiary located along Savannah Highway, across from the Clemson Coastal Research and Education Center.

In normal times, when a novel coronavirus isn’t adrift like pollen in the breeze, the group meets regularly to discuss best practices, disaster stories, bumper crops and all kinds of bee-related topics, Strohm said. Now they rely on Zoom meetings.

“A lot of people get into it, don’t totally understand it, then they quit,” he said with a note of regret. “Part of the reason they’re quitting is that nobody is following up with them, helping them when they have a problem. So we make an effort to be available.”

Jim Craig isn’t only a professional swarm catcher. He keeps around 15 hives in his suburban backyard. In the cooler weather, whenever it’s below 57 degrees Fahrenheit, the bees cluster to keep warm. In the center of the cluster, where the queen is protected, it can reach 70 degrees.

The intrepid among them might still venture into the cold for something sweet. When that happens, they become what Craig calls “slow bees.” They might sink into a torpor and require a gentle caress and puff of warm breath to reanimate them.

When bees swarm, they end up either in a tree or in a building. If the former, Craig will scoop them into a trap hive, baited to lure the queen, or use a special vacuum. Sometimes he has to coordinate his efforts with professional tree trimmers. Sometimes the hive needs to be removed with a chainsaw.

If the latter, well, it can get complicated. The bees find a crack or crevice, sneak in and set up residence. The longer they’re there, the bigger their house gets. Craig has found himself pulling out honeycomb.

And it can be tricky to find and trap the queen. She might move over to the next set of wall studs or floor joists, protracting the search.

The past eight years have been fun for Craig. The bees are good teachers, he said.

“There is so much out there to learn about them,” he said. “It’s such a contemplative hobby. The main part of that is not just the education you get, but to help bees get through the many struggles they have to remain viable in this world.”