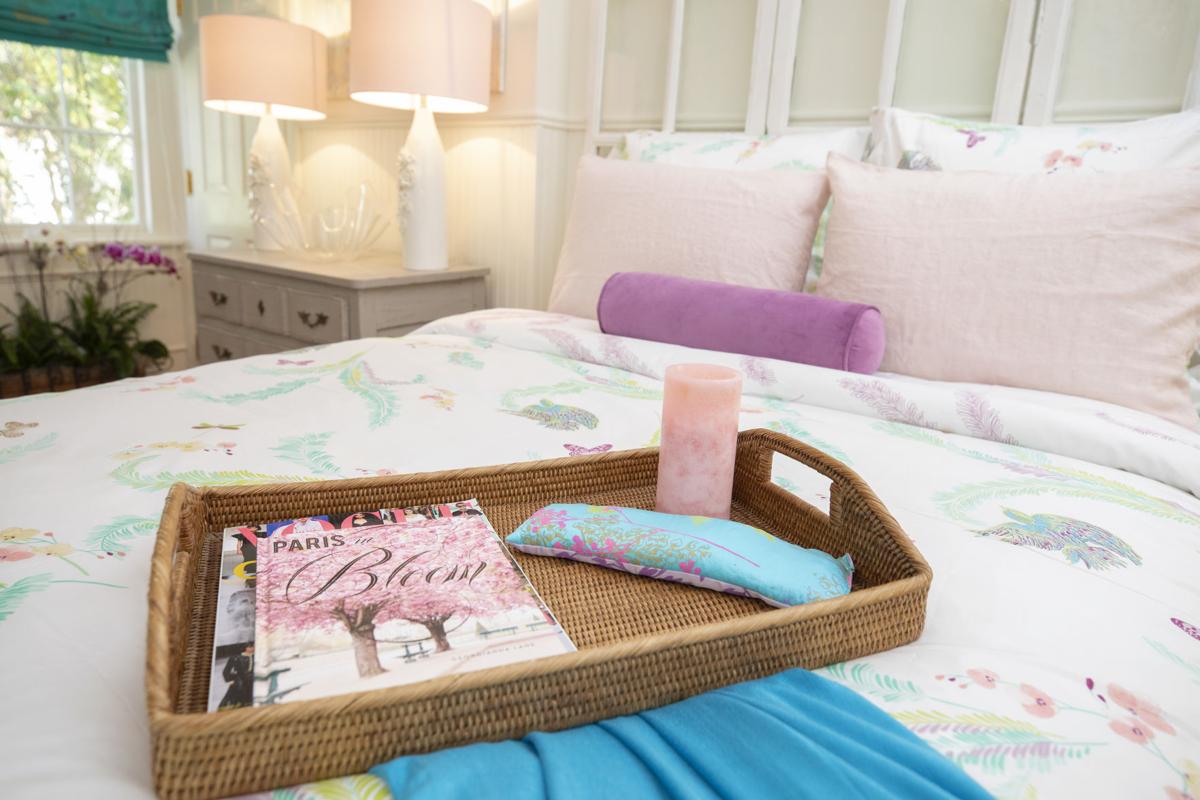 A detail inside of the garden bedroom, designed by Terry Stephenson, inside this year's Charleston Symphony Orchestra League's Designer Showhouse, located at 184 Ashley Ave., on Wednesday, March 11, 2020. Lauren Petracca/Staff 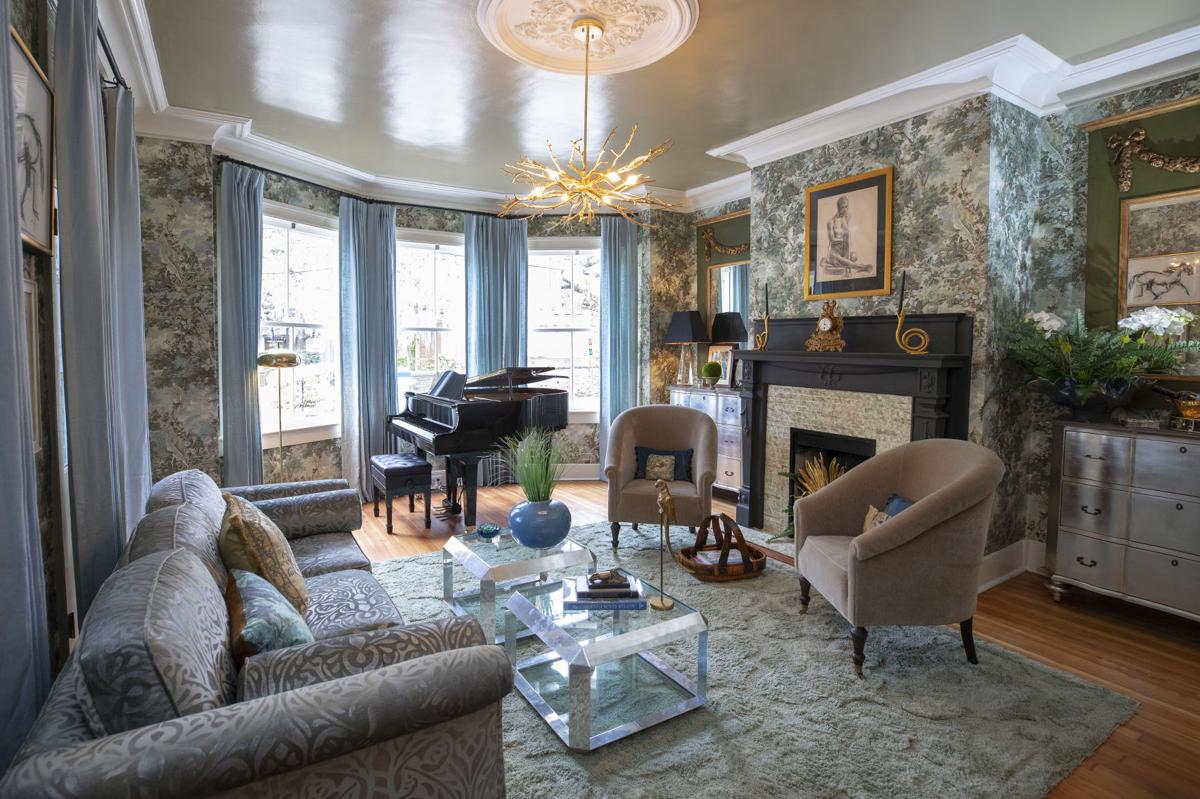 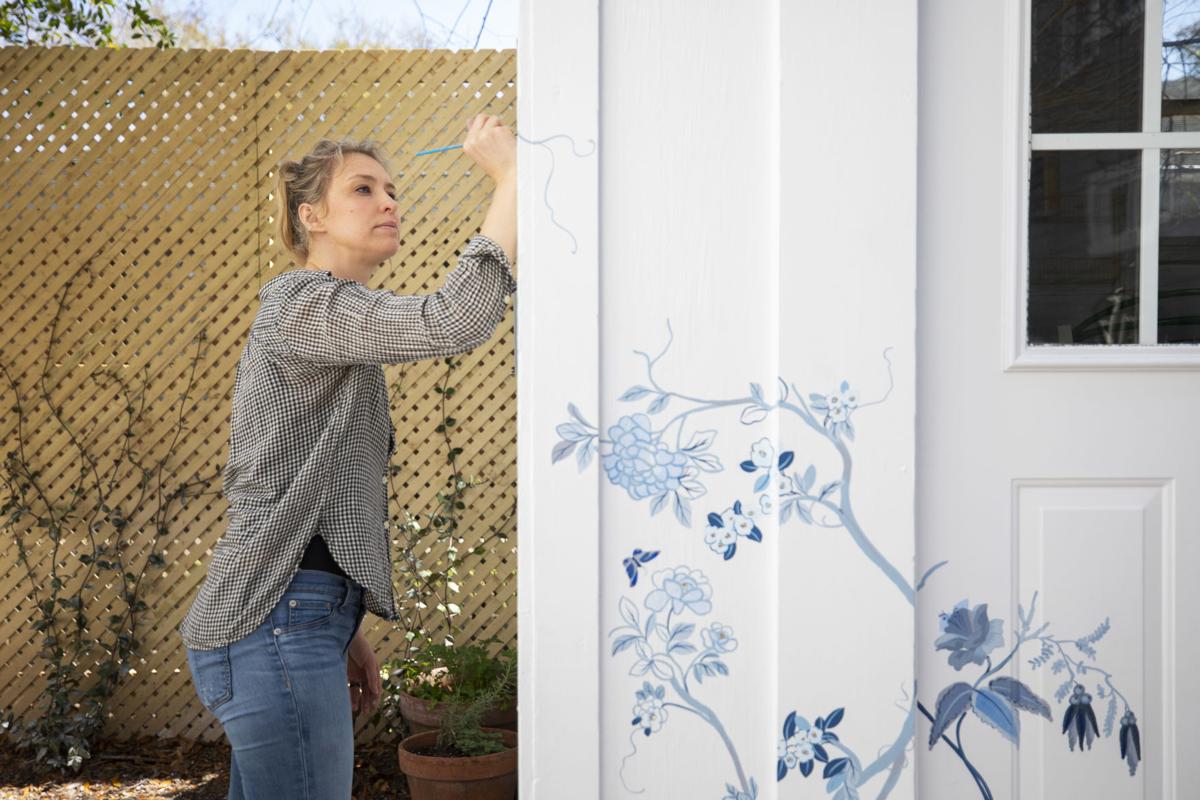 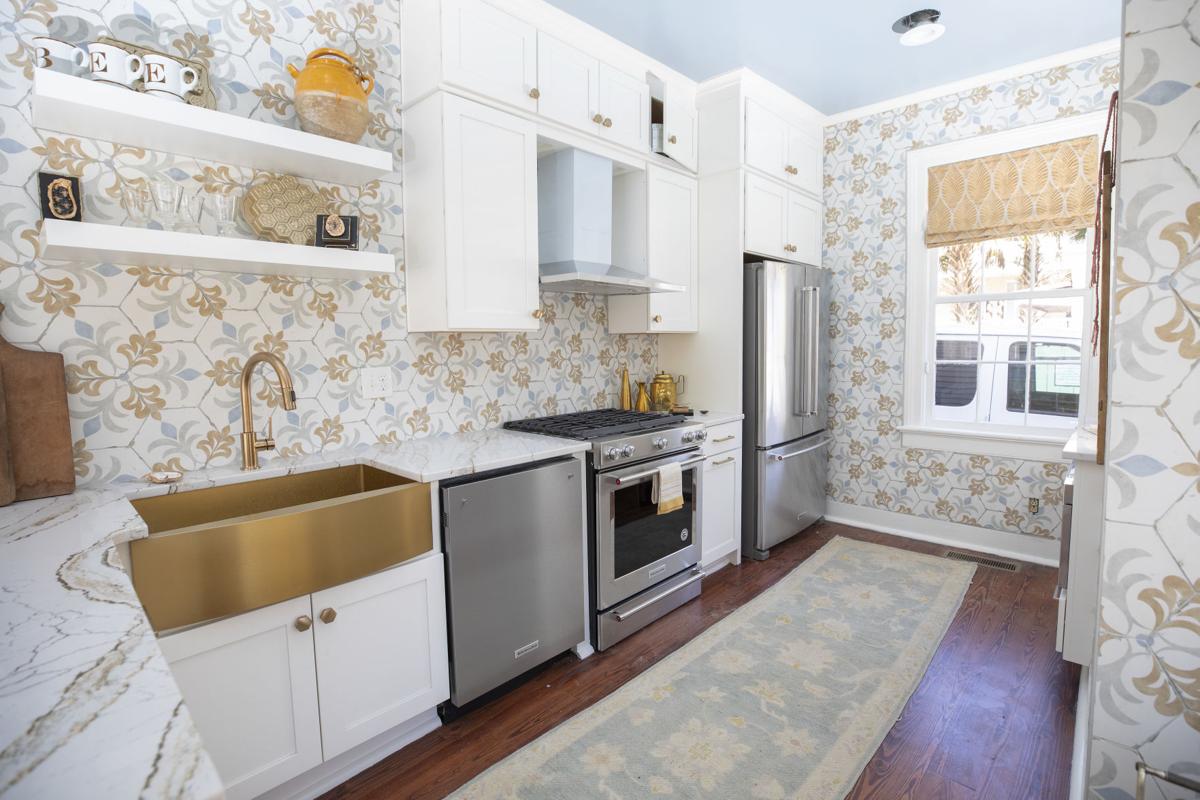 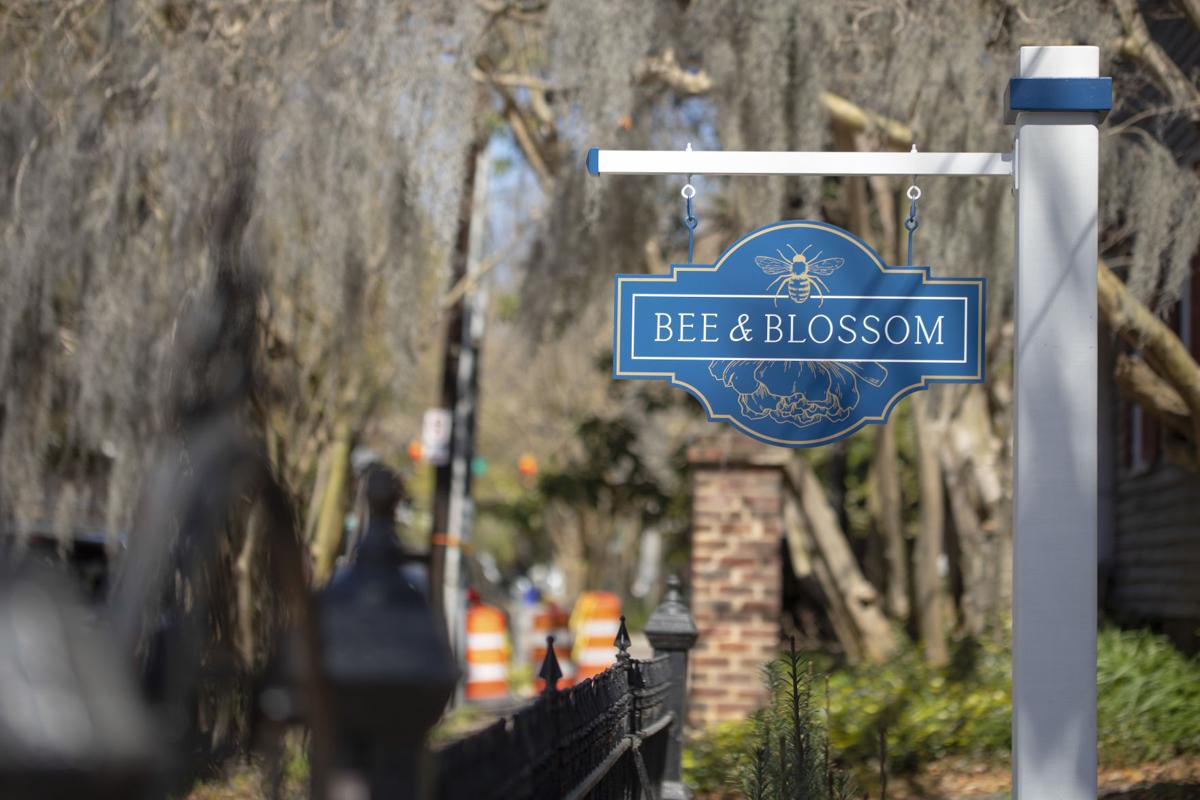 A sign for Bee and Blossom Bed and Breakfast hangs outside of this year's Charleston Symphony Orchestra League's Designer Showhouse, located at 184 Ashley Ave., on Wednesday, March 11, 2020. Lauren Petracca/Staff 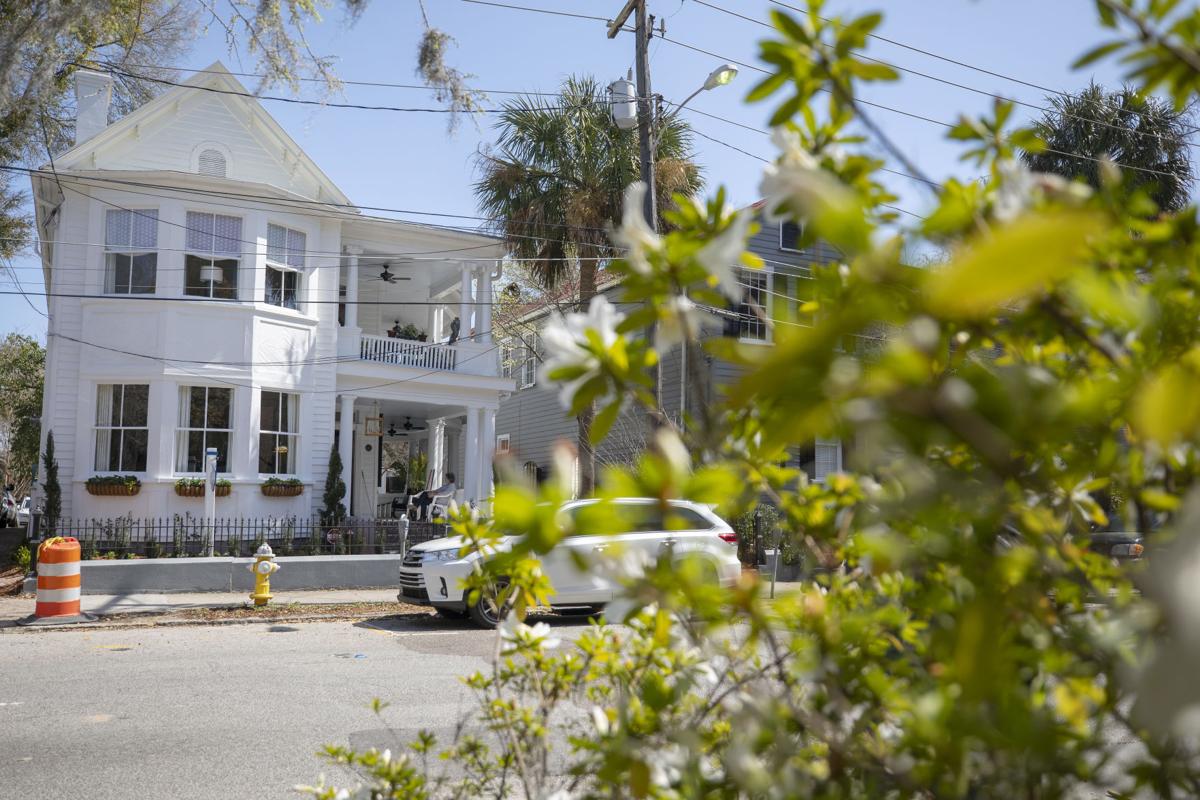 Note: The Charleston Symphony Orchestra League's Designer Showhouse has been suspended because of the pandemic, but the league is asked for ticket purchases to be considered a donation since it's the group's largest fundraiser of the year. The pre-pandemic story is below.

The Symphony Designer Showhouse usually takes place in the peninsula's pricey South of Broad area, where some luxury residences are known for their elegance.

However, this year's event is just north of Broad Street at 184 Ashley Ave., a home known as the historic Fitch-Rivers House.

The structure rests on the edge of Charleston's hospital district, and is surrounded by both homes and businesses.

But while the home isn't within a mile of The Battery, designers don't feel any grandeur will be compromised at this year's showhouse.

Designer Allyson Kirkpatrick, who will work to transform one of the rooms into a music salon, pointed out features, such as the  home's curved staircase, moldings and hardwood floors.

"The house is beautiful," she said. “The bones of this house are better than the last two houses, I think. The house is more intact.”

Tickets to the event are available through March 18 at a discounted rate of $25. Tickets are available at the door beginning March 19 for $30. You do not need a ticket to visit SCORE, the event's pop-up shop, or the cafe.

Cafe Musique, the Symphony Designer Showhouse Garden Cafe, will be open for its 37th year with expanded hours and flavor-inspired surprises. This year's event will include new features, such as a food truck and brunch for guests.

Cafe, wine bar and brunch hours are available at www.csolinc.org.

The building merges the classic Charleston single structure with a Queen Anne Victorian style. Queen Anne design elements of the Ashley Avenue house include the two-story bay window on the Ashley Avenue facade, with three wood sash windows in a two-over-two grille pattern on each story.

The structure's first owner, Augustus Fitch, was a clerk and later bookkeeper for WP Holmes and Company. He sold the house to John Rivers, a prominent cotton merchant and president of the Charleston Cotton Exchange.

During the late 20th century, the house was frequently used as a bed and breakfast, known at various times as the Old Towne Inn and Cannonboro Inn.

When the 2020 Symphony Designer Showhouse closes, the house will be reopened as the Bee and Blossom Bed and Breakfast.

Patti Tully, designer liaison and co-chair of the event, said the business' owner was very interested in hosting the event, adding that the symphony is hoping for increased attendance in its new location.

"It's unique because we’ve never been in this area before," she said. "We might have a totally different group of guests that come in."

Heidi Huddleston, CKD, will transform the kitchen to offer a nod to the business' theme.

She said she wanted to infuse personality and color into the home's small kitchen, which maintains a view of the garden. Countertops will have honey-colored ribbons, and wall tiles possess a geometrical pattern with honeycomb shapes.

The window treatments also have a golden touch.

Huddleston, who's participated in five showhouses, said the building has been refurbished into a "jewel box," where designers have used their distinct styles and personalities to reshape individual rooms.

"It's always refreshing to see the different designers with their own business and perspectives to come together and transform spaces in a short timeline," she said.

Kirkpatrick will revamp one of the rooms into a music salon, featuring a baby grand piano.

She's working to blend green, scenic wallpaper that displays branches and flowers with other features of the room, such as a fireplace containing green tile and a golden chandelier.

“It just the perfect foil for the room," she said.

The 2020 Charleston Symphony Orchestra League's Designer Showhouse, located at 184 Ashley Avenue, will later be reopened as a bed and breakfast.