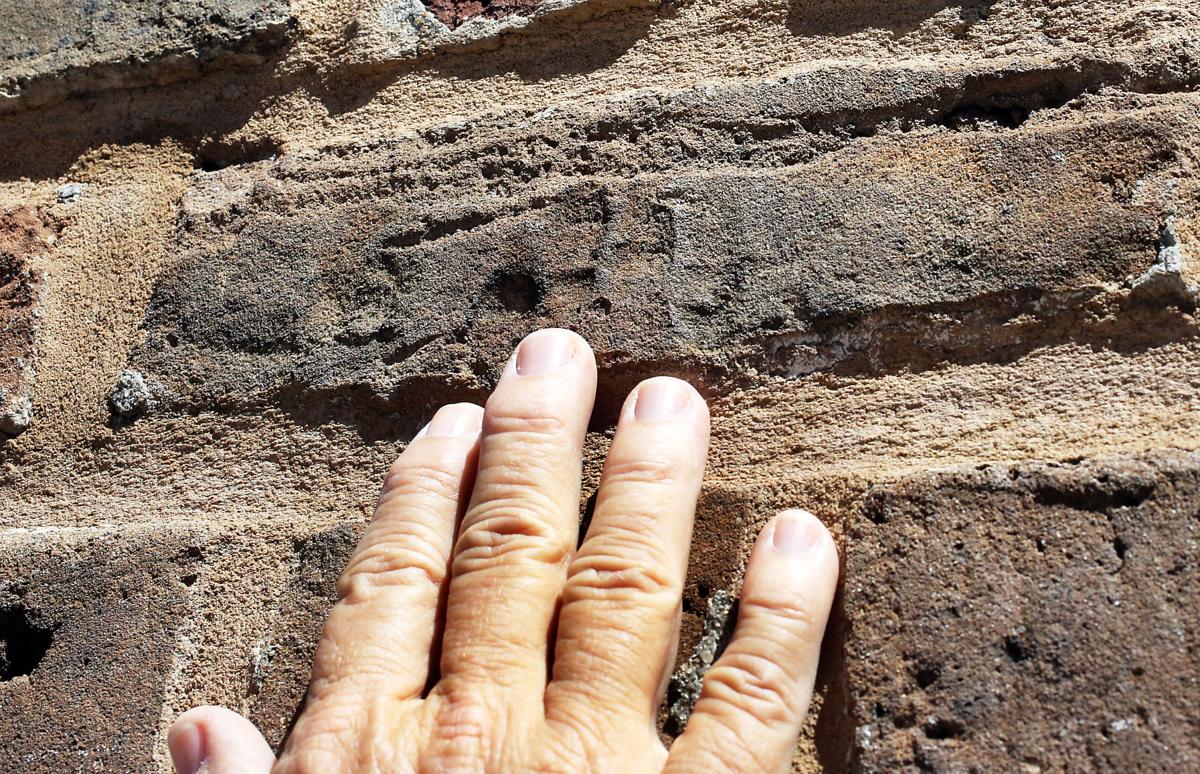 Paul Garbarini, president of Uniquely Charleston Tours, shows where finger indentations can be seen on a brick at the historic Charleston City Market. Brad Nettles/Staff 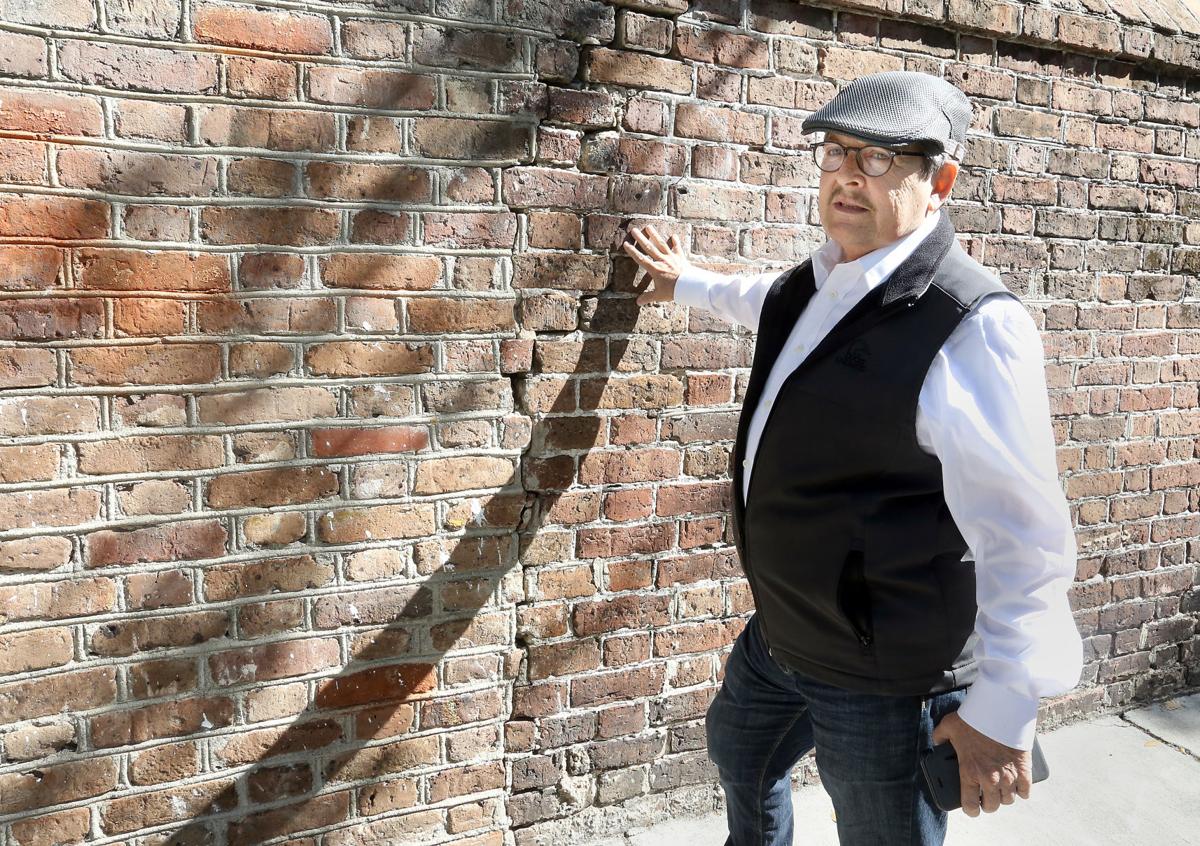 Paul Garbarini, of Uniquely Charleston Tours, talks about fingerprints left during production of bricks for a wall on  Magazine Street in Charleston. Brad Nettles/Staff 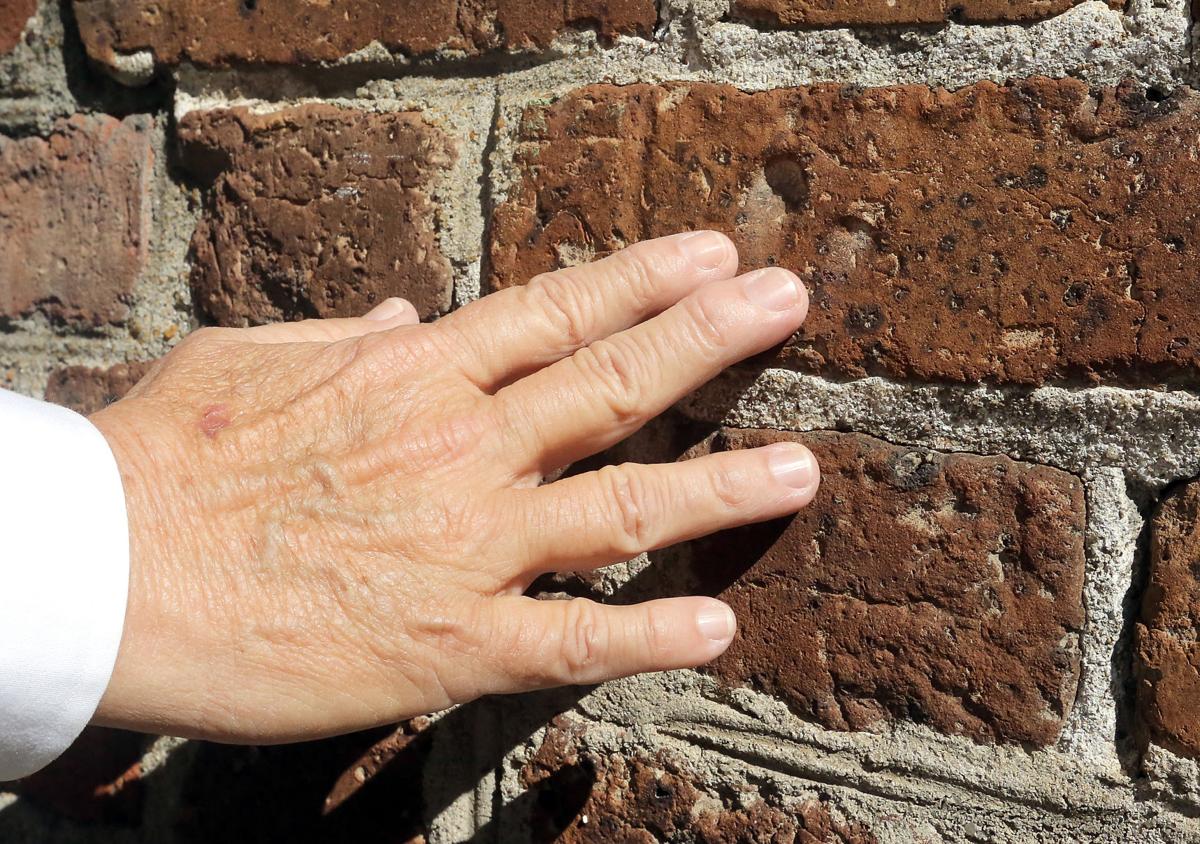 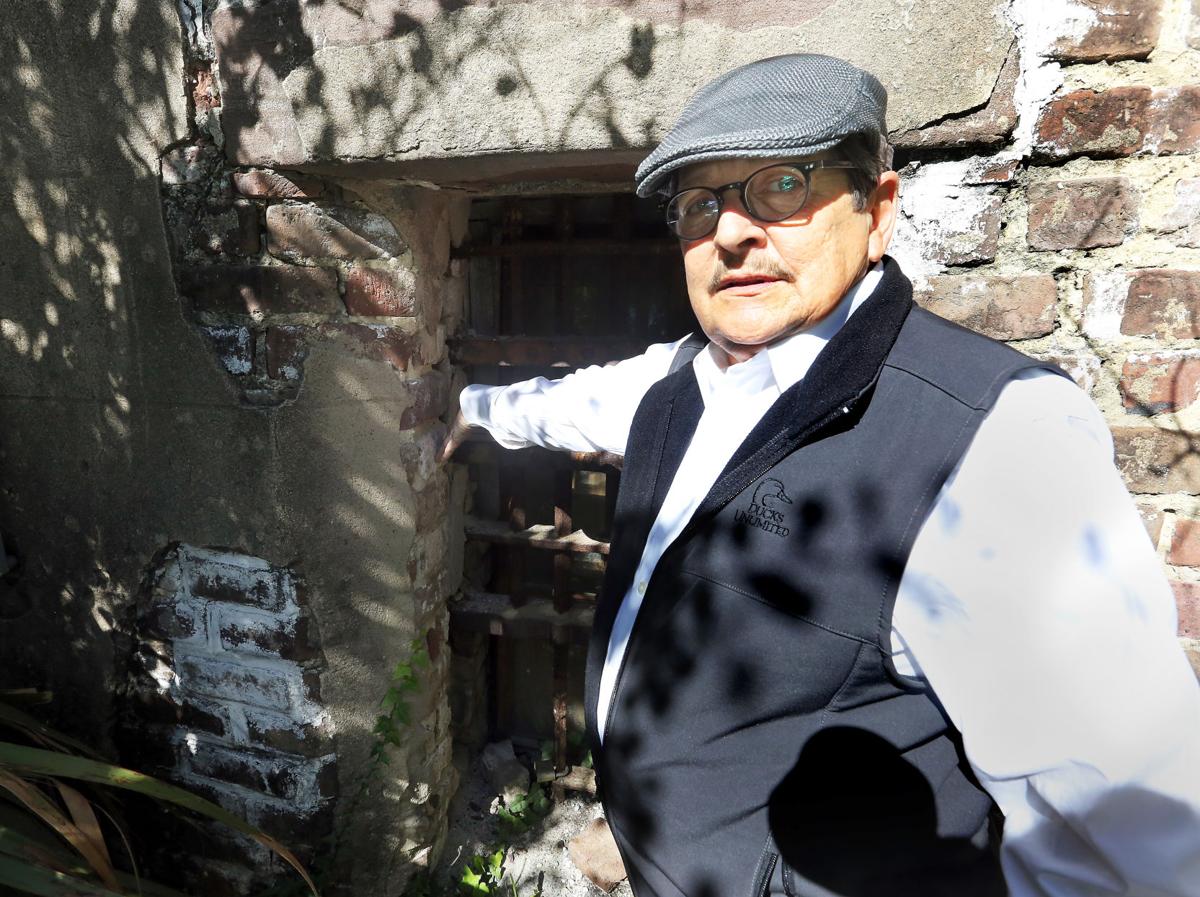 Paul Garbarini, of Uniquely Charleston Tours, shows where finger indentations were left during production of the bricks for the old city jail. Brad Nettles/Staff

A finger indentation remains from the man-made production of a brick on a wall on Magazine Street in downtown Charleston. The bricks are believed to have been made by slaves. Brad Nettles/Staff 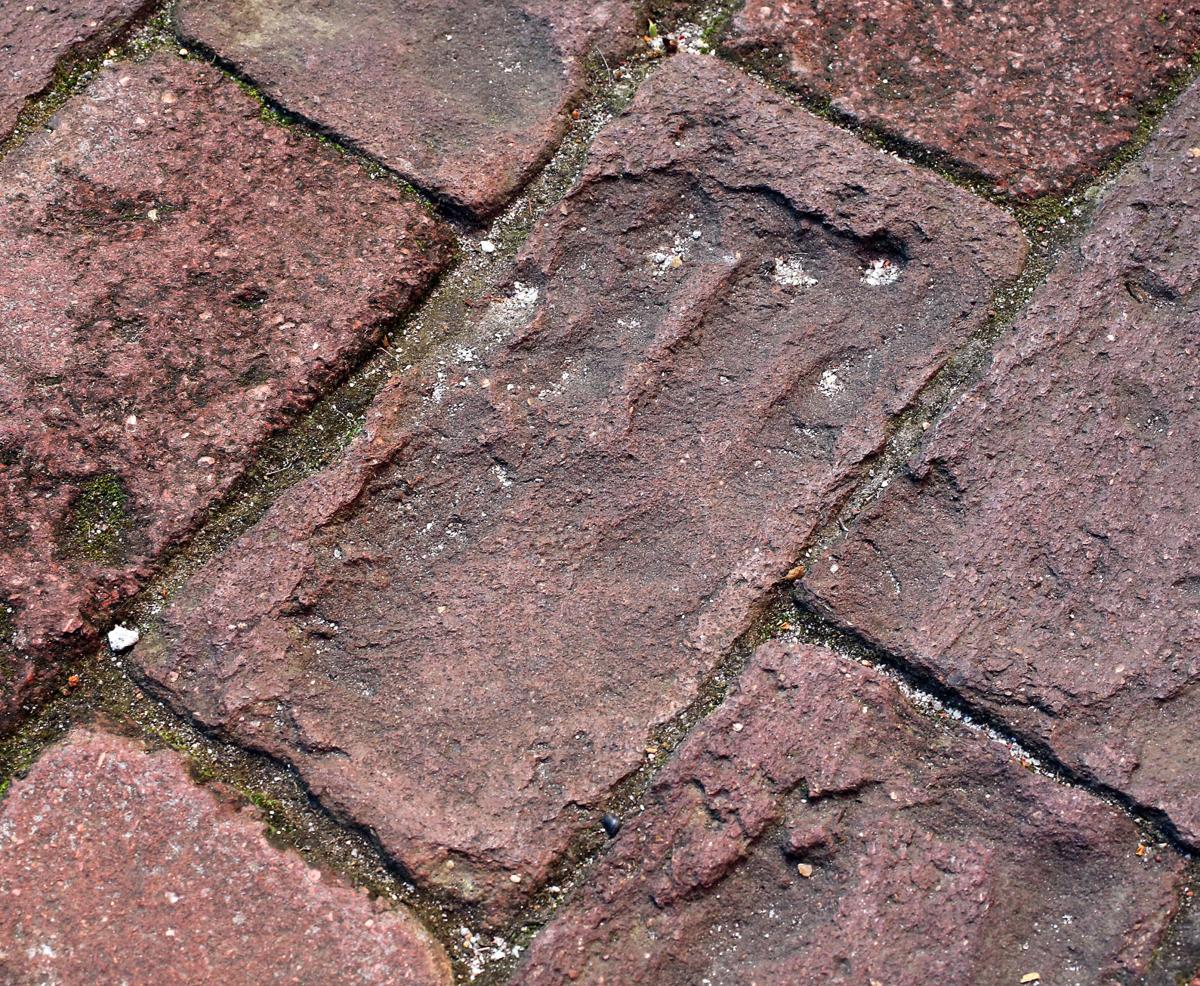 A complete hand print can be seen in this brick on Philadelphia Alley, near Queen Street. The alley is named after the Pennsylvania city because it provided aid to Charleston after a disastrous fire in 1810. Brad Nettles/Staff

Paul Garbarini, president of Uniquely Charleston Tours, shows where finger indentations can be seen on a brick at the historic Charleston City Market. Brad Nettles/Staff

A finger indentation remains from the man-made production of a brick on a wall on Magazine Street in downtown Charleston. The bricks are believed to have been made by slaves. Brad Nettles/Staff

Part of Charleston's dark past is in plain sight throughout the downtown area, but few people recognize it.

Forever captured in brickwork are the fingerprints of former enslaved children. There aren't many of them, but they are evident.

Paul Garbarini, who heads Uniquely Charleston Tours, points out the imprints on several structures as he walks across the city's southern end.

They can be found at the Old City Jail, the City Market, a brick fence and even on the walls of some pre-Civil War buildings.

"They were always made by enslaved people," Garbarini said. "There were no white people making bricks back then."

Christina Butler, a professor at the American College of the Building Arts in Charleston, said she couldn't make a blanket statement about who made the bricks, but she said bricks were made on plantations and slave labor was used to make the bricks, though there could have been a white overseer involved.

"We didn't have much by way of indentured servants because African slavery was so prevalent at the time," she said. "The majority of bricks were made on plantations where clay was available. Virtually all bricks made at a plantation were done predominantly with African labor."

In Virginia, for instance, others in addition to slave laborers could have been involved in making bricks, including poor unskilled free laborers, convicts or indentured servants, according to a history of Colonial Williamsburg.

Each year in the fall, Garbarini said, workers would go to nearby rivers, harvest clay and spread it out over fields to season over the winter. Alternating cycles of cold and warm weather would help set the clay. During this time, he said an enslaved child and maybe an ox would walk across the clay to crumble it.

"I don't know if they were bare-footed or not," Garbarini said.

In the spring, sand and water were added to the clay to make a putty-like mixture, and an adult enslaved man would take a heaping handful from the clay pit and toss it into a mold.

"They only got one take," Garbarini said.

Each mold could make one to six bricks, and there were several adults slapping the clay mixture into the molds.

The wooden mold itself could be coated with water or sand, depending on if they wanted bricks to look smooth or rough, Garbarini said.

If there wasn't enough in the mold after it was set, it would have to be discarded and the process would have to start over because a partial brick could break during the cooking process.

The adult then scraped the top of the mold to remove any excess clay so the bricks would be uniformly rectangular. They were then allowed to sit and dry for a while so the bricks could shrink.

The mold was then lifted off the bricks, and they were allowed to set on a drying floor.

To help bricks dry evenly, they had to be turned — by hand.

"The fingerprints come from turning the bricks while they are still damp," Garbarini said. "In addition to children lifting and turning them, they also had to push them over sometimes."

Butler said she has always heard that enslaved children helped to turn the bricks, but she has not found documentation to prove it.

"Children absolutely would have worked simple jobs on plantations and helping with the brick-making process seems a very likely job for them," Butler said. "That's as low-skilled as you get. You just stand there and turn the bricks ... and there's the evidence of the small fingerprints to verify that."

After several days or weeks of drying, the bricks were placed in a wood-fired kiln for two weeks with constant temperatures from 1,800 to 2,000 degrees, Garbarini said.

That means someone had to constantly feed the fire, and trees from nearby forests had to be chopped down for fuel.

After the bricks cooled, they were placed on barges from upriver plantations and sent to Charleston to build many of the structures that millions of tourists come to see every year, though the majority of them probably don't realize the imprints of former enslaved people are right in front of them.

At one downtown site, people walk over a brick with a full handprint on it all the time, but they most likely don't see it.

Though the age of the brick is not known, it can be found in the brick path along Philadelphia Alley near Queen Street. The alley is named after the city in Pennsylvania, which sent aid to Charleston after a fire ravaged a swath of the city in 1810.

At the City Market, evidence of fingerprints in the bricks can be seen as well and the placement of the bricks themselves is a story, too.

In 1938, a tornado destroyed many of the buildings in the long stretch between Meeting and East Bay streets. On the east end, one structure was not rebuilt and is now a parking lot near the U.S. Customhouse.

After the natural disaster, many of the bricks were reused and placed in an inexact style. Bricks with paint on them or red bricks came from an interior wall or somewhere else, Garbarini said.

When the City Market was renovated a few years ago, the white mortar was tinted to make it look older.

"The bricks will talk to you if you let them," Garbarini said as he placed his fingers in the fingerprints on a wall near State and South Market streets.