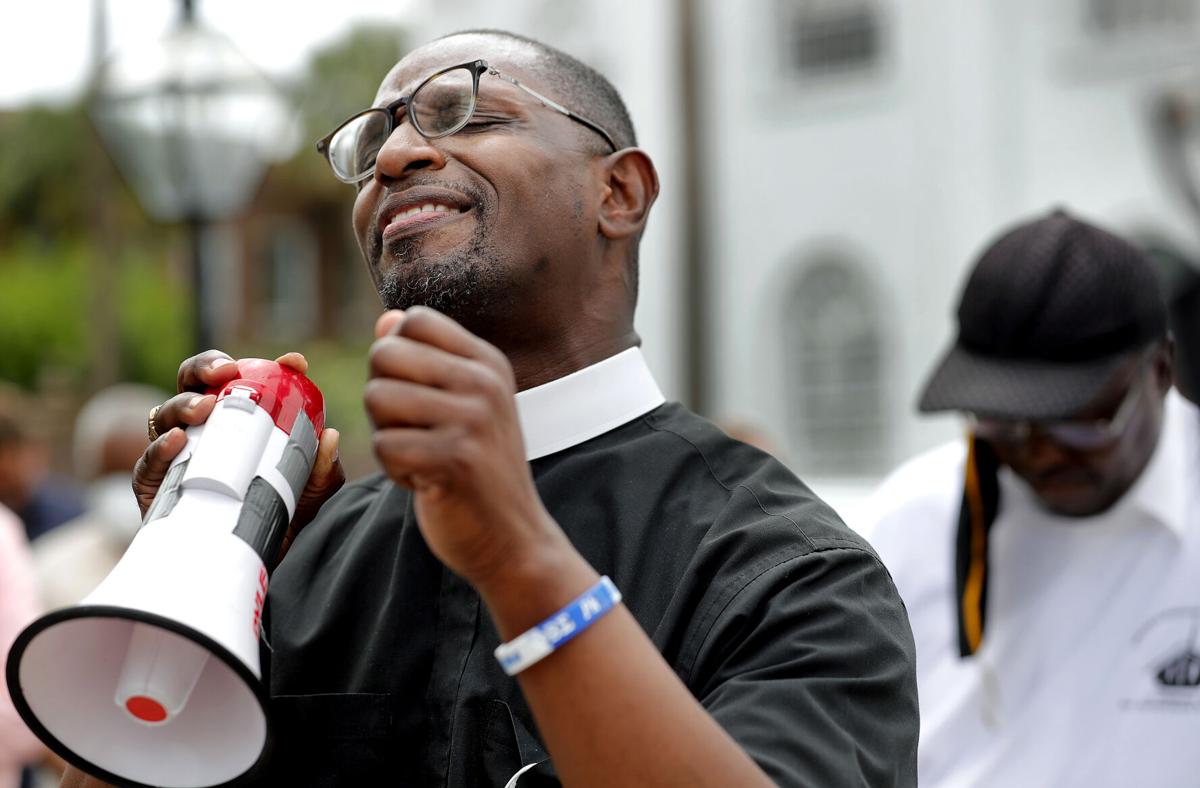 The Rev. Kylon Middleton, of Mount Zion AME Church, prays at Charleston’s Four Corners of Law as clergy from various denominations participate in a prayer walk Thursday, June 4, 2020, in Charleston. Ministers and activists note the faith community has been largely absent in today's social activism when compared with their involvement in the struggles of the mid-1900s. File/Grace Beahm Alford/Staff 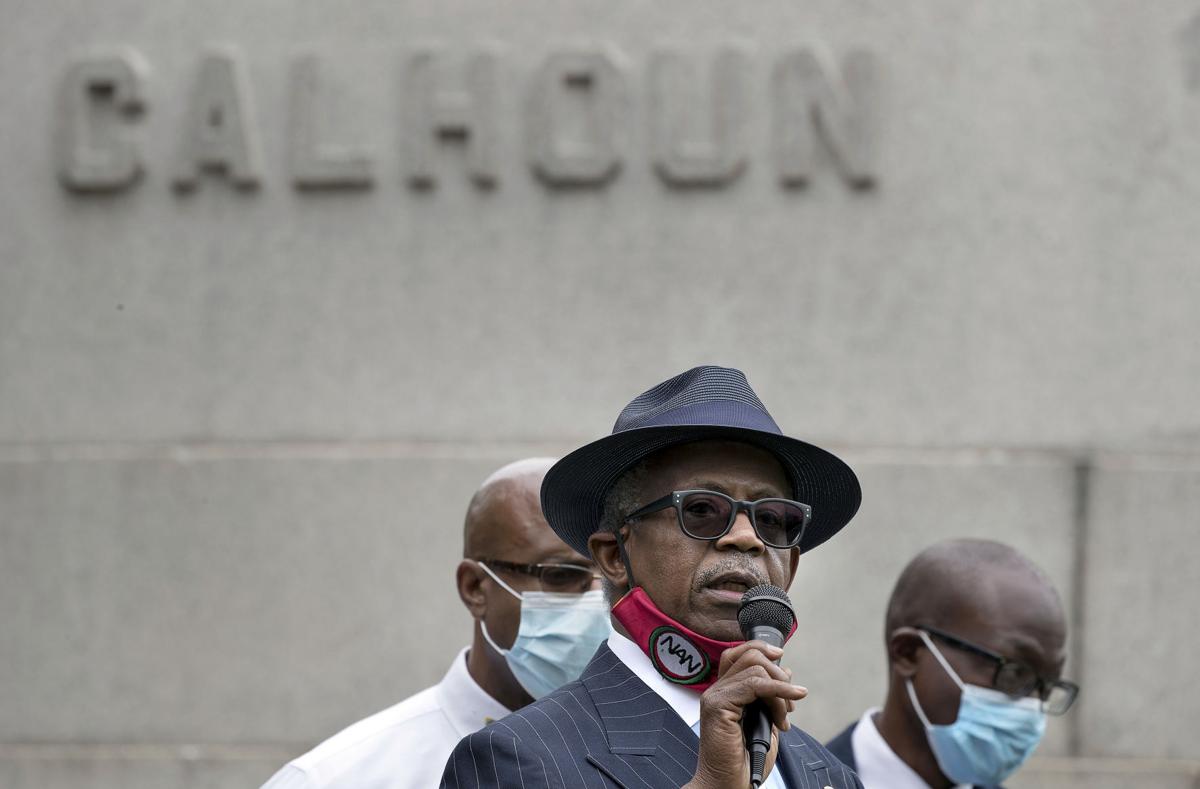 The Rev. Nelson Rivers III, with the National Action Network, gathered with members of the NAACP and several lawmakers in Marion Square to call for the immediate removal of the John C. Calhoun Monument on Tuesday, June 16, 2020, in Charleston. Grace Beahm Alford/Staff 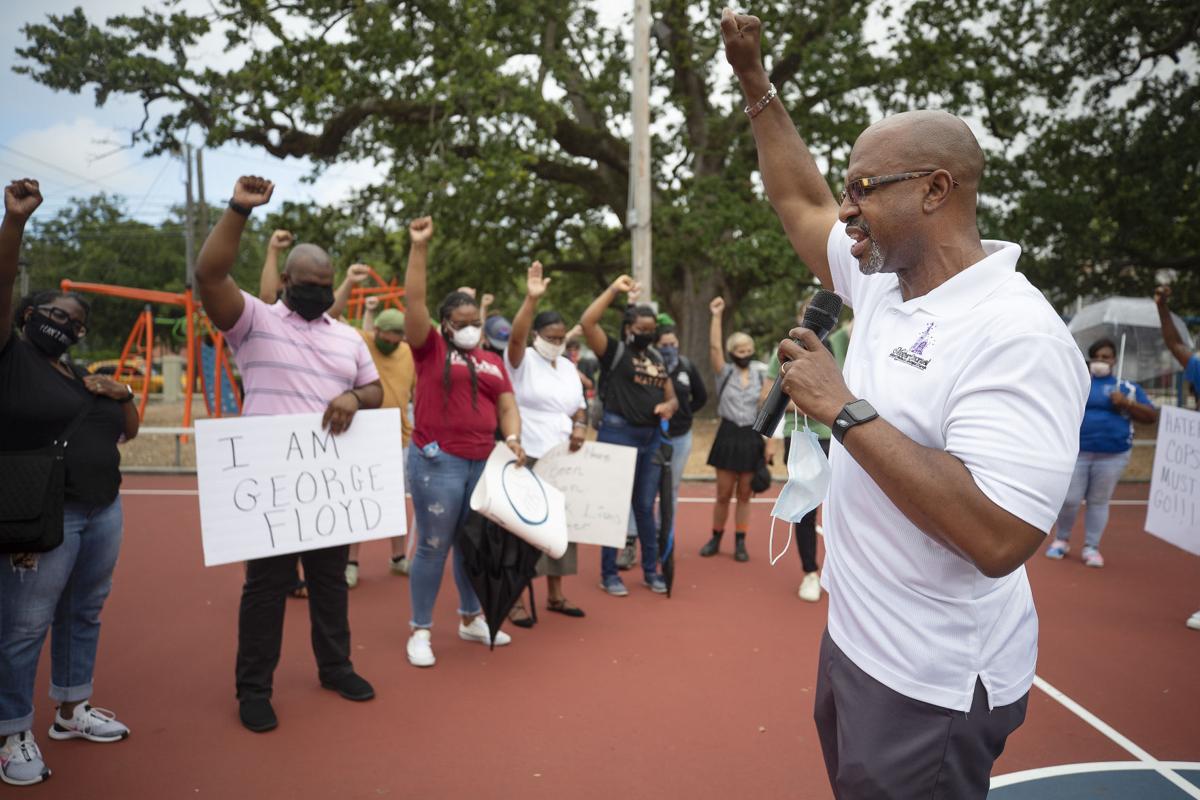 When Blacks were freed from slavery, a signature move in embracing emancipation was establishing their own houses of worship.

Churches became sacred spaces where African Americans celebrated their liberation and, even if just for a few hours, could escape persecution and oppression.

Many of these churches would serve as focal points for the activism that would dismantle segregation during the civil rights movement of the 1950s and 1960s.

Clergy members led peaceful marches. Churches hosted activist meetings. Ministers preached a social gospel that focused not only on mansions in the sky, but poverty on the ground.

The death of George Floyd at the hands of Minneapolis police in late May sparked a similar wave of social unrest, but ministers and activists note the faith community has been largely absent when compared with their involvement in the struggles of the mid-1900s. The efforts are led largely by grassroots organizations and activists who are not waiting for cues from clergy.

It raises discussion about what role the faith community should play in the modern movement, and whether strategies grounded in theological beliefs, such as nonviolence and peaceful protesting, are viewed as effective in a society still grappling with racism.

There have been exceptions. The AME Church hosted a march earlier this year in Columbia that drew more than 1,000 participants, pastors in the Lowcountry have hosted at least two prayer walks downtown and in North Charleston’s Park Circle, and clergy have been present at Black Lives Matter and other protests throughout the summer.

But the presence of clergy at rallies and protests has often been scarce.

To put things into context, socially active congregations have often been in the minority as churches have long been divided on whether they should speak out on social issues.

But in recent years, ministers have increasingly felt isolated in their efforts to speak to community issues.

The Rev. Kylon Middleton pastors Mt. Zion AME, a church that's part of a denomination founded upon liberation. Middleton once led the Illumination Project, an effort by the city of Charleston to strengthen ties between law enforcement and the community.

Middleton is vocal on community issues, but it often feels like he’s in the fight alone.

He recalled a point in 2016 when he contacted several clergy to help speak out against a city ordinance that Middleton said would have an impact on how long cars could park on city streets.

Middleton, who noted several churches would have been impacted by the decision, said he was the only member of the clergy to attend the City Council meeting.

“It is a faith community vacuum," he said. "We’re absent."

Several years later, not much has changed. Some clergy are hesitant to address the controversy in Sunday sermons. Ministers aren’t widely in attendance at protests.

At demonstrations across the Lowcountry that have seen several hundred of people at a time, Emanuel AME’s Rev. Eric Manning has been one of just a few clergy present.

He was one of a handful of preachers who came to show solidarity at a Black Lives Matter march that drew 200 on June 1 in North Charleston.

After weekend of chaos, more protests in SC have businesses reeling and protesters enraged

Manning also recalled a demonstration on the Charleston peninsula soon after Floyd’s death when Manning “would’ve hoped there would have been more clergy.”

Part of the reason churches aren’t as central in social efforts is due to the current diverse makeup of traditionally Black communities.

Today, the average member travels by car several miles to church for worship, not to organize for social justice and collective action.

There are ministries passionate about equal rights and activism, such as the Charleston Area Justice Ministry. The organization has worked for years to unite faith leaders in the Lowcountry around issues impacting the region, such as criminal justice reform, affordable housing and transportation.

But such ministries weren’t needed in mid-1900s because churches would not hesitate to speak out against injustices, Middleton said.

“Our collective impact is dispersed because we are now geographically scattered,” he said.

The decline in church membership and youth involvement in houses of worship has also been a factor. This coincides with the fact that protests are often youth-led and the demonstrations galvanize heavy support using social media, a platform clergy may not be using.

Additionally, many religious leaders are pressed for time amid the ongoing global pandemic. Pastors are attending to a number of sick parishioners, doing virtual services and also watching out for their own health.

“The church during the pandemic is busy,” said the Rev. Nelson Rivers, pastor of Charity Missionary Baptist.

Differences in ideologies have long existed in social justice efforts.

The Rev. Martin Luther King Jr. advocated for nonviolence but also described rioting as the “language of the unheard." Nonetheless, King sometimes found himself at odds with militant leaders, such as The Black Panther Party and Malcolm X, who disagreed with the peaceful protesting approach.

Some of those differences are on display today. Shaped by their theology, clergy often choose nonviolent action as they say it lines up with Scripture. They feel it commands the attention of elected officials while also not giving the opposition a chance to discredit the movement.

But some youth activists would rather openly express their anger. They feel damaging business is an attack on the symbols of a capitalistic society. And they feel it also commands the attention of political and business leaders.

It's also about Breonna Taylor. And Ahmaud Arbery. And many other Blacks who have been killed by law enforcement.

It's about the fact that years after the legislative gains made in the '50s and '60s, discrimination still manifests itself in so many other areas, such as Blacks dying disproportionately from COVID-19, owning one-tenth of the wealth of White Americans, or having their sanctuaries targeted for violence.

Today’s generation is angry. And they aren’t locking arms and singing “We Shall Overcome” to advocate for change.

Some are breaking businesses’ windows and defacing Confederate monuments.

John C. Calhoun statue taken down from its perch above Charleston's Marion Square

Eric Manning II is the chair of the Lowcountry Young Democrats. He was among other activists who, after Mayor John Tecklenburg announced the John C. Calhoun statue would come down, vandalized the monument.

Manning, who also is the son of Emanuel AME’s the Rev. Eric Manning, isn’t apologetic. He said the action was a result of frustration because the city offered little clarity on a timeline for removal.

He feels somewhat similar about the damages to businesses in downtown Charleston earlier this year.

“Some businesses value their stores more than they value Black lives,” he said. "A business can fail, but you can file for bankruptcy. Once that life is gone, that’s it.”

Manning II is part of a generation he defines as the “new social justice era,” a time when the video of the police officer holding his knee on a man’s neck is widely circulated.

His father supports peaceful protesting as a way to not give fuel to others who want to speak negatively about social activism.

“I would always support the peaceful protests and marches and never being violent,” the minister said. “When you do, you’re getting down to their level.”

Manning II understands that viewpoint. After the Calhoun incident, some clergy pulled the younger Manning and others aside and discussed how property damage creates room for opposition to condemn activism.

The conversation helped some of the youths realize that both they and the ministers share similar concerns.

The statue came down shortly thereafter.

In an age when protests and civil rights demonstrations are led by a diverse group of young activists and grassroots groups, ministers see their role as one that advises youths and shows solidarity without trying to steal the spotlight.

For the elder Manning, it also has included physically using his body as a shield when police clash with demonstrators.

A few days after the riots in downtown Charleston, Manning went to the Black Lives Matter rally in North Charleston. The group of about 200 protesters blocked East Montague Avenue and faced off with officers.

A protest that started peacefully had become heated. Law enforcement, many dressed in riot gear, were accompanied by at least one SWAT vehicle, several jail transport vehicles and two military-style Humvees. At some point, officers moved in unison, driving lines of protesters back toward City Hall. Some of the marchers threw water bottles at officers who then ran in pursuit.

Manning had been in the fray. He saw law enforcement push demonstrators on the ground.

Manning posted on social media decrying police tactics. He said law enforcement had used excessive force. One of his roles at protests is to help ensure that young people are protected, noting police may not use extreme tactics if they realize “prominent people” are in the mix.

“It was too important for me to sit on the sidelines and allow the injustices to continue to take place in our community,” he said.

Some clergy have been supporting those locked up after protests.

Latisha Imara, founder of the Black Liberation Fund, said the group has also received support from faith leaders. The fund is a grassroots effort to raise bail money for those facing protest-related charges.

A few clergy members showed up in support at the Charleston County jail months ago on a night protesters were arrested. Two Rivers Church has also donated funds and money to help the group buy resources.

Imara said the support from Two Rivers, where she attends, stems from a lengthy connection. She was one of other Black Lives Matter group members invited to the church years ago.

One key way clergy have been aiding the movement has been by offering wisdom, guidance and training.

Rivers, the Charity Missionary Baptist minister, has long been on the front lines of addressing injustices. Having once served as the state leader for the NAACP, he is the vice president for religious affairs for the National Action Network.

In that role, he continues to publicly speak out. This year, NAN denounced U.S. Sen. Tim Scott’s Justice Act as “woefully inadequate” in addressing longstanding issues in police misconduct and state-sanctioned violence.

But in the background, Rivers and others have been offering one-on-one training via Zoom for young demonstrators. He taught them how to plan effective protests and the importance of having specific demands.

One of the activists he trained was Eric Manning II.

Before their conversation, the young demonstrator had felt that the older generation didn’t take things as seriously as they should. He felt their tactics had ultimately failed, and it was time to apply more pressure.

But his talk with Rivers showed him a different perspective. He learned peaceful protesting gets youths in the door with elected officials and law enforcement, opening up room for discussions that can lead to change.

It offers a glimpse into what's to come: two generations gleaning from each other to force progress.