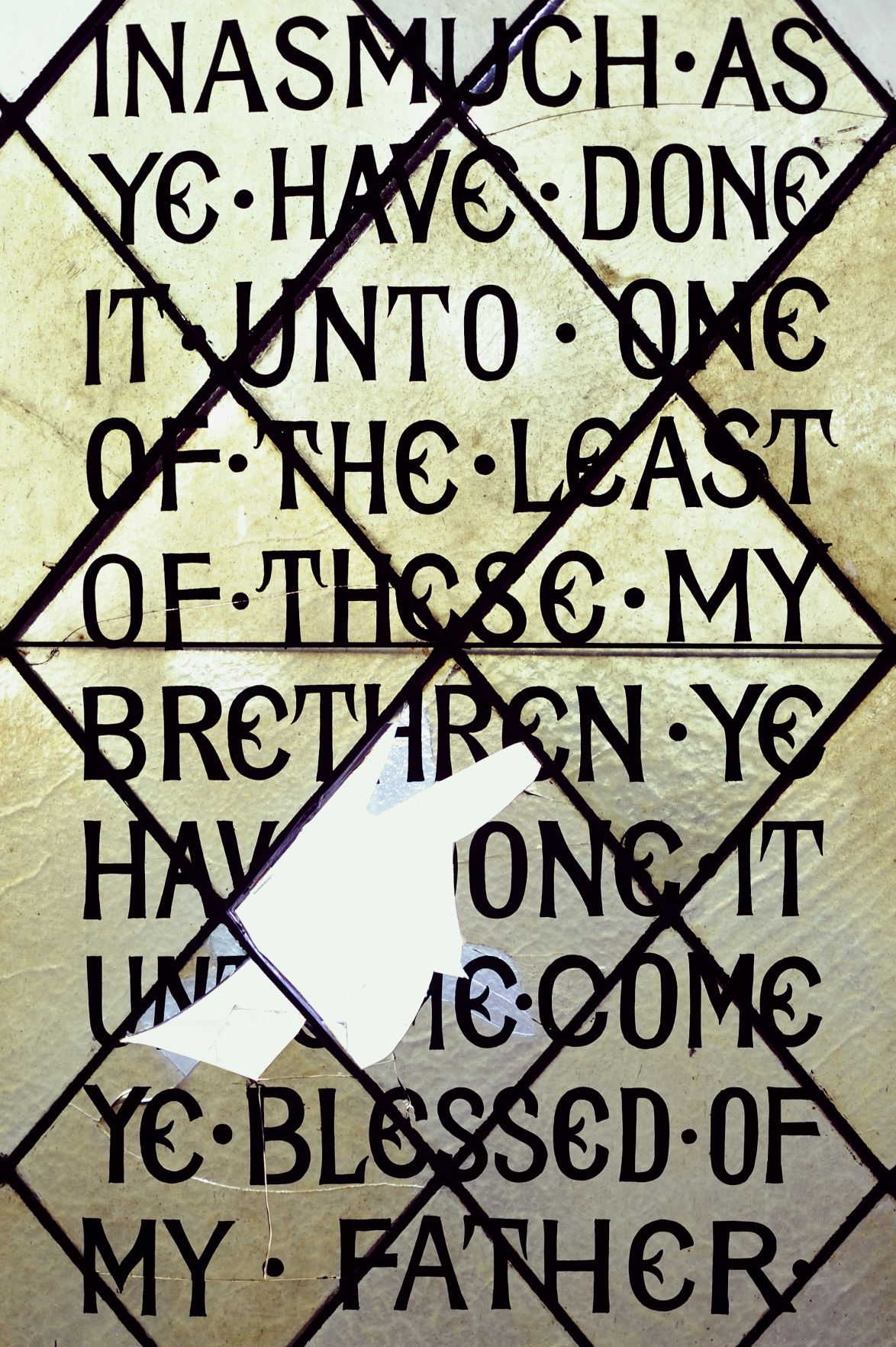 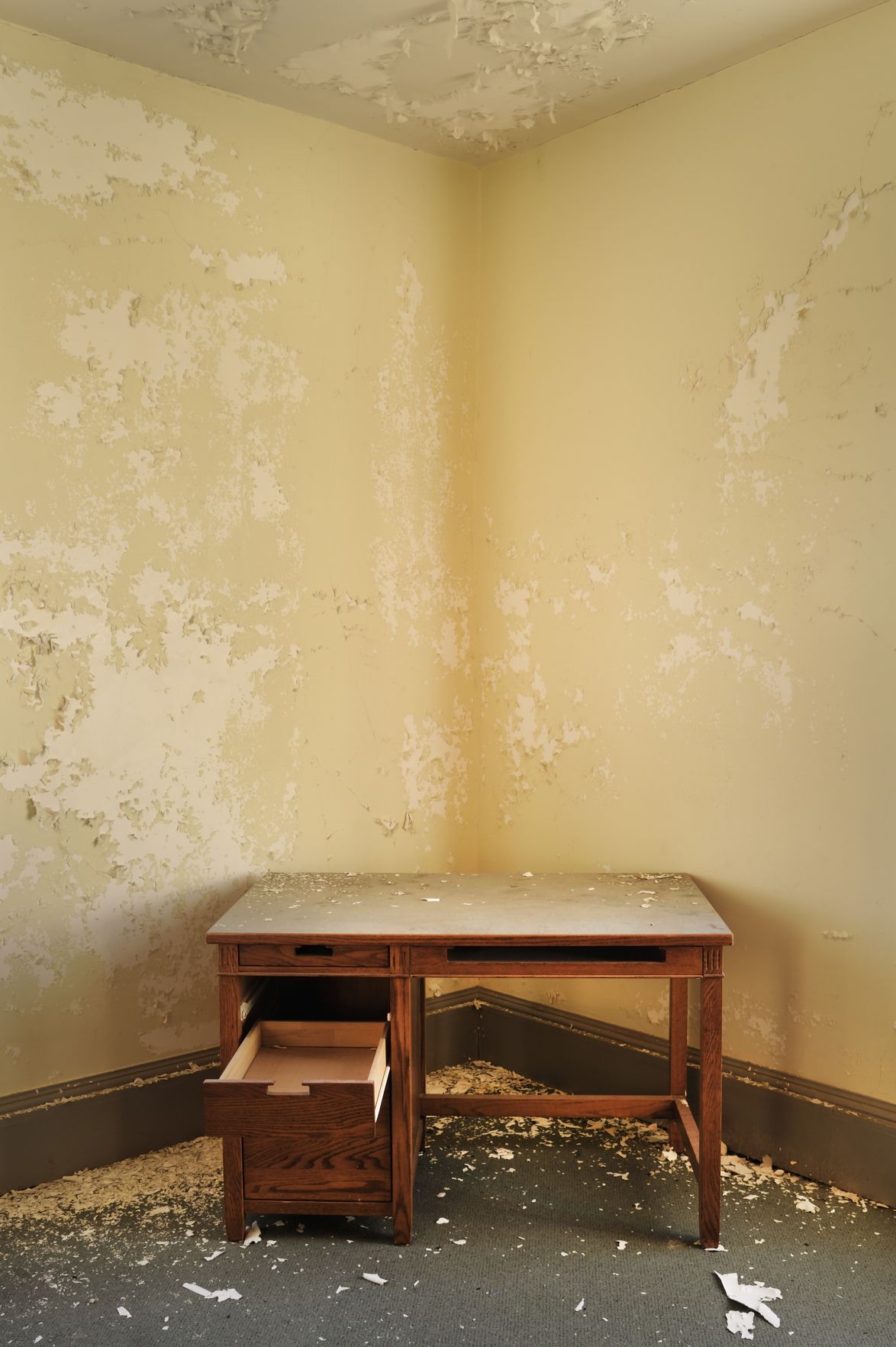 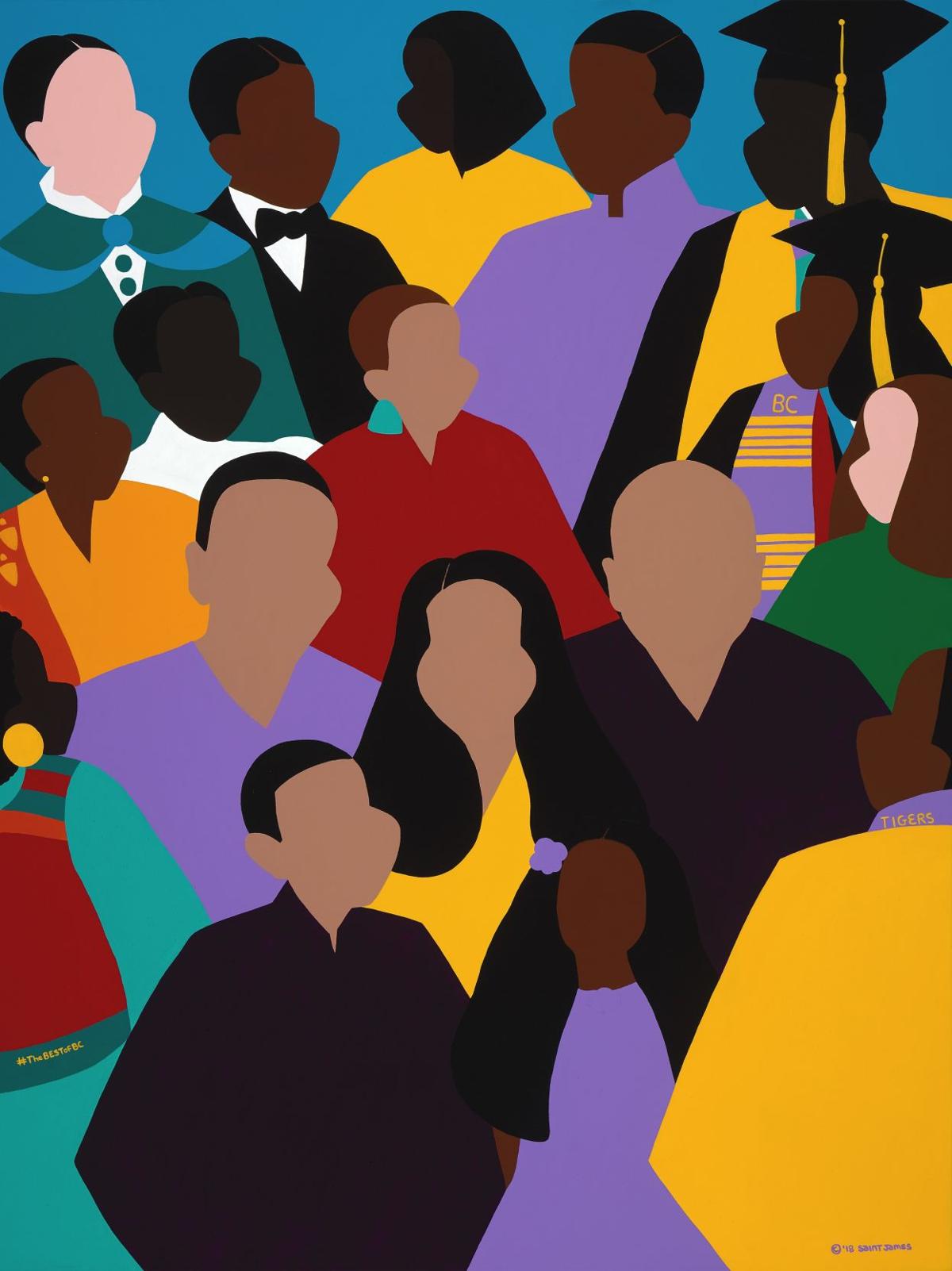 The work of artist Synthia Saint James is now on view at City Gallery at Waterfront Park. Provided 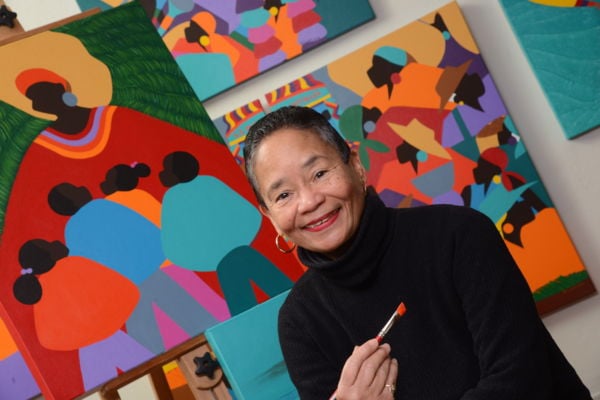 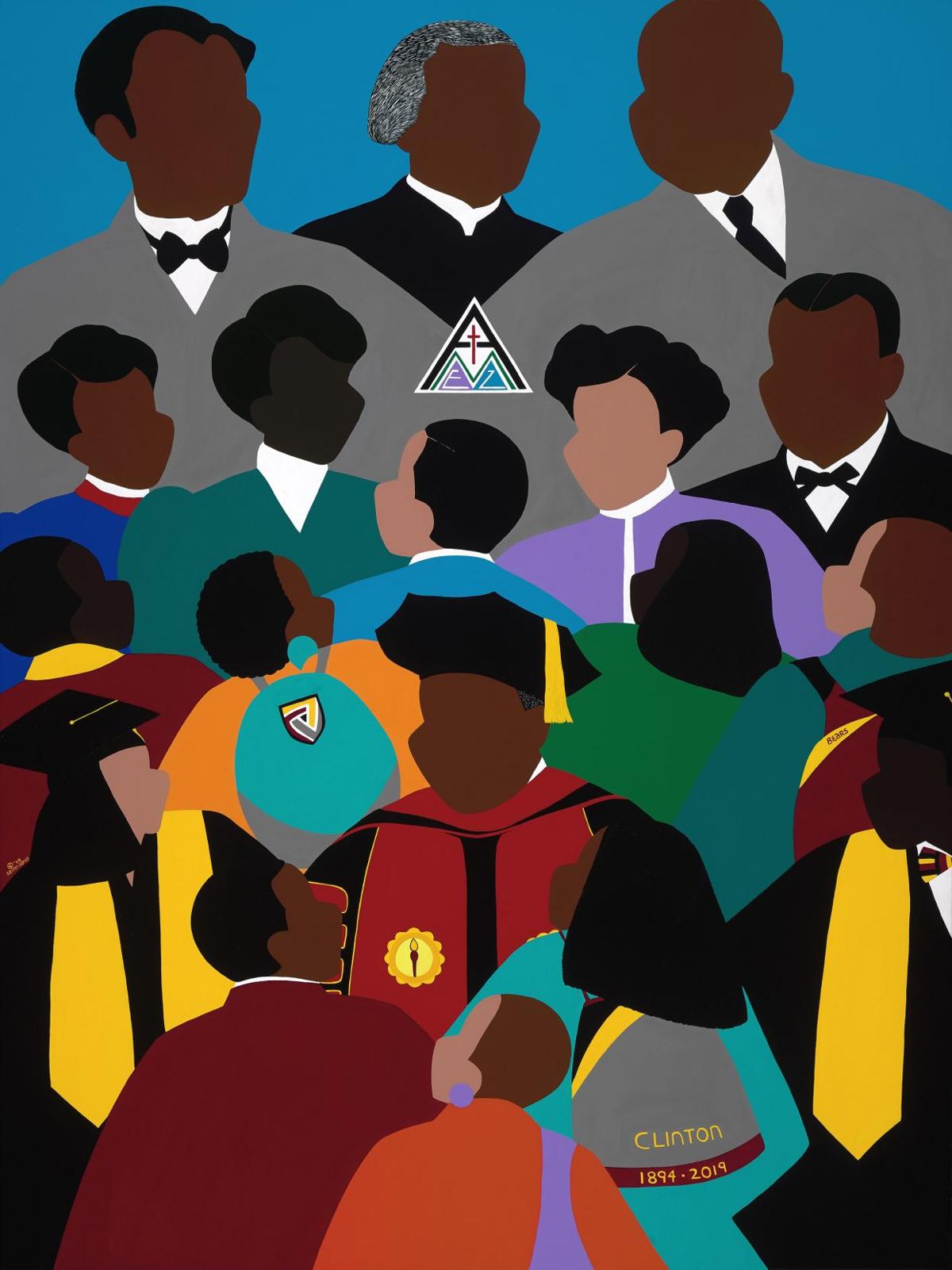 Historically black colleges and universities established before 1964 have much to tell us about the trajectory of the American dream.

Their emergence, which mainly took off following the Civil War, enabled newly freed African Americans their first collective chance at striving for the achievement that comes through education.

The struggles for survival of some HBCUs offer a lens into our country’s abiding socioeconomic divides. The vitality of those that have remained dynamic hubs of education can offer optimism to aspiring college students in increasingly tricky times.

The past, present and future of HBCUs also serve as the overarching subject of two concurrent shows now on view at City Gallery at Waterfront Park. “Without Regard to Sex, Race, or Color” features the work of Georgia-based photographer Andrew Feiler. “HBCUs: Creating Power Through Education” shares the giclee prints of California native Synthia Saint James.

Feiler’s work, which entailed a year’s worth of visits to Morris Brown College, in Atlanta, was informed by a single, striking statistic. Approximately 100 HBCUs remain in operation, a mere 3 percent of colleges in America. However, they represent more than 10 percent of African Americans who go to college and more than 25 percent who earn degrees.

With this in mind, Feiler found his way to Morris Brown's financially and academically imperiled campus. Tripod in tow, he wandered the once-proud, abandoned buildings, some of which dated back to the earliest years of the circa-1881 institution.

There, he trained his eye on desolate dormitories, eerily vacant classrooms and other spaces emblematic of college days, documenting their states of disrepair, chronicling the paucity of human activity, which was gone but for evidence of the homeless who were known to roam throughout them.

Review: A-list actors read parts of the Mueller report — and you can watch them on YouTube

Feiler, a congenial and quietly intense man, also came fully loaded with a perspective informed by his rigorous research on the role of HBCUs in affording African Americans an inroad to this country's prosperity.

He aimed to convey their narratives through his work, which avails of subtly clean lines, considered compositions, and depth-enhancing apertures that serve to draw out and magnify the emotional resonance of each mournful scene.

Frame after fastidiously considered frame manages to get at both the gutting stillness and unexpected motion, the abject decay and light-filtered grace. Through a shattered hole in a glass window, we view the remains of a residence hall with its now irrelevant sign instructing students to show IDs.

Review: It was a chamber music concert overrun by teens. And that is a very good thing.

In a long-neglected trophy case, a black-and-white photo of yesteryear's bright-eyed champions curls forlornly at the edges. In the formerly august alumni hall, a magnificent, carved piano rests impassively among strewn plastic bottles, awaiting its next player.

Following this reflective, elegiac work, it is then a glorious balm to alight to the second floor of the gallery to be greeted with Saint James’ color-burst of a show, “HBCUs: Creating Power Through Education,” which presents giclees on canvas of her first 12 commissioned paintings regarding fully operating HBCUs.

Saint James, incidentally, was responsible for the artwork for the first Kwanzaa U.S. commemorative postage stamp in 1997. More recently and locally, she was invited to create the poster for the 2019 MOJA arts festival poster.

At the City Gallery, her works include notable South Carolina institutions such as Benedict College in Columbia, founded in 1870, and Clinton College in Rock Hill, founded in 1894. The artist spans other Southern schools as well, among them Alabama State University in Montgomery, which is internationally known for its athletics team, The Hornets, and its marching band programs.

Vibrantly beaming with activity and accomplishment, the works together attest to the artist's eye for rich and forthright color. She lavishes this upon her subjects, forgoing particularities such as facial features and fine lines to opt instead for brightly teeming campus communities in the full tilt of learning.

For each, she folds in points of pride that distinguish the school. For instance, a triangular icon featuring a cross gets a central spot in her Clinton painting. For the Benedict edition, she works in their sports team, the Tigers.

In aggregate, the 12 works enliven the top floor of the galley with the exuberance and potential of education, celebrating liberal arts in some, sports in others, and iconic buildings in others still. Together, they form a swath of seemingly unstoppable opportunity parading along the white gallery walls.

Glimpses of Saint James' saturated swell could be spotted from below, peeking over the atrium ledge as I contemplated the fallout of Morris Brown, so elegantly, masterfully captured by Feiler.

I was thankful for both artistic visions, understanding well how the past, present and future must all be faced and weighed in order to reweave the American dream.