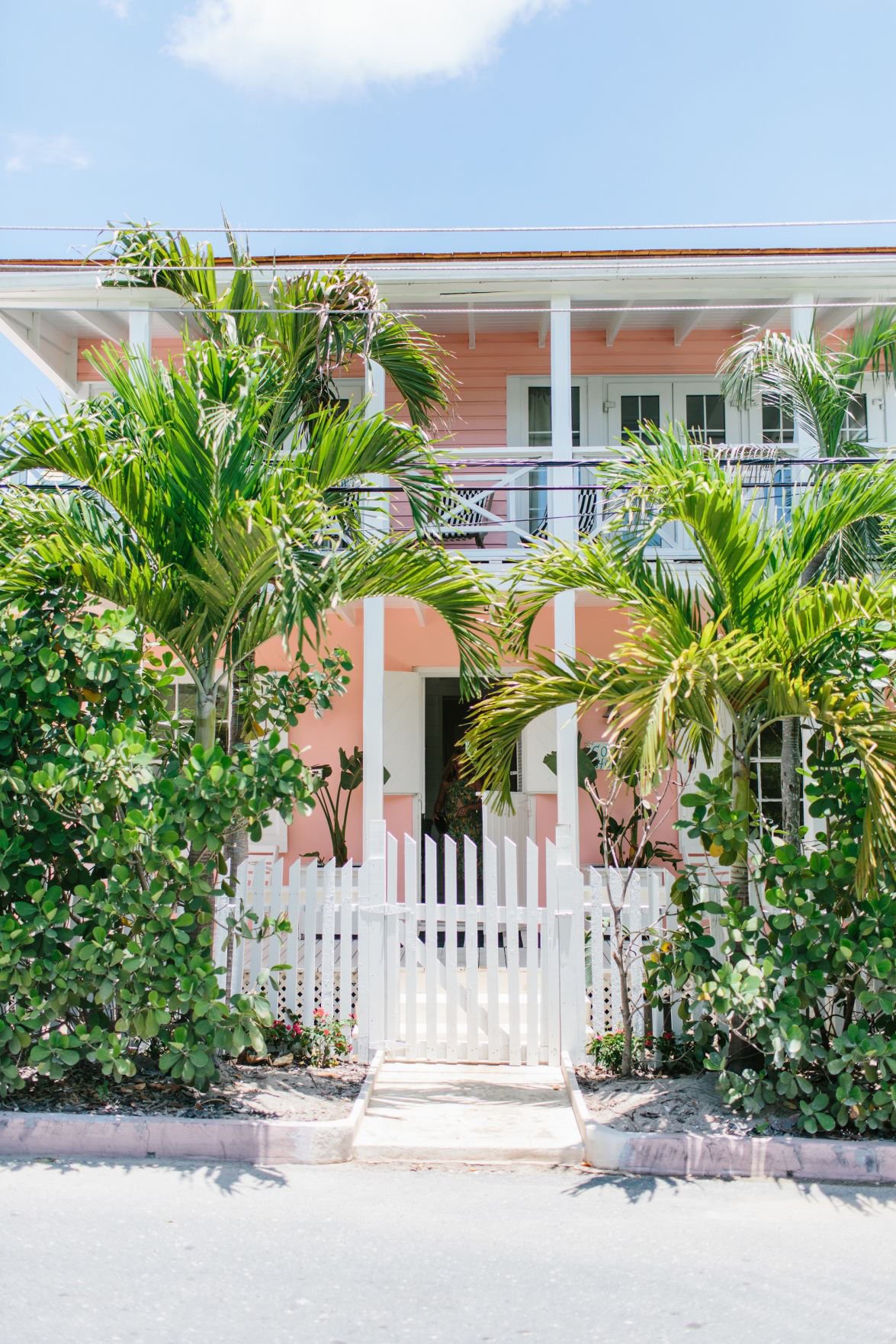 The Evans family was drawn to the historic Coral House on Bay Street in the Bahamas partly because it's on a corner lot and it had room to add a pool. 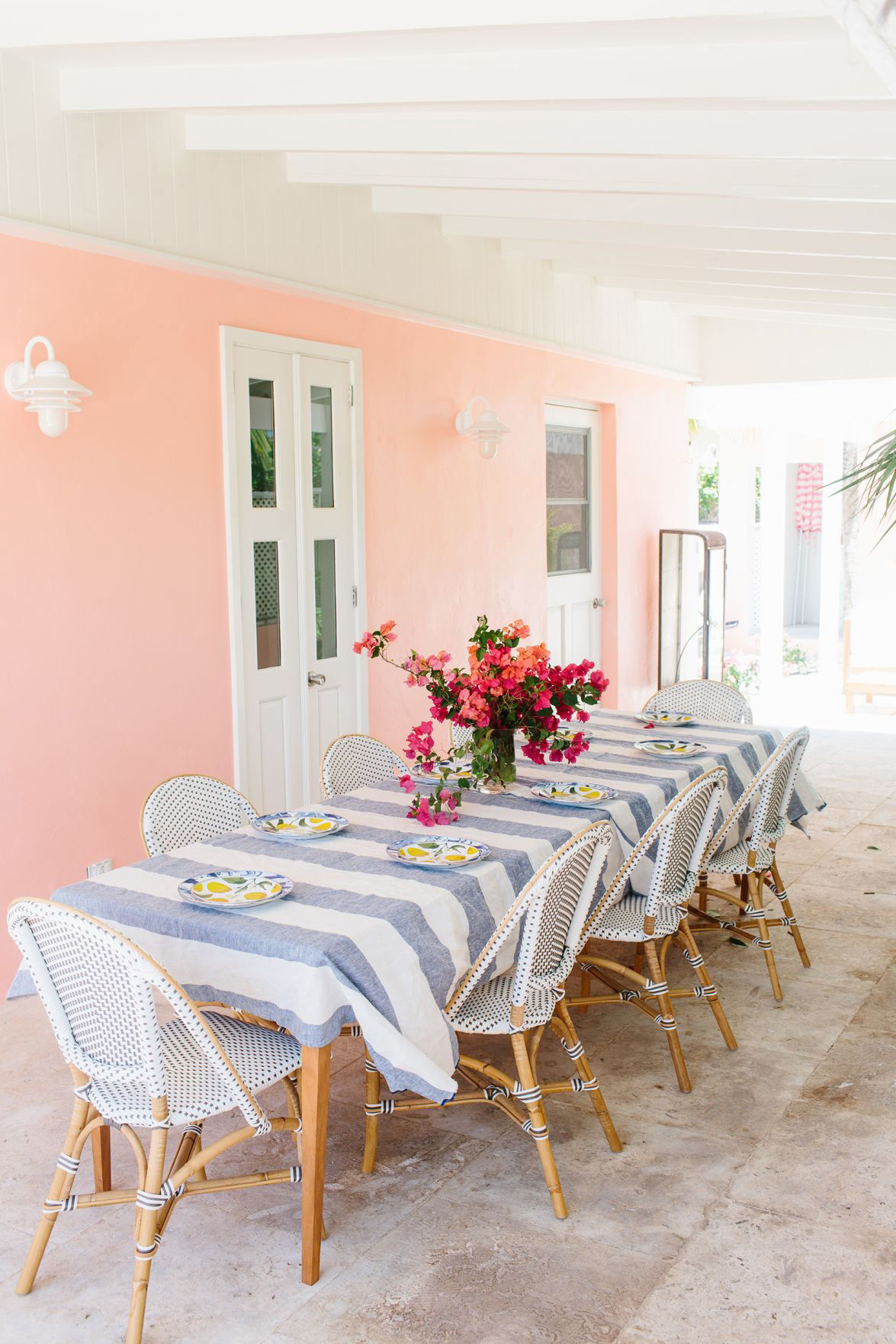 This outside dining area was added to the house during the renovations. 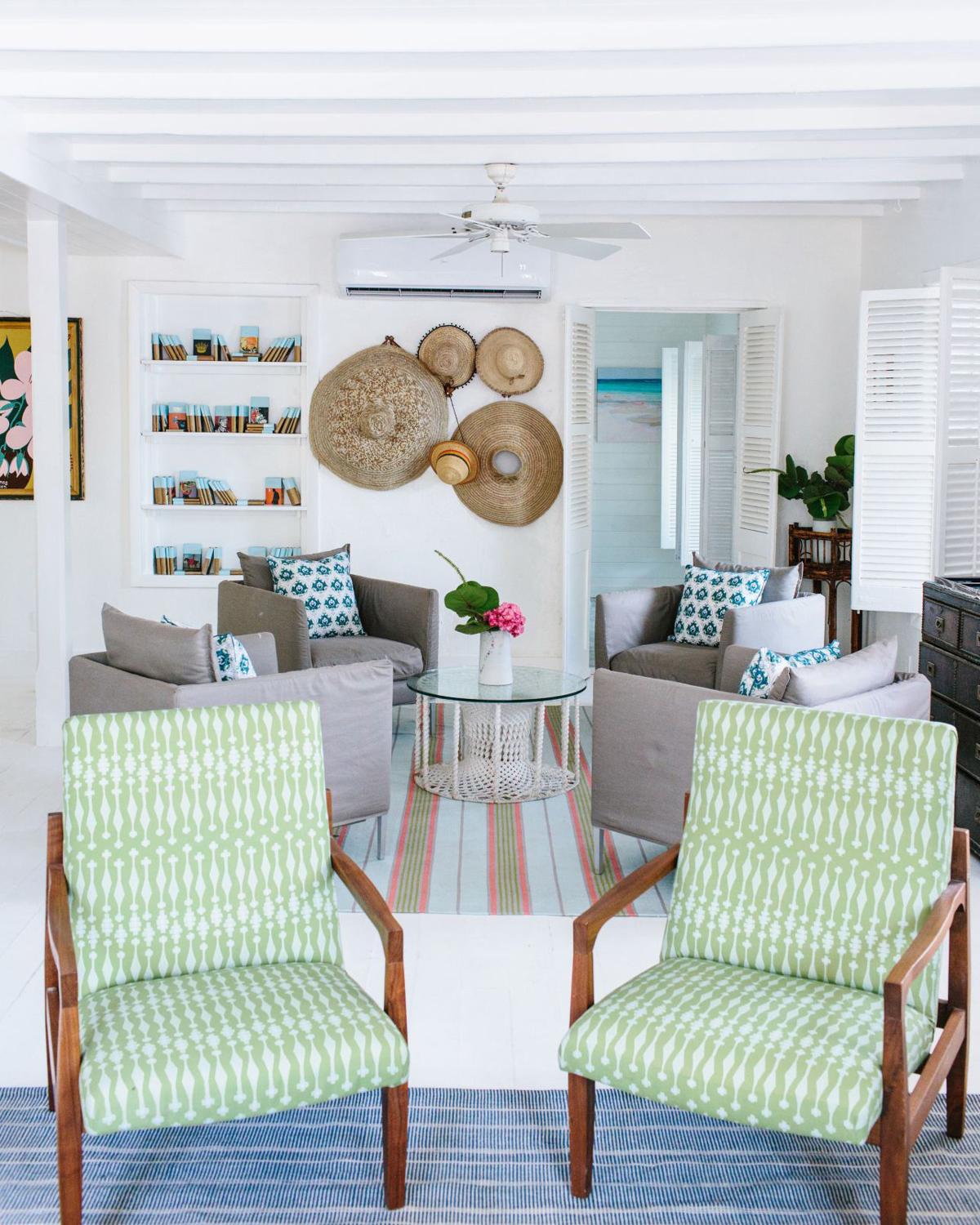 The open concept plan leaves lots of room for entertaining. 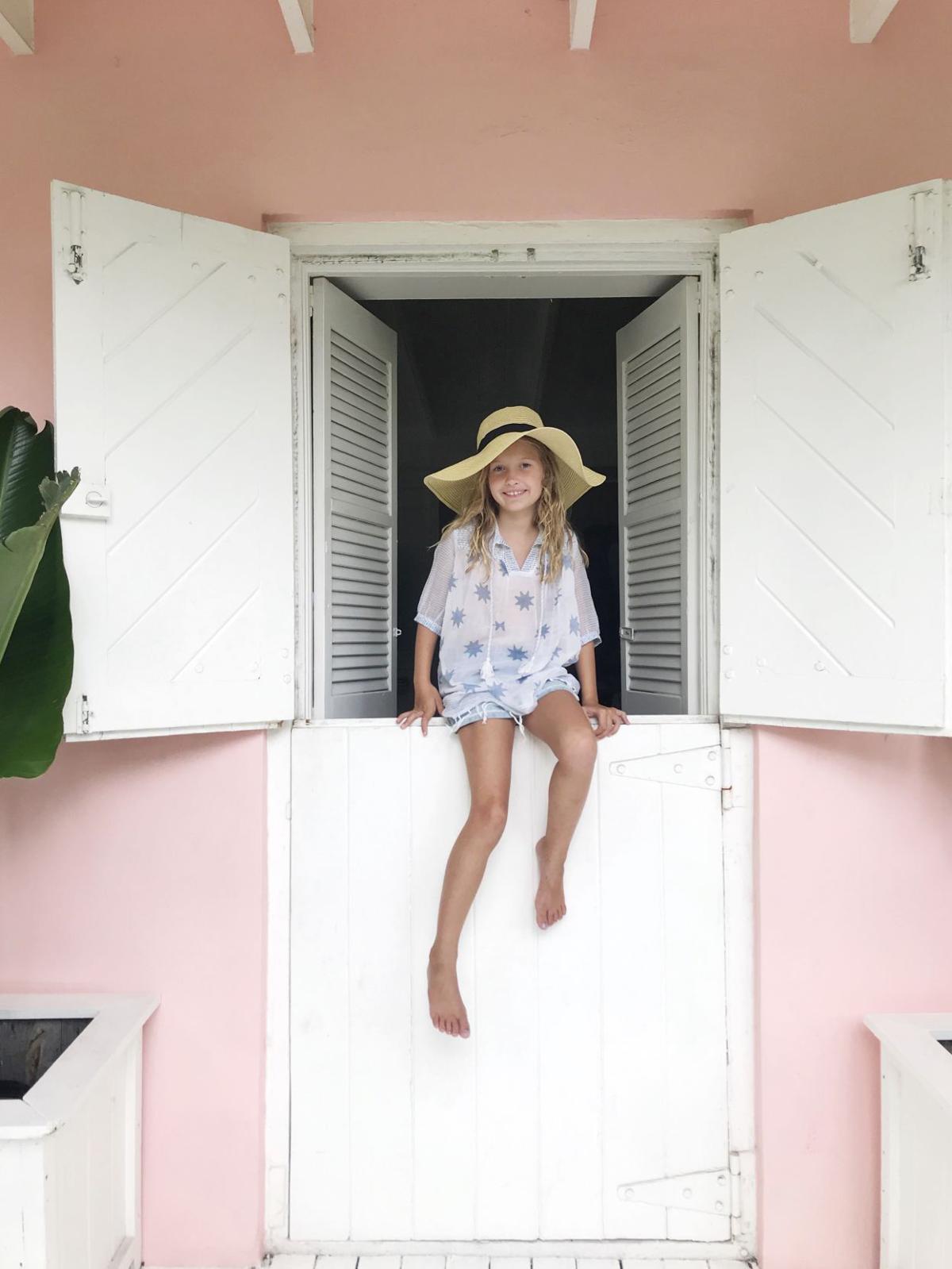 Lilly Evans enjoys the view of Bay Street from the front door of her family's Bay Street house on Harbour Island. 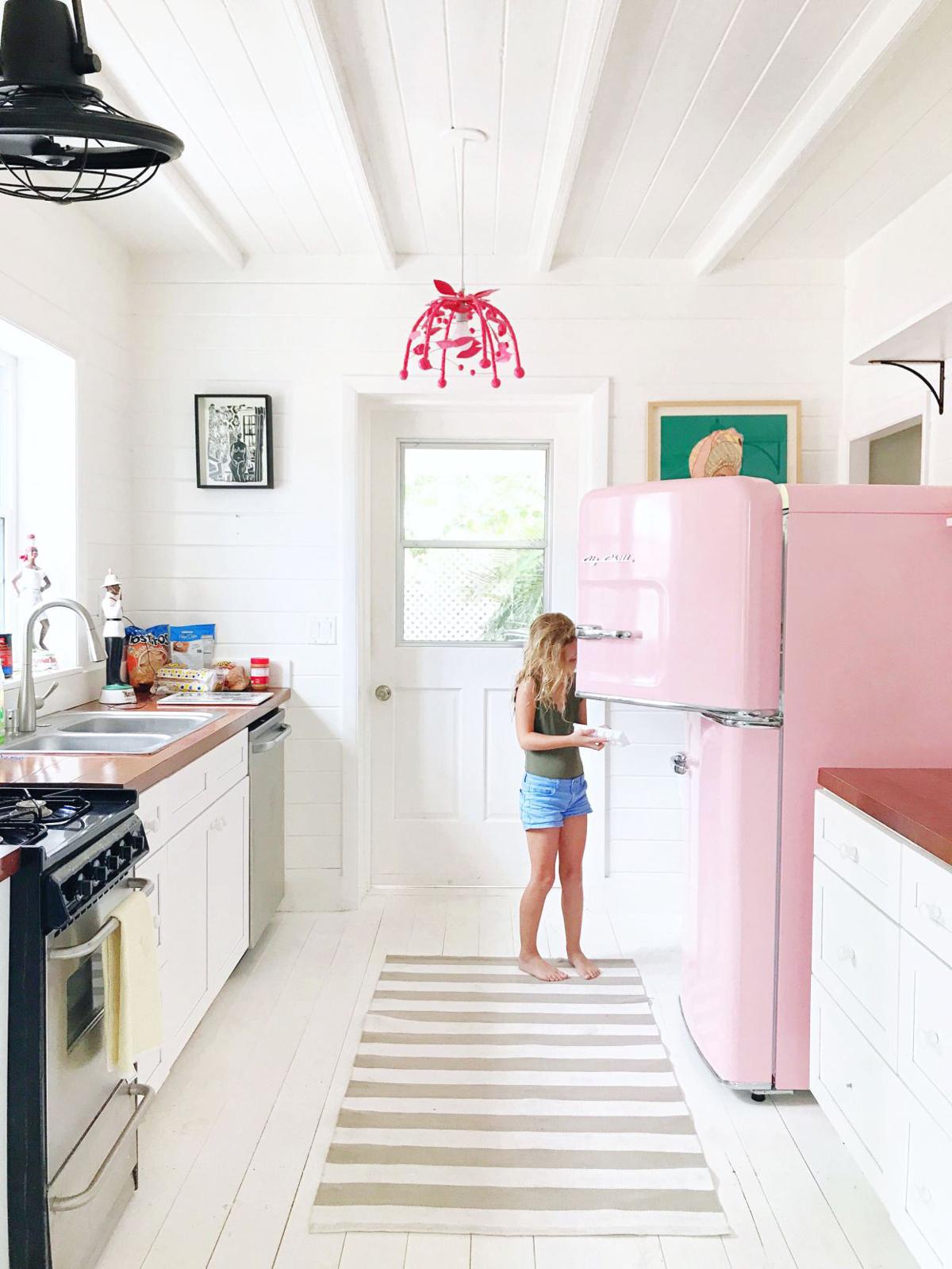 A wall was removed in the kitchen area to create a galley kitchen, complete with a retro-style refrigerator. 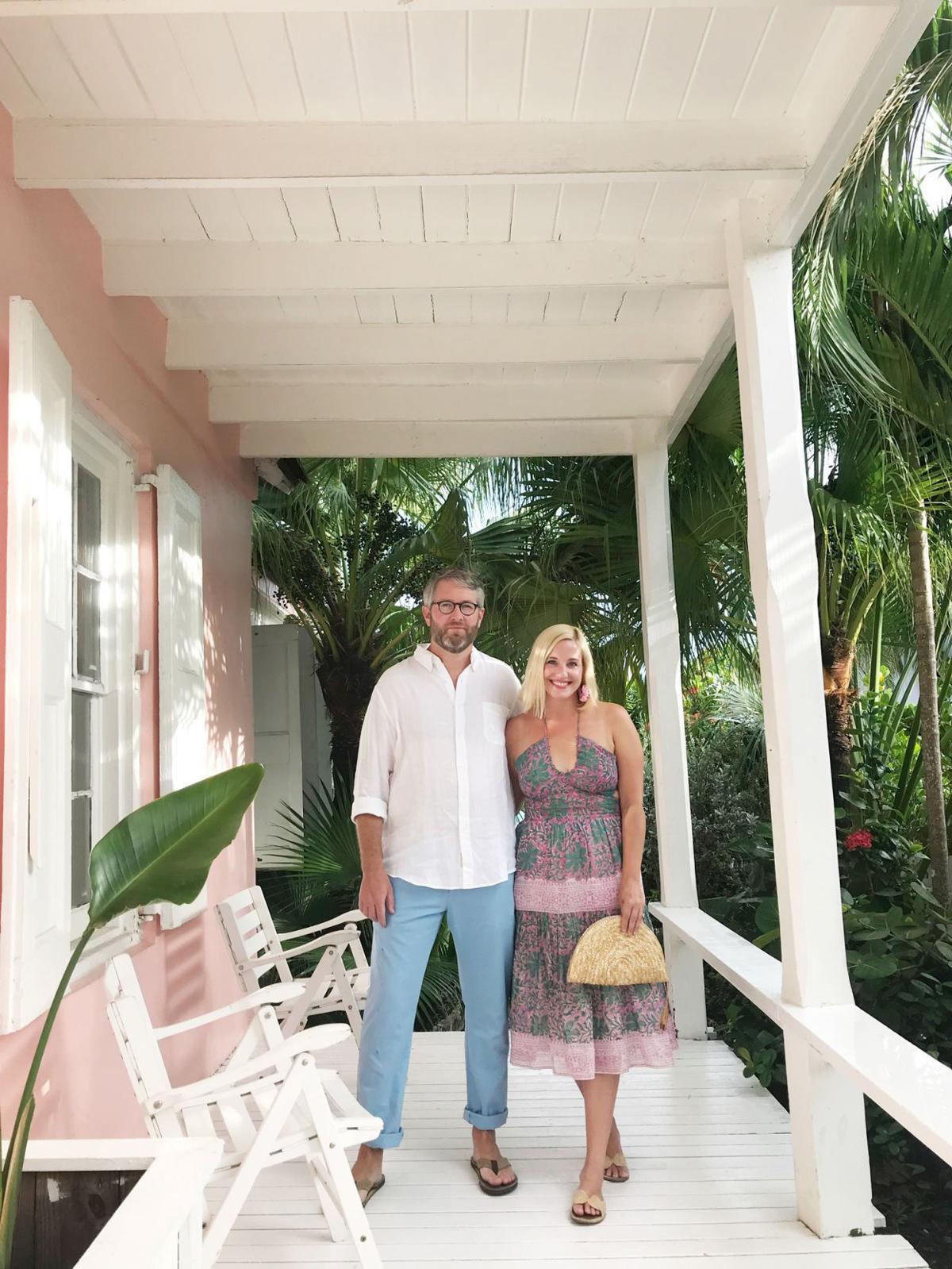 Josh and Chassity Evans on the porch of their Harbour Island home.

The Evans family was drawn to the historic Coral House on Bay Street in the Bahamas partly because it's on a corner lot and it had room to add a pool.

This outside dining area was added to the house during the renovations.

The open concept plan leaves lots of room for entertaining.

Lilly Evans enjoys the view of Bay Street from the front door of her family's Bay Street house on Harbour Island.

A wall was removed in the kitchen area to create a galley kitchen, complete with a retro-style refrigerator.

Josh and Chassity Evans on the porch of their Harbour Island home.

Josh and Chassity Evans were smitten with Harbour Island in the Bahamas from the first time they visited in 2014.

“I totally loved it,” said Chassity, who lives in Mount Pleasant and runs the lifestyle and design blog Look Linger Love. “It was our first vacation there that we met with a realtor and started looking at houses, mainly just for fun. At least, that’s what I thought it was.”

For her husband, a lawyer, it was more of a dream.

“Whenever you go somewhere like that, it’s sort of like, wouldn’t it be cool if …” he said.

After several vacations, the family continued to be drawn to the tiny island, located about about 550 miles from Charleston, just off the coast of Eleuthera.

“It’s hard to say why,” Chassity said. “We just loved it, which tends to be the way most people feel when they go there.”

Ranked as "The Best Island in the Caribbean" by Travel & Leisure magazine in 2015, Harbour Island is known for its pink sand beaches and outlying coral reefs teeming with marine life. Its population is less than 2,000.

Josh liked the friendly people, the social life and the proximity to Charleston. It’s possible to fly on an early flight from Charleston and land in Eleuthera by noon.

Chassity was also drawn to the beaches, boutiques and restaurants.

“You have to take the ferry to get there from Eleuthera, and there’s a sign when you get off that says, “Home to Friendly People,” Josh said. “It’s very true. No one there is a stranger. It’s like Charleston only 10 times more so.”

The main hub, Dunmore Town, is known for its many Loyalist cottages, clapboard-sided homes built around 1800 that resemble the saltbox cottages of New England, pastel-colored and surrounded by white picket fences.

“We looked at a few different houses and the first couple were kind of newer homes and didn’t really feel special,” Chassity said. “Then our realtor showed us an historic home right in the downtown area of Harbour Island, and I think that was what sealed the ‘we want to have a house in Harbour Island’ idea.”

They looked at some renovated cottages and decided that they’d like to renovate one themselves.

“That was when we got more focused, like maybe this is actually possible,” said Josh.

They stayed at an older, unrenovated house during a scouting trip in April 2016, but soon decided “It was too much house, too much money, too much everything. It was beyond our means. It was a good project for somebody but not for us.”

But while they were there, they looked at a house on Bay Street, the island’s main thoroughfare.

Built in the 1800s, the two-story home sat atop a hill on an overgrown corner lot with a large side yard. It was across from the harbor and within quick walking distance to restaurants.

The house was just 1,700 square feet and had only two bedrooms, but it had higher ceilings than the other houses they had seen, and room to add on.

Chassity loved that it was pink and already named Coral House, but Josh saw more.

“It had good bones,” he said of the limestone block house. “It had the space we needed, and it was in the right amount of disarray. A lot of times homes have been renovated in the last five years, so the price reflects that, but you’re paying for work that somebody else did and you don’t want. That didn’t happen there. It hadn’t been renovated recently.”

It took six months to close on the deal. As foreigners, they had to be approved to buy a house by the Bahamian government, and they had to secure local funding there. But as soon as they signed the papers in October 2016, they started outlining the details of the renovation, working with Charleston architect Beau Clowney.

“We had to figure out what we could add on the house to make it rent for what we needed it to rent for to make it a worthwhile investment,” Josh said. The couple declined to disclose what they paid for the house or how much they spent on renovations. On Harbour Island, a 1,500-square-foot cottage last renovated in 1998 is currently on the market for $1.87 million.

In the end, “everything got touched,” Chassity said. All the walls were painted, the roof was replaced and fixtures were updated.

The kitchen was gutted and a wall removed to change it from a “U” shape to galley-style.

To not only be more comfortable for their family but also to attract renters, they enlarged the home, adding 450 square feet of space in two bedrooms with a connecting bath, a 350-square-foot outdoor dining area and a built-in swimming pool.

“There was this really weird little bunkhouse that was too small,” Chassity said. “I’m all about bunkhouses, but this one was just weird.”

“To be fair, it was a concrete block shed that they stuffed two sets of bunkbeds in and called it a bunkhouse,” Josh clarified.

On Clowney’s advice, the couple split the space and created a laundry room and half bath on one side and an open-air poolside bar on the other.

Managing the project from afar could have been a challenge, but the duo said they lucked out when their real estate attorney on the island recommended the contractor who was building his home.

“We interviewed him and just felt really good about him,” Josh said. “We got to see his work at the lawyer’s house. He was good. He was fast, and he was on budget.”

Unlike most construction jobs the United States, in the Bahamas, there were no subcontractors. The same crew did all the work.

“I think the most complicated thing about trying to do a renovation like that in the Bahamas, is that the boat only goes over there once a week, so getting things there is not easy,” Chassity said. “You have to be super-organized to make sure that everything is there for the contractor when he needs it, so you have to plan everything out very well.”

She credits Josh with organizing the shipments of construction supplies and design goods.

“I would just get these emails that said, ‘Pick out your light. You’ve got two hours,’” she said. “And that was when it needed to be in Fort Lauderdale to be shipped.”

Finished in June 2017, the renovations have surpassed their hopes, they said, although busy lives have kept them from enjoying the home as much they would like to and have limited their visits to a handful of long weekends.

“We’ve yet to be able to be there more than a week at a time, which feels like a shame,” Chassity said.

The finished product has four bedrooms, 4-1/2 baths and can accommodate up to 10 guests.

“Another motivation was that this is an investment but we can enjoy it at the same time,” Josh said. “Our kids already talk about which one of them gets the house when we’re gone, and they’re only 6 and 8.”

The house has done better than they hoped on the rental market, bringing in from $850 to $1,000 per night, with bookings coordinated through a property manager on Harbor Island and listings on VRBO and Airbnb.