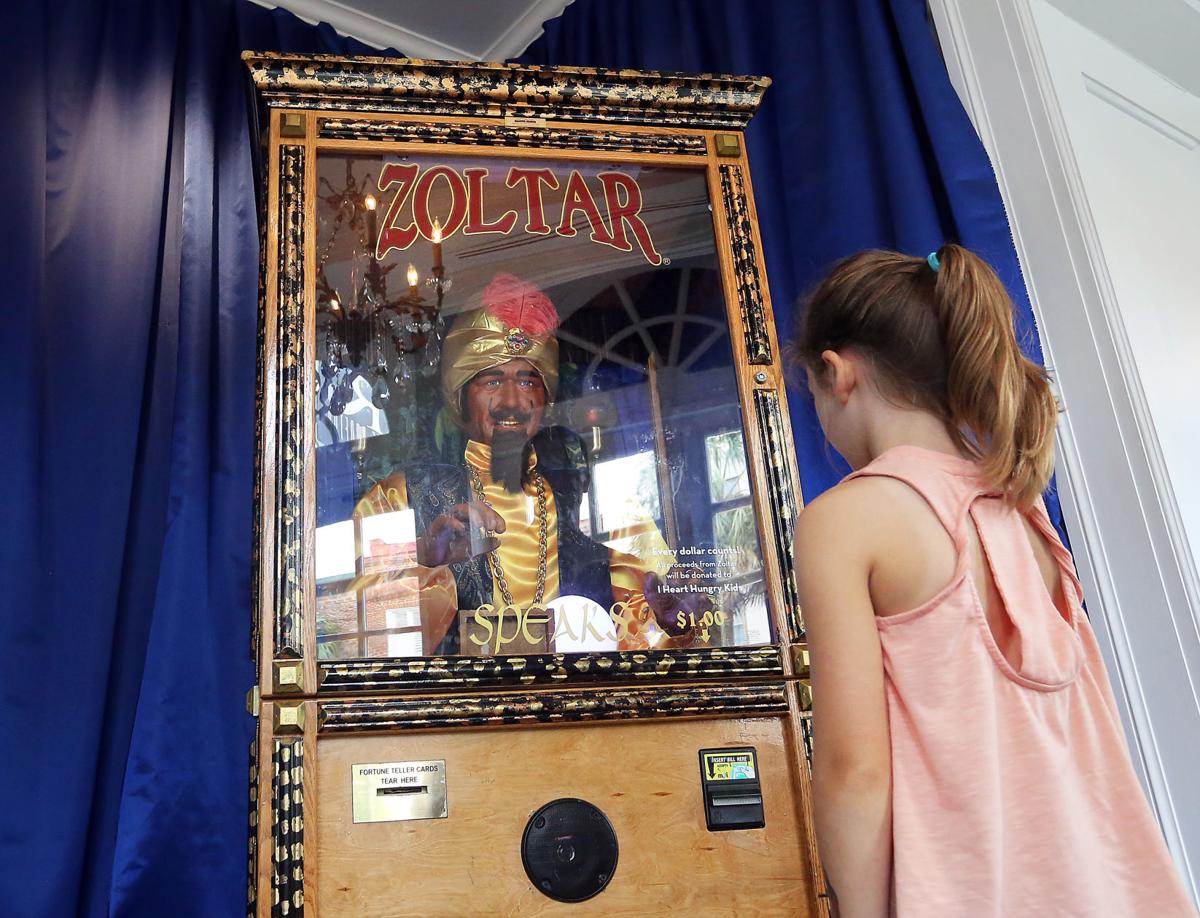 A young girl has a fortune read by Zoltar at The Vendue on Friday, August 2, 2019. Brad Nettles/Staff 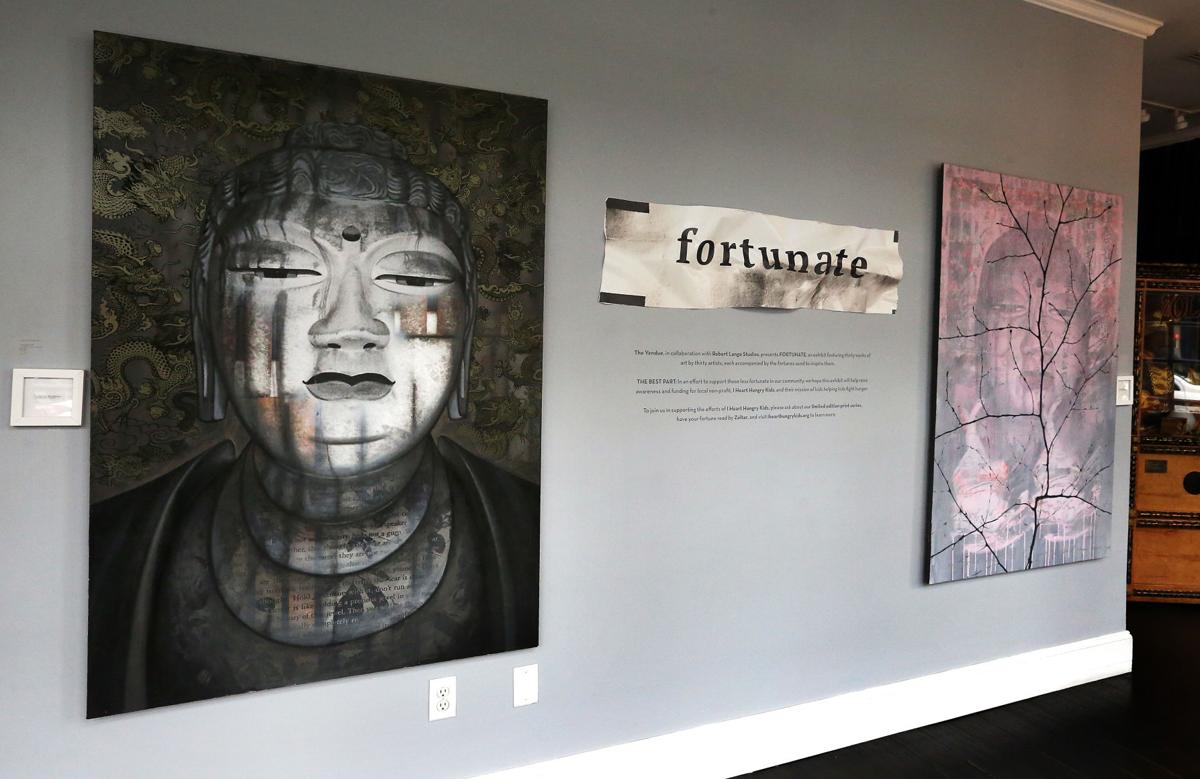 The Vendue, in collaboration with Robert Lange Studios, is presenting "Fortunate," an exhibit featuring 30 works of art by 30 artists. Brad Nettles/Staff 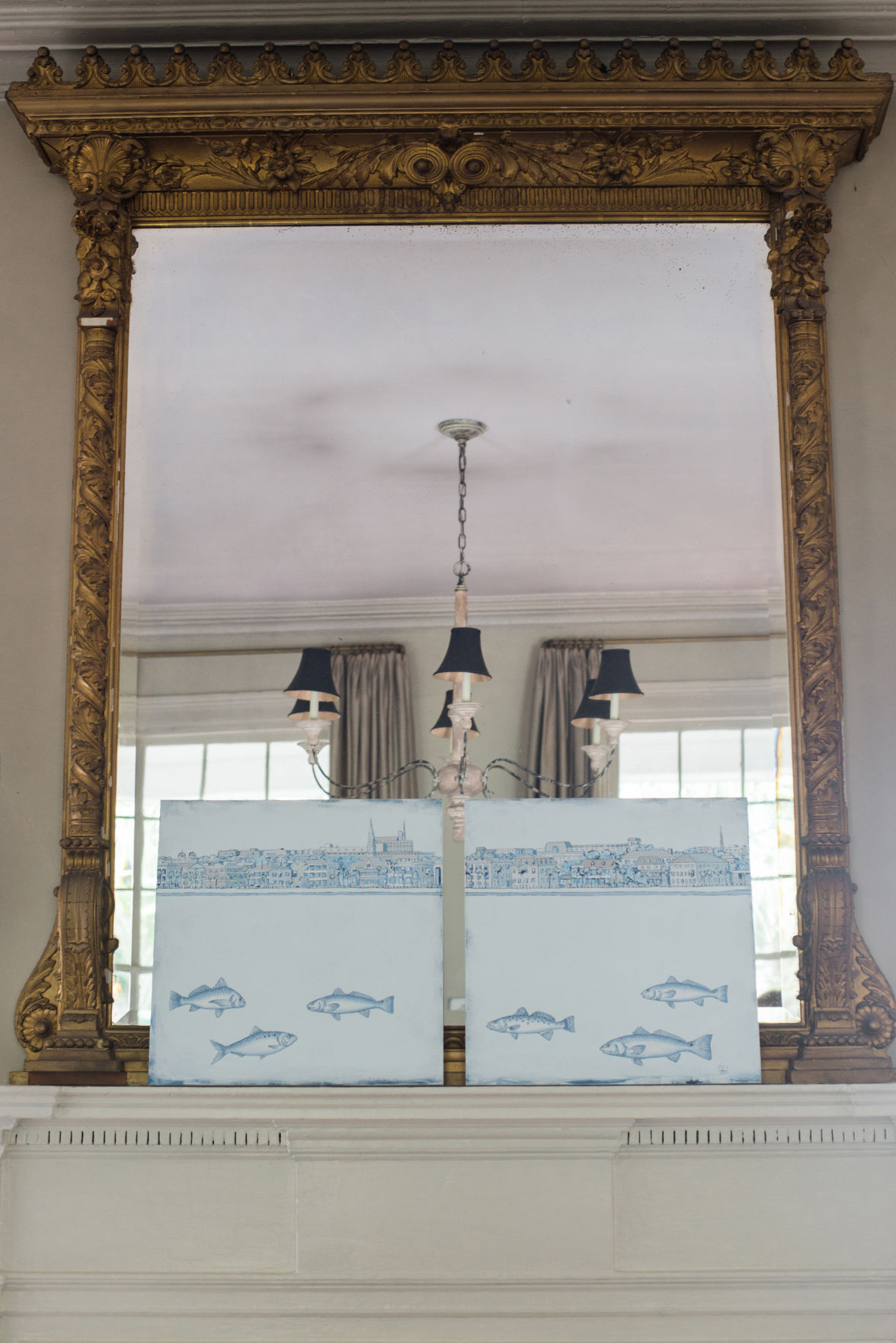 Whitney Kreb's artwork was on display for the George X George pop-up exhibit at Zero George during the 2017 Spoleto Festival. Elisa Bricker Photography/Provided 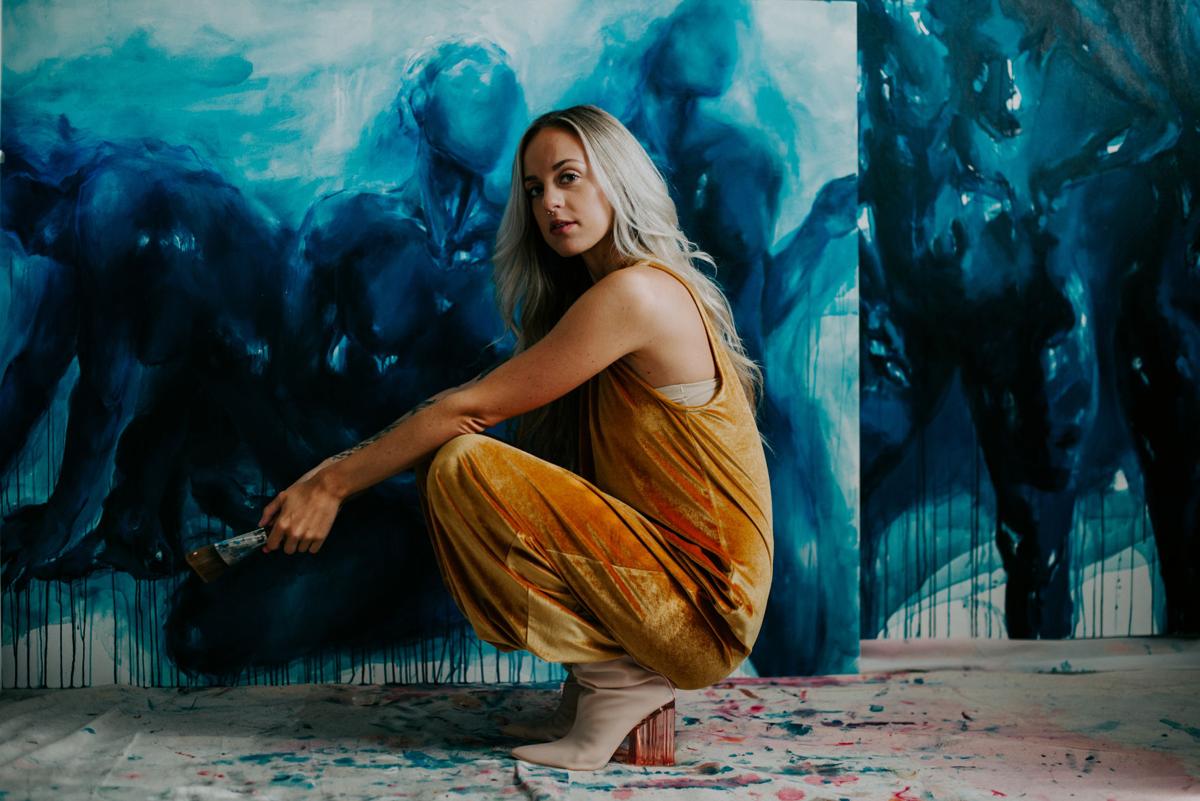 Samantha Rueter works in her studio. Her first Charleston solo show will be at the Grand Bohemian Gallery in October. Nicole Mickie Photography/Provided 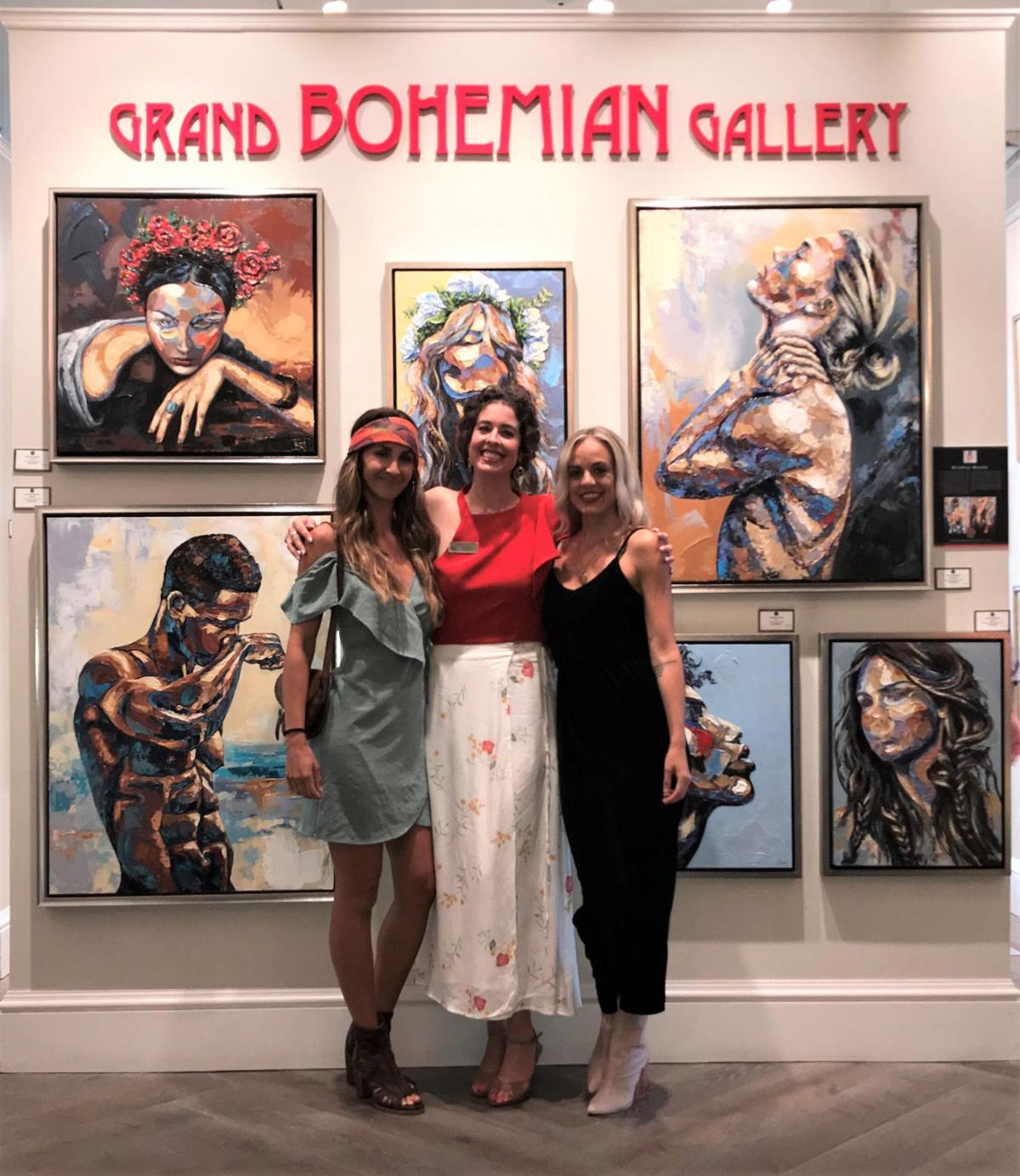 Briahna Wenke, Dayna Caldwell and Samantha Rueter at an art exhibit at the Grand Bohemian Gallery. Wenke and Rueter will each have solo shows there this fall. Provided 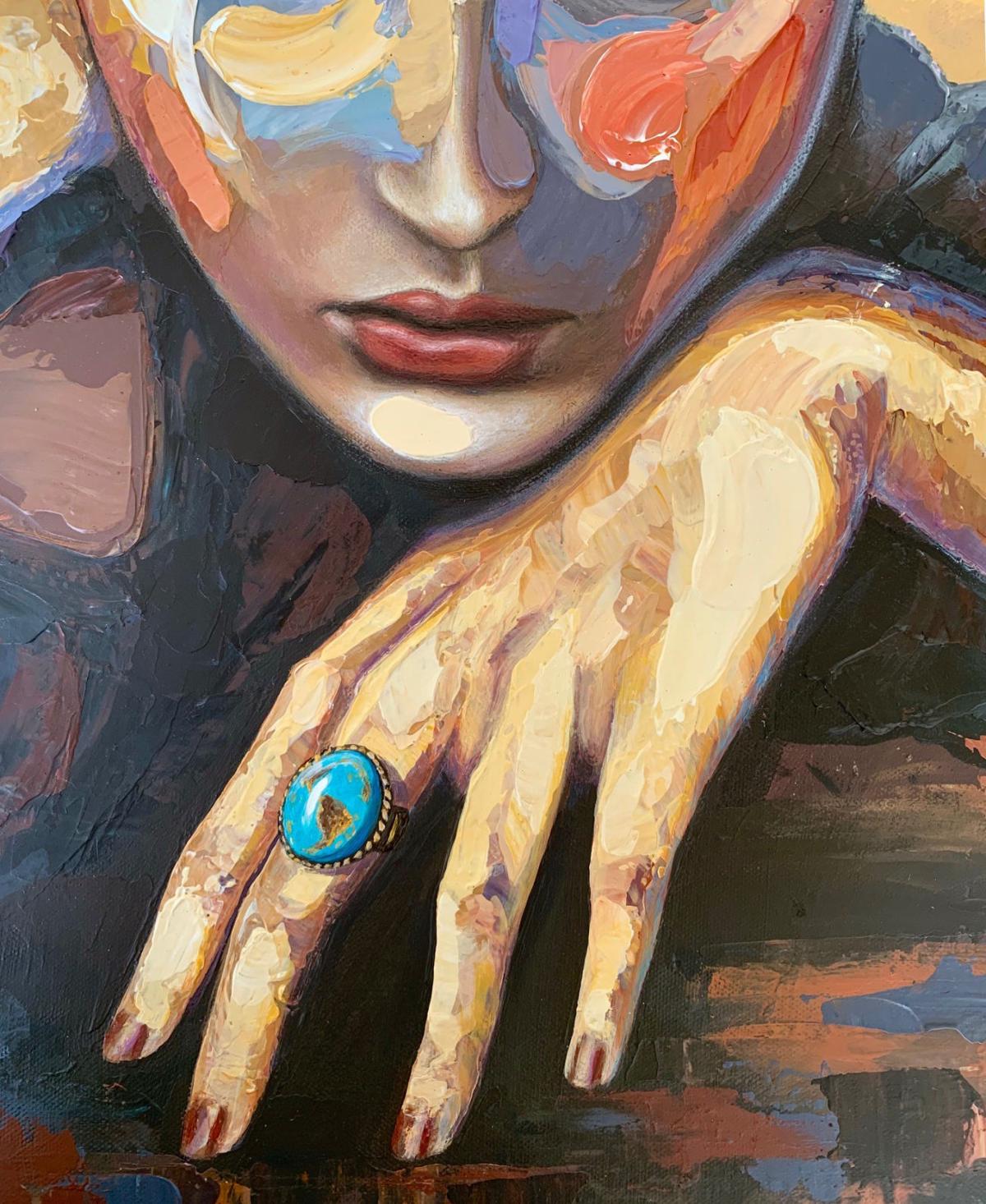 "Victoria" by Briahna Wenke is on exhibit at Grand Bohemian Gallery. The artist will have a solo show there in September. Provided 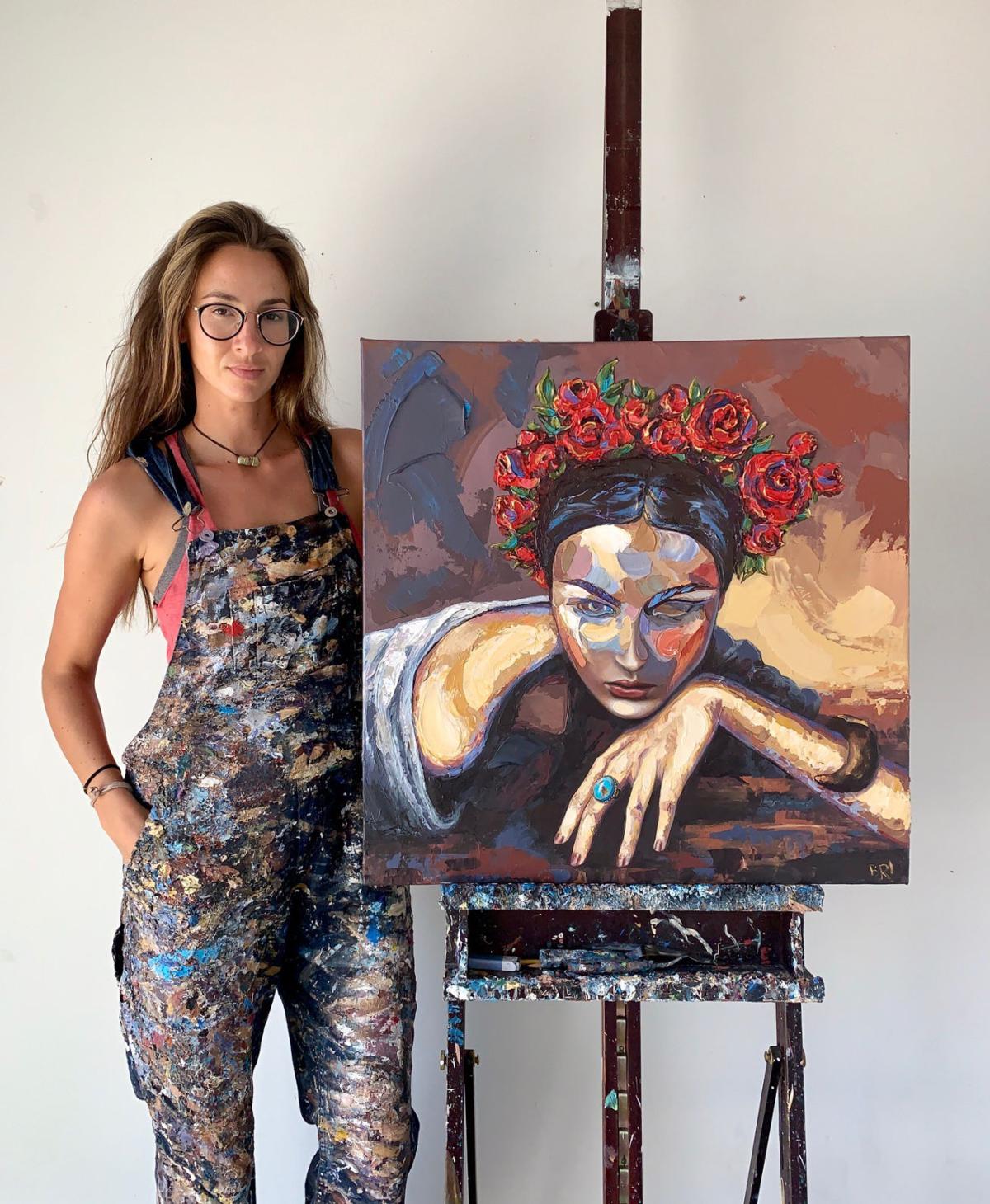 Briahna Wenke stands next to her artwork, "Victoria," which is on display at Grand Bohemian Gallery. Provided 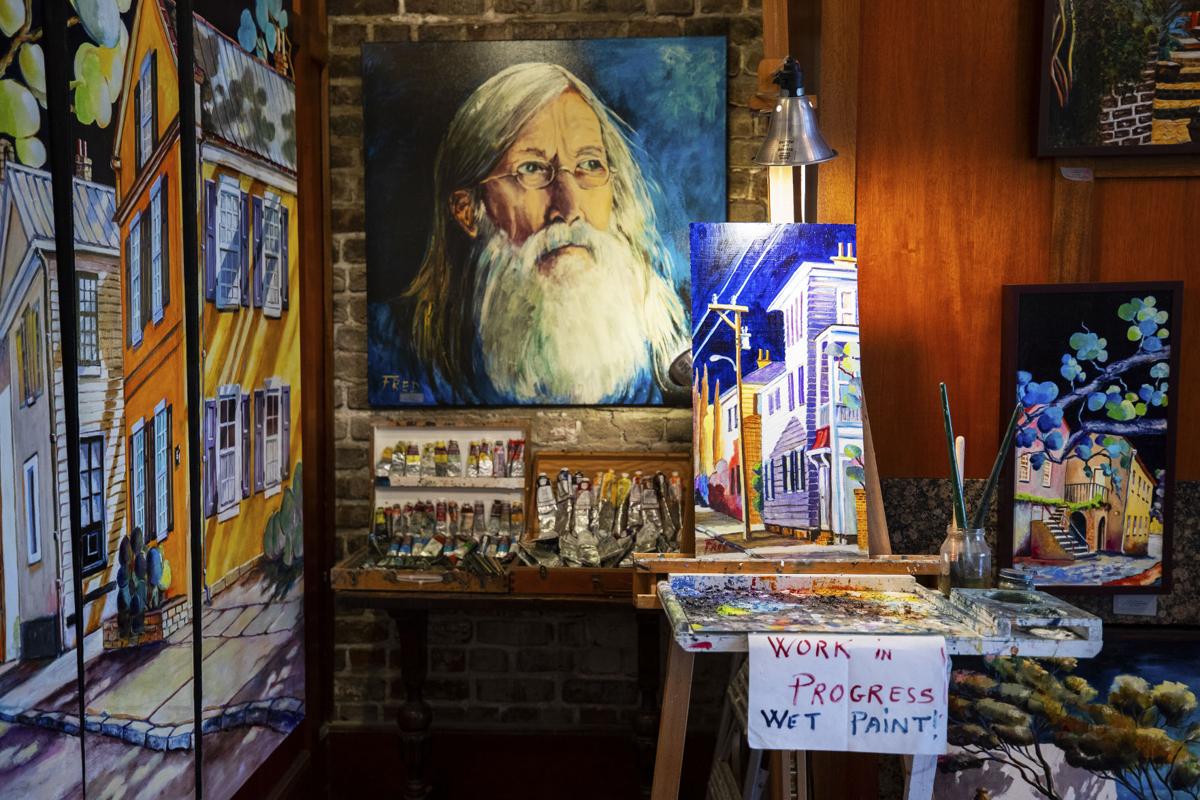 A painting in progress sits in Fred Jamar's workspace at The Vendue on Friday, August 2, 2019. Lauren Petracca/Staff

A young girl has a fortune read by Zoltar at The Vendue on Friday, August 2, 2019. Brad Nettles/Staff

Briahna Wenke, Dayna Caldwell and Samantha Rueter at an art exhibit at the Grand Bohemian Gallery. Wenke and Rueter will each have solo shows there this fall. Provided

On the main floor of The Vendue hotel, there is a giant Zoltar fortune-telling machine tucked into a corner. Enthusiasts of the movie “Big” may recall a similar one from the scene in which a young boy makes a wish with a carnival Zoltar to be big. He is thus transformed into a grown-up, played by Tom Hanks, who retains his childlike wonder.

The turban-topped figure encased in glass at The Vendue produces fortunes for a dollar. The merry machine is part of “Fortunate,” the hotel’s current exhibit of 30 commissioned works that are each inspired by the prophetic slip of paper found within a fortune cookie.

On a recent afternoon, Vendue guests laughingly extracted their Zoltar fortunes, resulting in a lively scene that seemed in marked contrast from a standard hotel lobby tone of unassuming patrons sipping drinks and studying maps.

Zoltar achieves more than that, too. A percentage of the proceeds from the art sales and the fortune machine are going to a local charity, I Heart Hungry Kids, which provides lunches to local schoolchildren who are in need of them, among many other initiatives.

What's more, by disabling the invisible fence between residents and visitors, businesses and artists, The Vendue and similarly arts-supportive hotels offer a prism into the civic potential of our ever-proliferating hospitality sector. Existing and planned properties can — and should — interact with the community in meaningful, mutually beneficial ways. Arts programs are but one illustrative example of that.

In 2012, when Jonathan Weitz of Avocet Hospitality acquired The Vendue, he struck upon the idea to highlight art as the hotel’s point of distinction, informed by the hotel’s gallery-dense French Quarter neighborhood.

“At that point, no one was really focused on the art side of it,” said Weitz, who began his research by checking out 21c Museum Hotel, the visionary boutique art hotel collection based in Louisville, Ky., that has now expanded to places like Durham, N.C., Nashville, Tenn., and Cincinnati.

“We’ve allowed the Charleston arts community to determine what The Vendue is going to look like, show by show,” said Weitz, adding that 16 guest rooms are each dedicated to a specific artist.

There's also artist-in-residence Fred Jamar, who for the past five years has worked from a studio in the hotel's building on the north side of Vendue Range, painting dreamy, color-saturated Charleston scenes set against deep black skies and chatting with those who pop in. Nearby, another gallery holds shows.

This interface between business and art is significant enough that the national nonprofit arts advocacy group Americans for the Arts has initiated its pARTnership Movement program to promote such practices. The group's 2018 survey of the corporate practices of 132 small, mid-size and large U.S. businesses determined that 79 percent of businesses believe the arts improve the quality of life in the community. Its website offers examples of businesses that have done so, including hotels.

There are plenty of others in town that have identified the symbiosis of art and hospitality. The boutique hotel Zero George has partnered with The George Gallery for the George X George pop-up gallery program during Spoleto Festival USA. For the shows, gallery owner Anne Siegfried has commissioned works such as the finely detailed works of Whitney Kreb and the architecturally inspired pieces of Alan Jackson to grace understated walls.

“What we’re trying to do is provide insider access to living like a local,” said Curry Hagerty Uflacker, marketing director of Easton Porter, the company that owns the hotel. “The modern traveler really wants that sense of place, authenticity and connection.”

There is also The Belmond Charleston Place, which has leaned into art since its founding as The Omni in the 1980s. Today, the hotel works with Mary Martin Gallery, located in its concourse, to regularly hang new works and run an artist-in-residence program.

You'll also find murals by local artist Karl Beckwith Smith. His most recent one in the concourse's Community Perk coffee house was installed in June 2018 and offers a welcoming white-and-blue parade of Charleston architecture along the upper walls.

“It is by far my largest client,” Smith said of The Belmond, with whom he has been working for 27 years. “It has not only helped pay my bills, but it also helped me get established here in Charleston.”

The Grand Bohemian Hotel, the branded art hotel that takes a turn for the lavish, boasts a street-level gallery that represents artists from all over. Two Charleston-based artists who made the curatorial cut last year are getting solo shows in the fall. Briahna Wenke’s show launches on Sept. 6, followed by Samantha Rueter on Oct. 4.

“Both are painting pretty much as fast as we can sell them,” said Dayna Caldwell, art gallery director at The Grand Bohemian, who started working with the two emerging artists on a trial basis in 2018.

There are others who spotlight works by iconic locals. The Dewberry finished off its sleek, minimalist lobby with four works by Charleston’s leading modernist, William Halsey, whose estate is represented by Ann Long Fine Art. Owner John Dewberry commissioned work by Charleston native Douglas Balentine, which is displayed in the ballroom and other spaces.

The style-minded Spectator built its permanent display of local works, by way of the George Gallery and keeping with its mix of Art Deco and contemporary chic. Among them is a striking white taxidermy peacock created by artist Becca Barnet, as well as paintings by Tim Hussey and Paul Yanko.

Putting them on view makes a significant impact on the artist community, according to Smith.

“It’s one thing to sell a painting here or there in a gallery, but another to have it displayed in a public space,” he said.

"To have our culture's art showcased in this way and to be able to reach many different people, it gives me great joy and is a very humbling experience," she said in an email. "I love it."

During my visit to The Vendue, Weitz handed me a dollar to find out my fortune from Zoltar. It spat out a little yellow card, and the first sentence pleased: “Your future will be very sunny.” That auspicious news continued with rousing predictions of money, fame and great luck.

So, yes, it appears there are many more hotels on Charleston's horizon. With them are empty walls and ample opportunities. Based on frequent stories of artists and gallerists getting priced out of town, I’m wondering if it’s possible to pay my Zoltar fortune forward.

Why are so many hotels rising in Charleston? We found 12 reasons.

Through continued engagement from both existing properties and the new ventures rapidly materializing, here’s hoping the hospitality sector pays it forward, too.