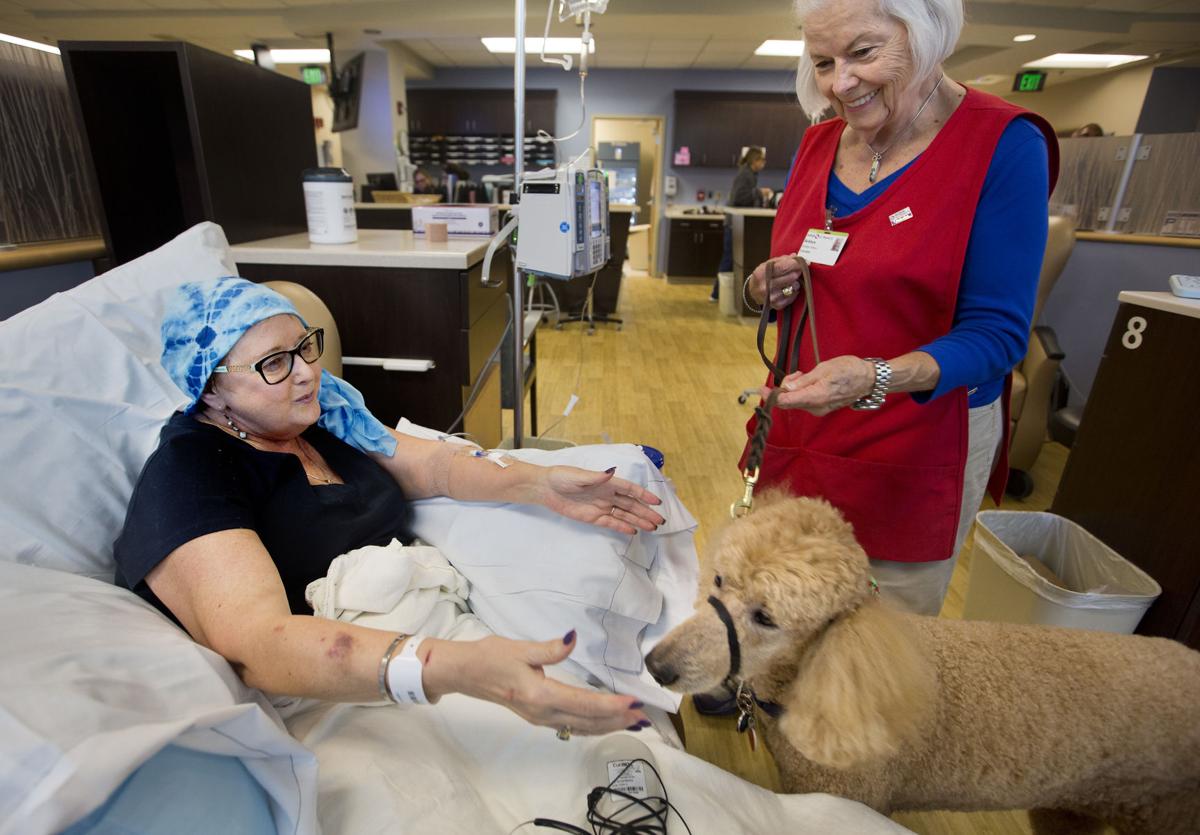 Wendy Bassett, who is being treated for ovarian cancer, receives a visit from Ace and owner Bobbye Wilson at Roper St. Francis Hospital Tuesday, Oct. 22, 2019 in Charleston. Grace Beahm Alford/Staff 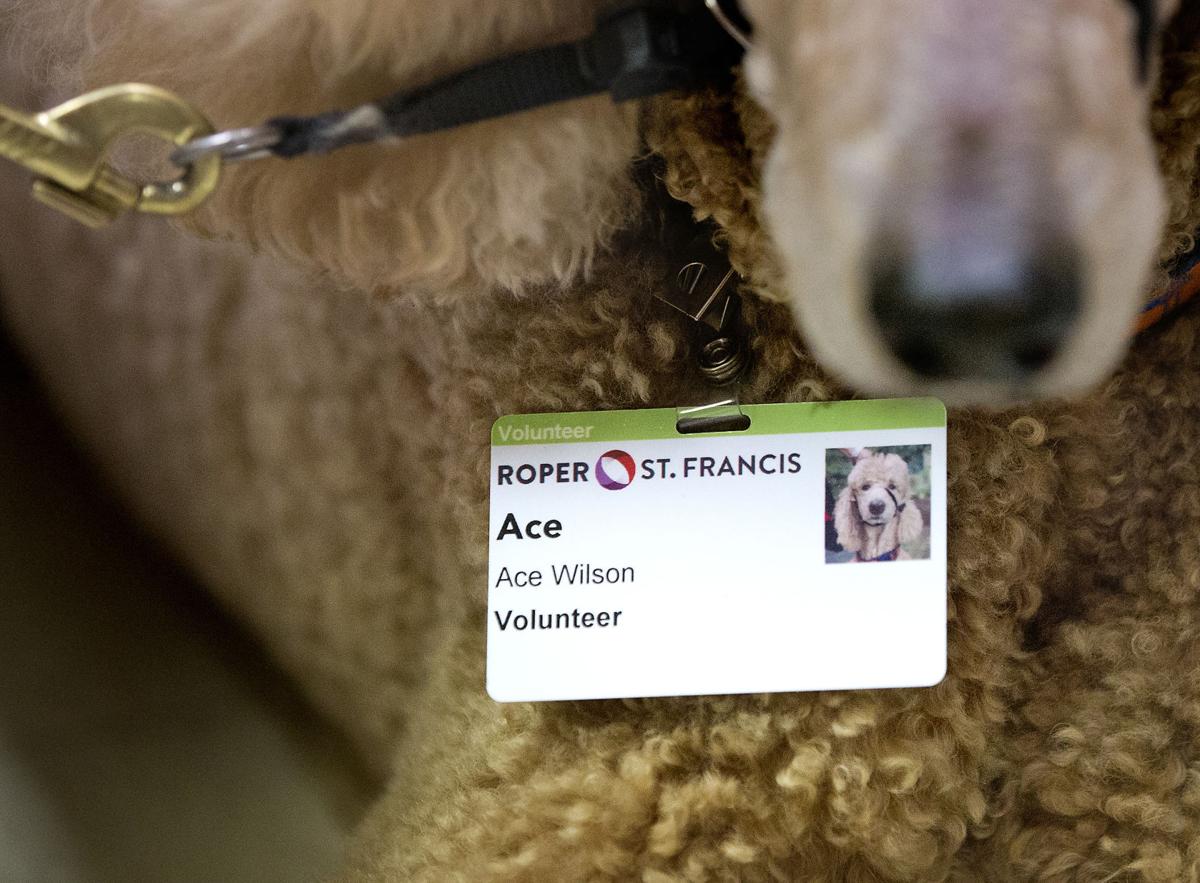 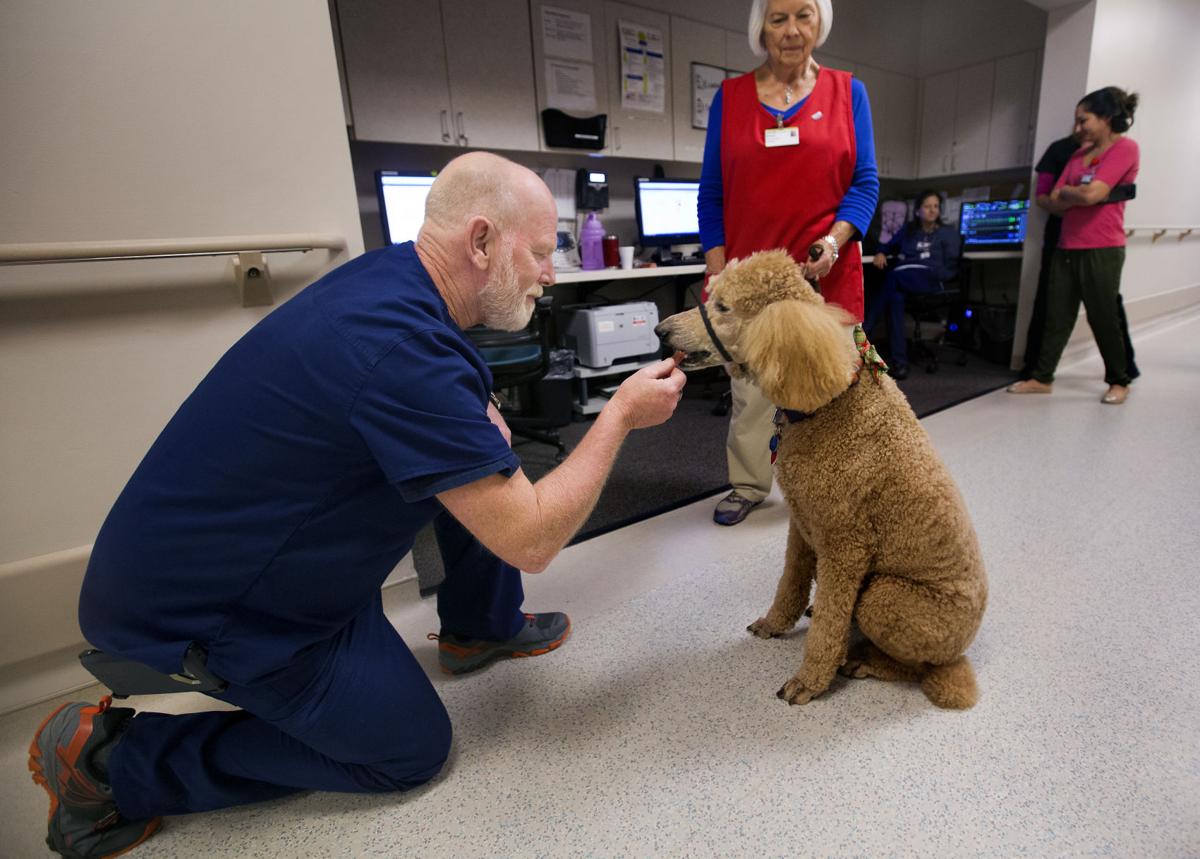 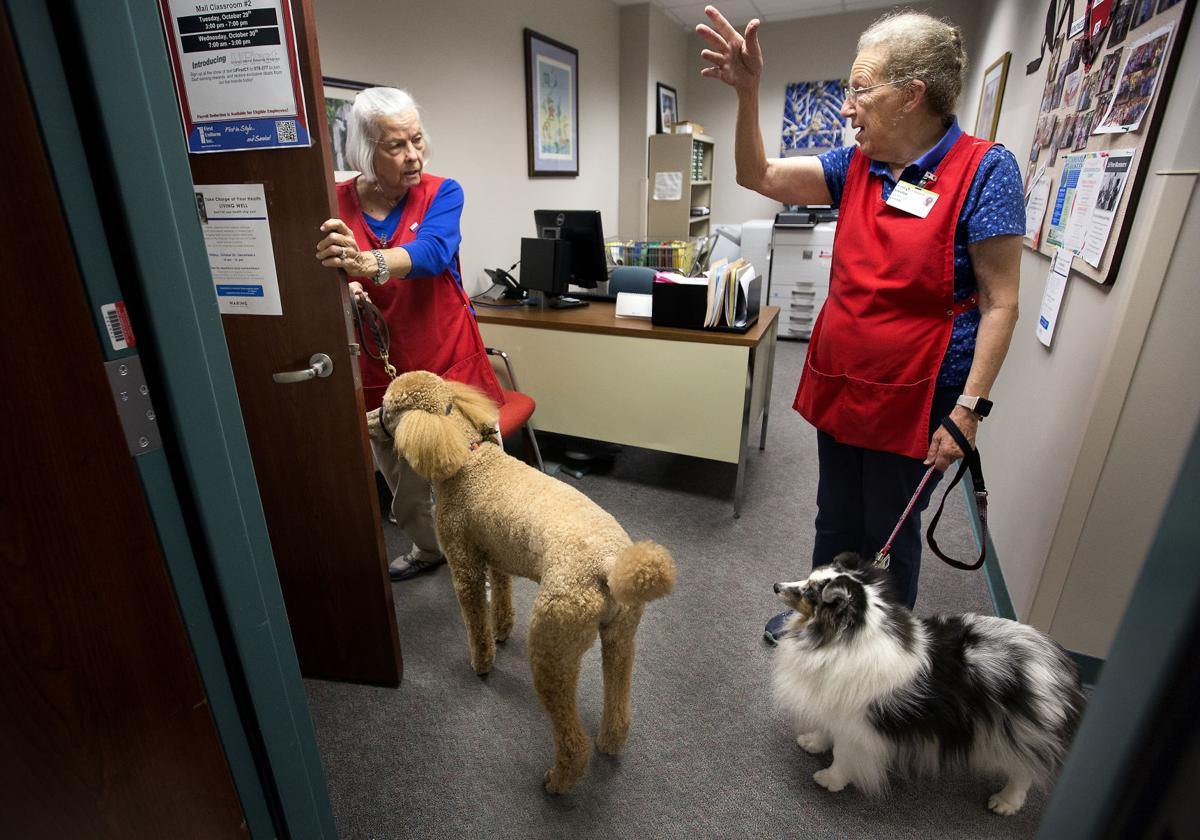 Volunteers Bobbye Wilson and her dog Ace, and Caroline Hunt and her dog Magnus are part of the pet therapy team that volunteers at Roper St. Francis Hospital Tuesday, Oct. 22, 2019 in Charleston. Grace Beahm Alford/Staff 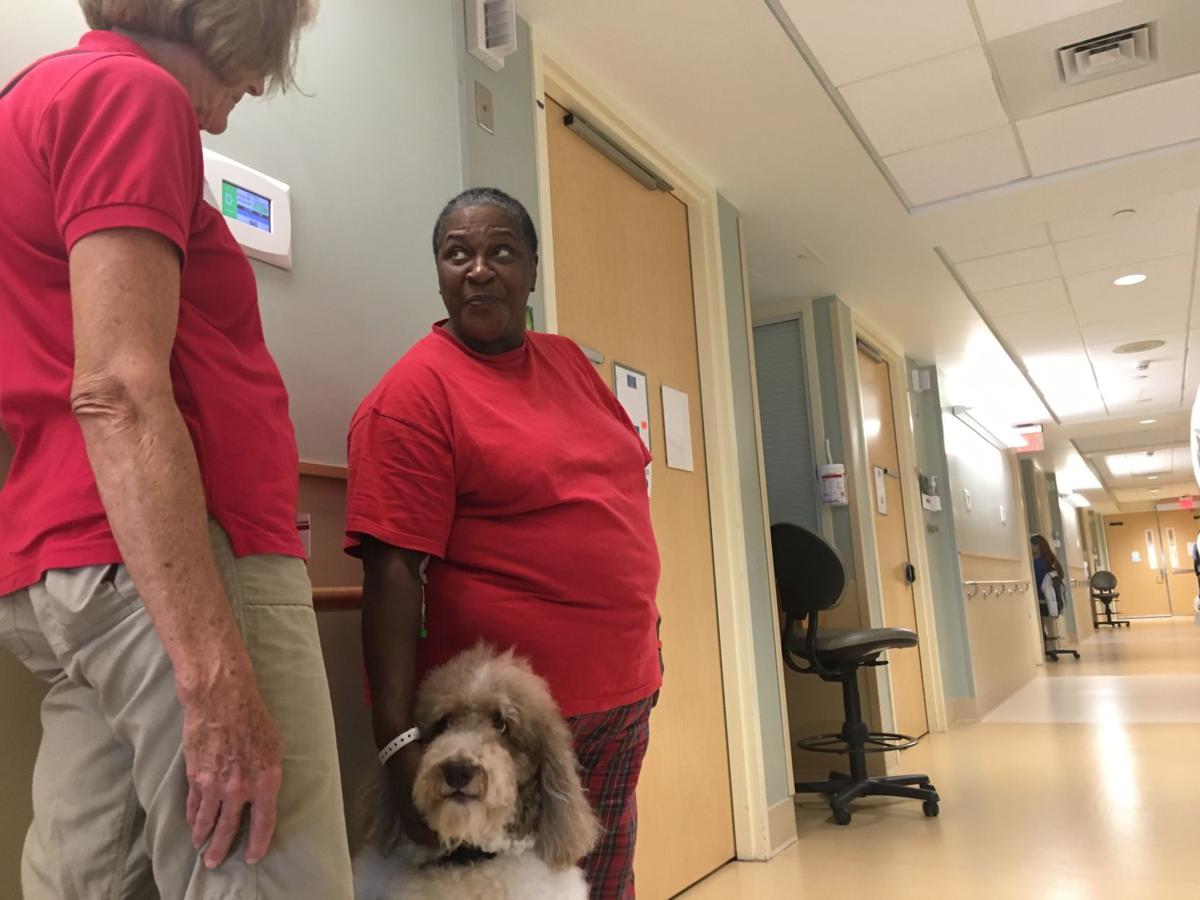 Christine Whitener (left) with her 6-year-old Aussiedoodle, Sage, and MUSC patient Angela Jackson. Jackson, a leukemia patient, speaks with Whitener about her love for dogs. 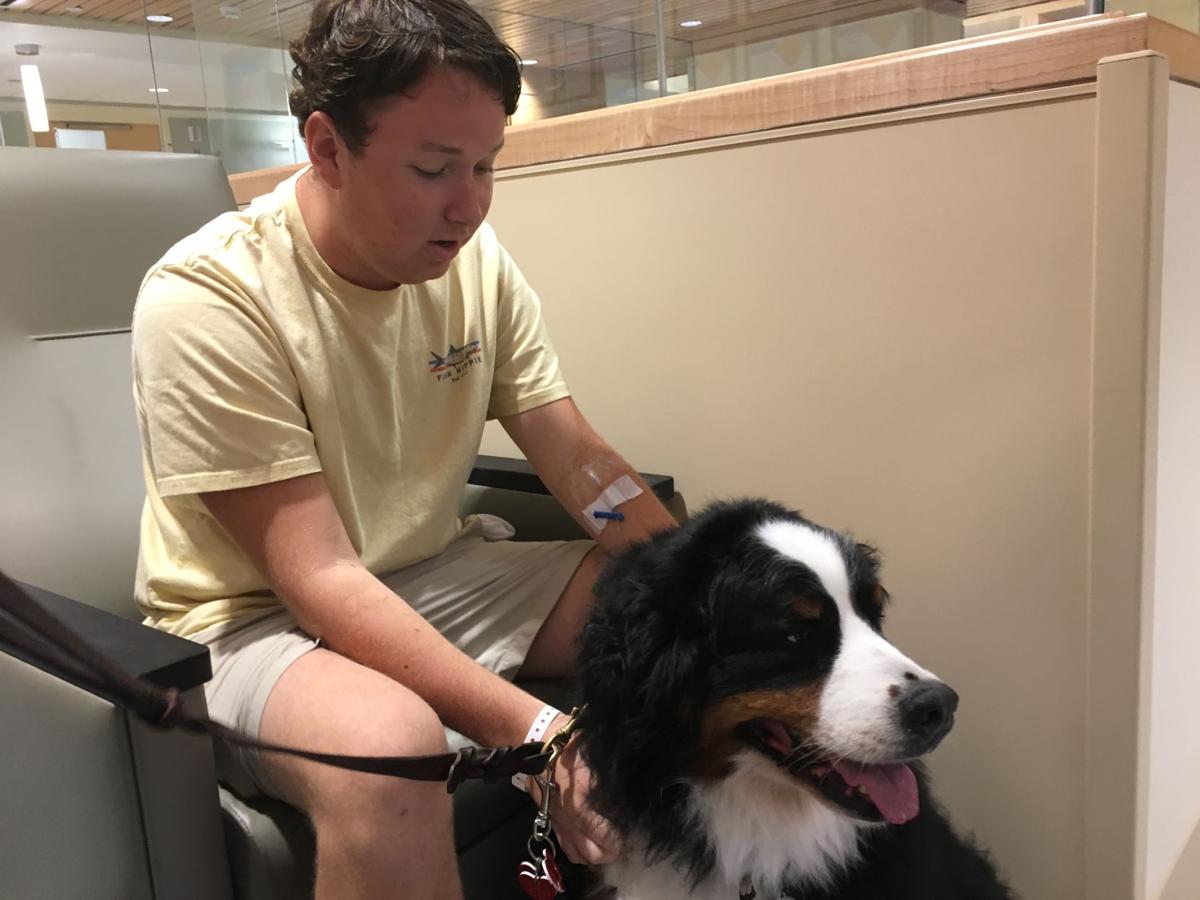 Wendy Bassett, who is being treated for ovarian cancer, receives a visit from Ace and owner Bobbye Wilson at Roper St. Francis Hospital Tuesday, Oct. 22, 2019 in Charleston. Grace Beahm Alford/Staff

Christine Whitener (left) with her 6-year-old Aussiedoodle, Sage, and MUSC patient Angela Jackson. Jackson, a leukemia patient, speaks with Whitener about her love for dogs.

Ace never speaks out or pushes towards anyone who doesn't want him to during the hours he roams the Bon Secours St. Francis Hospital in West Ashley.

When he walks near his other colleagues at St. Francis, he makes sure to back away to keep a safe regulated distance. And many of the patients and staff at the hospital brighten up when they see Ace and his handler coming.

"People will tell me, 'This is the highlight of my day,'" said Bobbye Wilson, the handler for the 8-year-old standard poodle who works as a therapy dog with Roper St. Francis.

"And he really seems to enjoy his work."

Therapy dogs typically travel to places like schools and hospitals to ease stress and anxiety. In 2014, the journal of Current Gerontology and Geriatrics Research reported that experts were seeing significant behavioral improvements with elderly patients with cognitive disorders through animal-assisted intervention.

A 2018 study in the Journal of Mental Health also found that the presence of therapy dogs were successful at alleviating stress for students at the University of Sheffield. More recently, experts have noted that there is a need for more controlled research to determine the extent of the potential benefit of these animals.

But there have also been discoveries in therapy dogs transferring infectious bacteria like Methicillin-resistant Staphylococcus aureus (MRSA) to pediatric cancer patients. This resulted in experts advising for a more extensive cleaning process for these dogs to prevent this.

In the meantime, the practice is growing. The Alliance of Therapy Dogs has around 17,000 members with certified dogs. And local hospitals haven't slowed in investing in their canine colleagues' work with patients. Part of the inspiration is organizers seeing the impact firsthand of these pet therapy interactions.

CBD is popular in SC, but adults and children with health issues should be extra careful

"It is truly an indescribable experience that happens every day," said Cathy Bennett, the pet therapy coordinator for the Medical University of South Carolina.

In a squad of volunteer dog handlers, Bennett managed to get a paid position organizing MUSC's pet therapy program.

Her work started with her two goldendoodles, Harley and Jackson, both becoming therapy dogs. The program she organizes with MUSC has 84 handlers, around 92 pet therapy dogs and six in training. They have therapy pets that visit locations like the intensive care unit and pediatric portions of the hospital.

They've worked in programs to help children ease their anxiety reading and also with patients going through recovery from a stoke. Bennett explained that they are hoping to expand the program even more.

Recently, they've gained access to hallways of the bone marrow oncology wing where patients can voluntarily come out of their rooms to interact with the canines.

"She never fails to put a smile on their face," said Robert Wright about 7-year-old Nora, his Bernese mountain dog who was one of the first pet therapy dogs to walk through the bone marrow transplant oncology hallways.

On meeting the dogs, leukemia patient Angela Jackson laughed and said, "I didn't know I would be so affectionate with it."

Wilson said after she had Ace for five years, she noticed he was a consistently calm dog. When she would sit in her chair at home she said he would always walk over to her and rest his head on her knee.

Watching those habits made her think Ace was capable of doing other things.

That was around three years ago. Since that time, he has been working with St. Francis. He visits the hospital every Tuesday and in that time his rotation usually consists of the outpatient surgery waiting room, the infusion center, the radiology center and sometimes the physical therapy gym.

The people that approach him are often dog lovers who own dogs themselves. At St. Francis, poodles like Ace seem to be the popular breed among patients.

Wilson said she can remember at one point there was a young girl at the hospital who was physically and mentally challenged with cancer. The girl had two standard poodles at home who she couldn't see as much as she wanted.

Wilson would bring Ace to her and the girl would pet him periodically. Wilson said she would like to think that Ace helped her.

"We used to stay two hours with her," Wilson said.

One of the first things she said an owner should consider when thinking about getting their dog certified in pet therapy is if they have the right temperament. And the Alliance of Therapy Dogs agrees.

"Not all dogs are meant to do therapy work," said Tracy Duck, a spokeswoman with the Alliance.

When the Alliance is certifying dogs like Ace, Duck explained dogs and handlers go through a nine-question handling test and observation. They go through a yearly fecal exam to check for any additional bugs or parasites, she explained.

At hospitals like St. Francis and MUSC, people who interact with the dogs are required to use hand sanitizer before and after they touch the dog. They also check to see if the dog is aggressive around other dogs. But most importantly, it's the temperament.

"And I think the owners know that," Wilson said.

Wendy Bassett comes to the infusion center every three weeks to get treatment for her ovarian cancer. Since she is an active person, she said it is hard for her to sit all day to get treatment.

When Ace comes in, Wilson initially misses Bassett because she is tucked away. But on their way out, Bassett gets to meet Ace who calmly lets her pet him, laugh and talk about her own two dogs who her husband went off to feed at home.

"It's wonderful," Bassett said about meeting Ace. "I enjoyed that."

Hospital therapy dog is an Ace for patients

Should kids be using weight loss apps? Charleston experts weigh in amid controversy

South Carolina ranks sixth in the U.S. for high school students with obesity.

The hospital was supposed to open sometime in October.