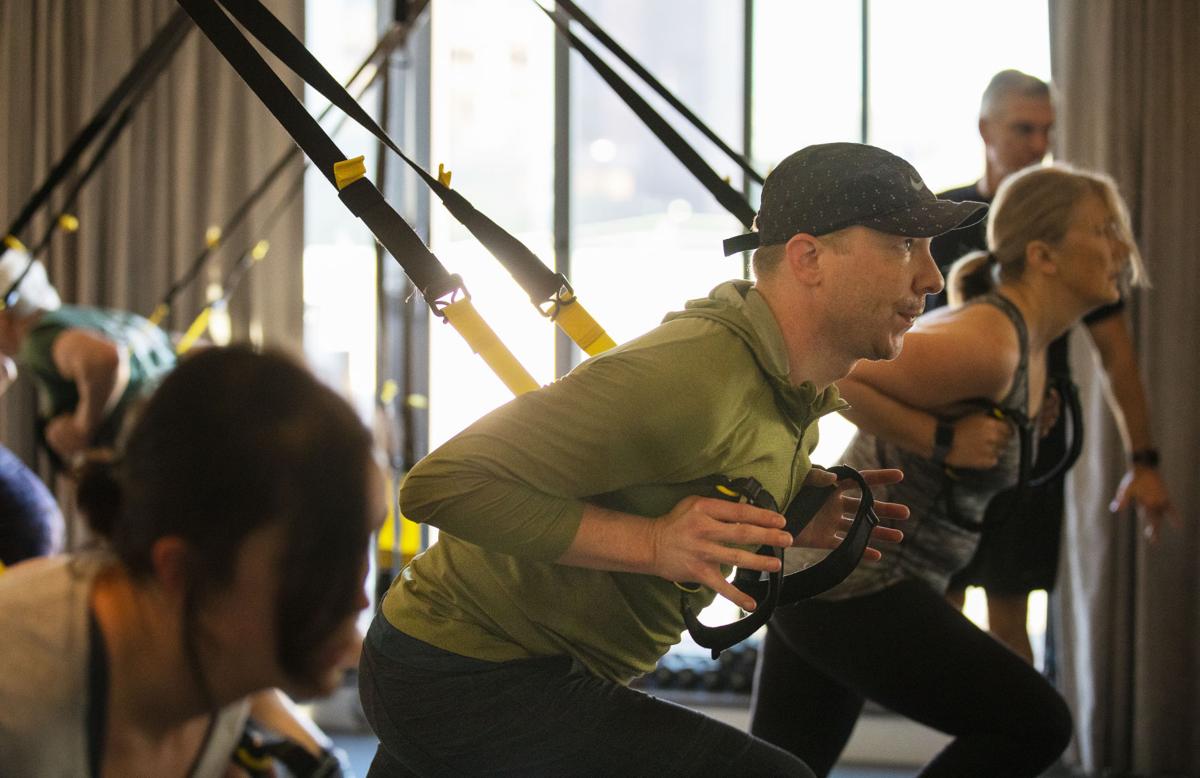 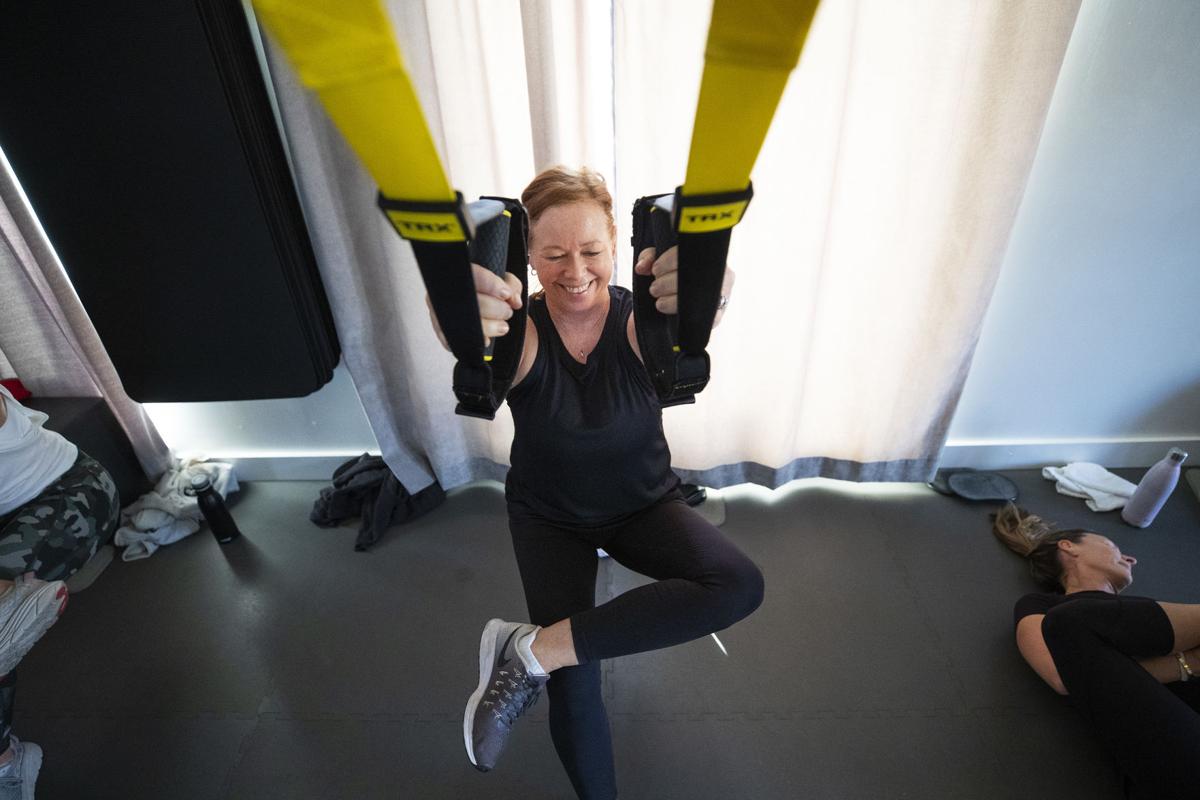 Wendy Williams of Charleston, who says she has been more encouraged to work out since the start of the New Year, stretches after completing a TRX Transformation class at Longevity Fitness in Charleston on Wednesday, January 8, 2020. "I exercise regularly, but I'm more motivated now," she said. Lauren Petracca/Staff 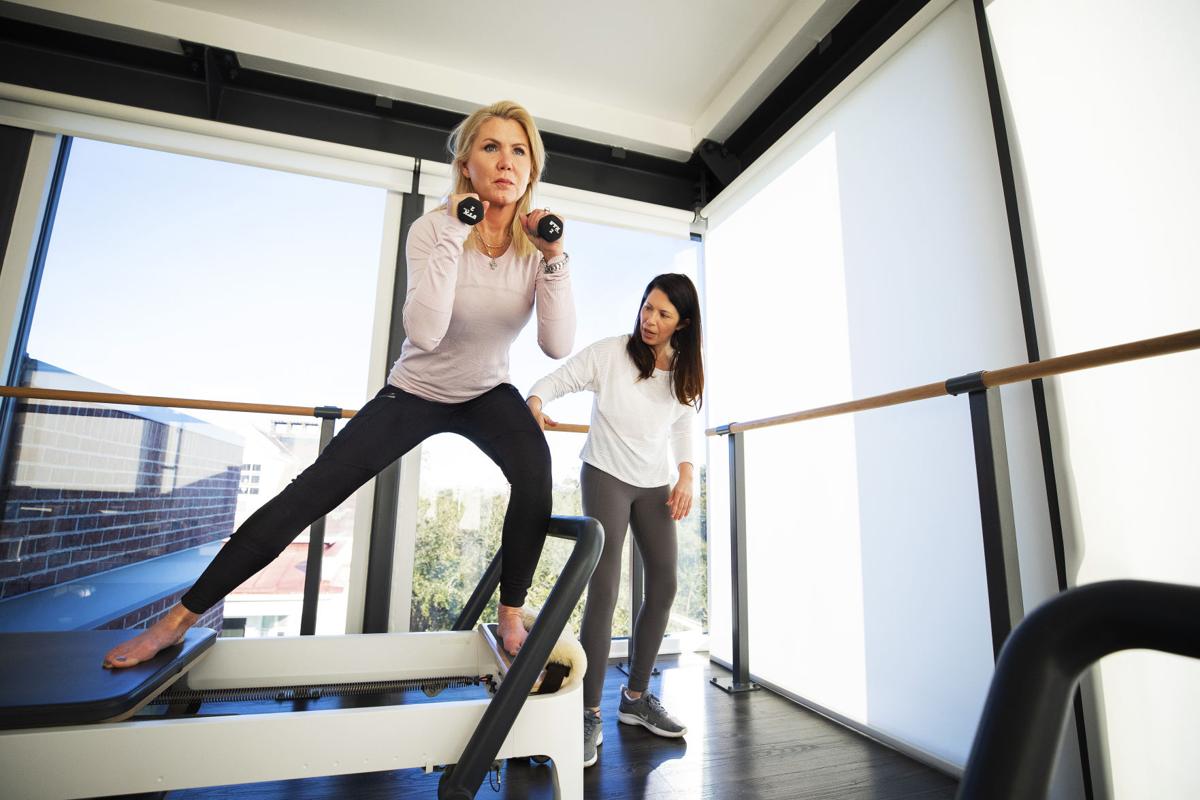 In January, many Charlestonians are finding themselves in the middle of attacking New Year's health resolutions, or at least mapping them out.

And while some are having luck meeting those goals, others may find themselves barely making it out of the month with their resolutions still intact.

In fact, some studies show that 30 percent of resolutions are abandoned within the first two weeks.

To help with this, local wellness experts offer tips on making the best out of a new year of health and wellness.

One of the first things Brooks said she works on with new clients is figuring out exactly what their goals are.

“What change do they really want to see? What’s motivating them?" she said.

It often takes asking the questions a couple of times before they really start to think about it, she said. The purpose is to get them to consider a plan to meet that goal.

If she has a client with the focus of just being healthier, then she helps them come up with short-term objectives that would fulfill that goal.

“What’s going to help them implement a healthy lifestyle?" she said.

With that, they also want to make sure that those New Year's resolutions are reasonable. She often has new clients come in with goals like losing a lot of weight or running a 10K race. To help, she said she and her staff will try to break down goals into things that are smaller and more attainable.

Instead of focusing on a goal to lose 50 pounds, it's more attainable to commit to attending a workout class three days a week. That way it's easier for them to measure small successes, she said. The weight loss also becomes an added benefit of working toward a healthier lifestyle.

Tonya Turner, the associate director of clinical services at the Medical University of South Carolina's Weight Management Center, agrees. She said the biggest thing is that people need to set themselves up for success. One way to do that is through making goals specific and measurable.

Many people have the tendency to come up with a broad goal in January that can't be easily measured or observed. They can't necessarily see if they are making any improvements or achievements, she said.

"Really make them realistic, something that is actually achievable," she said.

In crafting those resolutions, experts say that it is also important for a person not to put too much on their plate.

For example, Turner said that if a person does not usually exercise, then “going to the gym five days a week is probably not going to happen."

Additionally, having a long list of resolutions increases the chances that some of them won't be fulfilled.

"I think people try to do too much," she said. "They set themselves up to change habits overnight.”

And experts note that people will often lose motivation when they don't accomplish some of those objectives. Dana Bufalino, a Charleston-based health coach, said a health resolution can be as simple and singular as making each plate of food 50 percent vegetables.

But if people are going to shoot for lengthy goals, then prepping in advance is key. On Sunday, she said people should take time to plan out their week so that the goals are accounted for.

“Otherwise you’re gonna get to Monday and say ‘Oh, I forgot to reach my goal today,'" she said.

One of the best ways to help with this, Brooks said, is for people to do activities that they genuinely enjoy. Getting up in the morning and running a mile or lifting weights may not be appealing to everyone.

For some people, something like a dance class or a Pilates class may be more appropriate, she said.

To keep motivated, experts say that people have to pick up the habit of rewarding themselves for staying on the resolution path. Bufalino, the health coach, said that people often spend too much time focusing on the negative and not so much on the positive.

It is important to reflect on successes.

“It focuses on the progress that you made," she said.

And Brooks agrees. She said it's a wonderful time to reflect on accomplishments.

“When people really start to look at where they come from, they’re much more likely to stick with it," Brooks said.

For some, rewarding themselves can be as straightforward as just taking time to reflect on the success or buying a pair of leggings they've been eyeing after completing a successful trip to the gym, Turner said.

“Acknowledge some of the things that you do nice for yourself," she said.

A lot of people may find themselves falling off the resolution wagon after one slip up. Experts say that slip ups are to be expected. The first three months of a fitness journey are often the toughest because a person's body is changing, Brooks said.

Some days are going to be harder than others. The important thing is not to completely give up, she said.

“Consistency is the key part," she said.

While the beginning of the year marks a time for a health reset, experts also point out that it doesn't have to be the only reset. If a person messes up on their health goals, they can still keep going.