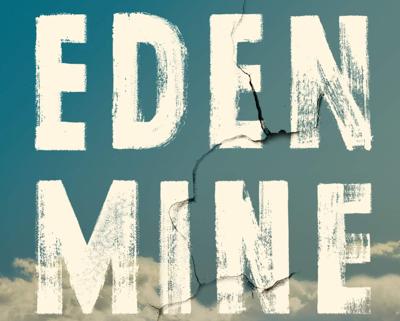 “Eden Mine” by S.M. Hulse is a book that wastes no time. Because Jo, short for Josephine, is running out of it. Her brother, Samuel, has just blown up the Elk Fork, Mont., courthouse and put a minister’s daughter in a coma 37 days before the government seizes their family land. He’s on the run, leaving Jo to pack up their house and deal with the sheriff, FBI and the little girl’s father.

Jo’s no-nonsense, present-tense narration puts the reader in the moment with her, and she doesn’t tell us anything until we absolutely need to know. For example, we don’t learn that Jo is in a wheelchair until her character is established, outside of her disability. The revelation takes the reader by surprise the same way it takes the FBI agent investigating Samuel by surprise.

Hulse’s writing is precise and exacting, which makes the details she does include stand out even more. She trusts the reader to pick up on context clues, and she deftly inserts metaphors in a way that makes them clear without being heavy-handed. Some foreshadowing is evident, but that isn’t a bad thing. Hulse doesn’t really mind if the reader guesses the broad strokes of what will happen in the book. This is a story driven by character, not plot. The tension doesn’t come from whether Samuel is guilty but, rather, from what Jo will do about her brother.

Joining Jo’s narration are excerpts from a letter Samuel is writing to her that tries to explain his actions. He is a constant presence in the background of the story and, through Jo, the reader gets a clear view of a disillusioned and angry man. Samuel has tried on and discarded so many fringe beliefs that they don’t mean anything. It’s all just talk, until he blows up the courthouse.

Does Hulse want us to empathize with a bomber? Not at all. Samuel is always portrayed as wrong for having these fringe beliefs. We are more meant to empathize with his sister placed in the impossible position of seeing his actions for what they are, yet still loving him anyway.

Rounding out the trio of voices are short addresses to God from Asa Truth, the minister whose daughter was critically injured in the bombing. Like Samuel’s letter, these short, intensely personal meditations on faith after trauma are the only insight into his character that doesn’t come from Jo. He is understandably going through a spiritual crisis, and this allows Hulse to explore what it means — or what it takes — to have faith.

Review: Timothy Egan muses on religion in his fascinating chronicle 'A Pilgrimage to Eternity'

Thankfully, Hulse avoids any hint of romance between Jo and Asa and chooses instead to examine the relationship between the father of the victim and the sister of the perpetrator. Samuel’s violence connects them, and they forge a cautious friendship, but Asa is trying to get Jo to assume her brother’s guilt, or at least apologize since he can’t get her brother to do so. But Jo never lets him or anyone else put her brother’s blame on her shoulders.

Hulse also is examining how the aftermath of trauma is both immediate and long-term. “I’ve been thinking a lot about how we get where we are, how we become who we are, about how things lead to other things, and how they change a life,” Samuel says to Jo near the climax of the book.

Years before Samuel’s bombing, Jo’s family enduring a double tragedy that transformed her and her brother. An angry ex-boyfriend wrought havoc on the family, and before that, their father died in a mine collapse in the mountains that hem in Elk Fork and their land. Even the seizure of their house can be seen as an act of violence.

Trauma leads to trauma, and lives change. Both Samuel and Asa are trying to find a reason for their suffering, and only Jo understands there’s never a single, or a satisfactory, answer. Especially concerning the bombing: “Whatever reasons Samuel had ... they’re not good enough,” she says.

Hulse weaves these three points of view into a tapestry of violence’s aftermath and the way it connects and disconnects people. Jo’s Eden is dying and imperfect and steeped in trauma but, like the novel, its stark beauty contrasts the human tragedies that play out in the shadow of the surrounding mountains.

Which is why it’s understandable that Jo didn’t leave until she had no other choice. To her, it’s the paradise of a place you know back and front, of the place that connects you to your history, no matter how bloody.

Reviewer Debbie Clark is an editor at The Post and Courier.