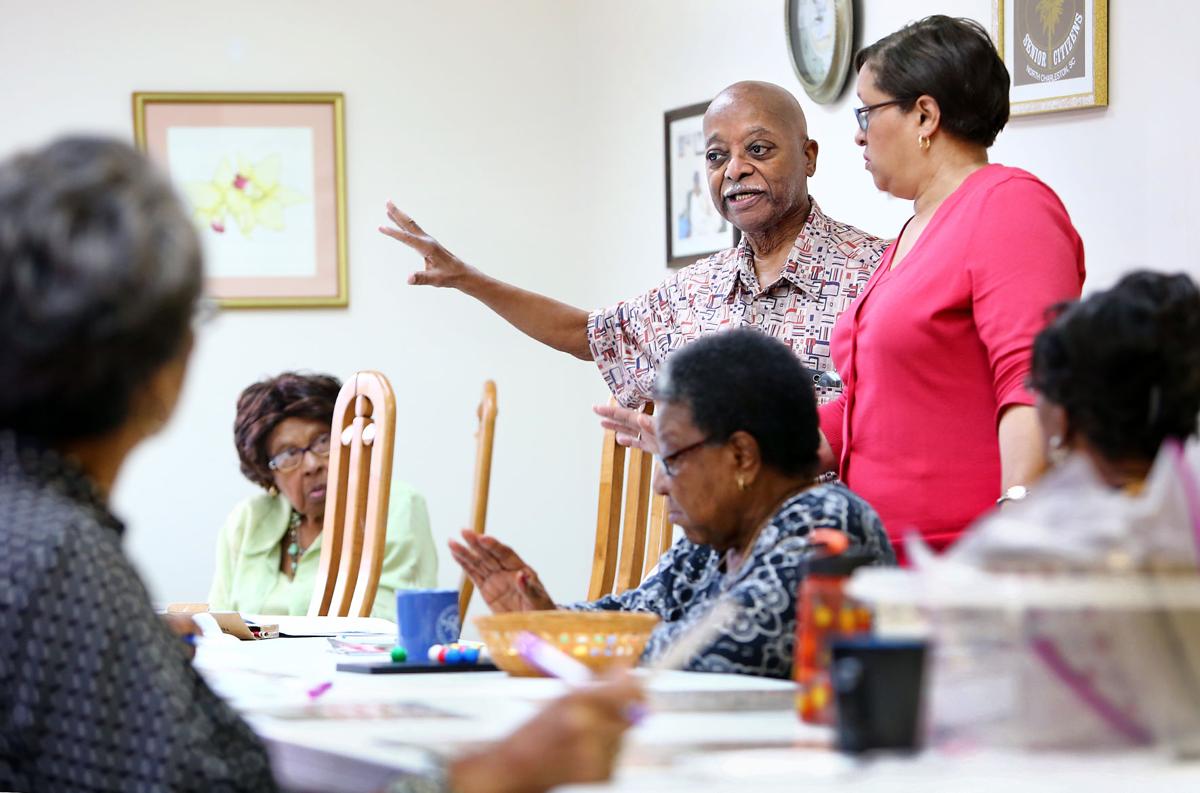 Even though Vernon Williams first began to notice the signs of Alzheimer's disease two years ago, he continues as business manager for the Samuel L. Hart Senior Center in North Charleston — shown here on Tuesday, Feb. 20, 2018. He has opted into a Roper St. Francis clinical trial for the disease, which affects African-Americans disproportionately. Wade Spees/Staff 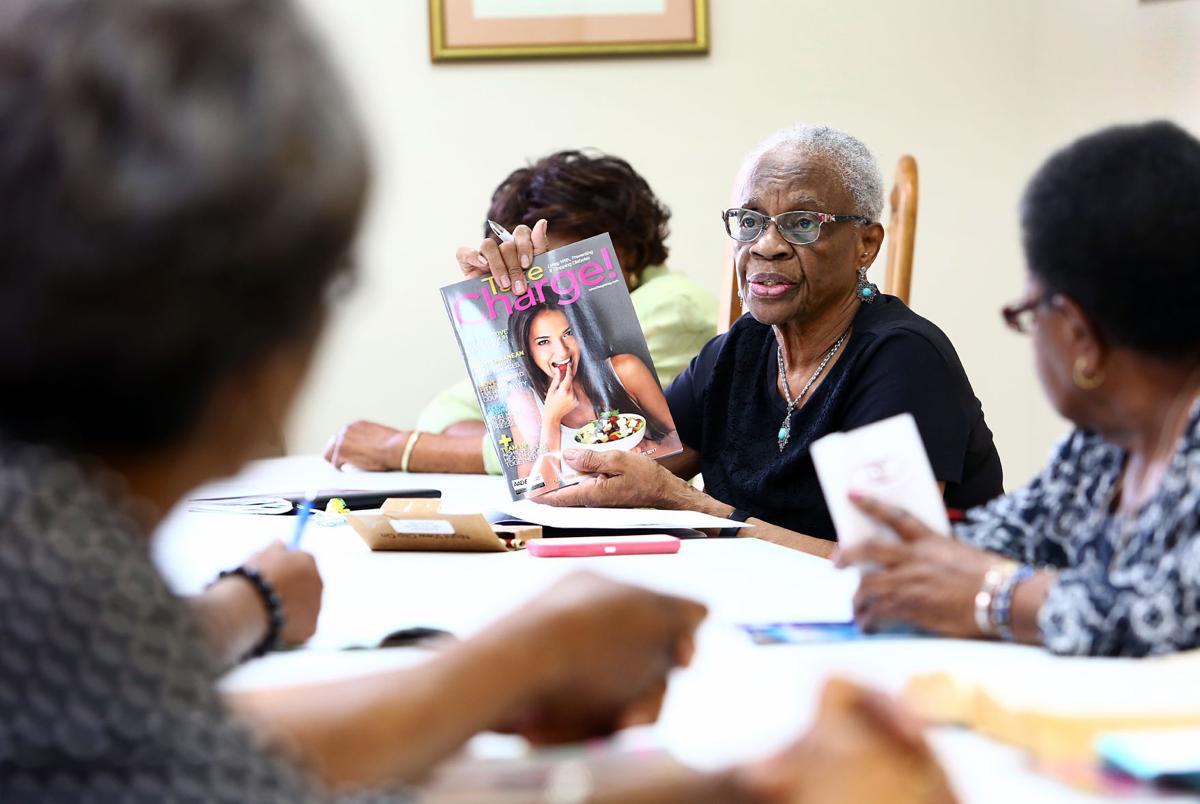 Hortense Williams and her husband Vernon lead regular meetings at the Samuel L. Hart Senior Center in North Charleston — here showing the group a magazine on diabetes on Tuesday, Feb. 20, 2018. Both diabetes and Alzheimer's are more likely to affect blacks than whites. Mr. Williams first began to lose his memory two years ago. Wade Spees/Staff

Vernon Williams had begun to forget little things. He would begin driving, only to realize he couldn’t remember how to get to where he was going. Trips to the refrigerator ended in frustration. After church, people he had known for years greeted him. But he couldn’t recall their names.

He wasn’t even thinking about Alzheimer’s disease then. Now, it’s his reality. Williams, 84, began to notice the early signs of the disease about two years ago.

Williams stays busy. Doing so is understood to help slow the progression of the disease, while isolation will speed its onset.

But no matter what he does, it won’t change the fact that because he is black, he always had twice the chance of contracting the disease as his white counterpart, according to the Alzheimer's Association. Investigators don’t exactly know why.

Dr. Jacobo Mintzer, a researcher and doctor at Roper St. Francis, said more representative research is needed to answer those questions. But that research is difficult to accomplish, he said, when participation among African-Americans in clinical trials of all kinds remains low.

African-Americans comprise 20 percent of people in the state who are 65 or older but have 28 percent of Alzheimer's or related dementia cases, according to the state's Alzheimer's Disease Registry. There were nearly 92,000 cases in South Carolina altogether in 2013, according to the report. Mintzer said doctors have been able to identify a “lesion” in the brain that signifies Alzheimer’s presence. No method has been developed to remove that lesion or decrease the plaque buildup that indicates the disease’s progression.

Mintzer said in the research community, there is optimism a breakthrough could be made soon. It is needed, given the rate at which the population is aging. But advocates say funding for research is not on pace with that growth.

And research into why the disease affects African-Americans more often is nearly lacking altogether. Experts think it may be because of higher rates of heart disease and diabetes in that population. “What is good for your heart is good for your brain,” any doctor might say.

The Food and Drug Administration recorded more than 31,000 participants in drug trials in 2016. Just 7 percent of those who took part were African-American, even thought they make up 13 percent of the country’s population.

Williams would be an exception to this trend. He opted into one of Roper St. Francis’ Alzheimer’s trials.

When he worked at hospitals in New York as a nurse's aide and an operating room technician, Williams remembers seeing research trials carried out that seemed to exploit the black homeless population. But working in health care, he understood researchers’ needs, too.

“Some of it, they didn’t do good for them,” he said. “At least I have control over what’s going on. I figure these people are trying to help me.”

Stephanie Monroe, director of the Washington D.C.-based AfricanAmericansAgainstAlzheimer's Network, said universities and hospitals are not doing enough to recruit African-Americans into trials.

She said researchers may still not believe that recruitment is part of their role. Outreach is still lacking in churches, community health centers and other places where the black community might congregate, she said. At doctors' offices, African-Americans don’t see themselves represented.

Mintzer said African-Americans’ fear to participate in research is justified. Doing so requires trust between researcher and subject.

“I don’t think that we, as a research community, have developed a deep enough relationship of trust with the African-American community,” he said.

Mintzer said many researchers assume the disease affects patients of all races the same way. But that assumption isn't necessarily true, he said. There is just not proof.

Tracking disease incidence, especially by race, is imperfect. Information from the S.C. Department of Health and Environmental Control shows 18 percent of deaths from Alzheimer’s were African-Americans. They represent about 28 percent of the state’s population, the Census Bureau shows. But death certificate information is imperfect.

Williams and his wife, Hortense, remain mostly unbothered by the diagnosis. They take it one day at a time. Hortense, a licensed practical nurse, said through her career she was used to leaving work at the hospital.

“Now, I come home and have my own patient to take care of,” she said. “I try to keep a really good eye on him.”

Married for nearly 59 years, the Williams are accustomed to being by each other’s side. They pick at each other — Vernon commented his wife thinks he has more Alzheimer’s than he actually does.

The fact that Hortense keeps Vernon “straight,” as he puts it, could be part of the reason not even their dentist would guess he has the diagnosis. He fights its progression with calm resilience and weekly Spanish classes.

Still, because there is no cure or even reliable treatment for Alzheimer’s, Vernon’s disease will continue to chip at his ability to remember things, dress himself, drive and to speak his mind. No new treatment has been developed for Alzheimer’s in almost two decades, Monroe said.

"It makes it very difficult to find the target when looking for better treatments or a cure," she said. "We are ill-prepared as a country."