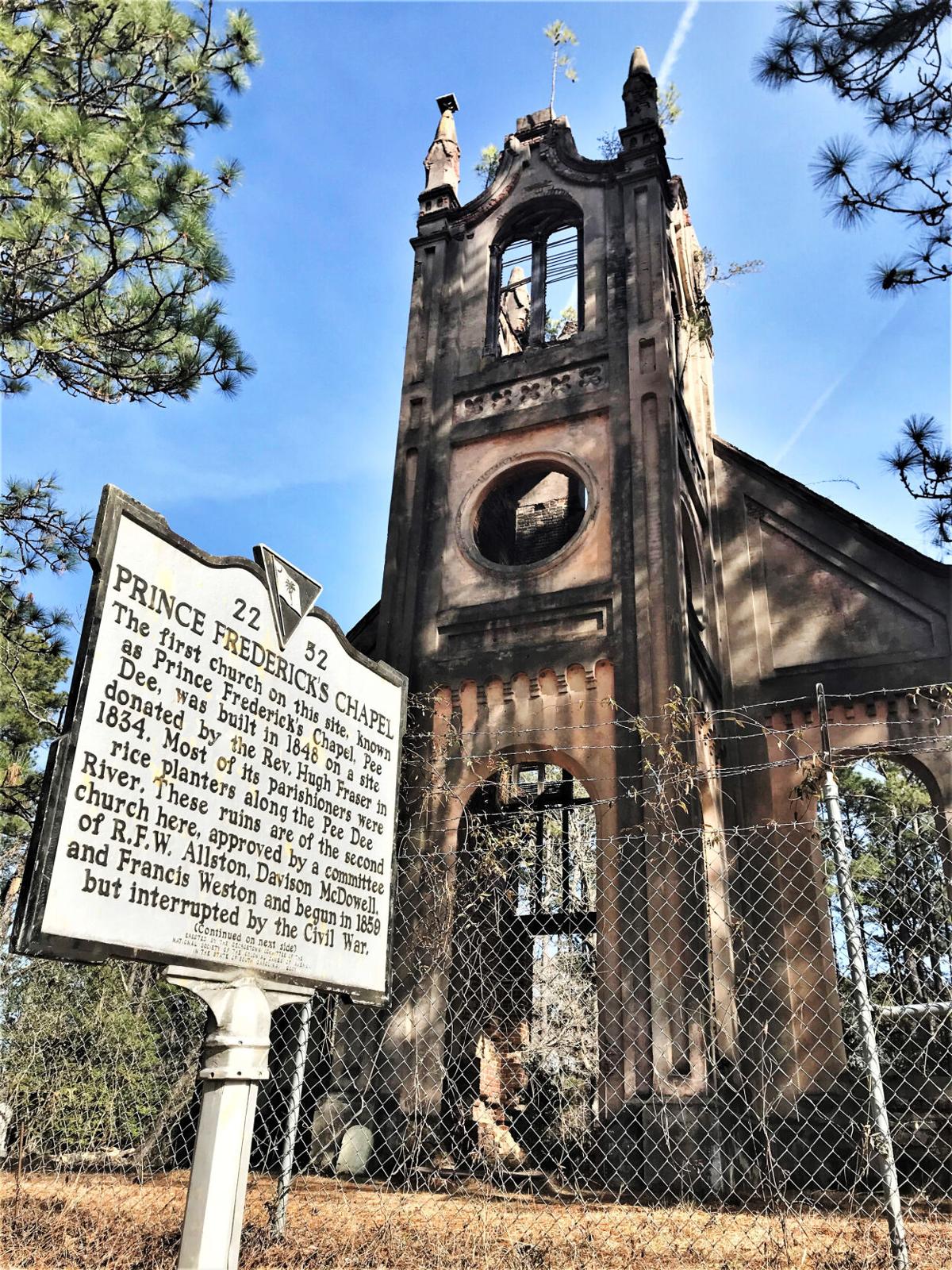 The ruins of Prince Frederick Church stand on Plantersville Road in Georgetown County. The first church on the site was built in 1836, not 1848 as the historical marker reads, according to historian Mary Boyd. The first church on the site was called a chapel, which was later moved, and the name of the church does not have an apostrophe or "s" as the marker states. Warren L. Wise/Staff 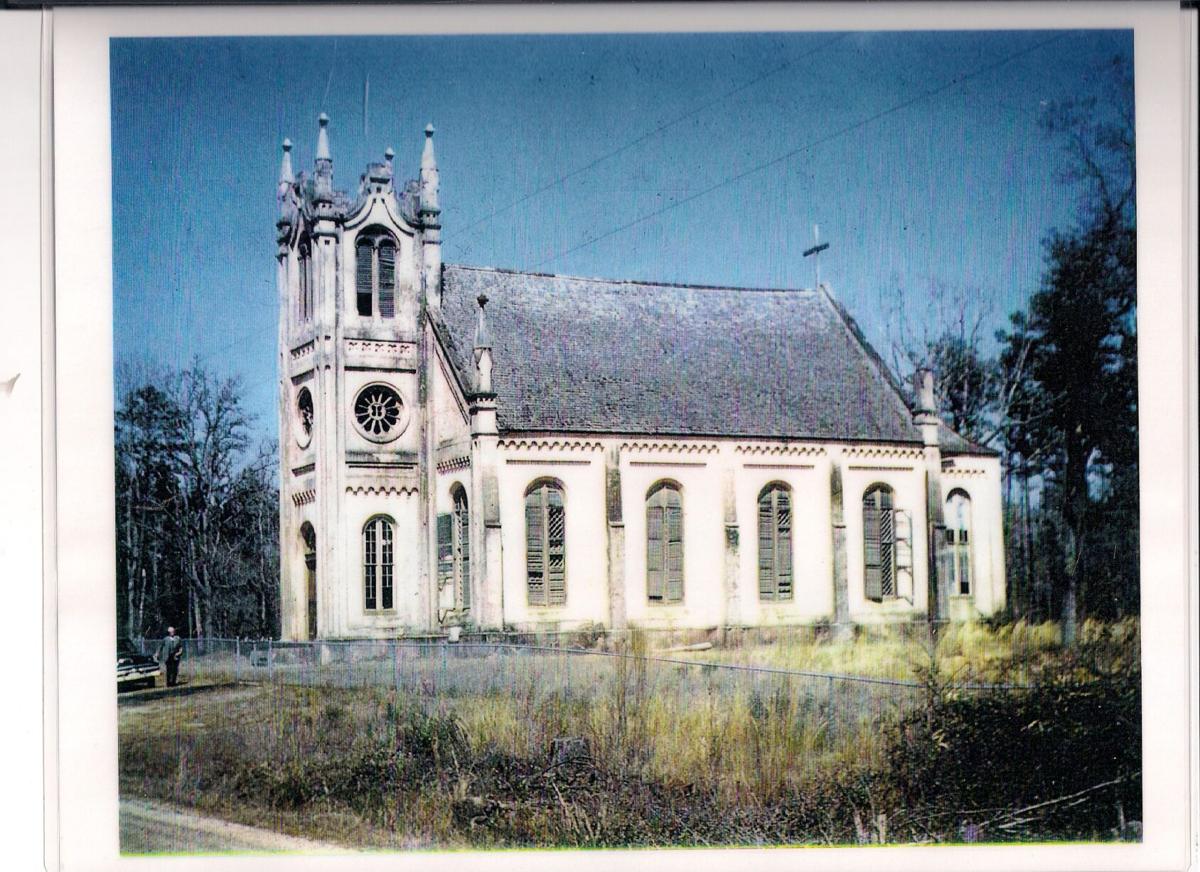 Construction started on Prince Frederick Church in 1859, just before the onset of the Civil War. It was not completed until 1876, but as parishioners moved away from Plantersville in Georgetown County after the war, the church fell into disrepair and finally ruin. Only a front wall and the tower remain now after the rest of the once-elegant structure was torn down in 1966. Georgetown County Museum/Provided 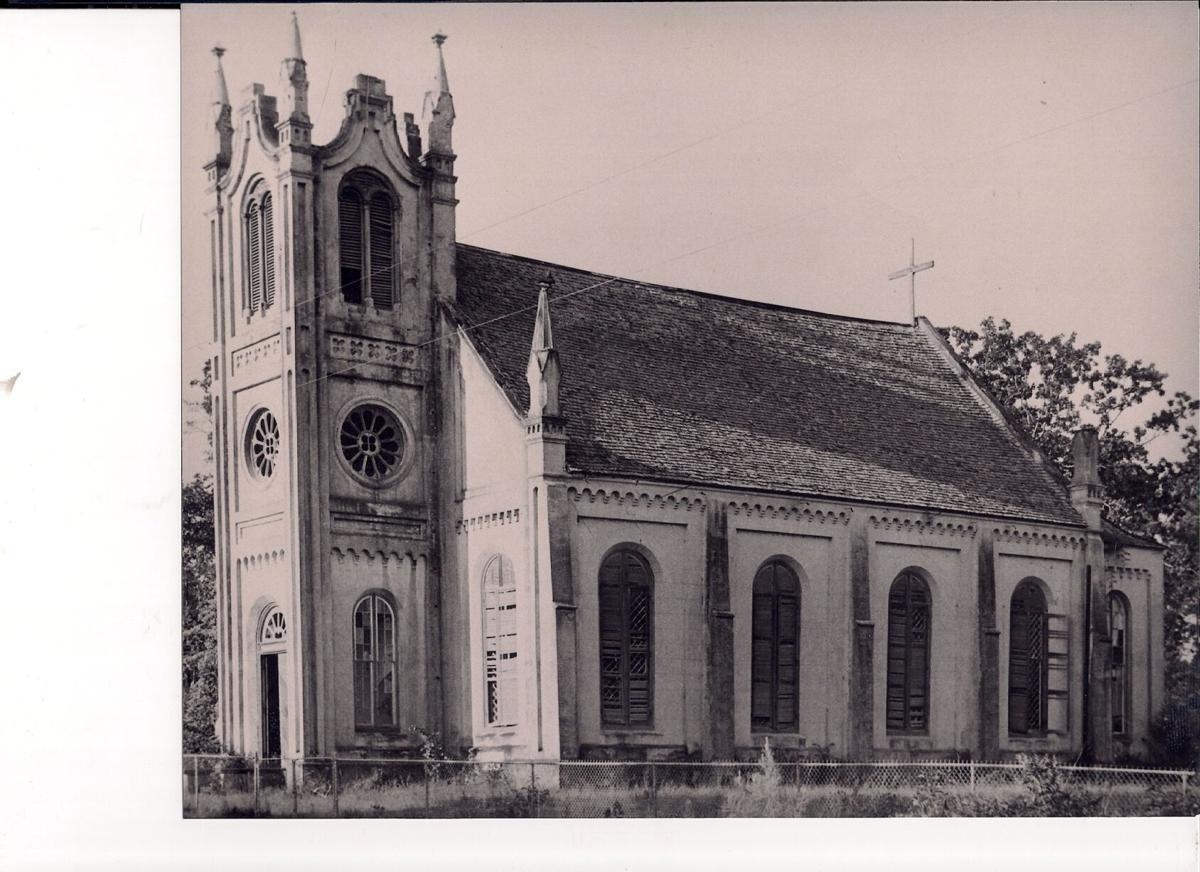 Prince Frederick Church was begun in 1859, just before the onset of the Civil War. It was not completed until 1876, but as parishioners moved away from Plantersville in Georgetown County after the war, upkeep proved difficult and the once-grand structure fell into ruin. In 1966, all but the front wall and tower portion were demolished. Georgetown County Museum/Provided 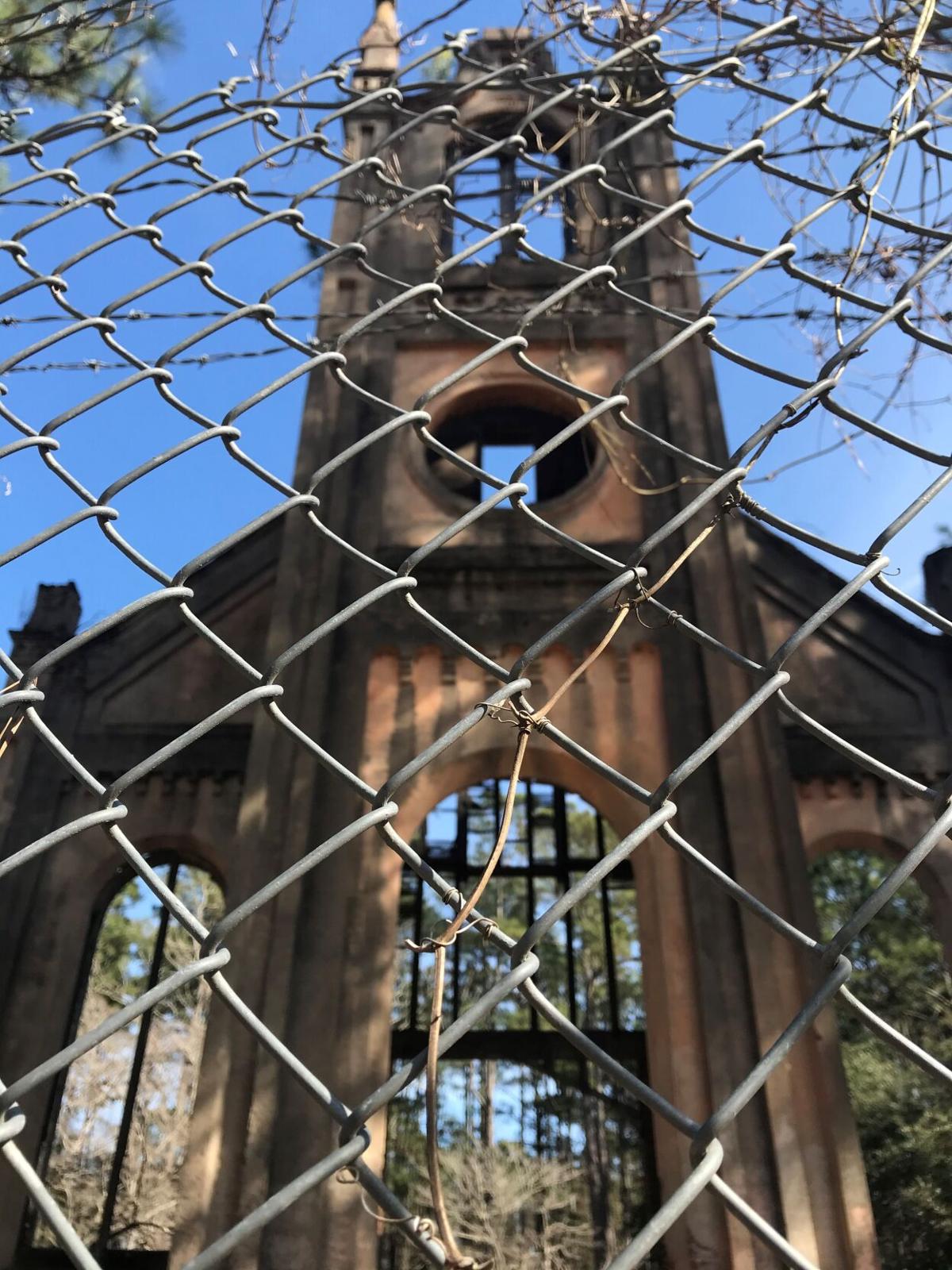 The ruins of Prince Frederick Church are guarded by a chain-link fence to keep out trespassers on Plantersville Road in Georgetown County. Warren L. Wise/Staff 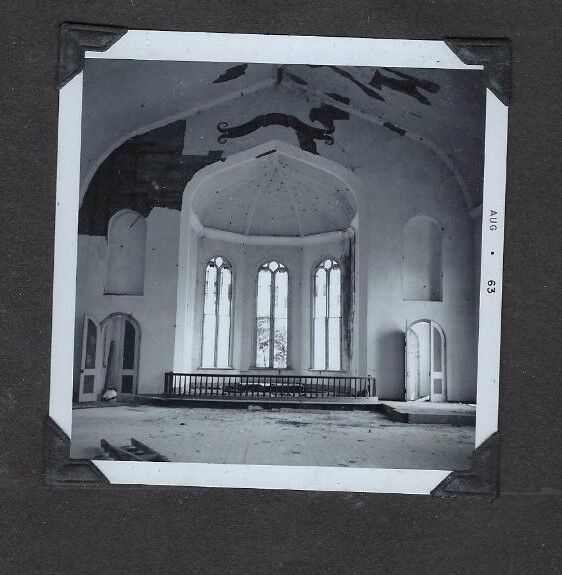 This undated photo shows the rear interior of Prince Frederick Church in Georgetown County before the back portion of the church was demolished in 1966 after it fell into disrepair. Georgetown County Museum/Provided 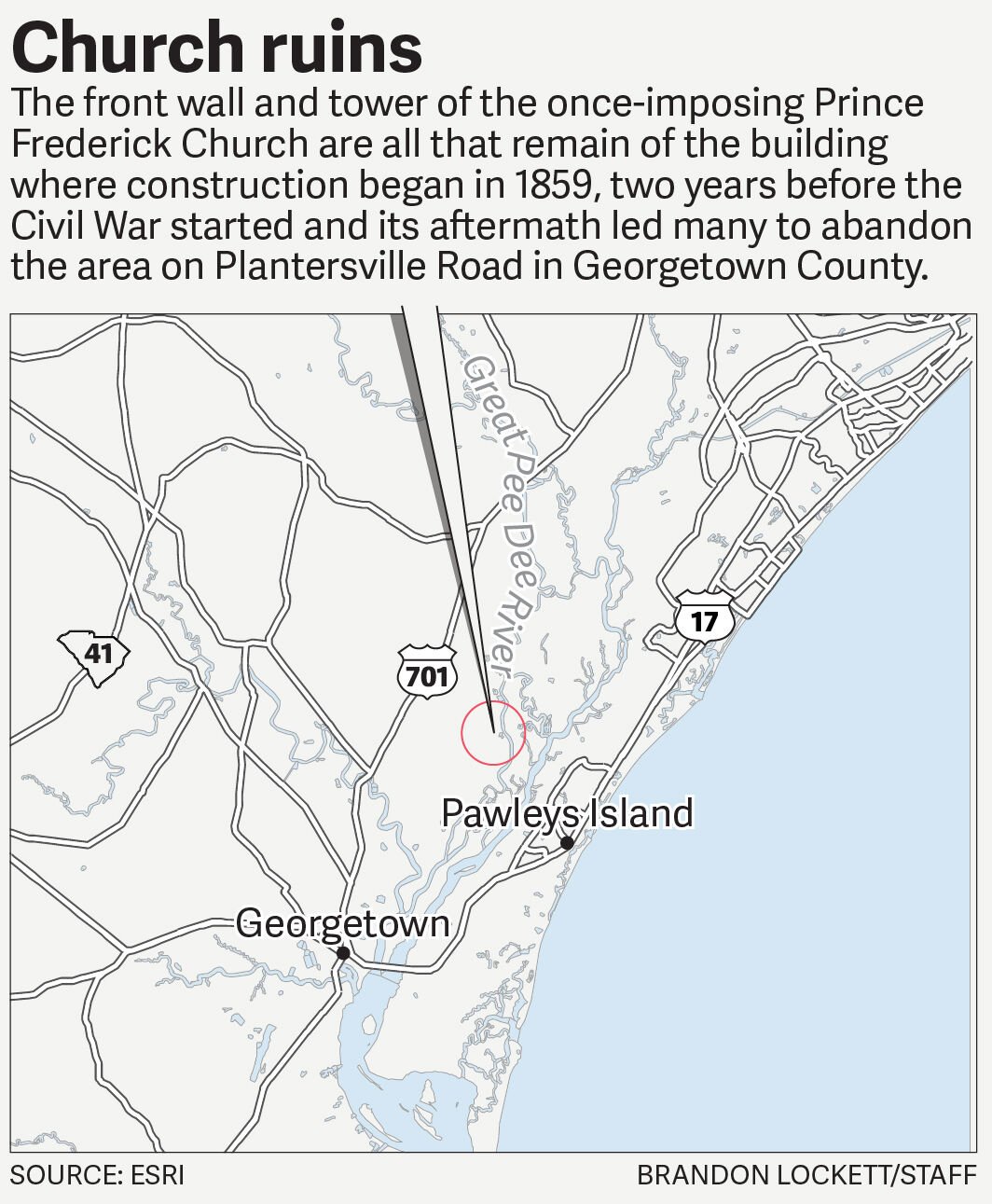 GEORGETOWN — Union troops didn't destroy a once-magnificent house of worship in Georgetown County, but the Civil War played a pivotal role in its ultimate demise.

To establish the church's name, it all started in 1721, long before colonists revolted against their English king and still named buildings and places after royalty.

The parish of Prince George, the future King George II, was established, and it extended from the North Santee River to south of the Cape Fear River near what is now Wilmington, N.C., and from the Atlantic Ocean to as far west as the king's inhabitants could be found.

In 1726, construction of a small wooden chapel began at Winea Plantation on a bluff overlooking the Black River off what is now Browns Ferry Road. At the time it was the center of population near a Native American trading post.

By 1729, the new town of Georgetown was established. With it becoming an official port of entry in 1732 and imports and exports able to bypass the normal port of Charleston to the south, the center of population moved to the town on the Sampit River next to Winyah Bay.

Two years later, the Church of England decided to build a parish church in Georgetown, and, at the same time, split Prince George Parish. The chapel at Winea fell under the new parish, named for Prince Frederick, the Prince of Wales, and heir to the throne as George II's son.

The tiny church held its own until the Revolutionary War, when the British stopped paying a bounty for the indigo produced in the colonies and turned to India for their cravings of blue dye yielded by the crop.

Gradually after the war, coastal river plantations in the area replaced indigo with rice as their main cash crop and shifted production to more ideal conditions on the lower Great Pee Dee River.

With planters moving to where rice brought them riches, by 1810 the small wooden church — said to be quite ornate and also called The Black River Church in Prince Frederick Parish — was abandoned and fell into disrepair. It no longer exists.

Unfortunately, Prince Frederick didn't outlive his father, George II, to become king, but the Episcopalian plantation owners and church vestry living between the Black and Great Pee Dee rivers decided to keep his name alive, even after the Revolutionary War, with a new church in the parish that bore his name.

As rice plantations flourished along coastal rivers in the early 1800s, Episcopalians were holding services near Plantersville in the spring of 1827 in a "universal" chapel when the vestry met to consider the best means of erecting a new church, one named for the Prince of Wales who died before ascending the throne.

Though money was raised and a building committee appointed, the vestry could not agree on a suitable location for the new house of worship, and nothing happened for several years.

In 1834, the Rev. Hugh Fraser, a former parish rector, donated a bit of land and a building committee was appointed with the power to contract for a church "of convenient dimensions."

Completed in 1836, the wooden chapel soon became too small for the growing congregation of plantation owners and their families along the Great Pee Dee River, and, in 1857, they decided they needed a larger place to worship.

Seeking something more ornate to symbolize their prosperity, the Episcopalian planters wanted a brick church and were willing to spend $12,650, the equivalent of more than $380,000 in 2021.

Construction started in 1859, but the work ran into major headwinds that delayed the church's completion and would ultimately lead to its destruction.

Soon after work started, one of the contractors, either Philip or Edward Gunn, (it's unclear which one) was killed after falling from the roof and gave the structure its nickname of "the old Gunn Church."

The country was also on a war-footing over slavery, and in 1861 the Civil War erupted. Furnishings and finishings for the church ordered from abroad never made it because of the Union's naval blockade of Southern ports during the war.

With resources funneled to the war effort and the Southern economy is shambles after the fighting stopped, the church sat unfinished until 1876, when John Earle Allston of New York, a relative of the former plantation owners in the area, donated $1,700 to have it completed. That's about $30,000 today.

With repairs made and the Gothic Revival church building finished, the smaller wooden chapel built in 1836 was put on rollers and moved a couple of miles north on Plantersville Road to a site near what became U.S. Highway 701. Now known as Prince Frederick Summer Chapel, it still stands there and is used for special services.

'Never meant to be'

As for the newly finished brick church, even its completion could not save it.

With the plantation system of enslaved, free labor gone, rice planting diminished and many landowners were no longer able to farm their lands or afford their properties. Most people moved away to find other means of making a living.

"After the war, there were very few of the congregation left, so the church never achieved the greatness it could have," Boyd, the county historian, said. "They went from millionaires supporting the church to those who were impoverished."

With the flock falling off, money for upkeep was hard to come by and, though valiant efforts were made in the 20th century to save the building, final services were held there in 1936, according to Boyd.

In 1966, the once-grand church had fallen into such disrepair, it was deemed unsafe and the main body of the building was demolished. In 1974, the ruins were listed in the National Register of Historic Places.

"I like to call it 'the church that was never meant to be,'" Boyd said. "It happened at the worst possible time."

Now, only the weathered façade and tower remain behind a chain link fence to keep out trespassers, and more than half a century of being at the mercy of the elements has taken a toll.

Though it still stands as a silent sentinel to the past, seedlings have taken root atop the building's remnants and cracks have formed in the remaining walls. Eventually, the roots will grow and further compromise what's left of the once-elegant structure.

Now, standing quietly along a little-traveled road, it's just a showpiece of the past, where visitors sometimes like to breathe life into the crumbling ruins.

"The locals say they can walk past the church on a warm summer evening and hear the choir singing," Boyd said. "It's actually the wind blowing through the pines."

Tales of Gunn's ghost in the tower also abound, but if he's there, the contractor is probably just keeping watch on what's left of the imposing church he started constructing two years before the Civil War came along and its aftermath ultimately finished off his unfinished work.

Prince Frederick Church ruins are on Plantersville Road off U.S. Highway 701 north of Georgetown. A privacy fence surrounds the property to keep out trespassers, but the church's remnants can clearly be seen from the road. The smaller original church was moved north on Plantersville Road in 1877 and sits east of U.S. 701.