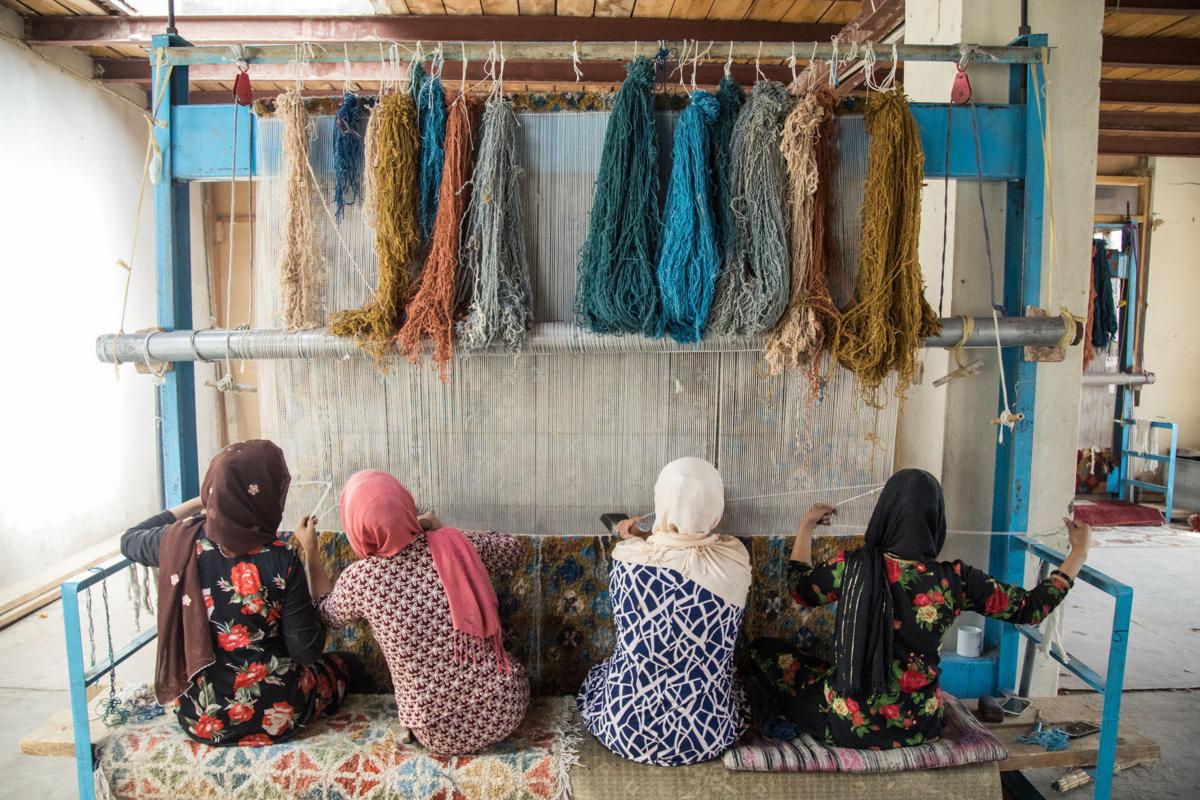 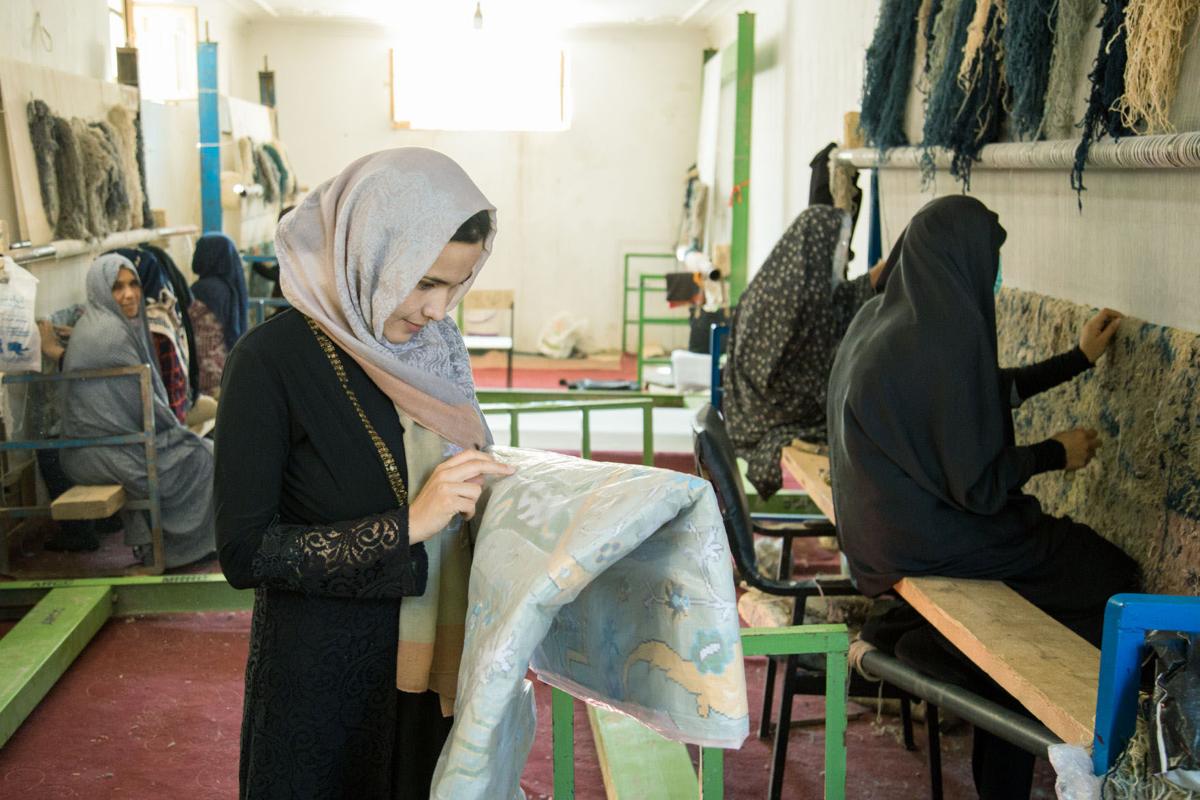 A carpet-weaving center in Mazar-e Sharif, Afghanistan. The project's aim is to keep rug production inside the country, and therefore retain more of the generated income. Naimat Rawan/Provided 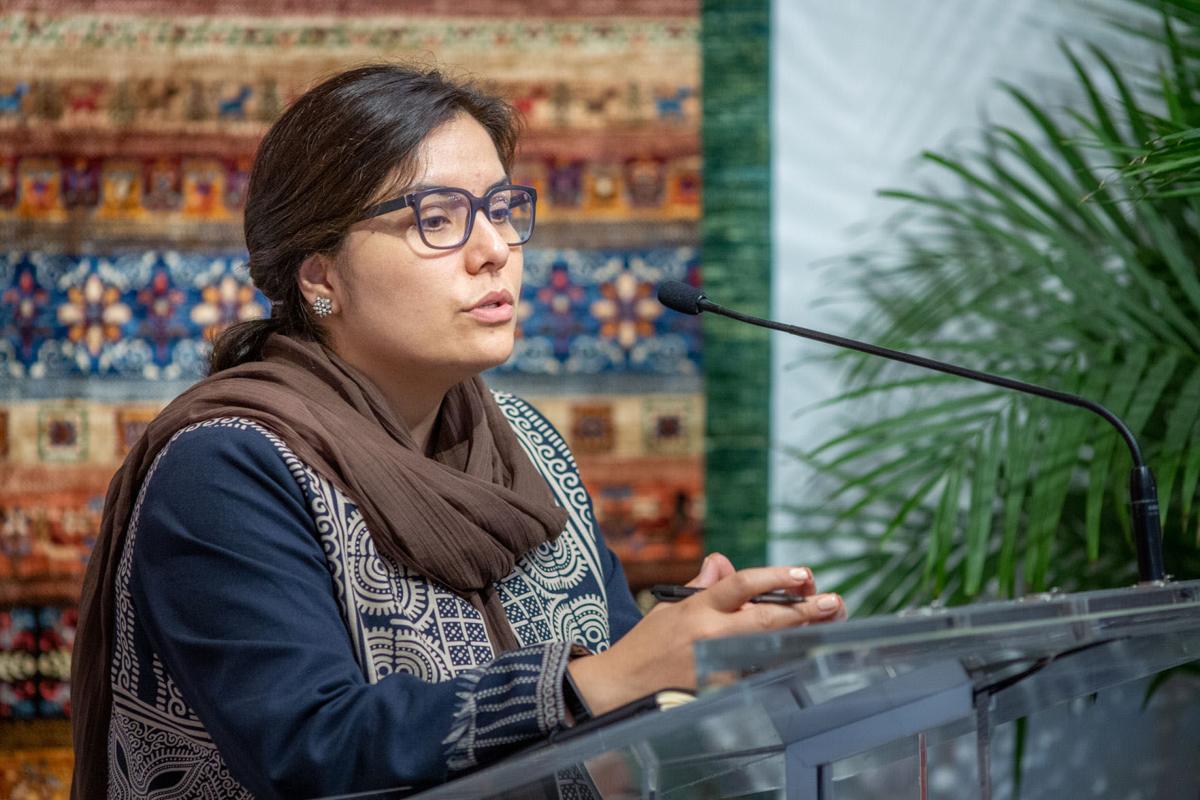 Najlla Habibyar is the Kabul-based project manager for the USAID-funded initiative. She works with 65 companies to build capacity, secure access to international markets and create long-term financial viability. Najlla Habibyar/Provided 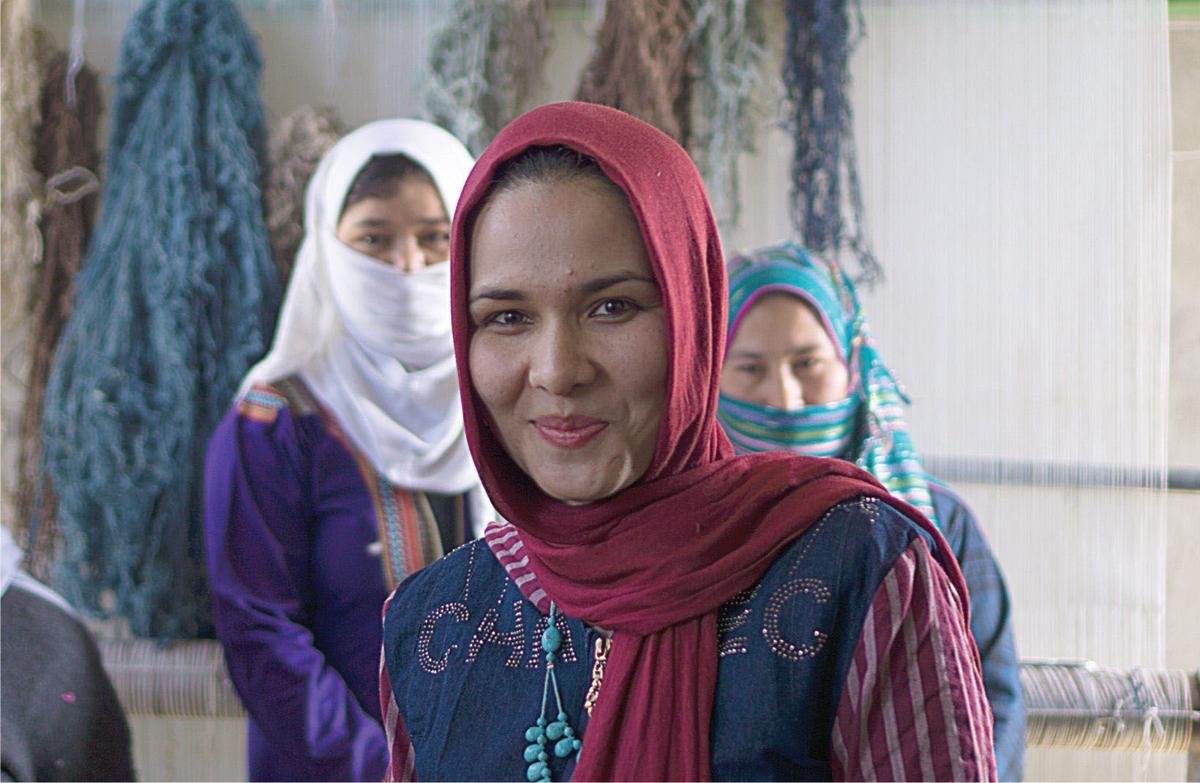 A weaving supervisor and rug makers in Afghanistan. Provided 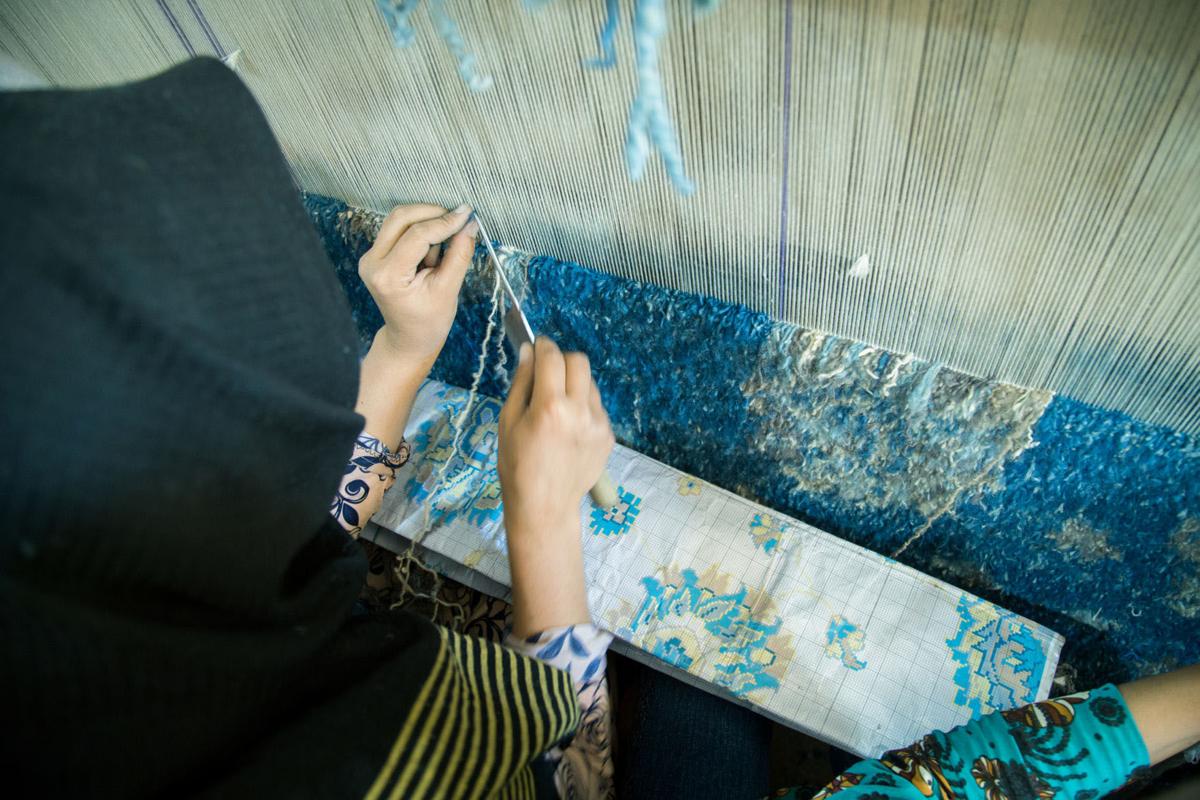 A woman at the loom, hand-knotting an Afghan rug. Naimat Rawan/Provided

The handwoven Afghan carpets are beautiful examples of persistent human industry in the face of obstacles that sometimes can seem overwhelming.

They are small miracles of an indomitable creative spirit, but they are something else, too: an expression of justice and solidarity.

A Kabul-based project, funded by the United States Agency for International Development (USAID) and run by Charleston resident Rob Leahy, is helping to empower the women who weave these intricate rugs, providing them a bigger share of the income and opportunities to gain access to education and business development training.

Two years ago, Leahy established Impact Carpet Associates after securing $9.4 million from USAID for a three-year project. In Afghanistan, he set up the Kabul Carpet Export Center. It’s been tough going. Afghanistan’s patriarchal theocracy does not allow women much freedom, and the coronavirus pandemic has caused disruptions.

Gift between friends: An autographed image of Afghanistan's Mona Lisa

“This is something I’ve worked on for a long time,” Leahy said. “I was happy to see it had begun to make a difference before the world came to a halt.”

Leahy is an experienced carpet appraiser and broker who operates Fine Rugs of Charleston on Meeting Street. He has been traveling to Afghanistan since 2007 when, at the invitation of the U.S. government, he helped to assess whether the country’s traditional rug-making practices could become a sustainable business that leverages existing resources, labor and infrastructure.

In 2017, Leahy answered a “Request for Information” issued by USAID, which led to a contract.

Carpet weaving is Afghanistan’s second biggest legal export business, after agriculture (pistachios, dried fruits, etc.). The concept of the USAID project, Leahy said, is “to make the Afghan manufacturers aware of the needs of the customers (mostly in Europe and the U.S.) and to help them develop the procedures to satisfy (those needs) so they could establish long-term relationships.”

Afghan carpet production has long been outsourced to Pakistan, taking much of the income with it. Leahy and his team wanted to encourage domestic production and build equity in a fragile Afghan economy.

“The hope is they will make rugs not war,” he said. “It sounds trite, but it’s as simple as that.”

Afghan rugs have a unique geometrical look, Leahy said. They are made of lustrous sheep’s wool woven onto a cotton support structure and colored using vegetable dyes. A medium-quality 8-by-10-foot rug has around 20,000 knots tied by hand. A fine-quality rug of the same size can have around 50,000 knots.

It can take as long as a year to make a large fine-quality carpet, which will sell for about $5,000 in the U.S.

Rug making often is a family affair. The men gather materials and prepare the loom; the women weave.

Because the project generated income, it is likely to persist even after USAID funding ceases, Habibyar said.

The three-year project goal is to generate more than 70,000 square meters of carpet in partnership with nearly 35,000 weavers. Scaling up is a realistic pursuit, she said.

“The number of people involved in the carpet industry is huge, with huge potential of increasing that number,” she said. It’s a critical part of Afghanistan’s economic growth strategy. “It’s something that all those people can do in their houses.”

Demand is high, and growing, but most Afghan carpets have gone to Pakistan for processing and distribution, and that has eaten into the revenue potential for the carpet makers, Habibyar said. So she and her colleagues are working hard to establish supply chains and distribution solutions in-country.

Currently, the government subsidizes freight costs at 80 percent. “But as soon as that subsidy is gone, the price of carpets will go up,” she said. That’s why it’s important to solidify supply-chain partnerships.

One of the companies Habibyar’s Kabul Carpet Export Center (KCC) works with is the Istanbul-based Khal Mohammadi Rugs. Asad Khall is sales manager. He connects KCC with retailers and wholesalers, traveling between Turkey and Afghanistan every few months, and he works with weavers and providers of the raw materials needed to make the carpets.

Typical income for a weaver can reach about $100 per month, which in Afghanistan goes pretty far. The average yearly per capita income is about $410.

Khall said the work generally is good for Afghan families.

“In one family there might be two or three weavers, and they work at home, take care of their families,” he said. “When they have time, they sit at the loom.”

Jennet Robinson Alterman spent time in Afghanistan in the late 1970s, before the Soviet invasion. Not much has changed there since then, she said. The Taliban rule and women are subjugated. It was her experience in Afghanistan that touched a social justice nerve and transformed her into an advocate for women’s rights, she said.

Alterman first met Leahy around 2010, when Connie Duckworth’s Arzu Studio Hope arranged to show Afghan rugs in Charleston. Arzu Studio Hope was the predecessor to Leahy’s Impact Carpet Associates. It provided women a safe place to weave rugs, and secured the cooperation of their husbands by paying for health care and schooling, according to Alterman.

Now it’s Leahy and his team who are forming a coalition of weavers and, by cutting out the middle man, ensuring they receive a bigger share of the profit.

Fine Rugs of Charleston, 1523 Meeting St., will host a pop-up carpet sale June 26-July 6. Around 800 rugs will be available for purchase, from small doormat and hallway rugs to large 12-by-15-foot throw rugs. Prices range from $50 to $4,000. All of the proceeds will go back to Afghanistan, according to Leahy.

Buyers might not realize the impact they are making, Alterman said.

“When they purchase (a rug), they’re making a huge difference for at least one family in Afghanistan,” she said.

Veteran Jon Darling, back from war, finds a wife and his way on a S.C. farm