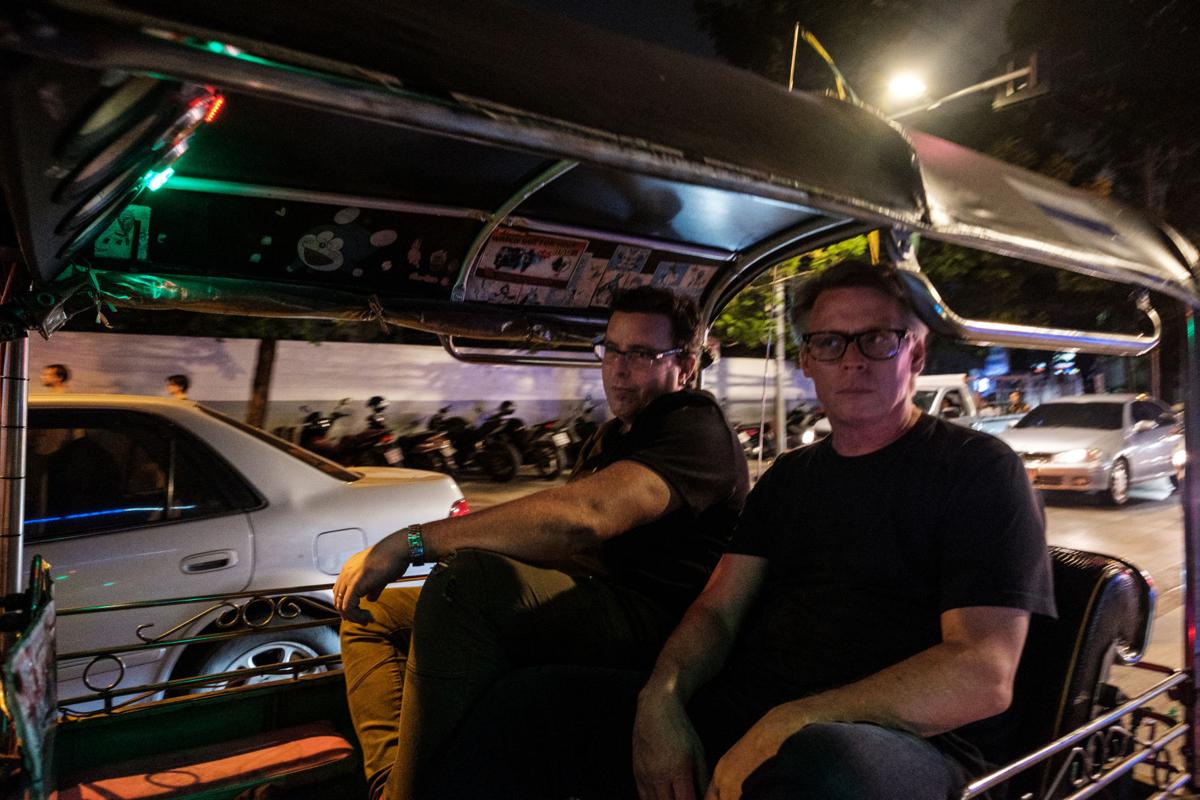 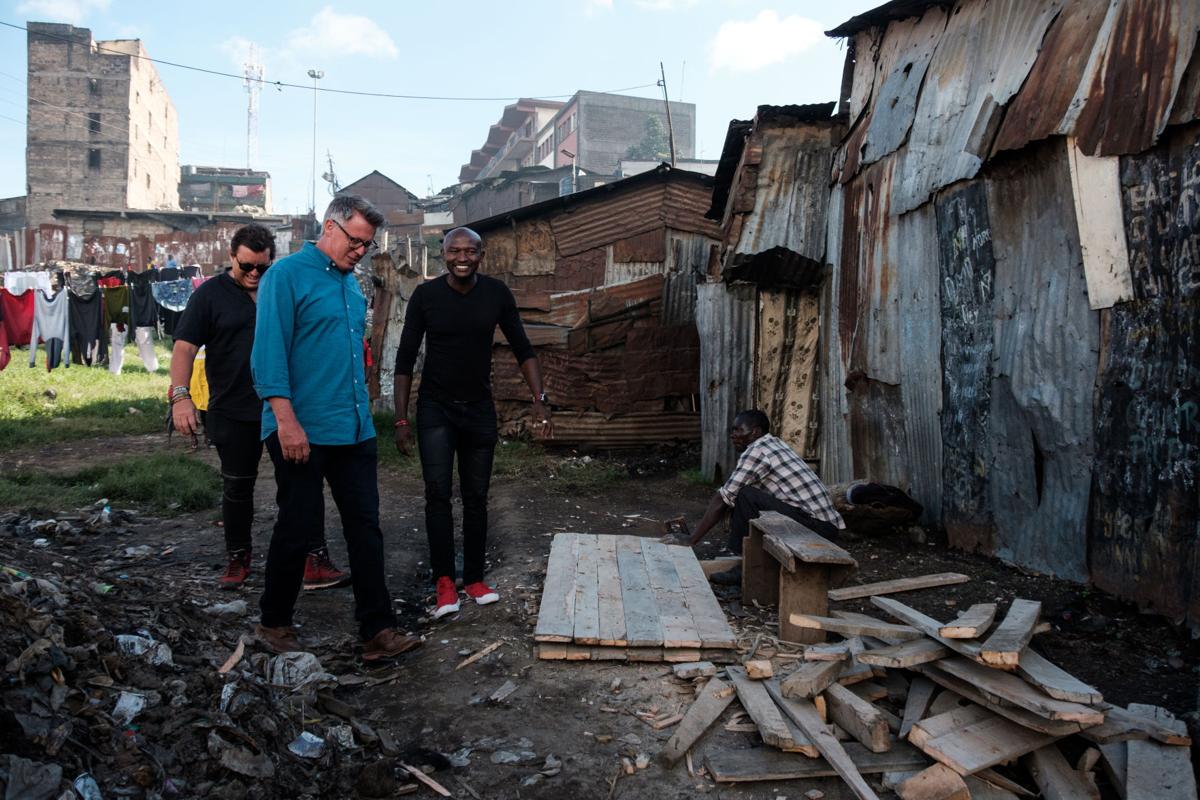 The "philanthropologists" in Africa, filming an episode of "The Good Road." Provided 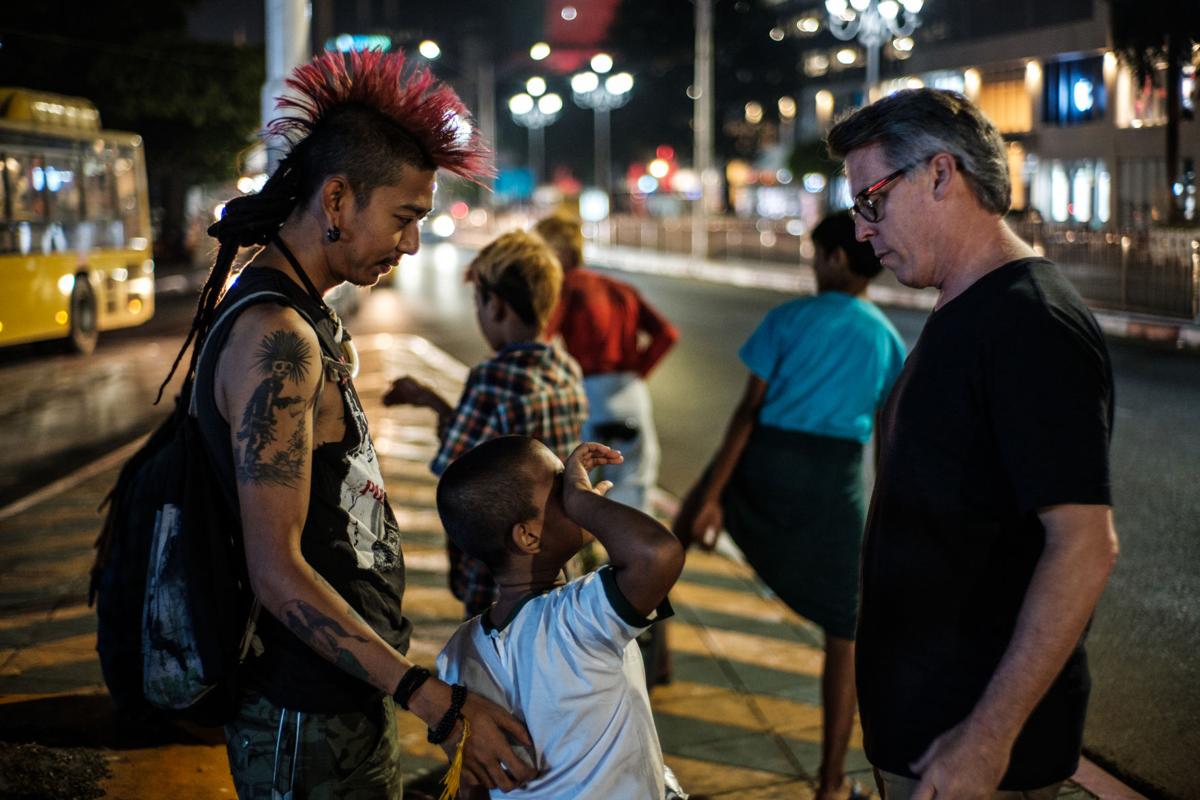 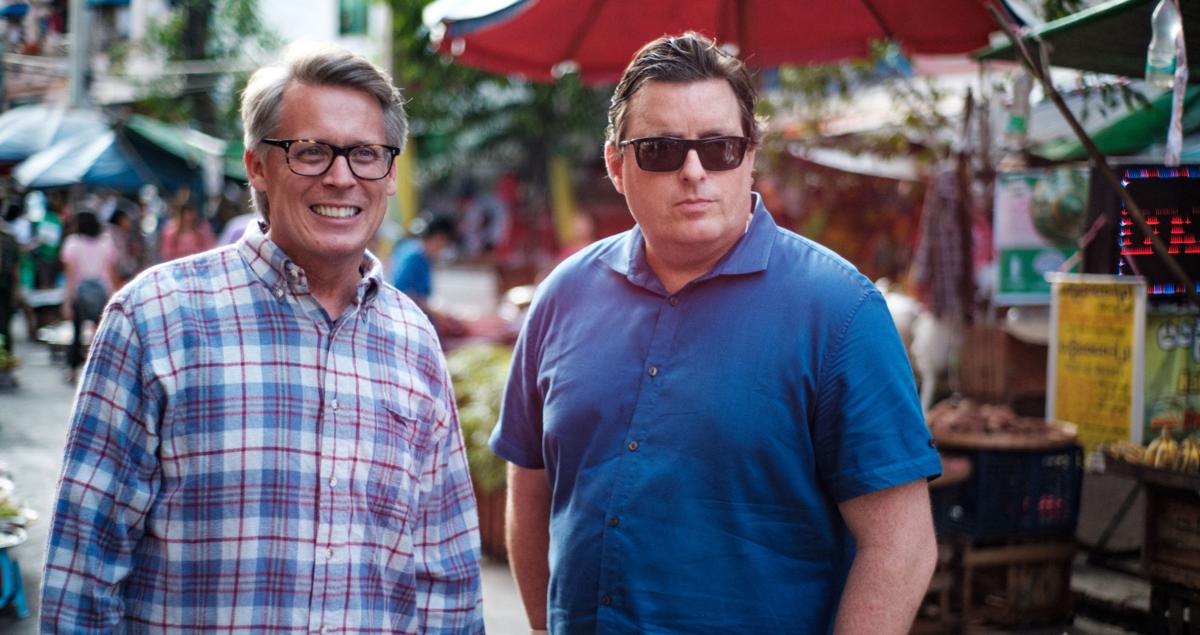 Earl Bridges (left) and Craig Martin, both sons of missionaries, went to high school together in Bangkok, Thailand. Provided 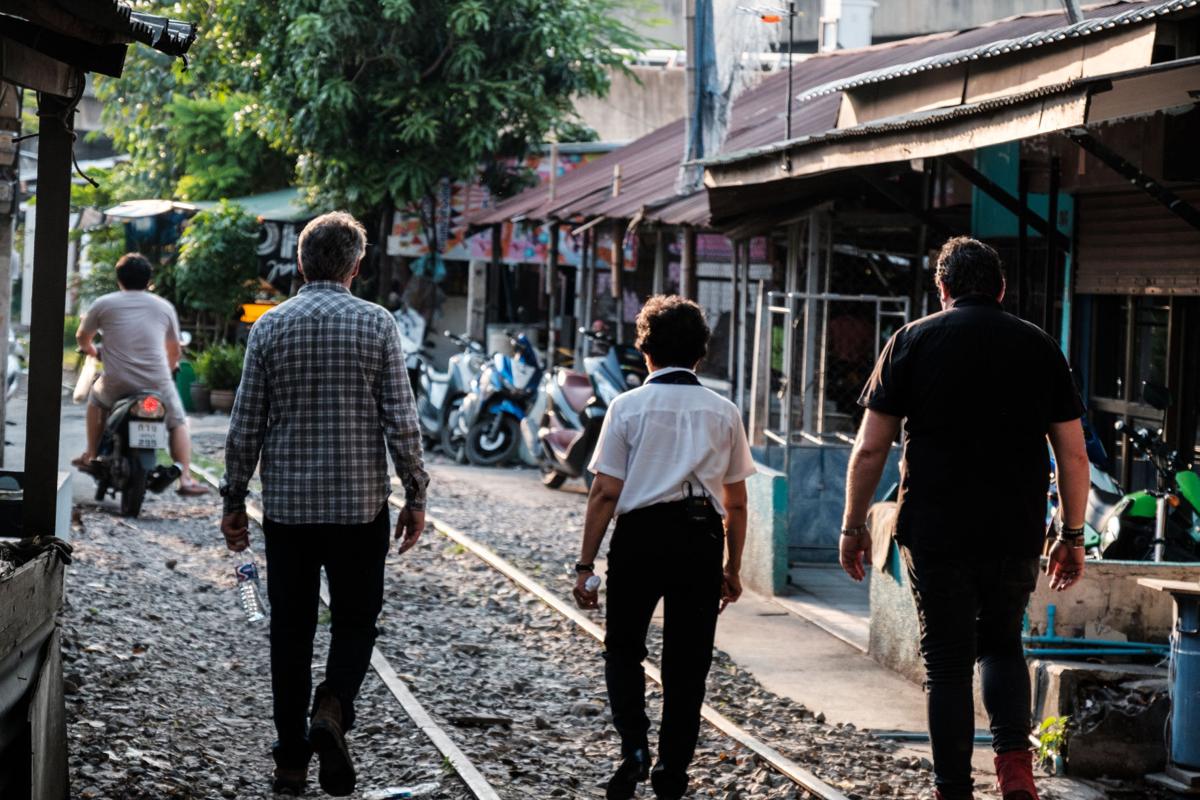 Shooting an episode of "The Good Road" in Bangkok. Provided 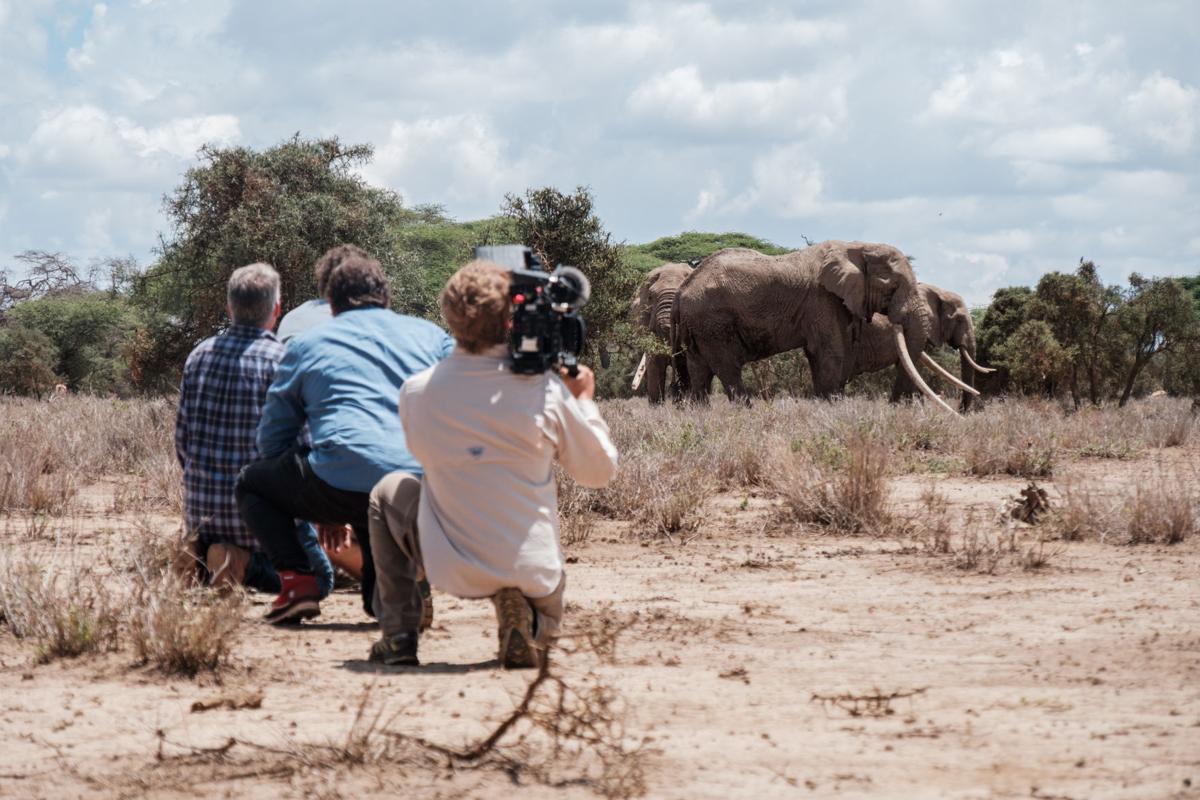 Filming in Kenya, the team encountered Tim the elephant. Provided 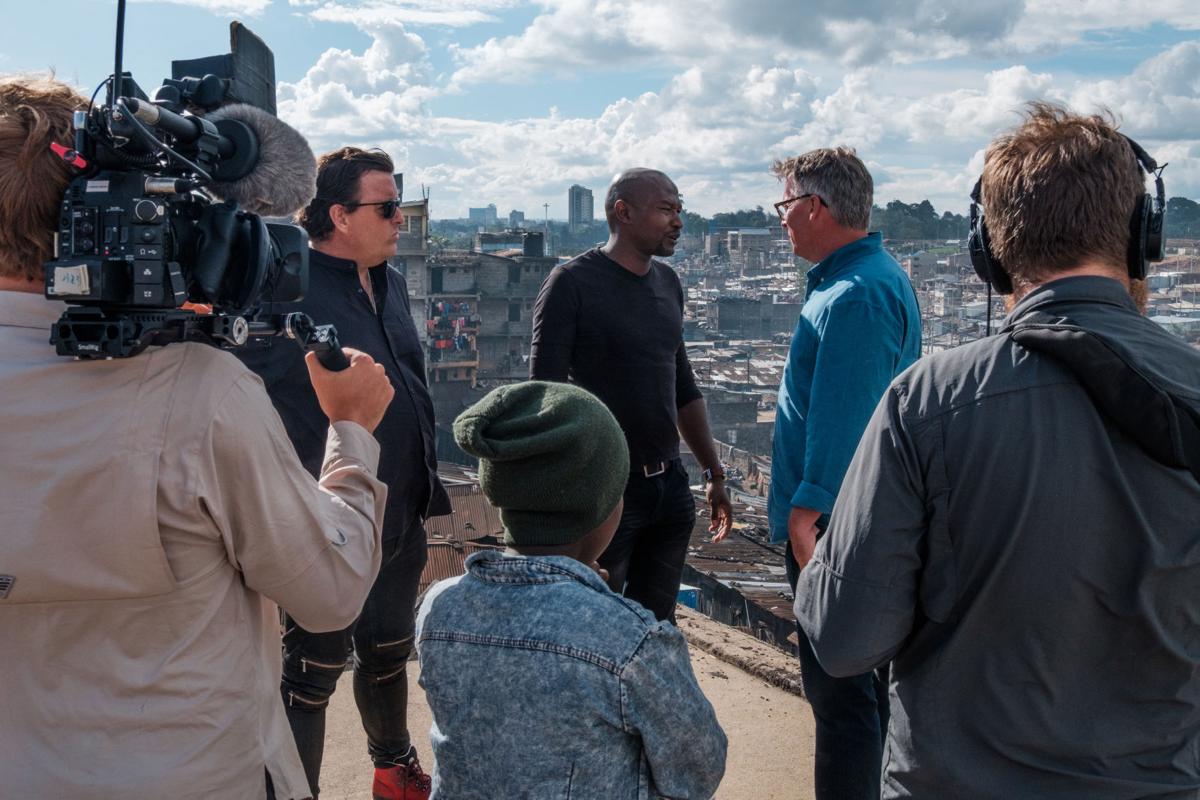 Shooting an episode of "The Good Road" in Africa. Provided

They went to high school together in Bangkok, Thailand. Both were members of the basketball team, and they became best friends. Craig Martin was the son of Baptist missionaries; Earl Bridges was a military kid whose dad, a Vietnam-era Air Force pilot, decided to settle in Bangkok as a missionary after the war. The two boys tore up the town.

Then they went their separate ways. Martin earned a graduate degree from Baylor University in film and television production, spent four years in public television and then 26 years in the media department of the International Mission Board, an affiliate of the Southern Baptist Convention. Bridges, a Charleston resident, became a business entrepreneur. He co-founded Good Done Great, which provided philanthropic software solutions to corporations and nonprofits.

In 2018, Martin and the rest of his communications team of 30 people were laid off because of financial restraints. Around the same time, Bridges sold his company to YourCause and had about $1 million to invest in a new venture.

It took months of travel, filming, networking, sponsorship-hunting and negotiating, but that new venture, season one of a TV series called “The Good Road,” will debut on 350 public television stations across the country, including SCETV, on April 6.

It’s a travel show in the style of the late Anthony Bourdain’s “Parts Unknown,” but, instead of focusing on food, it highlights the philanthropic efforts of some extraordinary people in Asia, Africa and the U.S.

Bridges and Martin, along with a crew of five, filmed episodes for the first season in Thailand, Kenya, Myanmar, Tanzania, Uganda and Alabama.

They revisited their high school stomping grounds to talk about river conservation, learned about the challenges of introducing internet services in remote parts of Kenya and of confronting poachers, met doctors in eastern Uganda working to reduce a 52 percent infant fatality rate, hung out with a punk rocker in Myanmar who delivers social services to the needy and discovered a ministry providing a safe refuge to residents of Alabama Village, where gunshots regularly ring out.

Bridges brings a hard edge to the series and, behind the scenes, looks after the business side of the enterprise. Martin brings empathy, courage and technical smarts.

Both have lots of worldly experience, so executing the travel show idea came naturally. Bridges studied international business at the University of South Carolina and speaks several languages (at least passably). He has lived abroad, in Portugal, in Mexico. In 1999, he started Tribal Beat selling musical instruments from around the globe, such as sitars, bagpipes and didgeridoos (hey, somebody’s gotta do it). He worked at Blackbaud for a spell.

Martin is of a missionary mind, and he has created all kinds of media for IMB and public television.

In 2018, Bridges had plans to travel east and reconnected with Martin just as his old friend was looking for something new to do. Bridges invited him along as the cameraman.

“We took a trip to Myanmar, Nepal and Vietnam, and I was the video guy,” Martin said. “Earl tells me at some point in the trip: ‘I’ve got an idea for a TV show.’”

And then Bridges explained that the show would be “about people who do good in the world.” He promised it wouldn't stink.

“I got really excited,” he said.

They considered which TV companies would be interested in a new kind of travel show and settled on public television, specifically WETA in Washington, D.C., which produces Ken Burns’ documentaries, the PBS NewsHour and other programs. WETA used to have a successful travel show called “Globe Trekker” for 17 seasons and now was glad for a chance to fill that void, Martin said.

“The Good Road” relies a little on comedy’s straight-man formula, with Bridges in the role of boundary-tester and Martin in the role of responsible adult, though their personalities are the other way around in reality.

“He’s the bravest guy I’ve ever met, a super trusting soul,” Bridges said of his friend. Martin is the one who wants to get out of the car when something interesting (if vaguely threatening) comes along. Martin is the risk-taker, the one who doesn’t mind confronting the giant elephant. “He’s fun to travel with.”

About that elephant: Tim was a dominant male in the Kenyan bush, one of very few that boasts the biggest tusks still attached to a living beast, and it was protecting its heard as the documentary crew, led by local park ranger Craig Miller, approached.

Miller told the others to hold their ground if Tim charged.

Then walked away with a huff.

“That could have easily gone sideways,” Bridges said with a laugh. “That could’ve been the end of the show.”

Just outside Mobile, Ala., is an extremely poor area called Alabama Village. The neighborhood's African American residents live in fear, and young people are subsumed by gangs — and gang violence. Murders are common.

But escape is possible for some, thanks in part to John and Dolores Eads and their Light of the Village ministry. The Eads founded the Christian ministry in 2002, securing a building that once was a crack house. Today, the nonprofit operates a day school, after-school program, summer and Bible camp, candle-making business, teen ministry, and community outreach program in Juarez, Mexico.

The young people of Light of the Village, often the focus of charities, turn the table for a few weeks each year by assisting poor families across the border, building homes. This gives them a sense of purpose and teaches a valuable lesson: that no matter how desperate their circumstances, others also are in need. They learn not only that they are not alone in the world, but that they also possess the ability to transform it.

This is what caught the attention of the documentarians, who focus their Alabama episode on 16-year-old Jesse, a devoted acolyte of Light of the Village who is accepted to college and might just find a way out.

While the crew is shooting interviews, gunfire can be heard. And before they finish filming, Bridges and Martin learn that Jesse’s mom has been shot to death.

John Eads said the brutal reality of life in his neighborhood made an impression on the filmmakers.

“They were able to capture all that, kind of in real time,” he said.

They were able to capture it because of the credibility that Eads has cultivated over the course of 20 years. Residents know him well, appreciate his devotion and trust him.

“Because of our longevity there, all the guys prone to (violence), we’ve known them since they were kids,” Eads said. “Not only do we know the victims of crime, but we know the ones who perpetrated it.” Guns are ubiquitous, and they come out for show, and often when someone feels insulted or angry. Murder can be the result of the smallest emotional impulse, Eads said.

Light of the Village maintains a memorial wall on which they attach photos of neighborhood people killed over the years: 41 faces, a reminder of the terrible uncertainty that permeates Alabama Village.

Eads can’t know who will be next, and who will next manage an escape to safety. This is what motivates him to carry on, he said.

“If you look at the community as a whole, it doesn’t look so good,” he said. “Violence is higher than when we arrived. However, if we look at individuals, that’s different story. That’s a little more positive. ... That helps a lot with burnout and so forth. You have to look at the little victories.”

One of those victories, as “The Good Road” makes clear, is Jesse.

The series really is all about victories: The ways human endeavor can solve problems large and small and transform lives. Now they are working on season two, which likely will feature episodes in Charleston, Richmond, Austin, Puerto Rico, India, Thailand, The Netherlands and the country of Georgia.

Martin and Bridges will feature a new group of change agents, creative entrepreneurs and charitable souls.

They are, to use a word coined by Bridges, "philanthropologists" in search of good.

“You can go in the darkest places, and you will find the brightest light,” Bridges said.