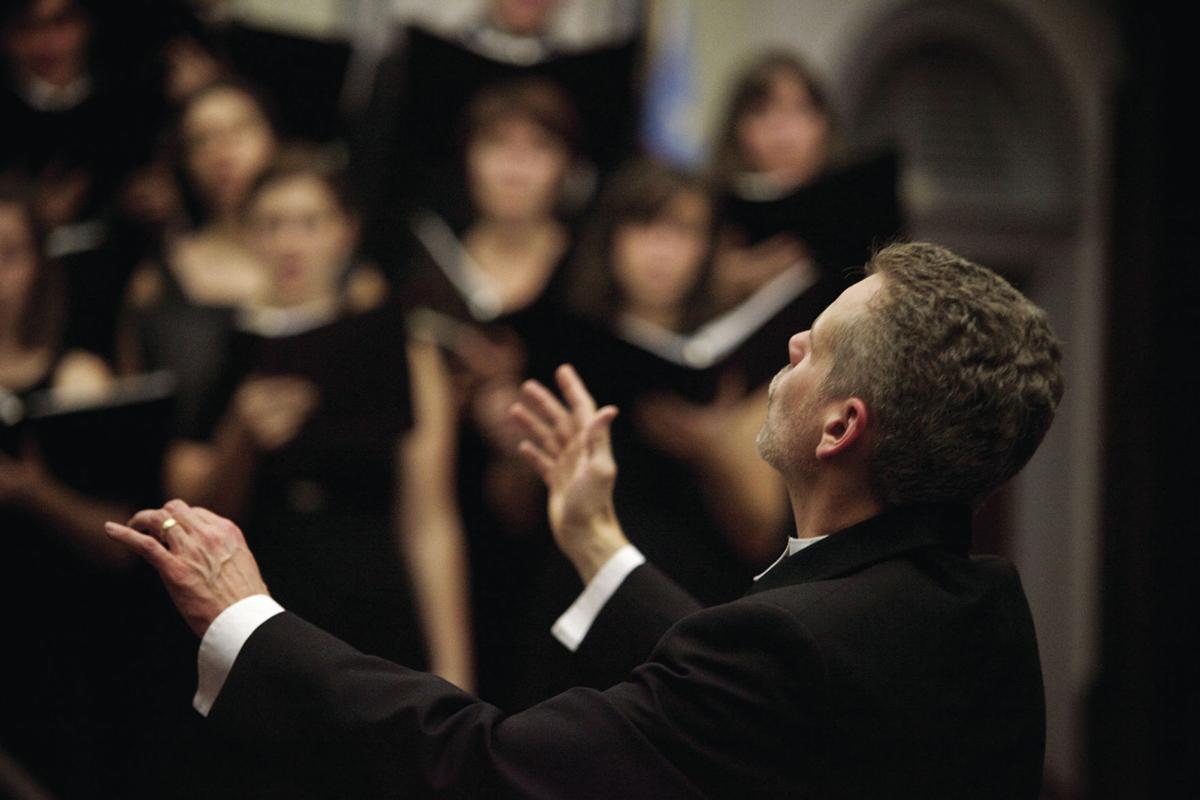 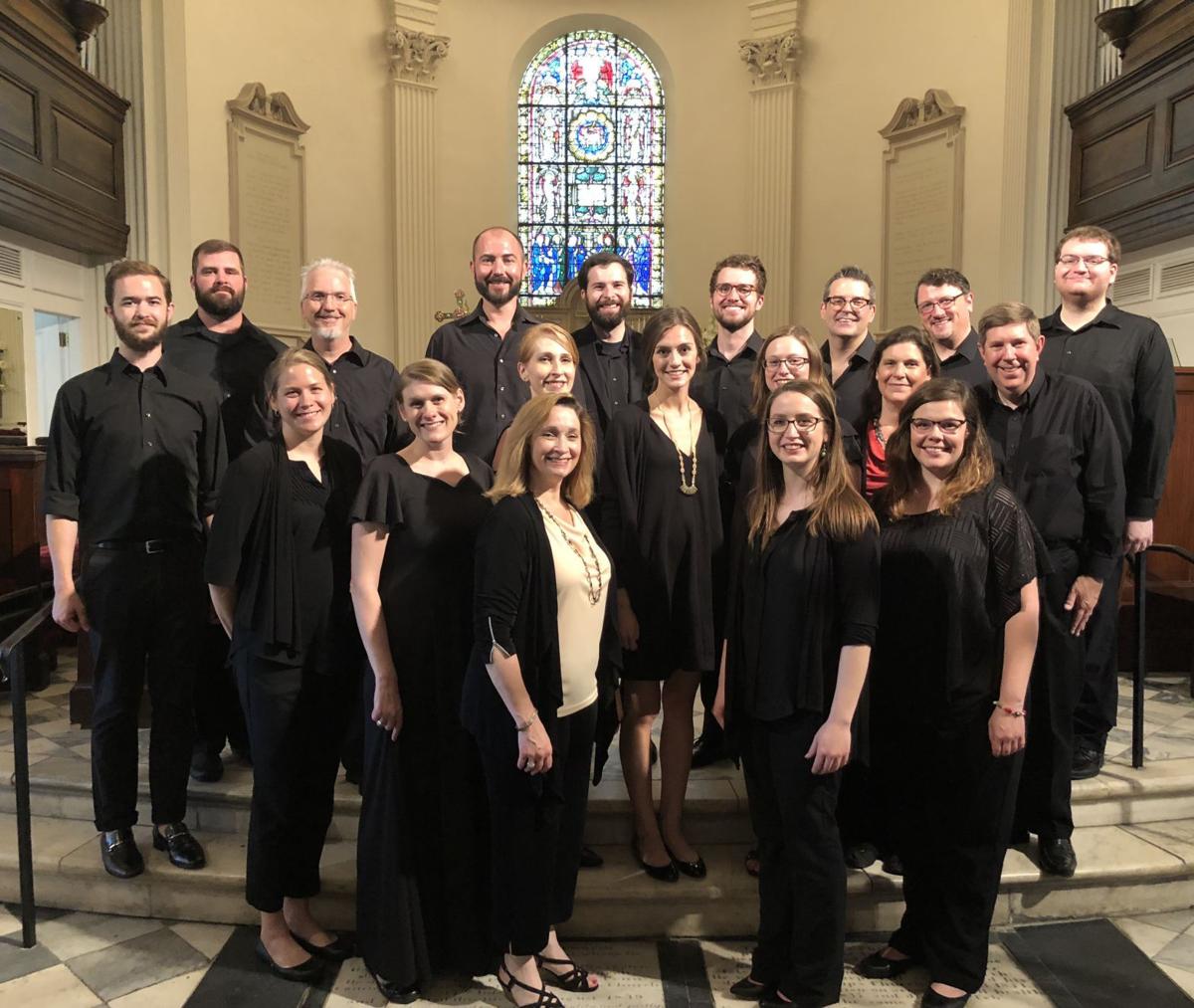 The King's Counterpoint is a small professional choir that has been sidelined by the coronavirus pandemic. Provided 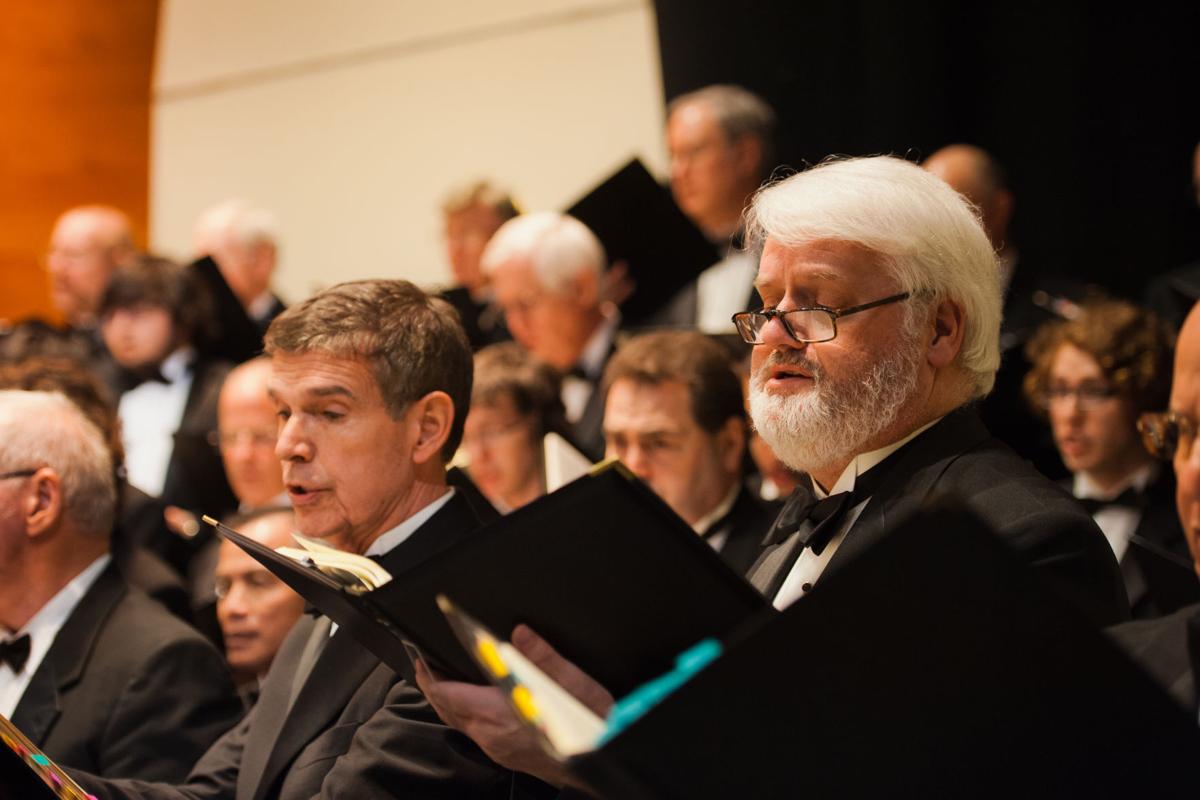 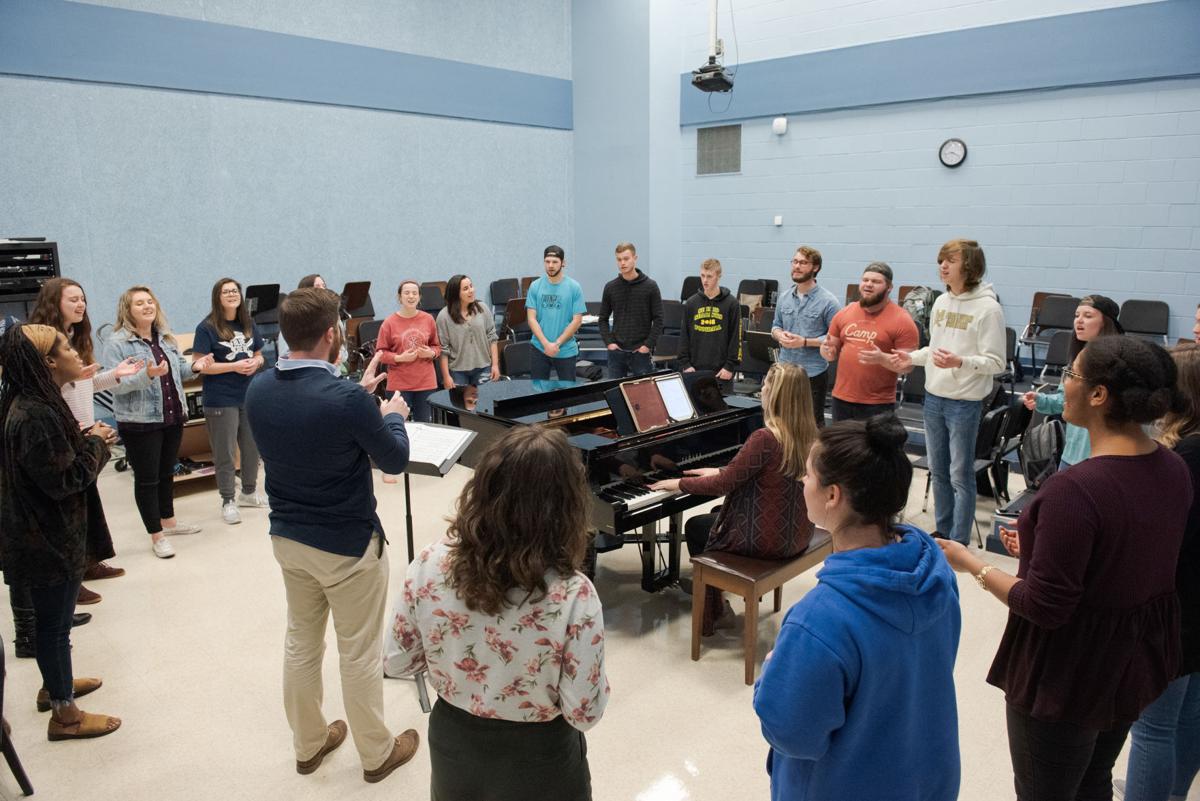 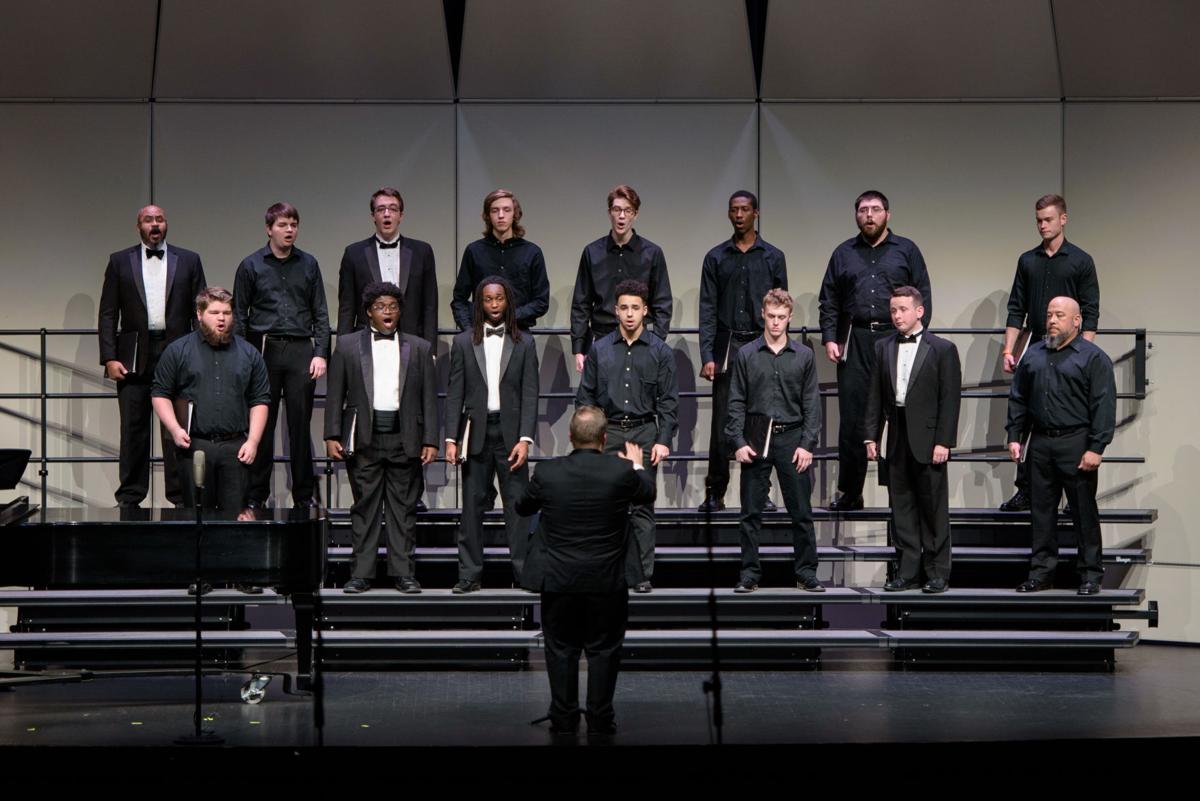 The human voice is the first (and, many would insist, best) musical instrument. Music of all cultures and traditions began with singing.

The voice always has been fundamental, and the only instrument that conveys directly the contents of the soul and spirit without required assistance from any external object.

One voice is fine, but add others and you have the option of singing different melodic lines at the same time (polyphony). Or you can use certain voices to create an accompaniment to the melody (homophony). Either way, the effects can be sublime. Nothing quite matches the resonant warmth and emotional punch that a group of singers can deliver, nothing better conveys the inherent artistic gifts of the human species.

Today, choral singing is under threat from a microbe that has made a mockery of the natural human inclination to congregate and cooperate with one another. Speaking can be dangerous enough in close proximity; singing is worse. Choral singers articulate clearly, carefully pronouncing each consonant, they project their voices using practiced techniques, they inhale quickly and then focus calibrated airflow through their vocal chords to produce just the right tone and volume. As a result, they emit droplets of saliva and produce an invisible aerosol mist that can travel several feet and linger in the air.

And they stand elbow to elbow in rows. If one singer is sick, germs are sure to spread. And social distancing on stage likely won’t help much. The singers would need to be about 20 feet from one another. A barbershop quartet or an octet singing Renaissance madrigals might find a way to manage, but a larger ensemble is stymied.

David Acres, music director of professional local ensemble The King’s Counterpoint, said the losses incurred because of the pandemic have been substantial. Five concerts had to be canceled, including one at the last minute, after the group committed to paying instrumentalists.

He had hoped to be raising money to cover the costs of a weeklong residency at Canterbury Cathedral in England next year. Instead, he’s wondering if the singing will resume before the end of 2020, he said.

It’s a complicated calculus. The variables include the willingness of singers to convene; the rules and restrictions imposed by the authorities; the decisions made by churches and performance venues; the comfort level of patrons; and the status of the pandemic.

Reopening cultural venues is tricky and uncertain, but it's starting to happen

Would it work to perform in a venue that restricts capacity? Can The King’s Counterpoint select repertoire that only six or eight or 10 people can sing? Will the income from ticket sales be adequate to cover costs?

Acres said he’s hoping that the first step will be small concerts in big sanctuaries that can accommodate 200-300 safely. He will ask the 12-member Cantoras Charleston, a select group within The King’s Counterpoint, to spread out so official guidelines can be followed.

“We’ll do something before the end of the year,” Acres said. “Nothing can match a live performance. ... The only clear way for groups to commence is to do it in very small numbers.”

That means each singer must be capable of excellent sight-reading and possess a tone that blends easily, he added.

Much is uncertain, but at least The King’s Counterpoint has a couple of options.

“I cry for people who haven’t got those options,” Acres said. “Unless there is some big discovery soon, this could persist for months.” And then performing groups risk the effects of attrition or atrophy.

The Centers for Disease Control and Prevention has reported on the dangers of choral singing during the COVID-19 crisis. In its weekly report dated May 15, the CDC recounted a “superspreader” event in Skagit County, Washington, where as many as 53 of 61 singers contracted the novel coronavirus during a 2.5-hour rehearsal on March 17. One of the singers was known to be symptomatic. Three patients were hospitalized, and two died.

“Transmission was likely facilitated by close proximity (within 6 feet) during practice and augmented by the act of singing,” the CDC reported. “The act of singing, itself, might have contributed to transmission through emission of aerosols, which is affected by loudness of vocalization. Certain persons, known as superemitters, who release more aerosol particles during speech than do their peers, might have contributed to this and previously reported COVID-19 superspreading events. These data demonstrate the high transmissibility of SARS-CoV-2 and the possibility of superemitters contributing to broad transmission in certain unique activities and circumstances."

The CDC posted “Interim Guidance for Communities of Faith” in mid-May, in which it included this statement:

“Consider suspending or at least decreasing use of a choir/musical ensembles and congregant singing, chanting, or reciting during services or other programming, if appropriate within the faith tradition. The act of singing may contribute to transmission of COVID-19, possibly through emission of aerosols.

Pandemic will alter Communion rituals for many U.S. Christians

Then the page was quickly modified to remove explicit reference to the dangers of choral singing and to emphasize instead general social distancing, apparently because the White House had not approved the initial version.

The new language: “Promote social distancing at services and other gatherings, ensuring that clergy, staff, choir, volunteers and attendees at the services follow social distancing, as circumstances and faith traditions allow, to lessen their risk.”

Rob Taylor, director of the Taylor Festival Choir, College of Charleston Concert Choir and the CSO Chorus, said he and every other choir director in the country is thinking hard about what to do and keeping up to date on official guidelines.

“I’ve talked to dozens of colleagues in recent weeks,” he said. “Lots of people are weighing in.”

“We can still produce ensembles for the listener,” he said. “Technology is going to allow us to do things remotely until we’re given the green light to sing together. I’m going to follow the science.”

In the meantime, he will plan for several possible scenarios, live and remote.

The big concern is aerosol transmission. A couple of preliminary studies seem to show that singers are the worst culprits in the music domain, and that wind and brass players also are a concern, though the little evidence so far gathered doesn’t indicate that instrumentalists pose a significant risk.

The Chorus Connection, a company that sells project management software to choirs, recently produced a season planning report that includes a risk-benefit analysis for ensembles contemplating five options: “wait it out”; “postpone or cancel your season”; “minimize risks”; “plan a virtual season”; and “mix it up.”

Each option comes with significant threats and opportunities. Performing organizations that avoid the stage for too long risk losing audiences and the revenues they generate. Groups that forge ahead too aggressively could expose singers and patrons to the virus.

No one questions the need to do some contingency planning. But no one knows with certainty what those contingencies look like.

The National Federation of State High School Associations has commissioned research to study the effects of aerosol rates. The coalition it helped form to oversee the effort is co-chaired by Mark Spede, Clemson University’s director of bands and president of the College Band Directors National Association.

The research should lead to some safety guidelines and help choral directors and administrators decide how best to reactivate the music-making.

Michael Smith, executive director of the Charleston Symphony, is hoping that a program featuring Beethoven’s magnificent Symphony No. 9 will go on as planned on April 16. But it will require squeezing hundreds of musicians onto the Gaillard Center stage, including the large CSO Chorus. The singers stand shoulder-to-shoulder on risers whose rows are separated by inches.

“Singing in close proximity clearly adds an additional layer of complexity right now,” Smith wrote in an email. “We are very hopeful to be able to perform Beethoven’s 9th, whether it’s part of our season, or later in celebration. I say it this way because either way, it will have symbolic meaning. We can only perform that work if we make some real progress against this nasty virus.”

Charleston Southern University’s Horton School of Music and Performing Arts is among local arts institutions profoundly impacted by the pandemic. It has three choirs, two praise ensembles that include singers, and a lyric theater program. A total of around 150 students take part in these performing groups.

Jill Terhaar Lewis, chair of the vocal programs, said the major music associations — such as the National Association of Teachers of Singing, Performing Arts Medical Association, Chorus America — are working hard to establish and provide guidance.

“What we’ve learned is that we need to be patient and need to be cautious, and be as informed as we can to make the best decisions for everyone,” Lewis said. “There are things we can do together.”

Choral singing itself perhaps can continue in smaller groups outdoors. But there’s more to choir than preparing and performing big works, she said. Young singers need to develop sight-reading skills, to learn the repertoire, to take voice lessons and practice. These are thing that can be done individually and online.

“It’s tough, though, as a teacher you want to be able to make long-term plans,” she said. “Everyone is frustrated, that’s for sure.”