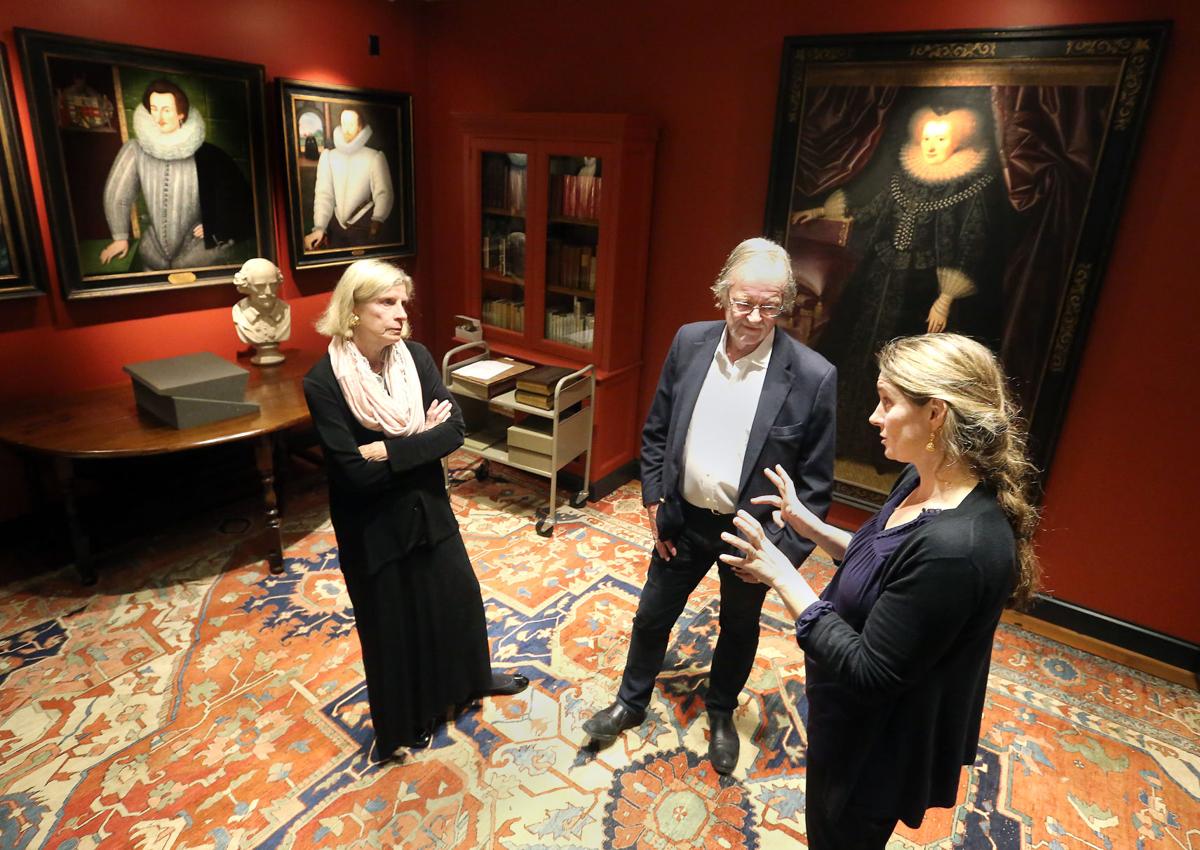 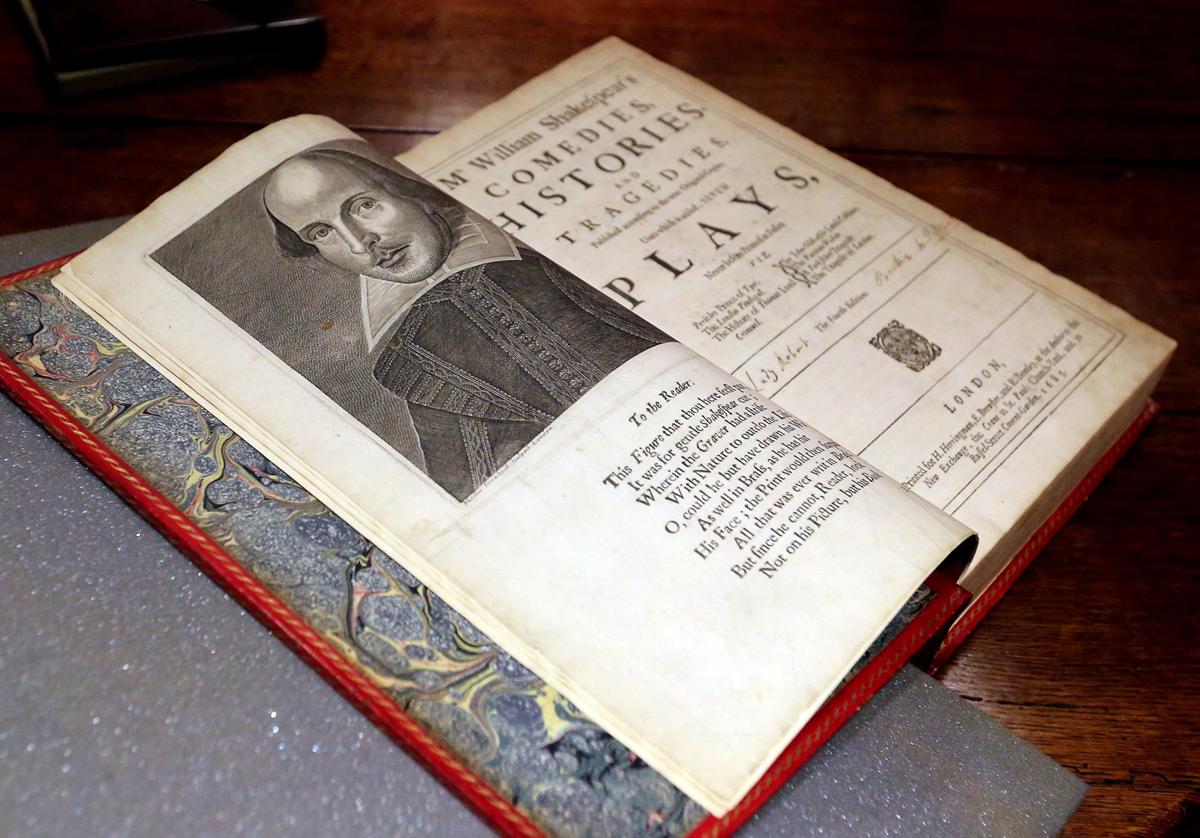 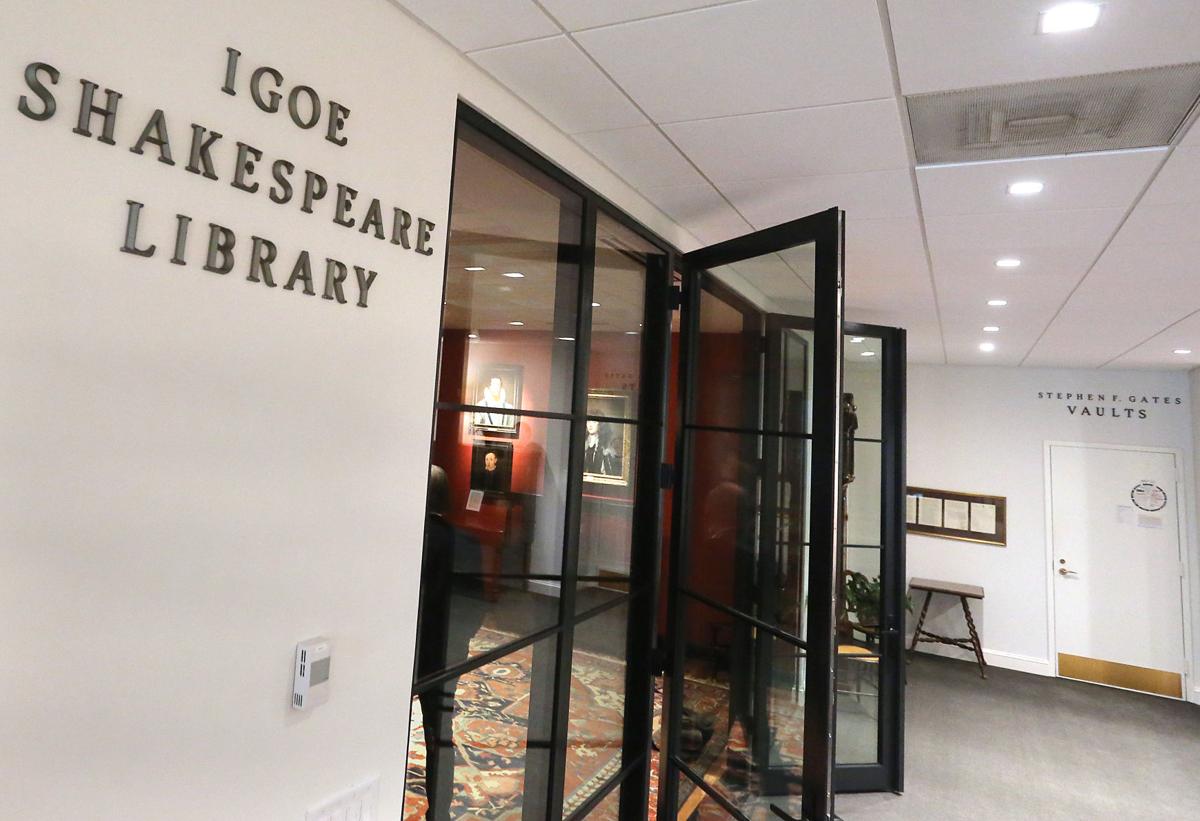 The new Igoe Shakespeare Library at the Charleston Library Society opens next weekend. It is home to a recently acquired collection of books, paintings and other items donated by Skipper and Ann Igoe. Brad Nettles/Staff 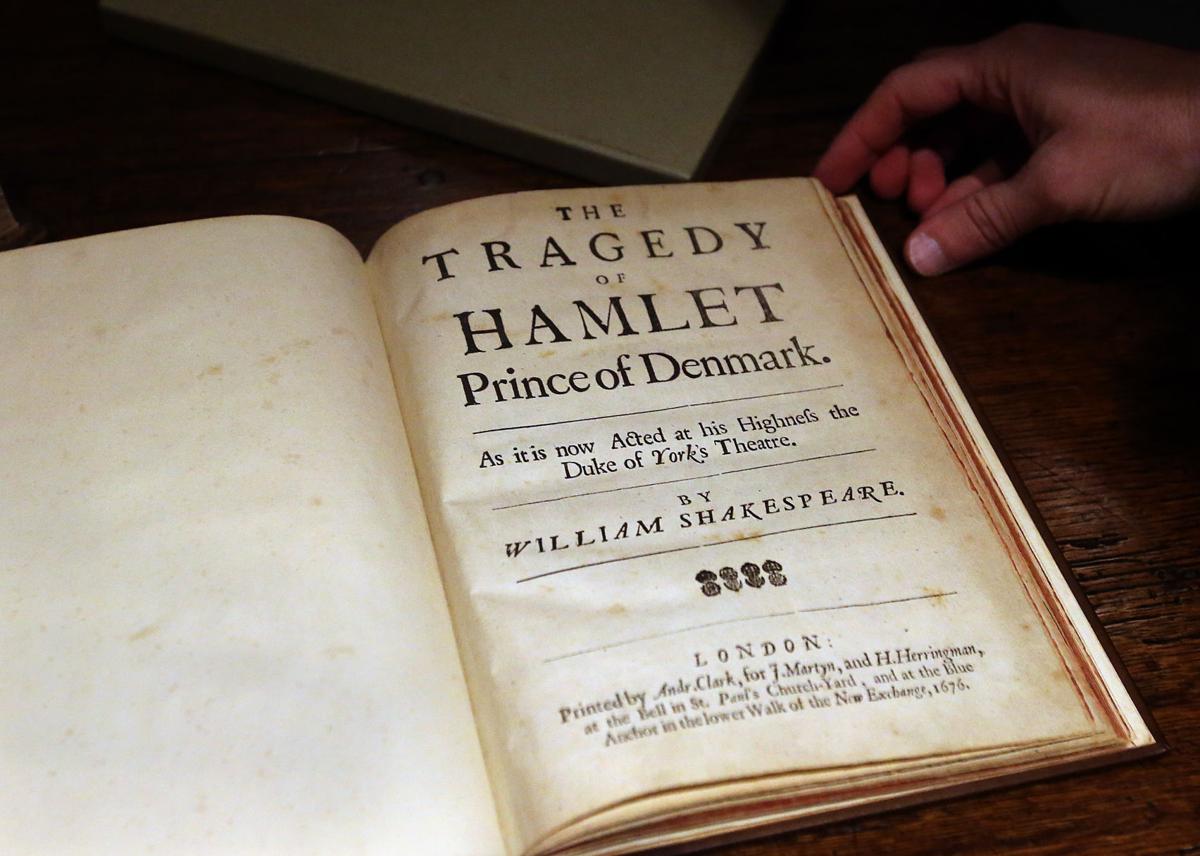 An old copy of William Shakespeare's "The Tragedy of Hamlet," part of the Charleston Library Society's holdings. Brad Nettles/Staff 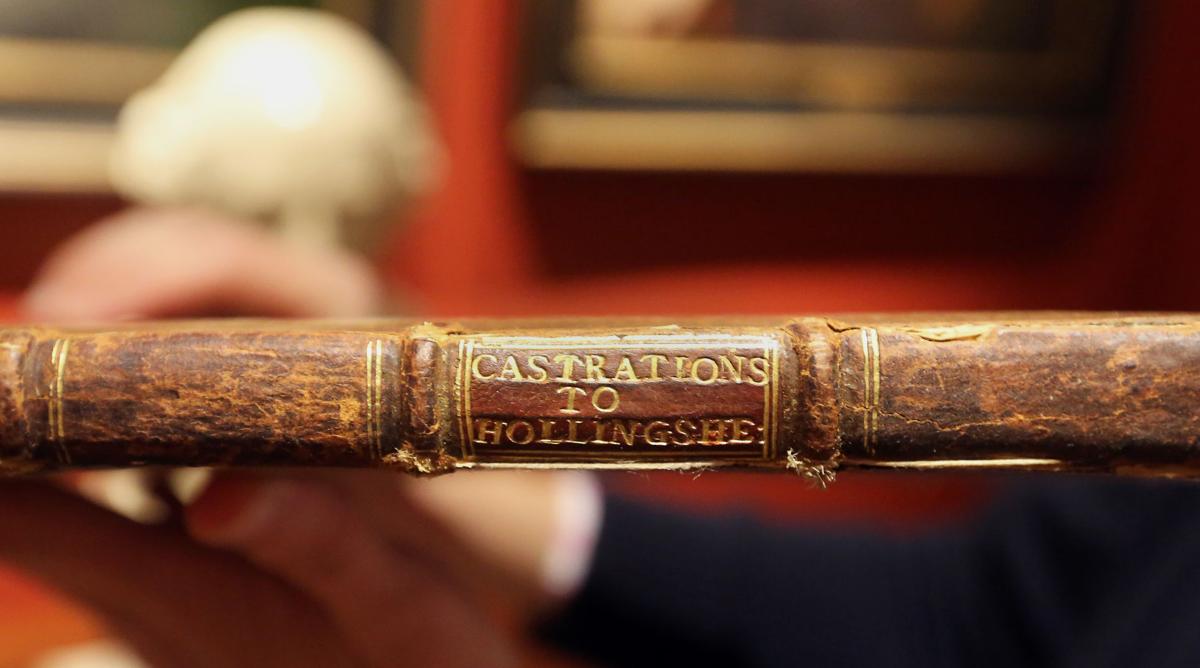 The "Castrations To Hollingshed" is a volume containing all the Scottish history that Queen Elizabeth had excised from the historian's grand two-volume Chronicles. It's part of the new Igoe Shakespeare Library at the Charleston Library Society. Brad Nettles/Staff 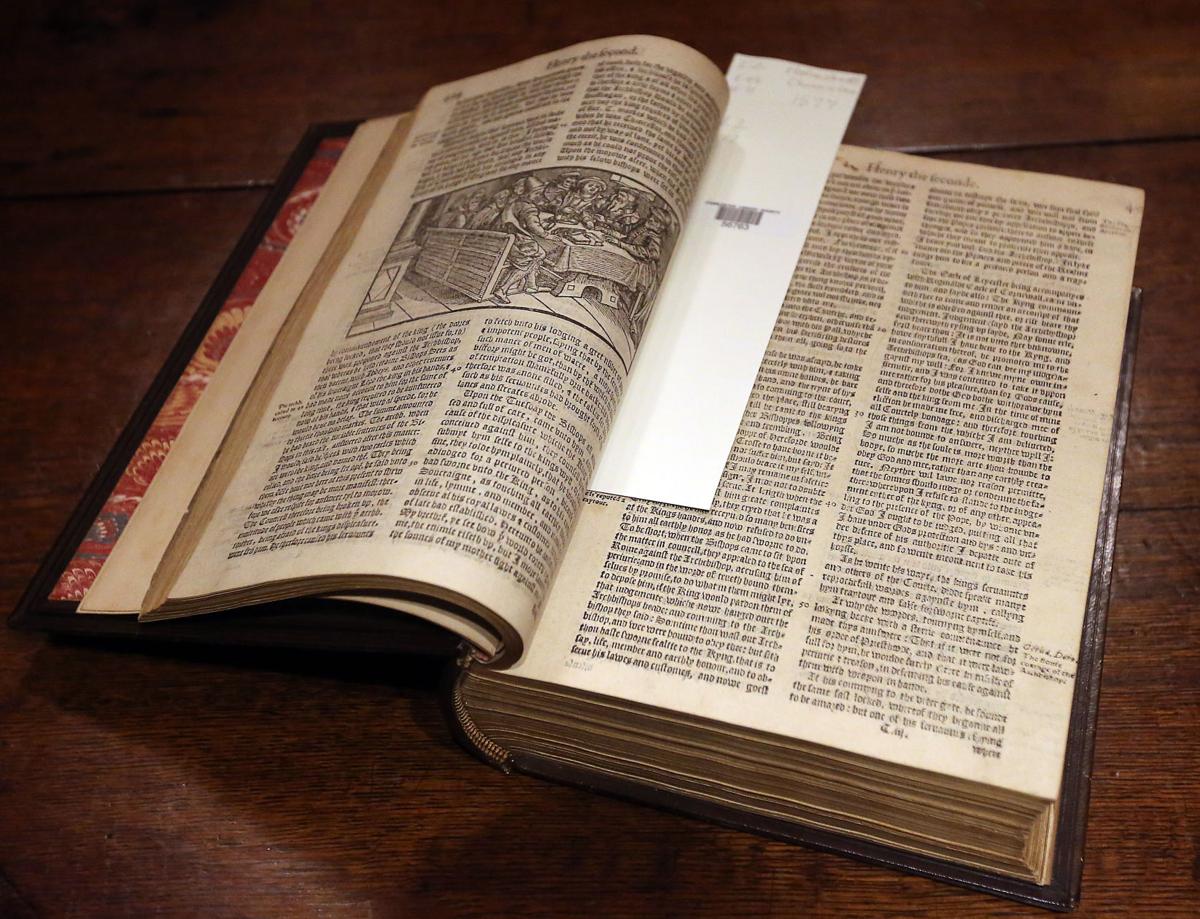 A copy of the 1577 "Holinshed's Chronicles," is part of the collection to be highlighted in the new Igoe Shakespeare Library at the Charleston Library Society. Brad Nettles/Staff 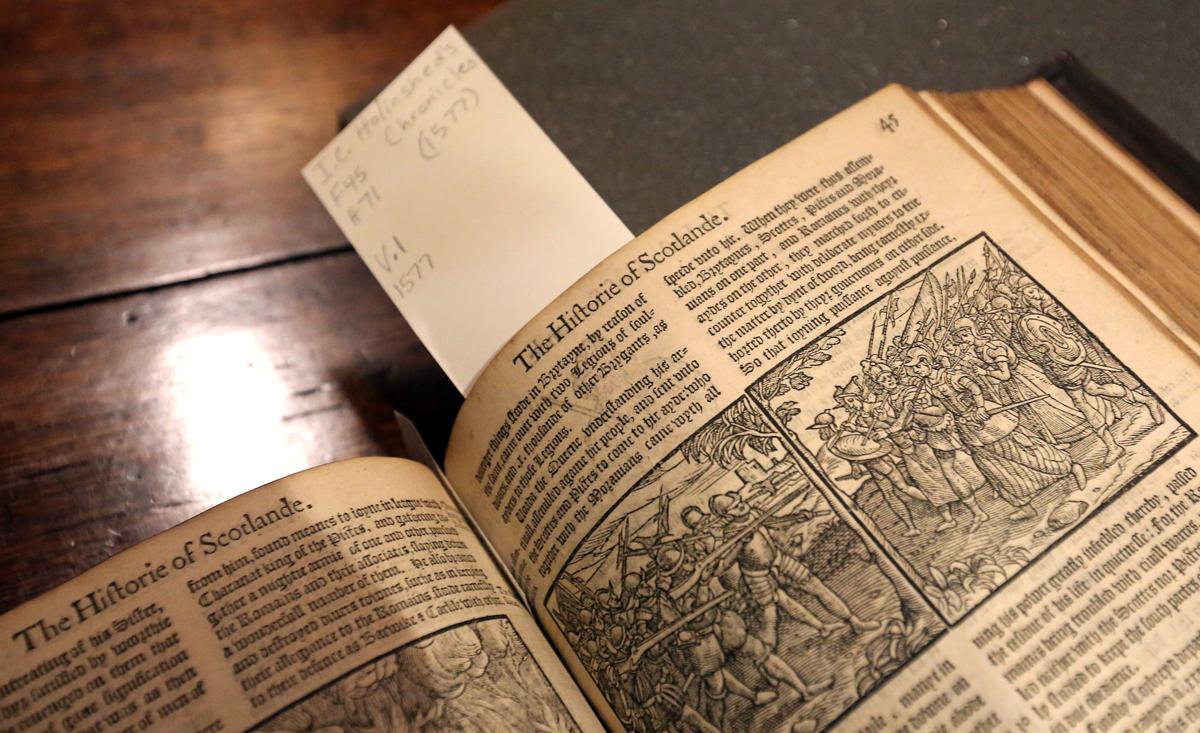 A page in "Holinshed's Chronicles" of 1577, the first narrative history of England, Scotland and Ireland. Brad Nettles/Staff

An old copy of William Shakespeare's "The Tragedy of Hamlet," part of the Charleston Library Society's holdings. Brad Nettles/Staff

Two of the seven portraits hanging in the Charleston Library Society’s brand-new Shakespeare room are of people who eventually lost their heads.

Robert Devreux, second Earl of Essex, was charged with treason and beheaded in 1601 after leading an unsuccessful coup d'etat. Walter Raleigh was beheaded in 1618 to appease the Spanish after his second excursion in search of El Dorado during which his men attacked an outpost, violating a peace treaty.

One is of Edward VI, son of Henry VIII and Jane Seymour, who was crowned king at age 9 and died in 1553 of a lung ailment at age 15. The central portrait is of Lady Katherine Stanhope, Countess of Chesterfield, governess and confidante of Mary, Princess of Orange. She would replace her husband in 1664 as postmaster general of England, the first woman to hold that position.

Ah, those were the days.

These portraits, and a few other objects in the Shakespeare room, provided helpful context, reminding visitors that the Bard of Avon was but a mortal man, albeit an especially talented one. The room is a consequence of Charleston native Skipper Igoe’s support of the Library Society and his obsession with all things Elizabethan.

“The entire collection of books, manuscripts, research materials, etc., from the Igoe Library Foundation are now a part of the Library Society’s collection, thanks to the gift that was finalized in May 2019,” wrote Library Society Director Anne Cleveland in an email. “The gift of over 100 items has enhanced our holdings in a significant way.”

And it has spurred the creation of this dedicated space. Library staff are now working out a plan that simultaneously protects the collection and makes it accessible to the public.

The room is a haven for the expanded number of Shakespearean items in the library’s collection, including a pristine 1632 Second Folio of the complete works, an early publication of the great tragedy “Hamlet,” and two two-volume sets of Raphael Holinshed’s 16th-century “The Chronicles of England, Scotlande, and Irelande.”

Few refer to that big book these days, but the “Holinshed's Chronicles” was the first published narrative history of England and a primary source of information for Shakespeare and other writers of the age, such as Edmund Spenser and Christopher Marlowe.

The Library Society will celebrate Igoe’s patronage and the opening of the Igoe Shakespeare Library with two events, one public and one private, set for 6 p.m. Friday, Feb. 7, and 6 p.m. Saturday, Feb. 8.

Cornwell, a part-time Charleston resident, is the author of novels based on English history and of an actual history of the Waterloo Campaign. His novel “Fools and Mortals” is about Shakespeare’s younger brother. Cornwell is familiar with the stage, too: He has performed Shakespeare at the Monomoy Theatre in Chatham, Mass.

Dromgoole was artistic director of Shakespeare’s Globe in London from 2005 until 2016. He has directed many, perhaps most, of the Bard’s plays. He is the author of “Will and Me: How Shakespeare Took Over My Life” (2006) and “Hamlet Globe to Globe” (2017).

Murray is in charge of casting for The Public Theater’s Free Shakespeare in the Park in New York City, among other theatrical things.

So expect the conversation to be informed.

Conversation at the Library Society on Wednesday morning veered from the texts of the Elizabethan Age to the dearth of Shakespeare productions in Charleston to the power of theater.

Here’s an interesting tidbit: Did you know that Queen Elizabeth, irritated by anything Scottish due to her intense rivalry with Mary, Queen of Scots, had the Scottish history in Holinshed’s grand Chronicles excised? Later, publishers produced “Castrations to Hollingshed,” containing all the Scottish stuff and employing an alternative spelling of the author’s name.

Here’s another tidbit: Did you know that some of the texts to Shakespeare’s plays were pirated, copied with degrees of inaccuracy by actors and other witnesses and sold like contraband? In the theater world, there are people who like to perform the “bad ‘Hamlet’” for kicks. And legitimate publishers would add “An Honest Copy” to the books with authorized texts.

Cleveland said she hopes the Library Society can become a destination for Shakespeare enthusiasts and scholars. The library’s collection includes various works that surely informed the Bard’s creative efforts: Essays by Montaigne, for example, and Ovid’s “Metamorphosis.”

Cromwell noted that letters from a shipwreck survivor who landed at Bermuda provided Shakespeare with ideas for “The Tempest.” Though these letters are not among the items in the library’s collection, they are part of a large array of texts that provided a basis for some of the greatest works of the theater ever produced.

Charleston residents don’t often get a chance to experience Shakespeare on stage, except occasionally when Spoleto Festival brings a production to town.

“People feel very intimidated by Shakespeare, often because when they were young, they didn’t get it,” Murray said. But the themes of his plays are universal and remain relevant today, she added.

“Schools have done a lot to harm him,” Cromwell remarked, referring to the way Shakespeare is taught and presented in student productions. “But he is still one of the most performed playwrights in the Western world.”

And a good production will make evident the human connections between characters and audience members, Murray said. The challenge is to remove the barriers to entry. Attending a theater performance typically costs more than streaming a movie at home. “That’s why Shakespeare in the Park is free,” she said.

It's important to expose children to art when they are young, added Laura Mina, head librarian. “If a child is not exposed at home, it influences what they feel comfortable doing as adults,” she said.

'In love with words'

Hopefully, the Igoe Foundation’s gift will make it possible for people living in the region to encounter Shakespeare and his milieu without making trips to New York City or to Washington, D.C., where the Folger Shakespeare Library is located, said Ann Igoe, who bequeathed her husband’s collection to the Library Society.

“He fell in love with words early on,” she said. “He was a poet himself. He spent his grownup life collecting incunabula, books about Shakespeare, and paintings and things from that age.”

He developed Alzheimer’s before he was able to place his collection, she said. The two logical options were the Library Society and the Folger Library.

“It was up to me to decide,” Igoe said. “I was determined to keep it in South Carolina, and why not Charleston? I grew up in a small town (Darlington), and had I been able to grow up seeing real paintings and whatnot, it would have made a big difference.”

Sam Igoe, Skipper and Ann’s son, helped his father keep the collection in order over the years.

“I didn’t really do that much,” Sam Igoe said. “Dad was pretty much a force in his own right.”

Skipper Igoe would bring a couple of books to the Library Society every now and then and learned to trust the organization, which has a vault, climate-controlled display cases, a book-binding operation and professional staff.

So it makes sense, for many reasons, for the Igoe collection to be housed there, Sam Igoe said.

“He was really proud of his Charleston lineage.”