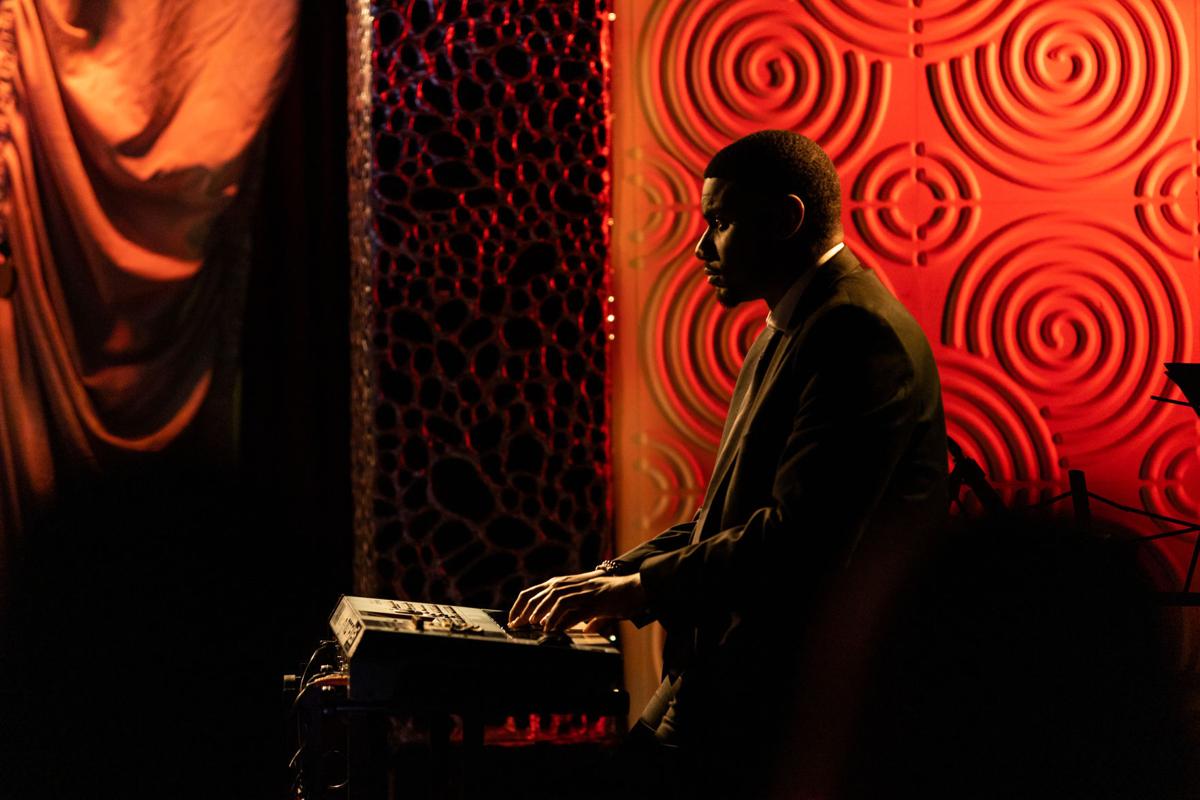 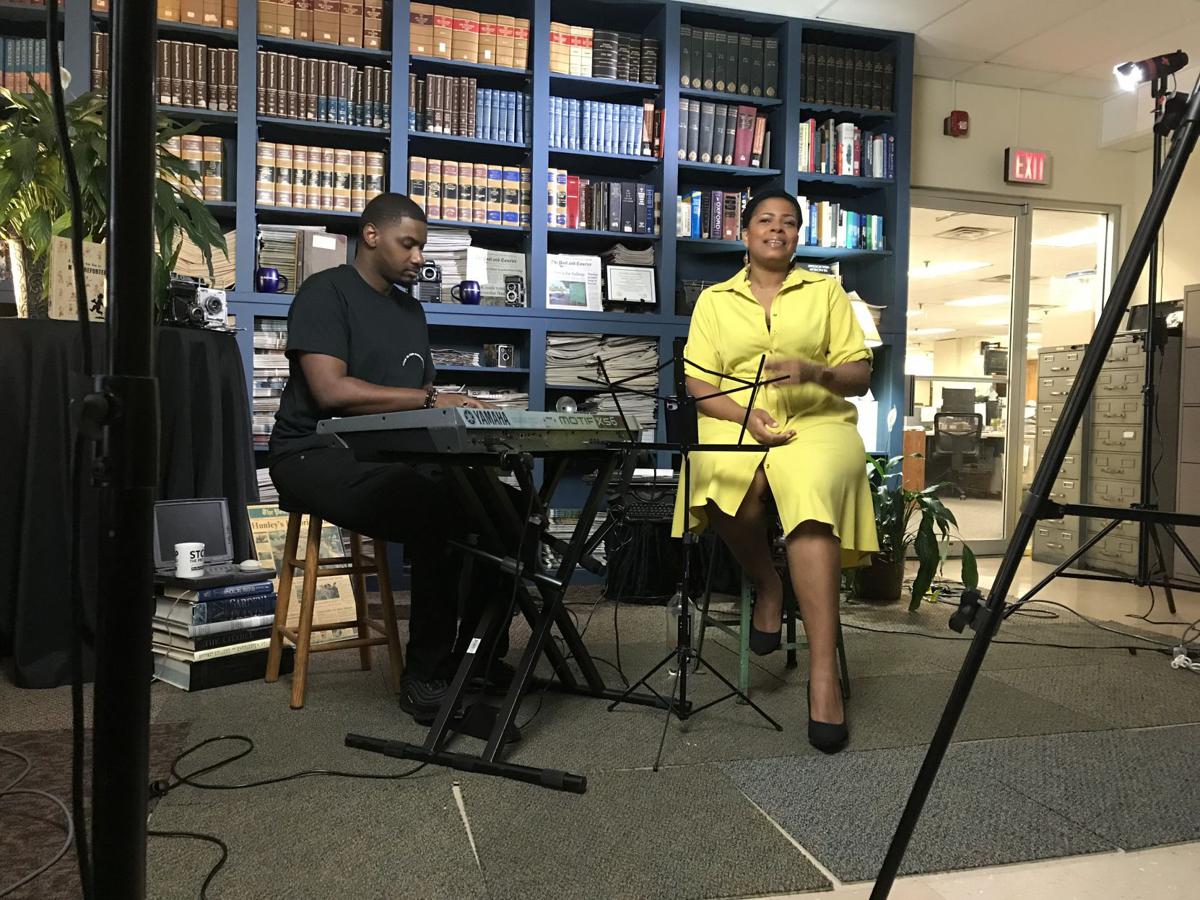 Stephen Washington and Zandrina Dunning perform in the "No Intermission" series. Adam Parker/Staff 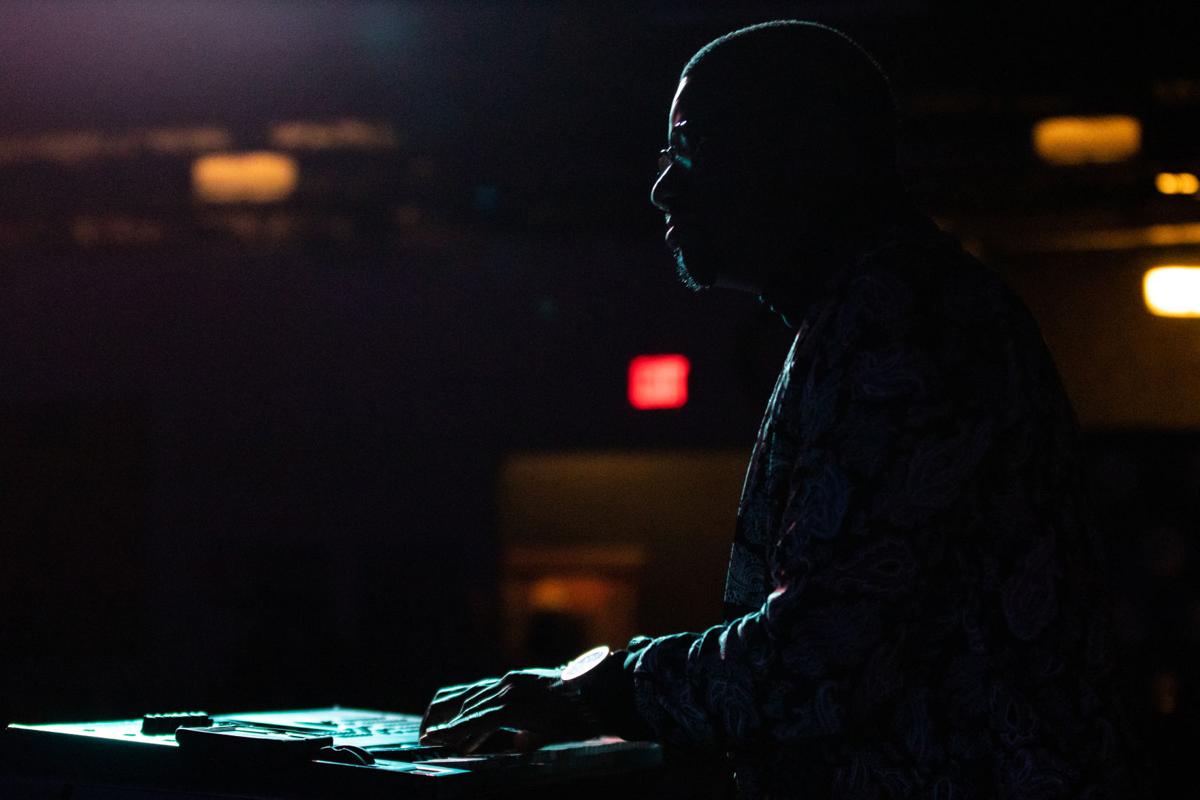 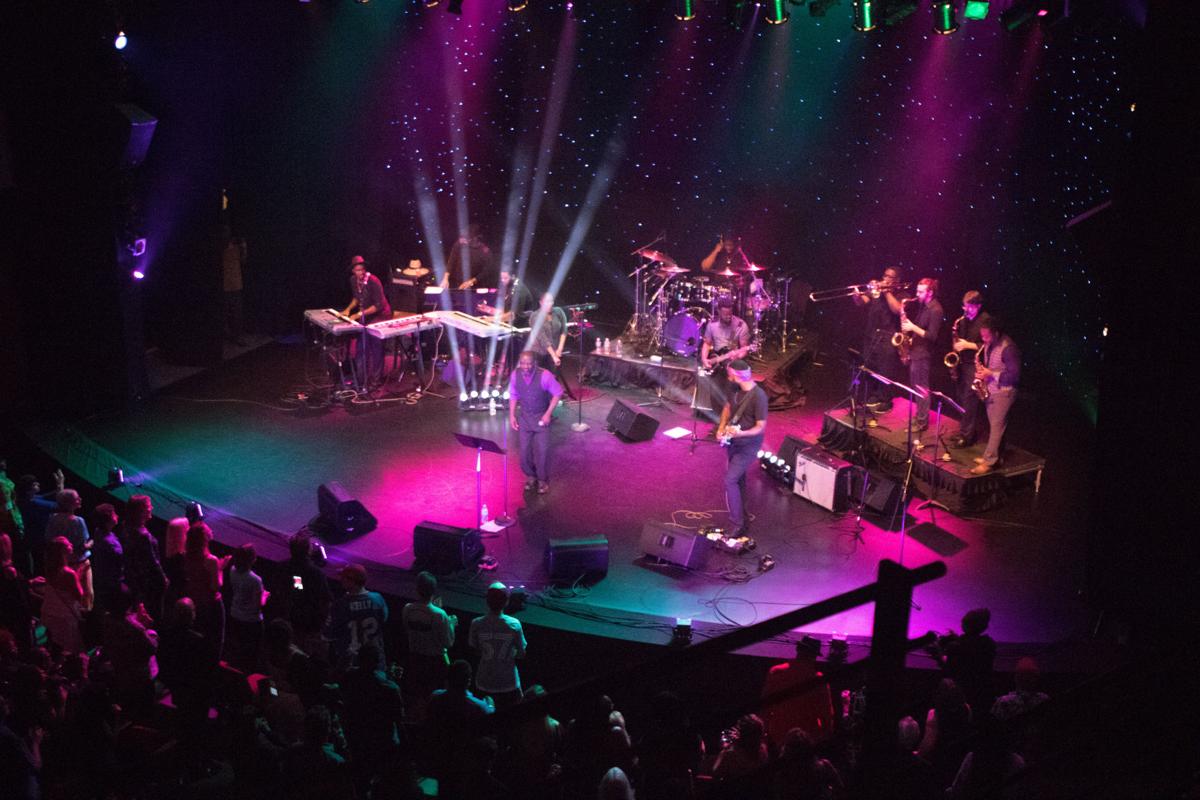 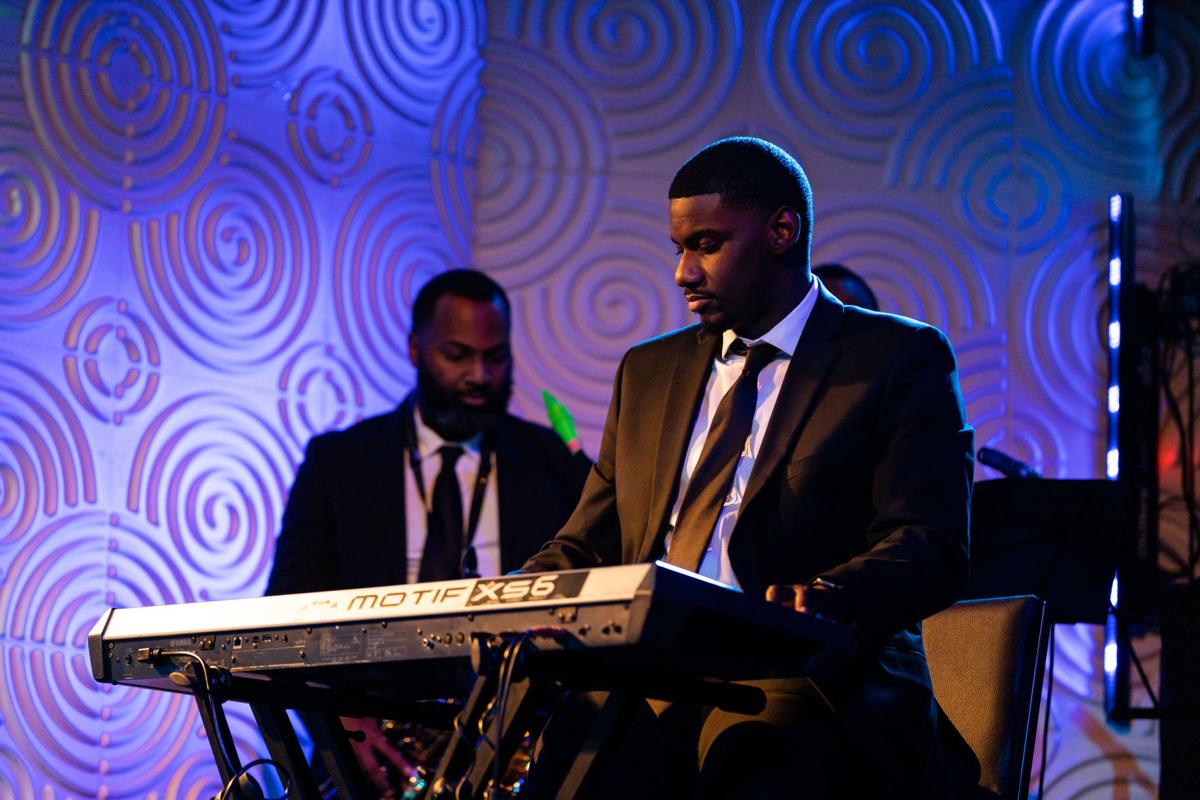 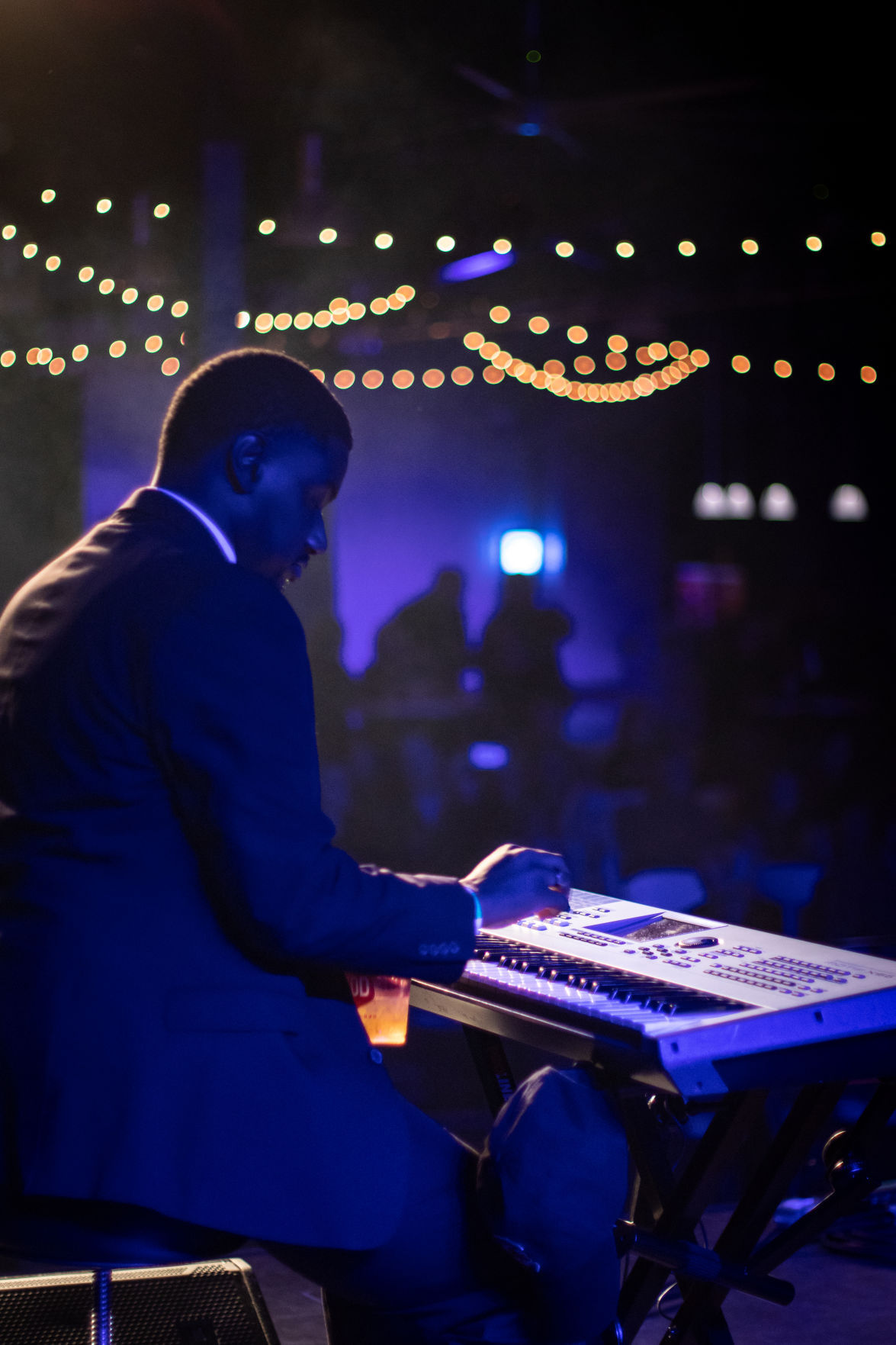 Stephen Washington at The Senate in Columbia. Everett Zuraw/Provided 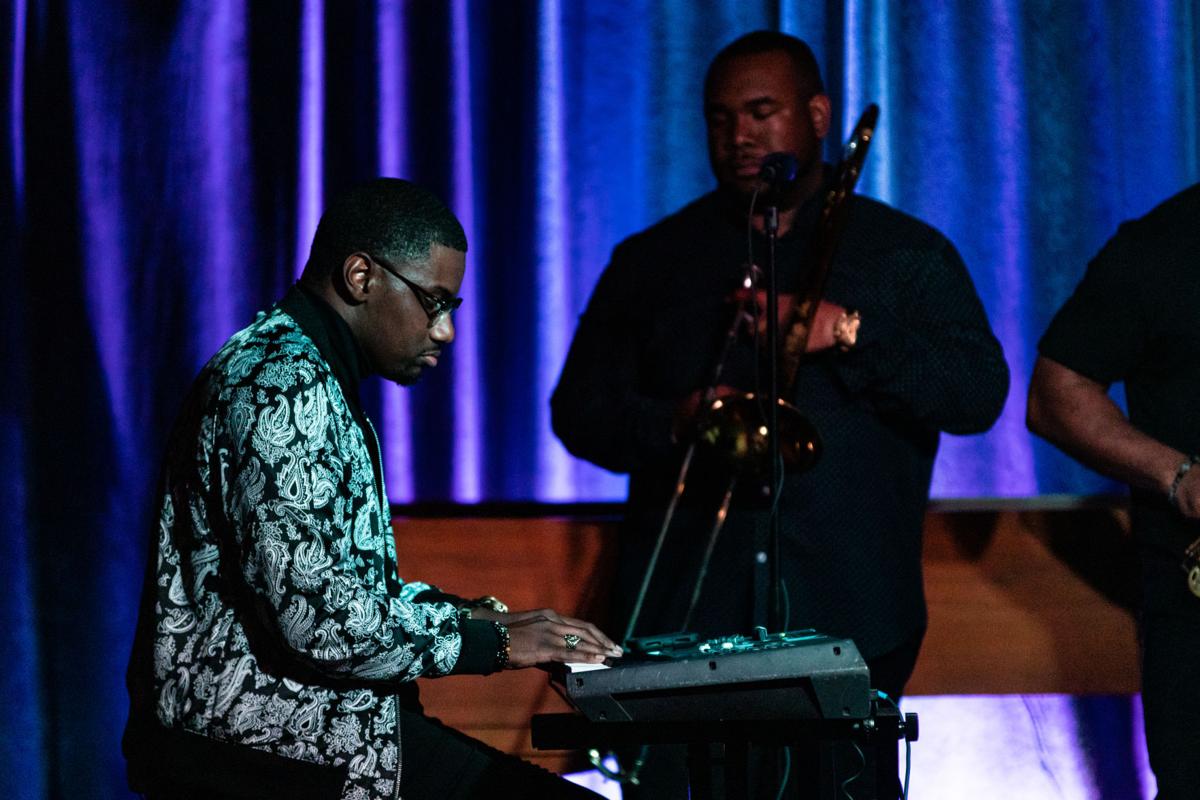 Sometimes talent is hard to describe. We recognize it when we witness it, but struggle to put it into words.

Ask some local musicians about Stephen Washington, and they will burst forth with exclamations such as, “His musicality, his vocabulary, is out of this world” (Calvin Baxter) or “He’s not like any other person I’ve ever played with” (Quiana Parler) or “Stephen is a musical genius” (Jarell Smalls).

You will learn from Washington’s musical colleagues that he possesses nimble keyboard skills, an ability to improvise freely, a multitasking brain, a quiet demeanor and humility. You might be surprised to discover that he is an accomplished drummer and producer. You will hear about the fluidity of his musical direction on stage, his love of all kinds of musical styles and his versatility.

But why exactly is he so good, so unusual? His friend and musical collaborator Charlton Singleton explains it this way:

“One of the first times I performed with Quiana and her party band, we were playing for a wedding reception and we were all wearing in-ear monitors. Stephen, being the music director, had a talk-back mic in addition to a regular one. He would come straight to our ears. ... We get to a song that Quiana has to sing, something that’s come up literally 10 minutes before. Vonny (bass player LaVonta Green) looks over and says, ‘I’m iffy on the song.’ Stephen says he’ll call it out to everybody. He has two keyboards. ... Stephen starts the song, tells JT (drummer JT Rollerson) what to do, then is calling out chords to everybody. That’s fine. Then I look at his hands. He’s playing the chords he’s calling out to everyone with his left hand, and playing a string line with his right hand. But the keyboard on top is transposed. I saw him doing that, using my perfect pitch. I just stood right there and said, 'Damn, that’s some s*** right there.'”

Do you understand? Washington was using his left hand to play the basics of the song on the bottom keyboard, and using his right hand to play a melodic line on a second keyboard tuned to a different key (with the press of a couple of buttons). Think of it this way: If you played a normal C major scale on a keyboard that had been tuned so that C major really was A-flat major, then you’d have to make some serious mental and digital adjustments to play in C major; you’d have to play in what would normally be E major.

OK, never mind, suffice it to say that Washington has a brain that processes disparate pieces of information simultaneously in different parts of his consciousness, and send all the right signals to his fingers and vocal chords. He can talk, play, walk, chew gum and fill in a missing musical line all at the same time.

His musical abilities are inherited and, it turns out, well-suited for pandemic-induced quarantines.

Washington’s paternal grandmother was a singer of blues and gospel. His paternal grandfather was a drummer with regular gigs in town. His father, Clarence Washington, pastor of Jehovah Jireh Family Worship Center in Ravenel, plays keyboards and sings. His mother, Angela Washington, who works in the finance department of the Charleston County School District, also is a pastor at the small rural church. His sister Amber and brother Jeremy are singers.

Stephen grew up immersed in church life. He is among a number of local black musicians who got their start at church, thanks in part to the importance of music within their religious traditions and to the accessibility of instruments, rehearsal space and supportive listeners.

Washington spent his youth in a part of West Ashley not immune from the influences of drugs and gangs, he said. Church provided a buffer, though in his early teens Washington was inclined to befriend everyone, no matter their associations. These were the kids of the neighborhood, his mates. Those middle school years, though, included a degree of angst, Washington recalled. He was rebelling a little.

“I didn’t want that church-boy persona,” he said.

He was also listening to all kinds of music and deciphering it at home on the piano. He was quickly learning about song structure, chord progressions, solo breaks. One Sunday, his father couldn’t be at church, and Stephen figured he could fill in at the keyboard.

“It worked out,” he said, displaying his proclivity for understatement.

He learned more and more through experience and by listening intently to jazz and R&B and gospel and hip-hop and classical and movie music.

Movie music was especially influential, he said. The scores of Hans Zimmer, John Williams and Alan Silvestre taught him about musical storytelling, about foreshadowing, about creating a scene.

As a teenager, he looked up to older musicians in the Lowcountry. He knew drummer Quentin Baxter and his family because of church connections. He watched as Baxter, Charlton Singleton, Kevin Hamilton and Quiana Parler began to gain a footing in the clubs and restaurants downtown. Baxter would sneak Washington into Mitchell’s on the Market to hear live music, then the young disciple would spend hours afterwards trying to replicate the songs.

“We’d go back to church and play till four of five in the morning,” he said. He and his bandmates knew they were safe there, that they wouldn’t bother anyone.

In his 20s, Washington discovered he had perfect pitch. Well, a colleague discovered it. Somebody in the band called for a note, and Washington, without thinking about it, sang it out.

If something, or someone, is out of tune, it rattles his nerves. A note that’s slightly flat or sharp is worse than a wrong note, he said. But this somewhat supernatural ability can be helpful.

“As music director, perfect pitch saves you time trying to guess,” he said. “And it helps you explain things to others. My job as music director is to make sure everyone’s in the car together going in the same direction.”

He graduated from West Ashley High School then attended a Bible college in New Jersey, where he studied religious philosophy.

His musical career heated up soon after that. He has played with Singleton, Parler, Mike Brown, Patrick Davis, Travis Green, Mark Bryan, Zandrina Dunning and others. He said the jazz fusion band The Yellowjackets, and especially Russell Ferrante’s keyboard playing, was a big influence. (“There’s a peace about it,” he said. “It’s intricate, but it makes you feel a certain way.”) Weather Report, too, and Quincy Jones and Bobby McFerrin.

He and Dunning recently performed in The Post and Courier's "No Intermission" series. His producing skills and mastery of multiple instruments means he can sequester himself in a studio and make music during a pandemic.

Parler said she formed her party band 12 years ago after spending a lot of time on the road.

“I wanted to do something more consistent where I could be home with my son,” she said.

She needed a keyboard player, and found the perfect collaborator in Washington. He was solid, experienced, familiar with all kinds of music, quick to learn. The rest of the band was comprised of other excellent players: LaVonta Green on bass, JT Rollerson on drums, Greg Loney on guitar. Parler’s bandmates helped expand the set list to include songs by the Police, Journey and other pop bands of the 1980s.

Parler is astounded by Washington’s brain.

“There was this one time we didn’t have a bass player for a gig, so Stephen played bass on keys, plus he played keys (the regular part), plus he sang.”

“His brain is just different,” she said. “It’s almost reminiscent of Prince. ... He’s not like any other person I’ve ever played with.”

Washington is the also the guy who can fix the car, install an AC unit and troubleshoot a computer, Parler added. And he’ll memorize lyrics faster than anybody, which can be helpful, thanks to that ear-in communications system the band uses.

“I feel most secure when Stephen’s on the gig. ... It’s like a marriage on stage. We all look to Stephen,” she said.

The band members are interrelated by blood, marriage, church and friendship — with each other and with fellow musicians in the community such as Calvin and Quentin Baxter, Demetrius Doctor and Mike Brown.

Born to make a difference

Calvin Baxter said his friend can be elusive. There’s an aura of myth that informs his reputation.

“He’s such an enigma,” Baxter said. “We laugh about it all the time. We never know what’s going through Stephen’s head. We just know him to show up, do the job, and kill the part.”

Man about town: Low-key Calvin Baxter making a name for himself as drummer, producer in Charleston

He always kills the part.

“I think he might be the most talented musician that I know personally, because he can do so much,” Baxter said. “I was in Atlanta recently, and mentioned his name, and musicians there were, 'Whoa.' He’s a big influence across the country, and he’s unaware of it.”

Gospel singer Jarell Smalls is struck by his friend's modesty.

“Typically, you don’t find people with his caliber of gifts so humble,” Smalls said. “With him what you see is what you get.”

Smalls attributes Washington’s humility and authenticity to his devotion to family. He’s at church nearly every Sunday to help his mother and father.

Washington said he's content working in an extraordinary community of Lowcountry musicians, and touring when he can.

“You need an outlet, you’ve got to be able to go, to see and experience (the world),” he said. “But some people were born to make a difference where they are.”