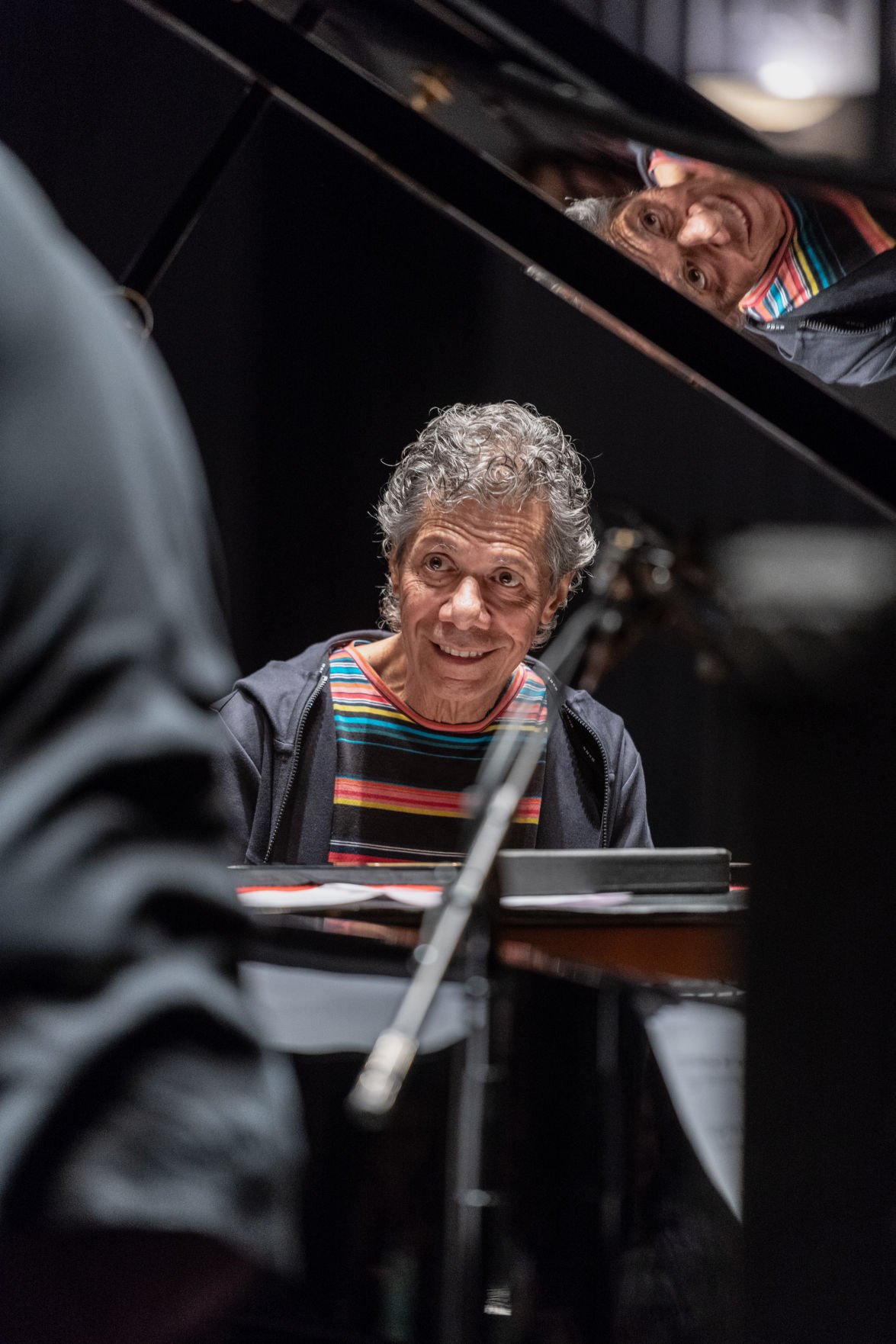 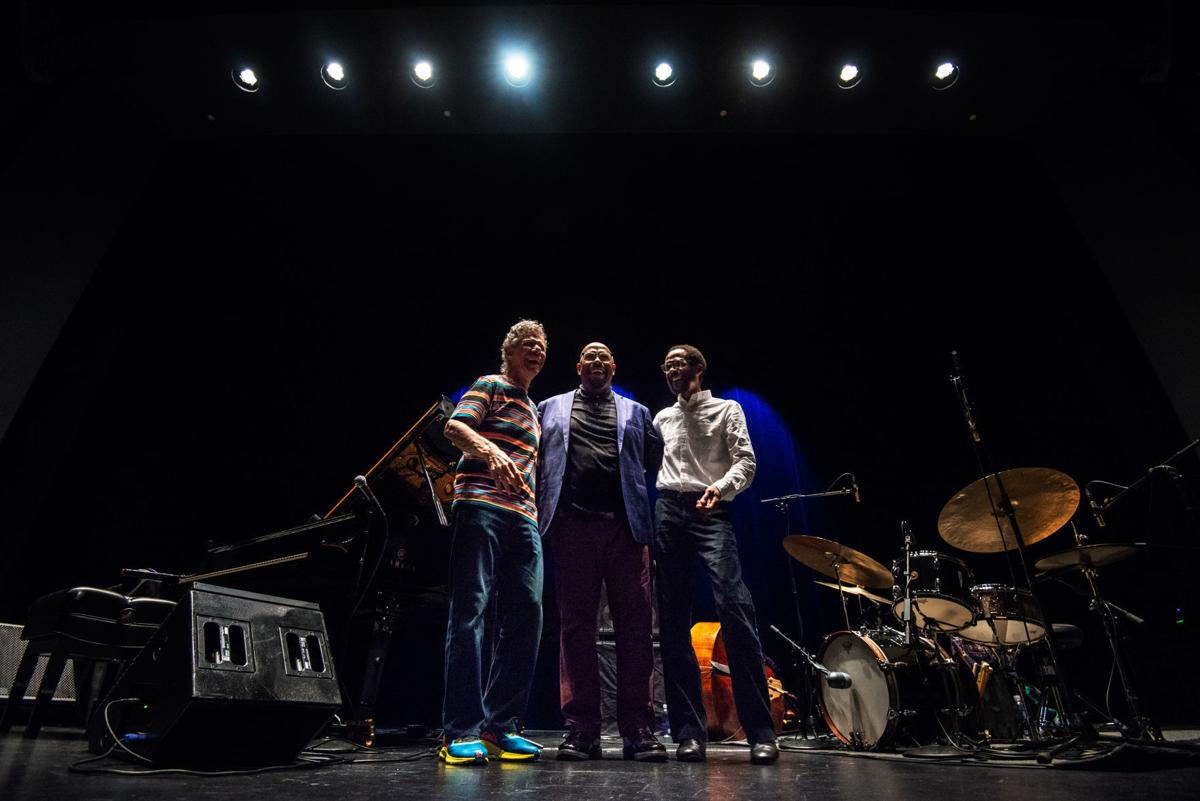 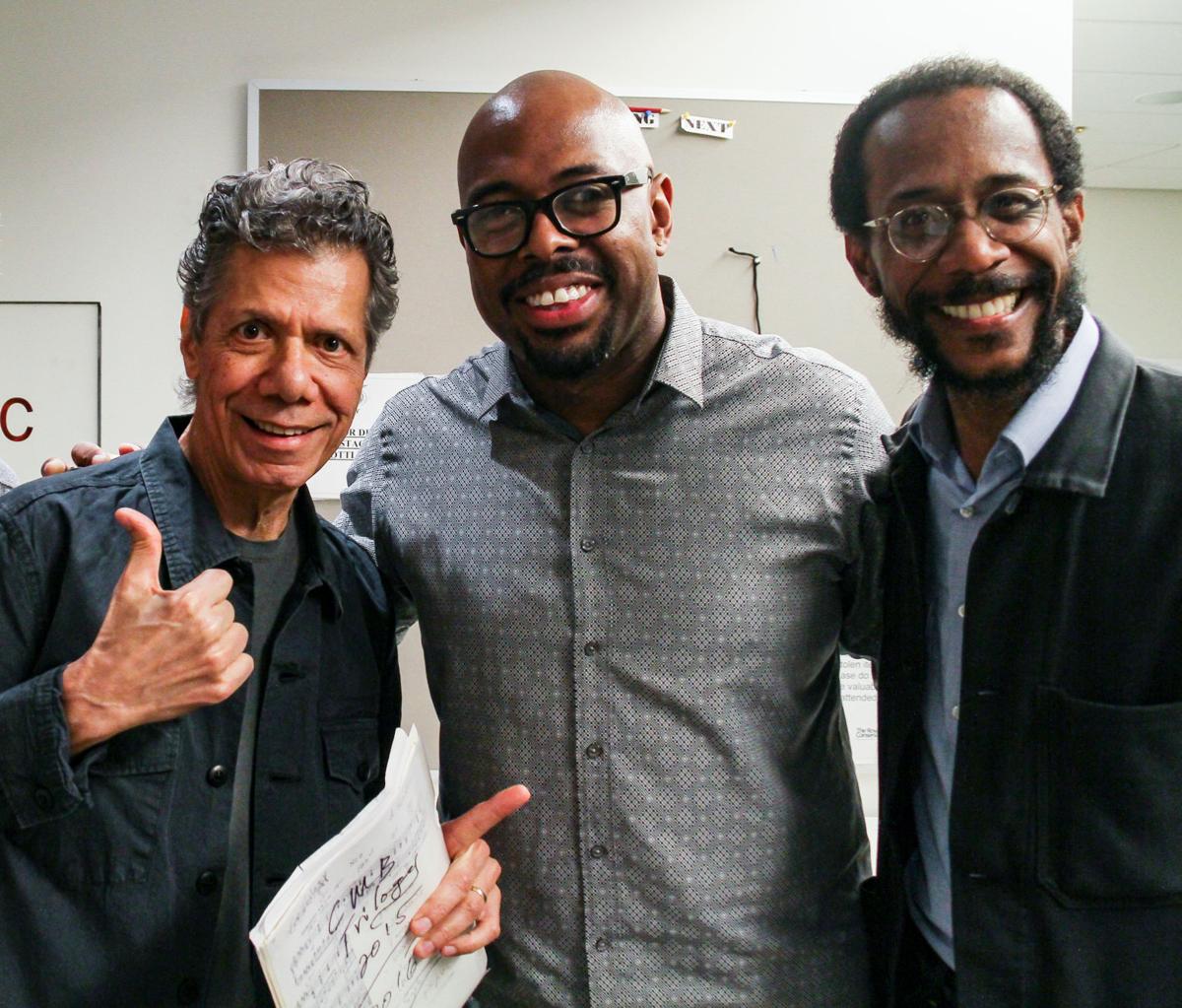 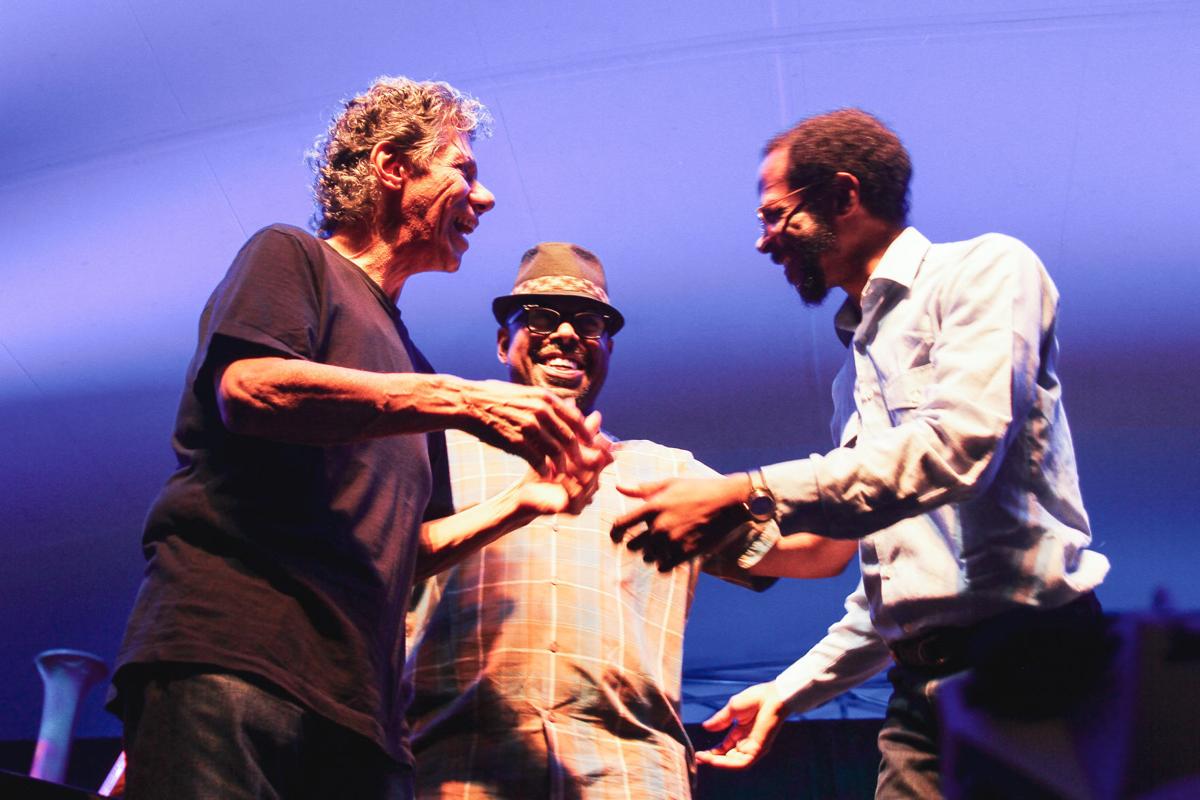 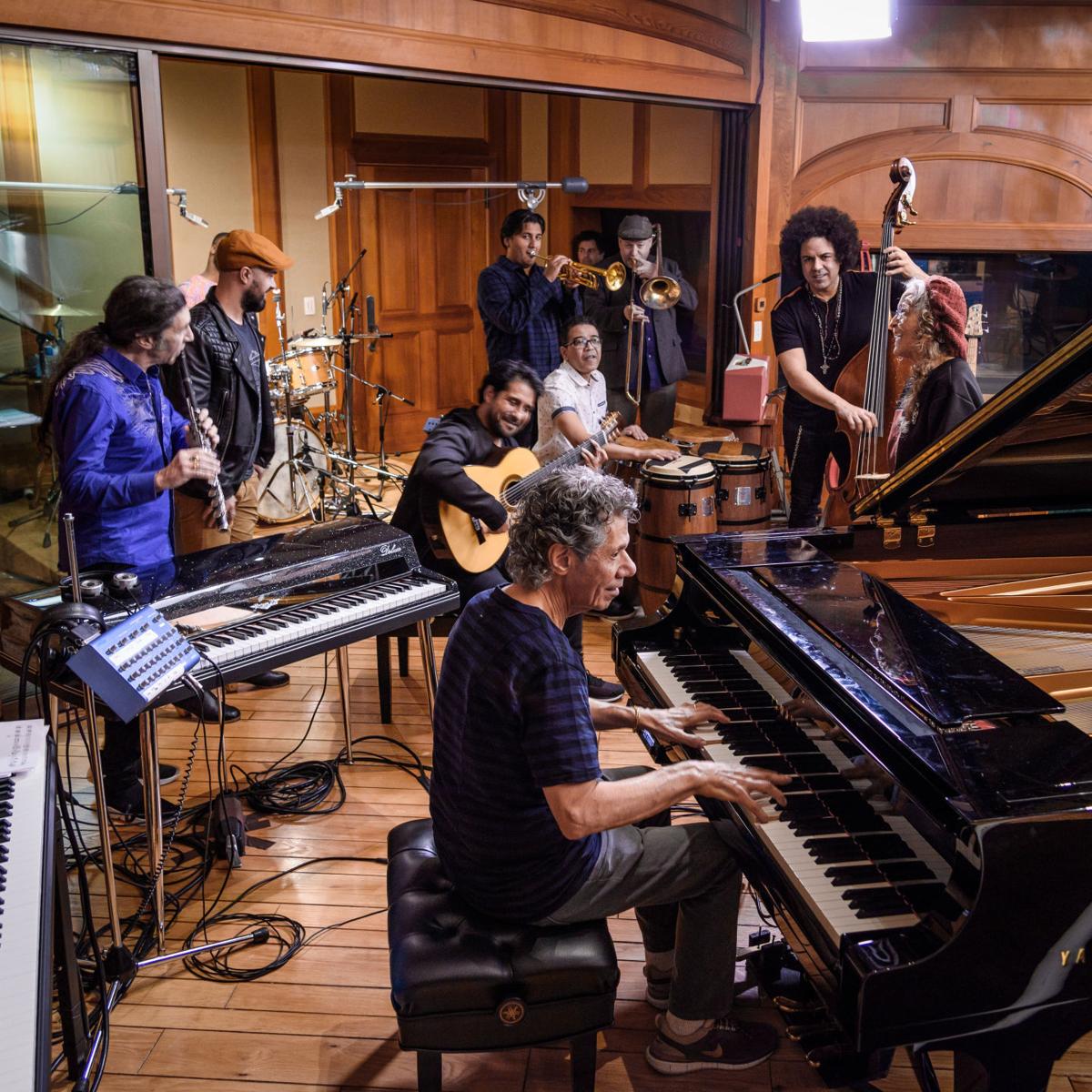 Pianist Chick Corea tours with the creative gusto of a man 50 years younger. Now 78, Corea unquestionably is a grand master of jazz, an idol to whom most young players look for inspiration and knowledge.

Corea's long career is among the most distinguished and expansive of any musician at work in the last century. The milestones are too numerous to catalog here. Suffice it to say that he helped Miles Davis invent jazz fusion, embracing electronic jazz in the 1960s and '70s and propelling the genre into a vibrant new phase of exploration.

A contemporary of, and equal to, Herbie Hancock and Keith Jarrett, he helped elevate jazz (and other styles of music) to new levels with an impeccable combination of impulsive creativity and astounding technique.

He has steadfastly refused to segregate music, rejecting the idea that classical, Latin, jazz, experimental and other styles ought to be assigned to distinct realms. In an effort to satisfy his unquenchable curiosity, he has collaborated with hundreds of musicians, including bassist Stanley Clarke, violinist Jean Luc-Ponty, singer Bobby McFerrin, guitarist John McLaughlin, banjo player Bela Fleck, guitarist John Patitucci, the Orion String Quartet and many others.

In 2014, he released the record “Trilogy,” a 3-CD set featuring bassist Christian McBride and drummer Brian Blade. It won the Grammy for Best Jazz Instrumental Album. Recently, the trio made a second recording, “Trilogy 2,” and now is on tour, with a stop at the Charleston Gaillard Center on Tuesday, Oct. 29.

In anticipation of his concert, The Post and Courier asked Corea a few questions about his career and interests.

Q: You studied classical music when you were very young (which no doubt accounts for your fine technique). What influence did/does classical music have on you as a performer and composer?

A: I have always been inspired by the classical composers, especially Bartok, Stravinsky, Scriabin, Scarlatti and Mozart. I took close notice of their orchestration and how they wrote for the piano. I think Mozart and Scarlatti were very good improvisers.

Q: Horace Silver and Bud Powell were pianists who meant a lot to you, especially early in your career. What did you learn from them?

Q: Under what circumstances do you best thrive musically?

A: Being a musician is a life — or it can be. It’s been mine. I thrive on the interaction and co-creation with other like-minded musicians and audiences who want to listen and experience what we do.

Q: During the course of your career you have embraced opportunities to play with well-established musicians, many of whom found fame in esteemed bands of the past, and with young or emerging artists. Have there been any projects that just did not come together well?

A: Everyone has ups and downs. Nothing ever remains the same. Wins and losses are part of life. I tend to ignore the losses and try to strengthen the pluses. That approach seems to work well for me.

Q: An example of a successful collaboration is the group you are touring with now, a trio featuring you, bassist Christian McBride and drummer Brian Blade. What is so special about the musical chemistry of this band?

A: Both Christian and Brian are uniquely gifted as musicians and creators. We have fun playing together and I get to learn from them every night when we’re on tour. It just clicks each time we hit it. I can’t explain that: magic maybe.

Q: What’s the next project? What are you working on?

A: I have few other projects cooking, as do Brian and Christian. We like to keep busy making music in many different ways. I’m currently engaged in composing a trombone concerto for Joe Alessi and the New York Philharmonic Orchestra. Joe is an amazing trombonist and has been the principle trombonist for the NYP for more than 30 years. This is a very exciting project for me as a composer, as you can imagine. I’m also planning several tours with my newly formed Spanish Heart Band.

Q: When you are not performing music, what do you like to listen to these days? Have any particular artists caught your fancy?

A: I’ve been spending my listening time studying the scores of my two favorite orchestrators and composer of orchestral music: Bela Bartok and Igor Stravinsky. Bartok’s “Concerto For Orchestra” is an amazing and magical piece of music. And Stravinsky’s "Le Basier de la Fée" is a gorgeous ballet he wrote inspired by ... Tchaikovsky. These pieces have kept me pretty busy these days.

WHAT: Chick Corea Trilogy, with Christian McBride and Brian Blade